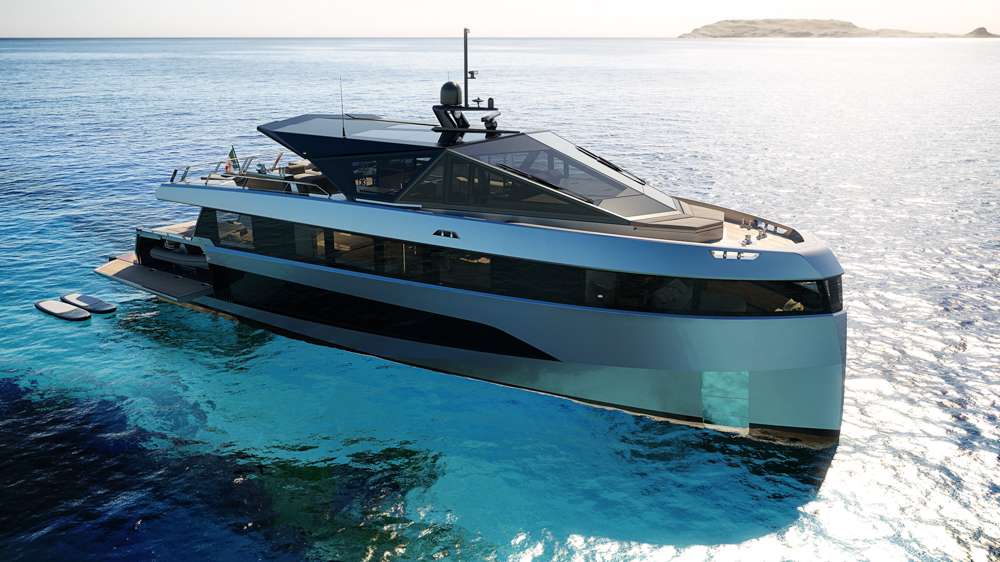 Wally’s futuristic-looking 27-metre WHY200 provides a ground-breaking owner’s suite while offering more living space than traditional yachts of its length. Wally, a part of the Ferretti Group, is known for its eccentric, space-aged yacht designs and radical rethinks on superyacht style. Wally officially joined Ferretti in January 2019.

“We have had a longstanding vision to create a wrap-around main deck in glass that would provide so many lifestyle benefits to the owner and now finally the technology has made this possible, unlocking game-changing extra interior volume on this deck,” said Luca Bassani, Wally founder and chief designer. The WHY200 has a 37-square metre owner’s suite located right at the bow. 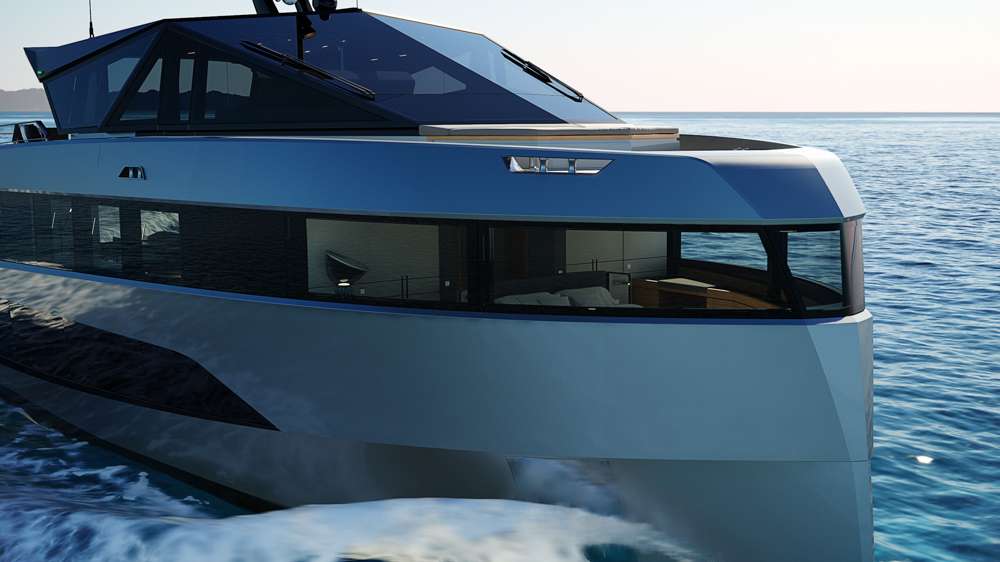 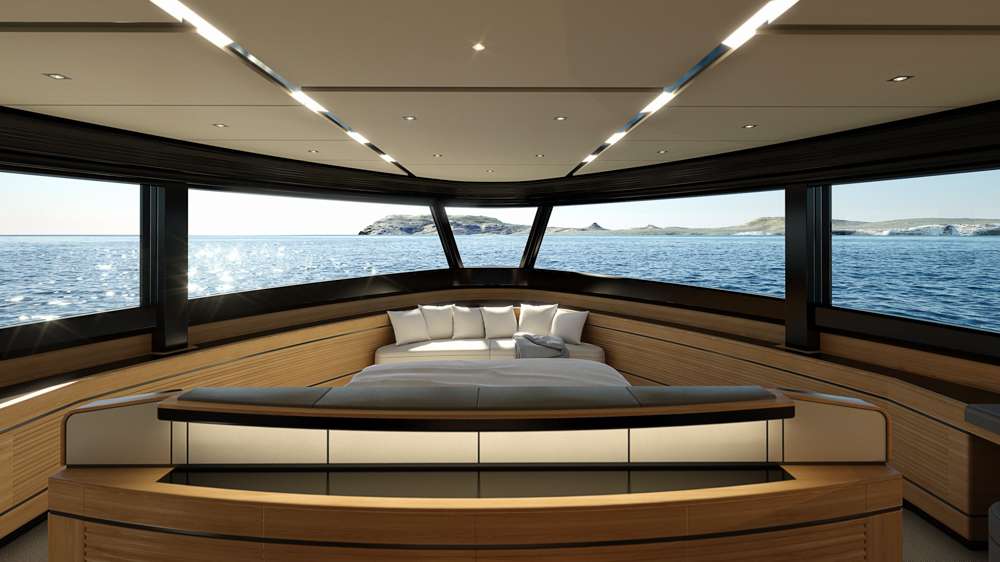 “Imagine the feeling of waking up to uninterrupted 200-degree views through vast windows in the bow, as if you are floating above the water. It is a genuine marvel to behold; we are especially proud of what has been achieved with this revolutionary layout,” Bassani said.

Wally, working with Ferretti’s engineering team, has developed a yacht for the “compact superyacht market”, which measures 200 gross tonnage and is registered under 24 metres, but that has the space of a larger displacement boat and the speed advantages of a semi-displacement boat.

“Through the WHY200, we are challenging preconceived notions of what a yacht should be and how it can be used. It is a platform that can be enjoyed by the whole family or groups of friends, without compromise,” said Stefano de Vivo, Wally Managing Director. He added that by keeping the yacht registration under 24 metres at load line, running and berthing costs can be kept down while still providing significant space and volume thanks to its wide-body design. 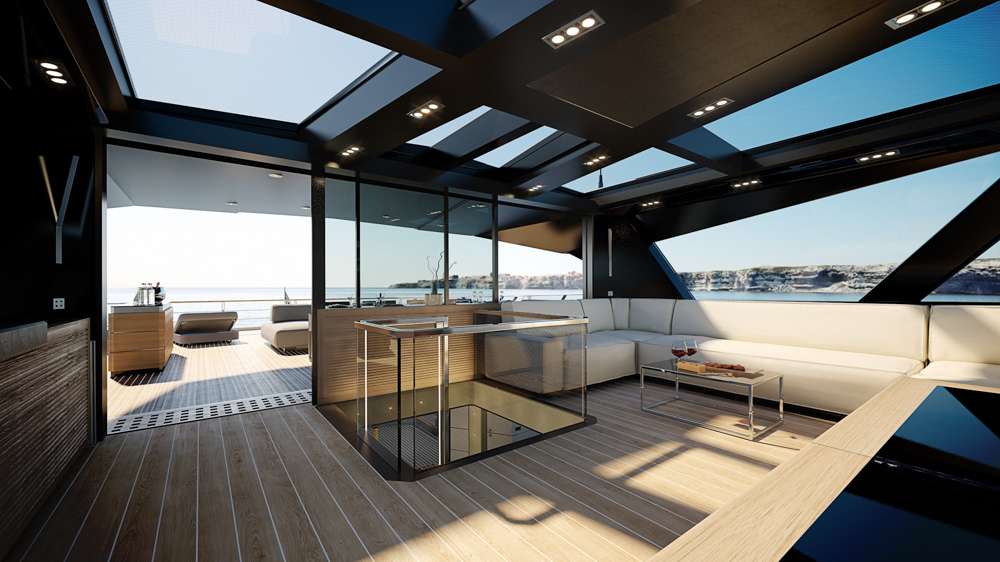 By incorporating the space normally used for exterior walkways into the full-beam salon, the WHY200’s 61-square-metre, open-plan living area increased the main salon space by 50% compared to similar sized yachts, according to Ferretti Group. Overall, the WHY200 has more than 200 square metres of indoor living space. Access to the foredeck is via the bridge deck.

The lower deck can have three or four double guest cabins, but the crew and service quarters have the largest capacity in its class, with a galley and three cabins for up to five crew members spread over 32 square metres.

The exterior decks, covering 144 square metres, provide open, unobstructed views while being sheltered from the elements, thanks to a large, pillarless overhang, which also extends the upper deck. Fold-out wings at the aft deck create a large beach club area covering 32 square metres, with access to the water on three sides. There are two concealed tender and toy garages, capable of storing a four-metre tender and watertoys.

Wally has also tried to create a new performance standard with the WHY200, noting that today’s yacht owners may not be satisfied with the slow speeds of full displacement boats or the high speed, high consumption performance of planing yachts. The yacht will use Volvo’s pod propulsion system. 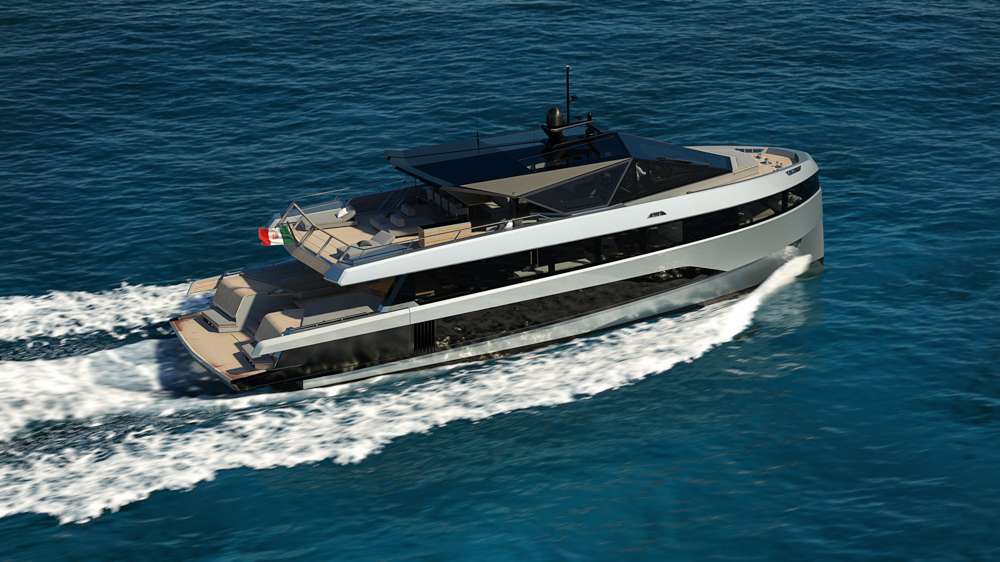 The WHY200 has been optimised for full- and semi-displacement cruising. Combining its naval architecture with an “adaptive, multi-propulsion system”, the WHY200 was designed to cruise at 20 knots in “hyper displacement mode”, while still running economically in a long-range, displacement mode. Guests spend most of their time on a yacht when it is at anchor, so the designers are using the beamy hull combined with fin and gyroscopic stabilisers to keep the yacht very steady.

The WHY200 will debut at the Ferretti Group Private Preview in Monaco at the beginning of September 2021. Ferretti is represented in Asia by Ferretti Group Asia Pacific, which enjoyed strong sales in 2020.