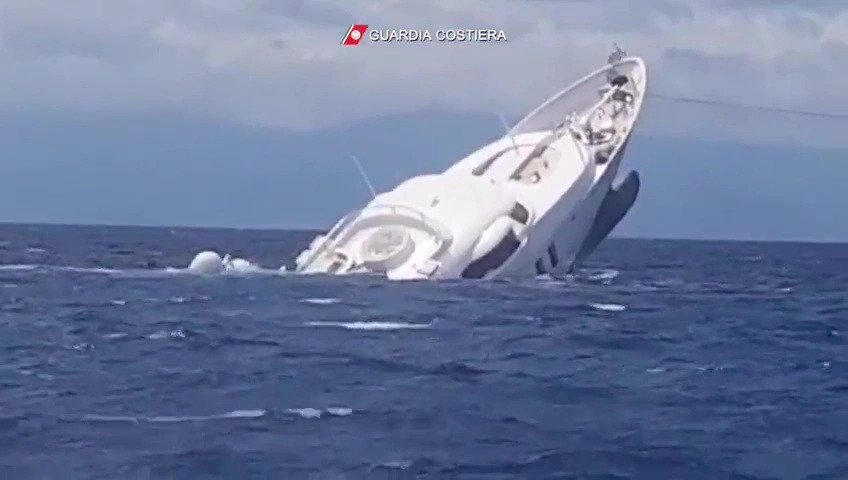 A superyacht sunk off the coast of northern Italy, after the crew reported the vessel taking on water at the stern.

Dramatic footage of the scene shared by the coast guard shows the 39.4-metre superyacht MY Saga tilting heavily to starboard, as the waves crash against the decks.

Reports say the incident occurred around eight nautical miles from Catanzaro Marina in the Gulf of Squillace. Everyone on board has been safely rescued from the vessel with no injuries reported.

The sinking comes after the crew reported taking on water via the stern in the early hours of August 20 (Saturday). The crew were evacuated and a tug was in the process of towing Saga to Crotone when the yacht sank, at around 1pm Italian time.

A statement issued by the Italian Coast Guard says that worsening weather conditions and the angle of the yacht’s incline made it challenging for the tug boat to bring Saga to port.

The area where the yacht sank is believed to be around 200 metres deep.

Marine traffic data indicates the yacht had been attempting to travel between Gallipoli in Turkey to Milazzo on the northern coast of Sicily when the sinking took place.

Originally delivered in 2007 as Yuko, MY Saga was built by now-defunct shipyard Cantieri San Marco, and designed by Tim Heywood. The yacht, which sailed under the Cayman Islands flag, had a range of up to 4,606 nautical miles could accommodate up to 12 guests in six staterooms, with eight crew members.

An investigation into the incident will take place in the coming weeks.