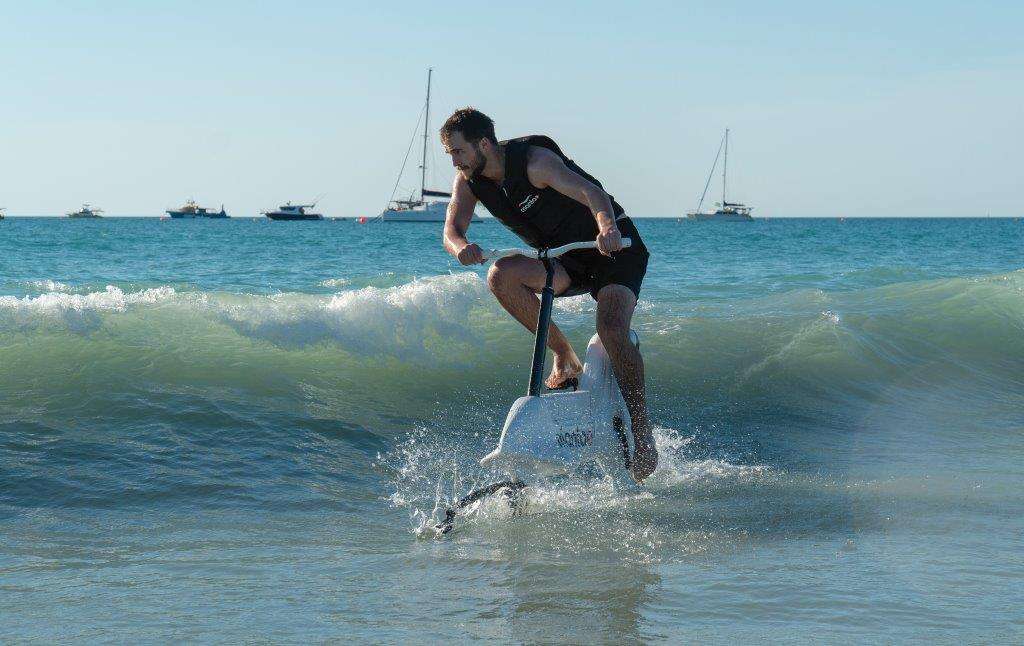 Foils may be breaking new frontiers – increasing efficiency in cruising yachts or powering up kiteboards and surfboards as never before – but in the world of the tender foils have, so far, failed to take flight.

Two innovative products, however, are changing all that.

The Manta5 Hydrofoiler XE-1 from New Zealand and the Overboat from France are showing that the foil can be adapted to just about any type of water-borne vessel and the applications are only limited by the imagination of the product designers.

The Manta5 Hydrofoiler XE-1 launched its amazing pedal-powered product onto the market in 2020 and went viral after trending at the CES Las Vegas 2020 exhibition. Half e-bike, half plane, riders use foiling technology similar to that on America’s Cup sailboats to fly across the surface of the water. 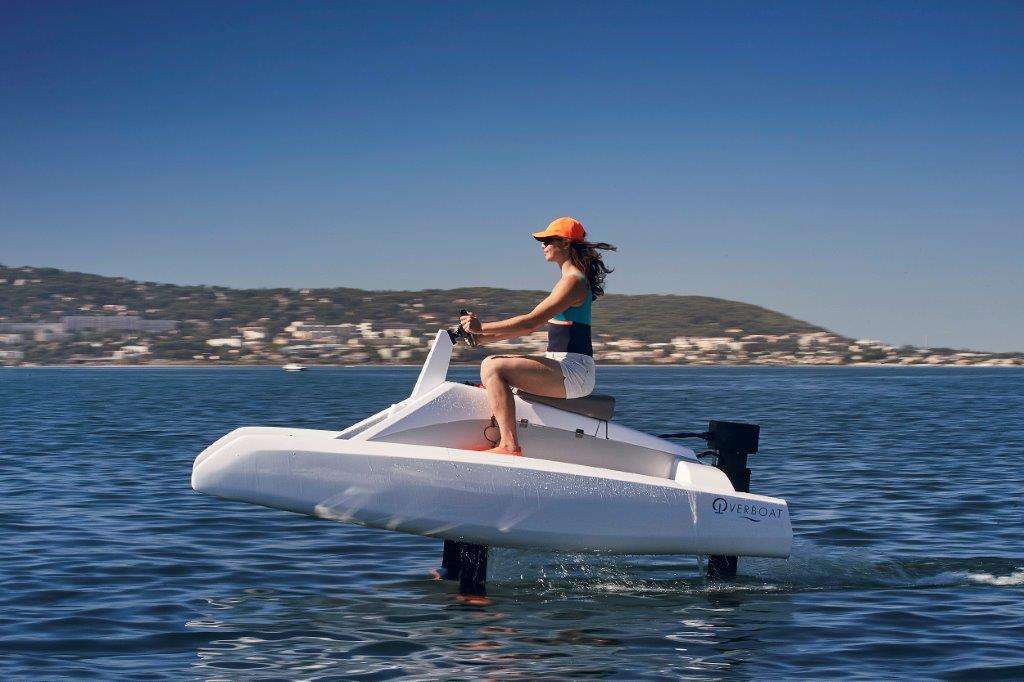 Founded by Guy Howard-Willis and brought to life by bicycle designer, Roland Alonzo, the concept was a secret between them and their wives for the first two years.

“This way if it didn’t work, they didn’t have to explain it to friends and extended family,” a company spokesman told APB.

While the concept of a foiling bike was simple on paper, it took some of the best engineering minds and years of commitment to turn hydrofoil cycling into a reality.

What the design team needed from the hydrofoil bike was all the advantages of a bicycle – lightweight, modular and serviceable – but in the form of a hydrofoil. An intuitive ride experience and successful relaunch capability eluded the pair to the point that they nearly gave up.

If it’s competitive, it’ll fit into a whole different market. Who knows, one day it might be in the Olympic Games – Guy Howard-Willis 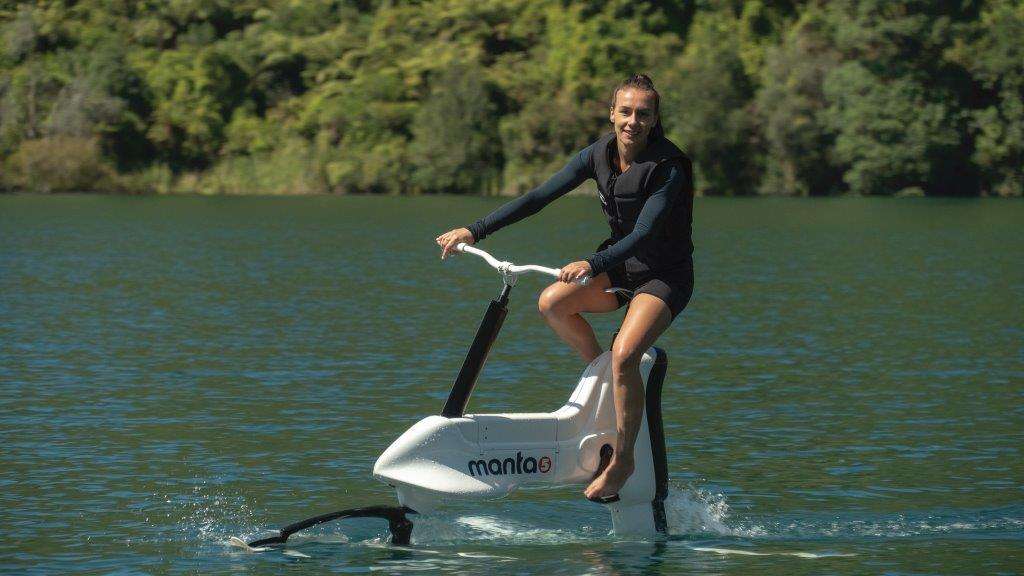 Along the way, they were joined by a team of leading aeronautical, mechanical and electronic engineers who helped them design a hydrofoiler that was faster and more stable. Most importantly, however, they developed its ability to achieve deep water submerged launches which was a world first.

The current XE-1 model, the company says, is the most mobile personal watercraft on the market today. Featuring compact storage and quick disassembly for in-car transportation, re-assembly for foiling takes only a few minutes using simple Allen keys. They estimate that riders can go from a dead stop to foiling in just 15 pedal strokes.

Featuring a custom IPX8 brushless, silent motor and custom e-bike battery, riders can select the intensity of their cycling experience as they switch between the 7 levels of electric assist. Those who want to cruise on the higher levels can expect 1.5-2 hours of ride time on a single battery charge. Cycling on the lower assistance levels provides a full-on cardio workout that can last up to 4 hours.

If you can make the distance, you’ll be able to share your riding stats such as speed, battery and assist level, cadence and much more via Bluetooth connectivity.

The team are planning on making a world record by cycling the Cook Strait (the 29km channel between the North and South Island of New Zealand) this year. 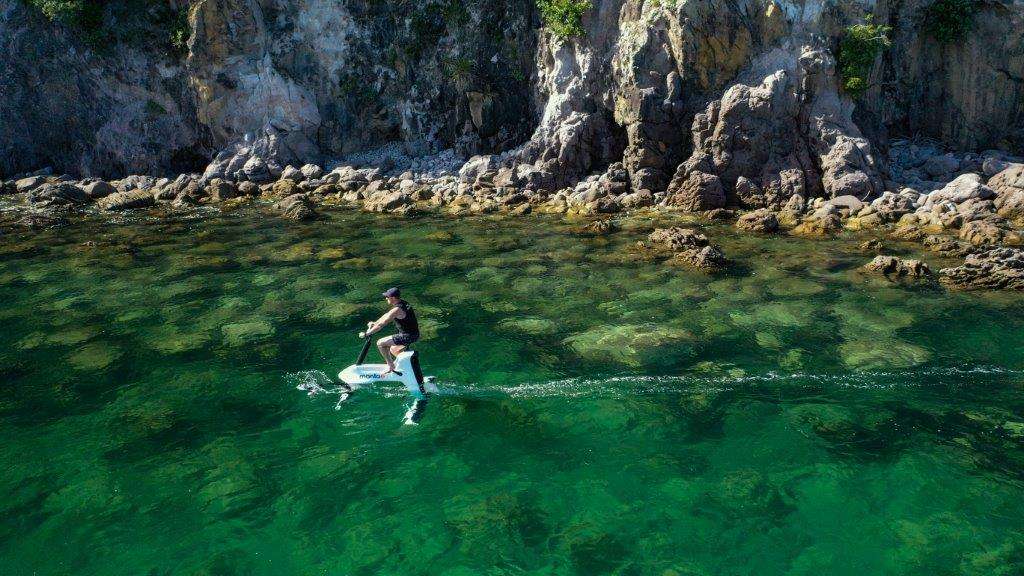 With the product now in-market and having scaled for mass production, the future for Manta5 Hydrofoilers is bright.

“If it’s competitive, it’ll fit into a whole different market,” says Guy Howard-Willis, Manta5 Founder. “Who knows, one day it might be in the Olympic Games. “I can see that it may take a while to get there, maybe I’m too ambitious, but I’ve always been a dreamer.”

Plans are already underway for a model designed for use in the surf, a touring version, and a more lightweight all-manual model that will be aimed at more athletic riders with the focus on developing competitive racing.

The other tender taking foils into uncharted waters is The Overboat – an electric catamaran equipped with four foils that are automatically regulated and retractable and designed to sail in shallow water.

This innovative boat has extremely low operating costs – a few cents worth of mains charging is all that’s needed – to give riders the sensation of silently flying over the water. 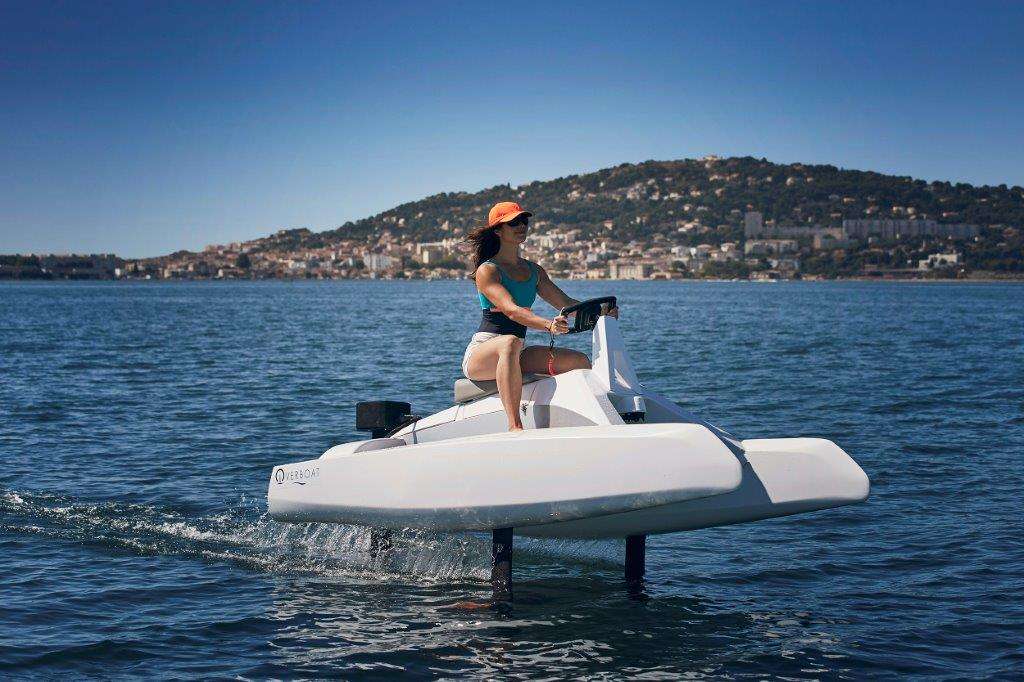 The Overboat has been designed for a wide audience and it’s hoped that its appeal will extend to the professional sectors of the leisure industry i.e. retailers of yacht water toys, luxury hotel chains and holiday clubs, motorboat rental companies that want a toy that can deliver thrills with very low operating costs.

The company also says that the Overboat is also aimed sea professionals: managers of marine protected areas and port managers.

The Overboat is the brainchild of oceanographer Vincent Dufour who led a team of hydrodynamic, electronic and robotic experts over the past 3 years to develop the watercraft he first envisaged back in 2012. What he was looking for was a new way of boating that doesn’t pollute or disturb marine life.

“This watercraft is both environmentally green and quiet and provides the most amazing sensation of gliding on water,” a company spokeswoman told APB. “Equipped with the latest controlled hydrofoil technologies and innovative electric propulsion, it is as smart as it is peaceful, and its goal is nothing less than to allow everyone to ‘fly above the water’ without fossil fuel noise and pollution.”

In 2019, The Overboat was named France’s best electric boat, as awarded by the French Electric Boats Association (AFBE), and in 2020 won the Solar Impulse efficient solution label. The Overboat allows for stabilised flight thanks to its four electronically controlled hydrofoils and retractable hydrofoils that can be used in shallow waters. It has a top speed of 15 knots and a take-off speed of 7.5 knots.

With a direct drive and high-efficiency motor, it has a life of 2 hours at 11 knots through its 70Ah, 48V batteries. Currently available as a single-seater, the Overboat does not require a sailing licence of any sort.