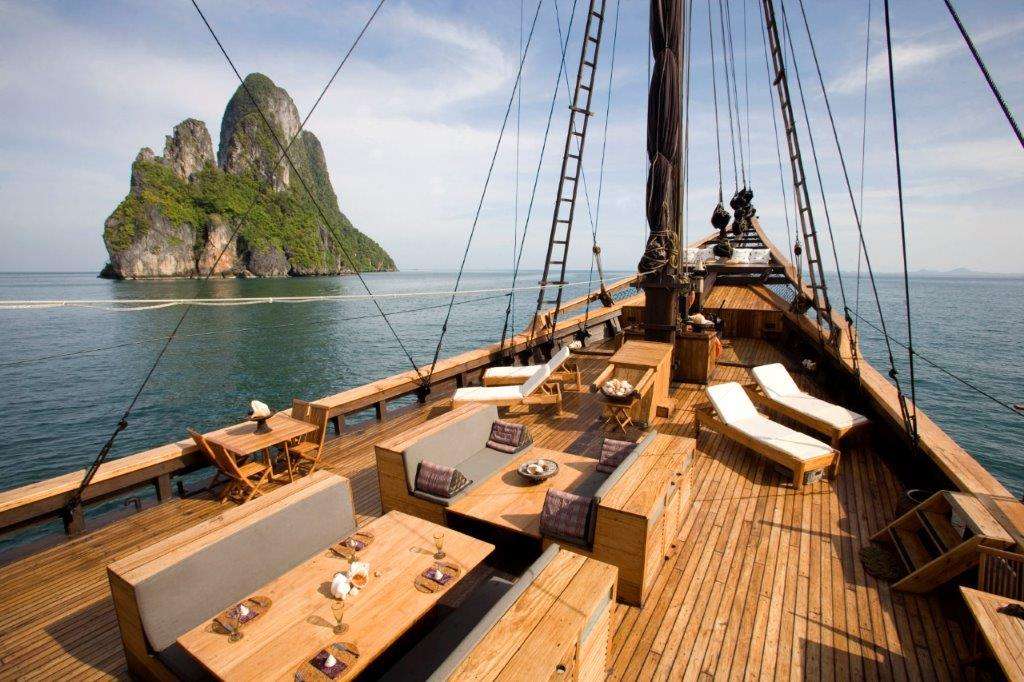 In our age of plastics and throwaway smartphones, we treasure wood. It is humanity’s original building material. To see things built in superbly finished solid wood feels more than luxurious.

For boaters and boat enthusiasts who want to explore amazing destinations by wooden boat, there is Indonesia’s charter scene. Thanks to restrictions on yacht charter in Indonesia, there are precious few ways for people to explore Indonesia’s remote islands and private bays.

The Phinisi was originally a workboat that plied Indonesian waters and, the more remote islands of that vast archipelago. It is often said that Phinisi boats are built by the famed Konjo Boat Builders of Sulawesi, as though there is a shipyard in Sulawesi. 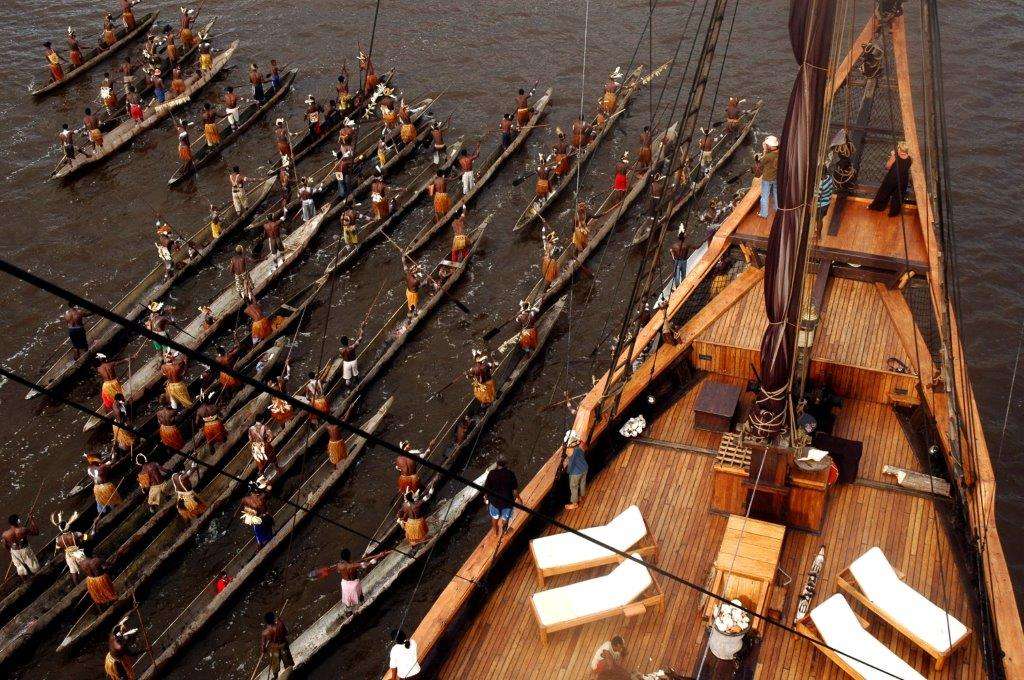 In fact, Phinisis are built on a beach near Bira, Sulawesi, where the keel-laying ceremony often involves dropping chicken blood on the keel; it is said that this will satisfy the need for blood and prevent accidents at the worksite. Using hand tools or simple power tools, the boat builders at Bira work largely as they have done for centuries, constructing massive boats with little more than makeshift scaffolding.

After the hull and deck is completed, a semi-finished Phinisi is muscled into the water. From Bira, it will travel to Bali for finishing. There, workmen can add the creature comforts and engineering while artisans add the flourishes that make a Phinisi into a deluxe treatment. 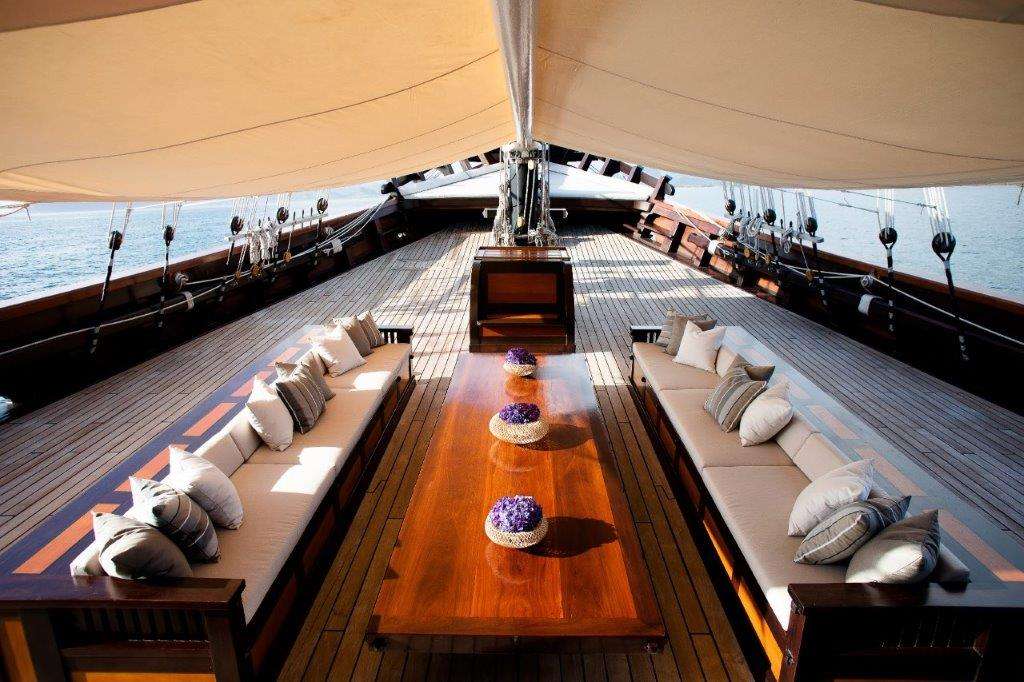 Most Phinisis are crewed almost entirely by Indonesian people, guaranteeing local knowledge, insight into dive sites, and access to traditional foods and cuisines. It also makes the experience more fun for kids, who are often spoiled by indulgent staff.

The boat builders at Bira work largely as they have done for centuries, constructing massive boats with little more than makeshift scaffolding

Given the incredible dive sites and natural phenomena of Indonesia, most Phinisis offer dive services of some kind, with the best including PADI instructors and dive guides. To respect the local conditions, single-use plastics are often banned onboard Indonesia’s Phinisi fleet. 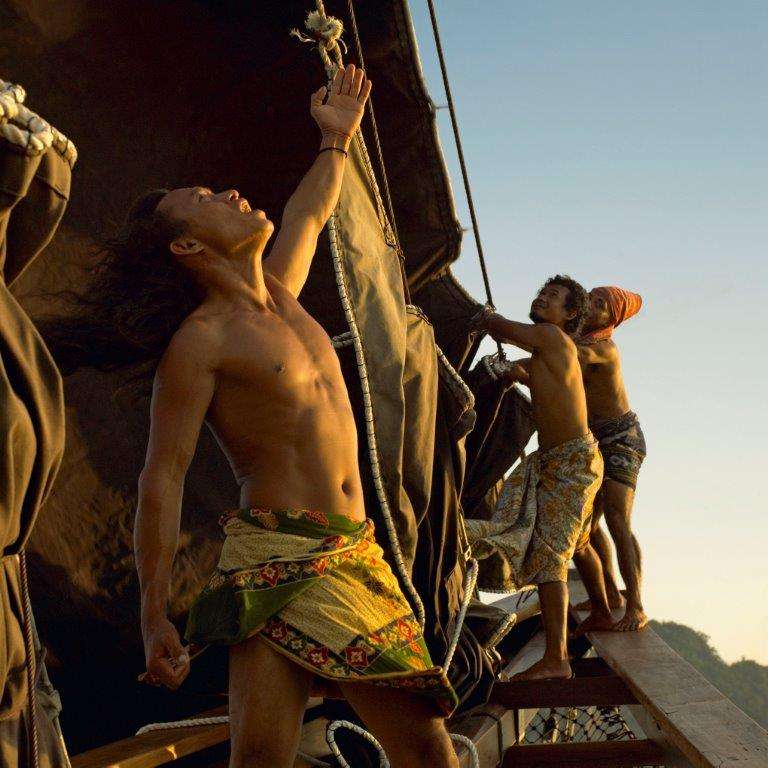 In 2004, Patti Seery launched Silolona, a Phinisi that was built for the charter market. It was luxurious and comfortable, and it was infused with Seery’s love of Indonesian art and culture. Silolona changed the perception of the Phinisi. In her wake, there is now a fleet of luxurious Phinisi boats available for charter, each offering guests something unique and extraordinary. 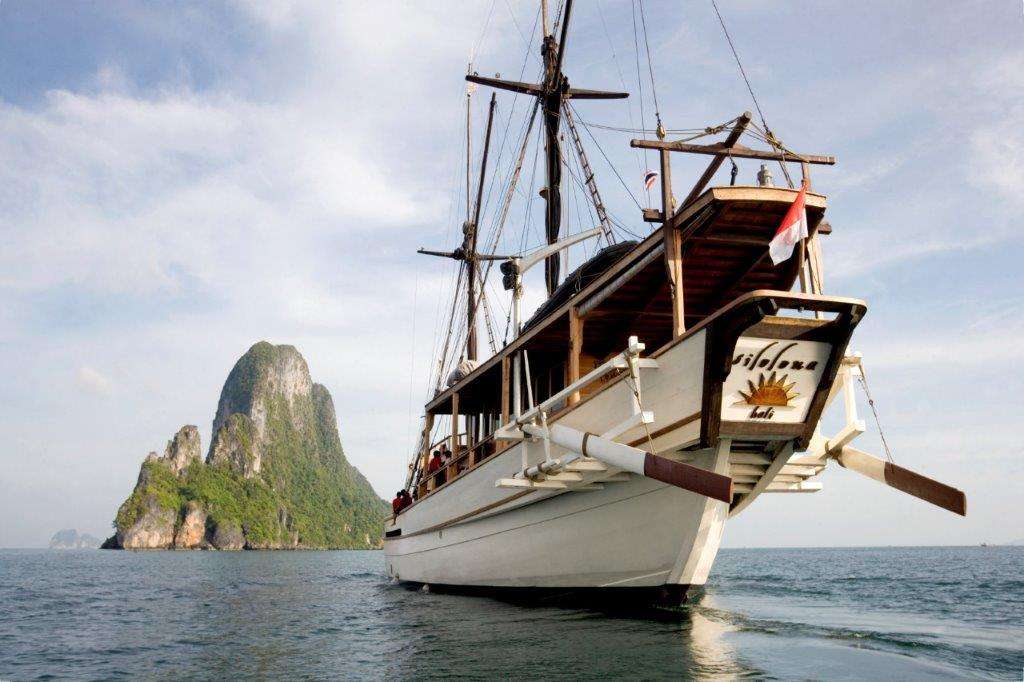 Dunia Baru is one such Phinisi, launched in 2014 by her original owner, Australian entrepreneur Mark Robba. Like several Phinisis now on the charter market, Robba says he built Dunia Baru for his family’s personal use and for exploring Indonesia. He later added in a mission of education and conservation.

He also used Dunia Baru as a social enterprise, establishing ways for local people to earn a decent living from the tourism that his Phinisi would bring. 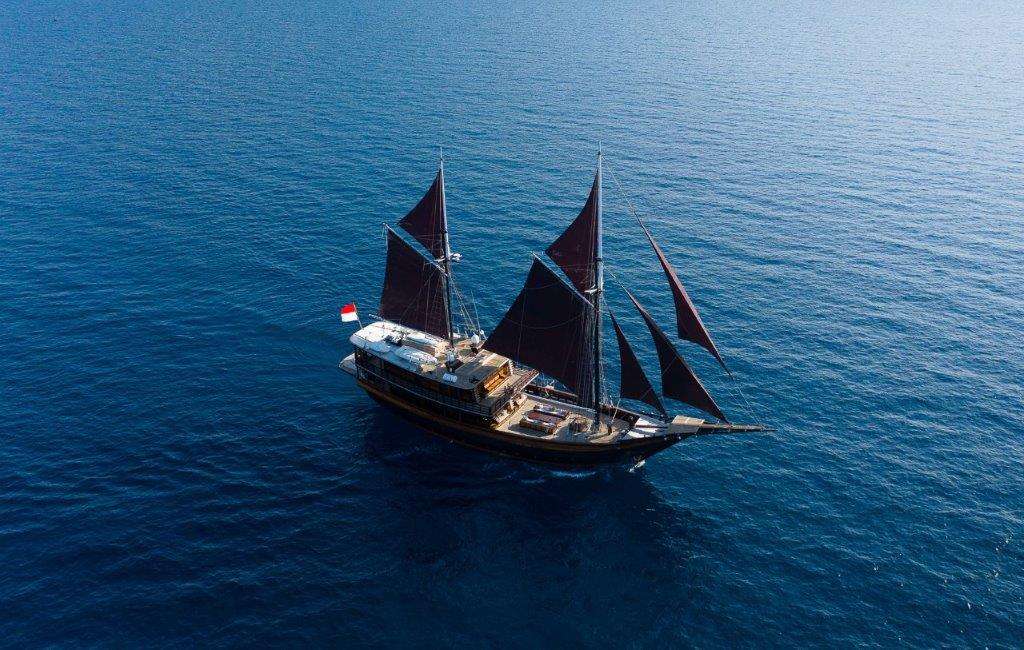 Today, Dunia Baru is owned by a Singaporean company that has just finished refitting the boat. She is once again ready for charter.

Meanwhile, Lamima offers her charter guests another spectacular wooden option. Built in 2014, Lamima is the brainchild of Dominique Gerardin, a former superyacht captain who was captivated by cruising in Indonesia. Gerardin says that it took three years to design and build Lamima, which offers its guests 400 square metres of open deck space up top.

The yacht also features the latest in tech wizardry, allowing people to enjoy their favourite music or movies after a day spent diving and discovering new underwater species.

While most Phinisis have sails, per the traditional Phinisi boat, Lamima’s sails were designed and built by Marine Results in the UK, which has built rigging for numerous superyachts. The result is a yacht that can actually sail to its destinations. 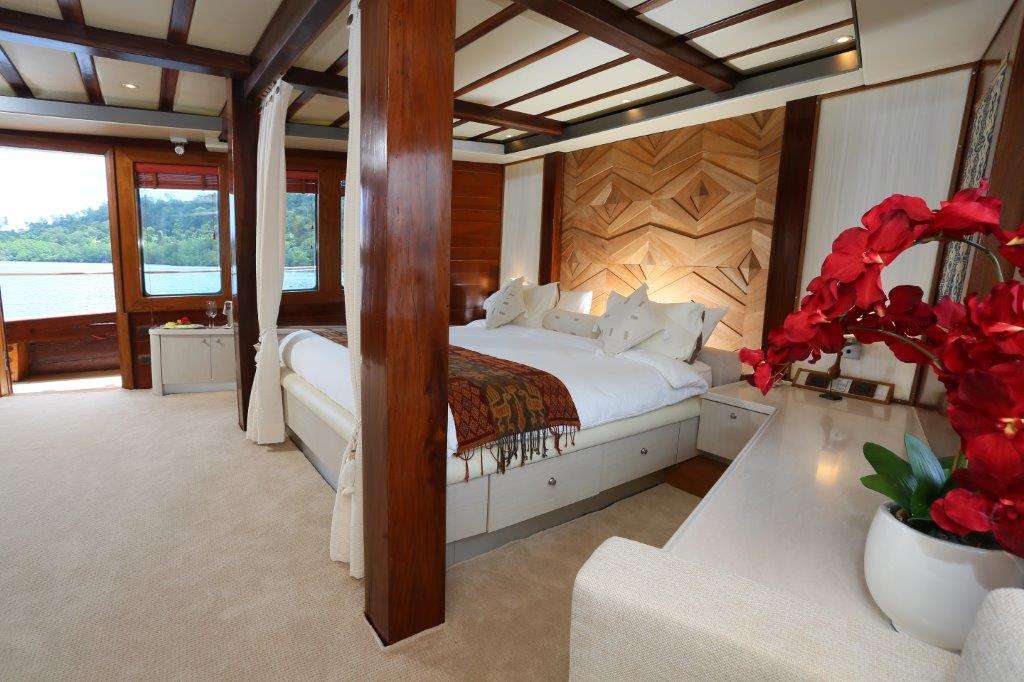 While Lamima, Dunia Baru and Silolona offer enormous deck spaces and huge guest rooms, there are smaller Phinisis that provide a more intimate environment. The 26-metre Sequoia took four years to build, with her main cruising waters in West Papua, the Molucca Islands and the Lesser Sunda Islands. She comes with PADI dive centre. 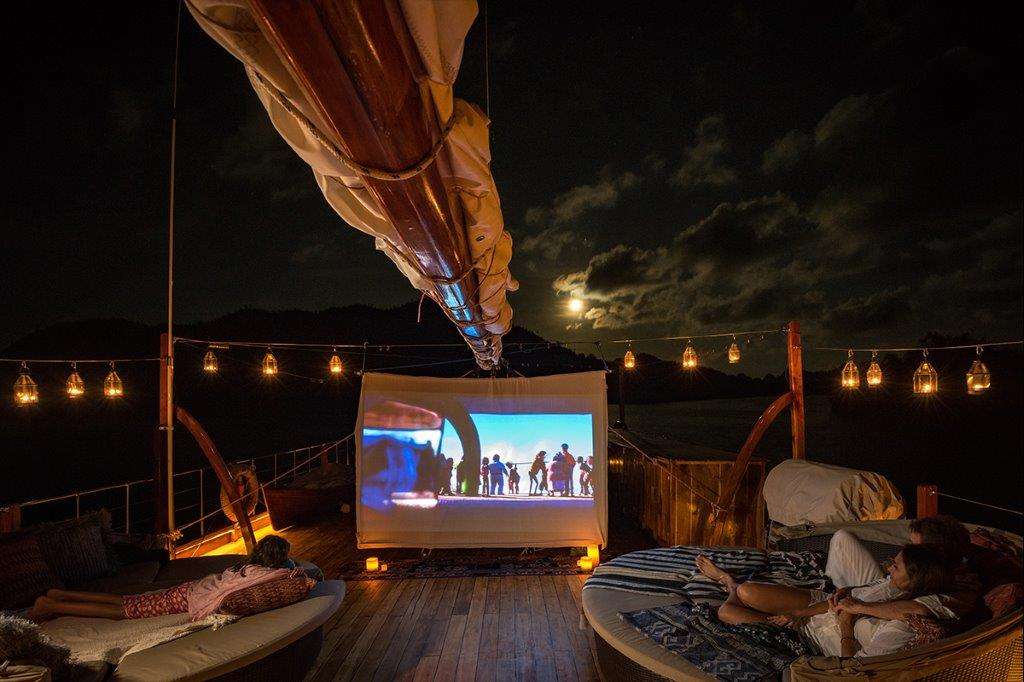 Sequoia’s layout is based around just three suites, each one finished in organic fabrics. She also has a shorter draught in keeping with her smaller size, allowing easier to access to the countless bays of Indonesia’s islands. Finally, there is the grande dame of Phinisis, Silolona. 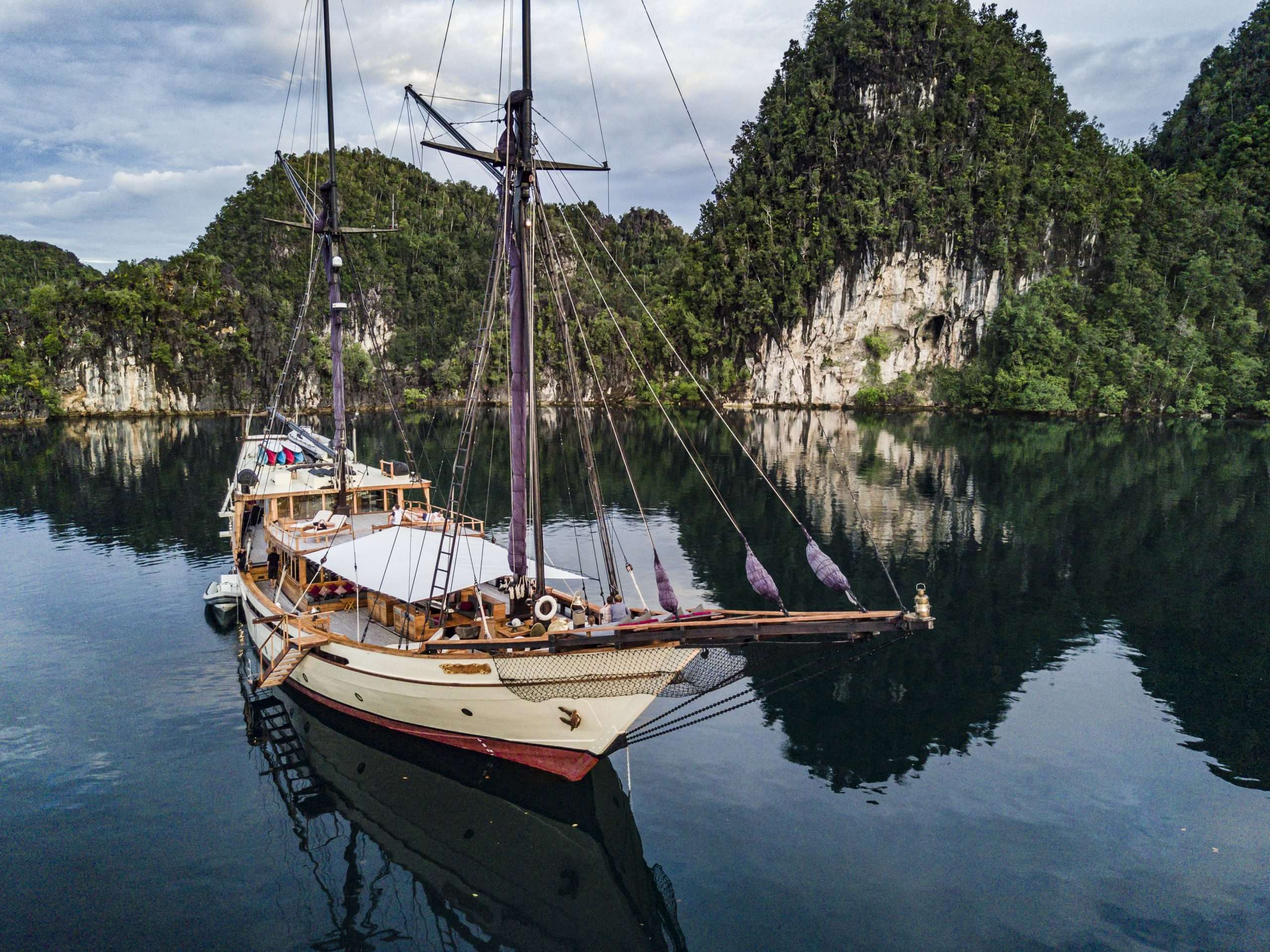 Though Patti Seery passed away in 2020, her son Tresno continues to operate Silolona and her sister ship, Si Data Bua. Silolona set the standard for luxury Phinisis and remains the most sought-after charter vessels in Indonesia.

The late Seery did something unexpected when she launched Silolona – she made her Indonesian crew the stars of a unique cultural show in which arts, crafts, food and history were placed front and centre with a stay aboard Silolona. No longer were local people treated as something to be viewed from a distance from the deck of a superyacht. 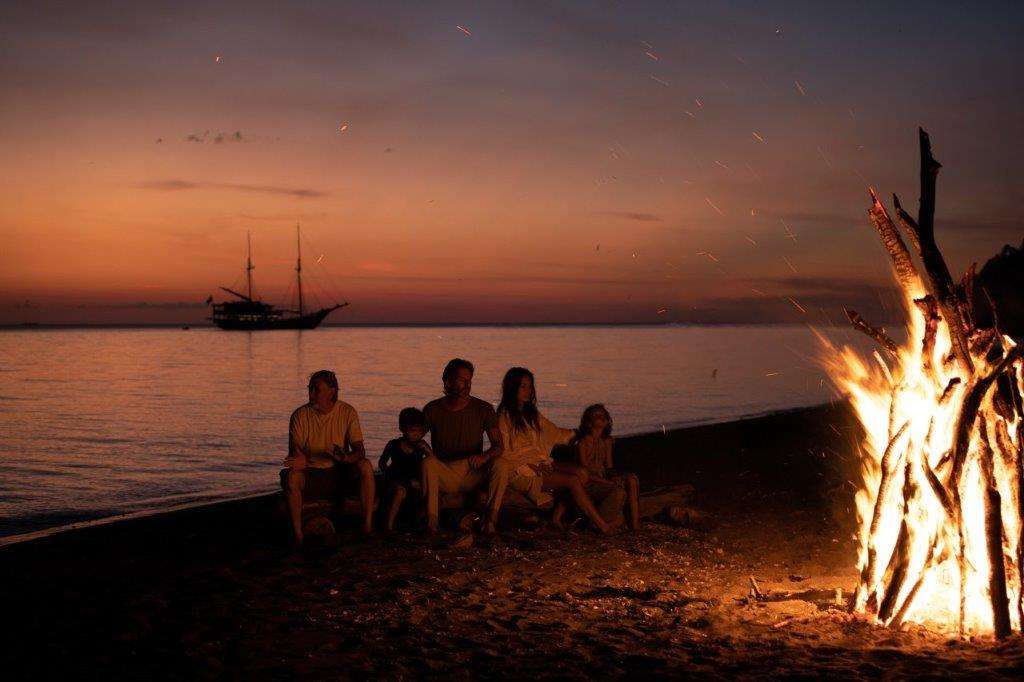 The wooden Phinisis of Indonesia ushered in a new era of seaborne exploration and luxury in Indonesia, where the culture of the place was part of the very vessel under your feet.