The attraction of a flybridge are several-fold and top among them for Pacific-based boats is commanding views of coral-strewn coastlines but luxury Australian builder Riviera has gone further by creating a complete living space on the new 72 that even includes a bed. Talk about a room with a view. The latest in the Queensland-based company’s new Sports Motor Yacht collection, after the launch of its 68 last year, the 72 offers more space and a new tweaked hull while still showing off those famous curves and bold stature that defines a Riviera. These yachts are intended as bluewater adventure boats, so come with long-range capability – our 72 review boat can do more than 2,000 miles in displacement mode – and has levels of self-sufficiency or manual controls, making it ideal for long Pacific sojourns. 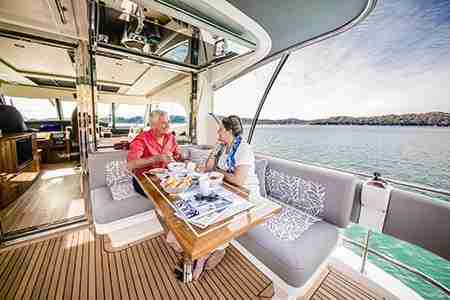 Riviera exports the majority of its 100-boat annual build overseas where these high-quality sports cruisers are keenly sought, including Hong Kong where China Pacific Marine has become a dealer and will have a Riviera 45 in the new year. Another 72 hull was presented at the world’s most prestigious yacht show: Cannes in France in September. Ranging in size from 39 to 77 feet, Riviera also build coupé-SUV style and varieties of its signature flybridge range, like the zippy 395 that I recently enjoyed. But the 72 is a whole different level, and proved it during a rough blast off the Queensland coast where we ventured out despite a high wind warning, just to see. Australia’s east coast is far from docile as most of the ports have sandbars, like our entry to Southport where we surfed in on the following waves, but more about that later. 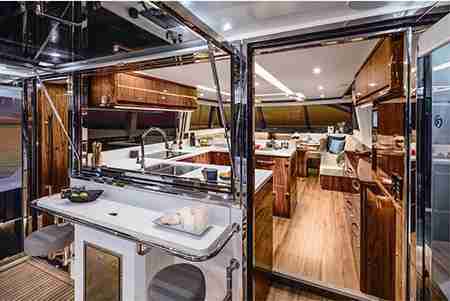 To read all of this article, pick up a copy of the January/February 2019 issue of Asia-Pacific Boating magazine, or buy it online from www.magzter.com. Also available for download from the App Store and Google Play.