A fleet of around 115 boats will compete in this year's race, which will start on October 19 at 11:00 CEST at Grand Harbour, Valletta in Malta

The Royal Malta Yacht Club announces a fleet of around 115 that will participate in the 40th edition of the Rolex Middle Sea Race. The exciting classic Mediterranean offshore race starts on Saturday, 19 October at 1100 CEST from the Grand Harbour, Valletta. 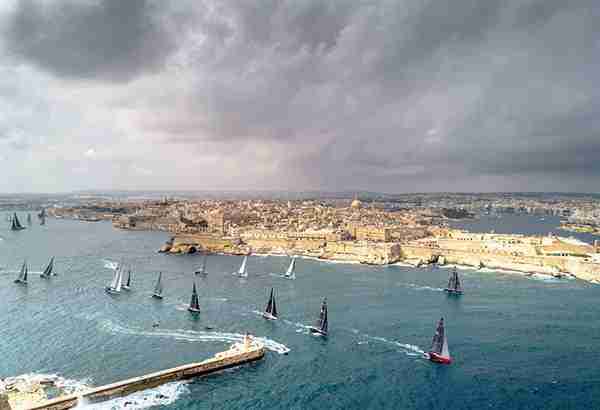 Less than 48 hours to the start of the 40th Rolex Middle Sea Race and the marinas surrounding the Royal Malta Yacht Club in Ta’ Xbiex are full of yachts flying the event battle flag, signifying their participation in the Mediterranean’s classic offshore race.

The yacht club itself is abuzz with the noise of crews meeting up with friends, crew mates and competitors. The docks are a hive of activity, as final preparations are underway and scrutineering checks are made. The entry list currently stands at 110 yachts with a handful more in the midst of completing the necessary paperwork in time for the start.

“We are looking forward to a great spectacle in Grand Harbour with some seven starts to accommodate the diverse fleet that ranges in size from 9.5 to 27 metres and includes both monohulls and multihulls,” says Commodore Godwin Zammit.

“The club is really pleased to once again be welcoming such a large fleet. It will comprise the traditional mix of professional and Corinthian crews, some experiencing the race for the first time and others returning to better previous results or just enjoy the adventure.” Commodore Zammit made special mention of American yachtsman George David, the race record holder: “On George David’s first appearance in 2007, he and his crew set the current record of just under 48 hours. We are thrilled that George, with his latest Rambler, is back once again, attempting to secure yet another line honours and also to beat his own record.”

Although the 2019 fleet is slightly lower than last year’s record of 130 boats, the range of yachts competing will ensure the race is as exciting as ever. “Crews will be looking forward to the challenging conditions typical in this area of the Mediterranean at this time of year,” said Commodore Zammit. “At some point, it is likely tough weather will test the skills and determination of all competitors.”

Commodore Zammit went on to pick out some of the highlights among the 115 or so yachts. Previous overall winners, which include Frenchman Géry Trentesaux and Courrier Recommandé, victors in 2018; Maltese sailor Lee Satariano, who won the race in 2011 and 2014, making a return after an absence of three years with his new HH42, Artie III; and, Russian Igor Rytov back with his 2017 winning JPK1080 Bogatyr, this time racing double-handed. One of the most experienced entries is the Maltese yacht, Xp-Act, co-skippered by Timmy Camilleri, a four-time race-winner as crew and who will be competing in his 26th race. The race will also see the debut of US entry Wizard, owned by David and Peter Askew, and fresh from overall victory at the 2019 Rolex Fastnet Race. 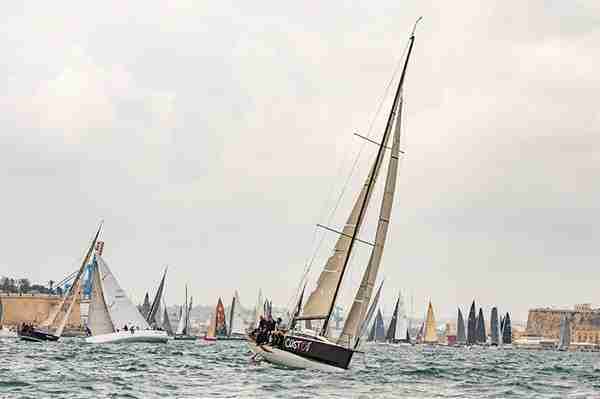 (Image: Rolex / Kurt Arrigo – Courrier Recommandé at the start of the 2018 RMSR)

Some 23 nations will be participating in the race, according to Commodore Zammit with entries from as far afield as Australia and Argentina. Italy is the most represented with 22 yachts ranging from the ORMA 60 Ad Maiora, skippered by Bruno Cardile, to the Akilaria 950 of Francesco Conforto. The British presence is strong too, with Sunrise, Thomas Kneen’s JPK 1180, Trevor Middleton’s Sun Fast 3600 Black Sheep and Nigel Passmore’s Dazcat 1495 Apollo, among those to look out for. The French also have some strength in depth, with Eric de Turckheim’s NMYD 54 Teasing Machine, Laurent Camprubi’s JPK 1030 Jeanne and Gerard Logel’s IRC52 Arobas 2 catching the eye. In recent years, Russia has delivered a number of highly competitive entries. This year is no exception, with regular participants Sergey Bryuzga’s Ker 40 Frogfoot and Nikolay Drozdov’s Elan 350 Rosatom Sailing Team entered.  Elsewhere, among the local Maltese entries, the Jarhead Young Sailors Foundation has entered two youth teams, one of which – JYS Jan – is an all-female crew; and there are two yachts which retired last year that will be looking to challenge for podium places: Marton Jozsa’s R/P 60 Wild Joe from Hungary and Stefan Jentzsch’s German entry, the Carkeek 47, Black Pearl. Full entry list is available here.

Principal Race Officer and Race Committee Chairman, Peter Dimech outlined the forthcoming event programme: “We kick off on Wednesday, with the Coastal Race, starting and finishing in Marsamxett Harbour,  a good dress rehearsal before the main event,” Dimech advised.  “The Coastal Race is a perfect opportunity for international and local crews to give their boats a final shakedown before Saturday. The current weather forecast suggests the most likely course will be up to Comino and back.”

Dimech added that there are a number of social events for crews, including the Owners’ Reception on Wednesday evening, which incorporates the Coastal Race Prize Giving and is co-hosted by Yachting Malta; the famous Crew Party on Thursday and, on Friday morning, a Question & Answer session featuring a number of participants. On Friday evening, the Race & Weather Briefing takes place at the Grand Hotel Excelsior.

Turning to Saturday’s departure of the Rolex Middle Sea Race from Grand Harbour, Dimech confirmed there will be seven starts, with the first class, the Multihulls, starting at 1100 CEST.  The remaining groups will follow at 10 minute intervals, with the guns of the Saluting Battery marking each start.  Proceedings will be co-ordinated between the Royal Malta Yacht Club, Transport Malta and the Armed Forces of Malta.

“It is one of the best, most dramatic race starts in the offshore racing world,” remarked Dimech. “Grand Harbour is blessed with a vast number of accessible viewing points both high up and low down. The crowd can feel really close to the yachts without the need be on the water. We are expecting a huge number of spectators.”

How to follow the 40th Rolex Middle Sea Race

Where to watch live: various vantage points available around the Grand Harbour, including – St. Barbara’s Bastion, Great Siege Bell, the Old Fisheries Building, the Valletta Waterfront, as well as the Birgu and Senglea promontories

The start will be streamed live on Facebook here.
Real-time fleet tracking is available here.