The new WHY200 from Wally was the head-turning show stopper at the 2021 Cannes Yachting Festival, and for good reason. The bold design creates enormous spaces while offering favourable fuel consumption 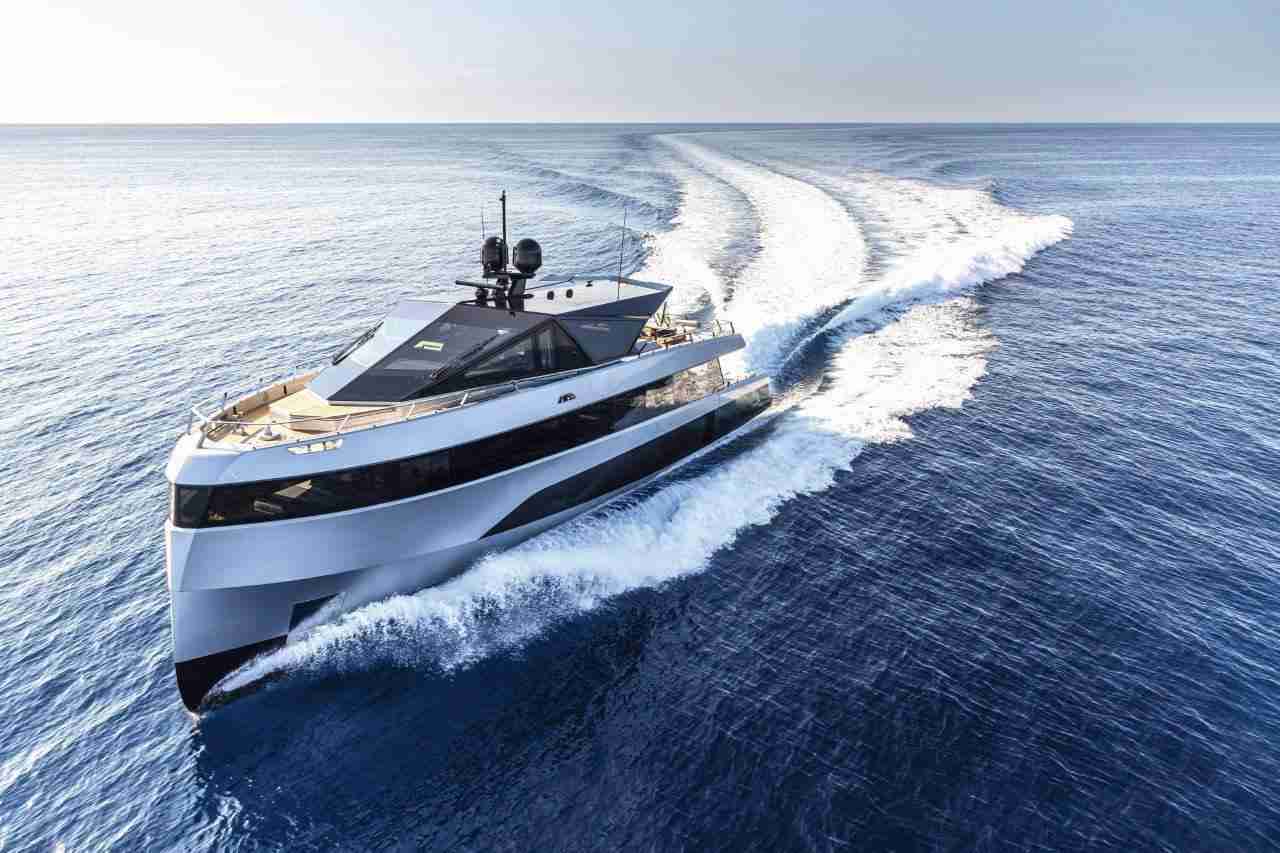 “Leave it to Luca” must be the phrase heard around the Ferretti Group boardroom whenever bold design thinking is needed.

Space-age looks are often the mark of Wally yachts, both in sail and power. The famous WallyPower 118, first released in 2003, was repeatedly described as a yacht well suited for Darth Vader. The 118 was released when any yacht of 80 feet or more had the classic “white boat” look. Today, such angular shapes are found in any high-end marina.

With WHY200, Bassani and his team have again pushed some boundaries. But instead of the sharp, slightly sinister and high-powered looks of a 118, it is enormous space and fuel efficiency that drive this new yacht.

The WHY200 turned heads when it debuted to the public at the 2021 Cannes Yachting Festival. Located at the start of the Superyachts Extension space, the WHY200 never ceased to create a traffic jam of people taking in the striking appearance of this impressive new yacht. While the looks are fantastical, the goals are practical. The 200GT WHY200 aims to combine the comfort and space of a large displacement yacht while offering the performance of a smaller, semi-displacement yacht.

“It essentially provides all the advantages of a catamaran but has none of the limitations, namely the lack of volume linked to the main central hull and mooring problems,” says Stefano de Vivo, Wally managing director. 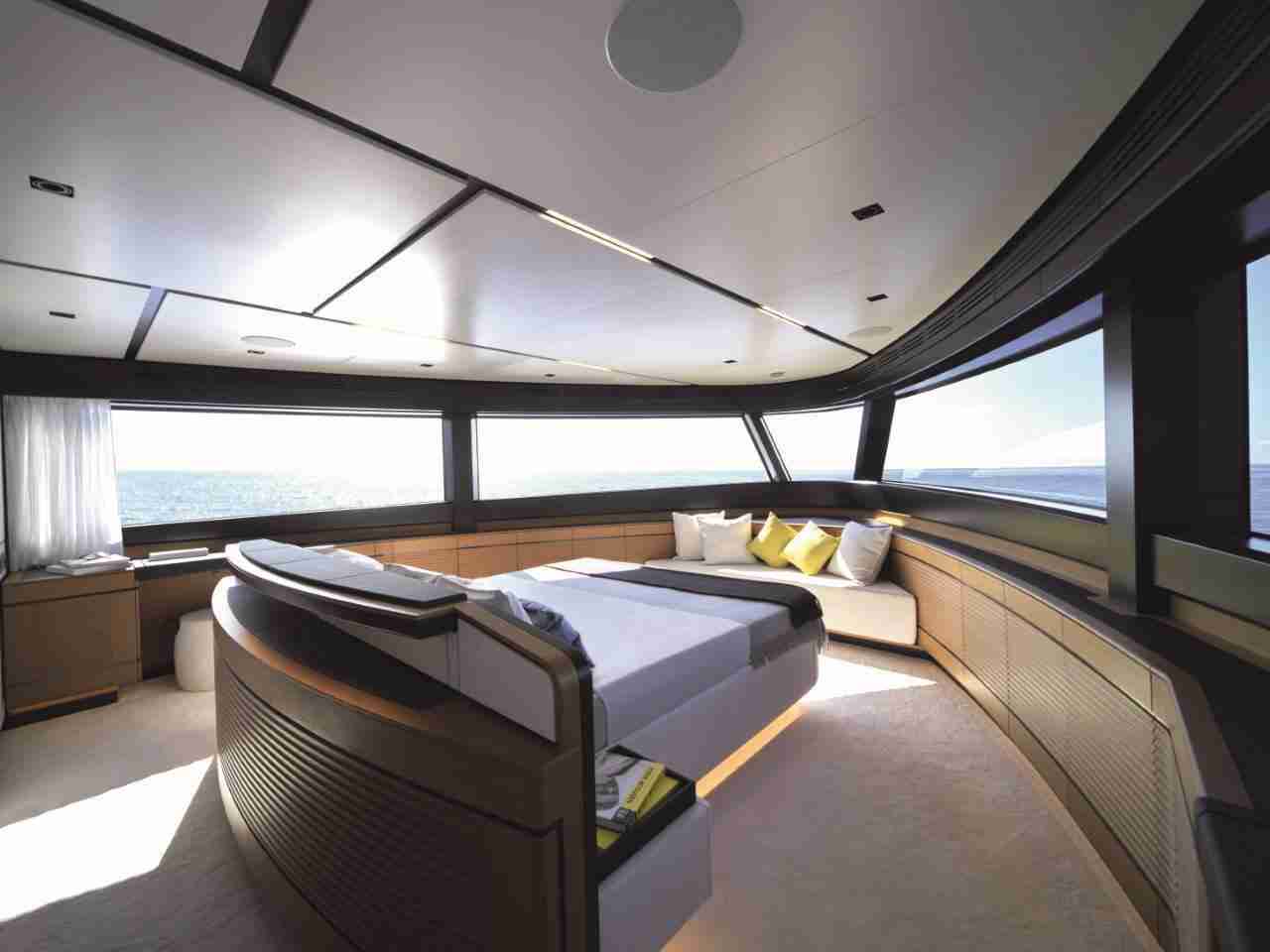 The massive forward cabin can also be a karaoke lounge

“Like all Wallys, which for 25 years have been ahead of their time and the setters of new standards in yachting design, the new compact superyacht WHY200 carries the wow factor engraved in its DNA,” says Luca Bassani, who also describes the new design as a “turning point” in the yacht market.

Perhaps the most eye-catching element of the WHY200 design is the creation of a massive forward suite right at the bow, which can be anything from a full master cabin to a karaoke room. On the first of the series, a giant master cabin was fitted, with forward-facing windows for a spectacular 270-degree view.

Stepping onboard and seeing the master cabin for the first time is to fall in love a little. At 37sqm, the space is enormous, but it is the view that is to die for. The master in the bow is 4.7m above sea level – it offers the view you’d expect to find on the main helm station. Since the engineering is located at the opposite end of the 27m WHY200, noise and vibrations are also reduced. 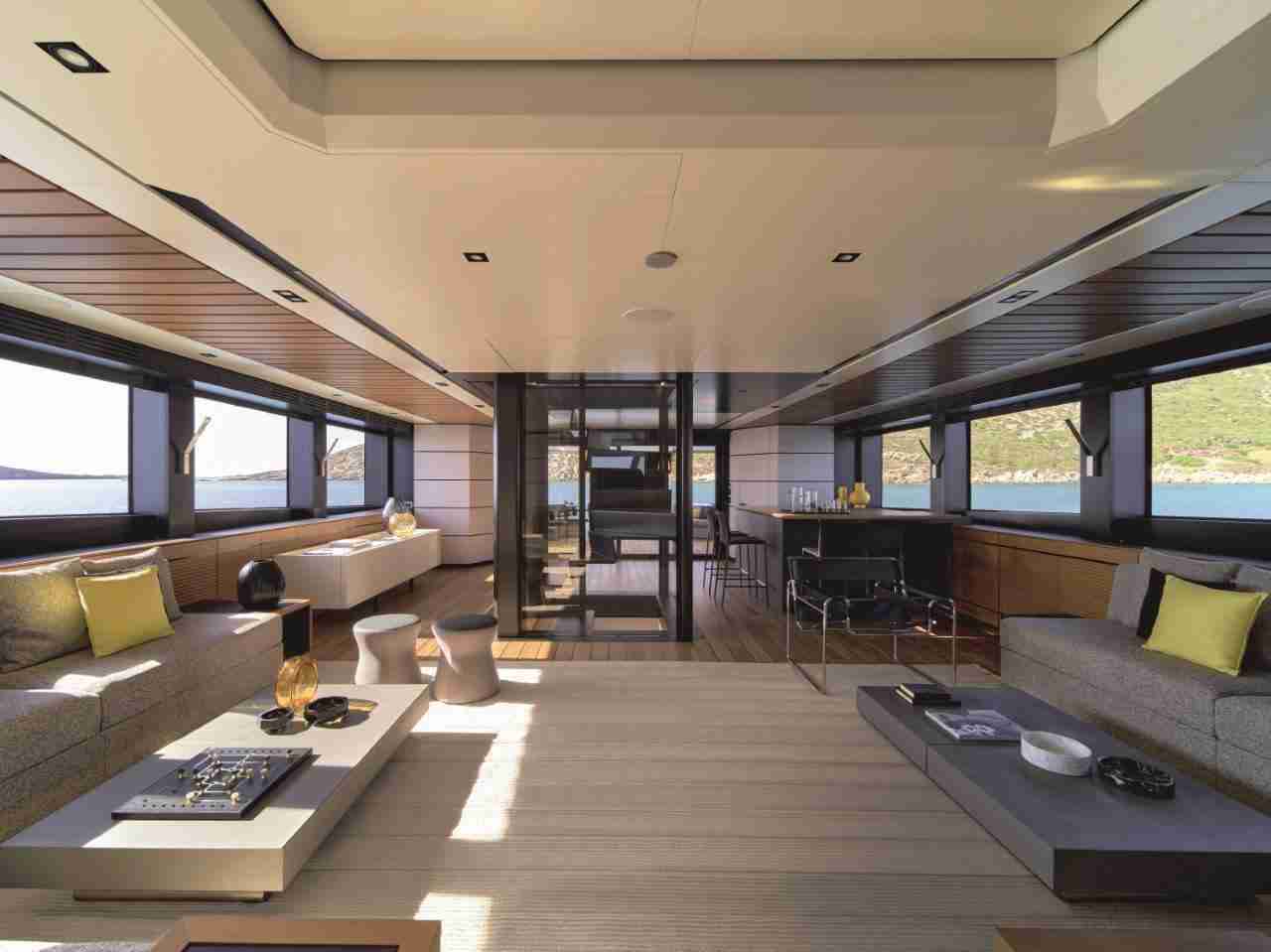 The upper deck, cockpit glass and carbon dome recall the legendary WallyPower series. There are no supporting pillars on the upper deck, creating a spacey, angular area that seems to recall the Starship Enterprise. Even the helm station chairs would look perfectly in place in a science fiction film.

The first WHY200 has a four-cabin layout, with the master perched on the main deck and the VIP and two guest cabins on the lower deck.

One piece of interior design and build that even Bassani himself likes to comment on is the internal staircase, made of a single piece of carbon fibre. When I asked why he opted for such a difficult way of building an internal structure, Bassani shrugged. There was no need, he seemed to imply. It was just for the sake of the challenge. But that staircase does provide a load-bearing function, which opens up the main deck into a 61sqm living area, with a show kitchen that would fit into any deluxe cooking show.

The main deck living space is enormous, thanks partly to the wide beam and the lack of external passageways to the bow – which Bassani decided to forego as a lounge area. The interior spaces are enormous – onboard, you could be forgiven for thinking that you were on a 40m yacht. 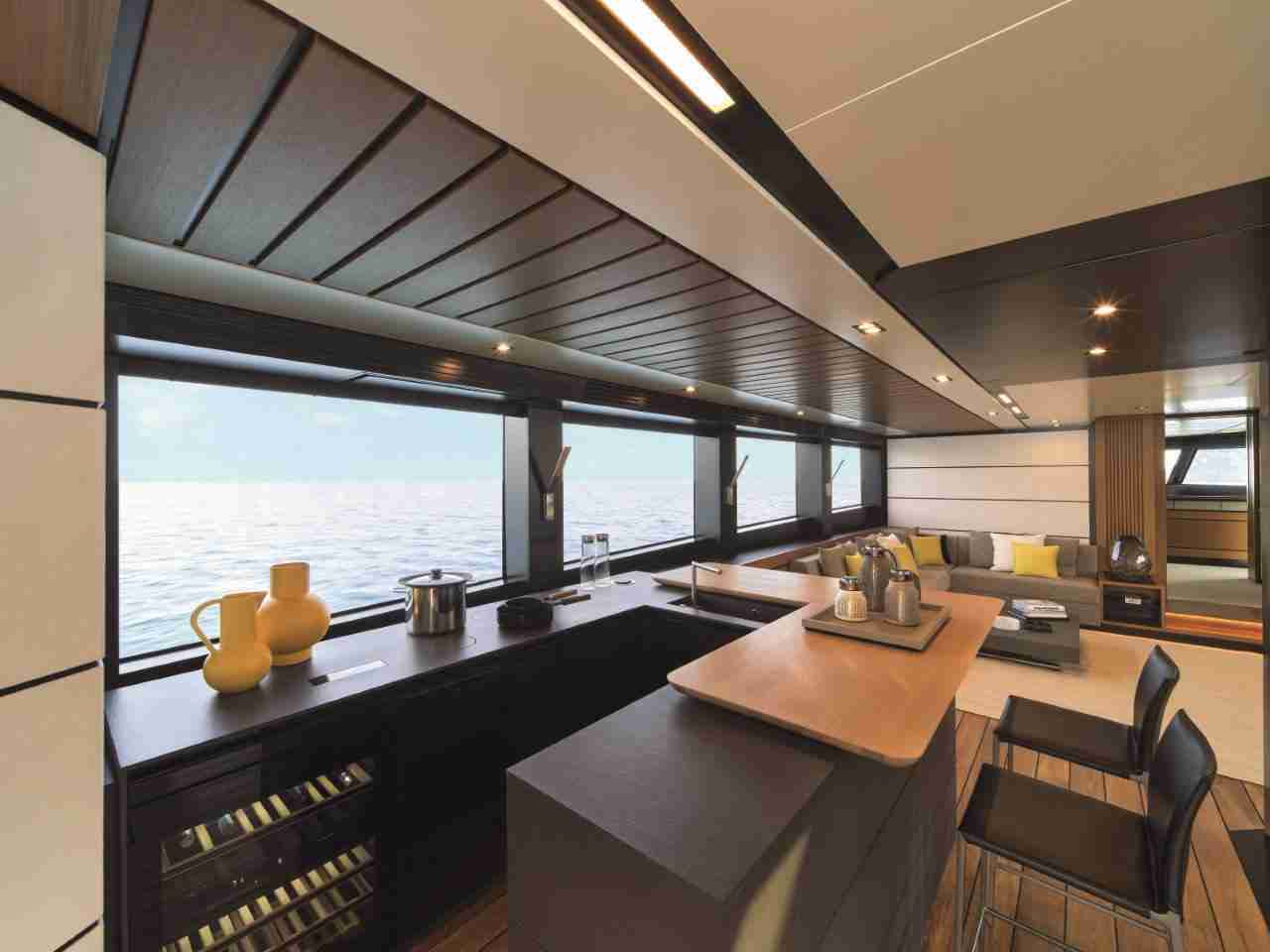 The “showroom” galley on the main deck

Open-pore teak was chosen for the furniture. The walkways of the two living halls and the lower deck corridor are also teak. Guests can manage their A/V needs and mobile devices with a 5G wireless network that includes home automation controls. The main deck has a 55-inch TV, and there is a premium sound system serving both interior and exterior decks.

Of course, no sizeable yacht is complete without a beach club! Here, the WHY200 goes the extra nautical mile by having folding bulwarks that create a total area of 32sqm. In addition, WHY200 has two garages with storage space for a four-metre jet tender, wave runner, Seabob, paddleboard and all manner of water toys.

The performance numbers will leave owners pleased at the pump. The first unit is powered by four 1,000hp Volvo Penta IPS 1350 engines. Thanks in part to its hull shape, characterised by a fine entry and wide aft deck, the yacht can cruise comfortably at any speed up to 23 knots. Dropping the speed down to 10 knots reduces fuel consumption to under 120 litres per hour. Fin stabilisers come as standard and can be used at anchor or underway.

“WHY200 has two garages with storage space for a four-metre jet tender, wave runner, Seabob, paddleboard and all manner of water toys” 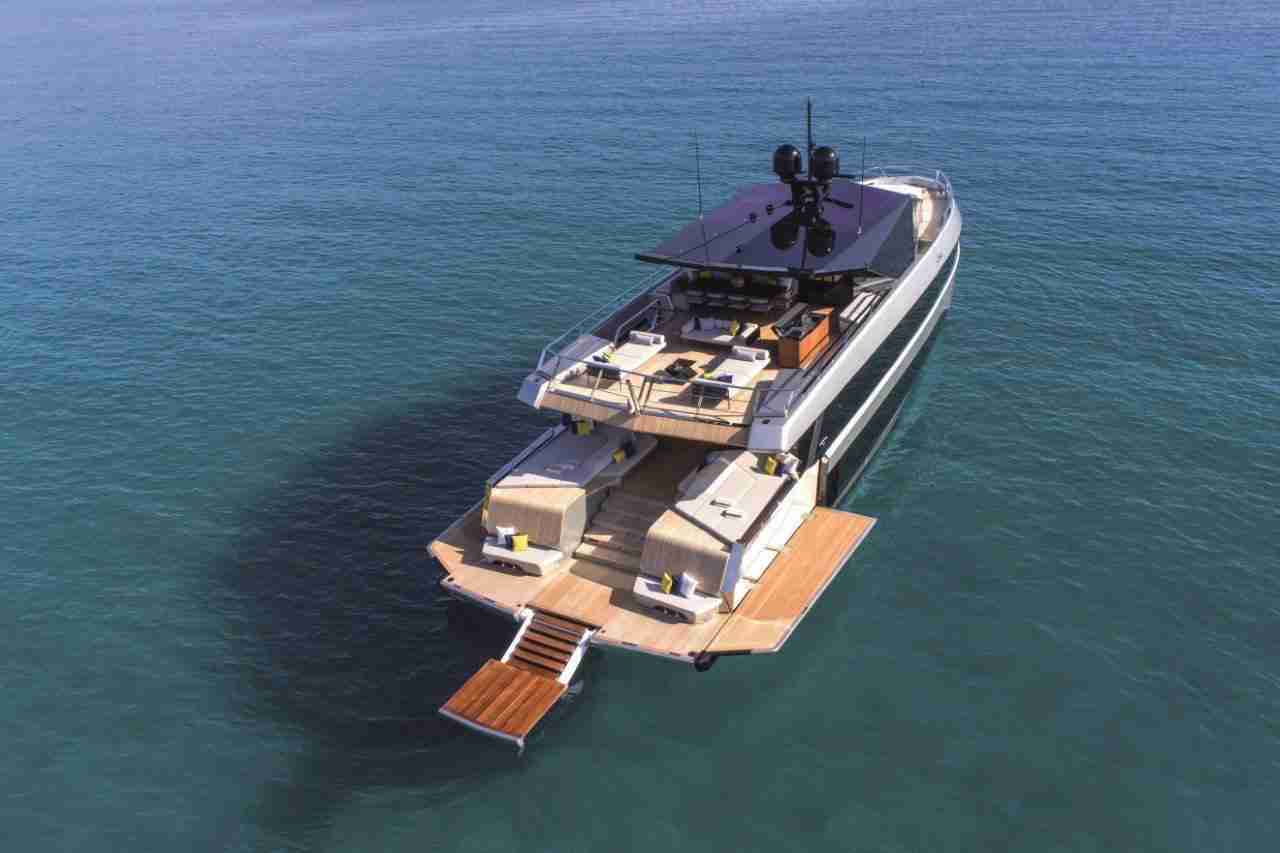 The lower deck houses substantial crew quarters, which is great for hiring and retaining a good crew. Instead of placing a VIP cabin amidships, the crew quarters have been put here, insulating the guest cabins located towards the front of the yacht from the engineering spaces. The crew, therefore, enjoy roomier accommodation than they would if they were shoved into a tight bow area; there is ample space for up to five – a lot on a 27m yacht.

There are plenty of design choices in this new yacht from Wally. You may find yourself asking: why not? 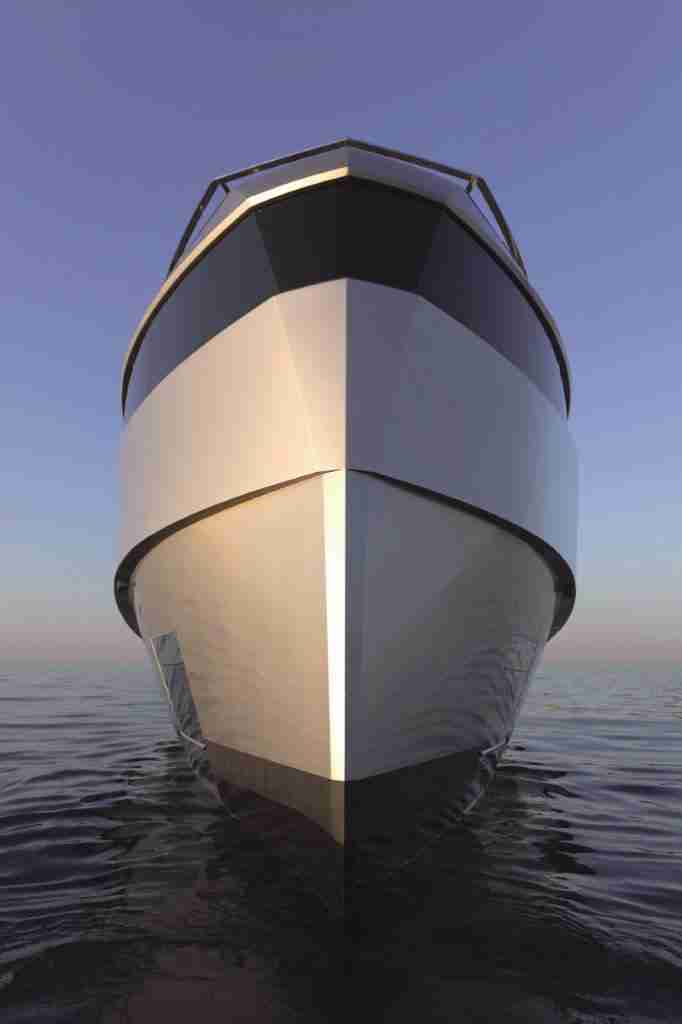