One of the top contenders in the growing field of all-electric runabouts is the new Vita Lion from electric startup Vita Yachts, a 10.5m open boat that offers thrilling acceleration in near silence 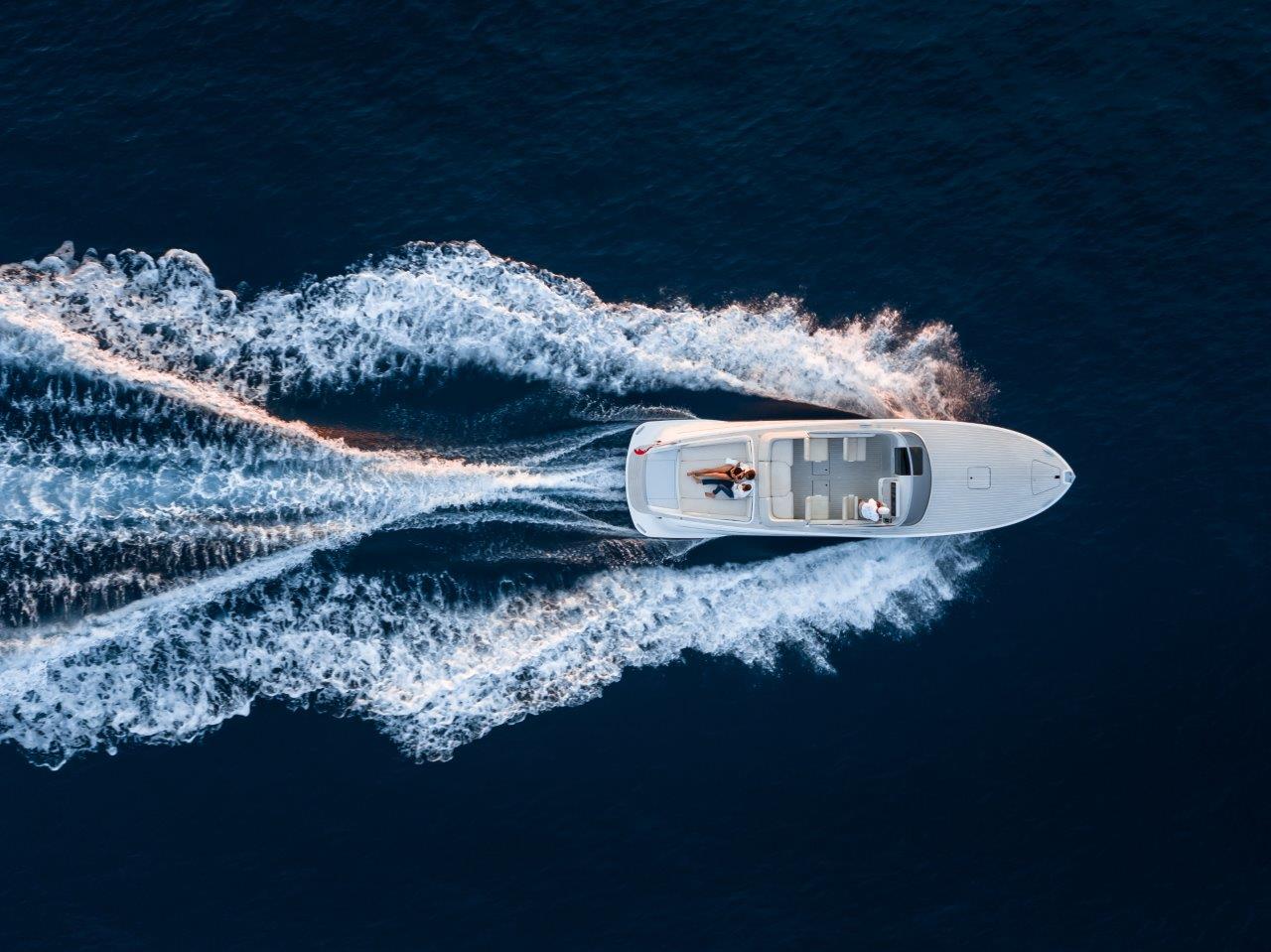 As concern over climate rises globally, industries everywhere are touting their green credentials while plucky startups search for solutions to cut carbon emissions. The 2021 Cannes Yachting Festival featured a new section dedicated to the growing range of all-electric runabouts, and one of the star attractions at the dock was the Vita Lion by Vita Yachts, a British-Italian startup.

The Lion was available for test drives and, feeling that it was time to get onboard with the clean, quiet trend, I went for a spin.

Range is the key consideration, and – as most dealers of electric runabouts acknowledge – it is the main question they field from prospective buyers.

The Vita Lion, with its current battery packs, can maintain a cruise speed of 24 knots for about 90 minutes. Assuming favourable conditions, that works out to a cruising range of about 65 kilometres, about the distance from Hong Kong Central to downtown Macau. It would also work for dayboating out of Sai Kung to most locations in Hong Kong waters.

“We have had a few conversations with people in Hong Kong who are interested,” says Vita Yachts and Vita Power CEO, Rory Trahair. “Hong Kong lends itself to electric boating.” He said that even though Vita hasn’t sold a boat yet in Asia, Hong Kong remains very much on his radar – and Trahair has a cousin working with an Asian yacht dealer. 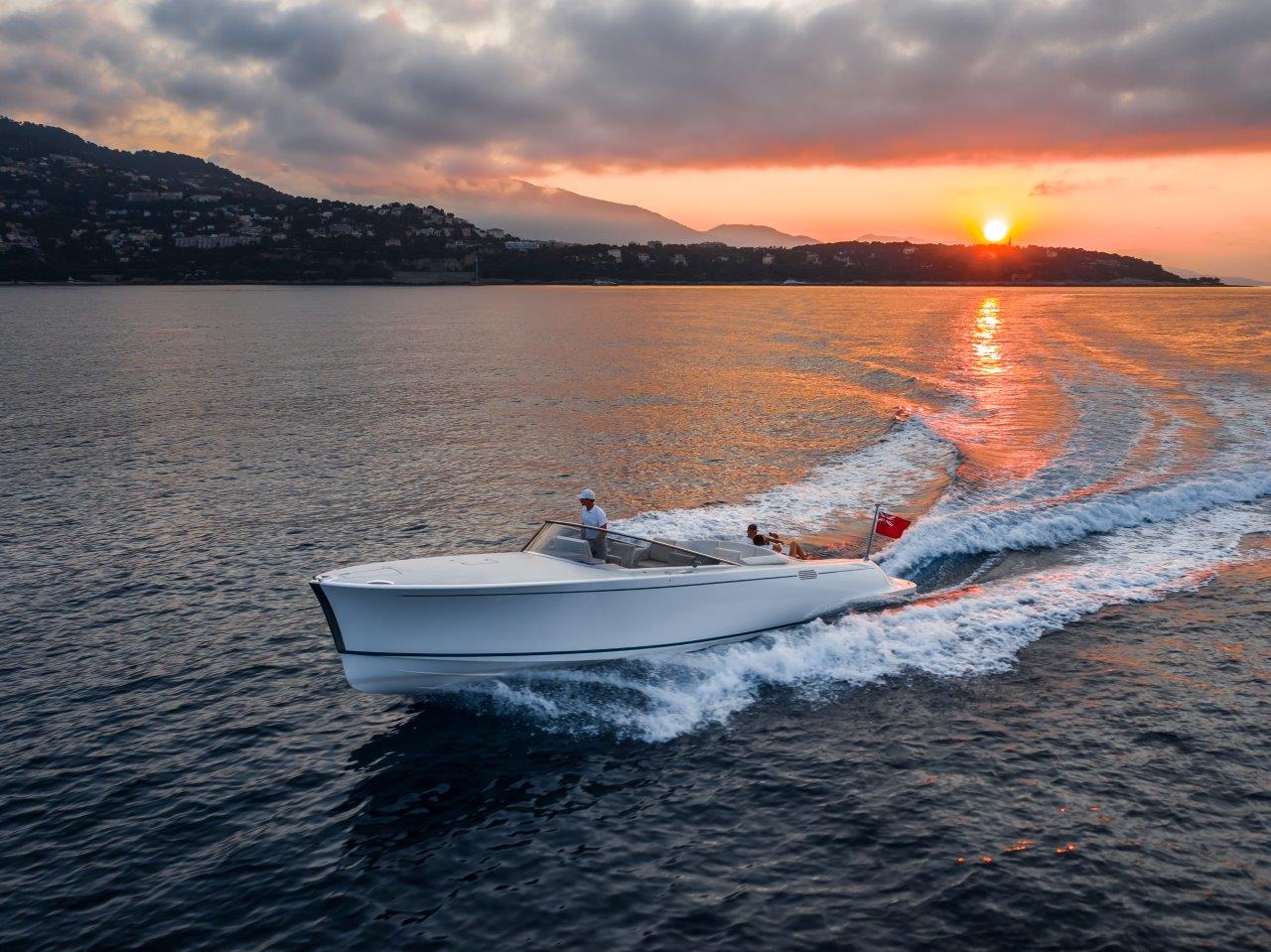 READ: Charged up: How far can electric boats go?

The Vita Lion we trialled is used by her secretive owner to make runs between St. Tropez and Monaco, a distance of 40nm that’s manageable at 10 knots, according to Trahair. He reports that Vita is focusing its development work on hull efficiency, its Vita Power drive train and propeller design to wring out as much range as possible from its yachts. For the batteries, he is working with suppliers to boost performance parameters. “There is no golden bullet” in the quest to boost the numbers, Trahair says.

Of course, there is also the sleek performance of the boat itself. Like a Tesla, the Vita Lion accelerates quickly and very quietly.

Motoring at slow speed on our way out of Cannes Harbour, you can hear a slight, high-pitched whine from the electric motors, but as the speed rises above 10 knots, any noise from the engines or drive train is drowned by the ambient noise. It is a strange experience at first – you can enjoy the speed of a motorboat and the quiet of a sailboat. It almost seems a little odd to hear the wake in the water and the wind but not the engine – it feels as if something is missing.

The Vita Lion, with its current battery packs, can maintain a cruise speed of 24 knots for about 90 minutes 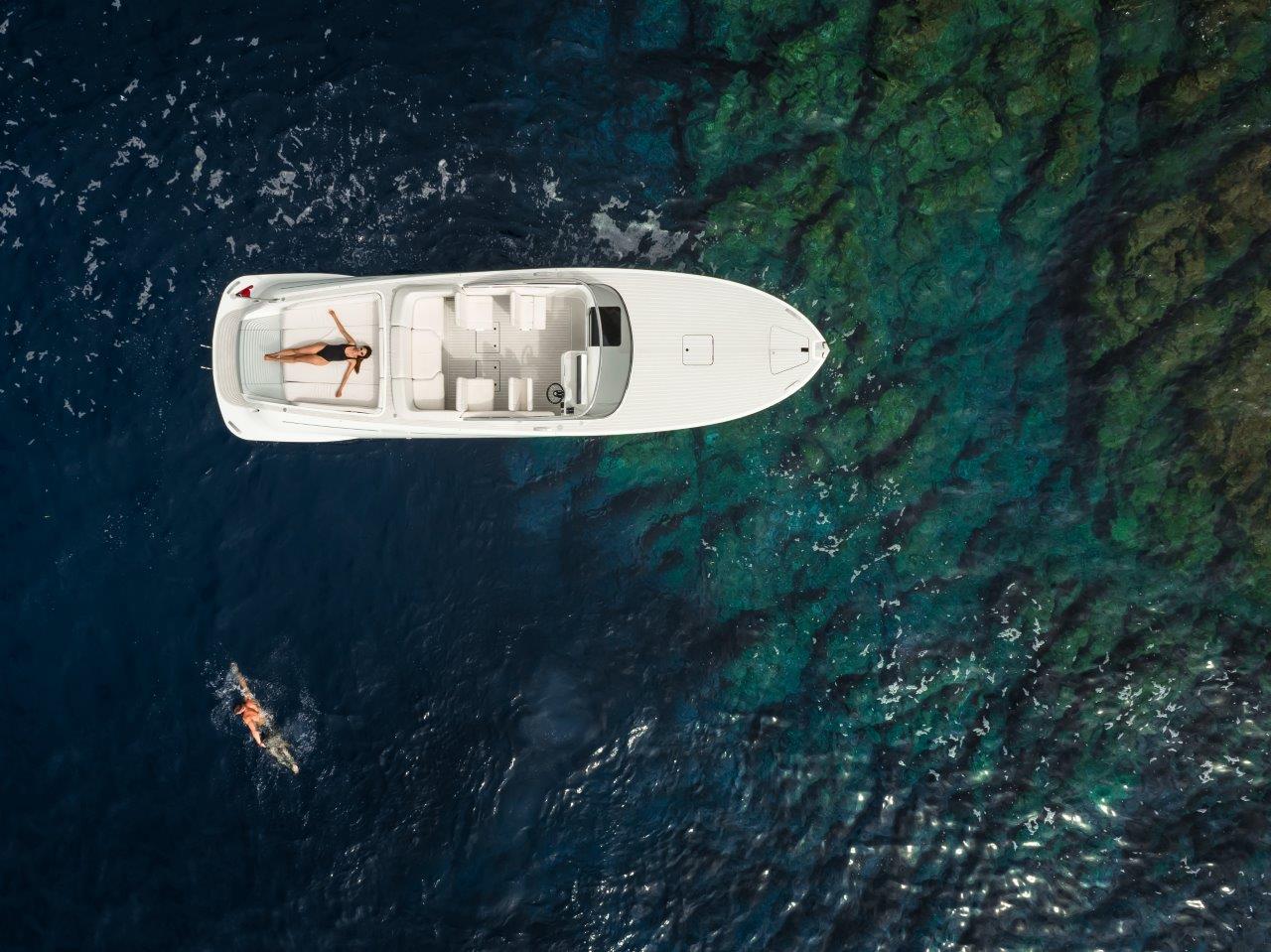 The Vita Lion features sleek, minimalist styling at home in the Med

Then there is the acceleration. This is one of the joys of all-electric runabouts. The Vita Lion gets up the plane quickly, and it is a thrill to hit the throttles. A few test runs showed us hitting the top speed of 34 knots from a standstill in just a few seconds.

There are four batteries on the Vita Lion that can deliver a maximum of 590hp to twin Mercury Bravo sterndrive engines. A full set of readouts at the helm station reports on everything, including battery levels. The handling was as good at speed as any runabout on the market.

The Vita Lion also just looks good. In fact, buyers of electric runabouts already have a range of styles to choose from. There is everything from the boxy modernism of X Shore to the retro-styling of Marian.

Our test Lion was a solid white with a sleek but minimalist style that would certainly appeal to Italian buyers. On deck, there is ample space on this 10.5m boat for lounging areas. Forward and below, there is a small cuddy cabin that could be used for many purposes. The Vita Lion is being sold as a superyacht tender. 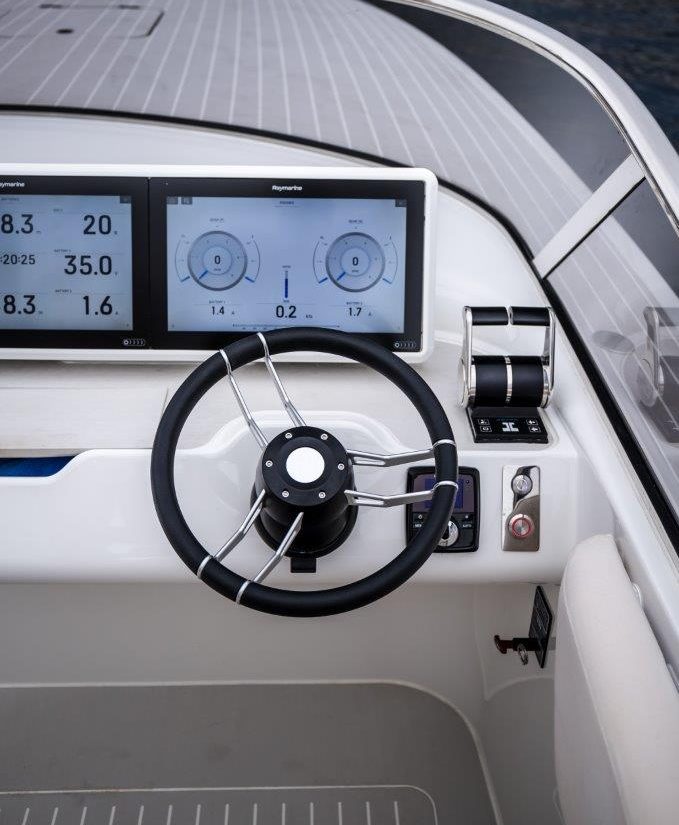 One of the keys to appealing to a growing first-time clientele rather than confirmed electric enthusiasts is making sure that electric boats can be easily charged up. The Vita Lion features ultra-fast DC charging, with the boat going from 10 per cent power to 90 per cent in less than an hour. For Trahair, this key point makes the Lion a compelling buy.

“DC charging is central to what we’re doing,” says Trahair. “High-speed charging is the way to get people to embrace electric boating.” He adds that an owner could get a 40 per cent charge in just 30 minutes while stopping for an ice cream.

“DC charging is central to what we’re doing. High-speed charging is the way to get people to embrace electric boating” – Rory Trahair

Although the initial cost of an all-electric boat may be higher than a gas-powered boat of similar size, an overnight charge from onshore power will be a much smaller hit on the wallet than a trip to the fuel pump. 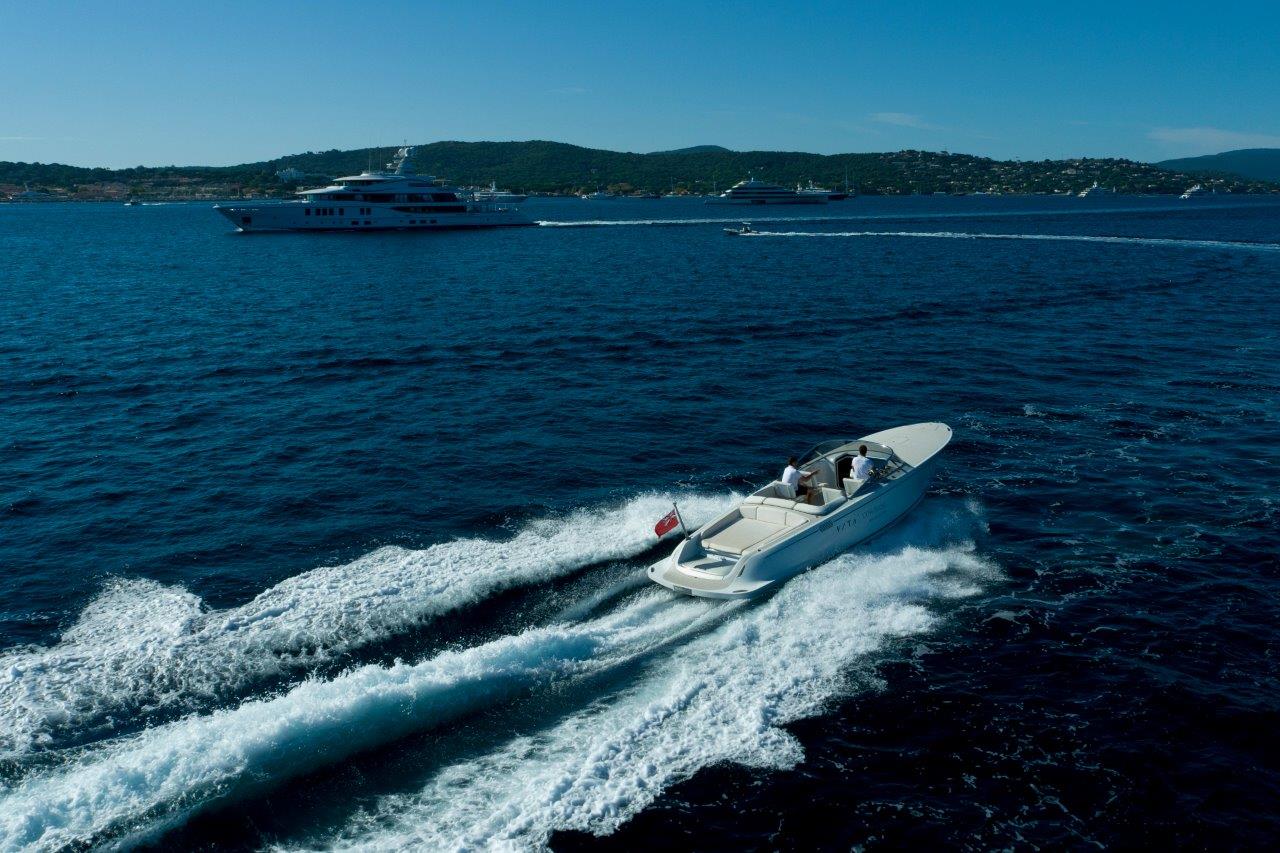 The Vita Lion accelerates quickly at full throttle, but in near silence

In Asia, such high-speed charging infrastructure does not exist yet. However, in the French Riviera, a new high-speed charging network for boats is being created by Aqua Superpower, another startup that has a partnership with Vita. So far, Aqua has built 10 charging stations connecting St Tropez, Cannes and Monaco, allowing Vita Lion owners to shuttle back and forth with little difficulty. Aqua Superpower has said that it has plans for a global network.

Trahair says that Vita Power will launch a new RIB and an all-electric jet ski is also in the works. The company is currently focused on its business in Europe, and Trahair says the US is the next key market, which Vita Power will be targeting in 2022, possibly with more shows and exhibitions.

“Every time we show a boat, and they [potential owners] get out on it, it re-emphasises that electric boating is already here, and you can do it today.”