Exploring Asia by sea is adventure enough. But to make charters in Asian waters unforgettable, you need the tenders, toys and gear to match. If that idea sounds alluring, then consider a charter aboard the toy-laden expedition yacht Suri

All images courtesy of Jim Raycroft

“She may not look like much, but she’s got it where it counts,” said Han Solo about his beloved Millennium Falcon. The same could be said of the superyacht Suri, which does not look like much, but when you dig deeper into its story – and its list of toys and tenders – you find yourself tempted to go on board like few other charter yachts.

Southeast Asia, the Indian Ocean, South Pacific and Antarctica are the up-and-coming superyacht destinations of the world. The bays and hidden gems, coral reefs and private islands with untouched beaches are out there to enjoy. But marina services and shore support can be rare in these far-flung places.

Suri is a 63-metre conversion superyacht that defies expectations in almost every category. She began life as a crabbing boat working the treacherous waters off Alaska and later underwent a five-year refit and conversion programme. Owner Ric Kayne, a US financier, bought the crabber Fierce Contender and completed a conversion programme in 2007. Renamed Suri, the converted yacht was designed to be his shadow boat, carrying the toys and tenders for his main yacht.

By 2011, Kayne dropped his main vessel and sent Suri in for another round of conversion work, this time adding 10 metres to the boat to house all the toys, so she could become his main yacht. This work was handled by Boris Kirilloff, a Florida-based naval architect.

The result is Suri, a rugged expedition vessel boasting every type of tender and toy available on modern superyachts. Suri has also become a mainstay of superyacht charter in Southeast Asia and the South Pacific, handled by nearly every leading charter house in the world. At anchor, with her vast array of toys deployed, it’s easy to see why.

READ: Blowing up: FunAir and the boom in custom yacht inflatables

Suri began as a shadow yacht – carrying the toys and tenders for a larger yacht. Her owner later decided to make Suri his main yacht

Suri can facilitate adventures across land, sea and air. She has a large helideck and can come with an A-Star AS350 Squirrel Helicopter, a sturdy and popular model by Airbus used for everything from firefighting to military operations. A standard model has a cruising speed of 130 knots and four hours’ endurance with a service ceiling of 4,600 metres, putting mountaintops within range for your exploration. Suri‘s helicopter can seat four passengers, plus the pilot.

Helicopters are common on large superyachts, but¬†Suri¬†also has an amphibious seaplane at her disposal for an added aerial thrill. The SeaRey Seaplane carries two people – a pilot and passenger – and can take off from the water with just 400 feet of clear space. It can even touch down at a beach, making it possible to enjoy island-hopping tours.

But seascapes are what matter on a superyacht. The list of Suri‘s tenders is impressive. Among the most notable are a submersible for underwater exploration, a customised beach landing craft (which even has a large, drop-down ramp so that guests can walk ashore and barely get their feet wet), an amphibious Sealegs RIB, so guests can drive ashore, a wakeboat and a Stancraft wooden speedster boat, reminiscent of the early 1920s-era runabouts.

Suri also comes equipped with a large, centre-console tender with three outboards for roaring around in search of adventure. For the sailors in the guest list, there’s a classic gaff-rigged, all wooden dayboat.

The list of toys goes on and on. There’s scuba diving, kayaking, kite surfing (with an instructor onboard), inflatables, jet skis and more. A charter vacation on Suri could easily involve just spending some time with each of the on-water toys available.

There is even a new remotely operated vehicle, available on request, which can dive down to 300 metres and film in 4K. If you want to capture amazing underwater videos and photos of your adventures to boost your social media profile back home, here is the opportunity. 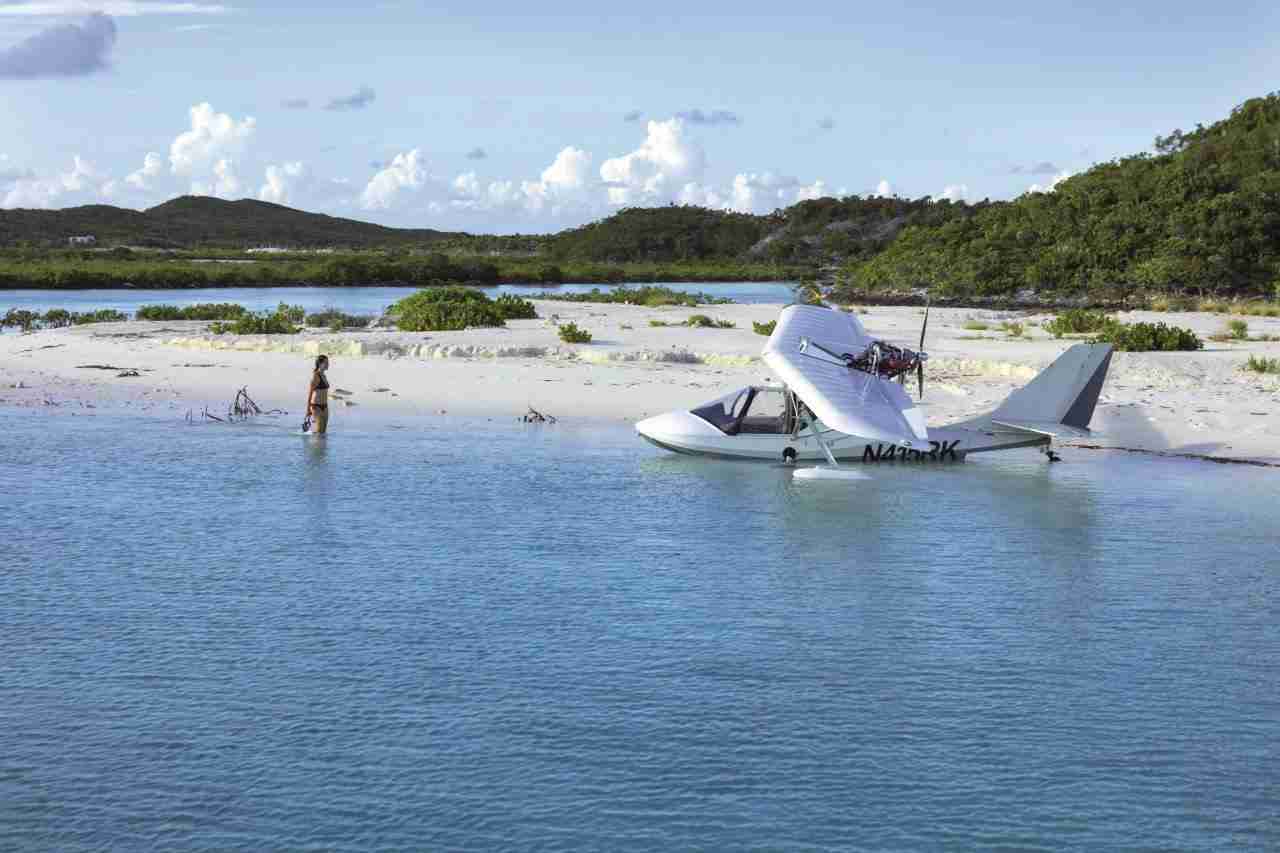 The ocean is amazing, and Suri is designed for guests to enjoy it to the fullest. But the oceans are also imperilled. Suri, her crew and her owner are therefore part of the International SeaKeepers Society (ISS), which supports marine science by using private yachts to do oceanographic research.

Citizen science on yachts typically involves small-scale marine research and does not necessarily require a scientist on board. However, ISS works with a number of institutions, including the National Oceanic and Atmospheric Administration, to facilitate ongoing oceanographic measurements that help with analysis of marine debris, weather prediction and quality control on satellites. 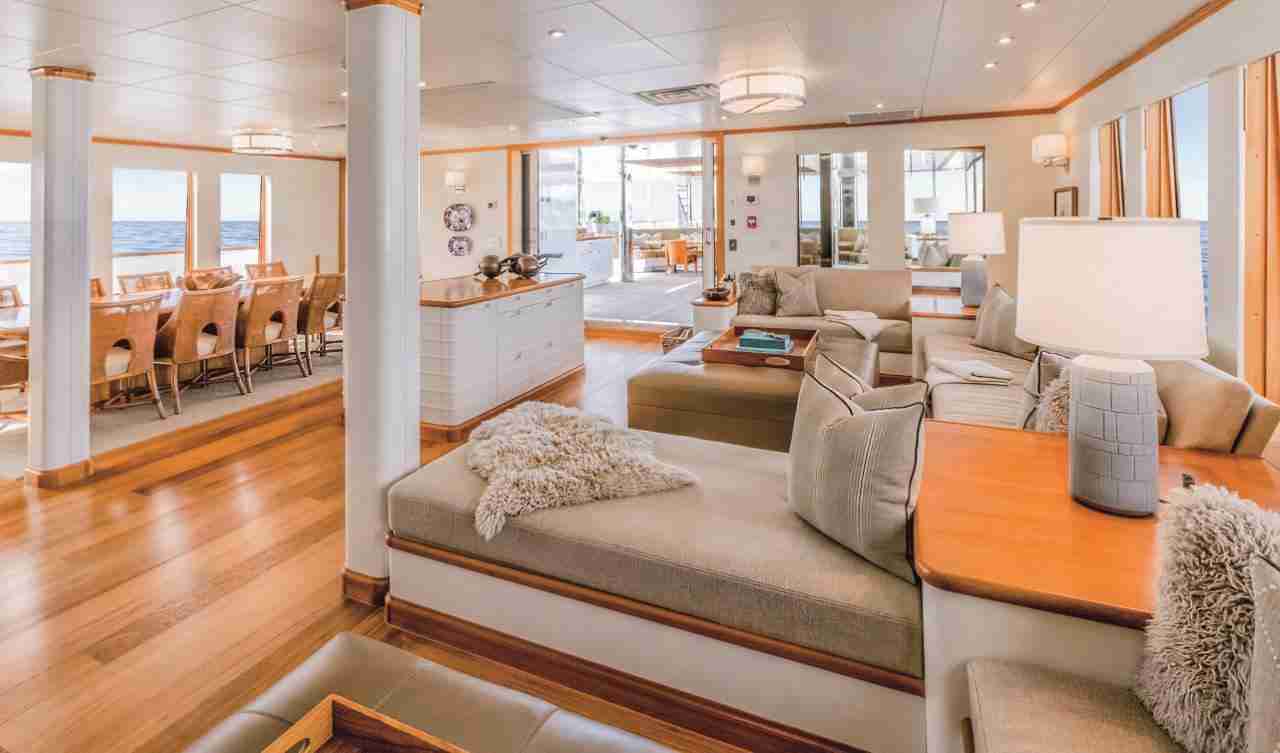 Of course, no time on a superyacht is complete without some relaxation. With all the options available for water sports enthusiasts, would-be explorers and those curious about ocean science, guests will be tired at the end of the day.

Suri‘s rough, work-boat exterior hides numerous places to relax after a day out. A massive sun deck with a jacuzzi also lets guests enjoy full service of drinks and fine food. The bridge deck features a large sky lounge that has been simply but tastefully designed, along with direct access to the helipad. Massive windows have been installed in the lounges on the upper decks.

Suri’s rough, work-boat exterior hides numerous places to relax after a day out

The owner’s deck has five ensuite cabins that are very large and well-appointed, while the owner’s cabin has its own office. The lower deck features a gym and wellness area, but most notably, a media room with “windows on the sea” – see-through windows looking down into the water underneath. Indeed, this is an exceptional place to unwind.

Suri was built in 1978 to handle the tough seas of the North Pacific. In addition to her seaworthiness, she also has range – she can manage nearly 10,000 nautical miles, adding to her ability to venture far from shore support. Truly, she has it where it counts.

Suri is available for charters with all major charter and brokerage houses.