Launched in 2019, Silver Yachts’ Bold is a remarkable yacht showcasing the yard’s ability to turn the shadow vessel idea into a particular form of explorer yacht 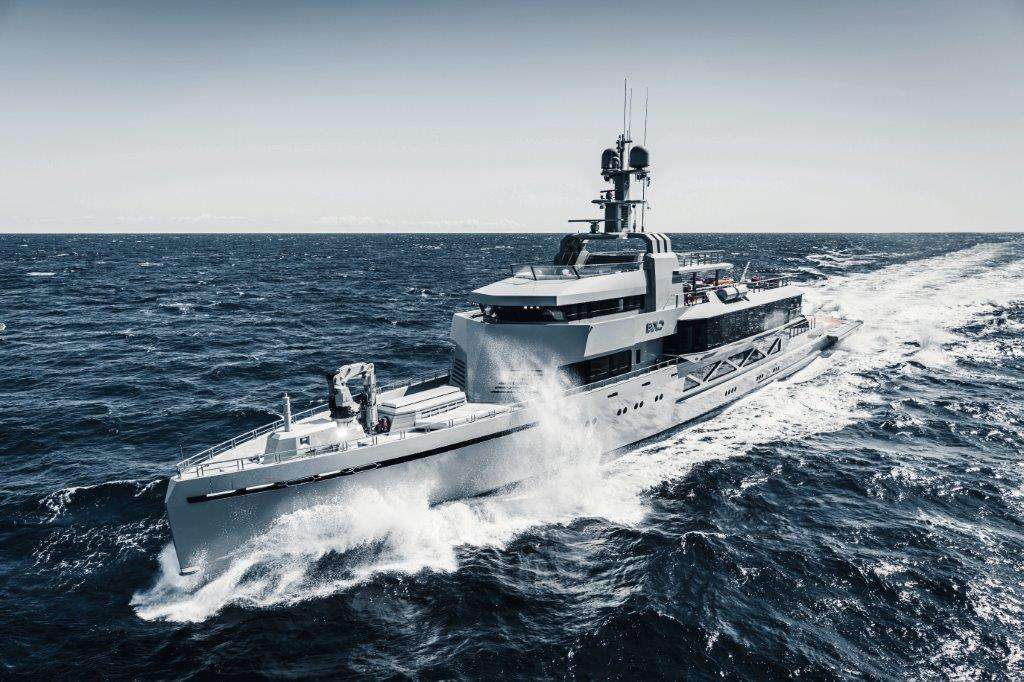 The superyacht Bold comes across as a militaristic-looking boat at first sight. The angular lines, towering bridge deck and grey finish are all comparable to the look of a naval destroyer. But a view inside belies that aggressive appearance, as guests and owner enjoy a brilliant colour palette and vistas that elicit thoughts of the Starship Enterprise and her mission to boldly go where no one has gone before.

Bold’s owner and the founder of Silver Yachts, Guido Krass, had a particular brief. He requested a vessel adaptable to any situation, be it a large charter party or as a workboat, carrying a range of toys while keeping fuel consumption low. 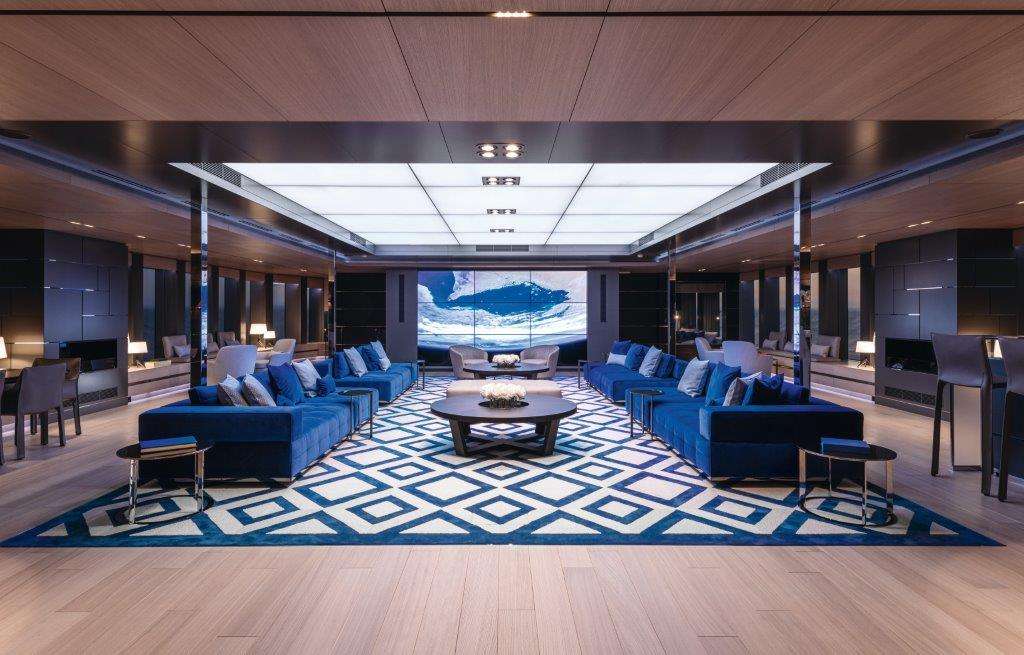 “I built the Silver line of sleek, elegant, fast, lightweight yachts with quite a narrow beam and limited volume. For me and my family, it was always sufficient. But the deck space for tenders was very limited,” said the owner. “(With Bold), you can land a helicopter, carry a 15-metre tender and lift up to six tonnes; we have no height limitations on this open deck.”

The concept for Bold was borrowed from the shadow vessel – a boat that carries the tenders and toys for a “mother” superyacht. Unlike a shadow vessel, Bold serves multiple purposes. Notably, the aft deck can carry and berth an Augusta 109 helicopter, along with three large tenders, including a limousine tender. 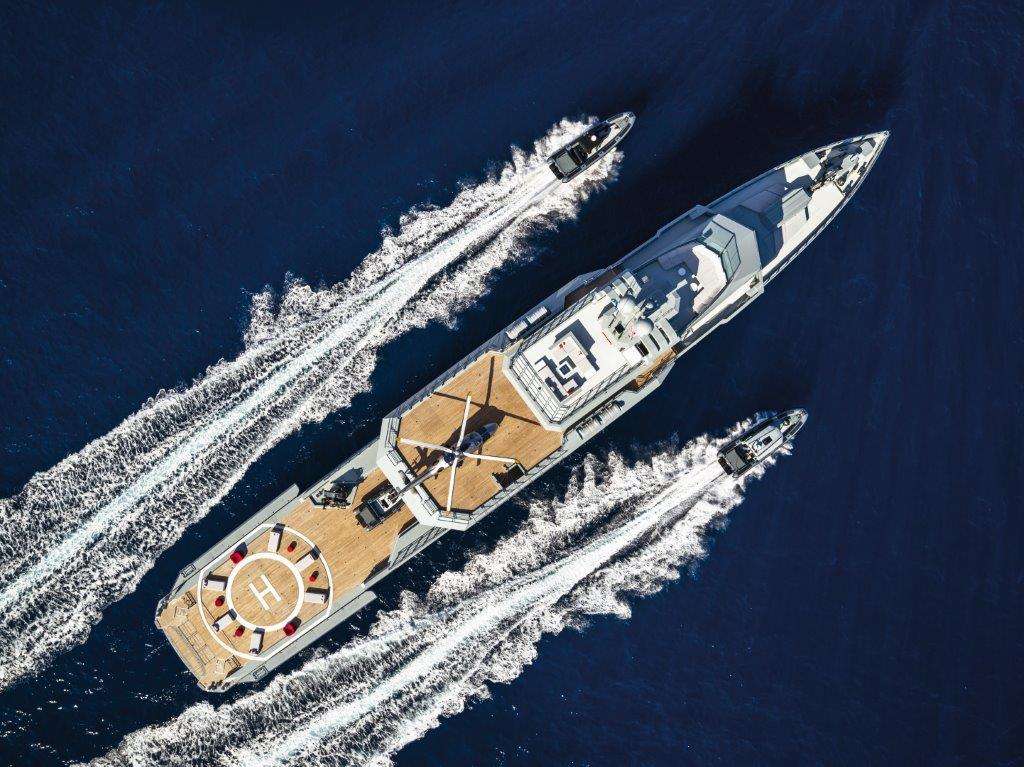 According to the yard, the biggest challenge in building Bold was changing the exterior styling from the trademark sleekness of the Silver series to the utilitarian look. Integrating all the features typically found on a shadow vessel, including features such as a fully compliant helicopter deck and operations, was a major issue. Bold is also a SOLAS compliant yacht, while maintaining all the features on a luxury vessel.

Silver Yachts is an interesting story of pan-Pacific superyacht building. The company was founded in Australia in 2005 as Hanseatic Marine by Krass, a German businessman involved in energy conservation products and solar energy. It was later rebranded to Silver Yachts, taking the name of its first few launches. Silver Yachts recruited legendary superyacht designer and naval architect Espen Oeino to develop a series of ultra-sleek, fuel-efficient and fast superyachts that could cross oceans at over 20 knots.

With Bold, Silver Yachts took their existing concepts and applied them to the growing thirst among the world’s billionaires for global exploration 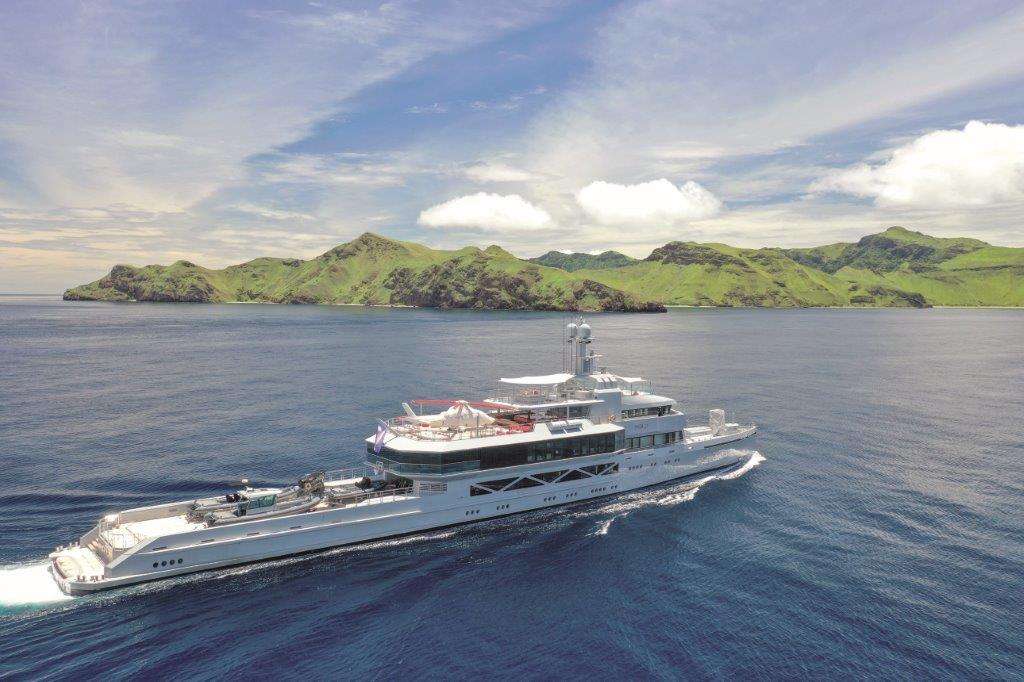 Silver Yachts, which builds only in aluminium, was later purchased by Chinese aluminium maker Zhongwang in 2017. At the time, the company announced the purchase would result in China-based production for the Asian market. That has yet to come to pass, but with Hong Kong’s booming yacht market during Covid-19 and signs that the Chinese government may welcome yacht purchases again, the plan may still work.

The first yachts to emerge from Silver Yachts were not explorer boats by definition. They could cross long distances at speed, thanks to the narrow hull form, but they were not necessarily intended for long periods away from shore support. 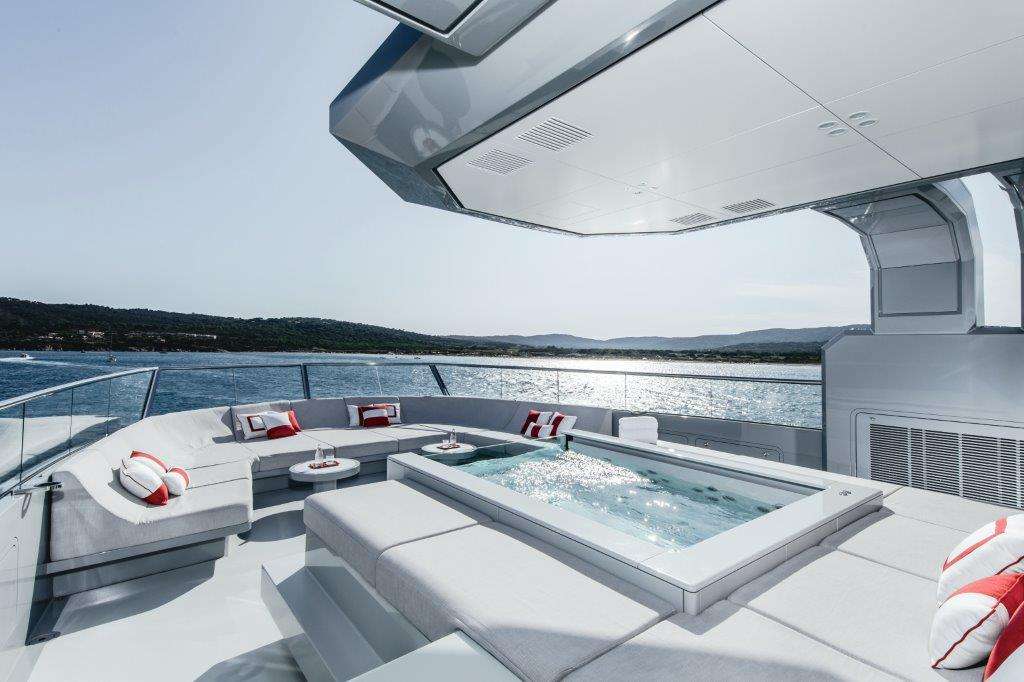 The forward-facing jacuzzi on the skylounge

With Bold, Silver Yachts took their existing concepts and applied them to the growing thirst among the world’s billionaires for global exploration. Bold retains the sleek contours and hull lines, low weight and shallow draught of her predecessors. This keeps fuel consumption low and allows access to shallow cruising grounds. Bold also boasts a top speed of 23 knots and a range of over 4,400 nautical miles at 14 knots, with a fuel capacity of about half that of other superyachts in the 85-metre range.

“Bold was to be a world cruiser that could operate in a somewhat economical way, carry a helicopter and have large, outside living areas and very comfortable indoor living areas with connections to the outside. She is contemporary, purposeful and sustainable,” says Oeino. He adds that Silver Yachts are built in aluminium, which is an easier material to recycle, and that with the yacht’s sleek hull form, less engine power is required to achieve higher speeds, meaning less fuel burn. “She is down to earth, like a Range Rover.” 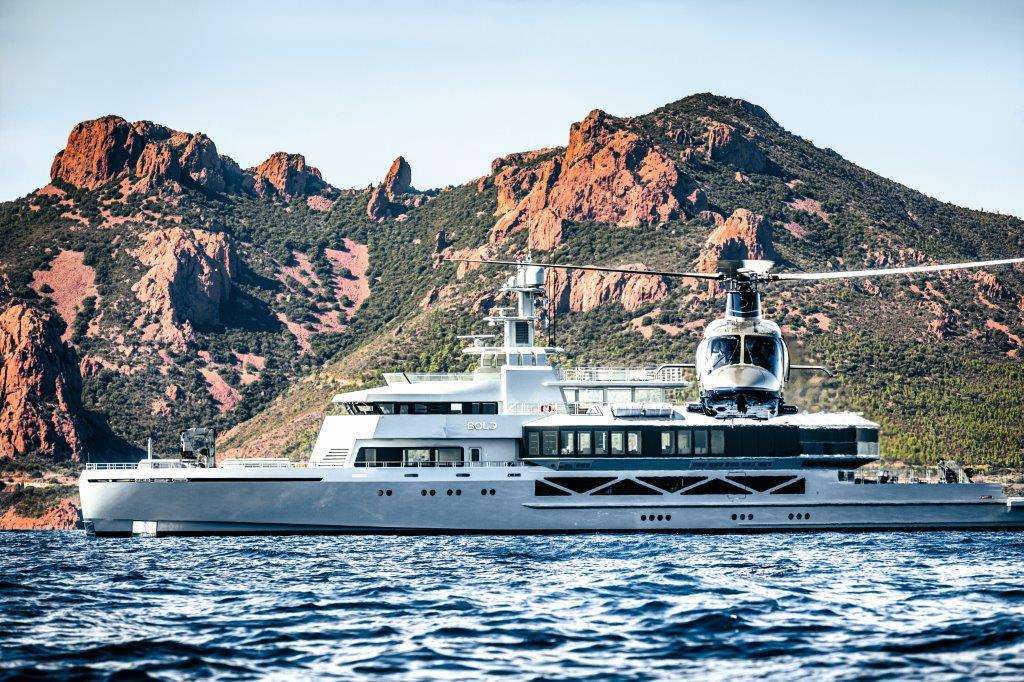 On the interiors, Krass specified loft styling, with floor-to-ceiling windows and an open plan arrangement. He requested a large Wintergarden with wraparound sliding glass panels and air conditioning for entertaining guests with indoor or outdoor dinner parties.

The owner wanted the interior to be luxurious yet practical, with storage incorporated wherever possible to allow for long-term provisioning 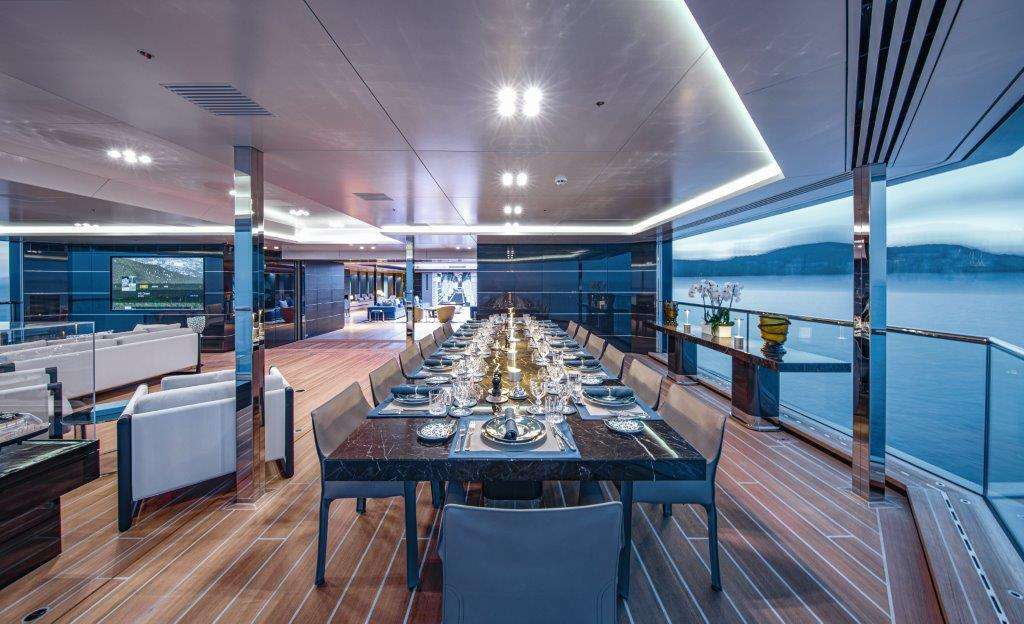 Large windows are a major feature of the interior

The owner wanted the interior to be luxurious yet practical, with storage incorporated wherever possible to allow long-term provisioning.

Bold’s deck-by-deck layout is an exercise in simplicity. The bridge deck consists of the helm station, captain’s office and quarters, and aft that is an outdoor dining and entertainment area. Up top, there is the sun deck, which has the lounging area and requisite jacuzzi. All the crew quarters, engineering, storage and service areas, plus galley, are on the lower deck. There is space for up to 21 crew to serve guests. 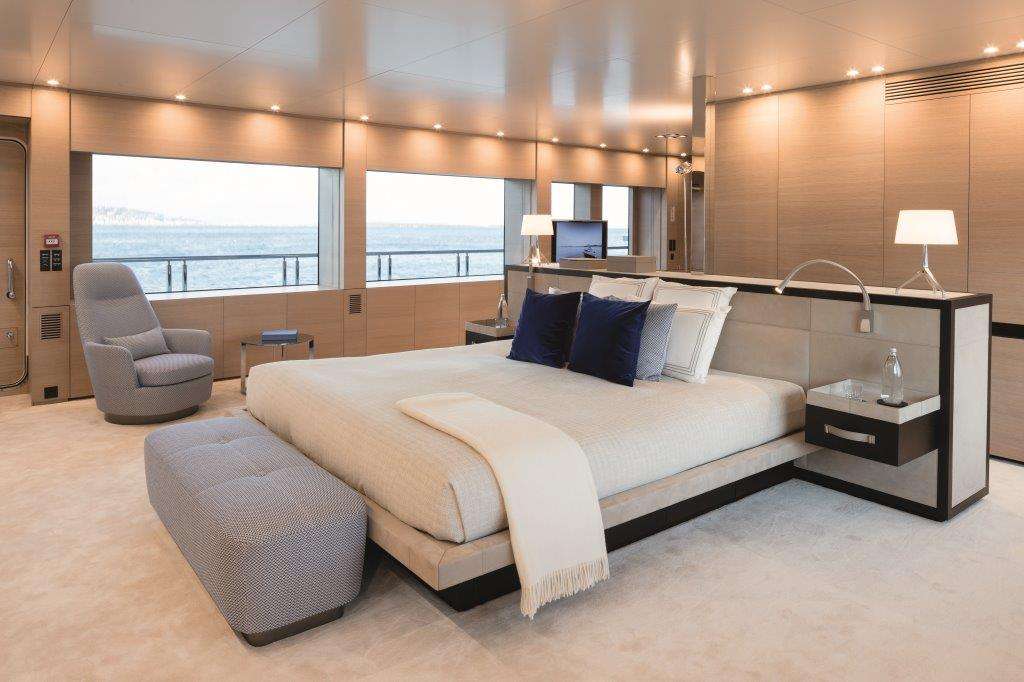 The main deck has a much smaller internal area, thanks to the need for helicopter and tender storage aft. Most superyachts have a large dining room, salon and a galley on the main deck; Bold only has guest cabins. The indoor dining and entertainment areas are all on the owner’s deck, with the owner’s cabin forward, with his-and-hers ensuites.

If you want to have fun exploring the world this summer and want to do it style, then go bold.