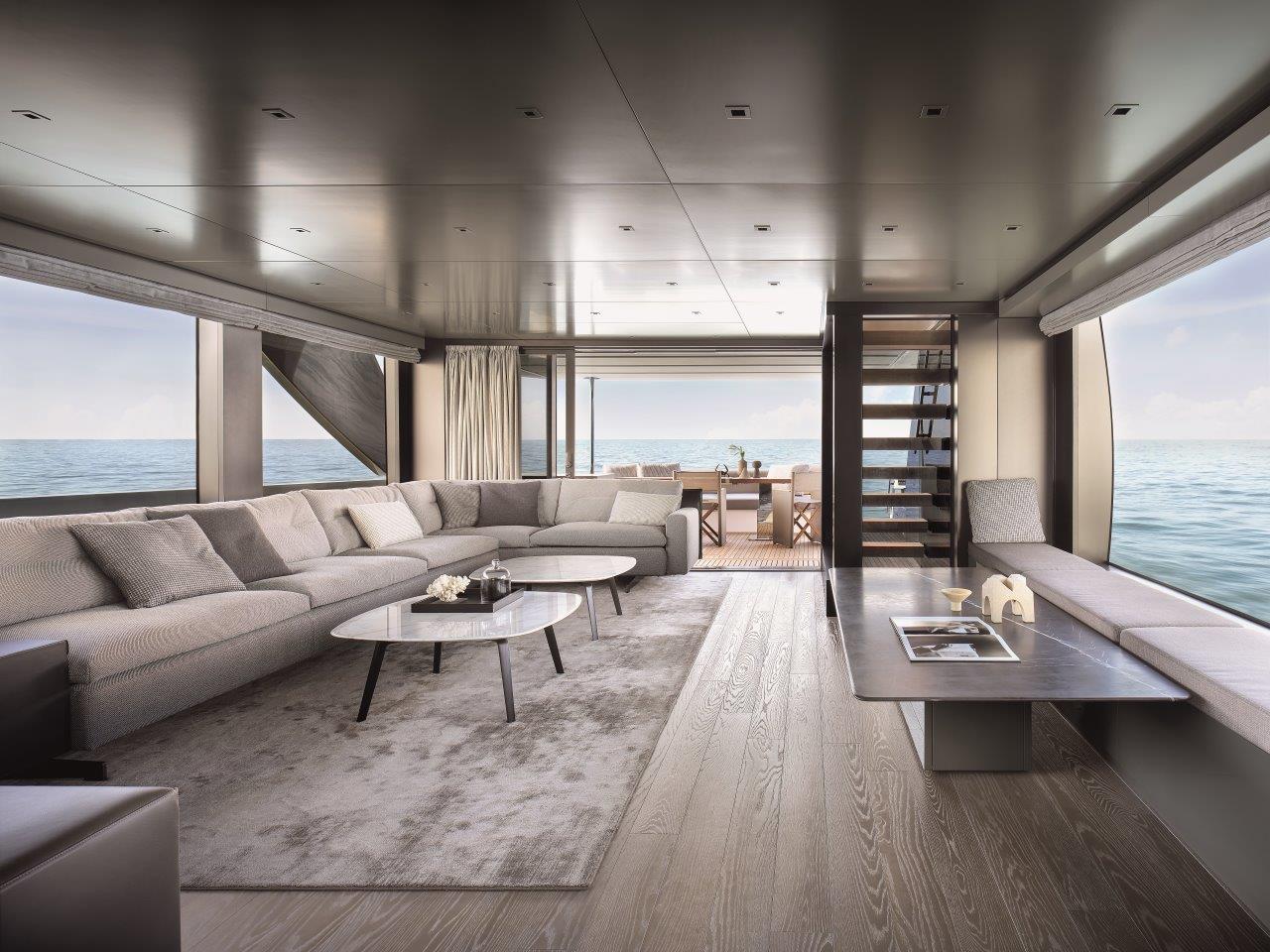 What a difference a deck makes – a side deck, to be specific. In the case of Asia’s premier hull of the Sanlorenzo SL90A, delivered to its owner in April, extra internal space is afforded by having only one side deck on each of the main and upper decks. The side deck, which runs starboard along the mid-section of the main deck, translates to an additional 10sqm more in the saloon than in the Italian luxury motoryacht maker’s other 27.6m (90ft) models, which have walkways on both sides.

As is the way with the Sanlorenzo Asymmetric line, the concept of one side deck on the main and upper levels makes the best use of internal space. However, the overall effect is still one of seamless equal balance on both sides, thanks to the way designer Bernardo Zuccon imperceptibly tweaked external lines. Rome-based Zuccon, of studio Zuccon International Project, has honed the aesthetics of this concept in the two former models in this series, which was launched in 2018. 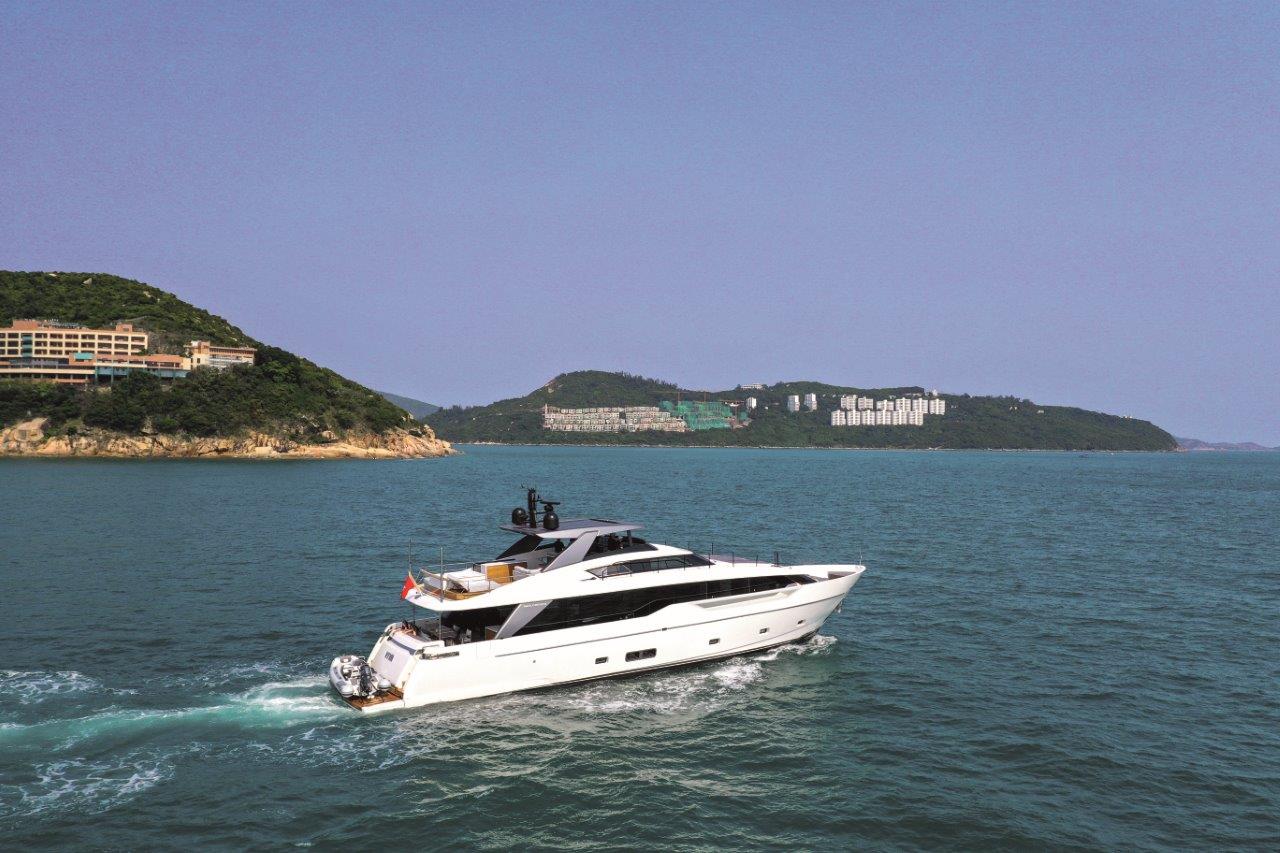 “SL120 and SL90A represent further confirmations of a path – which began with the introduction of the SL102 and now is consolidated with the presentation of these new models – of exploration of the field and the concept of asymmetry, which has allowed us to redefine the way of inhabiting the vessel,” he says. The spaces … have in fact been redesigned in a different key, offering the opportunity to perceive the sea from new and dynamic perspectives, which are constantly changing as you move around on board.”

Entry via the hydraulic swim platform and cockpit, with its optional Italian teak and chrome extendable riser table and mix of bench seating and wood and leather chairs, brings into sight a Sanlorenzo signature: the ‘floating staircase’. In other model lines, it appears in the saloon: opaque steps set into glass casing, leading up to the flybridge. In the SL90A, they rise from the port side of the saloon, with their glass sides allowing light and visibility through the saloon and into the covered cockpit.

Other options in this vicinity are a large wet bar, a barbecue station and a bimini for the swim platform. To be stored within the transom locker are a Jetski, diving equipment and Seabob, while a tender will rest on the swim platform. 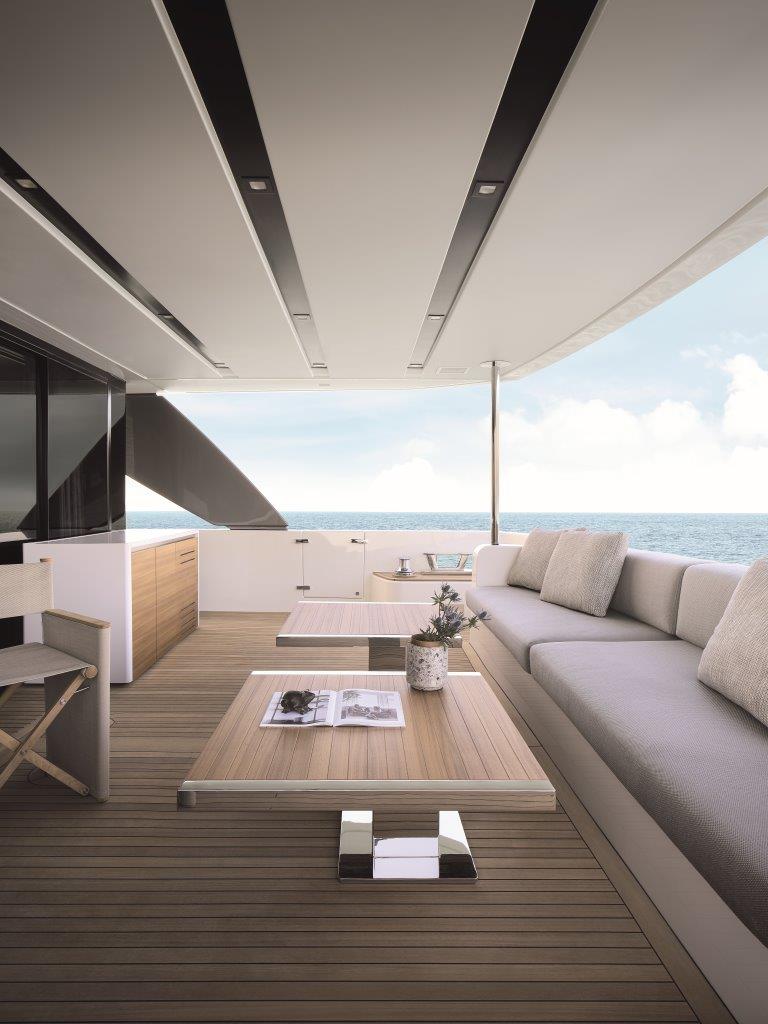 The covered cockpit is an elegant socialising spot

In the saloon, the owner requested a mostly monochrome, masculine palette, and such materials begin to make themselves known throughout the interior. To port, the spatial advantage of the absence of a side deck becomes evident, allowing a stone-topped riser dining suite positioned at full beam aside a picture window that can fully lower at the touch of a button at anchor.

The first-time yacht owner of this SL90A was very much a part of the design process, says the Simpson Marine Hong Kong broker responsible for the sale, Windie Tsoi.

“[The owner] appreciates the shipyard’s made-to-measure design, art and innovation within tradition,” she says. “This fits perfectly with his own taste and lifestyle.” He requested details such as a remote-controlled drop-down photographic dolphin artwork to cover a large flat-screen TV in the saloon, a top karaoke system, and custom-built teak bench seating to cover the anchor locker on the bow. And this was the first Sanlorenzo Asymmetric in Asia order with a request for a custom Jacuzzi tub that joins a cocktail bar on the flybridge. 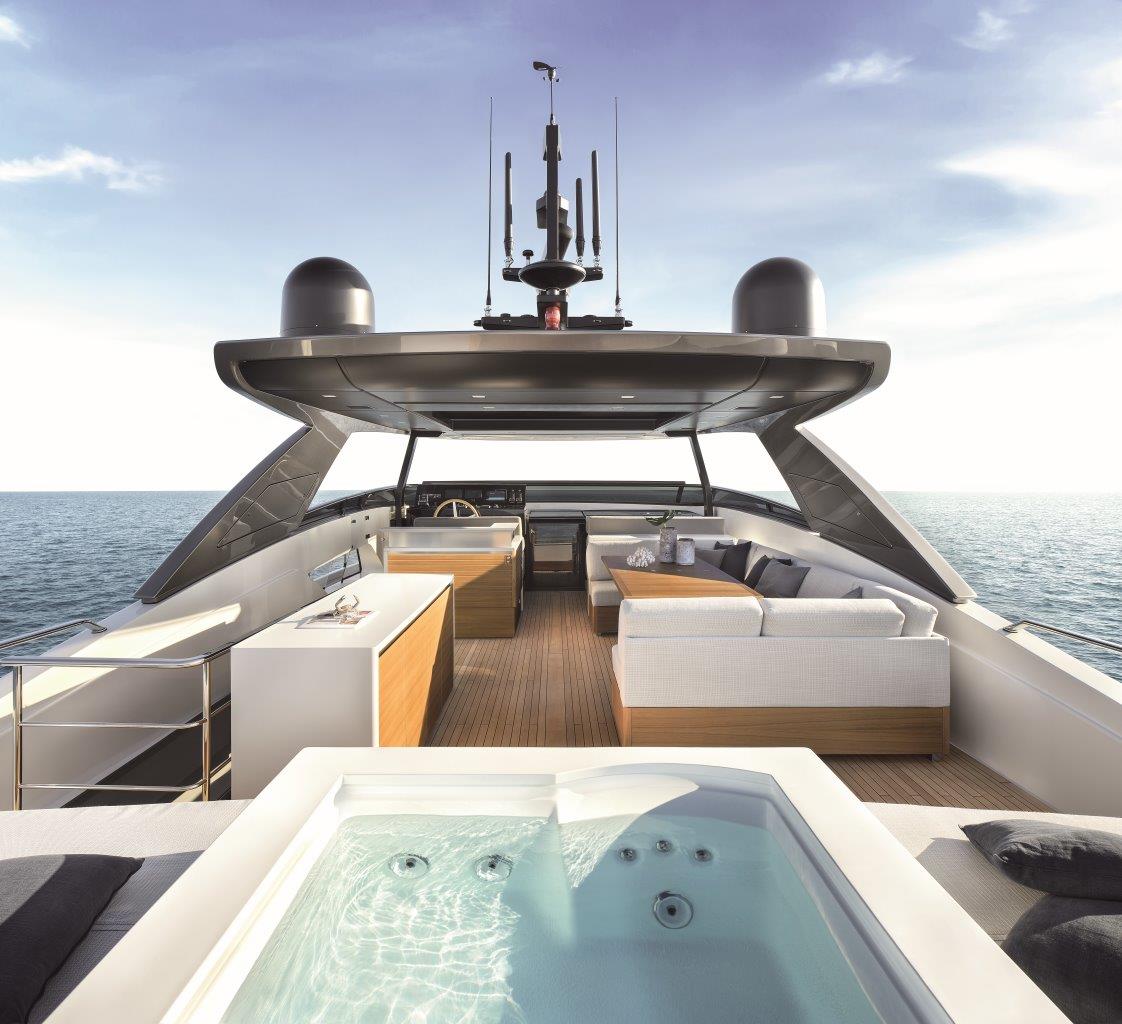 The flybridge is home to a helm station within an impressive relaxation station, with Asia’s first SL90A hull being home to a Jacuzzi tub as well as a cocktail bar

Forward of the saloon is the main deck owner’s suite, split over three levels. A couple of steps down from a roomy bedroom and dressing table/desk with dining table option, and starboard side deck access to the bow is a bathroom with a double wash basin. (The basin has been selected in warm copper-toned ceramic glass throughout onboard guest bathrooms and day heads). Down two more steps is wardrobe storage. All areas of this cabin have ceiling skylights, keeping the interior bright by day.

Just aft of the master suite on the main deck is the galley, which this owner fitted with industrial stainless-steel cabinets that wouldn’t look out of place in a restaurant.

Indoors throughout, including integrated into stairwells, indirect recessed lighting adds stylish warmth. Guest cabins in the lower deck are in double- and twin-bed configurations (the latter can be pushed together to become a double).

The upper deck is home to the wheelhouse and flybridge. The helm has a good connection with the main deck thanks to its glass sides; a modern and clear well-spaced two-screen control desk has wide visibility through its curbed windshield. Given the significant weight of this size of superyacht – just over 100 tonnes at full load – its maximum speed of 29 knots is impressive. 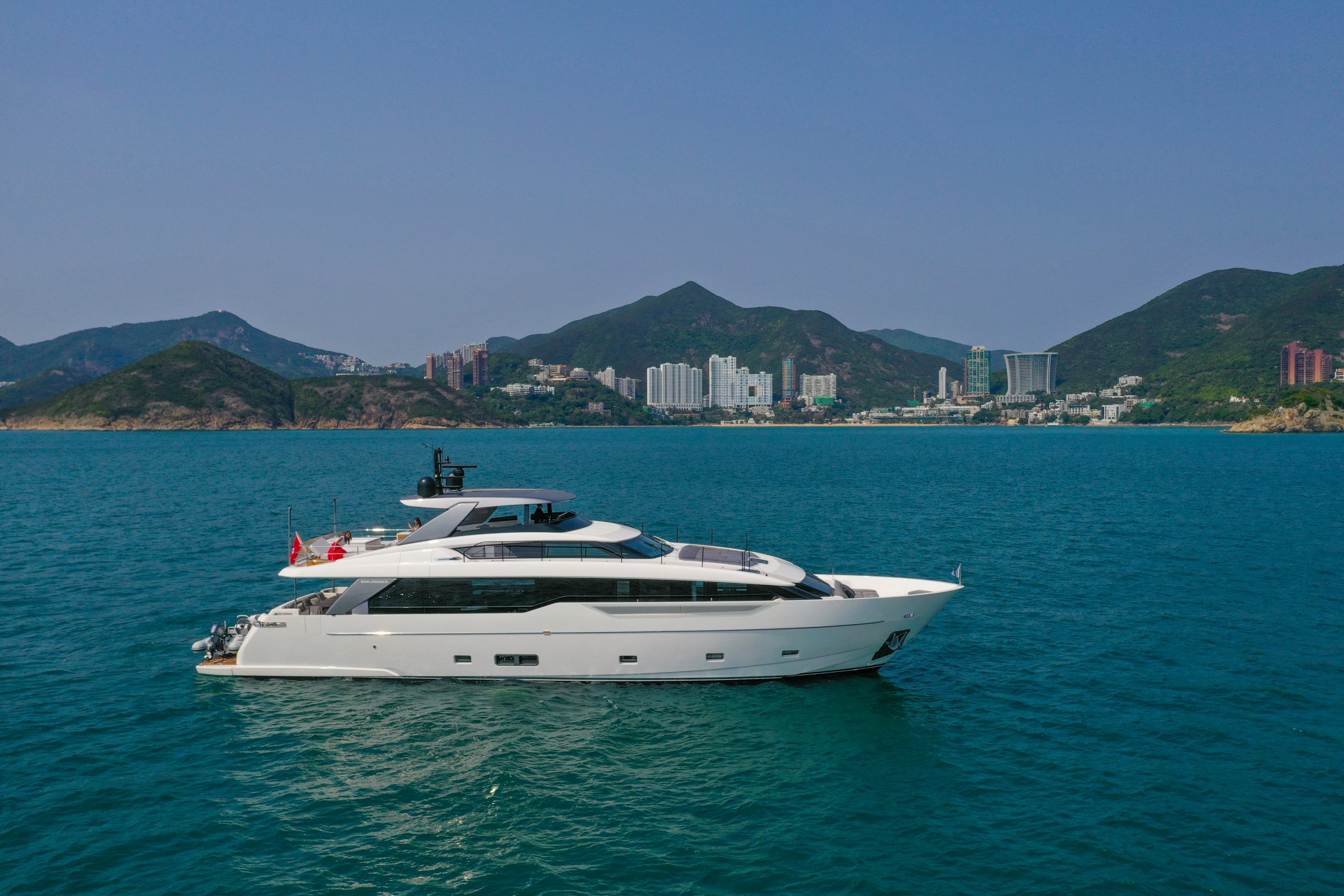 The aforementioned fly deck cocktail area has two separate white composite-top bar counters atop Italian Boffi cabinets; one counter is a larger L-shaped focal point. Refrigerators, freezers, an inbuilt sink and a grill station make this the second well-equipped wet bar on board. This sociable area, made more so with a dining area, loungers and sun pads, is under a hardtop roof with inbuilt electronically-controlled louvres that are a regular feature in Sanlorenzo yachts to allow in sunlight and aid ventilation.

The flybridge’s port side deck leads down to the bow and its large lounging area at its tip. Access to the master cabin, saloon and cockpit on the main deck from the bow is then on the starboard side.

The owner will use this yacht in Hong Kong waters, says Tsoi, and he is excited to visit its many unique islands. She adds that “the yacht will operate with four crew; we typically always assist in sourcing and supporting this team as much as possible.”

This, the first SL90A in Asia, is expected to be joined by a hull of the same model in late 2022. According to the dealership, the Asymmetric line itself “has been a huge success with multiple yachts from across the range in build”.