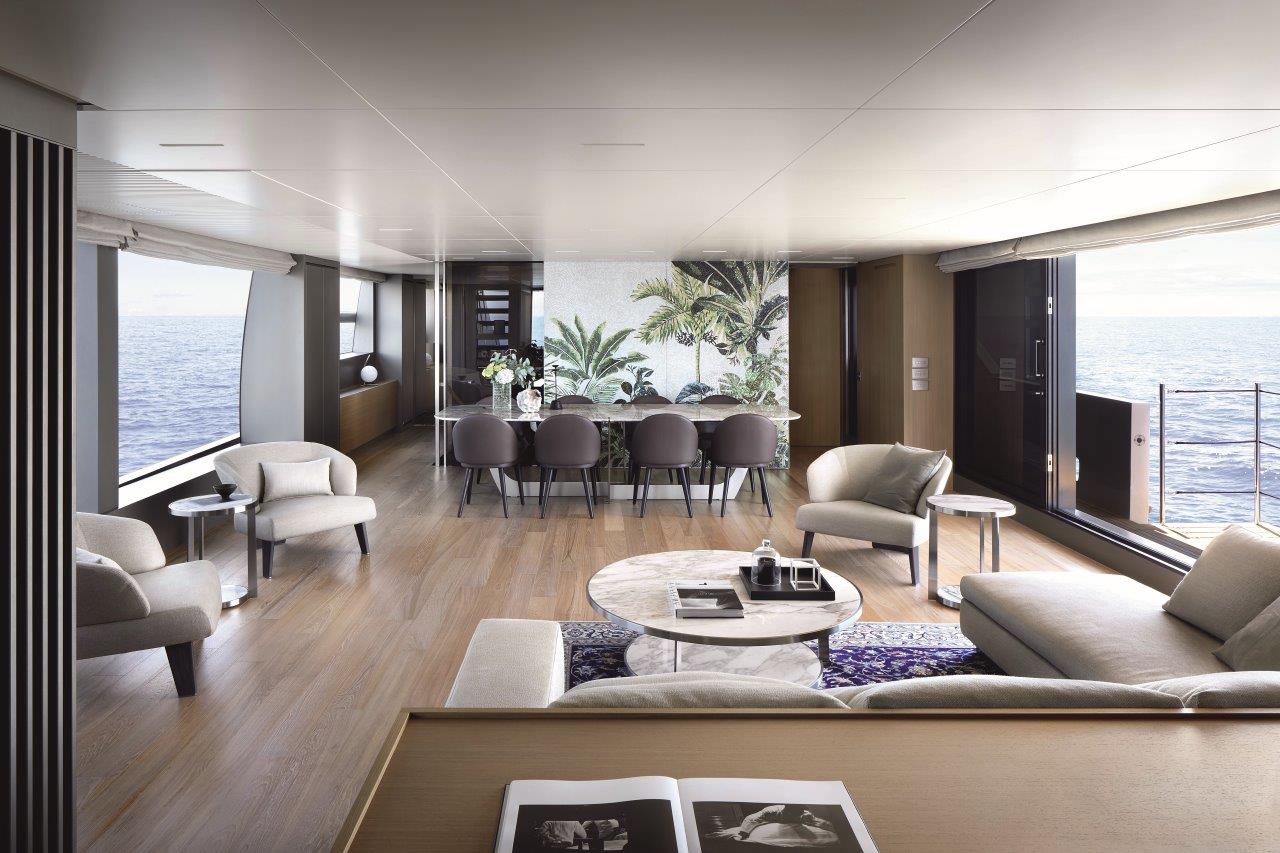 SL120 Asymmetric is the name of the new flagship yacht model of the asymmetric line by Italian luxury yacht brand Sanlorenzo. This fourth model in the series planing model with a length of 36.9 metres was a head-turner when it made its official debut at the Cannes Yachting Festival 2021.

The new SL120A showcases Sanlorenzo once again working on unexpected concepts of space to offer maximum internal volume and therefore increase liveability. And it’s the increase of that internal area that was presented as the purpose of asymmetry in this line’s design when the series premiered in 2018 with the SL102A.

The original concept was based on a layout that allows for expansion of the main saloon by removing the port side passage. It also maximises the connection with the sea by creating an ample dining room on one side, with full-height glazing, and a living area on the other side that opens onto a balcony. 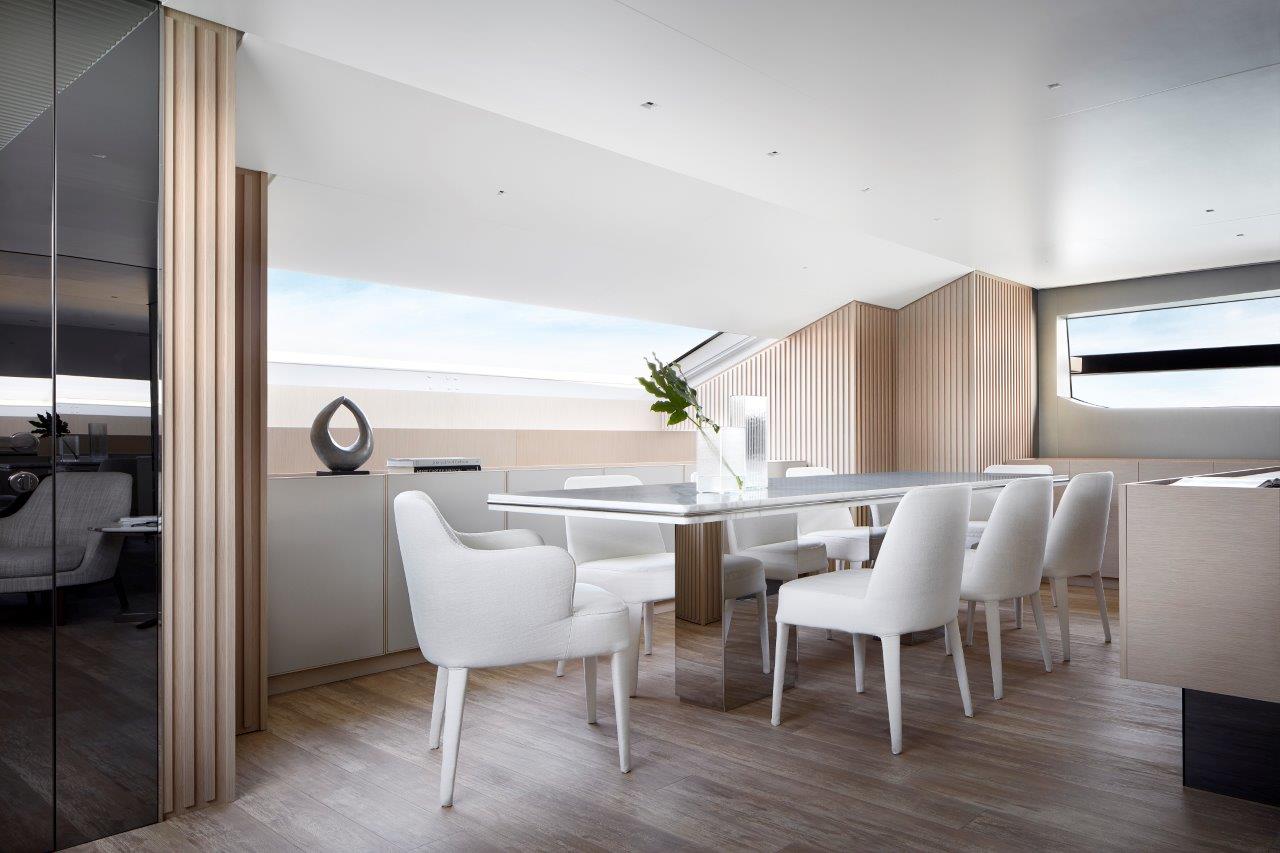 The notion of asymmetry is developed in a refreshed way on the SL120A, with a newly designed layout that generates yet greater use of internal spaces and improved access and interplay with outdoor zones.

On this model, Sanlorenzo applied the asymmetrical configuration only in the living area of the main deck, which extends from the cockpit to the centre of the boat. This set-up allows an expansion of this area by eight square metres by eliminating the starboard side deck and again creates a dining room with large picture windows on one side, a living area on the other, and a sliding glazed wall and a fold-out terrace to extend the balcony. And on this first hull – at the owner’s request – an all-glass lift was installed to link lower and upper decks.

Asymmetry is developed in a refreshed way on the SL120 Asymmetric, with a newly designed layout that generates yet greater use of internal spaces and improved interplay with outdoor zones

The new configuration also makes it possible to use the internal space of the contiguous forward zone that leads to the owner’s cabin, which spans the entire beam of the hull. This new asymmetric layout is possible thanks to the side deck now being placed only on the port side of the main deck, where it flanks the living area as far as the vessel’s midpoint, and then leads to the hard-topped flybridge and its dining area and sun deck, eventually descending again across the foredeck into an outdoor lounging area at the bow by means of a flight of steps. 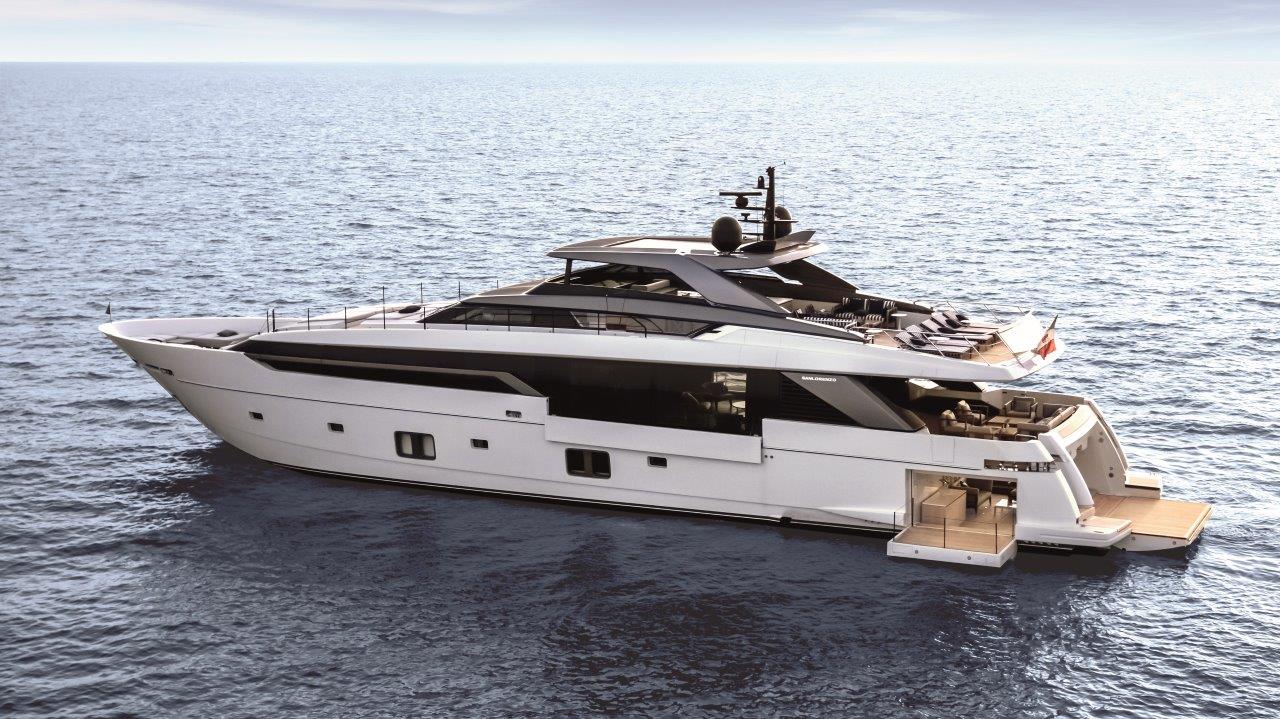 Fundamental to the design appeal of the SL120A is the organisation of its outdoor spaces. The lounging zone at the bow, for example, spills over two decks that are connected by a staircase, with direct access from the owner’s cabin. It is a space of 15sqm conceived for a range of different uses: while the foredeck is completely outfitted as a large sunbathing area, the upper deck features a table for outdoor dining, which can also transform into a sundeck; here, a standard C-shaped sofa facing the deckhouse has an option to be replaced with a Jacuzzi.

The best connection with the sea and fullest enjoyment of this model’s abundant outdoor spaces happen in the stern area of the lower deck. The garage there can metamorphose into a beach club with about 45sqm, when folding terraces are opened up, offering guests exceptional access to the sea, directly over the water. 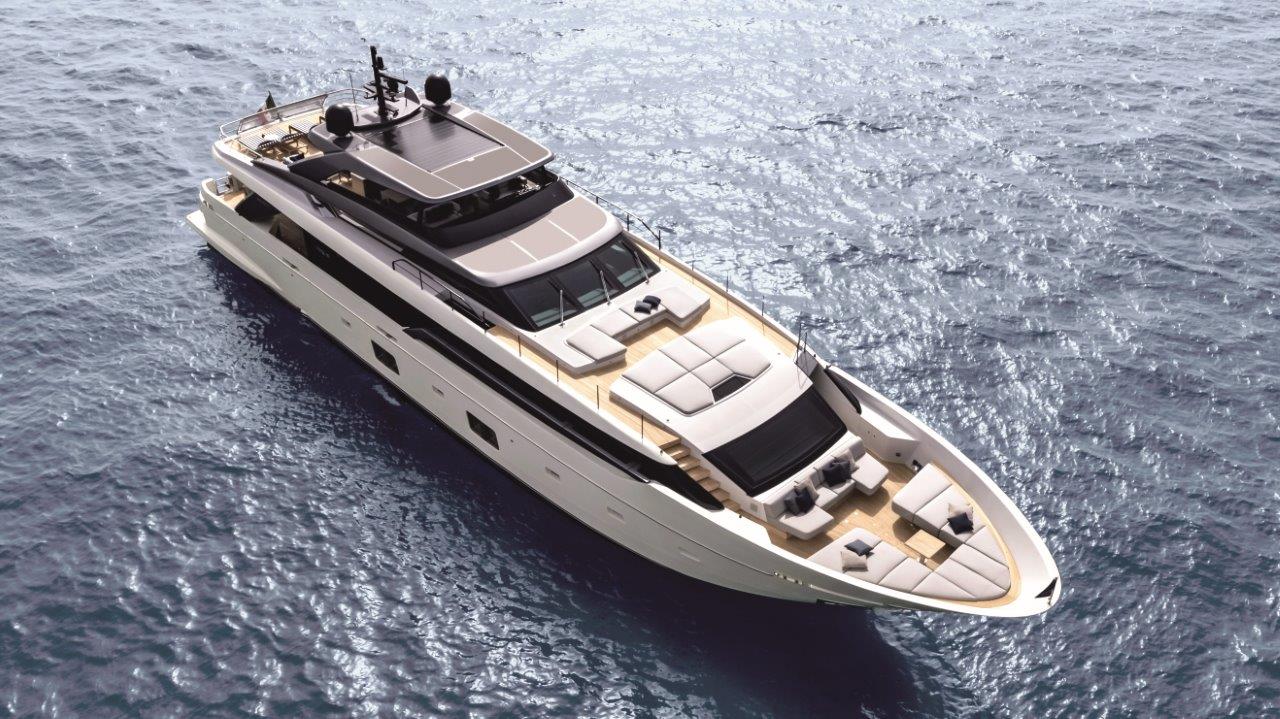 The stern is replete with outdoor areas

The concept of the Asymmetric line is the result of a meeting of various creative minds and talents – not all from a traditional yachting design background. The original idea of maximising indoor space, while not stretching to full beam on both sides, originated from Chris Bangle, the renowned American car designer (known for his transformations of BMW and Mini models, among others). From there it was a question of getting practical and brand-compatible elements interpreted by Sanlorenzo technicians and designer teams at the shipyard, along with final design honing by Rome-based Bernardo Zuccon of the studio Zuccon International Project, who was responsible for the external and internal lines of the SL120A.

Since the line’s inception, a main challenge of that design and engineering collective was to keep the strong and simple Sanlorenzo exterior lines intact, while housing innovative irregular proportions within.

It’s not all about design: a top speed of 27 knots for a 37-metre yacht carrying premium materials and finishes is a pretty impressive result

Once again, this is well achieved by the new flagship SL120A. And it’s not all about design: a top speed of 27 knots for a 37-metre yacht carrying premium materials and finishes is a pretty impressive result from the twin 2,600hp MTU diesel engines, and cruising at 10 knots nets a range of just over 1,800nm (twin 2,400hp CAT engines are another option). 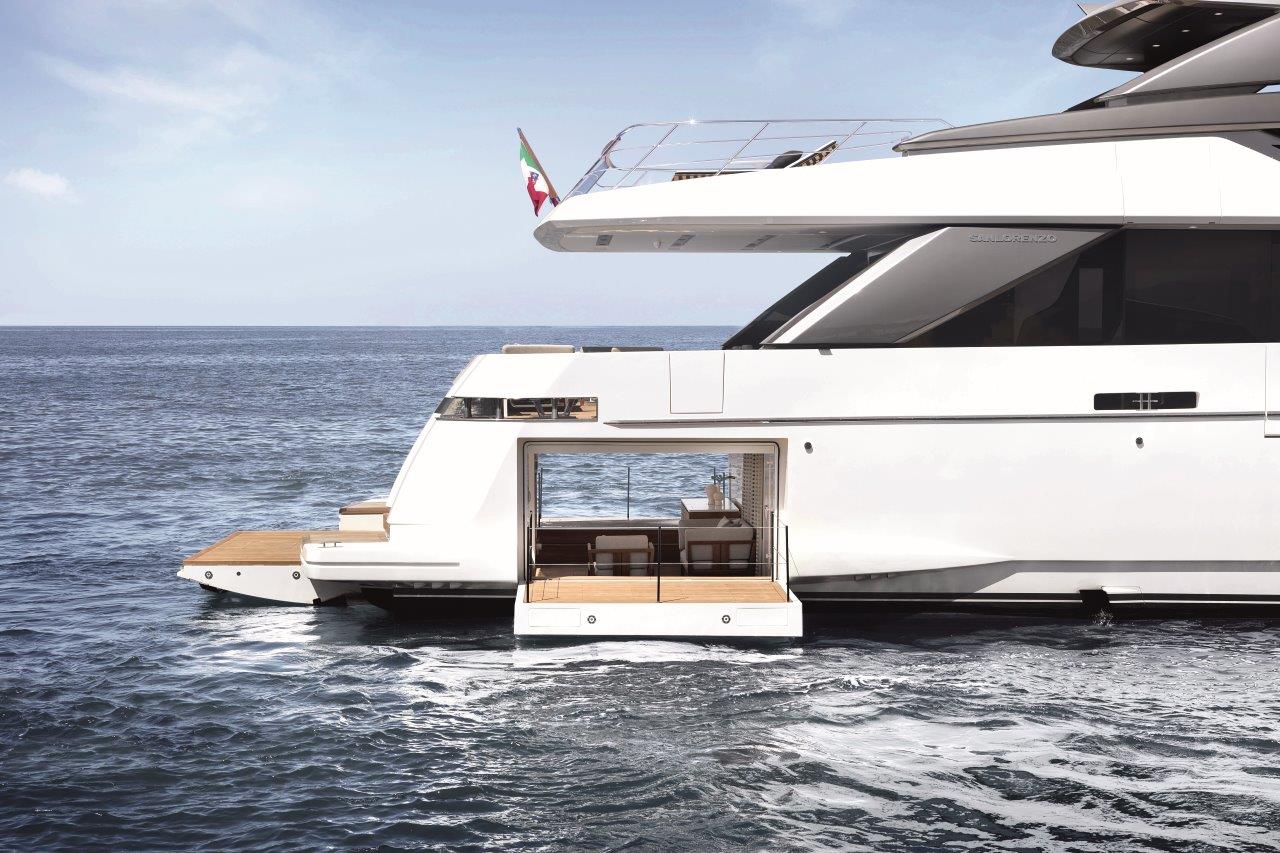 Having been well received since it debuted at Cannes 2021, the SL120A was also awarded in the Best Layout category in the World Yachts Trophies 2021 in France.

The shipyard, when asked about responses to this new Asymmetrical flagship so far, told Asia-Pacific Boating: “Positive responses have represented confirmation of our ability to forecast the evolution of the market and to anticipate it with new solutions. There is always room to create something new and relevant in our industry, and it is our role to understand the needs of our customers and to imagine their future ones.”