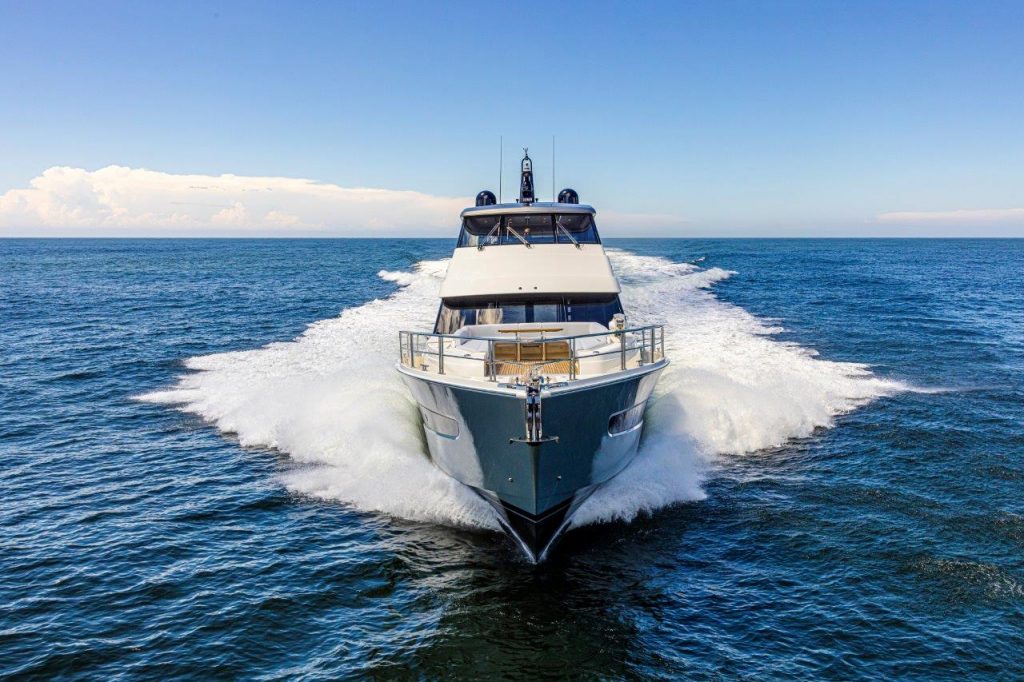 Striking new aesthetics from a European design house and a range of new smart systems has the Riviera 78 MY pushing into superyacht territory, as I found out when taking the first hull to sea on Australia’s Gold Coast. These yachts are intended as bluewater adventure boats, and so come with long-range capability and levels of self-sufficiency to match. Many systems are duplicated or can be over-ridden, so are ideal for those long Pacific sojourns.

The Riviera 78 MY tops the company’s fleet of large flybridge cruisers, following the launch of the 72 model in 2018 and a raft of its coupe models, that total about 5,700 hulls, built during its 40 years of building on Australia’s Gold Coast. Riviera now specialises in the 35 to 78 ft (10.7 to 24m) market for premium-level motor cruisers. By extending the hull of the successful 72, it pushed the boundaries of this focus. 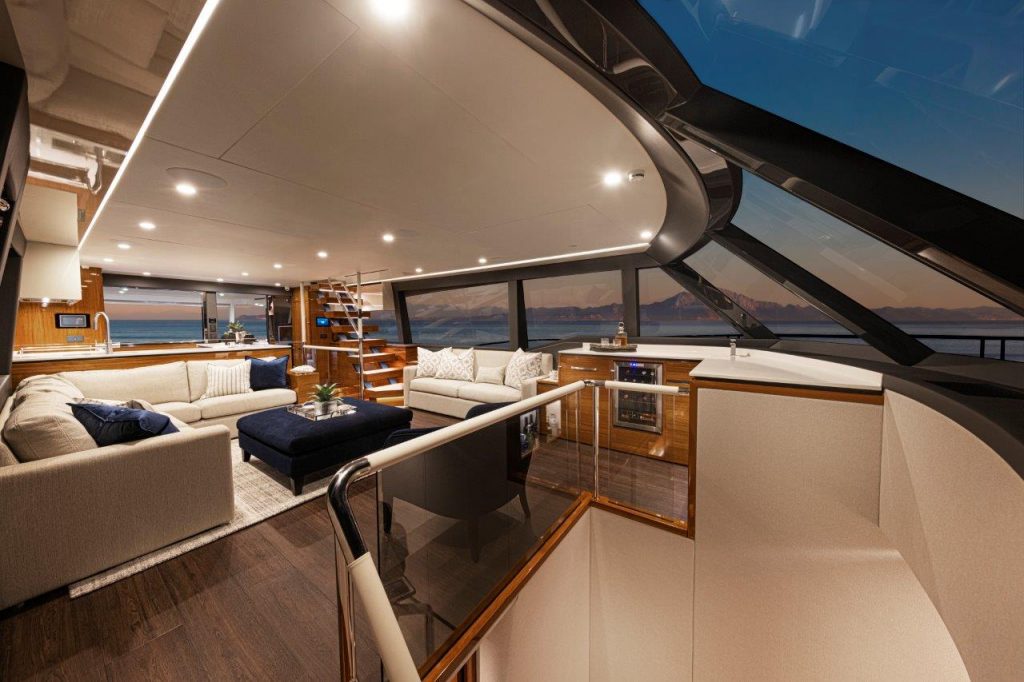 The saloon is devoted to relaxing

“We began by asking our customers of larger Rivieras what they would like in a slightly longer model, so they have given valuable input to this 78 MY,” explained brand and-communications director, Stephen Milne. Customers include Asia-based owners, Jacky and Rudi Djik, who are upgrading their Riviera 68 to take delivery of hull number two of the 78 MY in Phuket, Thailand. Seeking a vessel with a longer range and more carrying capacity for adventures was a sentiment raised by the Djiks, who plan to explore the Andaman Islands and return to Myanmar’s Mergui archipelago.

As I boarded the new 78 MY, the words from Riviera CEO, Rodney Longhurst, echoed in my head about the “timeless and contemporary” design. “Superyacht styling” was his next phrase that came to mind as I strode on the vast hydraulic teak swim platform and gazed into the dinghy garage which can house a jet ski (the foredeck also has a davit to hoist a dinghy there, when offshore). Teak is hard to beat when the sun beats down on bare feet, so is welcome on the swim platform and on nearly all walking spaces around the Riviera 78. Practicalities also abound: powered capstans, large fairleads and equally generous cleating. Given this boat weighs more than 57 tonnes and will have substantial windage, these are welcome features. 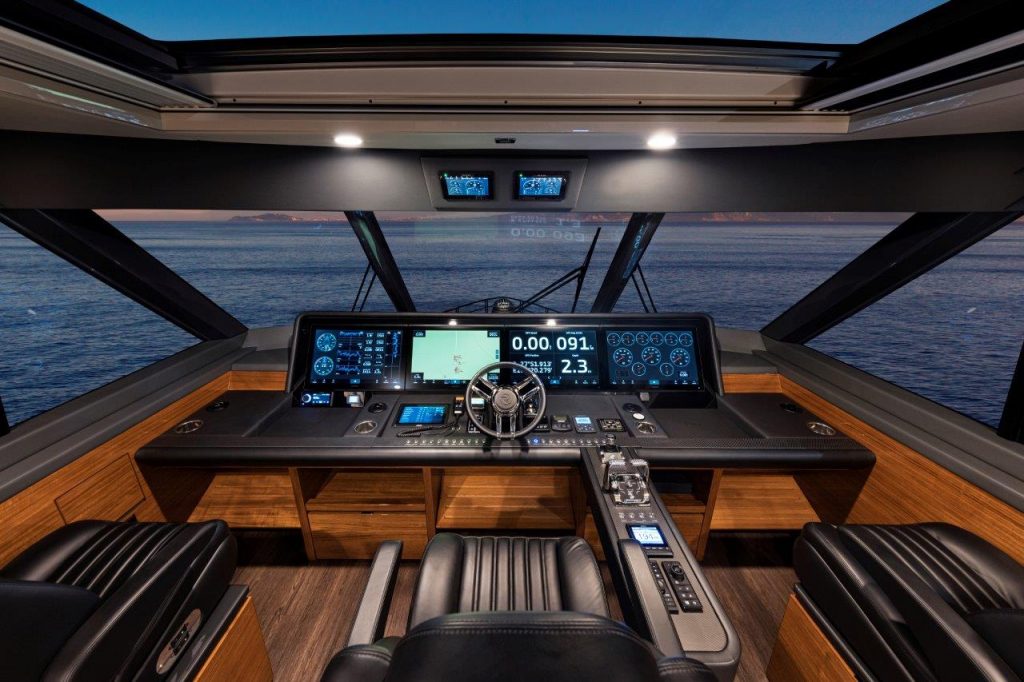 Moving along narrowish side decks, the bow is equally well appointed, thanks to a spacious sunken entertaining area with seating for eight, or at least when an optional tender is not in place. The bow area can also be covered with a fold-away bimini – an ideal space at anchor for sun worshippers or to relax and savour a drink after a day’s cruising.

An internal staircase leads to the large flybridge. It has a separate lounge and alfresco dining area with all navigation done at the forward section, along with two remote helm stations outside. At the console, the skipper is on the centre line of the vessel, so can judge both sides equally and see aft, via the toughened glass door (with cameras enhancing the lower views aft).

The console is dominated by a row of three 24-inch Garmin Glass Bridge navigation screens, ideal for large format views of charts, radar, cameras and sonar; Twin Disc joystick-transmission is used for slow manoeuvring, with two power modes. The extended flybridge creates a large entertaining area, mostly covered, with movable seating at its aft and a covered lounge to starboard with a wet bar on the port side, with bench, sink and fridge. 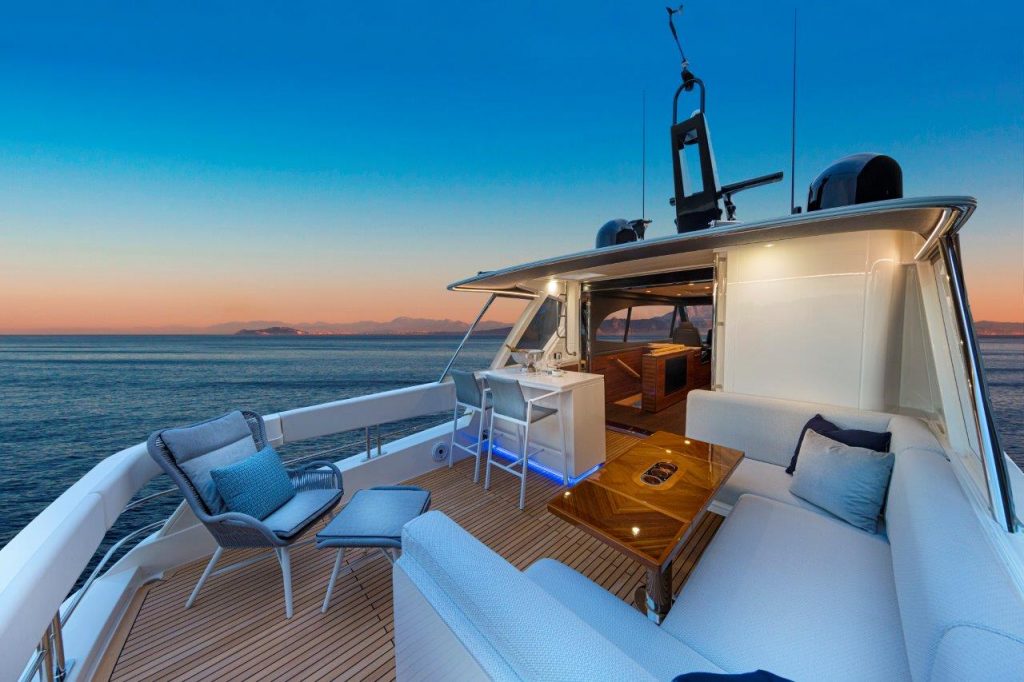 The saloon is devoted to relaxing while cooking is done at the rear galley. Up forward, the grand entrance, with atrium-style natural light from the tall surrounding windows, illuminates the stairs to the accommodation. The décor of handcrafted teak joinery that is grain-matched, contrasting with black panelling, neutral-coloured cushioned benches on three sides and wool carpeting, sets a calming tone of this vast saloon.

The U-shaped galley is extensively fitted with appliances and deep double sinks, surrounded by worktops. There’s a four-burner induction electric Miele stove with a large microwave convection oven and a dishwasher; plus views aft to inspire the chef. Perishables can go in the tall upright fridge and low double freezer drawers. Details include holders for glasses and crockery, while the washer/dryer plus custom ironing board are secreted in the aft crew quarters.

The clear views all around from the flybridge gave me the confidence to accelerate, with only the faintest whine from the quad turbos that pushed the hull to an impressive 34 knots 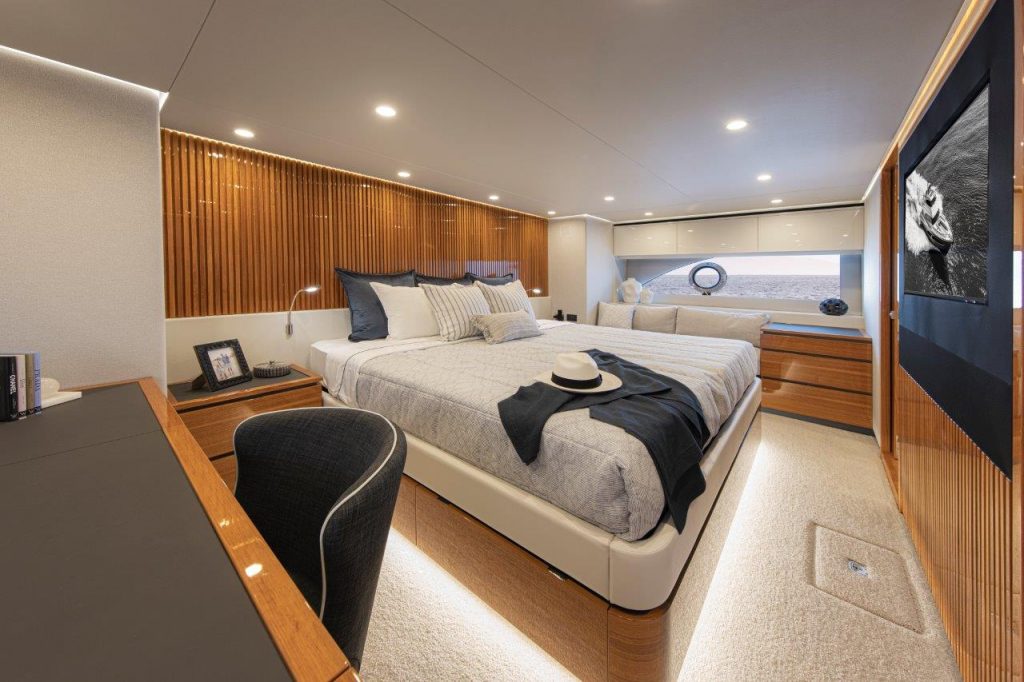 The master stateroom with king-sized bed

Descending to the four cabins via the wide teak atrium stairwell, reveals a layout of full-beam owner’s suite aft with VIP Vee-berth and two side cabins with single beds. Set low in the hull, the owner enjoys a king-sized bed with sprung mattress against the aft bulkhead, which adjoins the crew quarters – insulating it from the engine-room noise. A large walk-in wardrobe borders the long vanity desk and drawers port. Starboard has a three-seater lounge with generous walk-around space at the bed foot between. The Vee berth uses the deep bow for its volume and airiness, enhanced by the sealed windows and double opening skylights.

Australia’s La Niña summer was the first test for the new 78 MY because the rain cascaded down as I sat at the skipper’s leather chair to take the controls. My first job was to find some swell, so we slowed at the ocean entrance, called the Seaway, to deploy the Humphree stabilisers. They automatically paddled to quickly reduce the hull’s rolling as they self-adjusted to the impact of the side swells – clever stuff. 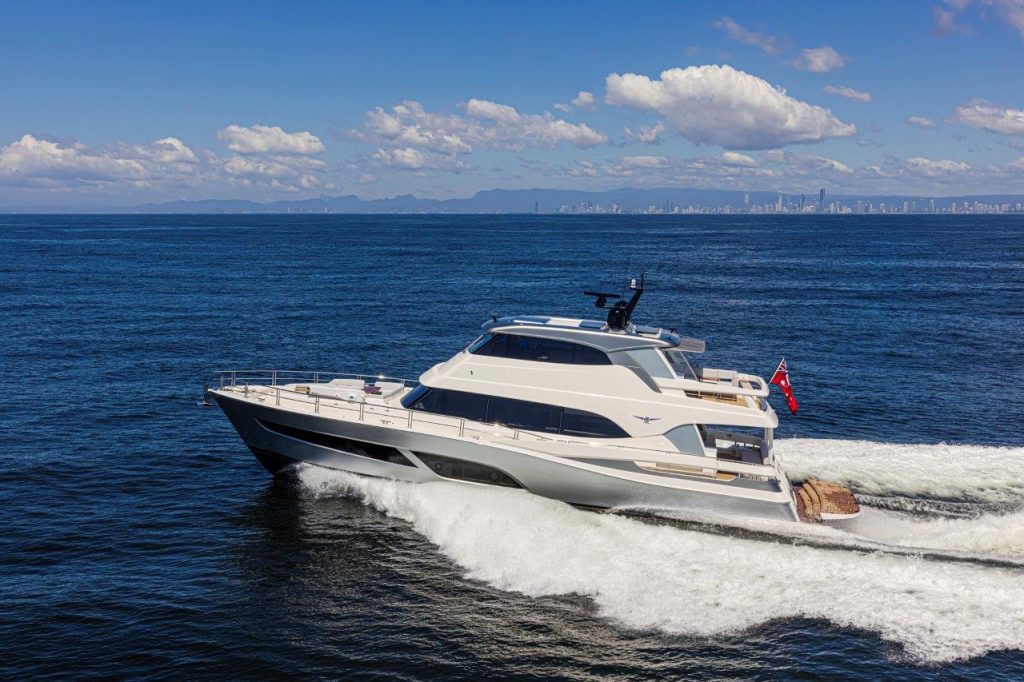 The powerful 2,000hp MAN V12-1,550hp engines were so easily controlled that I found it remarkable when the Garmin screen showed 22 knots, the ideal cruising speed (472 litres per hour fuel burn at 1,850rpm giving about 475 miles range; maximum range for this boat is 1,360, at just under 10 knots). Clear views all around from the flybridge gave me the confidence to accelerate, with only the faintest whine from the quad turbos that pushed the hull to an impressive 34 knots, which reduced the range to about 400nm. Slow handling, in reverse with a stiff breeze equally went predictably as the Twin Disc joystick was pushed in my desired direction of travel, the fore and aft thrusters holding the tall hull against the wind as it went arrow-straight astern.

Even the amateur skipper, or boating journalist, can master this mini-superyacht which says a lot about the 78 MY and the Australian company which built it. Of course, you don’t need to take my word for it, because you can see hull two around the waters of Phuket.