One of Riva's classic designs is reimagined as the 68' Diable, blending the brand's old-school charm with a host of desirable features, including a spacious bow lounge and a sporty hard top that will prove attractive to owners in Asia 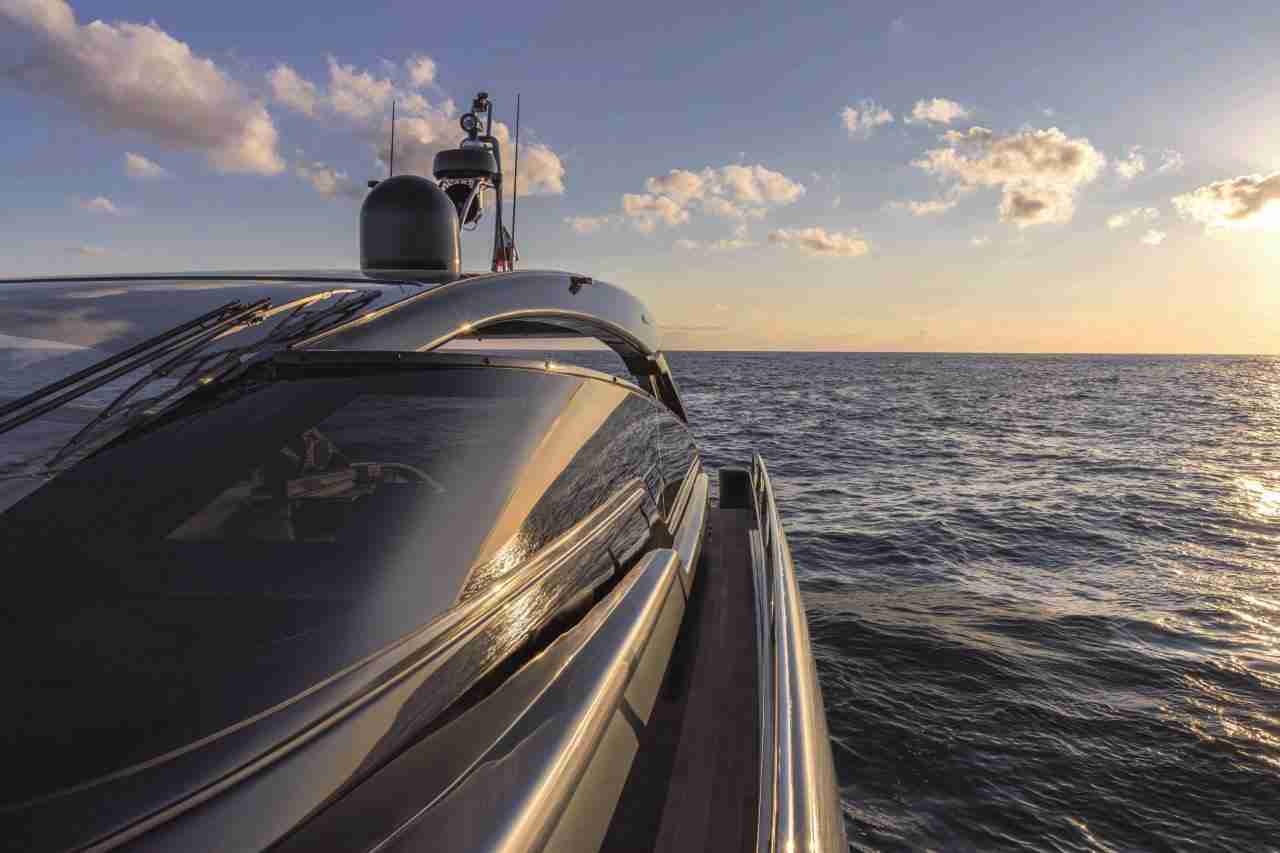 With all the heritage accompanying the Riva name, it’s no surprise that the Italian brand is keen to dust off its classics and give them a contemporary update. The forerunner to the new Riva 68′ Diable was the open-topped Riva Diable, which was in turn based on the flybridge Riva Superamerica hull – a flagship of the yard’s fibreglass production for two decades from the early 1970s. The release of the 68′ Diable demonstrates that elements of Riva’s classic designs continue to stand the test of time. Still, the brand is pushing things forward where it matters, both in liveability and technological innovation.

The 68′ Diable is a 20.7m-long open yacht offering a distinct evolution from its forebears while retaining all the hallmarks you expect to find in a Riva: elegance, exhilaration and a serious sense of style. Muscular touches to the exterior, including a curved windshield, encompass Riva’s recent design direction, reflecting a sportier take on luxury. 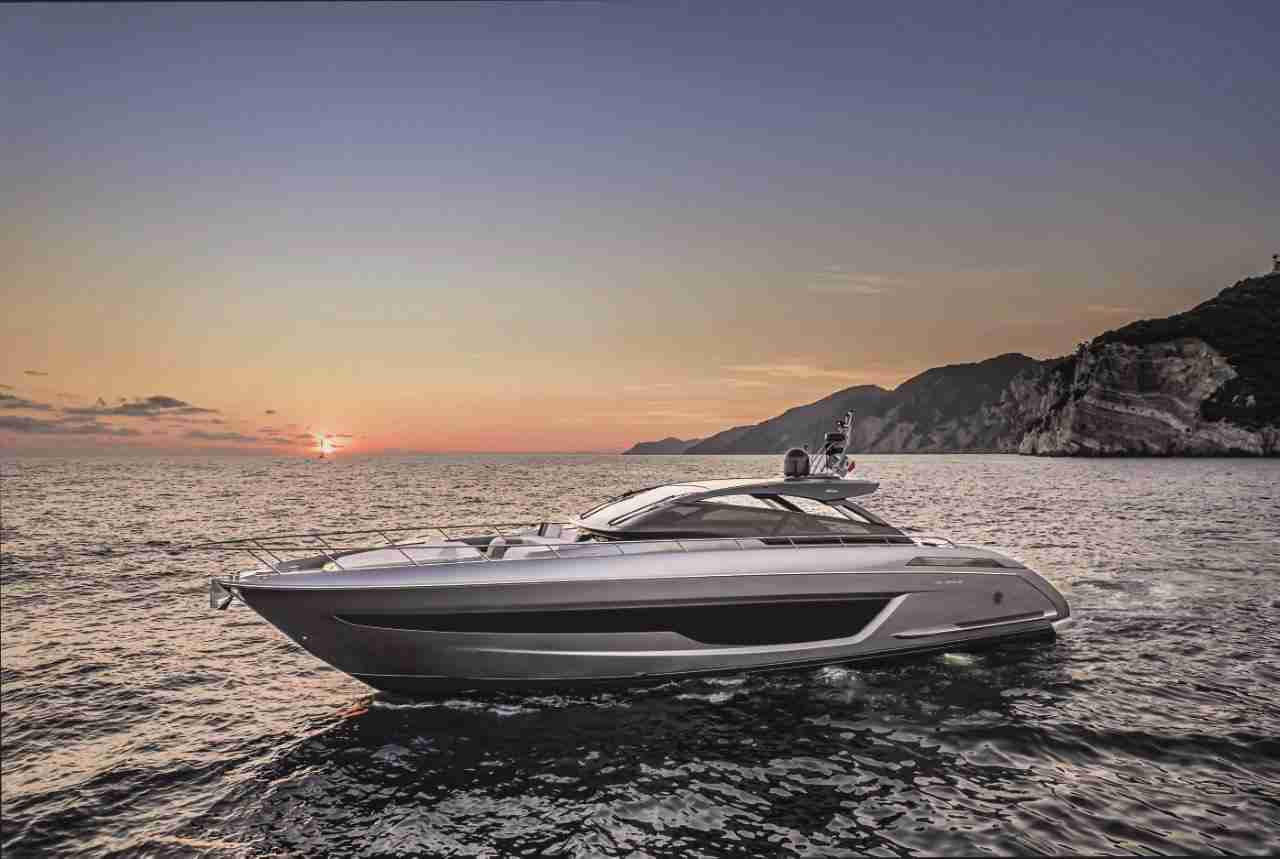 The 68′ Diable has a hard top available on request, complete with sunroof

With three ensuite cabins, a crew cabin and a range of up to 260nm, this is a charismatic day cruiser or overnighter with luxurious finishes. And with top speeds of up to 40 knots (with the optional twin MAN V12 powerful 1,650hp engines), owners and guests are guaranteed to spend less time trying to reach their destination and more time enjoying it.

The model first touched the water in northern Italy’s Lake Iseo in July, where Riva’s Sarnico shipyard has stood since 1842. This September, it debuted at Cannes Yachting Festival as one of five Ferretti Group premieres, alongside the Riva 76′ Perseo Super, and it garnered plenty of attention on the pontoons. 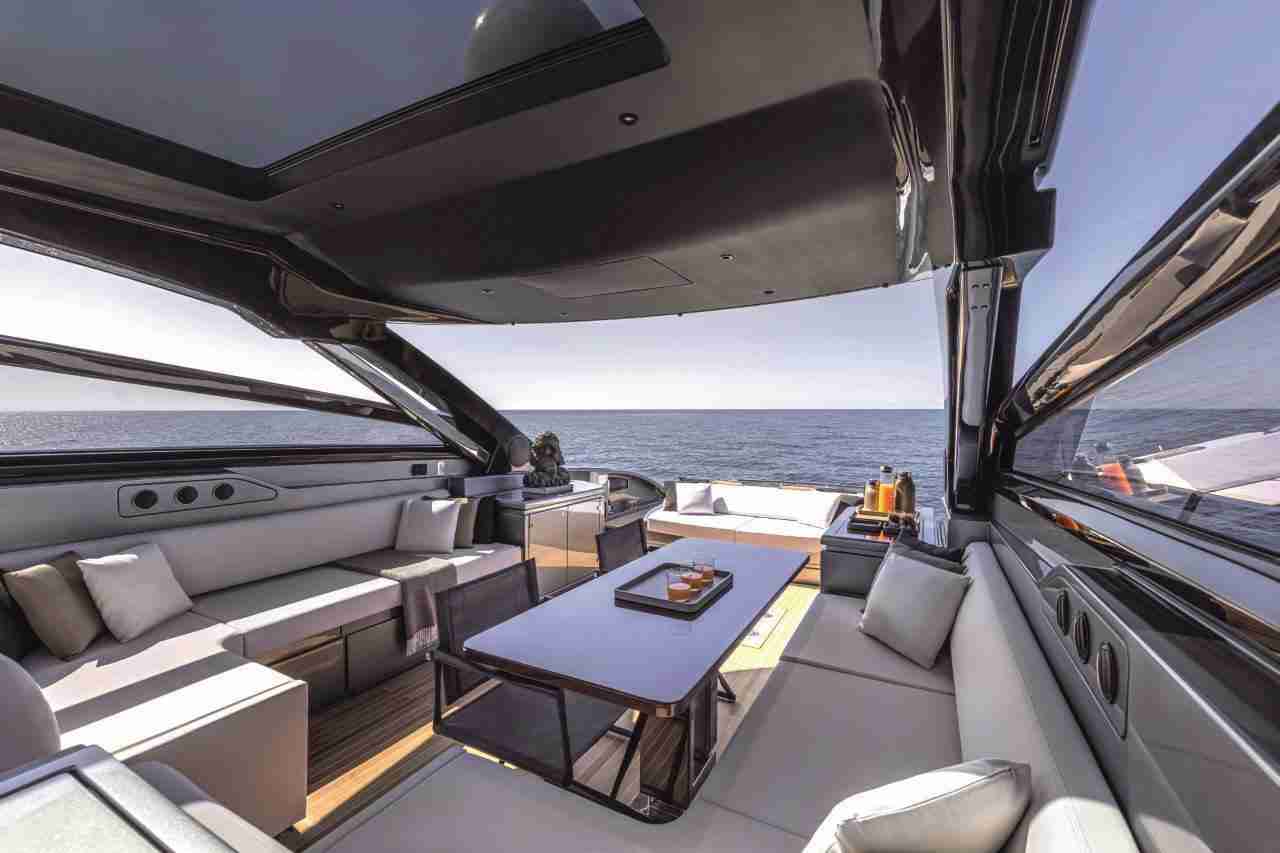 The dining space accommodates six, but can be doubled upon request

Diable means devil in French, and Riva played up to this diabolic analogy, describing the 68′ Diable as “an incredible boat that tempts and beguiles”. Alberto Galassi, CEO of Ferretti Group, called the model “an irresistible temptation” that Riva fans worldwide “can’t wait to succumb to”. He might well be right: like every Riva, there’s plenty to covet.

One of the model’s new highlights is the carbon-fibre composite hard top integrated into the curved windshield. A linear design works to keep the technical components hidden away from view and create clean lines. At the same time, air conditioning provides respite from the afternoon sunshine – an attractive proposition for owners in tropical climates. 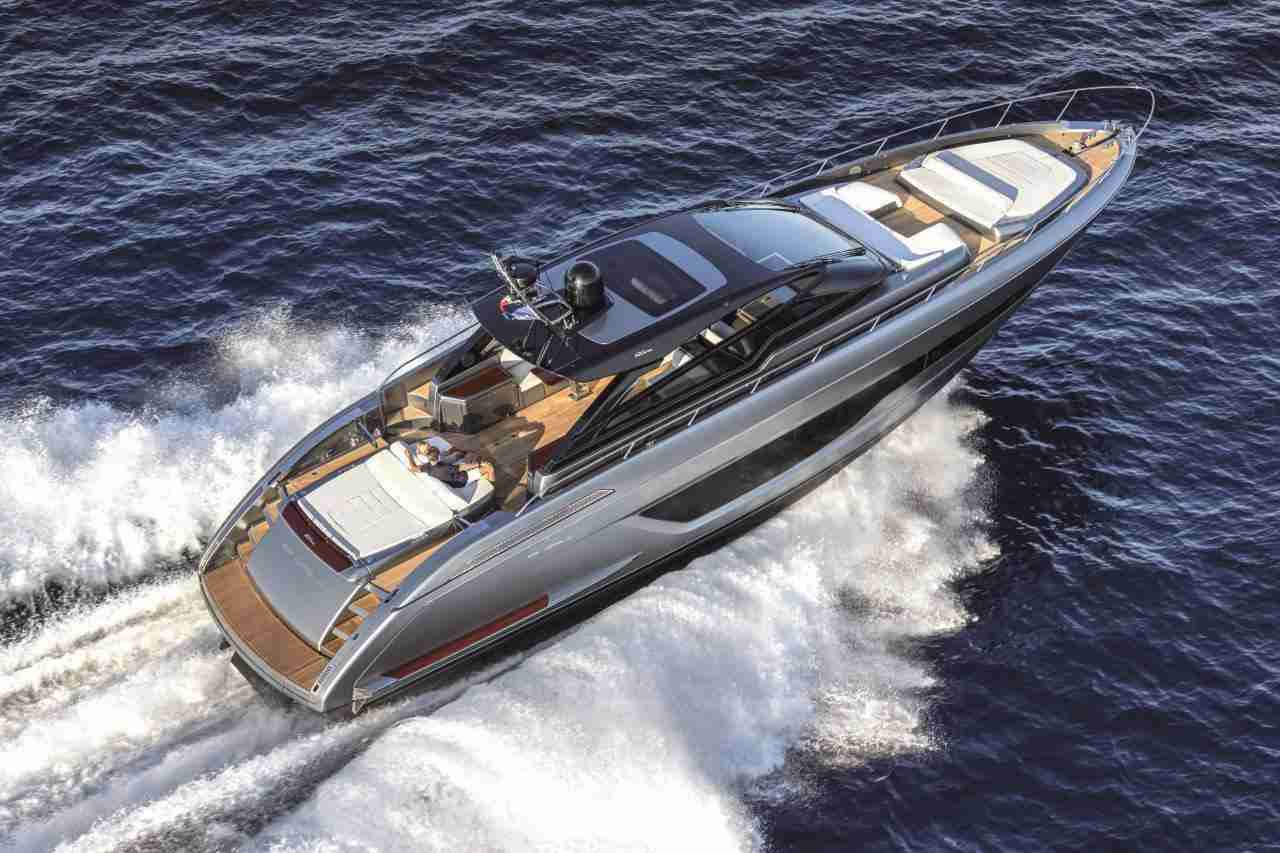 The hard top is available on request with a sunroof that can open to the sky in a selection of modes. In addition, there is a bimini system integrated into the aft section that can be extended to shelter the sofa and chaise-longue area in the cockpit. Awnings over the entire stern section further protect from the sun and elements. Under the hard top, the central area contains two facing L-shaped sofas, one of which acts as a dining space that can accommodate six, although this can be doubled upon request.

This is a charismatic day cruiser or overnighter with luxurious finishes 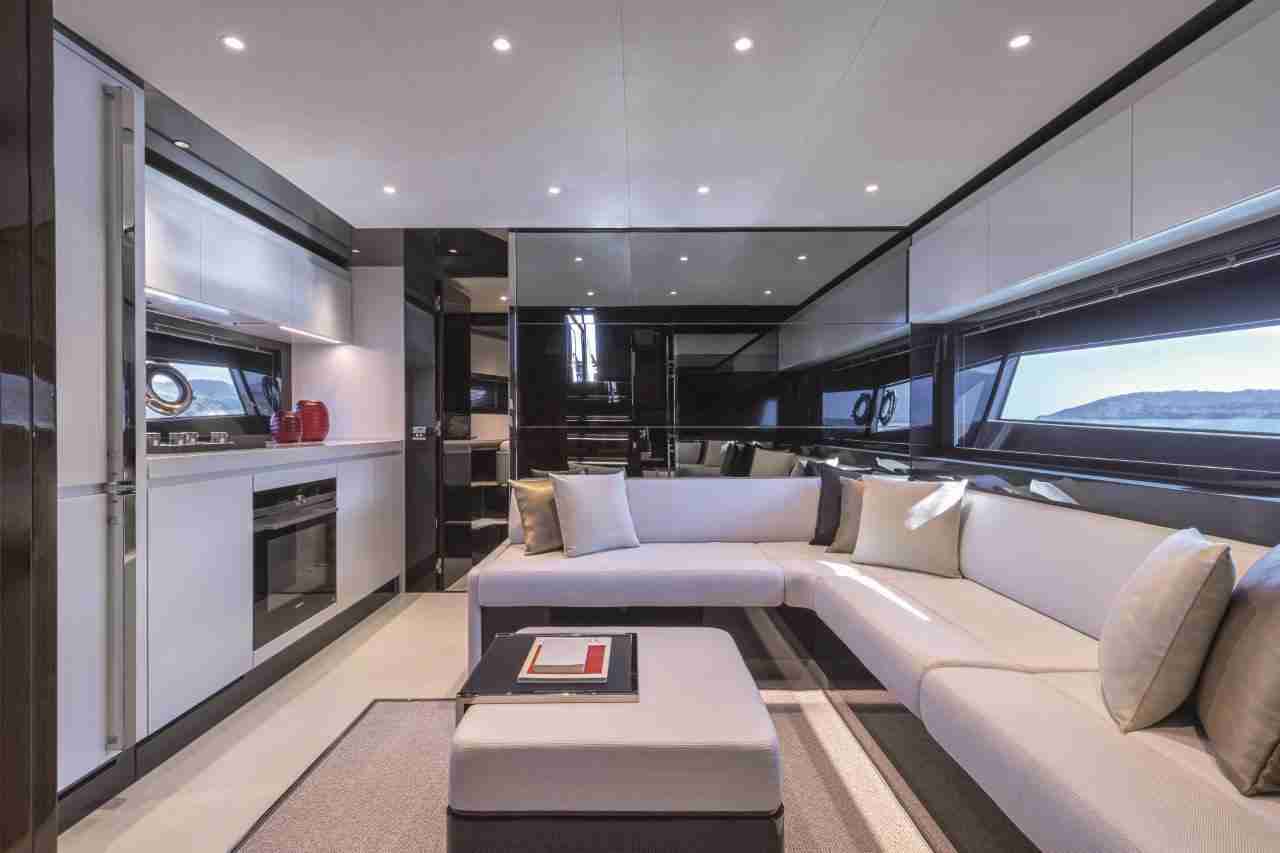 To stern, the swim platform is fully integrated into the sides of the hull, with steps that partially submerge when the platform is lowered. A garage has room for both a Williams SportJet 345 tender and a Seabob. There are two large sunpads in the cockpit – one along the water’s edge and one that takes the form of a chaise-lounge.

Another feature added to the new 68′ Diable is the oversized bow lounge, perfect for socialising and taking in panoramic views. On the lower deck, there are three ensuite cabins arranged around an open space with a dinette and galley. The VIP cabin is forward, there is one twin cabin with two single beds to port, and the master cabin is amidships. The starboard bathroom can also be used as a day head. The 68′ Diable can host up to 16 passengers at once. Meanwhile, the understairs area can also be fitted with a small laundry. 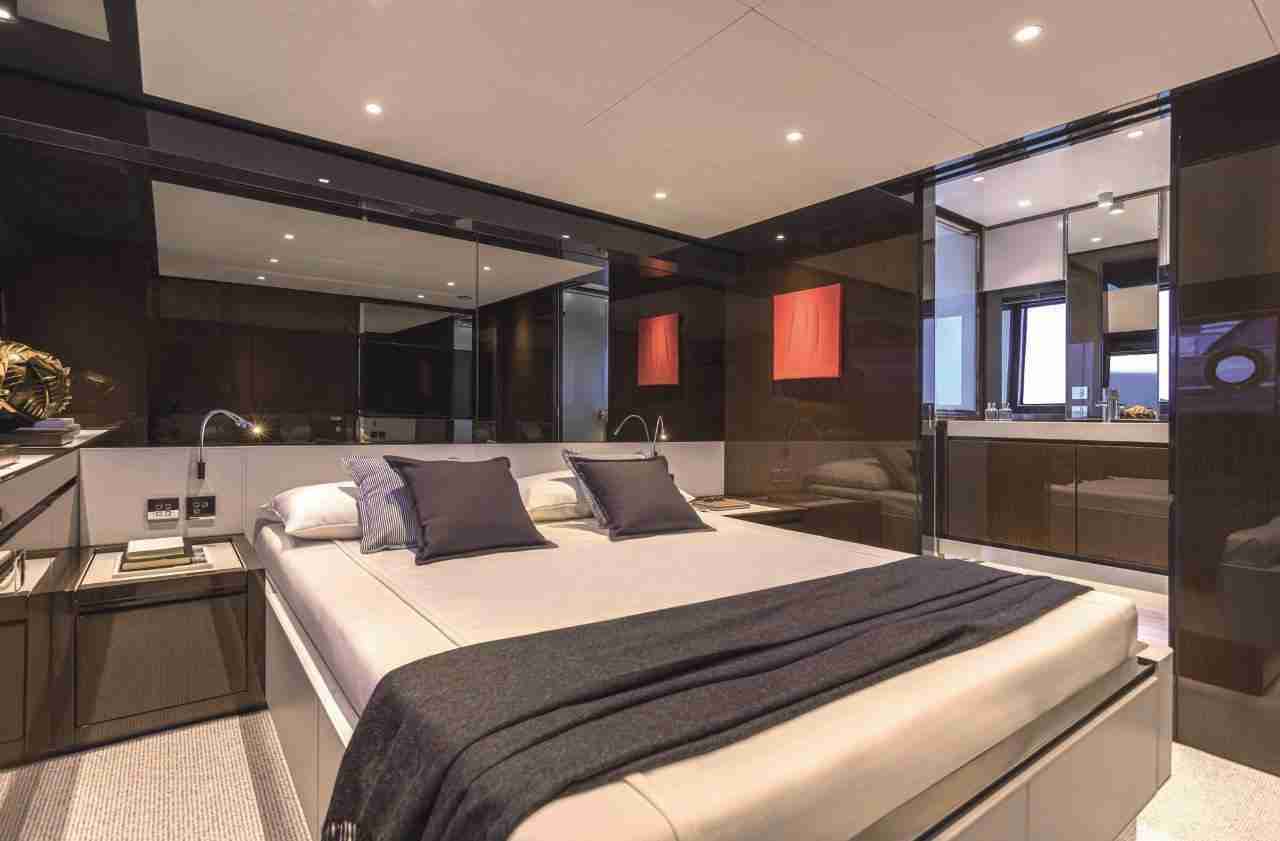 The ensuite master cabin is amidships

Premium materials can be found everywhere inside: gloss-effect chocolate coloured wood was used on the first unit, paired with leather in blue, white and grey; and steel and lacquer in both gloss and matt-effect finishes. The outer hull is finished in Riva’s “shark grey” colour with black detailing – although any shade from the Riva range is an option. 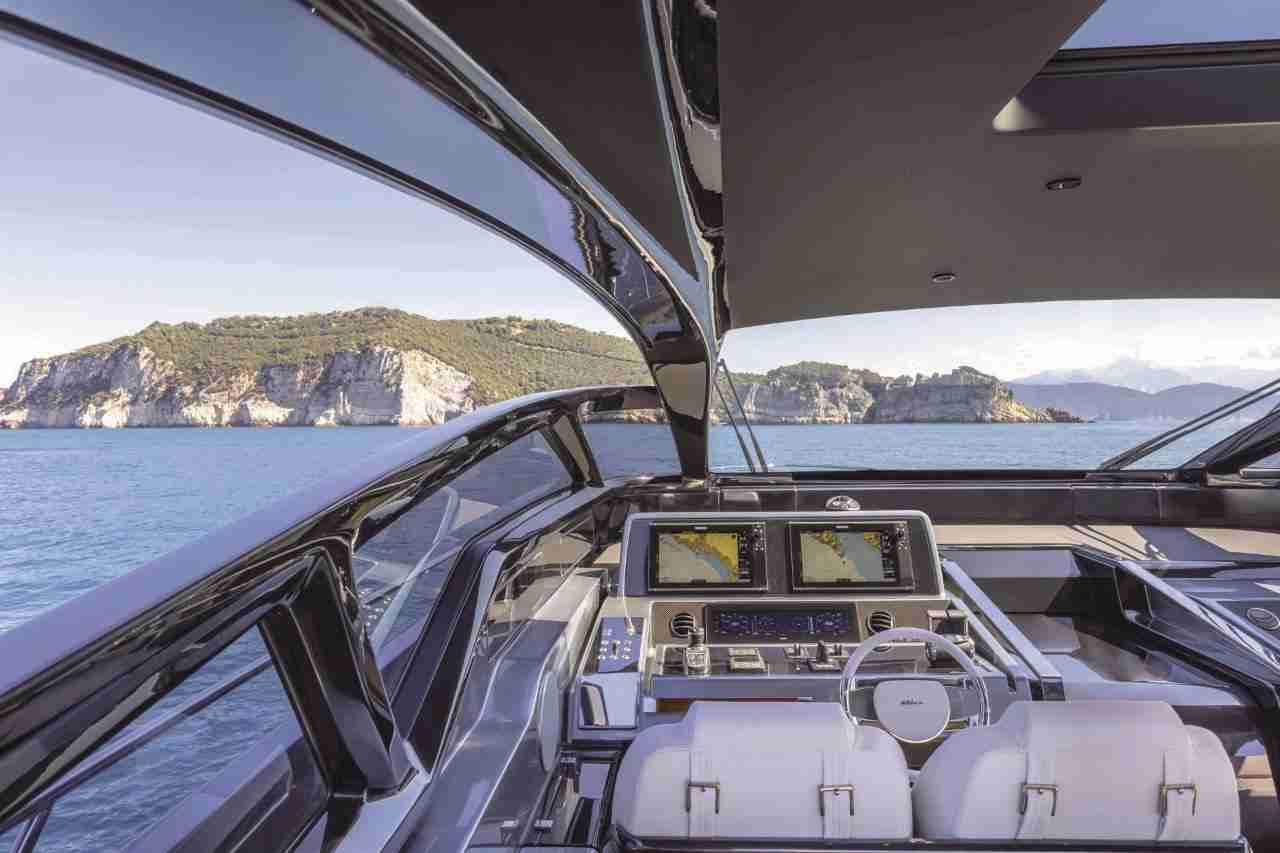 The helm station with co-pilot’s seat

An electro-hydraulic steer-by-wire system, developed with Xenta, increases the rudder manoeuvrability to improve control in all conditions, even at high speeds. There are other tricks to make mooring and refuelling a breeze, including lateral movement and a Dynamic Positioning System, which keeps the boat steady even in strong wind or currents.