The 45 Divergence is superyacht maker Ocean Alexander’s first foray into outboard motorboats. After a day spent blasting around Australia’s famed Whitsunday Islands, the Divergence showed itself as a powerful, versatile boat that works equally well as a dive support vessel or extravagant superyacht tender 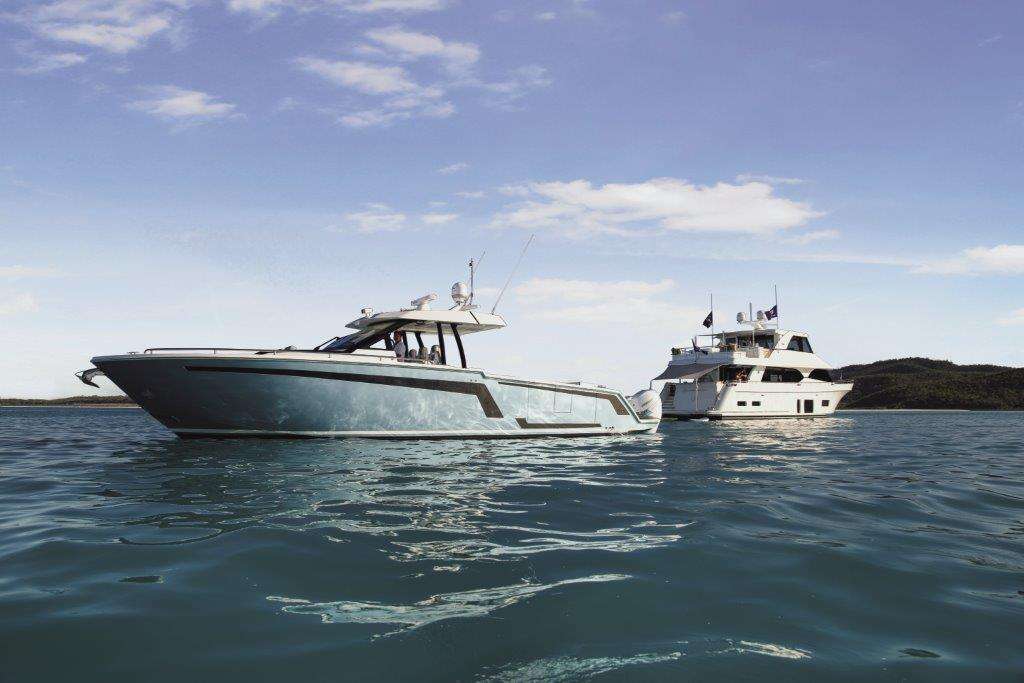 The new line of 45-foot open boats from Ocean Alexander is appropriately named Divergence. For this yacht is a definite change in direction for the Taiwanese builder, best known for its 30 to 40-metre superyachts.

It is impossible to avoid comparisons with some other American-built open boats. However, comparisons are difficult and perhaps slightly unfair because this beautiful boat, designed by Evan K. Marshall, is primarily aimed at superyacht owners who want a complementary day boat that matches the style and the substance of a much larger Ocean Alexander yacht.

The first 45 Divergence to arrive at Alexander Marine Australia from the company’s Miami yard was designated the 45d (day boat), but there is also a 45f (fishing) that comes equipped with more rod holders and extensive bait tanks. 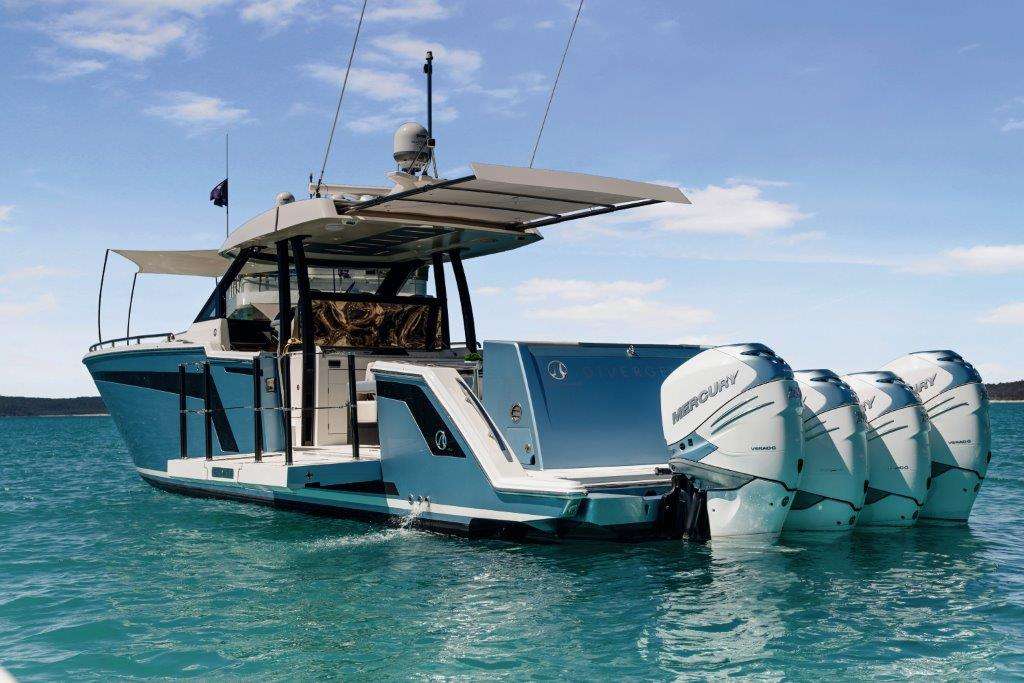 “We wanted to really show what this boat could do, so we’ve optioned it up to be a fantastic stock boat,” Todd Holzapfel at Alexander Marine Australia told me when we looked it over it at the boat’s debut in Sydney. So, there are several big-ticket items that contribute to the relatively steep A$1.9 million (HK$11.4 million) price, such as the Seakeeper 6 gyroscope stabiliser, the Mercury Joystick system and the SureShade aft cockpit awning.

Buyers of the 45 Divergence can choose from more than 400 options, making this a highly customisable boat. There are options for teak decks, plus additions such as diving accessories for a Scuba-friendly boat or added generators. 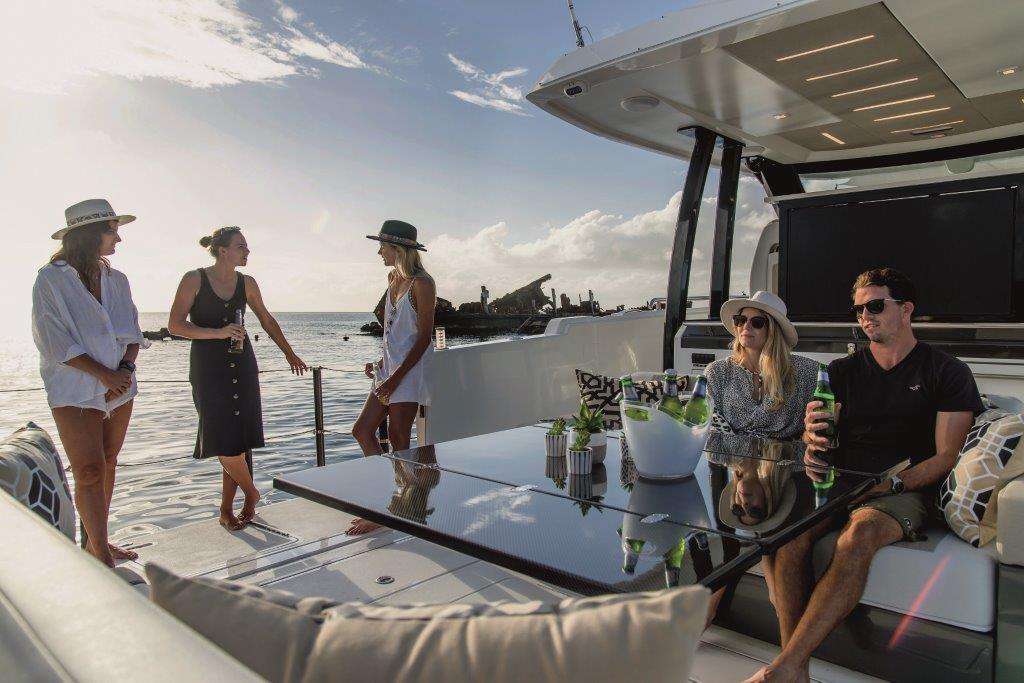 Ocean Alexander lists two main options on its 45 Divergence, a Coupe and Sport version. The Coupe comes with a much more enclosed console area on the main deck and a more expansive space below deck, while the Sport version leaves the console area more open, with the space below compressed to allow room for other priorities.

Up top, the 45 has plenty of deck space. In addition to the ample beam, it also has expanding balconies on each side, which increases the deck beam to nearly five and a half metres and nicely complements the two transom doors for easy water access.

Ocean Alexander made the decks flexible to allow for a range of possible uses. Scuba air tanks can be safely stowed upright in the transom locker, which also includes four rod holders. There was even a refrigerated lazarette on our review boat.

In addition to the ample beam, it also has expanding balconies on each side, which increases the deck beam to nearly five and a half metres 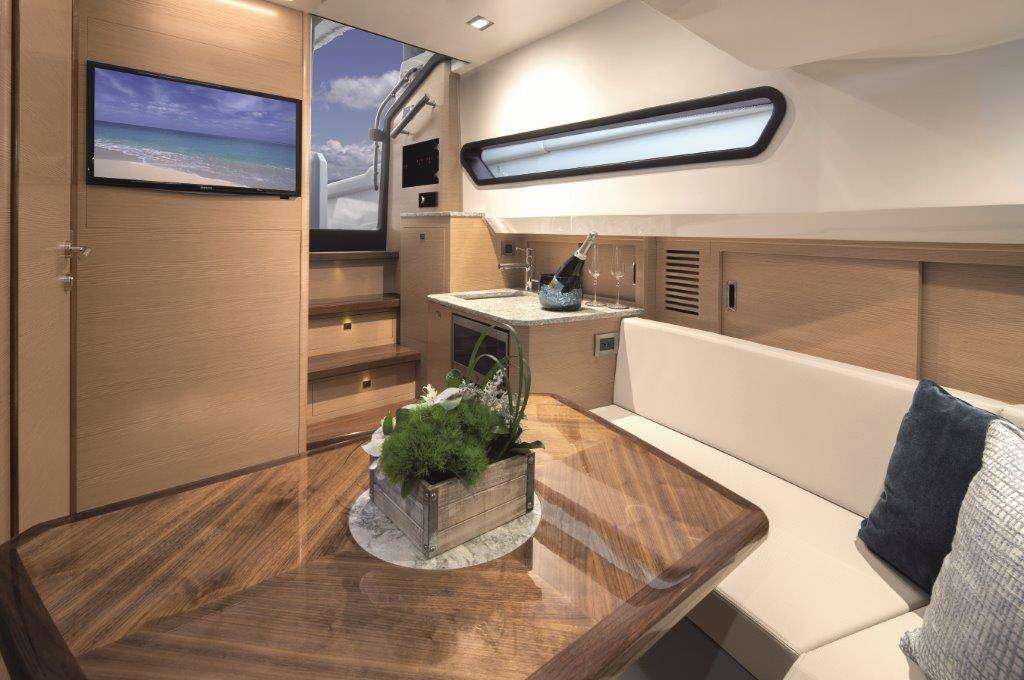 The cockpit carbon table can drop down into the sub-floor, and the transom bench can fold up to create an ideal working space for Scuba gear to be put on or removed. It can also be a dance floor, depending on your preferences. The transom shower, which runs hot or cold from the water heater, is a nice touch.

Adjoining the centre console is the wet bar and barbecue, which is protected by the hardtop. The optional SureShade stainless/canvas extension was quickly deployed at the flick of a switch on our review boat.

The console is surrounded by waist-high bulwarks and sturdy 316L stainless-steel handrails, which escort you safely to the small lounge at the bow. The thickness of the gunwales is a good indication of the sturdiness of this infused hull, which includes carbon fibre structural reinforcement and vinylester exterior resin finish to avoid osmosis.

We maintained a cruising speed of nearly 30 knots, something a lesser and perhaps lighter boat could not have done. Then we hit the throttle 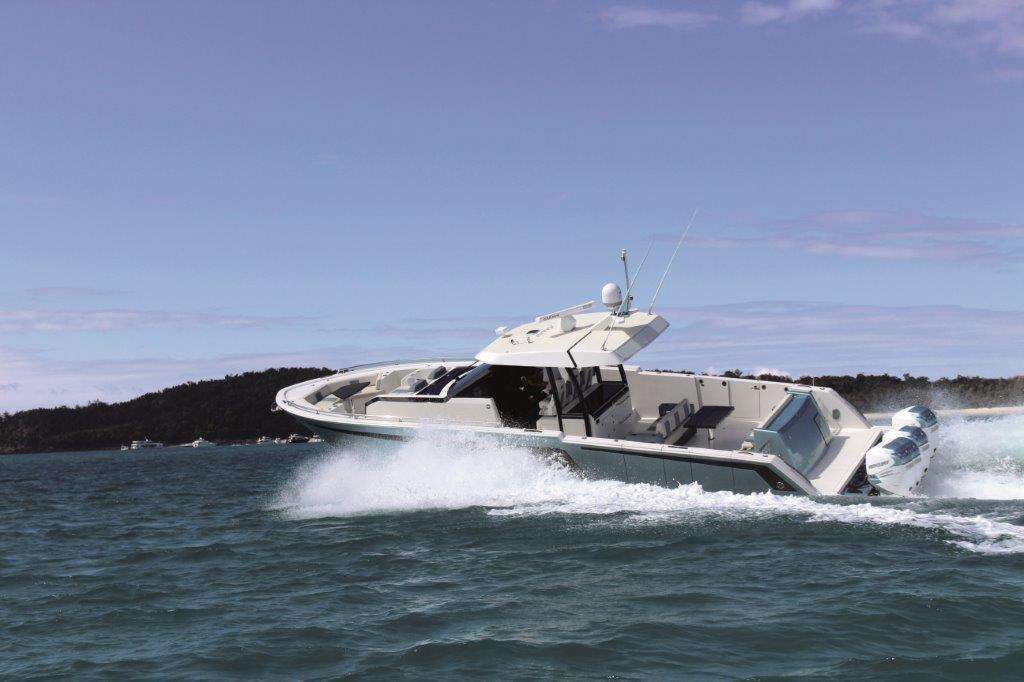 The 45 Divergence offers nimble performance for such a large yacht

The centre console layout gives access to both sides of the controls and triple helm seats with flip-up bolsters free up floor space, although not quite enough to allow crew to swap positions.

Helm information includes an extensive array of three 17-inch Garmin screens (GPSMAP 8600). Other key controls include the manual tabs and bow thruster joystick. The Maxwell windlass with handset can also be controlled from the console.

The deep hull and towering topsides allow for good headroom below deck and a convertible bed-settee that cleverly indents into the bow bulkhead to become a queen-sized bed. There is a basic galley along with a day head with six feet of headroom and a large separate shower cubicle.

Pointing our bow into four-foot swells sweeping in between Hamilton and Whitsunday Islands near the Great Barrier Reef, the boat got a sturdy test. The generous number of handholds and the protection of the centre console came into their own as we leapt of waves. The raked and flared bows minimised spray reaching us. 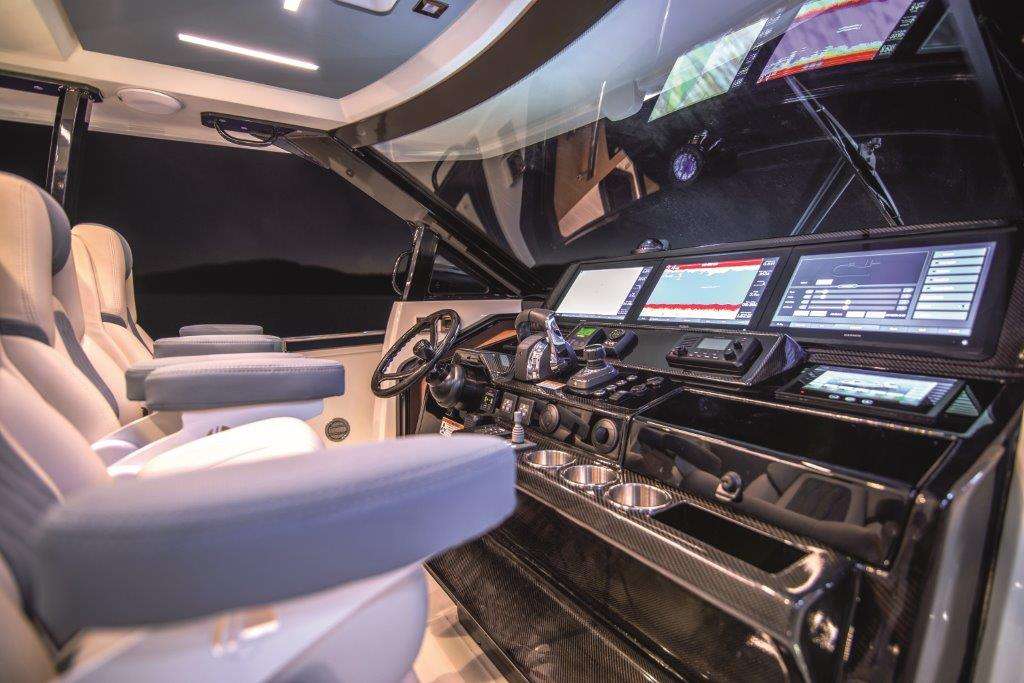 We maintained a cruising speed of nearly 30 knots, something a lesser and perhaps lighter boat could not have done. Then we hit the throttle. Despite its 15 tonnes, the 45 nimbly dug itself out of the water, as low screams reminded me of the effort of those four Verado outboard engines. I adjusted the tabs to 70% to level the bow. Reducing them further calmed the rooster tail spray as the trim further improved, and I watched the numbers settle at an impressive 41 knots top speed.

Even with the number of small craft around, the unobstructed vision all around made me feel easy. Slowing to the cruising speed of 32 knots brought fuel consumption down to 260 litres per hour, giving an approximate range of 280 nautical miles. Running close to top speed still yielded a respectable 200 nautical miles.

Handling was predictable with no trimming dramas, even when I inadvertently over-adjusted one side of the tabs. This showed the inherent stability of the hull. Finally, approaching the mothership Ocean Alexander 88, I clicked on the Mercury Joystick to guide us slowly and in total control.

This boat is much more than a superyacht accessory – it is a versatile powerboat that offers a hair-raising ride with the options to make it truly your own divergence.