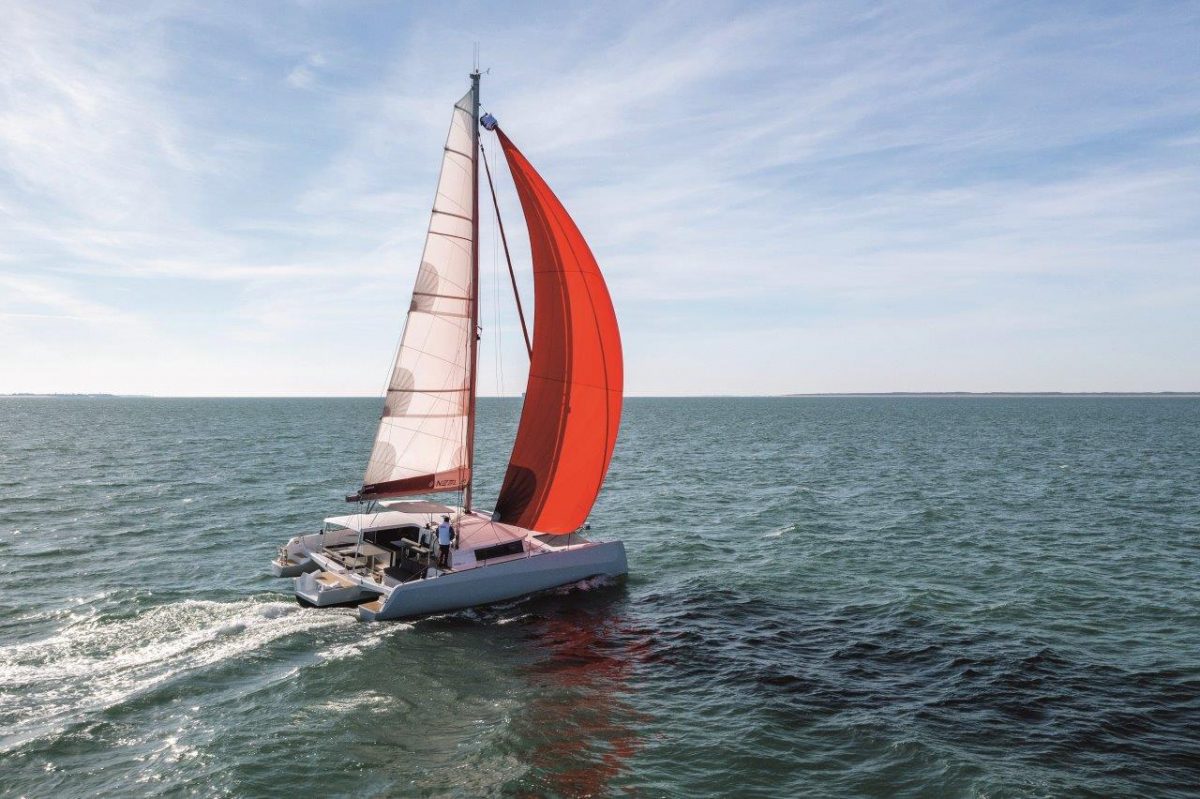 Trimarans rule the oceans when it comes to offshore records, but in the cruising world, they are much less distinguished. Three-hulled boats of the past were often epitomised by older, more eccentric designs that perhaps attracted the more unconventional sailor. This image is one that Eric Bruneel has been steadily changing in the yard he established in 2010. The La Rochelle facility on the southwestern French coast builds the Neel 47, 51, 65 and now the new 43 that recently arrived in Australia.

For those considering a trimaran, there are pros and cons. The Neel 43 shares traits with her record-breaking brethren, such as minimising the wetted surface while the amas (two side hulls) add stability without too much drag. Eighty per cent of the weight is in the central hull while its skeg-keel aids windward ability, and the single large rudder even feels like you’re steering a monohull. Berthing is a downside – it is expensive due to overall hull size, and it can be an unwieldy process. 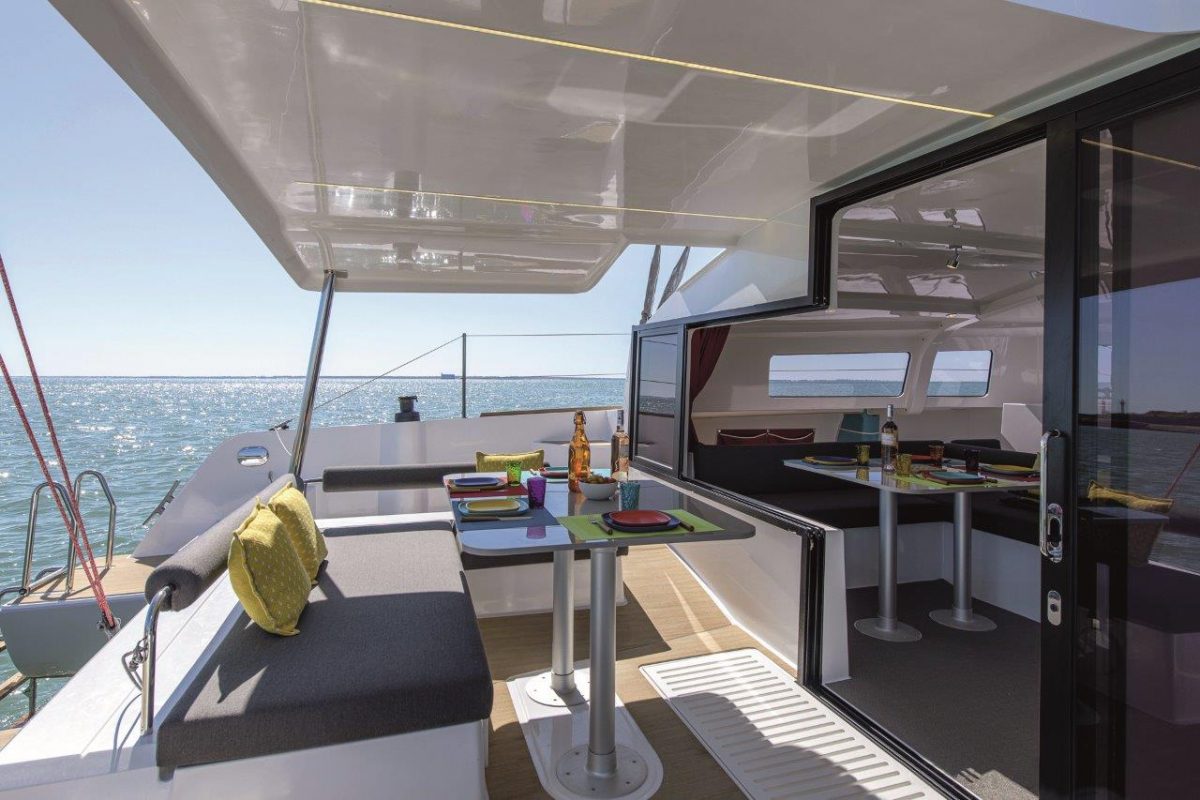 At first glance, the boat looks like more of the same idea as the 47 model. However, stepping aboard via the wide ama steps and then into the cockpit on the Neel 43 reveals a slightly different layout – a wide, open-plan approach created by designer Marc Lombard. Those wanting catamaran-style openness in the cockpit may be disappointed. However, seaworthiness is better, mainly because there’s support for hands and bodies. There’s a spacious L-shaped dining area and even a double bench facing aft, yet without the acres of open space that can prove hazardous offshore. 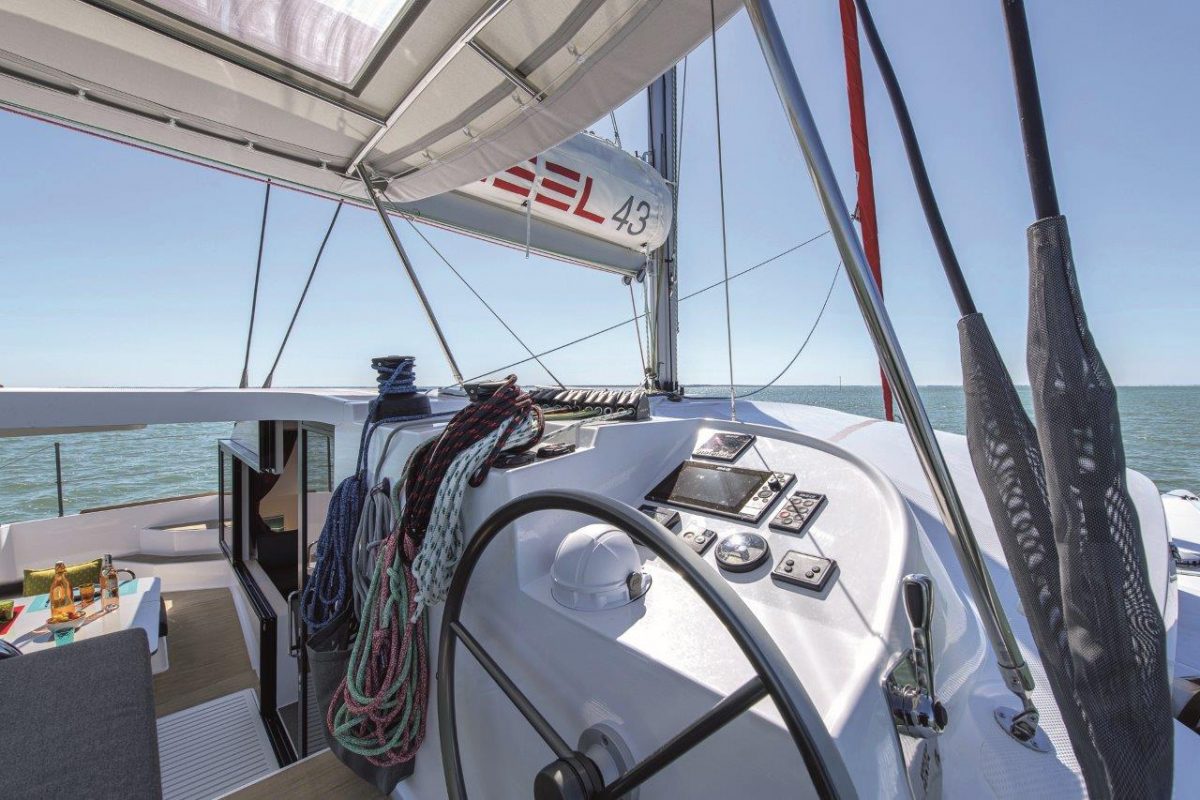 The cockpit integrates well with the saloon, this space, which Bruneel dubs the “cockloon”, is fully shaded by a hardtop bimini and can seat 10 guests around its inside-outside tables. Double sliding doors seal it off from the saloon, and deep scuppers shed any water. There are a few blemishes here – the sharp edges of the doorway bulkhead and the low edge of the bimini caught my head, so I’d rubber-clad them.

There’s a transom-based wet bar and grill, ideal for keeping the fumes out of the boat. For the dinghy, a clever idea of using the boom with a topping lift and electric winch as a davit sets the dinghy safely across the hull. Adjoining the cockpit, three steps up, is the single helm station on starboard, which can also be accessed from the deck. 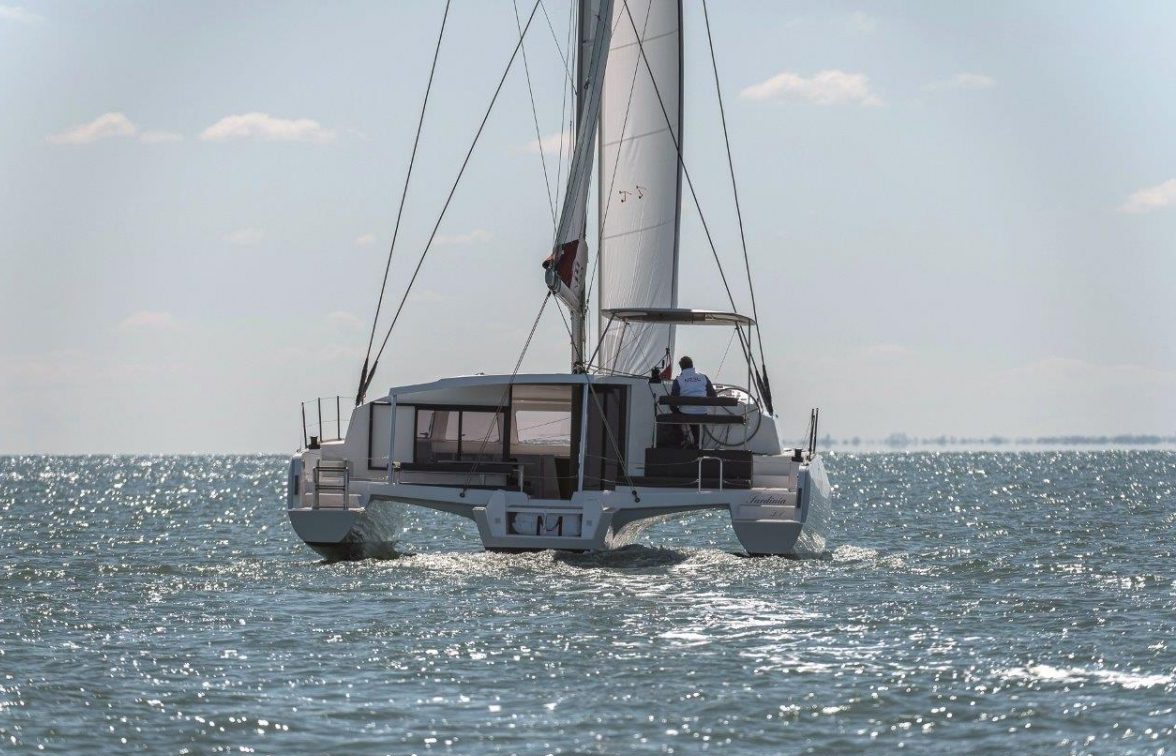 Trimarans can cruise the water at blazing speeds

Three double berths are in view as I step inside the saloon. Off to port behind a low bulkhead is a three-quarter double bed with curtain for privacy; forward in the hull is another and to starboard; behind Perspex is the main double bunk. Adjoining its bulkhead is the longitudinal galley with the washroom and shower beside the outside doors – ideally placed for cockpit guests.

Storage is a quirky affair, but this layout creates usable space, with an L-shaped dinette handily placed opposite the galley. The galley is highly functional, fully equipped with a gas hob and oven, double sinks, refrigerator and overhead cupboards. 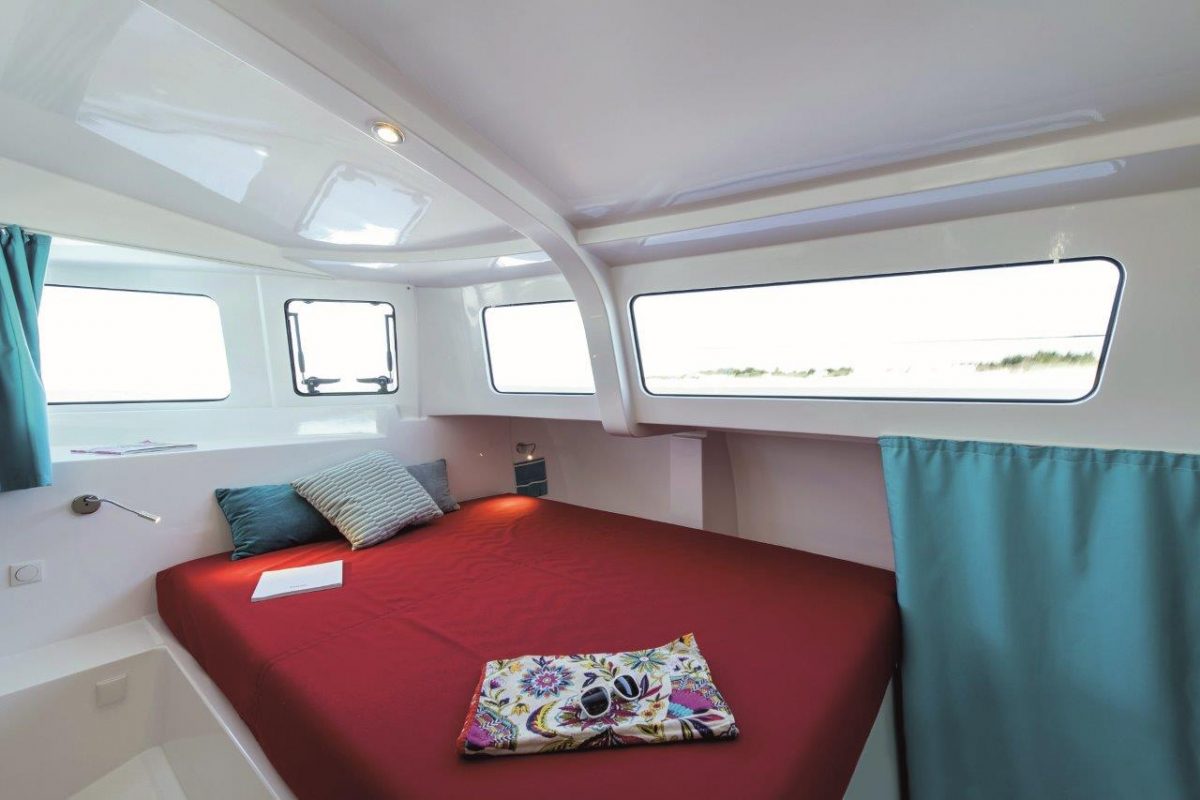 The Neel 43 has an extensive sail plan, so it’s ideal for the varied conditions often found while bluewater voyaging. Our review boat came with upgraded tall carbon spars and Dyform wire shrouds, which are pricey but enhance light air performance and reduce weight aloft. This also allowed three reefs in the fully battened Incidence Dacron mainsail.

A large foretriangle allows for a large genoa, and there’s good separation on the fibreglass bowsprit for the asymmetric spinnaker sail, which is deployed via a sock. 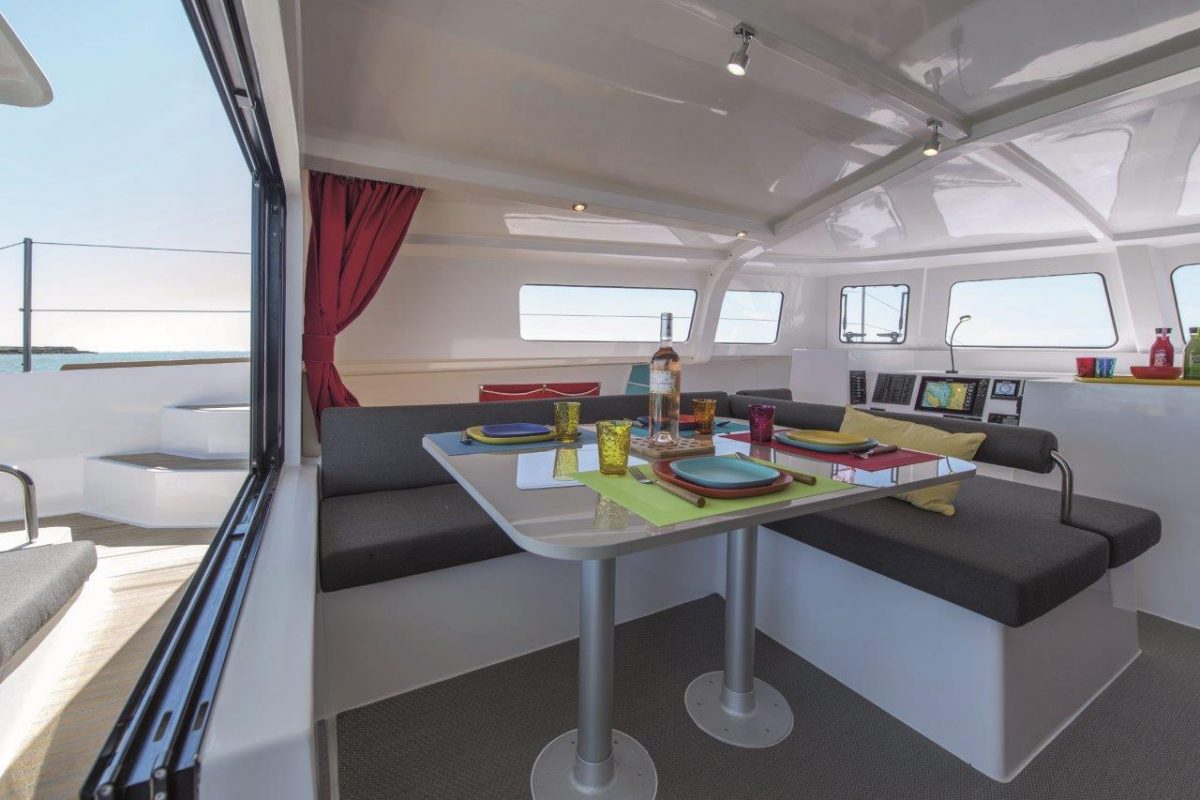 The airy ‘cockloon’ is perfect for an aperitif

The single starboard helm station gives vision across the hulls and is protected by a canvas bimini. Behind the large steering wheel (800mm) is a stainless-steel-framed double seat that provides support and handholds – a good idea for an elevated steering position.

The console controls included a Maxpower bow thruster, B&G electronics with autopilot at hand and throttle outboard for the 50-horsepower sail-drive engine – which has a folding propeller. Sail controls are well laid out with short and straight runs of all lines from the mast base directly to a wide bank of jammers and two winches. The three hulls are moulded in one process, which increases structural rigidity, and the skeg is solid GRP with a depth that protects the sail-drive leg. The deep hull easily holds the single engine aft. 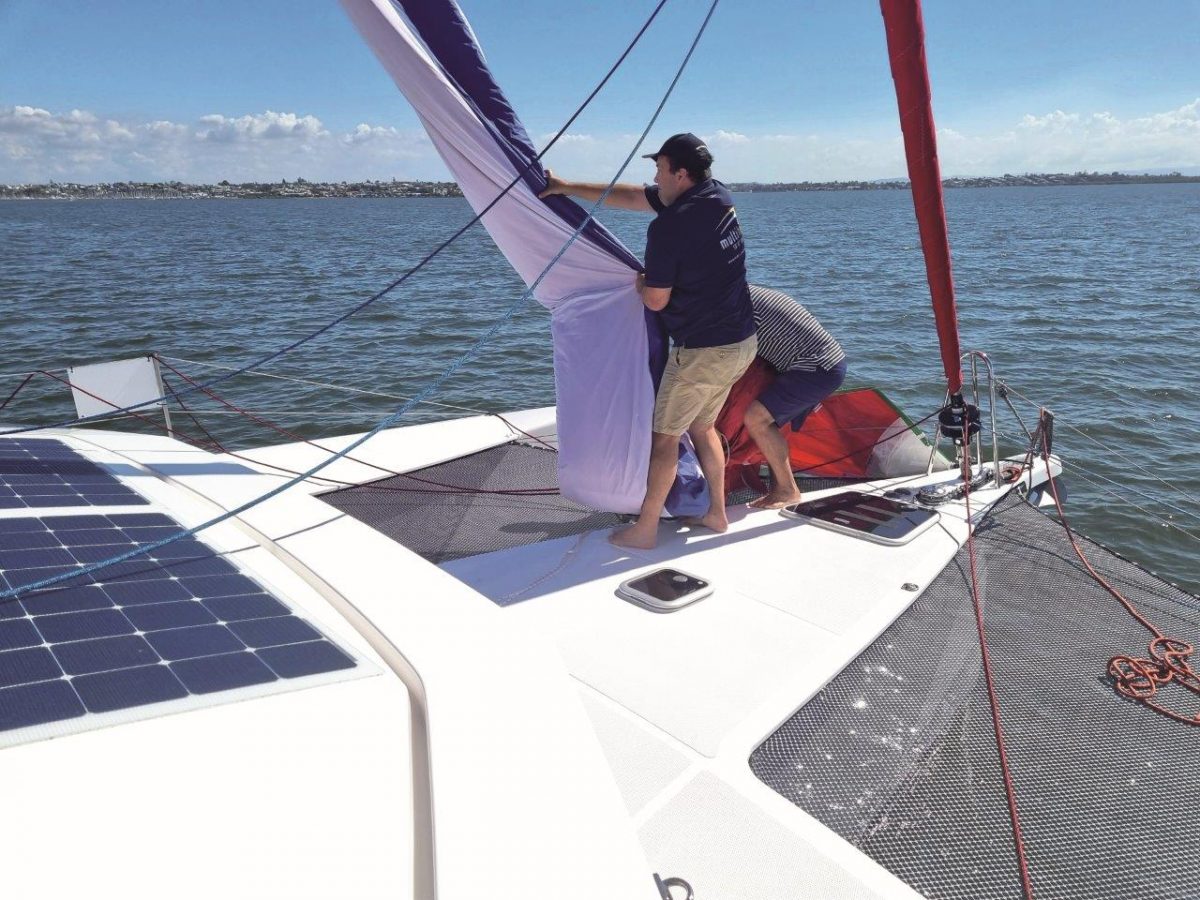 The Neel 43 has been dubbed a ‘sailor’s boat’

At sea, as I steered the Neel 43 windward, the sensation from the large steering wheel encouraged me to enjoy the moment. As the ama (outside float) rose steadily to perhaps 10 degrees, reducing the drag area, we glided windward at nearly 45 degrees at a speedy 5.8 knots despite a fickle 10-knot breeze. Tacking through 100 degrees was also a speedy affair, with only the genoa sheets to trim. This kind of light-air performance will sell this boat to many tropical sailors. Sailing windward also had its rewards, of course: the run home. We hoisted the asymmetric sail in its sock before I ran off at about 70 degrees to put the low-lying coast of Brisbane on our triple bows.

At this true wind angle, we sped up to seven knots while not even spilling a glass of water that sat beside the helm. Gybing was equally well done. In my notes on this sea trial, I wrote the phrase “sailor’s boat”: and never a truer word could be said about this Neel 43.

Australian distributor: www.multihullsolutions.com.au; other distributors can be found at neel-trimarans.com

The new Sanlorenzo SD90 offers buyers an interior that’s fitted with recycled material and an appreciation...