Designed to replace the popular L48, the Leopard L50 is a new cruising sailing cat that raises the bar for year-round luxury and comfort 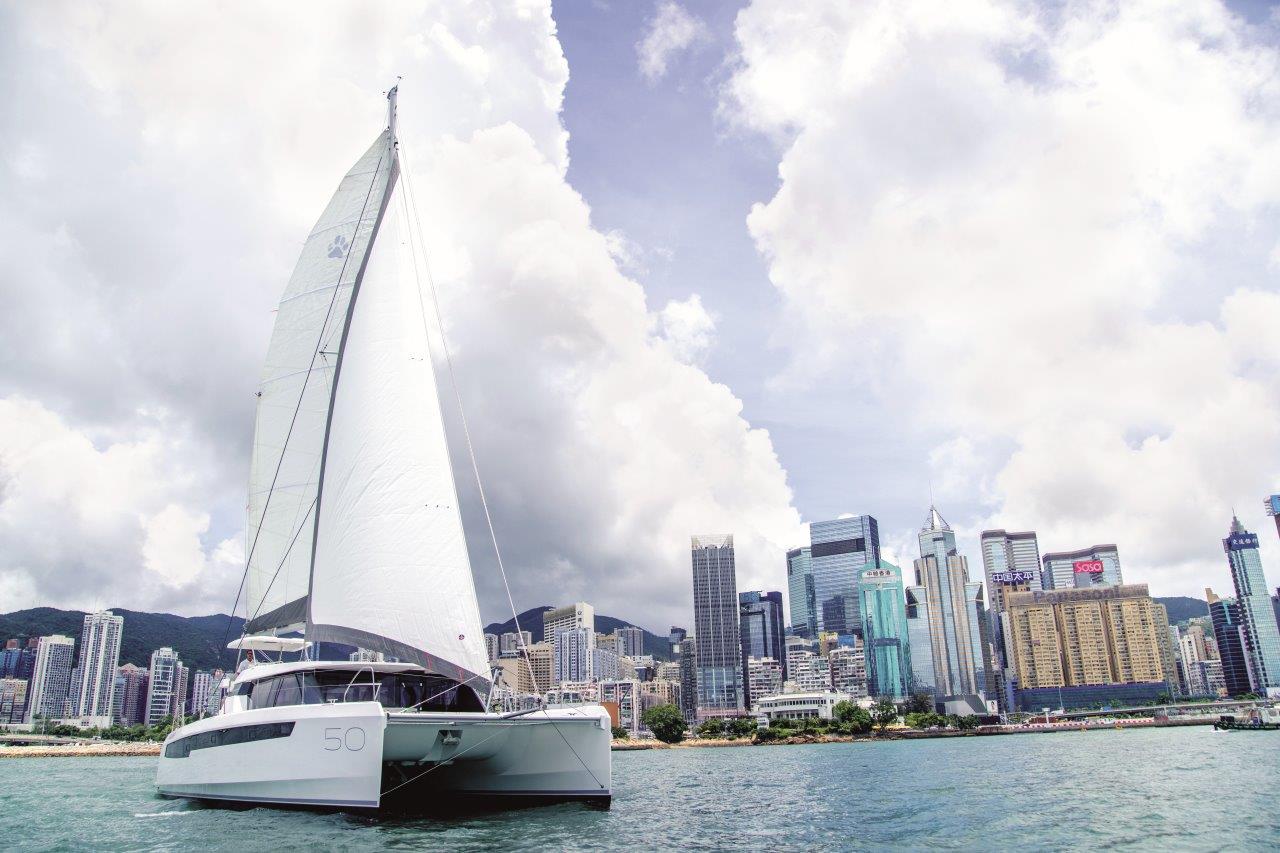 Hong Kong was lucky enough to enjoy the chance to see Asia’s second ever Leopard 50 – assembled and readied for delivery by the legendary Sun Hing Shipyard – when it arrived in late April.

Vivian Chan who manages the shipyard is also the founder and director of dealership VP Yachts, the latter becoming the Hong Kong dealer for Italian shipyard Sessa Marine through working with Sessa’s mainland China dealer, Omnia Marine in Shenzhen, also the Leopard dealer in China.

Omnia asked for Chan’s assistance in receiving, assembling and commissioning the Leopard 50, readying it for onward delivery to its owner in Hainan, China. 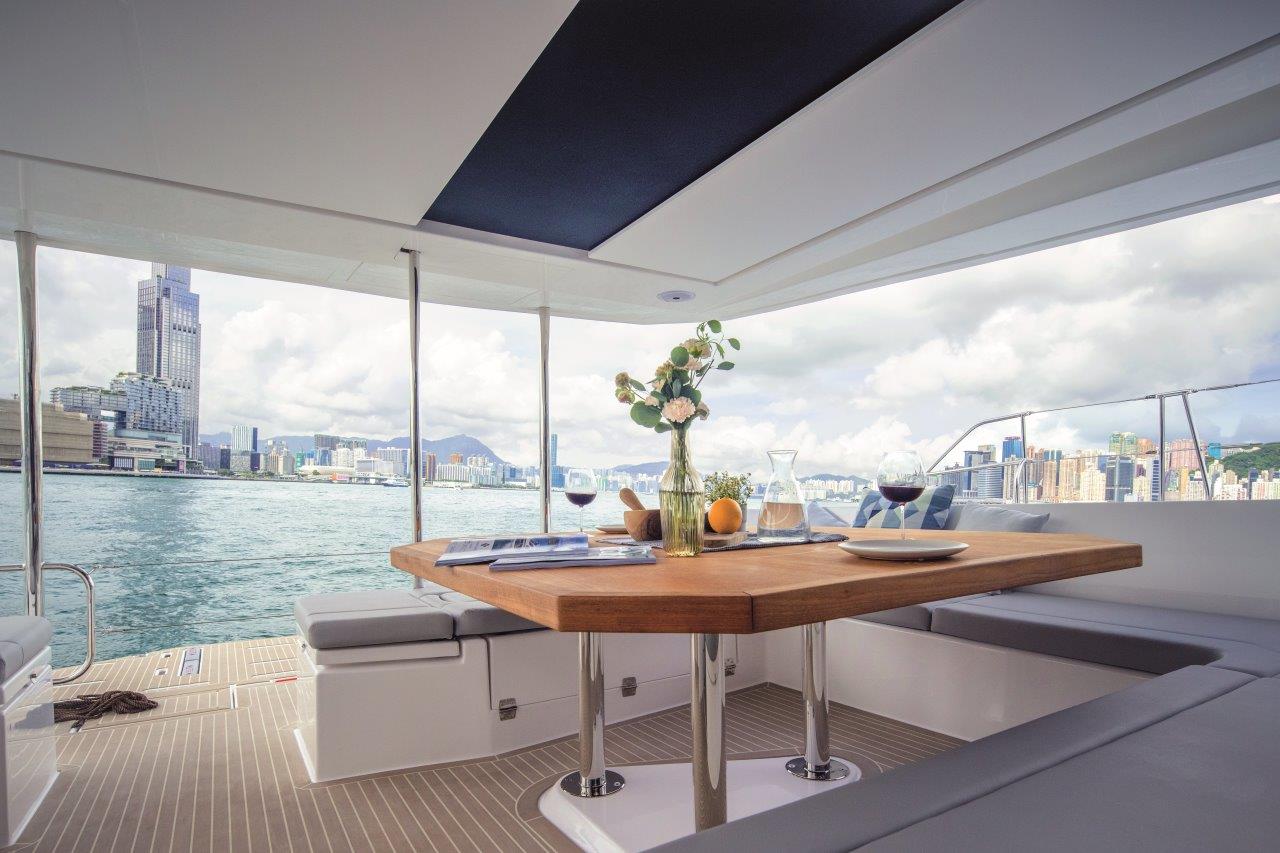 The cockpit is perfect for an outdoor meal with a view

Leopard Catamarans, headquartered in Florida, USA, with shipyards in South Africa, is the second-largest production catamaran builder in the world and the leading power-catamaran builder globally. The firm is also part of the same company that owns The Moorings and Sunsail, the world’s largest charter company.

Thailand-based Kit Chotithamaporn, the Asia regional manager for Leopard Catamarans, says that the L50 is the second hull delivery of this model in Asia, with a third hull being shipped at the time of speaking to Asia-Pacific Boating in June.

“The first Leopard 50 was delivered to Phuket for a Singaporean owner – with its owner currently living on board and cruising Fiji, and another Singapore-based Leopard 45 joined him in Fiji as well,” he adds.

“People say it feels more like a 60-footer, and it’s as wide as some 100-foot-plus motoryachts” – Vivian Chan, VP Yachts

An additional Asia delivery was also scheduled to arrive by July for a Japan-based owner, who had arranged to fly into Cape Town and sail her from there. Chotithamaporn adds that Leopard sailing cats are particularly popular in China, Korea and Japan. And while the Philippines used to see demand mainly for sailing Leopard catamarans, lately that has shifted in favour of Leopard powercats. 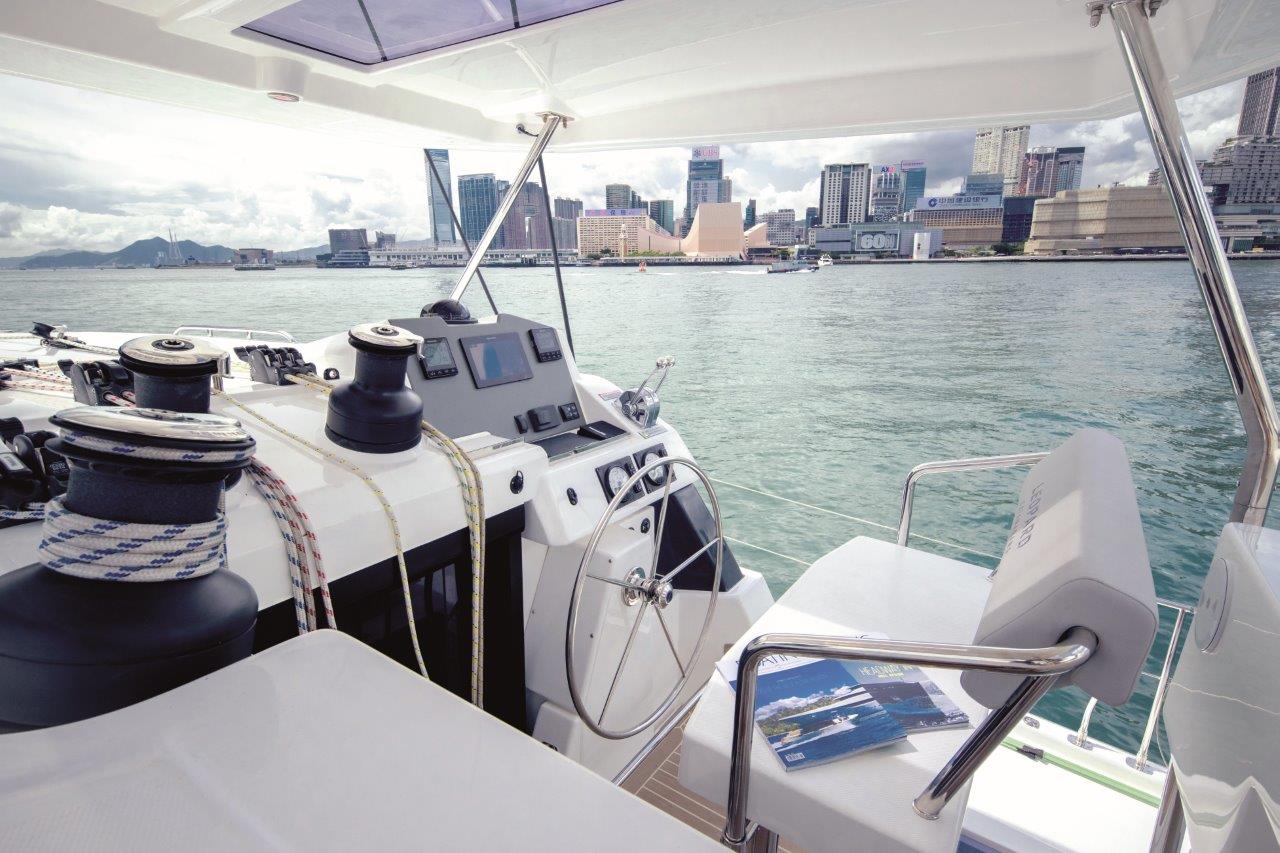 The Leopard’s comfortable helm station is ideal for cruising

Hong Kong’s new Leopard 50 arrived in April. After commissioning it, Chan could show it to local brokers at an industry party in May.

“At that party and some other chances I had, I was able to show the Leopard 50 to people in the yachting industry and boat owners in Hong Kong, who may not have been familiar with the brand or this particular model,” she says. “I’ve had a lot of positive feedback on the quality of it, and especially about the space it offers – people say it feels more like a 60-footer, and it’s as wide as some 100-foot-plus motoryachts.

She adds: “The owner in Sanya cannot wait for it to arrive.”

The Leopard 50 was designed with a mission to replace one of the most popular Leopard catamarans: the award-winning Leopard 48. In collaboration with the design team at Robertson and Caine and the well-reputed South African naval architect and designer Simonis Voogd Design, Leopard Catamarans set about to raise its own bar even higher for a cruising sailing catamaran. 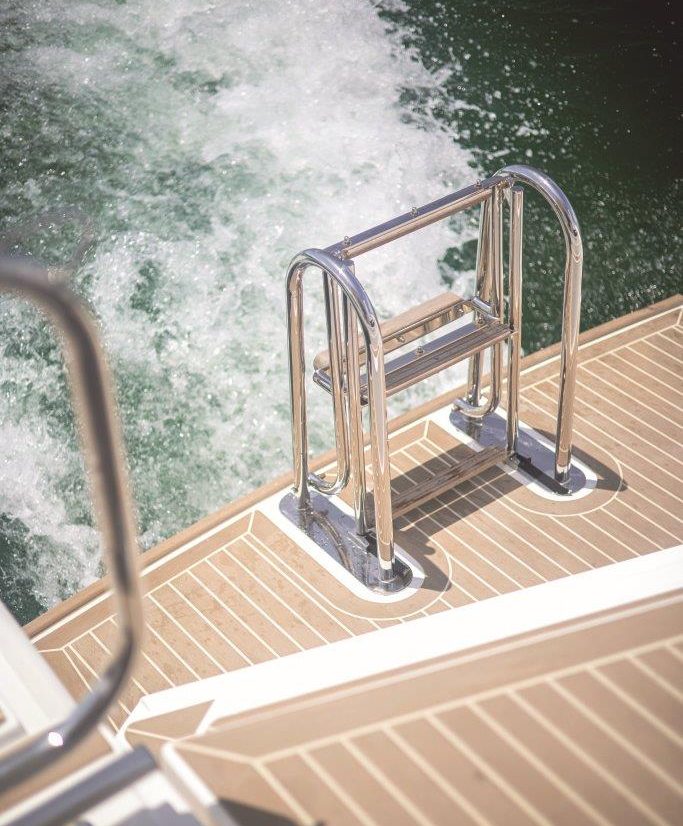 A stepladder on the swim platform

Variations offered are for the classic hardtop exterior configuration (Leopard 50P) or, for the first time on a Leopard catamaran of this size, an optional flybridge (Leopard 50L). This additional outdoor upper deck features a lounge area, table, sunbed, and optional exterior speakers and shade awning.

Access is via floating stairs leading up from the aft cockpit. While under sail, passengers can move about the flybridge with ample headroom and no concern about the movement of the boom. The flybridge is configured to allow an easy flow of contact with the raised helm station to starboard – a signature feature found on all Leopard catamarans.

The Leopard 50P, with its continuous hardtop (and without flybridge), can deliver increased performance, particularly when fitted with a square-top mainsail and other optional performance-orientated rigging and sail packages.

The entire exterior styling in both versions of the Leopard 50 has been revamped for a more sophisticated look. While the exterior dynamic performance of the yacht has also been enhanced, naval architect of Simonis Voogd, Alexander Simonis, says that “most of the work has been done “under the bonnet”. 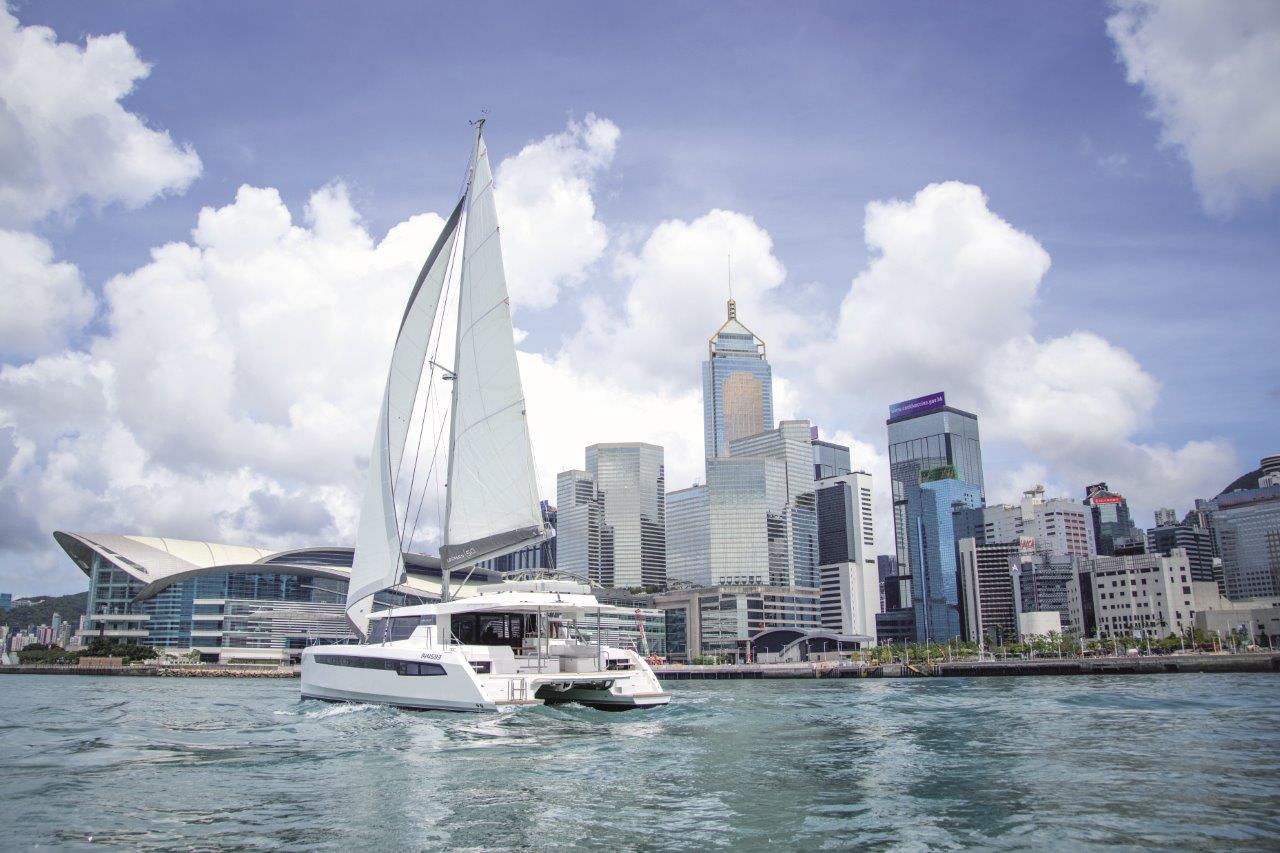 The Leopard on an urban cruising excursion around Hong Kong

“To create the beautiful open-plan layouts and the nearly 360-degree view from the saloon area, while at the same time have a strong and stiff yacht which is not too heavy, requires advanced engineering solutions,” he continues.

“The new 50 makes use of carbon-infused ring frames in the most critical areas to achieve this. This type of construction has been pioneered on the larger all-carbon-fibre racing catamarans and is now successfully being applied in this Leopard cruising catamaran so that we can offer the best possible mix between comfort, space and performance,” Simonis says. 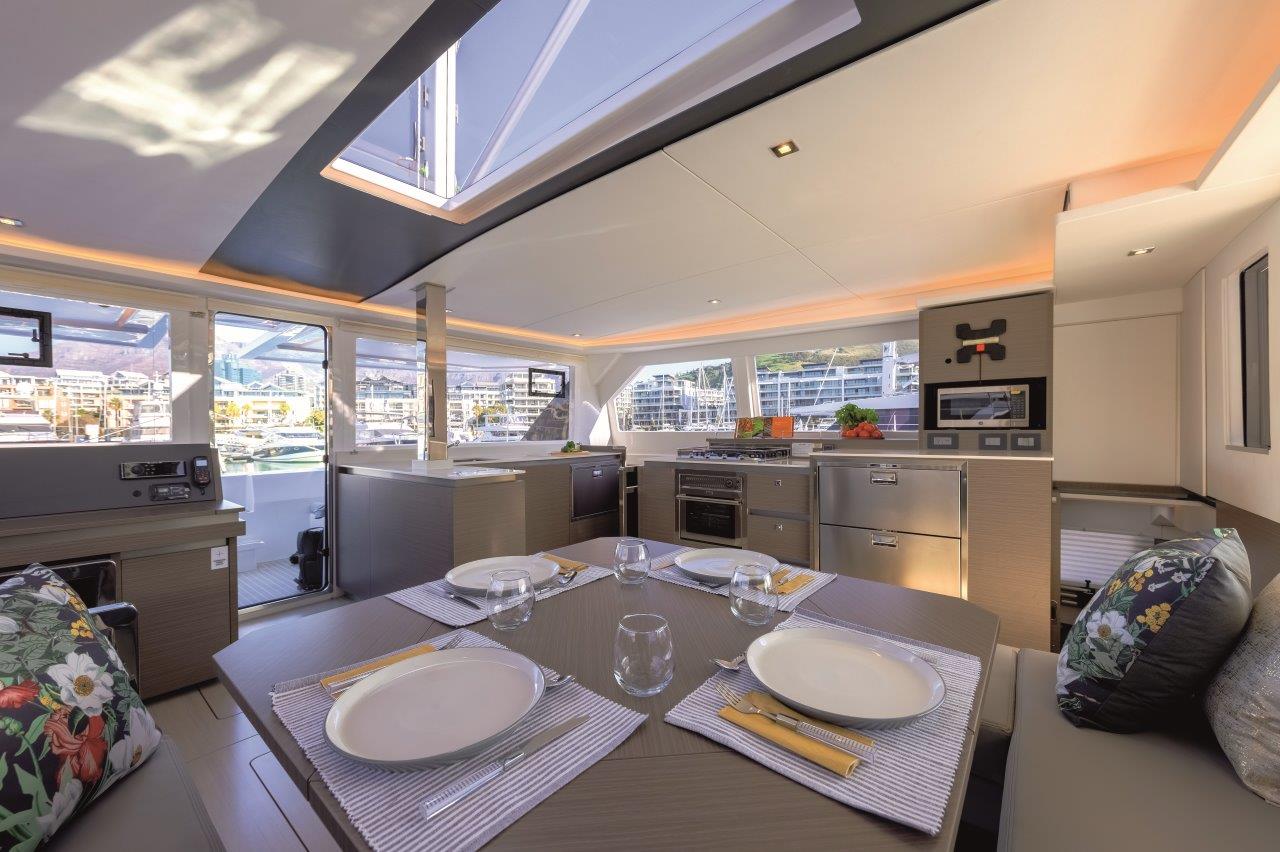 Guests can move easily from the helm station to the spacious aft cockpit, and from there, step into an open saloon through sliding glass doors that seamlessly blend the saloon with the outdoors. Inside, the interior has an elegant, light finish accented with grey contrasts. The design is modern and fresh, focusing on the quality of finish and materials. The stylish interior is designed with plenty of headroom and an ergonomic layout.

All newish Leopard interior configurations have an L-shaped forward-facing settee, situated aft, allowing direct communication with the forward-facing galley. The saloon has an inset large-scale overhead skylight, and the forward cockpit is accessible from the saloon through a weather-tight door.

The interior offers multiple layout configurations with provision for three, four or five roomy, bright cabins and an extensive options list. Above all, the Leopard 50 emphasises functional open spaces and ease of handling.

Coming later to Hong Kong will be an L46 power cat that Chan will likely be commissioning for Omnia Marine.