The Lagoon Sixty 7 power catamaran, a showcase of sleek, spacious and highly functional design, makes its debut in Asia

In Hong Kong for a brief sojourn on the way to her owner in Taiwan, hull number three of French shipyard Lagoon’s Sixty 7 power catamaran – making its premiere appearance in Asia – was an airy-decked sight to behold in late September.

At just over 20m in length and with a beam of 10m, it’s no compact power-cat, and the open decking at the stern, flybridge and particularly at the bow offers noticeably ample outside space. Minimalist lines throughout are deliberately kept at a low eye level to bring the fullest ocean views when underway.

With wooden decking across hulls a standard fixture of the model, gone are the old notions of potential deck space being wasted with mere netting stretched between hulls. The outside area on this boat totals an impressive 194sqm, and the total indoor living area comes in at 236sqm. 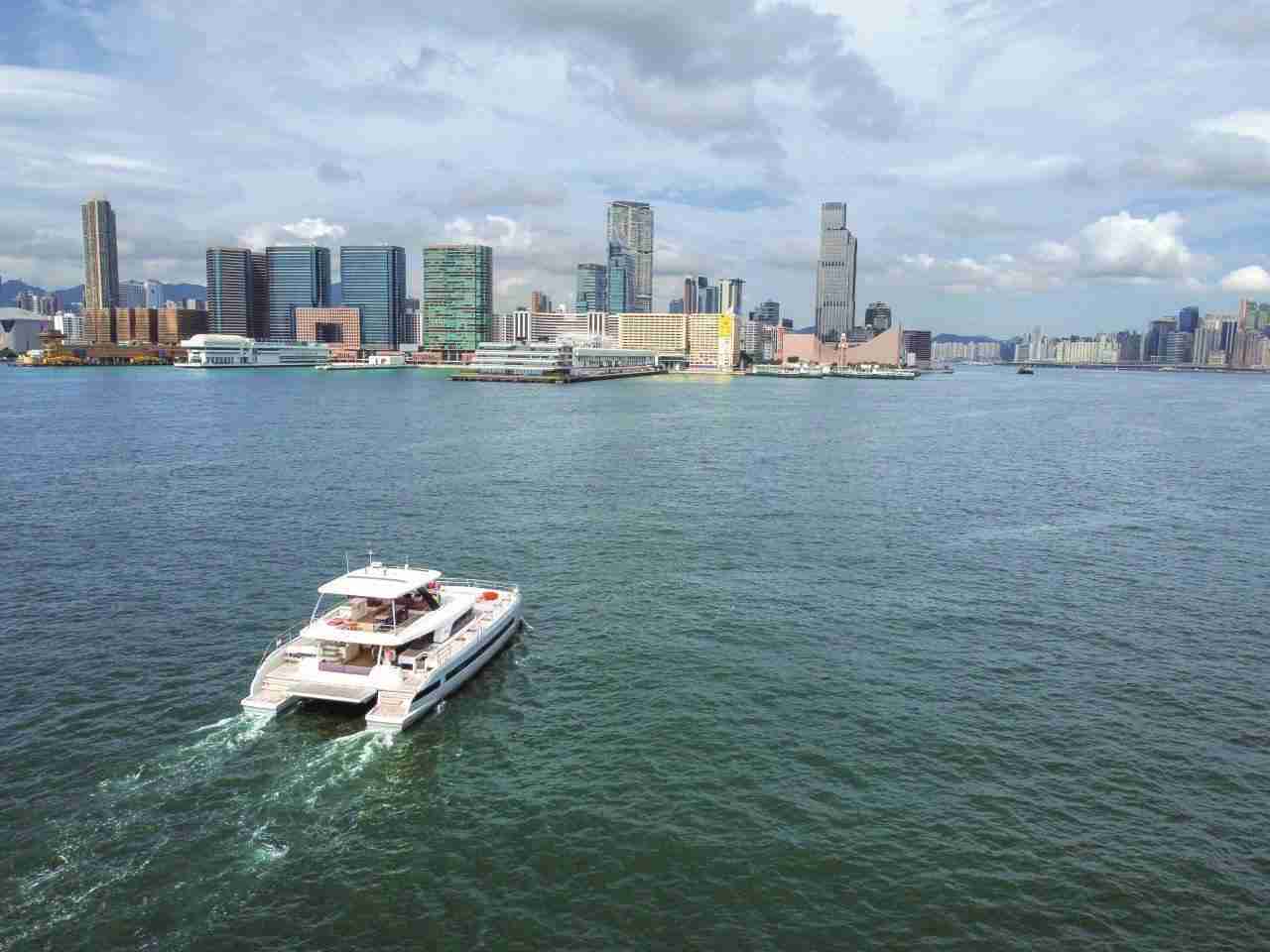 Choppy harbour waters are all the calmer with twin hulls

The owner selected marine teak decking for the flybridge to match the main deck outdoor flooring and maintain visual continuity. And speaking of the flybridge, that’s where the comfortable main helm station is housed.

The hardtop covering is thinner and lighter than that of its older sibling, the Lagoon Seventy 8, and fitted with inbuilt receding panelling. Also up on the top deck is sofa and recliner seating positioned around the helm for ease of socialising. There is a bar-type entertaining counter to hand, as well as cold storage and plenty of space for additional standalone furniture. 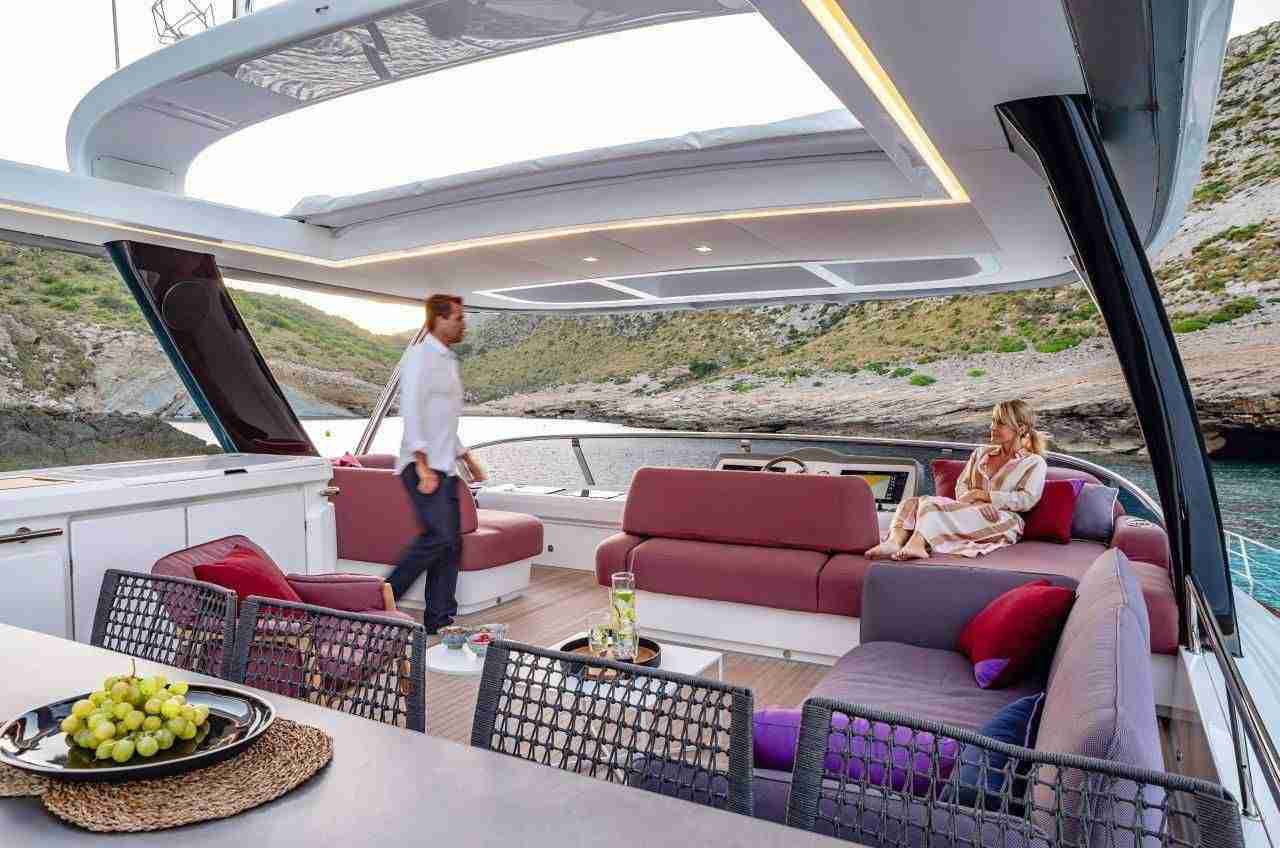 The interiors of the new Sixty 7 are predominantly open, with uninterrupted spaces creating a seamless segue between interior and exterior and offering panoramic views around the boat and beyond. This feeling of airiness is most notable in the saloon, which has a long, low drinks table and a taller dining table, each flanked by generous built-in sofa seating. A navigation helm station is housed forward of the saloon, next to full-length glass doors that open onto the bow.

Lagoon returned to its storied design team of VPLP, Patrick Le Qu√©ment and Nauta for naval architecture, exteriors and interiors, respectively. One thing that stands out on the Sixty 7 is the lack of straight lines – everything seems to have curves, be it the hulls, the superstructure or the tables and steps. The effect is to create a greater feeling of openness while reducing the “boxy” look that has bedevilled catamarans of the past. The rounded furnishings also make it safer for guests walking around while the yacht is underway. 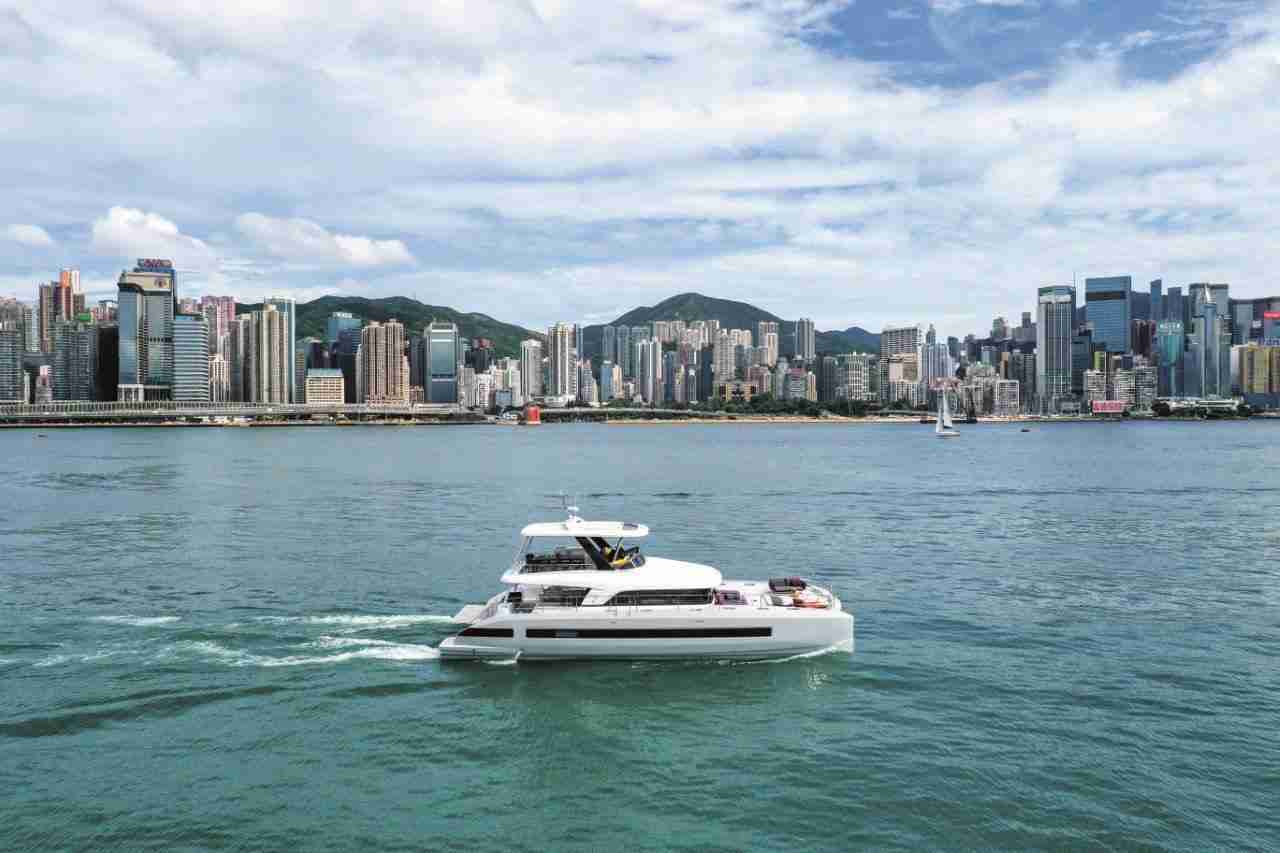 With a family of three, the Taiwanese owner of the new Sixty 7 opted for three guest cabins, plus additional berths for two crew members. Four heads/bathrooms were fitted in total, but Lagoon offers several layouts that can accommodate most owners, including crew cabins.

The master cabin is in the starboard hull lower deck, while two guest cabins – one a double ensuite configuration and the other with twin single bunks – plus a sizeable galley and dining booth with bench seating are all housed below decks in the port hull, along with a day head. Additionally, ample storage space allows for fitted cabinets, a very large fridge-freezer, a full-size oven and counter-top cooker, other kitchen appliances and a washer-dryer machine. Having the galley on the main deck is an option that, if selected, would allow for a cabin or two below.

There is plenty more additional light in the lower decks than in previous Lagoon motoryacht models, thanks to new narrow rectangular windows, which are fitted into what appears from the outside as a sleek strip along the length of the hull. 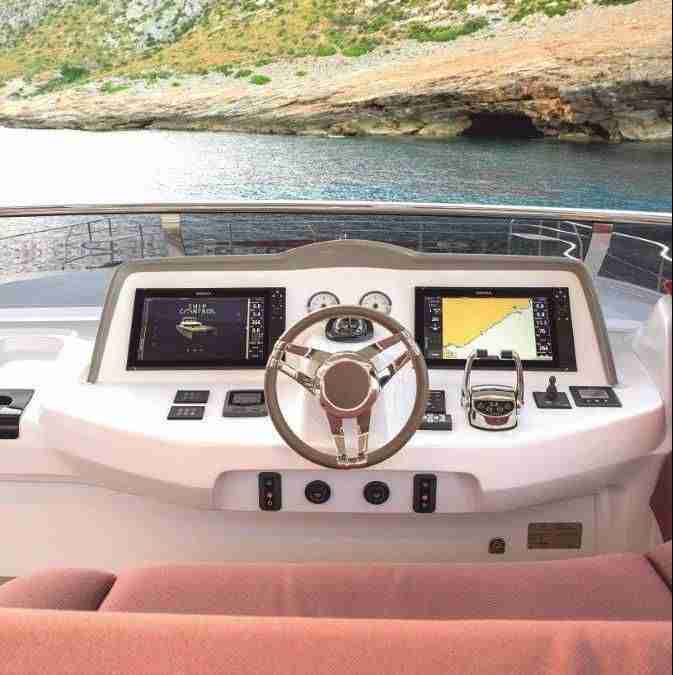 Forward on the bow area, Lagoon has made good use of the space created with a larger, motoring catamaran. Without need for sails, there is plenty of space. Lagoon didn’t just use the forward area as an afterthought, with a few sunpads thrown in. There is forward access from the main saloon via hatchway.

This leads to a sunken lounge area where a morning coffee and a bit of breakfast can await. Go up a few steps and you’re on the deck level, overlooking whatever bay or beach you’ve arrived at. Here, an array of furniture, from deck chairs to beanbag furnishings – whatever tickles your fancy – awaits. An optional sound system completes the ambience.

Test trials on the Sixty 7 have shown good range that Asian owners, who may wish to navigate considerable distances, will appreciate. In one instance, the Sixty 7 managed around 20 knots at full throttle. Running at a steady 2,000 RPM yields about 12 knots of boat speed and a comfortable range of 1,200 nautical miles. For a Taiwan owner departing Kaohsiung, that easily opens cruising destinations in the Philippines (Kaohsiung to Subic Bay, 490 nautical miles), Vietnam via Hong Kong, and much more.

Test trials on the Sixty 7 have shown good range that Asian owners, who may wish to navigate considerable distances, will appreciate 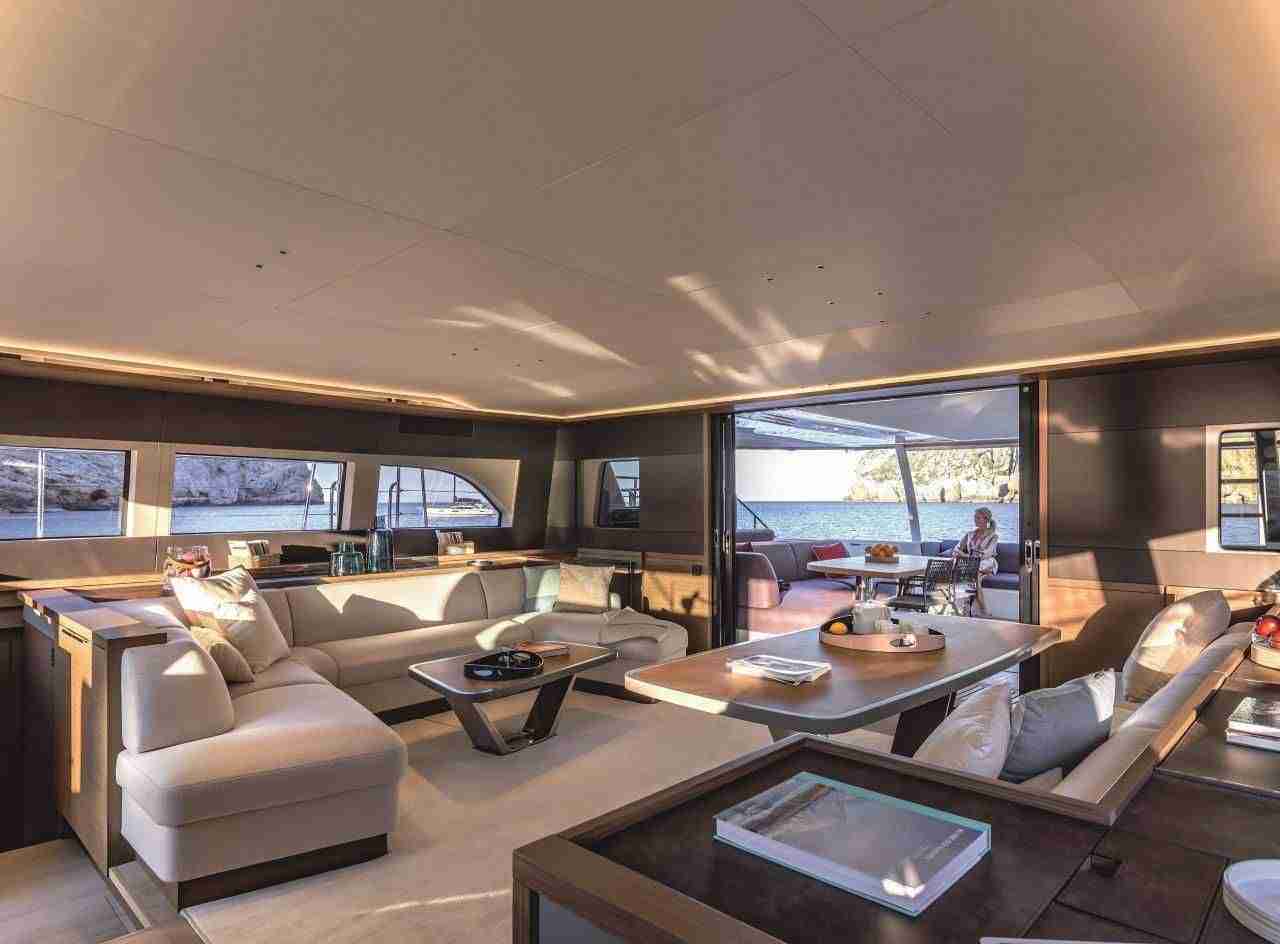 The saloon and cockpit transition with ease | Photo: Nicolas Claris

Bordeaux-based Lagoon has an impressive shipbuilding facility, with dedicated workshops specialising in making the twin catamaran hulls, bridge deck and projecting nacelle, and all decks and superstructures – which are produced from a composite of glass, balsa and vinylester. Impressively, in normal times, a prospective owner can expect completed production of this model within five months of ordering.

The Sixty 7 – globally premiered at the Cannes Yachting Festival in 2019 – is a smaller sibling to the flagship Lagoon Seventy 8 motoryacht, introduced in 2018, following the introduction of the sailing version, the Lagoon Seventy 7 (which celebrated her Asia launch in Hong Kong in May 2017).

Asia’s next Sixty 7 should be arriving early in 2023, and its owner is a previous motor-yacht enthusiast in the region, said to be very struck with trying this brand and model.