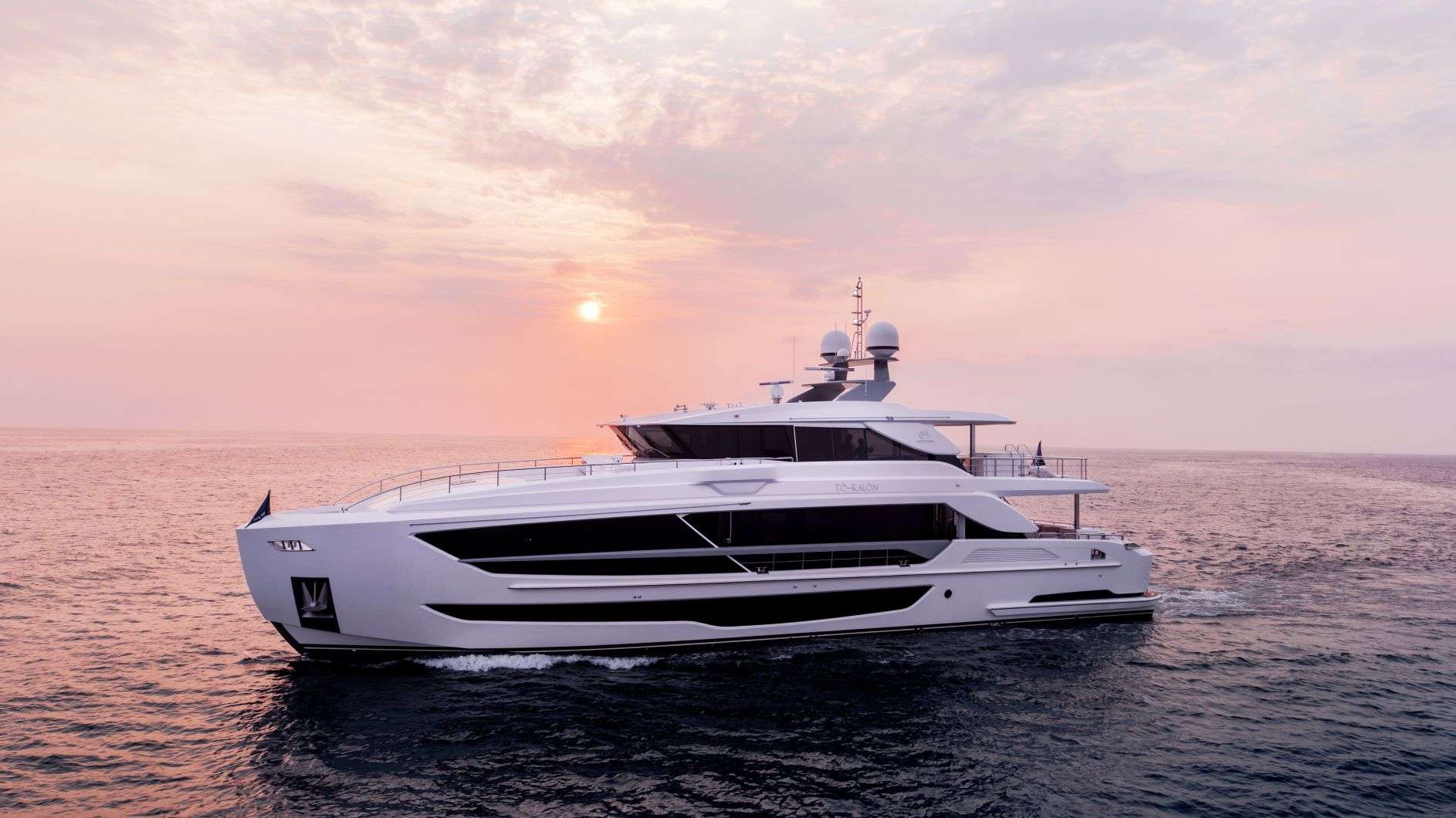 In May, Horizon Yachts of Taiwan launched the second in its FD102 series, To-Kalon, which refers to Plato’s concept of beauty. Her American owner, David Copham, says “We have Cor D. Rover to thank for the basic concept, which we think will be quite well received in the yachting community.” Rover designed Copham’s previous yacht, a Burger yacht also named To-Kalon.

The new To-Kalon is Copham’s first yacht build with Horizon, and judging from his commentary, he was pleased with the results.

Horizon Yachts has been willing to experiment over the years in ways that most other Asian yards do not. Horizon was the first to try all-solar powered catamarans in the 2000s, long before the intense interest they generate now. 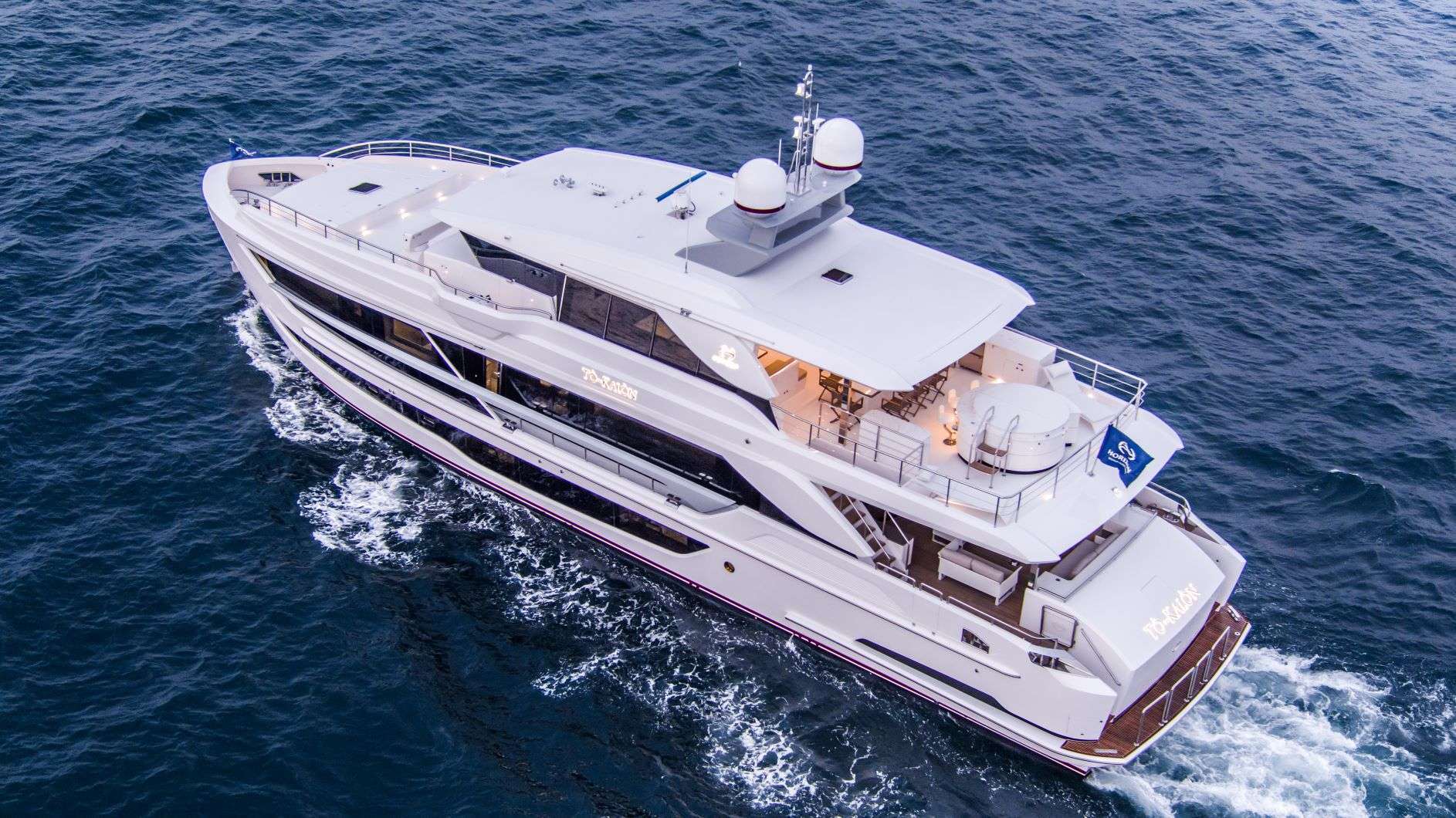 The FD (FD stands for Fast Displacement) series was introduced by Horizon Yachts in conjunction with Cor D Rover and aims at delivering huge interior volumes in a solidly designed hull that yields great performance.

Rover developed the concept for the series, which took inspiration from the popularity of SUV cars in Europe. He approached Horizon CEO John Lu at the Fort Lauderdale International Boat Show with his FD concept for a 78-foot yacht, with lots of volume and large windows, and five staterooms. 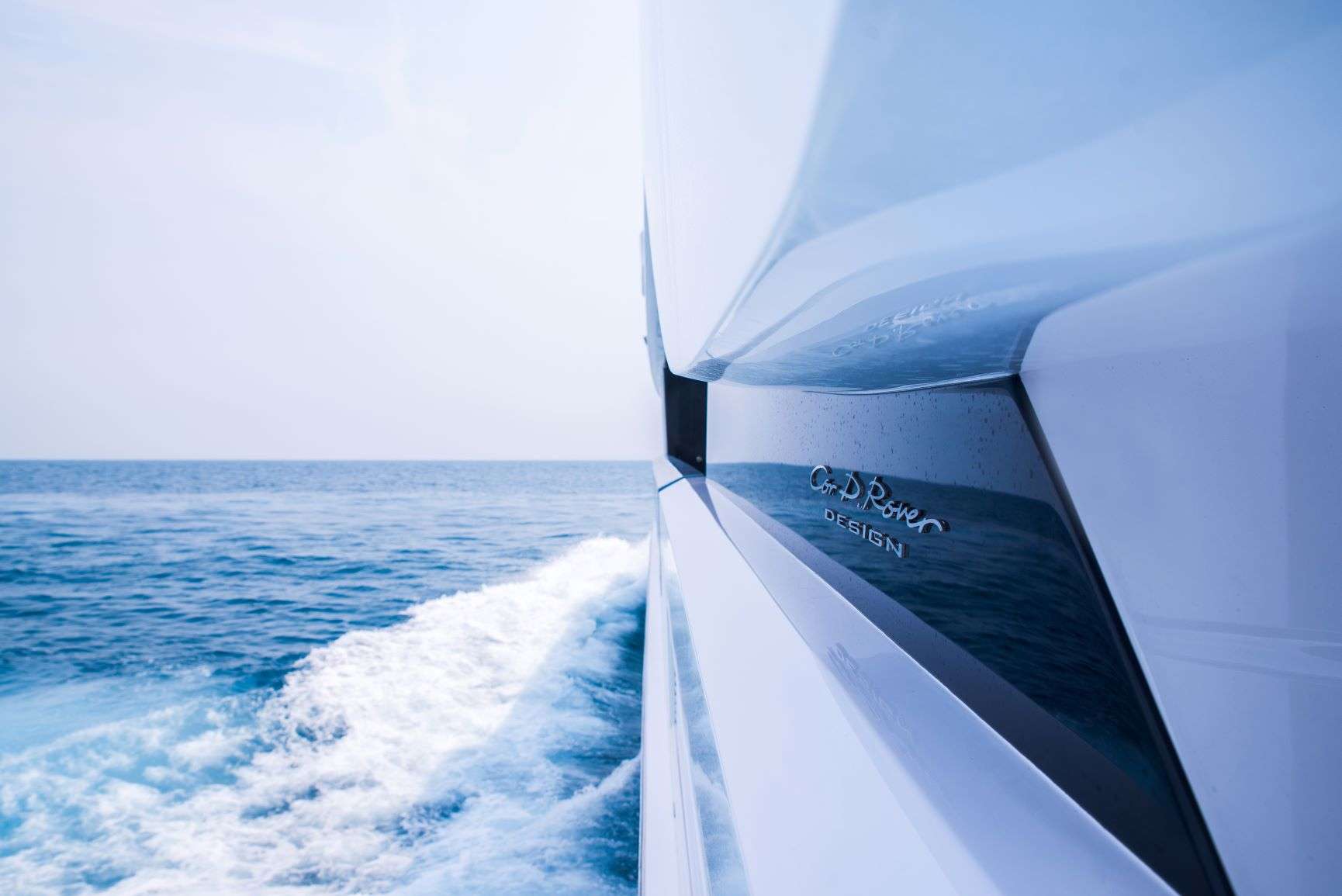 “John immediately understood our idea and saw the potential for this type of yacht and what it could give to his clients,” says Rover. “I was brave to put it on paper, but John was even braver to develop it.” The FD series, which runs from 75 feet to 125 feet, was introduced at the Taiwan Boat Show in 2016.

Horizon developed a wave-piercing bow and hull design for the FD Series platform that focused on efficiency and a comfortable ride. The wave-piercing bow extends into a long skeg that runs the length of the hull, creating better directional stability.

The wave-piercing bow combined with a hard chine at the front of the hull reduces drag and increases waterline length for performance. Soft chines from the amidships and tunnels in the aft area further reduce resistance. The FD series hull also allows for a shallower draught.

The wave-piercing bow extends into a long skeg that runs the length of the hull, creating better directional stability

Horizon has reportedly sold over 20 FD Series yachts in the years since the first launch. One FD yacht even came with a helipad for an Australian owner. “The fact that we sell so many and that other brands are following suit with big-volume designs of their own proves that this concept works,” says Rover.

“Just like Porsche did when creating the Cayenne SUV, we did the same with the FD Series,” says Rover. “Now the rest of the market is following us. Volume is king and will always be.”

To-Kalon accommodates up to 10 guests in five staterooms, including a full-beam master cabin. The on-deck master stateroom they specified a his-and-hers en suite as well as his-and-hers walk-in closets.

The owners requested a semi-enclosed flybridge with sliding glass windows, letting the majority of the upper deck to function as an indoor/outdoor space. Just aft of the pilothouse, a U-shaped seating area opposite a dayhead and full bar with fixed bar stools is protected under the hard top.

“Just like Porsche did when creating the Cayenne SUV, we did the same with the FD Series” – Cor D Rover 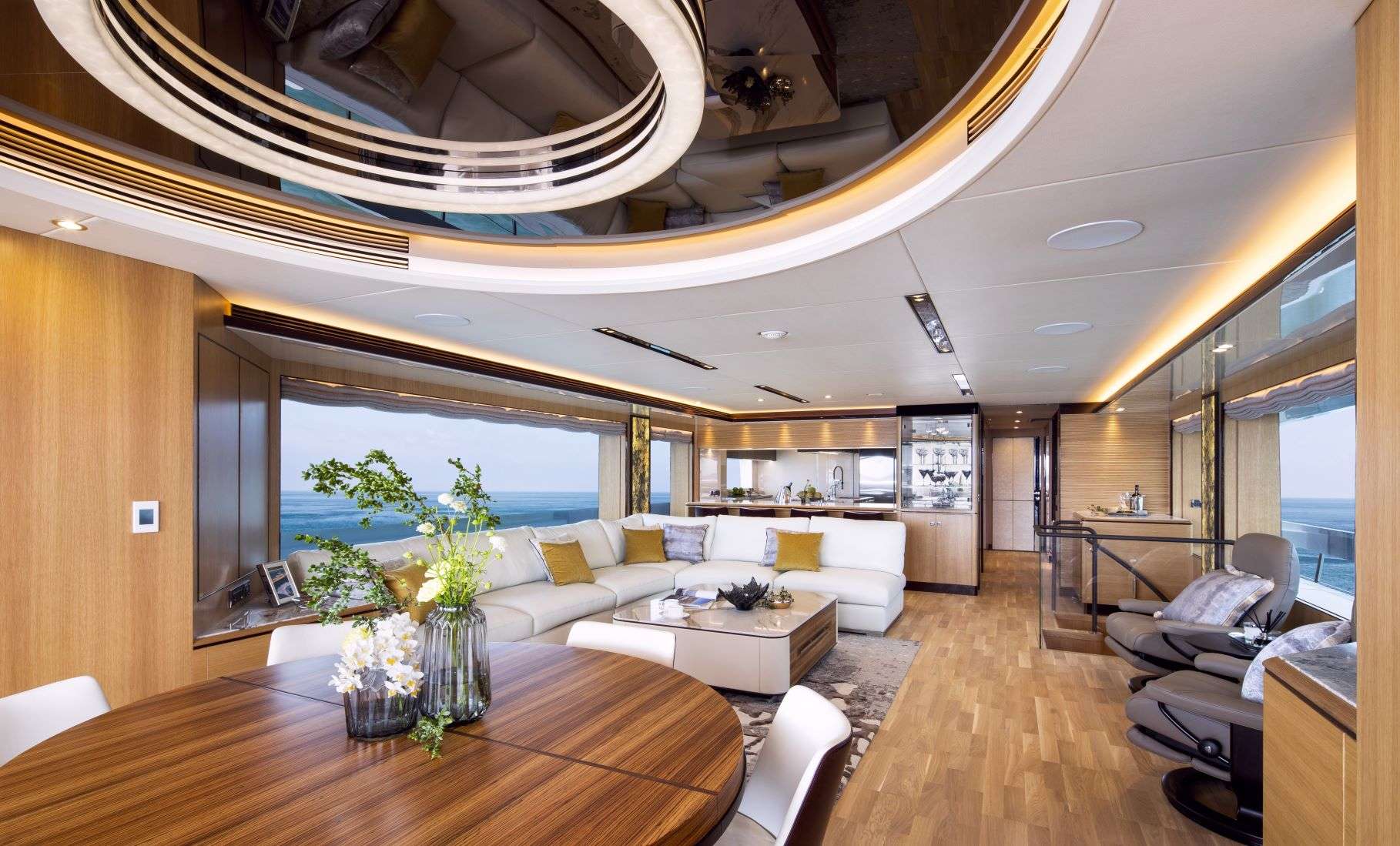 The deck area aft is fitted with an extendable dining table for up to 12, a BBQ and a Jacuzzi tub for six with a bar counter and fixed stools. This portion of the deck can be shaded by an electric awning.

The tender storage area was moved to the bow, where a crane is situated just forward of the helm station. This helped to maximise socialising space at the aft deck.

On the main deck, a bar, storage and TV area is located to starboard. The owners also asked for curved glass doors to the main salon and positioned the interior dining area aft to take advantage of the views. A round table for six can be extended to seat ten beneath a custom circular light fixture. 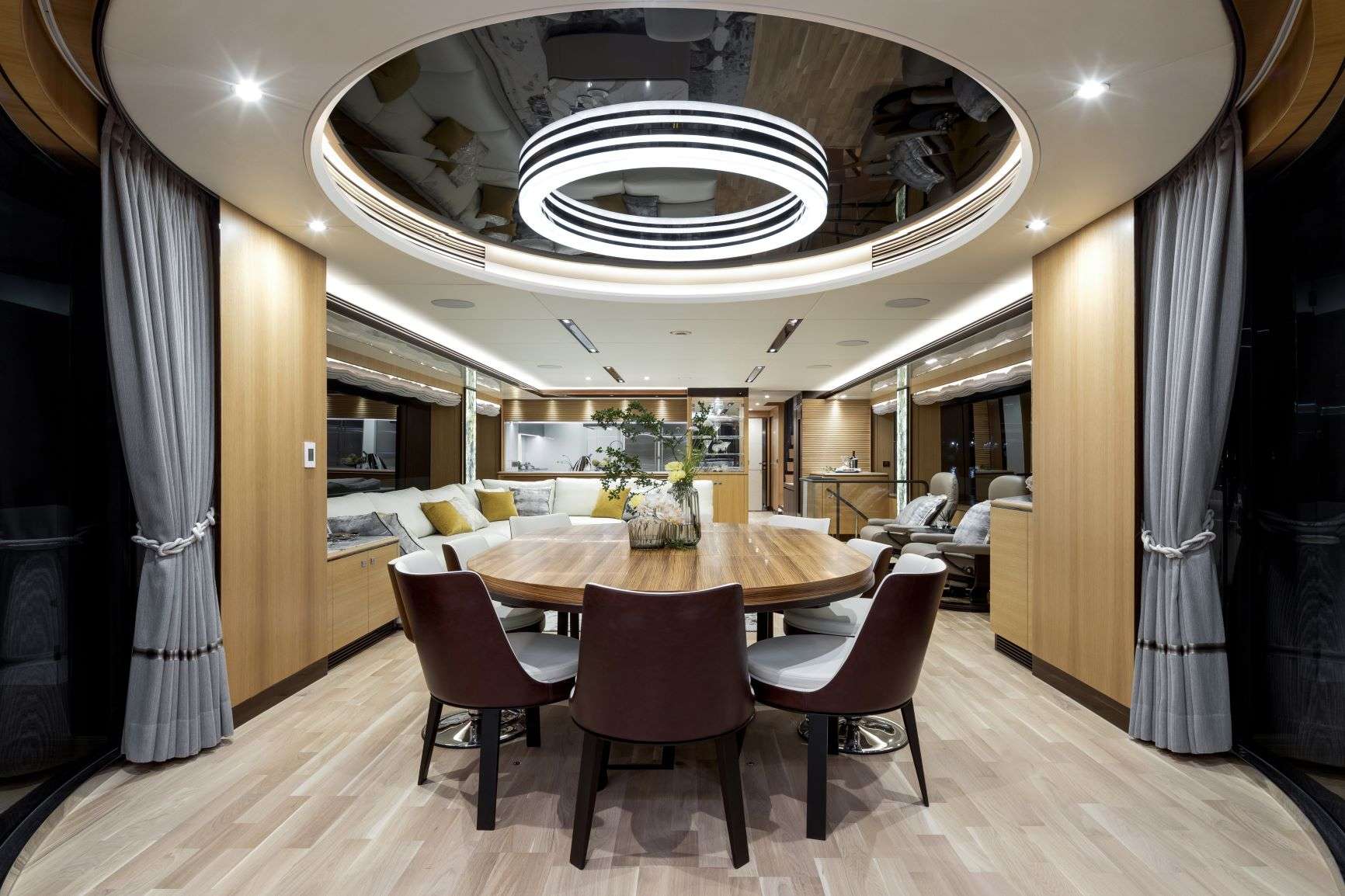 The galley was another important space for the owners, who customised the layout and commissioned professional-standard appliances. There is a carved design in opaque glass for the Hi/Lo partition separating the galley from the salon.

The owners requested a semi-enclosed flybridge with sliding glass windows, letting the majority of the upper deck to function as an indoor/outdoor space 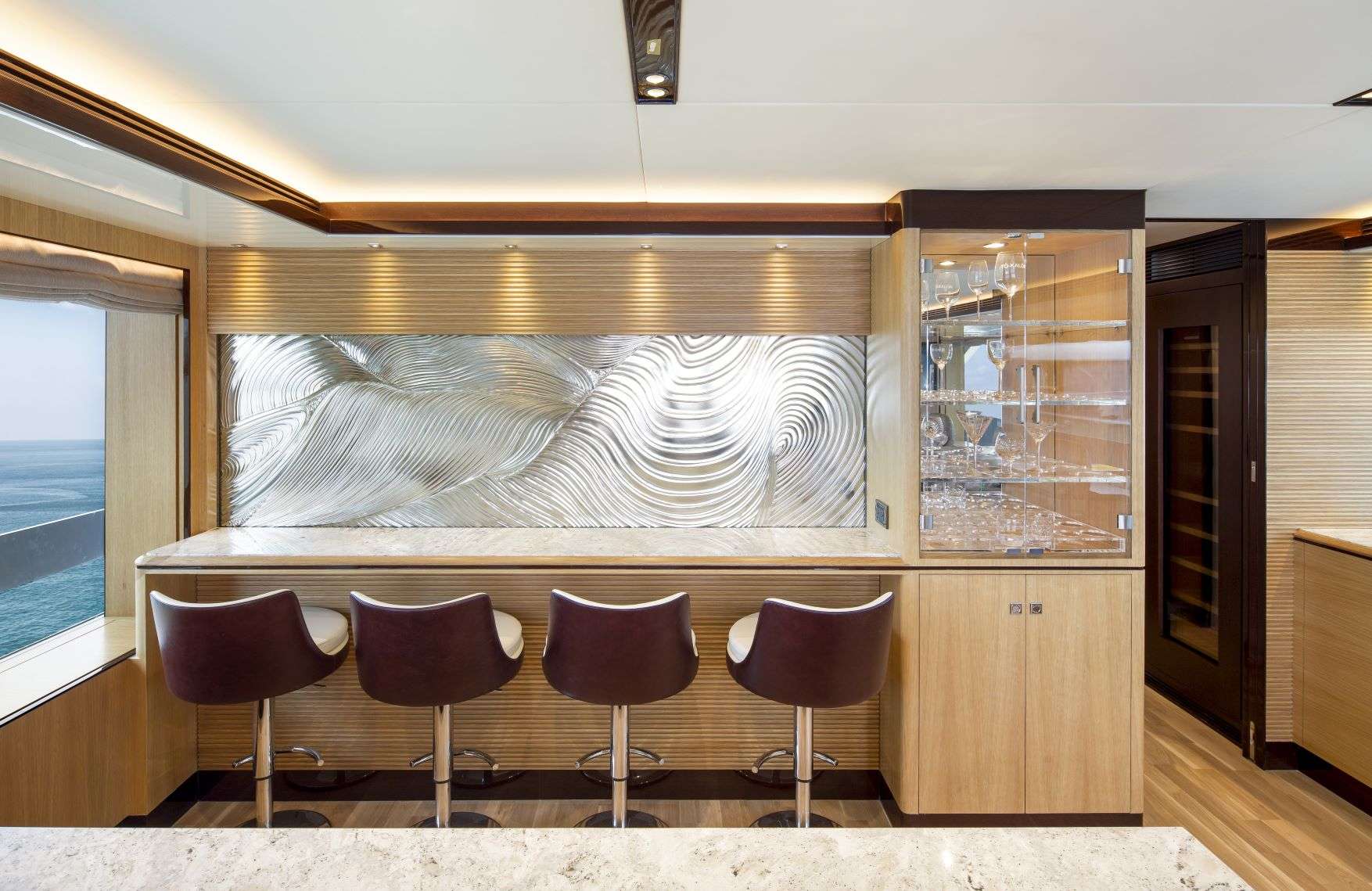 The overall effect is a bright, attractive interior that doesn’t get in the way of the enormous views offered by the large windows that are a main feature of the FD series. To-Kalon is to be on display at the Fort Lauderdale International Boat Show this October. Given the success the FD series has had so far, and that a FD 102 is now in Europe and one in the US, it’s highly likely Horizon Yachts will be launching more high volume, fast displacement yachts in the near future.