Beneteau has selected its Grand Trawler line for a new powerboat flagship, which delivers range and practical design sense for those wanting to explore shorelines for extended periods in comfort 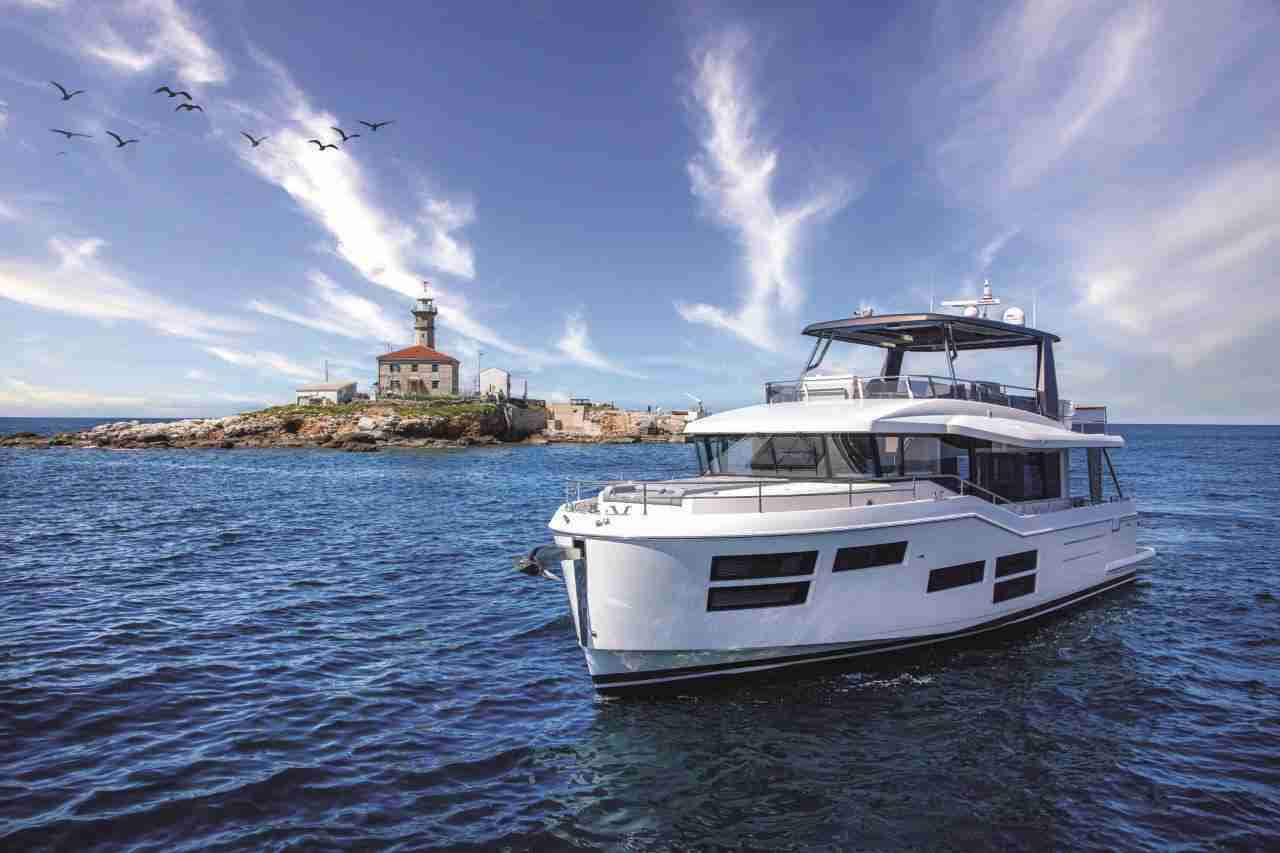 For most buyers in Asia, the Beneteau brand is synonymous with sailing. But according to Yann Masselot, the brand director of Beneteau, the company started out as a builder of powerboats for French fishermen. It was only much later that the company expanded into sailing yachts. But the roots of the company are in its powerboats. The new Beneteau Grand Trawler 62, unveiled to the public at the 2021 Cannes Yachting Festival, makes a lot more sense in that light. The 62 is the biggest yacht produced by Beneteau (the brand, not the group) and on my tour through the boat at the show, it was clear why Beneteau was selling one a day at the event. The 62 builds on Beneteau’s range of trawler boats, known for fuel efficiency and operating at a slower speed. The French boat-building giant partnered with the rising star in fuel-efficient naval architecture, Micad, to guarantee the best possible range. Micad, founded by Amedeo Migali, has become the new go-to Italian engineering firm for several shipbuilders, most especially Beneteau, which will be expanding its partnership with Micad. 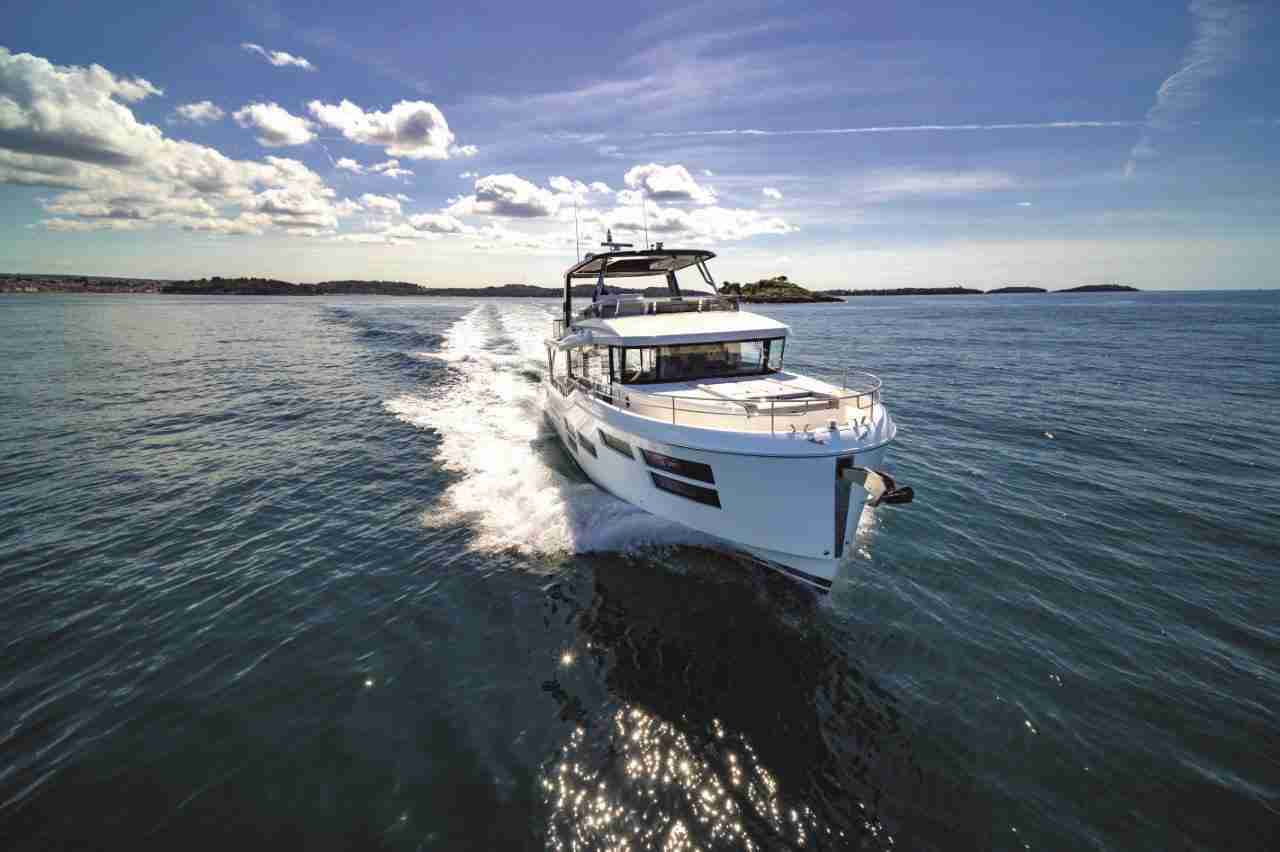 Masselot says that the new 62 can motor at nine knots, consuming 30 litres of fuel per hour, yielding a range of well over 1,000 nautical miles. The first hull was tested in January 2020, and it sold quickly. Fitted with twin MAN 730 horsepower engines, the 62 has enough power to reach 20 knots when required. At the same time, owners and guests can enjoy the comfort that is brought by its displacement hull when at slower speeds. As of the Cannes Yachting Festival 2021, eight 62s had been sold, with a build slot that was kept open for Asia. Yann Masselot reckons that the market for trawler-style boats, famed for range over sleek appearances, is picking up in Asia, as clients discover the benefits of going slower but farther. The bow was built high and wide at the deck level, while a sharp entry and generous chine also helps ensure a smooth ride while underway. The height of the bow allows a better degree of safety at sea, and it also means more head room in the bow area below deck. 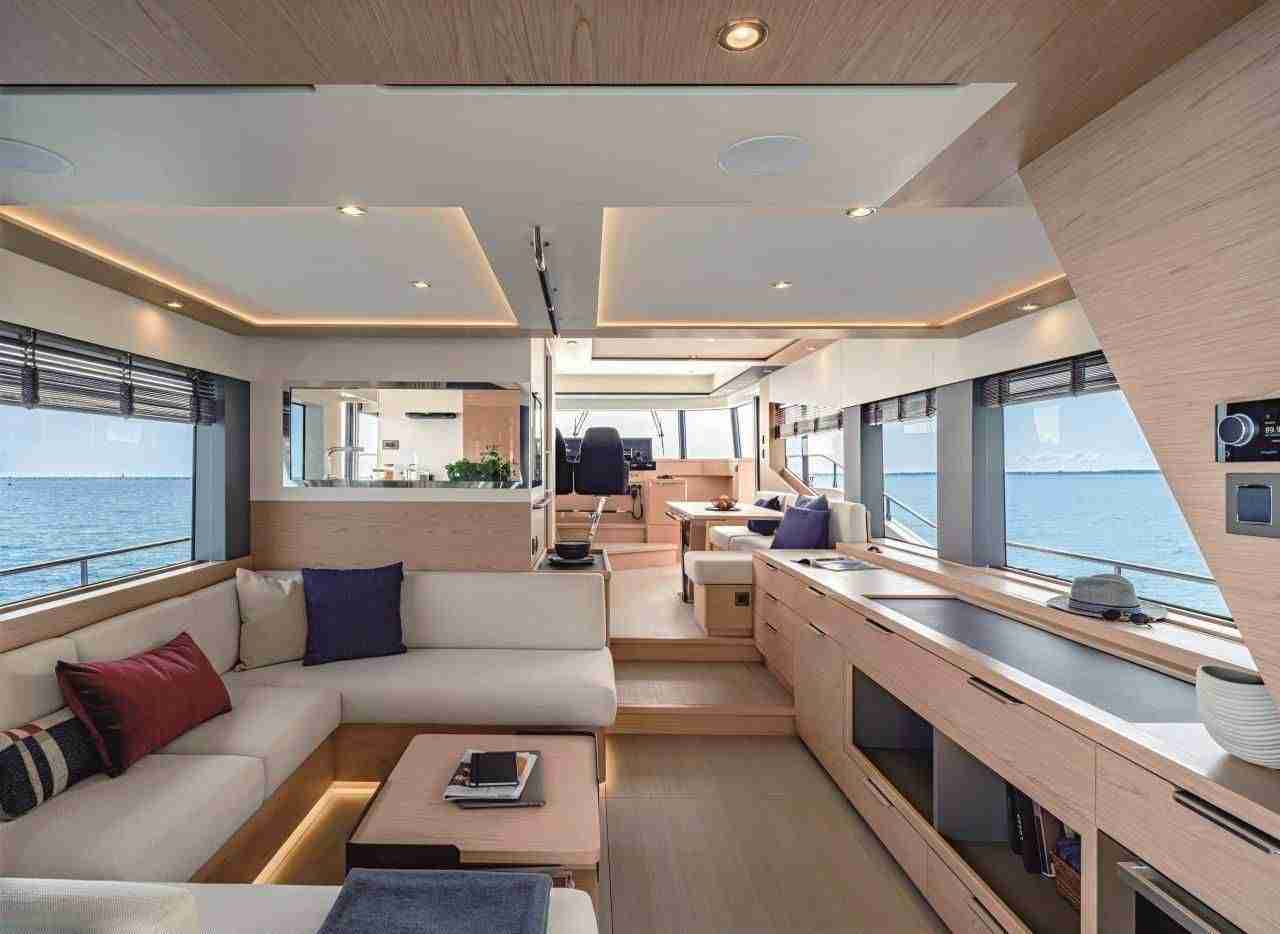 The forward helm station is comfortable and sensibly designed. With its forward position and forward-facing windscreen, the main-deck helm has a perfect sightline across the yacht. This has been aided by the new trend towards a clear aft deck area with glass wall instead of GRP, also allowing the helm a straight view all the way back to the stern of the boat. There is a starboard side door next to the helm station, for better access and visibility while taking on tight manoeuvres.

Raymarine provide the 16-inch, easy-to-read displays and the seating is comfortable, making longer cruises more enjoyable for the pilot. Buyers can also opt for the latest in joystick control for easier handling. A set of stairs accesses the flybridge directly behind the helm station, making circulation and communication between upper and main deck helm stations easier. 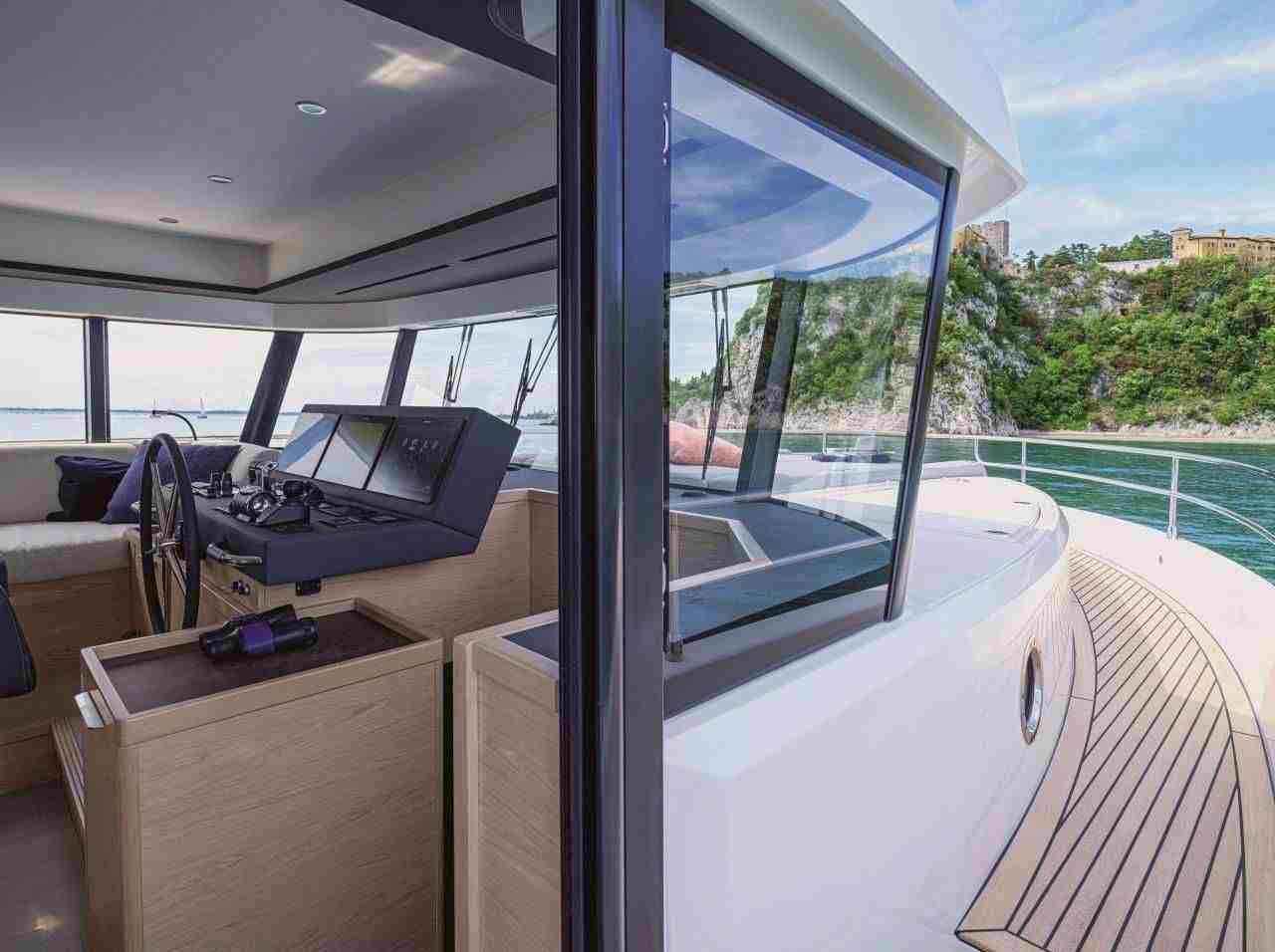 Stepping on board, one gets a sense of both space and practicality. The interiors were developed by Nauta Design, the firm made famous for designing the inner sections of a variety of boats, from the world’s largest superyachts to open runabouts. The living areas are sectioned off, creating cosier spaces. Storage areas for everything from dried goods to clothes has been created everywhere. The light and airy interior belies the serious sense of purpose on the Grand Trawler 62. Moving around the interior and exterior is easy and safe. Grabrails are everywhere, including on the ceiling of the main saloon, while passageways to the flybridge or the bow are wide and feel secure. Beneteau has sold over 1,300 trawler boats and therefore has the advantage of plenty of client feedback on practical issues. The galley amidships on port side features a handy trash disposal unit that directs odours outside – much appreciated during extended stays onboard. Little things like this can add up to a lot.

Yann Masselot reckons that the market for trawler style boats, famed for range but not for sleek appearances, is picking up in Asia 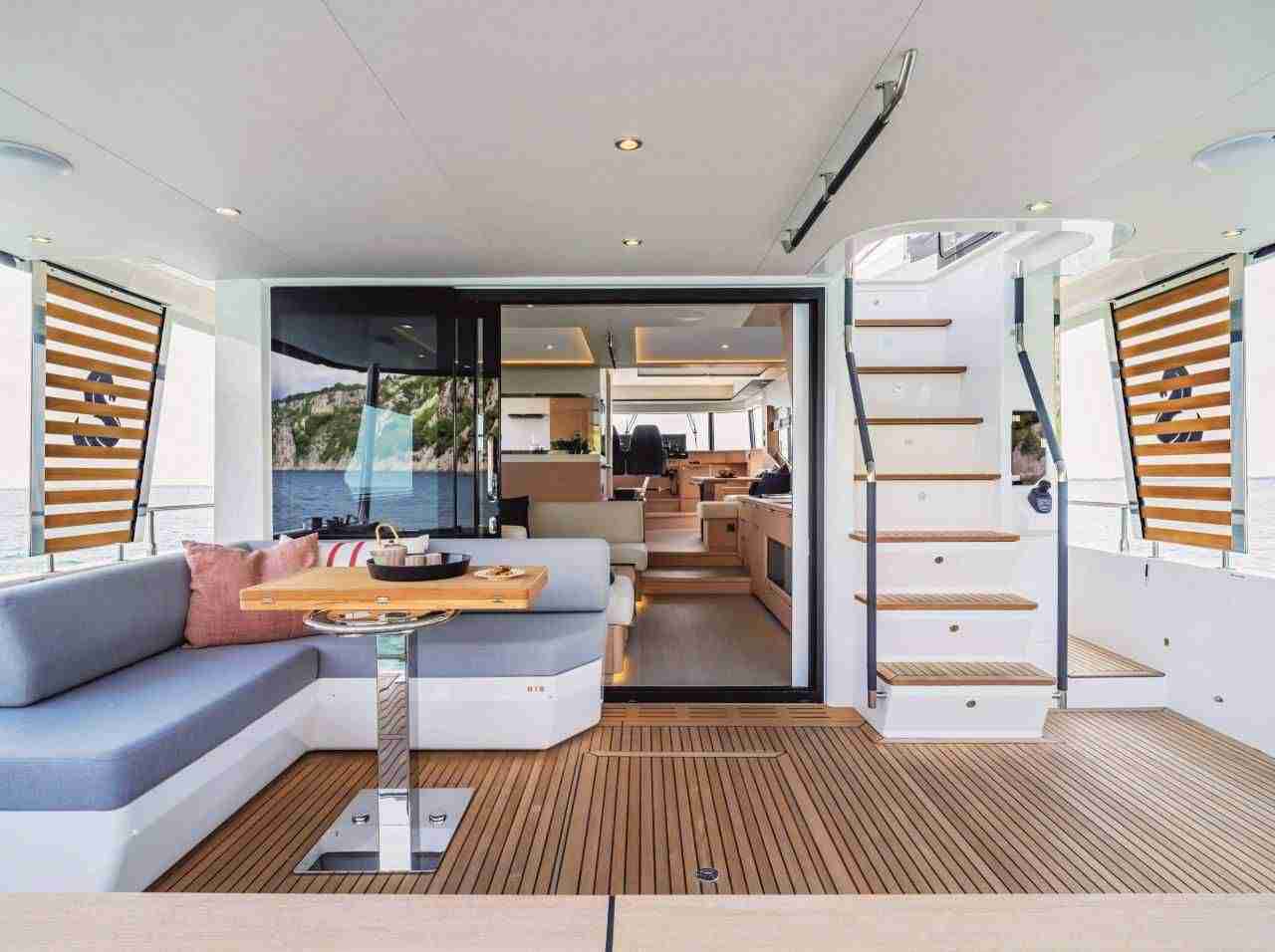 The aft cockpit is well sheltered but has plenty of airflow | Photo: Nicolas Claris

The aft cockpit features the glass rear wall, which permits sightlines from inside the yacht to the stern. This makes the area seem more open and makes it easier on parents watching children play. It also means that instead of crowding the aft deck with forward and rear-facing seating, there is a single table with aft-facing seating. The main galley is in a forward, port-side area, ahead of the saloon, while an interior dining area has been placed at a settee on the starboard side passage to the helm. The galley feels over-sized, and guests will be pleased with the amount of cold storage. The galley can have a sliding door to access the saloon if more privacy is required. But most leisure time will be spent on the incredibly spacious, 34-square-metre flybridge. If there is a mantra for modern yacht building, it is ‚Äòsqueeze out more space’. Beneteau has done this admirably on the 62, with a hardtop covering that can be opened to allow more sun. A wet bar, table, settees and of course, the helm station, combine to make this area thoroughly enjoyable at whatever far-flung destination an owner may be. An optional davit is available.

With the new Beneteau Grand Trawler 62, the French company has put the experience of thousands of miles travelled and hours spent at sea into its new flagship yacht 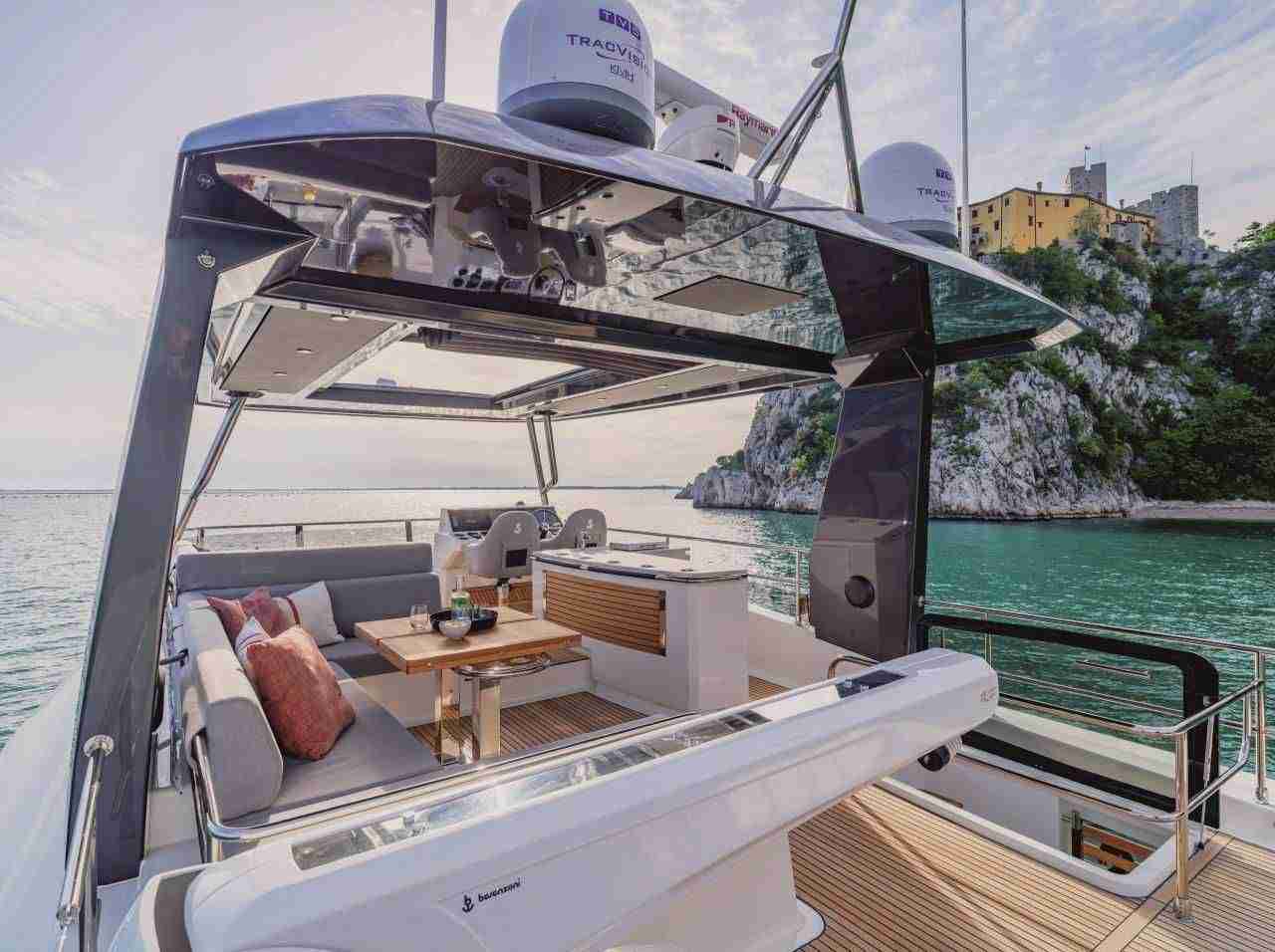 The expansive flybridge can be tailored to owner demands | Photo: Nicolas Claris

Below decks, buyers can opt for a two large VIP cabins, one amidships and one artfully placed at an angle in the bow. The bow cabin bed is roughly positioned at a 45-degree angle to the centreline of the boat, allowing for easier movement around the bed, rather than would be found in a normal arrangement. Combined with the headroom made available by the high bow, the bow cabin is worthy of the title, VIP cabin. Two twins round out the standard layout, though owners can opt for more single beds in the master cabin amidships. Throughout, the living quarters on the lower deck are roomy and bright. The shower stalls don’t pinch, even when a large individual enters. A crew cabin for two has been built into the aft area, just forward of the swim platform. It is easily accessible and has all the utilities needed for a long-haul trip. The engine room is clean, bright and spacious, making maintenance much easier. With the new Beneteau Grand Trawler 62, the French company has put the experience of thousands of miles travelled and hours spent at sea into its new flagship yacht. It is telling that in stepping up its powerboat range, it opted for a boat meant for exploration and long stays at sea. With one sold each day at the Cannes show, it’s likely a new 62 will arrive in Asia soon.