The new Galeon 325 GTO is the Polish brand’s first foray into outboard vessels. The builders have incorporated an array of features that make this a fantastic entry-level yacht for a first-time boat owner, or an incredible dayboat for experienced operators 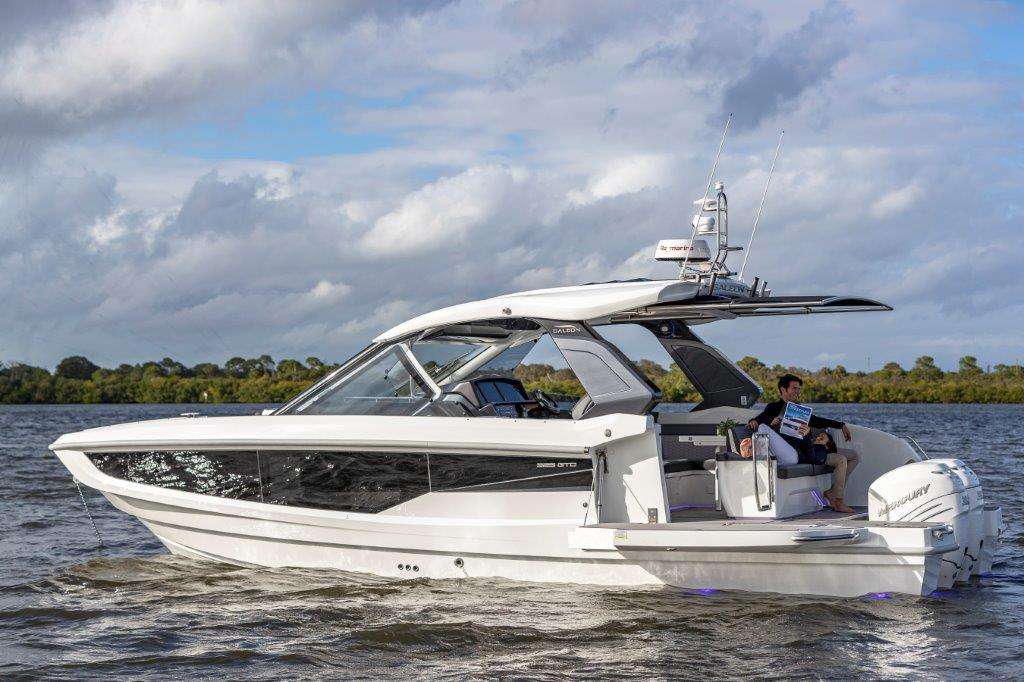 Drop-down sides have become a design hallmark for Galeon models, and the new 325 GTO is no exception

Polish yacht brand Galeon is moving along at speed. The company was founded in 1982, when a small yard outside Gdańsk, Poland’s historic shipbuilding city, began building yachts under its own name.

Since then, big things keep happening. A partnership in the mid-aughts with UK naval architect and designer Tony Castro broadened Galeon’s market from the Baltic to the world. In 2016, US boating giant MarineMax signed a deal to market Galeon yachts in the US. Galeon earned fame in part for the yard’s willingness to challenge conventions in design and function.

That innovation included the drop-down sides of their yachts, which have become a trademark of the brand.

The new Galeon 325 GTO is the first of a new Grand Touring Outboard series of yachts designed to showcase the brand to a new group of buyers. The company plans to build GTOs up to 40 feet or more in the next few years. The move to outboards reflects similar developments by other brands to have outboard-driven, entry-level yachts in their model line. 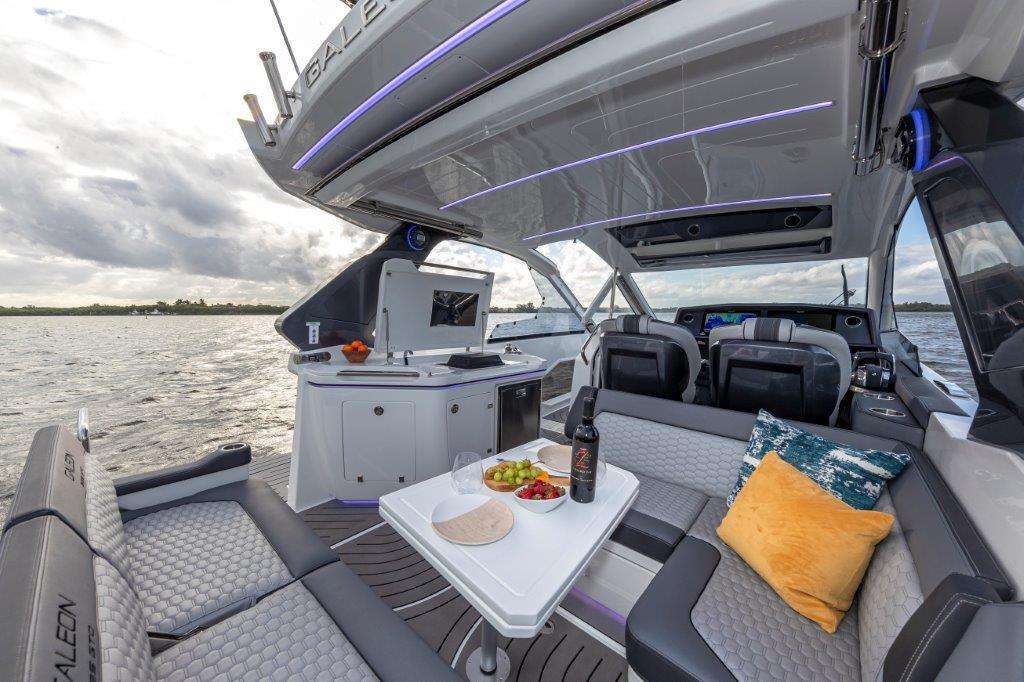 The helm station has great visibility for operators

There are even aft-facing speakers built into the bow, so guests can enjoy their favourite tunes while underway

Galeon has brought to its new outboard yacht the passion for innovative thinking that has earned the name so much respect.

The outboard engines are surrounded by an elevated swim platform, which adds a level of safety. It is also an excellent option for getting on and off the yacht while the boat is at the dock.

The platform just forward of the outboards can be raised, allowing the engines to be lifted out of the water.

The drop-down sides, so extensively used in other Galeon models, has been worked into the new 325 GTO as well. The electro-hydraulic mechanism is operated by push-button control, and it is sturdy. This may be the smallest yacht available with such a feature. At anchor, with the port side down, owner and guests will be able to enjoy a large amount of space on this entry-level yacht. 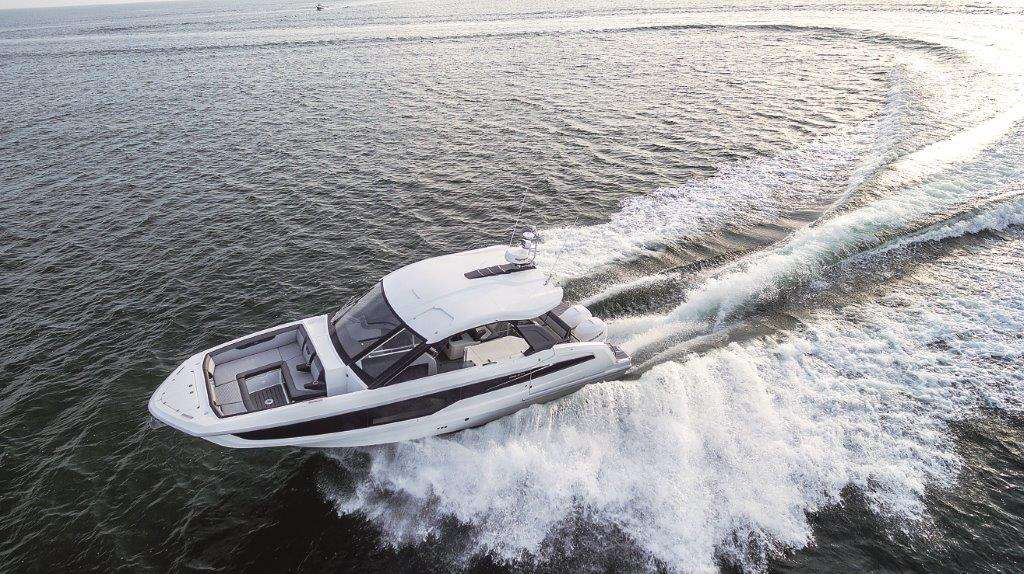 At full throttle, the 325 GTO got up onto the plane in less than five seconds, passing through 25 knots in less than 15 seconds

An optional push-button awning can be electrically deployed over the aft deck area. The centrally aligned aft seating can be shifted to face aft or the bow. A portside grill has been built into the aft area, and a swim ladder is tucked into the portside aft deck area, completing the swim platform space.

At the bow, Galeon has created an enormous lounge area reminiscent of a bowrider boat, with the full beam carried as far forward as possible. There is seating all around the square-shaped area that is quite deeply inset and offers a good deal of protection, even when the yacht is underway. Access to this space is via a portside access hatch and is all on the same deck level so that guests can move forward to the bow with a minimum of effort.

The bow area can be fitted with a table that raises or lowers. In the up position, guests and owner can enjoy a full meal at anchor. Drop the table down, and cushions can be added to create a giant sunpad. 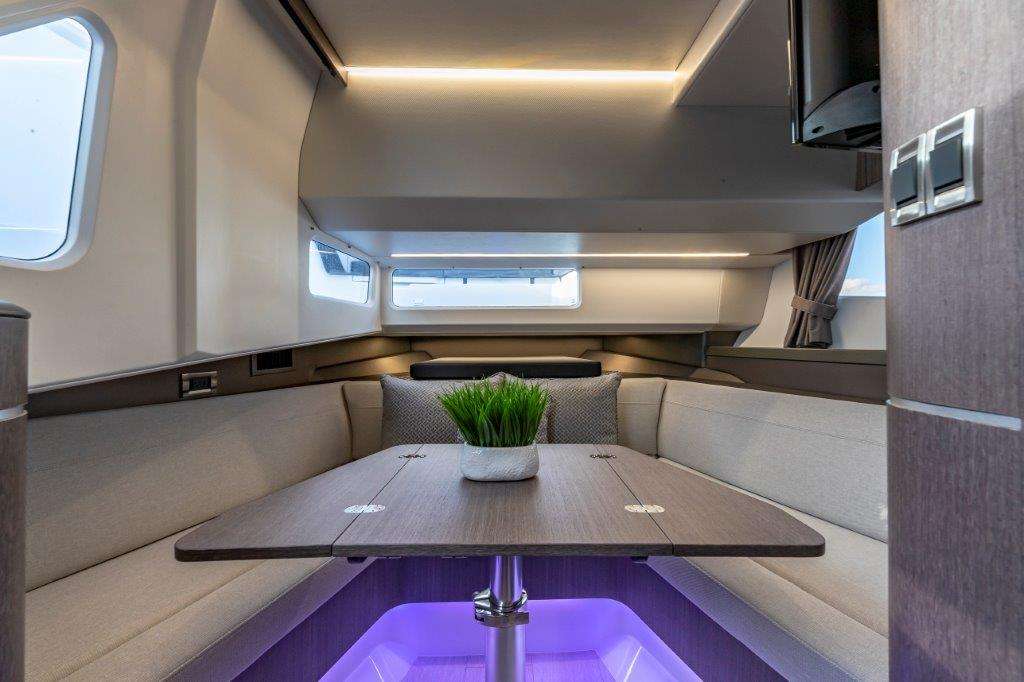 There are even aft-facing speakers built into the bow, so guests can enjoy their favourite tunes while underway.

That large bow area up front also translates into a sizeable forward area below deck, with portside stair access. Here, there is enough space for two people to relax with a drink. The head includes a stand-up shower. Amidships is the main cabin, filled with light thanks to the large side windows. The table in the cuddy can be dropped down to create an additional sleeping area, should the owner and family plan an overnight jaunt. 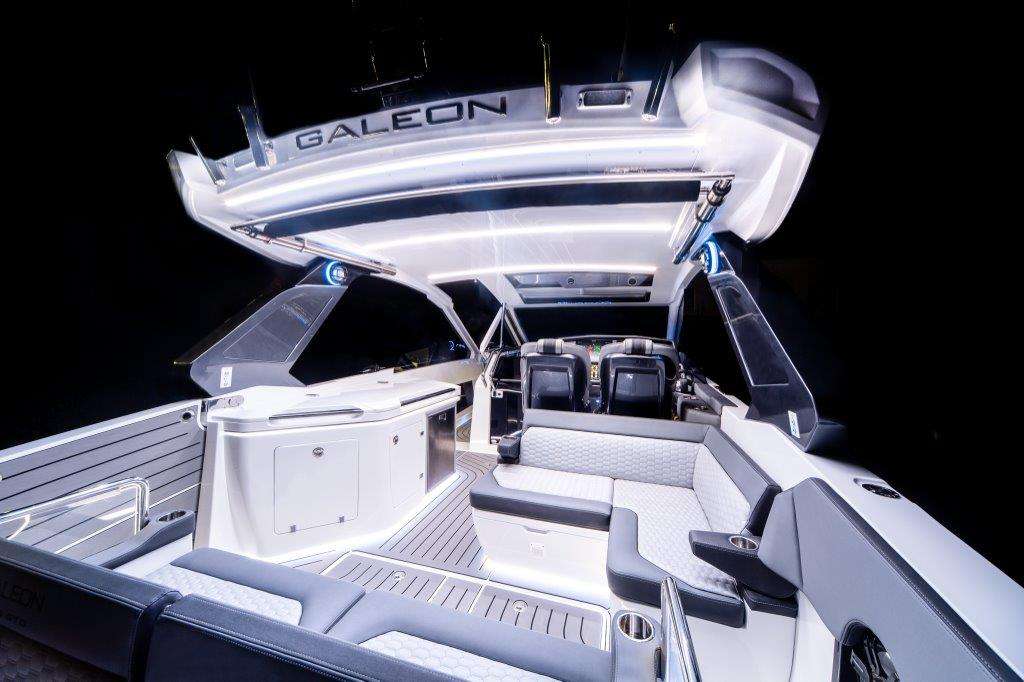 The Galeon 325 GTO is powered by two Mercury Verado 350 engines. On trials by Boattest, the 325 has maxed out at over 35 knots, with a best cruising speed of around 31 knots, burning about 147 litres per hour for a range of about 160 nautical miles with a reserve on the 850-litre tank. At full throttle, the 325 GTO got up onto the plane in less than five seconds, passing through 25 knots in less than 15 seconds. Reviews have cited the 325’s agile and responsive handling.

Galeon Yachts are distributed in Hong Kong, Singapore, the Philippines, Thailand and Vietnam by Asiamarine. A special version of the 325, featuring a much larger aft sunpad, is being brought to Hong Kong by Asiamarine.