Extra Yachts, the new brand in Italy‚Äôs Palumbo Group, offers an inventive approach with Haze, its Extra 86 launched late last year. The owner started by asking his interior designer to select the model and manufacturer for him. The result is a yacht that brings together the exterior deck and interior in dramatic fashion 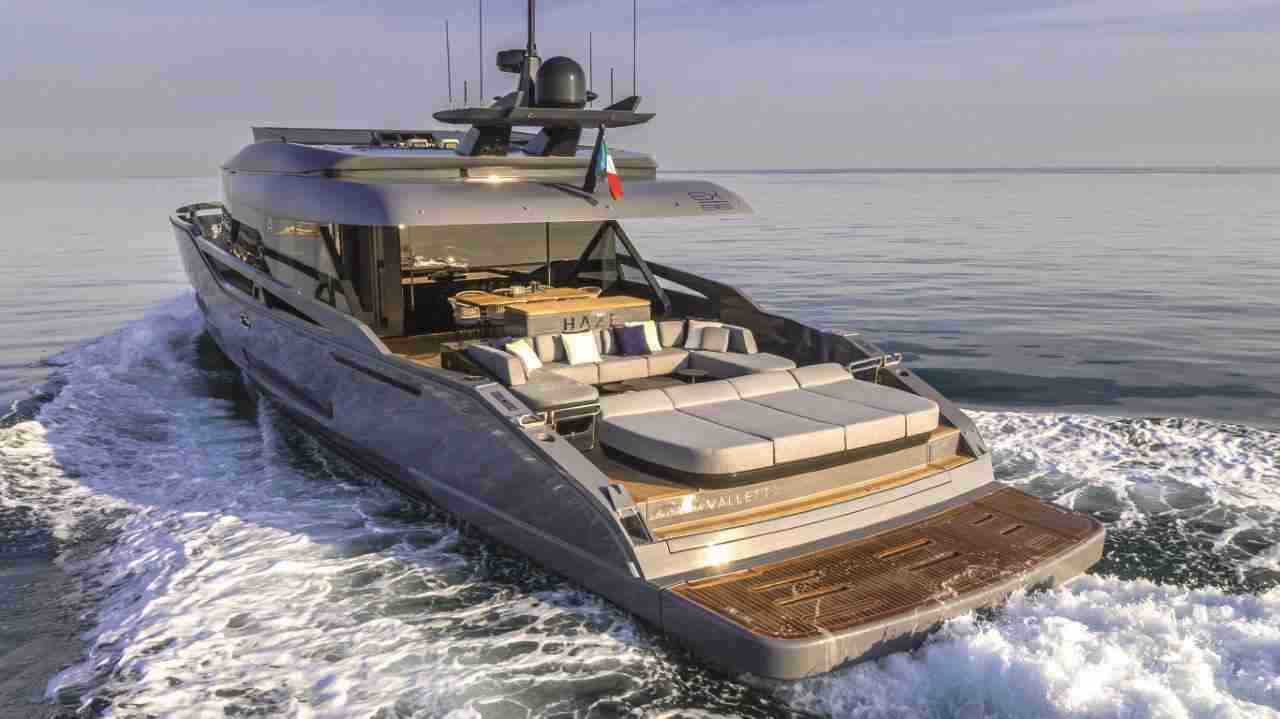 Extra Yachts is a newcomer to the Italian yacht building tradition. Extra began in 2019 and has launched five yachts to date, including their latest,¬†Haze, a head-turning yacht that is now available for charters in the western Mediterranean with Fraser Yachts.

Extra Yachts seems to have borrowed some of the design language and ethos of Arcadia, another Italian upstart that pioneered a wide-bodied yacht with features that include a fuel-saving ethos.

In 2019, ISA Yachts, one of the brands in the Palumbo Group, spun off its new Extra series into its own brand. The idea behind Extra was to create a yacht with a more direct appeal to younger, newer yacht buyers and charter guests. The first Extra Yacht, another 86, was reportedly purchased by an existing ISA customer. 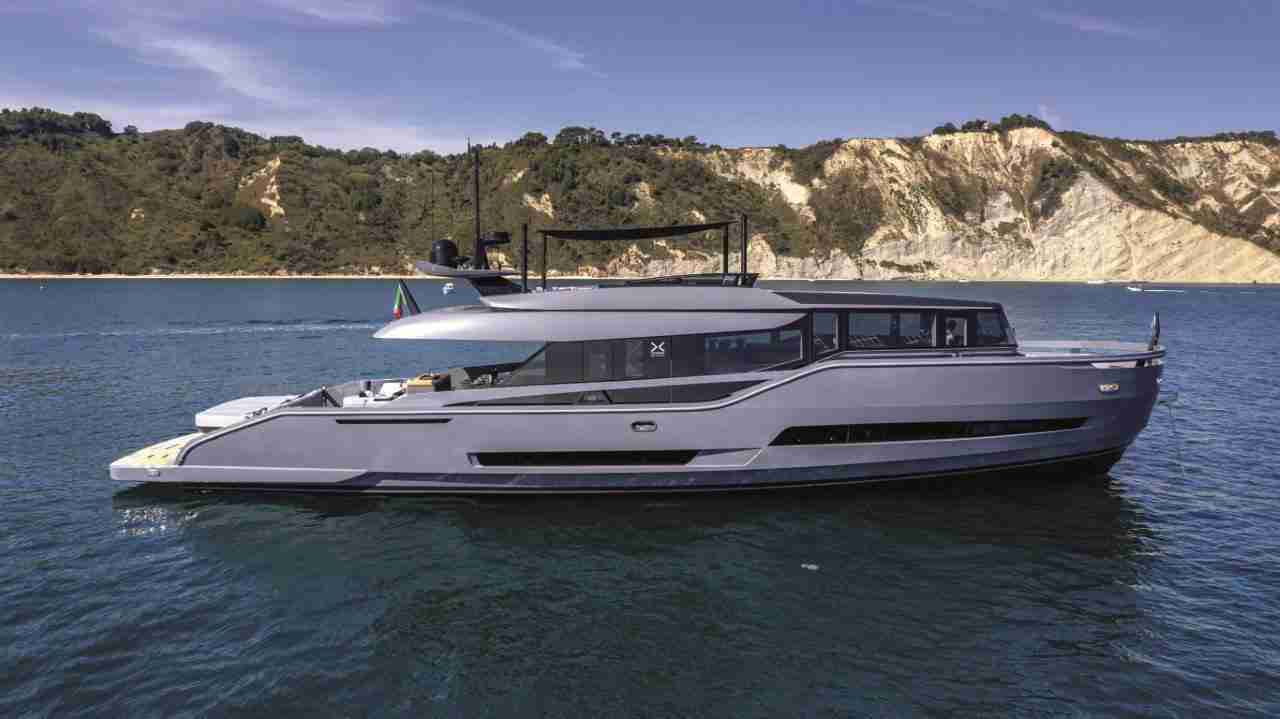 The idea was to create as much open space as possible, sacrificing traditional sleek looks in favour of something that could deliver more room for entertainment and enjoyment in an unobstructed area.

Haze¬†was done in a grey finish with large windows in the superstructure that give it an ultra-modern look. Extra Yachts eschews the notion of a sleek, sexy yacht in favour of something big, rounded and bold. 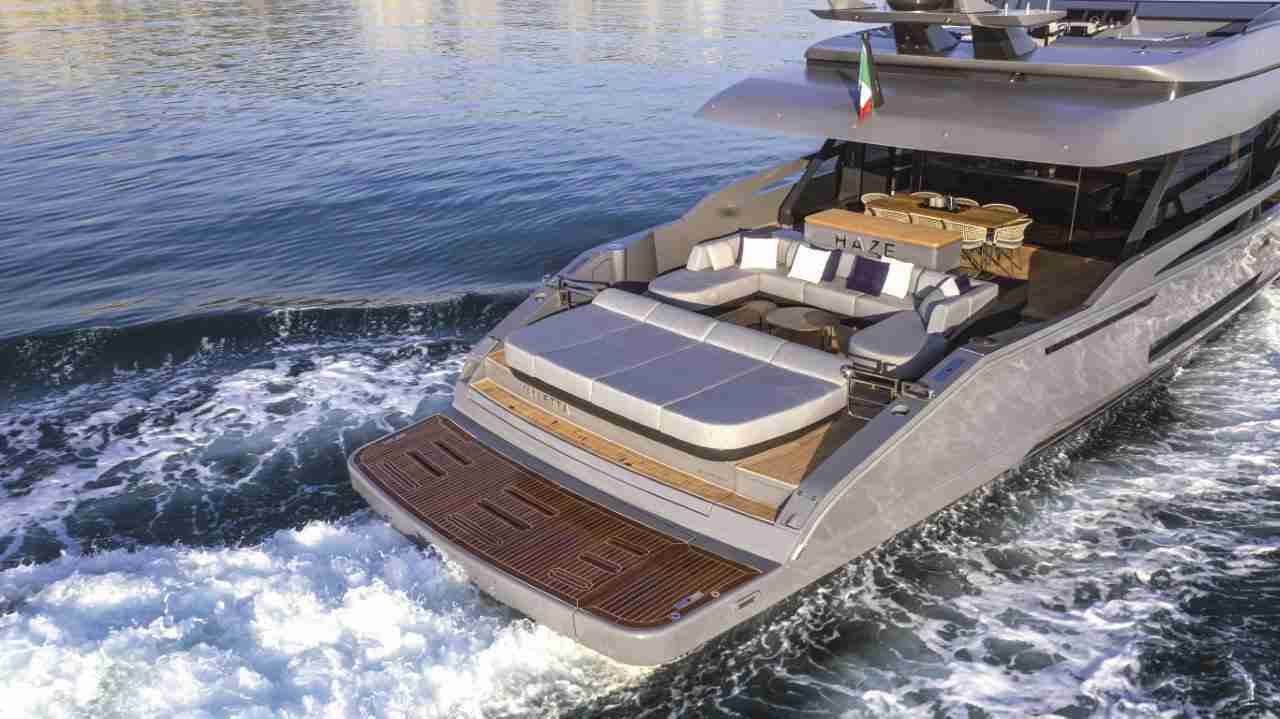 A huge bow area has been created from the wide-body hull to host an extensive entertainment area, with a sun pad and lounge seating that looks genuinely comfortable and like a decent place for a sundowner.

But the full width of¬†Haze¬†is put to best use on the flybridge and at the aft deck. At 25 square metres, the flybridge is enormous, with a centrally aligned helm station surrounded by large sun pads and seating. There is also a bar and barbecue area, and a loose canopy can be quickly erected over the flybridge deck, turning it into a tremendous place to relax over the water with expansive, uninterrupted views. 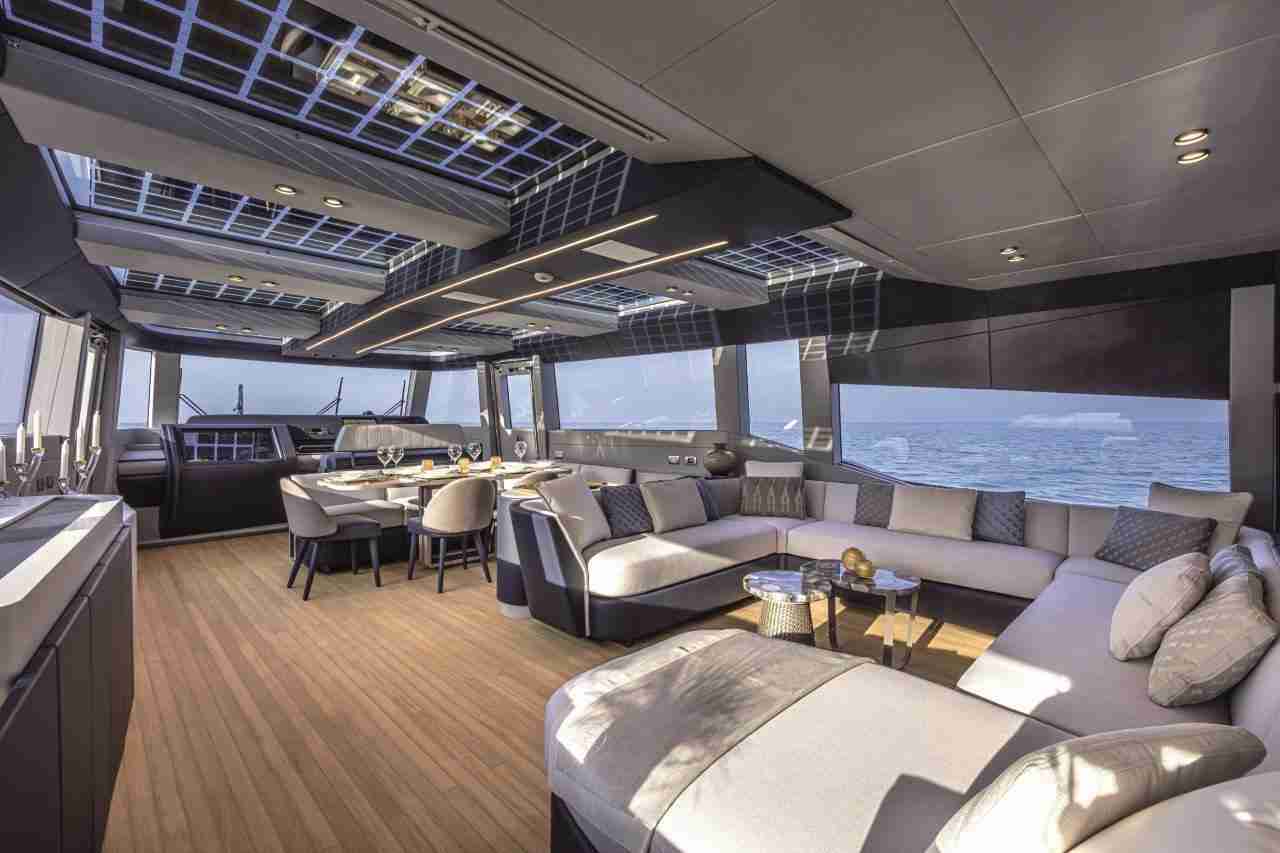 But the kicker is the aft deck and beach club, which has been kept open and made to feel like one continuous space. The cockpit/beach club covers over 50 square metres, affording guests close contact with the sea. The aft deck area extends over three levels, sloping down towards the water where the swim platform has a hydraulic mechanism that lowers it below the surface of the water. The starboard side portion of the swim platform stays still, creating a step-like structure into the water, which is a nice safety feature, particularly for less agile guests.

The very shallow set of steps takes the guest from the well-sheltered al fresco dining area to a giant, C-shaped settee with a low coffee table, large sun pads, and finally down to the water. The full beam of the yacht is used in each of these steps, giving it the ambience you would expect poolside at a luxury resort. Except the pool, in this case, happens to be the sea, wherever you drop anchor. 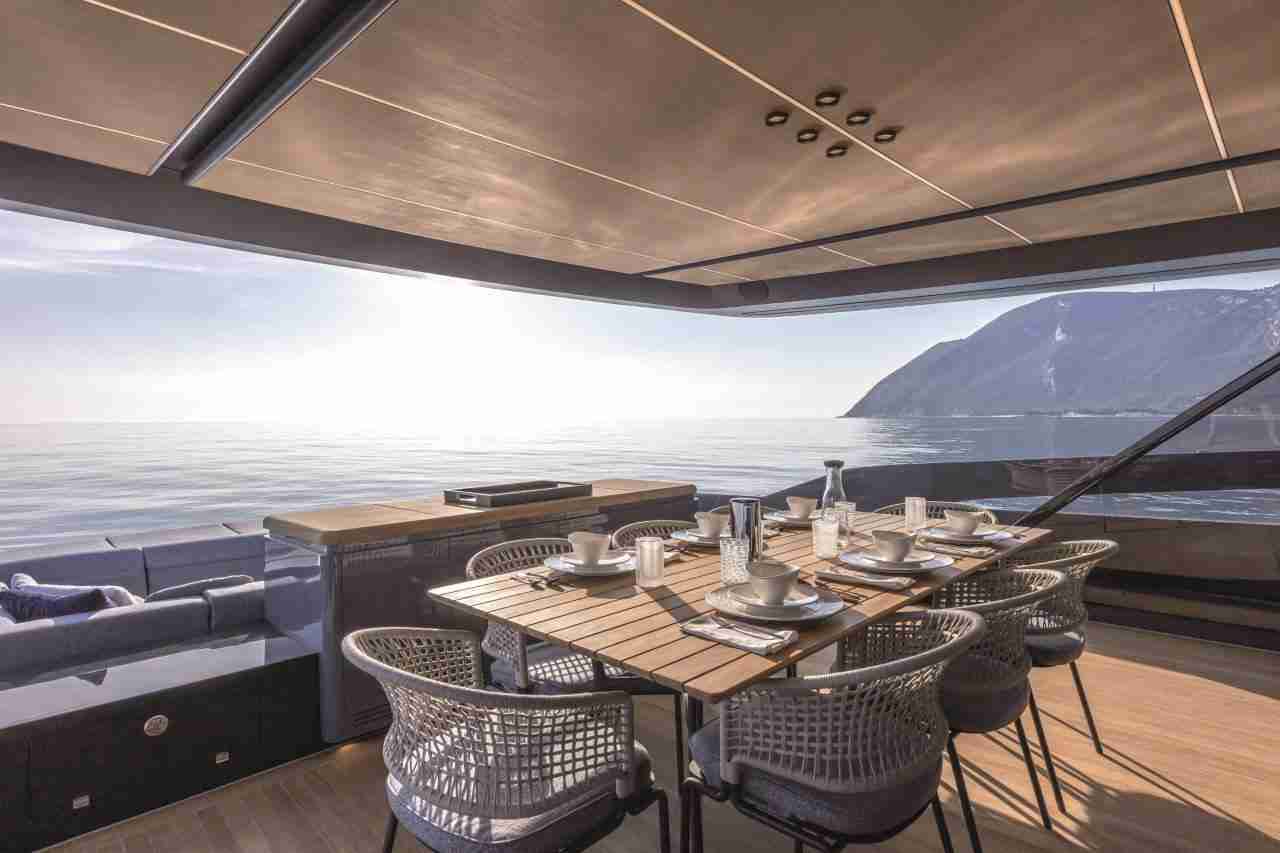 Like the flybridge, the aft deck/beach club can also be quickly covered with an awning. The length of this aft deck area, including the swim platform, is nearly half the boat’s overall length. The dining table has been kept relatively compact to allow for free, uncluttered movement between the different “levels” of the aft deck. On charters, guests will no doubt be spending most of their days on this glorious aft deck.

The yard says that¬†Haze¬†began with the interiors, working from the inside out to create the penthouse look that the owners demanded. The owner asked interior design firm Lawson Robb, famed for bespoke interiors on upscale London apartments, to find the yacht that suited the owner’s needs before designing the inside. 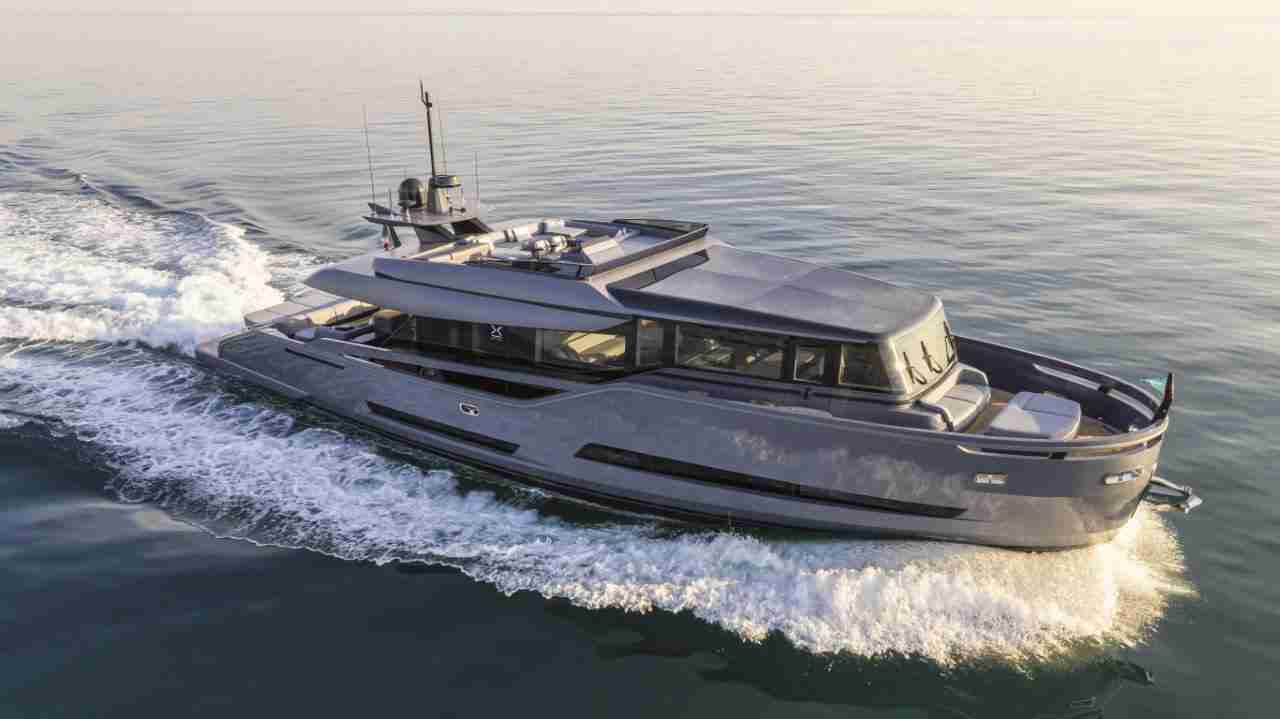 The interiors are brought to life thanks to the enormous windows and the skylights, which have solar PV cells built into the glass and generate about 5kW of power for onboard utilities. Extra Yachts describes the effect as that of being in a “large crystal dome”.

Beyond simply adding a lot of windows, the interior of¬†Haze¬†was designed to create as much space and roominess as possible, in part by moving the wheelhouse as far forward as possible. That has opened up a considerable amount of space for dining and lounging.

The full-beam main saloon has a C-shaped leather sofa, made-to-measure by Italian artisans, and a dining table for eight. The colour palette of the interiors mixes the blue and grey of the leather with lacquered woods to create the urban chic look the owner wanted. 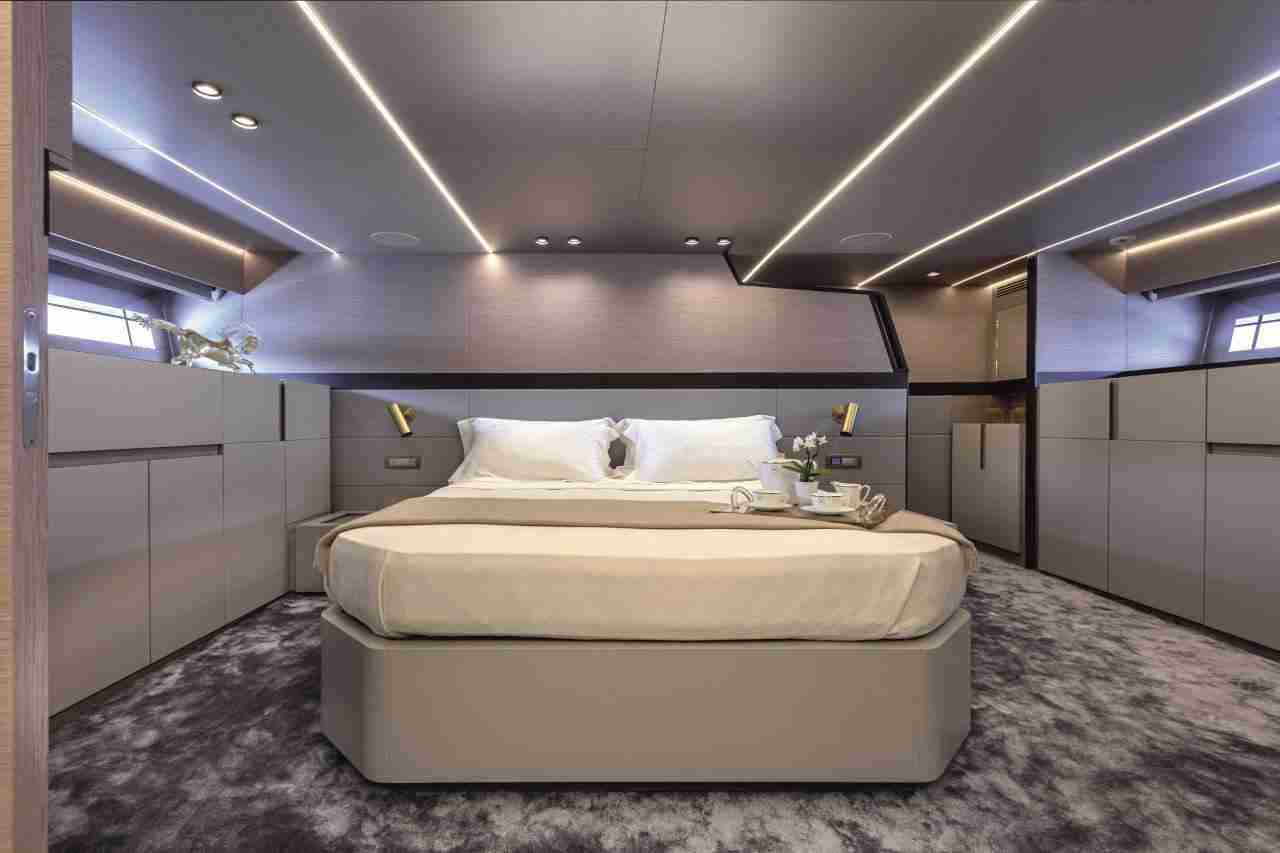 The galley has been located aft, just forward of the main door separating interior from aft deck. This lets food and drinks be served direct to guests in either space and turns the galley into a social area. In addition, the galley has been furnished with white marble, adding to the luxury feel.

Haze¬†has space for eight guests in four cabins, with a full-beam master suite, a large VIP and two double cabins. All cabins are ensuite. The master is full beam, while the VIP has been cleverly angled to maximise space, allowing for more walkaround room next to the bed. As a charter yacht,¬†Haze¬†will work particularly well for two families. 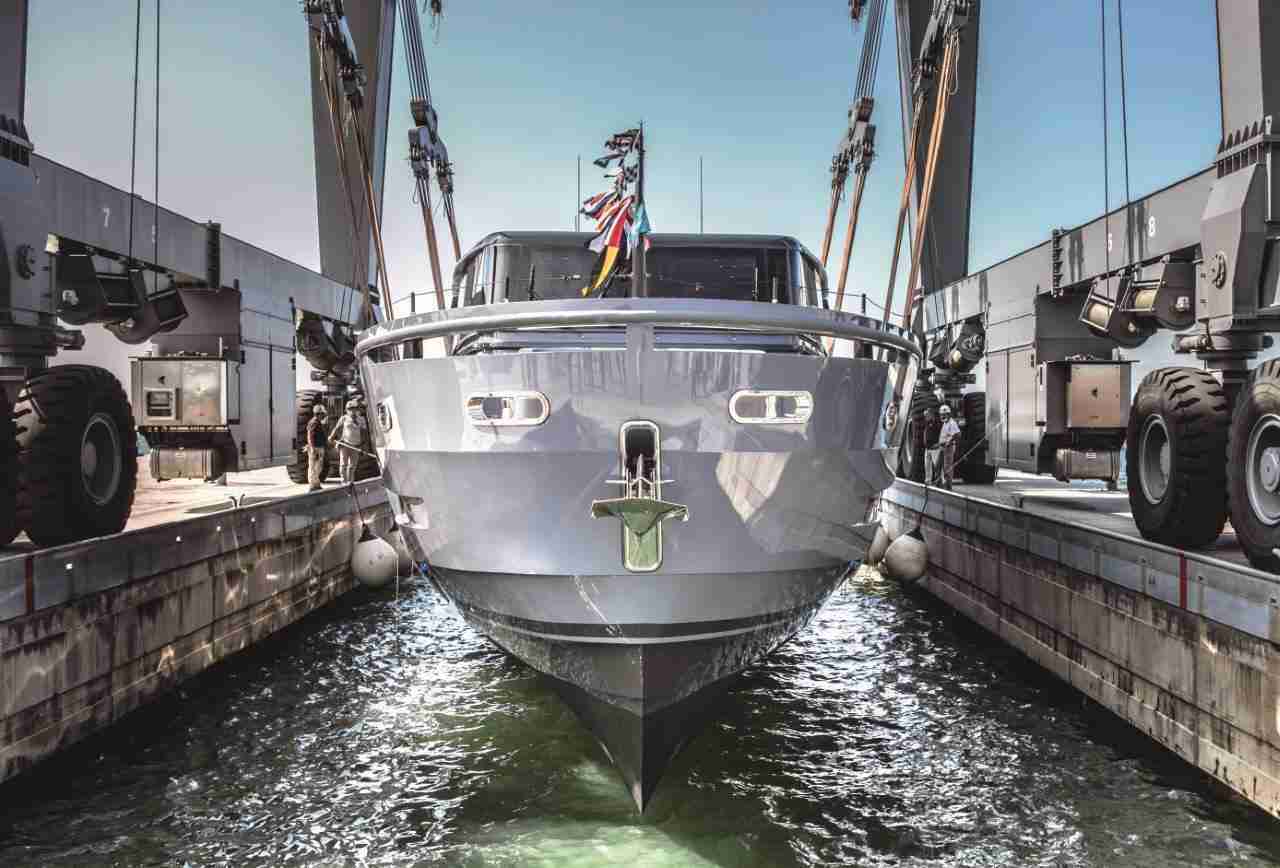 Haze¬†can reach a top speed of 21 knots on her twin Volvo IPS 1350 engines. In semi-displacement mode, the yacht can manage 1,200 nautical miles at her cruise speed of 12 knots. Given the way Haze is designed to take in fun and sun, it is unlikely that a charter party will want to travel that far, but it is good to know that the boat can be relocated economically.

In the standard version of the Extra 86, a 3.25-metre tender is housed under the stern sundeck and moved by means of a hydraulic crane. For¬†Haze, the owner chose a Williams 395, fitted on the stern swim platform. The crew can access their own area via a passageway in the bow, which further leaves the aft deck area to guests alone.