What started out as a vague idea for a custom sailing yacht for world cruising morphed into Baltic Yachts’ Canova, one of the most interesting examples of green-tech yachting on the ocean today 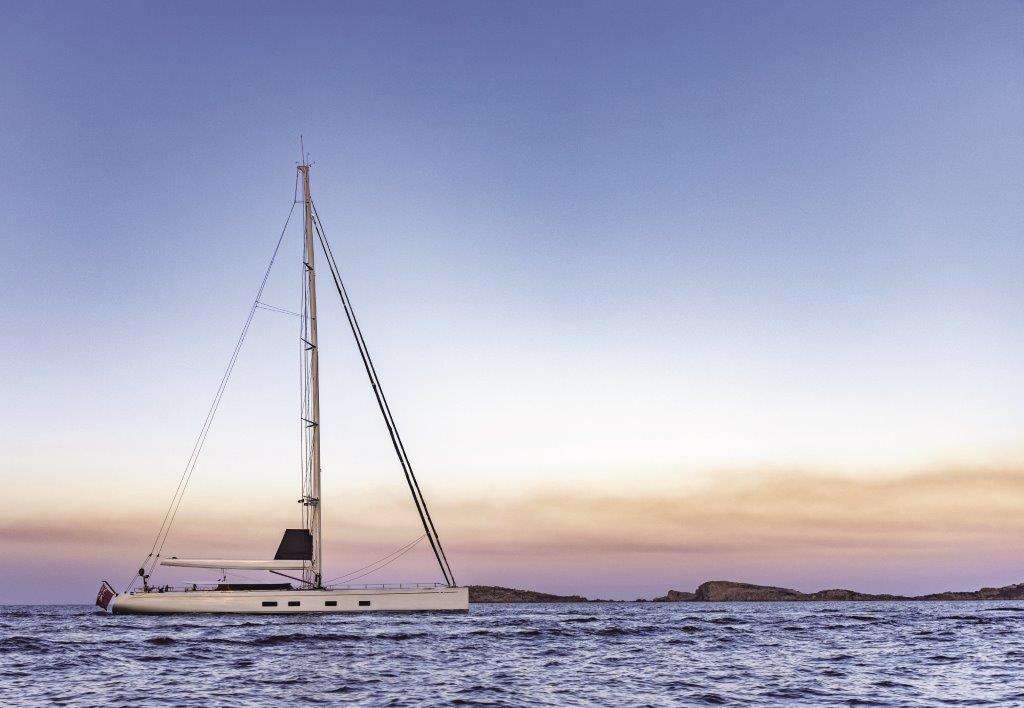 An Italian financier and keen sailor wanted a comfortable, long-range sailing superyacht that could run independently of shore support for extended periods. He went to Finnish custom yacht maker Baltic Yachts with a piece of paper and some general ideas. “Most buyers come with defined ideas and the general arrangements already from a naval architect,” recalls Henry Hawkins, executive vice president of Baltic Yachts.

In late 2019, after a design time of a year and a half plus build time, Dario Serge sailed away with Canova, one of the world’s best examples of a carbon-neutral, energy-independent sailing yacht with pioneering technology.

Hawkins told Asia-Pacific Boating that the owner, a repeat client, is passionate about long-range cruising. “This led him to wanting a boat that could spend a long time of the grid, just supporting itself. The impact on the environment became more important as the design process went on.”

The list of engineering feats aboard Canova is impressive. The custom seven-metre tender, stowed beneath the foredeck, was designed with built-in refuelling tanks for remote bunkering. The bow thrusters and other below-water elements were designed to be maintained without having to take Canova out of the water. 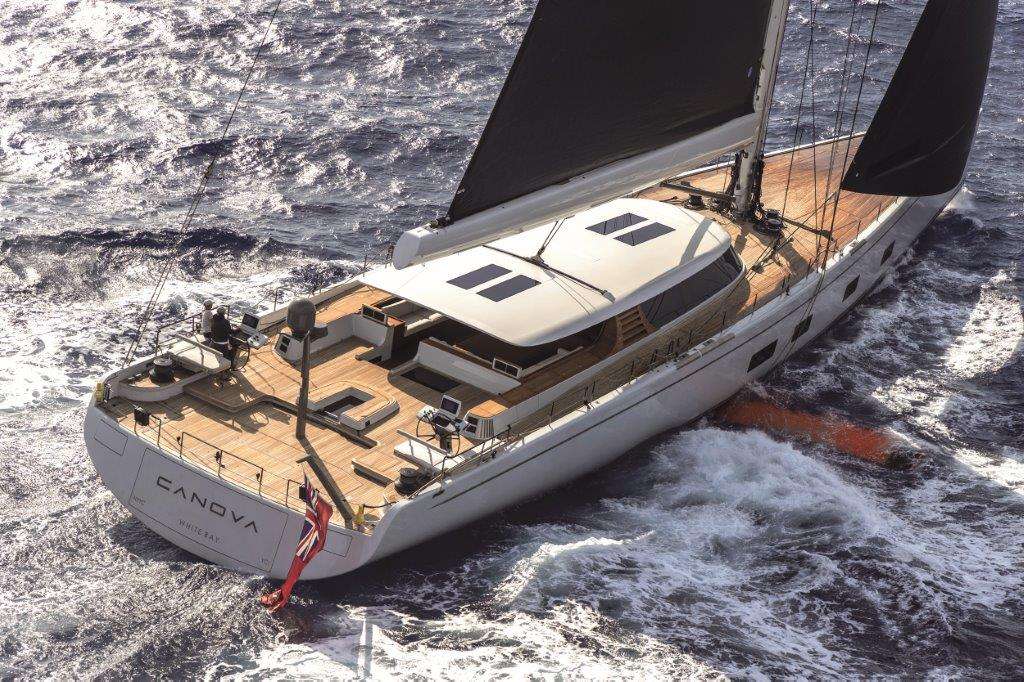 But perhaps the biggest innovation in Canova is the DSS – Dynamic Stability System – a nine-metre, single foiling wing that literally slides from one side of the boat to the other, providing righting moment for added stability and performance.

The DSS is the brainchild of Hugh Welbourn, a UK naval architect who cofounded Infiniti Yachts to promote the idea by incorporating the DSS into a series of yachts.

The problem was size. Infiniti’s largest yacht built so far is a 46-footer. “DSS had been done on smaller boats, but things don’t always scale up on yachts. DSS is not far from scalable, but things like where it fits on the boat had to be transplanted onto a large cruiser. The position has to be just right in terms of weight, force, centre of effort and so on,” said Hawkins. 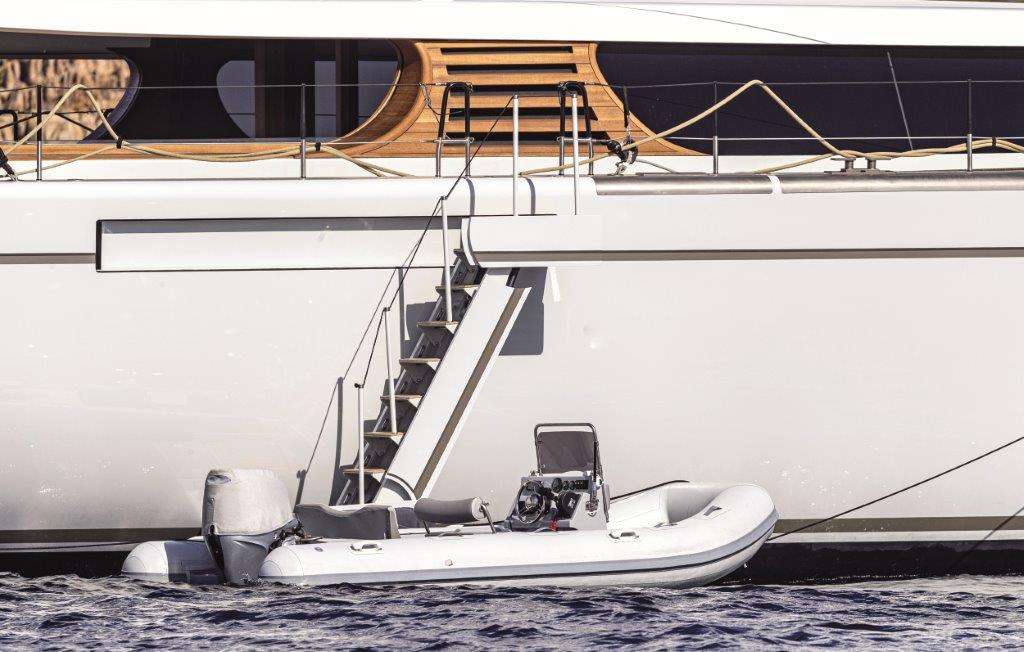 Canova’s tenders are stored aft and under the foredeck

The engineers and builders behind Canova’s DSS system – the largest of its kind – had major engineering challenges to work through. Building the system for a large cruising yacht meant there were issues around safety and reliability.

“We were adding two holes in the hull below the waterline. There’s a lot of questions there,” Hawkins said. 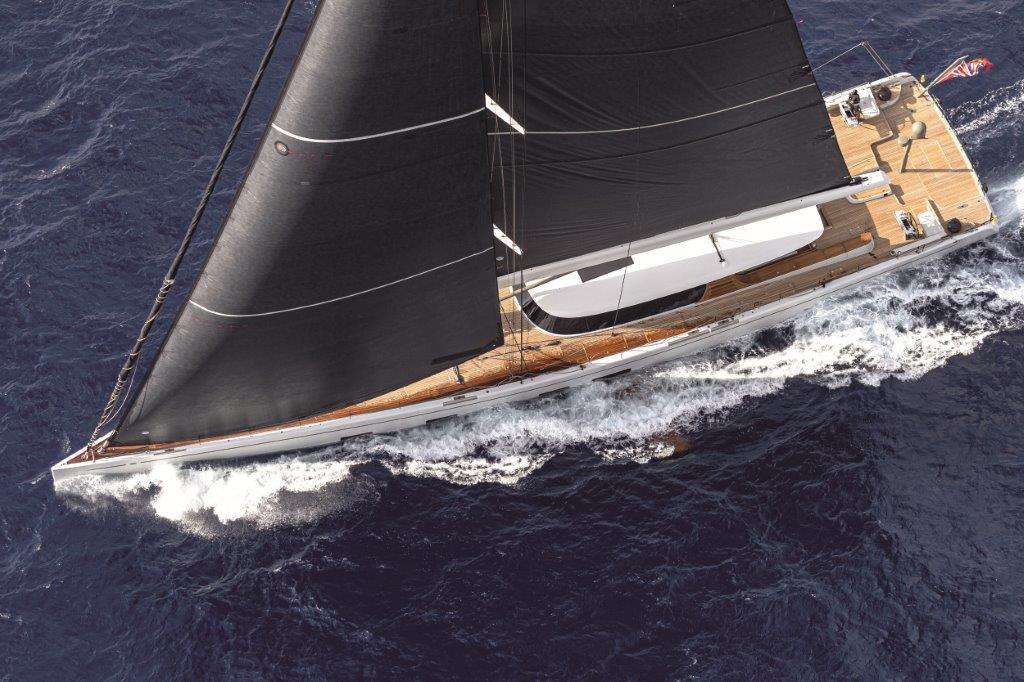 The loads generated by Canova’s foil are immense, plus there was the challenge of getting a single, wing-shaped appendage to slide through the yacht, underneath the master cabin. The system through which the wing moved had to be watertight and handle the 140-tonne loads it could impose on the hull structure.

In the end, a captive winch with a pulley system was designed to move the nine-metre appendage back and forth without having any protrusions other than the wing itself. Sea trial results showed that on a beam reach in 14 knots of true wind, heeling was reduced by over 30%. Upwind in 24 knots of wind, heeling was reduced by 28% and pitching by 40%. 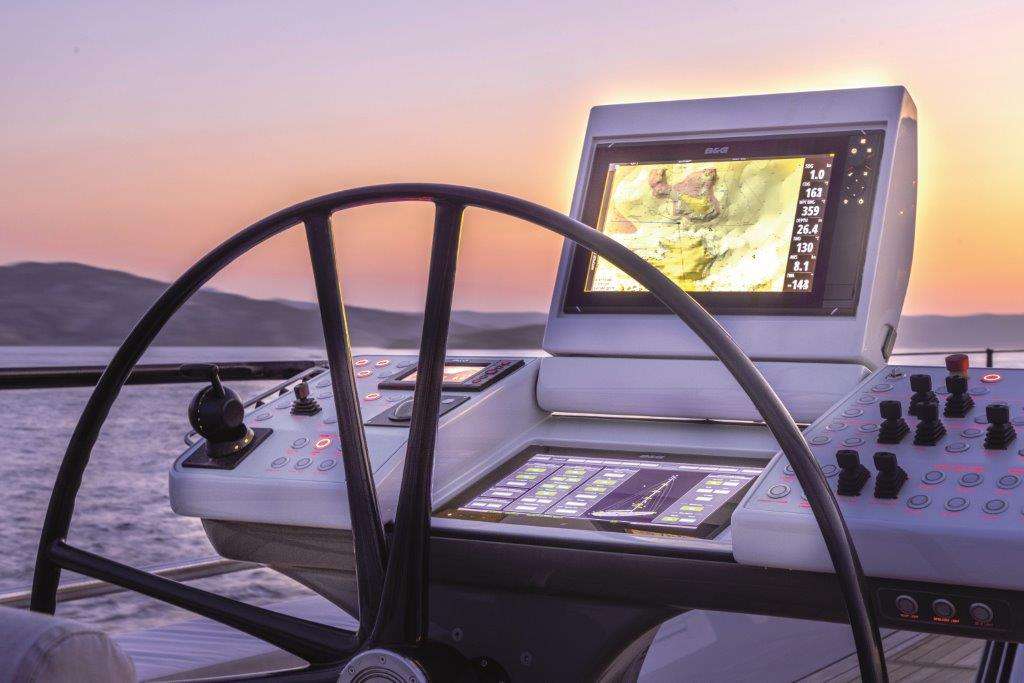 Canova is designed for short-handed sailing

Hawkins says that the idea of developing a DSS at this scale came from the owner himself as part of an open-ended discussion on how to make the yacht energy independent. The owner also wanted an amidships cabin, meaning the engine room had to be moved aft.

“We decided on an electric drive, which moves the engine room further aft – no need for shafts. Once we started down that road, then you start looking at the whole (electrical) system. It just snowballed from there – the company looked at where we could generate power, save power and electrify things,” Hawkins says.

The team decided to install a compact permanent magnet 420kW electric motor by Danfoss. The controllable pitch propeller is mounted on a Saildrive Propulsion System leg (SPS), which can be rotated through 340 degrees, eliminating the need for stern thrusters. 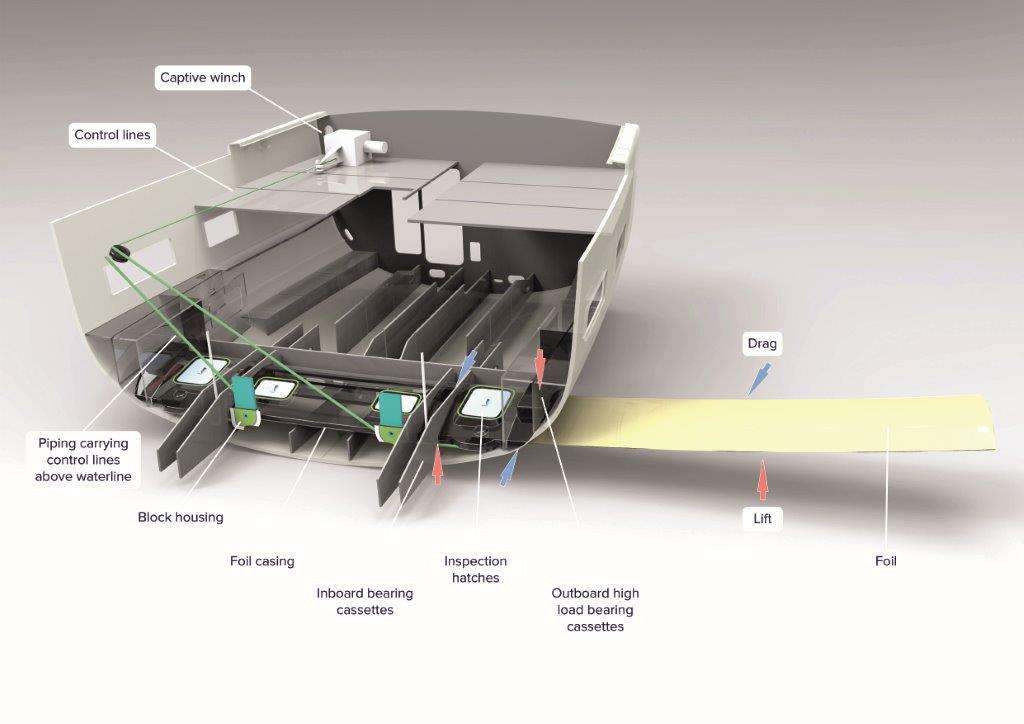 The discussion then turned to building a hydrogeneration system. While the yacht is sailing, her free-wheeling propeller drives the electric propulsion motor as a generator, which charges the large bank of Li-ion batteries. When sailing at 15 knots, the boat generates up to 20kW of power, enough to run the hotel systems.

Hawkins says that based on velocity prediction programme calculations, Canova should be able to reach speeds up to 28 knots under sail.

While the yacht is sailing, her free-wheeling propeller drives the electric propulsion motor as a generator, which charges the large bank of Li-ion batteries 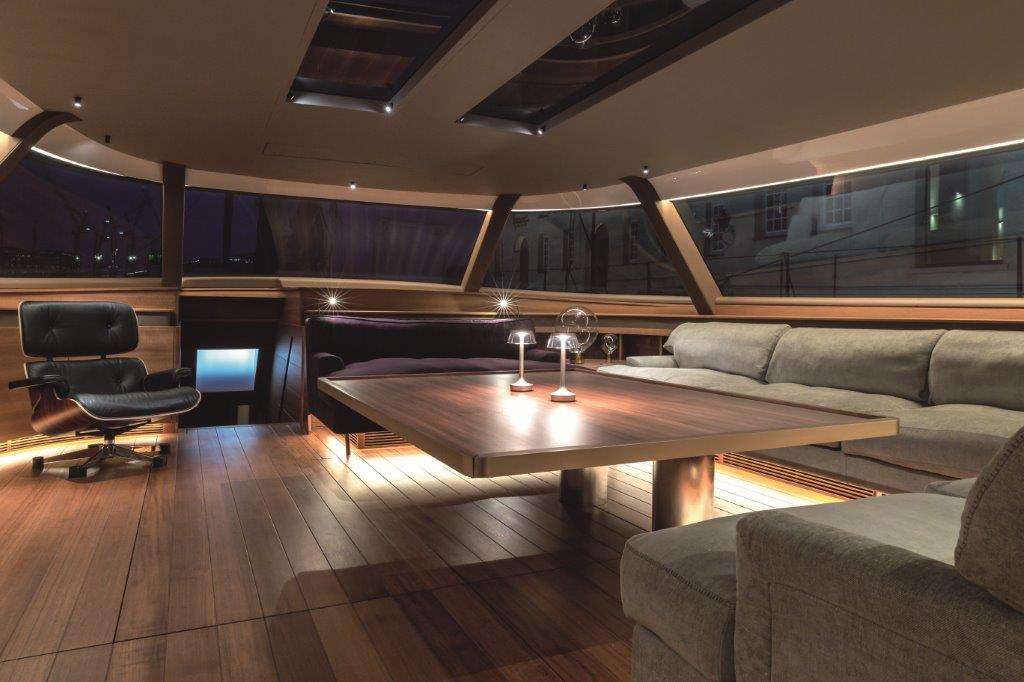 Canova has a unique sail plan with a square-topped mainsail. In addition to making the boat easy to sail with fewer people, the designers also added a large headsail with two sheeting clews, to allow for tighter control of the sail shape as the boat reaches higher apparent wind speeds.

Inside, Canova offers a kind of sleek warmth, thanks to modernistic teak styling by Milanese architect Lucio Micheletti. There is accommodation for six guests and eight crew, with a full-beam deck saloon adjoining the sheltered aft lounge area. The owner’s full-beam, 65-square metre suite is located amidships where there is the least motion. Four additional guests can be housed in two en suite cabins. Extensive crew accommodation for eight is located aft. There are also large freezers and coolers for longer voyages.

The yacht’s long, hardtop bimini, which covers the large guest cockpit, incorporates touch button drop-down side windows, sliding doors, dimmable glass and the ability to take the 24-tonne load of the mainsheet track. 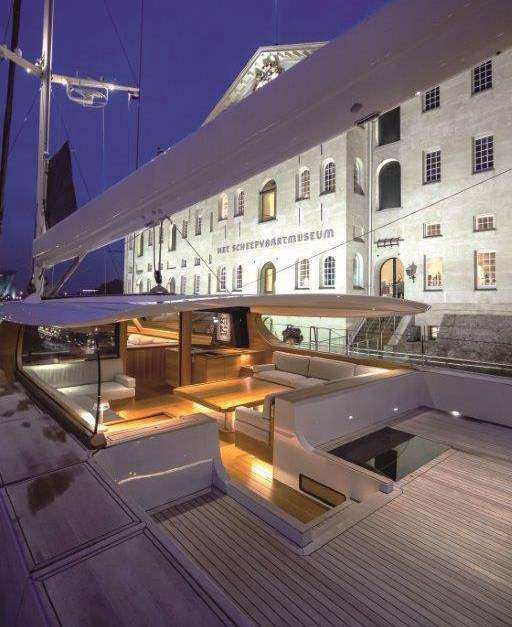 Sliding glass windows can open up or shelter the aft cockpit

The owner of Canova started out wanting a yacht that could sail the oceans independently, and it was this that led the builders of Canova down the green path. “We are all becoming more mindful of the need to be environmentally aware,” said Hawkins. “The owner fits into this. This guy is the first to put his head above the parapet and really go for green tech.”