Italian yacht builders are typically associated with sleek looks, opulent finishes, avant-garde styling and cruises around the Mediterranean’s yachting hot spots. With Cantiere delle Marche, based out of Ancona, Italy, you get stylish looks. But for over the past decade, the yard has focused on building good-looking yachts with explorer credentials.

As the yachting world continues its tilt toward adventure and long-range capability, it would seem the market has finally caught up to Cantiere delle Marche.

In 2020, the yard released the 40-metre Aurelia, the first in the yard’s new, Flexplorer series. For anyone interested in a modern way to explore the world in a compact superyacht, the Flexplorer is a very intriguing option.

With the A-crane tucked away, Aurelia’s guests enjoy a huge aft deck

First off, there is the 5,000-nautical mile ocean-crossing range on Aurelia. With lots of onboard volume and storage space, Aurelia’s owner will have little trouble spending long periods away from shore support. The extra-thick steel plating on the hull gives added protection.

But one of the biggest and most impressive features of the new Flexplorer is the addition of an A-frame crane to the enormous aft deck area. The A-frame crane folds down into the deck and is covered when not in use, creating a seamless deck space. The crane can deploy a tender weighing up to 2,500kg, which is the approximate weight of the Triton 660/2 submersible. It can also store and deploy a tender up to 8.5 metres, a size normally associated with a much bigger yacht. 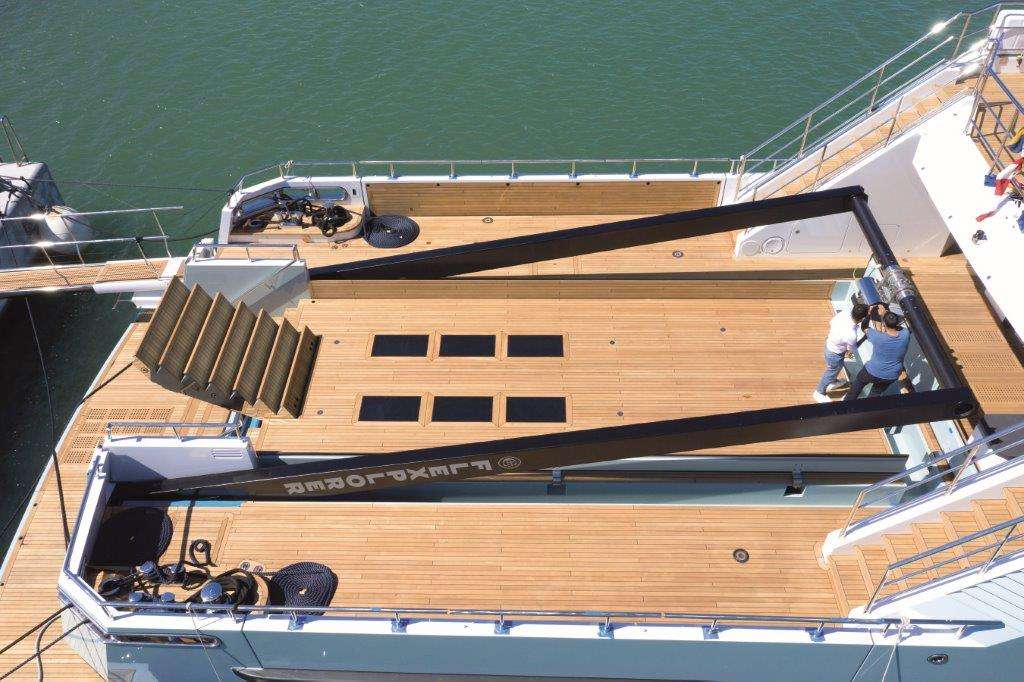 The A-crane being installed at the shipyard

This type of crane is also a safe way to deploy and retrieve a larger tender, as the weight shift is longitudinal, not over the side, which could make listing an issue, particularly in inclement weather. A-frame cranes are more commonly found on ocean research vessels that may need to operate in tougher conditions.

Once at anchor and with tenders deployed, the aft main deck’s bulwarks can drop down, creating an even larger space of up to 115 square metres.

Guests can use the clear aft deck for suntanning and lounging, but there are plenty of other surprises. A stainless-steel rack for surf and wakeboards pops up out of the deck. There is an additional 500kg carbon fibre crane that pops up. At the transom, a hydraulic swim platform drops down into the water, with wide, easy stairs letting guests enjoy easy access to the water in a way that feels connected to the main deck. When the toys are deployed, the main deck can even be used as a touch-and-go helipad.

Aurelia has a displacement hull shape with a bulbous bow. The hull is deep and flared forward, which keeps the deck dry and gives added stability in tough conditions. It also opens up a nice outdoor lounge area at the bow.

A special tunnel connects the crew quarters to the engine room, allowing easy access to the engineering spaces. The lower deck also has large storage compartments and freezers, making extended cruising away from shore support feasible.

In the owner’s cabin, located on the main deck forward, the engine noise is just 42db when the boat is running at 10 knots – about the same noise level as a quiet library

The interiors were designed by Francesco Paszkowski, whose yacht design work extends back to 1990 and includes projects for Sanlorenzo, Baglietto, Heesen, ISA Yachts, Custom Line and most recently, Cantiere delle Marche.

At the request of Aurelia’s owner, there is a large gym located beneath the main deck, with six skylights to give a feeling of airiness. A huge wine cellar spanning the main and upper deck was installed into the stairwell connecting the decks – exploration is a thirsty business!

The retro styling in the master cabin

Special insulation has been added to lower the noise from the operation of the engines. In the owner’s cabin, located on the main deck forward, the engine noise is just 42db when the boat is running at 10 knots – about the same noise level as a quiet library.

Aurelia is the first in the new Flexplorer series from Cantiere delle Marche, but given the range, style, options and engineering that has gone into this new series, it is likely not the last. Cantiere delle Marche offer the new Flexplorer in sizes ranging from 130 feet to 160 feet, and with her build in steel and aluminium, owners will have plenty of room for customisation. Let the expeditions begin!