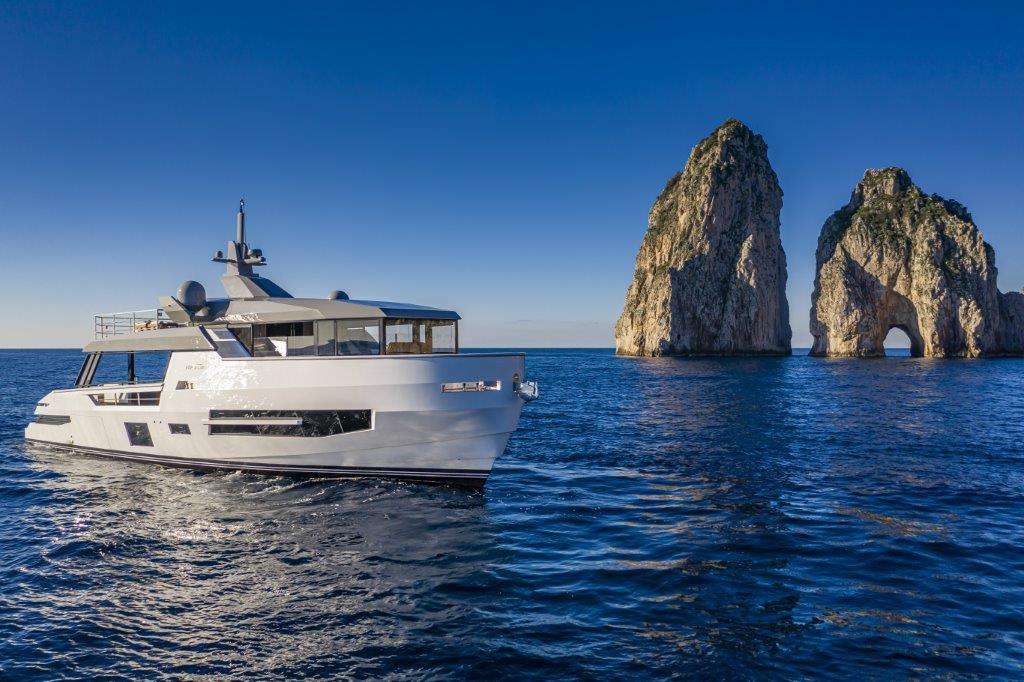 Arcadia Yachts made waves in 2016 when it first unveiled its Sherpa series – now regarded as a design classic – at Boot Dusseldorf. Four years later and the Napoli-based shipyard is building on its success with the Sherpa XL.

The second boat in the XL series was released in December, taking the boxy, working boat chic of the Sherpa and melding it into something quintessentially Mediterranean.

What’s lost at the snub-nosed bow is given back in spades at the stern where the indoors and the outdoors join seamlessly to create the kind of vibe normally reserved for a cool terrazzo attached to a villa in Umbria or Tuscany.

Shady, protected but with great visibility, the Sherpa takes the traditional layout of a motor yacht – numerous, small, separate areas – and transforms it into a single area in which the various functions connect with one another. 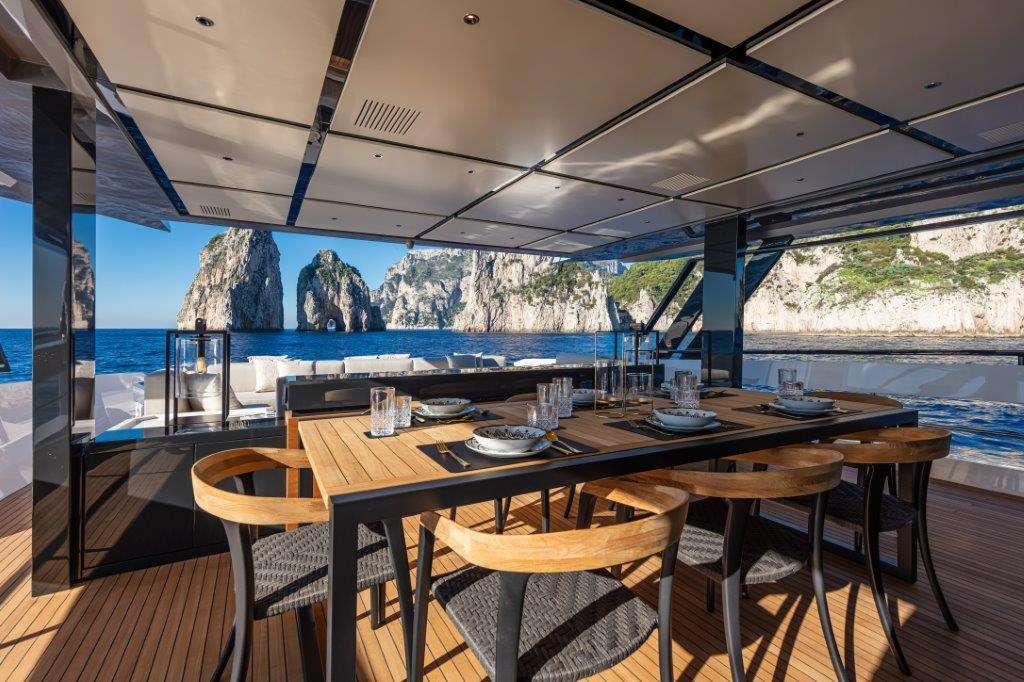 The deck areas merge together seamlessly

“We didn’t rest on our laurels after the success of the first Sherpa XL,” says Ugo Pellegrino, sole director at the Italian shipyard. “We listened to the suggestions of our owners and decided to work on various details, to make this new unit the perfect example of how Arcadia is always looking forward.

“This work led to the creation of a yacht that is perfect not just for owners who want to use it for day cruising … but also for people who want to experience a long cruise with very high levels of service,” he says. 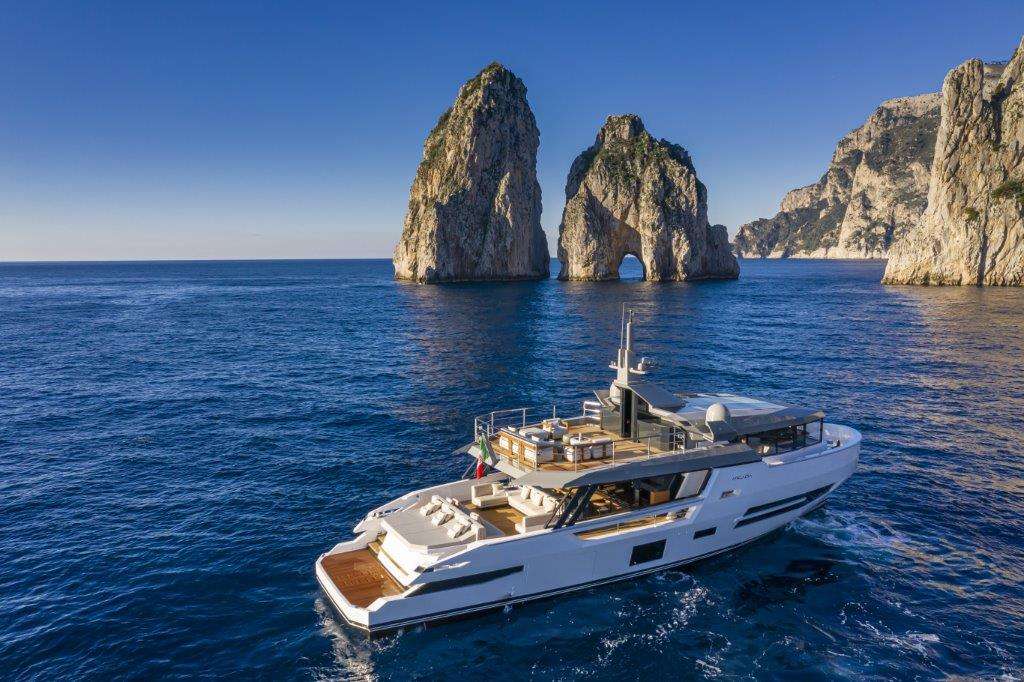 The Sherpa XL features a sundeck without a helm station

Arcadia itself has been behind the ‘slow yachting’ movement; the idea that it’s the journey and not the destination. Its Sherpa series has sustainability at top of mind and therefore won’t break any speed records port to port but, when it comes to cruising the Med, who needs to arrive anywhere windblown and flustered?

Knowing that its owners want a lot of guests and a languorous cruise, the Sherpa easily creates one of the most convivial spaces possible on a vessel of this size. Large open spaces – typical of every Arcadia model – is what it’s all about and every innovation is turned towards maximising this feeling. 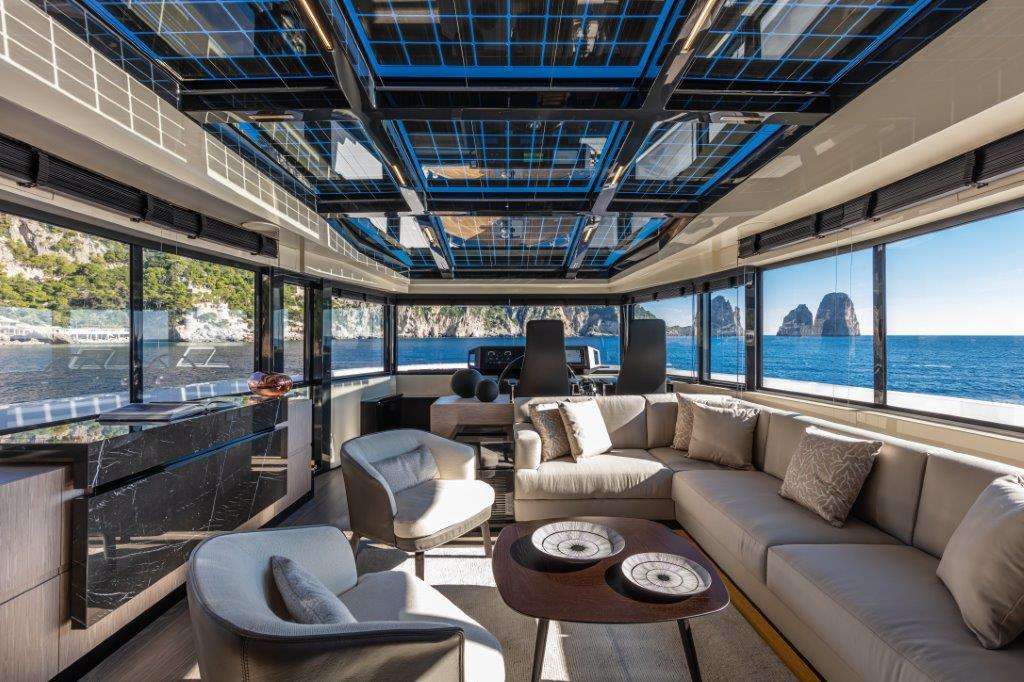 Arcadia pioneered the extensive use of glazing and glass elements, making the surrounding sea an integral part of the design

In collaboration with the Milan-based Hot Lab design firm, the shipyard has optimised this ‘open’ element to the extent that it features innovative glass panels that can be raised and lowered like the side windows of a car. The overall effect is to minimise the threshold between inside and outside such that it becomes imperceptible.

At the skylounge – where all this magic takes place –a simple touch of a button allows the windows to roll up or down to let the sea breeze enter. As the company says, “it’s the best air conditioning anyone could wish for”.

“The use of the ‘glass’ element is not limited just to the windows. It becomes an integral part of the interiors,” explains Enrico Lumini, Hot Lab’s Head of Design. So much so, that Arcadia is calling this glass section – which has the feel and flavour of a glasshouse – its jardin d’hiver. 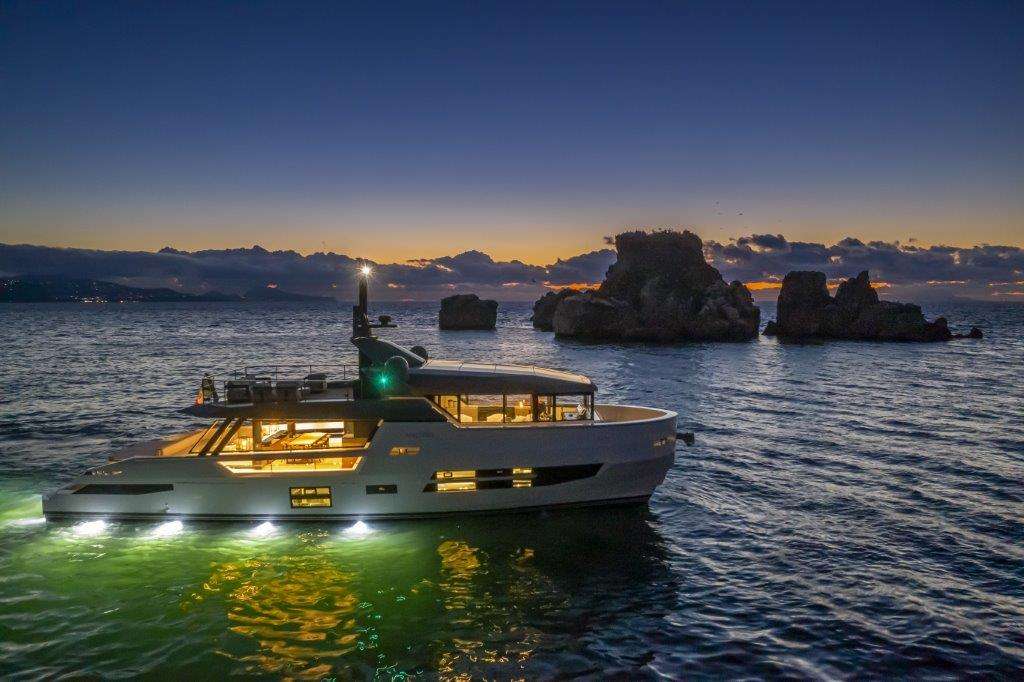 The Sherpa XL has 30sqm of solar panels generating 2.5kW of power

“The idea was to stress the different functions of the skylounge by inserting materials that did not obstruct the view. Take, for example, the glass walls that separate the jardin d’hiver from the wheelhouse: the depth of the visual field does not change, yet the flows of the crew and passengers can be separated when and if necessary.”

The presence of a blind system guarantees a further level of privacy.

Designers have also gone to great lengths to choose interior materials that go further in reflecting the sense of space. From colonial style oak parquet to furniture constructed in a pleasing Light Grey Alpi, everything has been chosen to give a feeling of lightness.

Taking tech and turning it into a design feature is also part of the Arcadia ethos. Its onboard jardin d’hiver has a roof that makes a feature of the vessel’s solar panels. 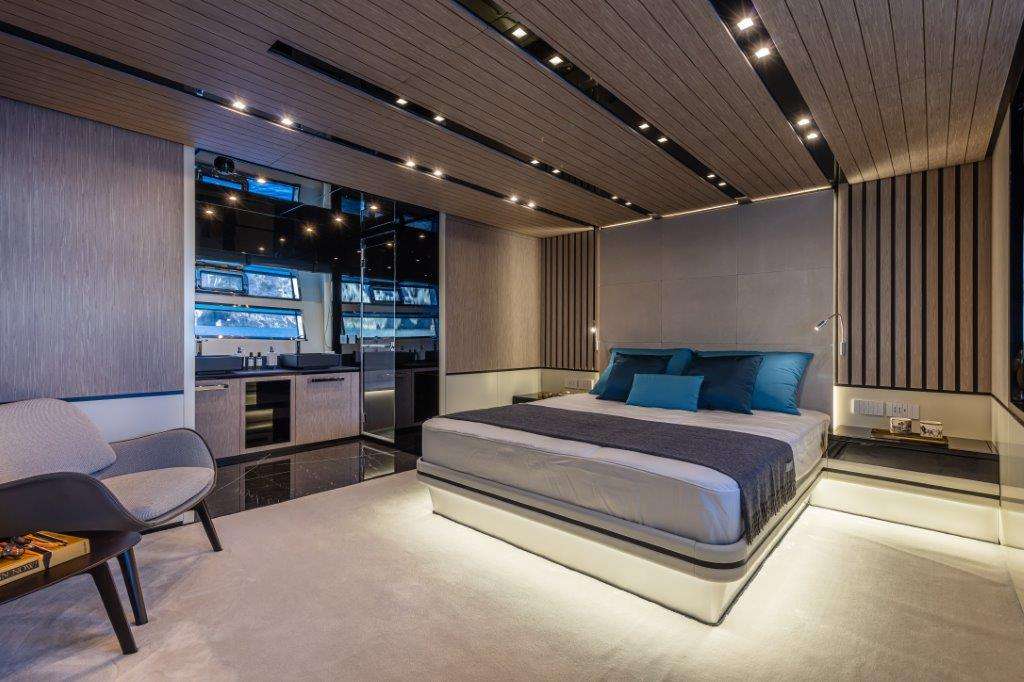 “Their presence allows for a reduction in generator use, so the sounds of nature can be better appreciated when at anchor,” Arcadia says. “The extensive use of cutting-edge glass panels with considerable thermal insulation is further proof of the shipyard’s commitment to its environmental principles.”

In terms of the lower deck, the master cabin merges seamlessly with the bathroom. There are no partitions. Owners can enjoy a space with a domestic touch – large, open and full of light – thanks to panoramic windows that extend down to the waterline.

There are also two guest cabins with twin beds, each with its own bathroom.

The amount of thought given to the crew area is impressive and makes much of its 7m beam. As well as a separate shower, the crew area has ample storage space in its numerous cupboards, under-bunk compartments and in its liftable staircase. 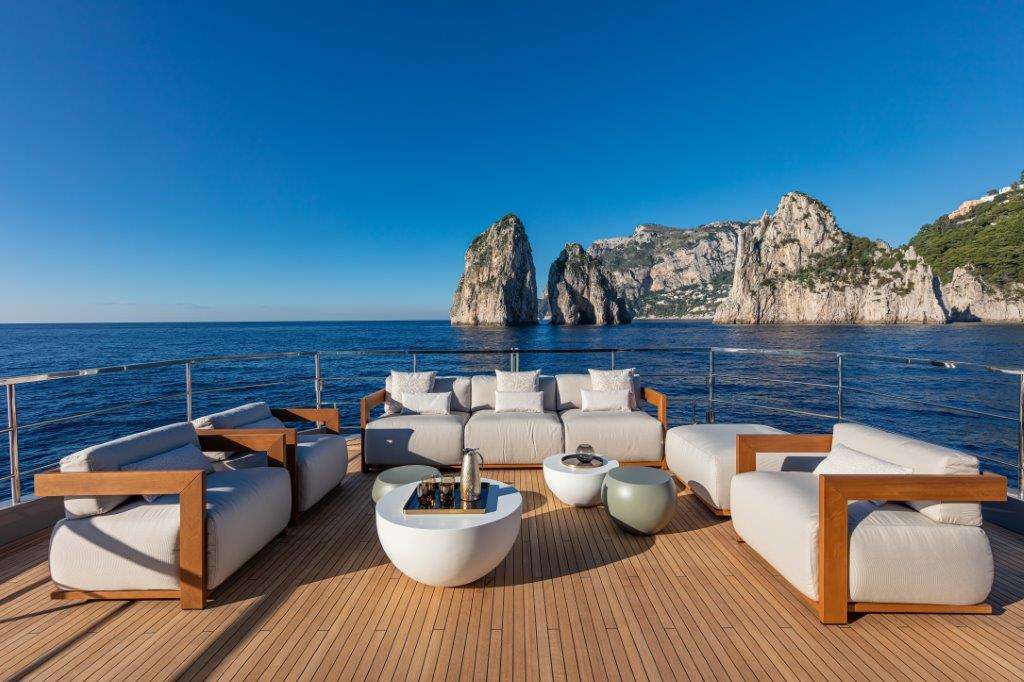 One great distinguishing feature of the Sherpa XL is a side garage forward of the engine room that is large enough to house a 4m tender. This means the platform can be used by the guests as soon as the yacht is at anchor, which is a considerable advantage in terms of elegance and comfort compared with other vessels in the 85-90 feet segment.

The transversal garage also acts as sound insulation between the engine room and the master cabin.

On the upper deck, the large sunlounge with bar area stresses the open-air philosophy of the Sherpa XL. Unlike traditional fly deck arrangements with a helm station, this area is dedicated entirely to guests and their privacy.

The regular shape of the sunlounge means that possible customisation requests from customers can also be satisfied with loose furniture.