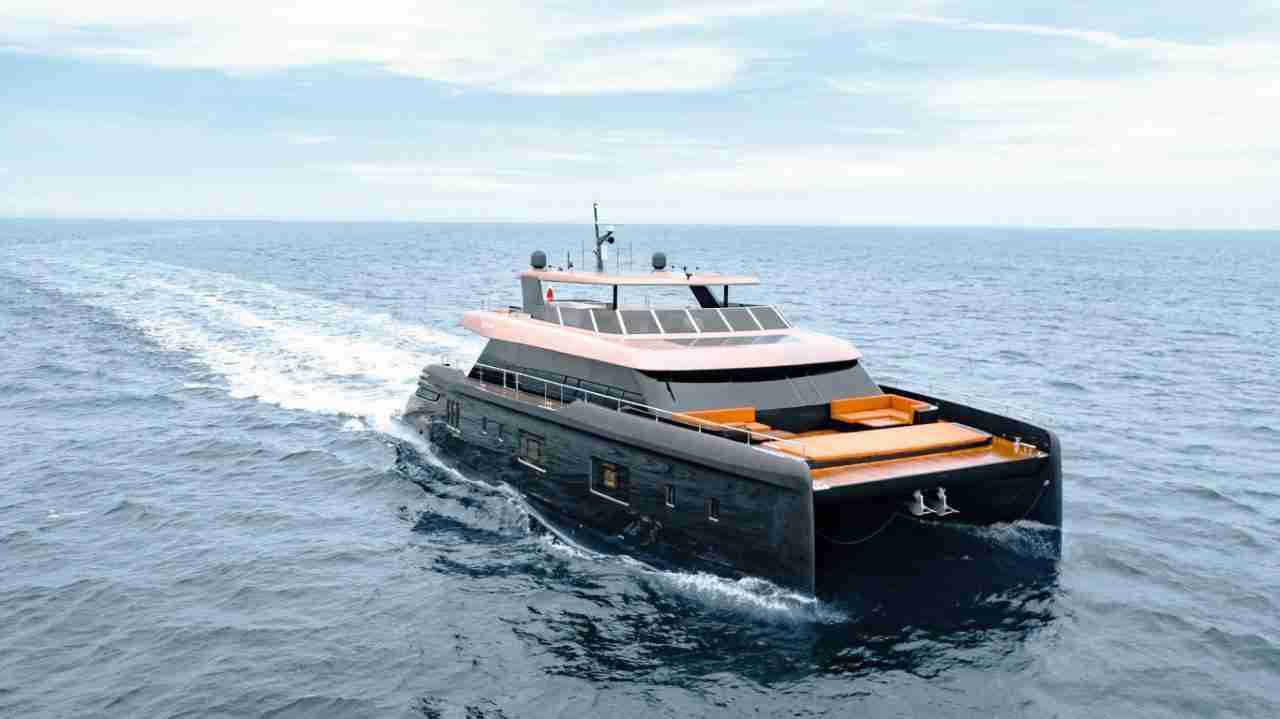 The Franco-Polish yacht builder Sunreef rose to prominence building sailing catamarans intended for cruising in the warm tropical waters of popular charter destinations, such as the Seychelles. Since then, Sunreef’s ambitions have grown exponentially. Under the watchful eye of founder Francis Lapp, a French businessman, Sunreef has built ever-more sophisticated yachts and has been busy building up expertise in low-carbon technologies.

At a press conference at the 2021 Cannes show, Lapp said Sunreef would be focusing more and more on superyachts. The new 100 Sunreef Power is a clear sign of that transition away from the mid-range segment. The 100, with hull number one launched last October, is a trans-Atlantic luxury yacht and the biggest motor yacht to emerge from the yard in Gdansk to date, although will soon be surpassed by the in-build flagship 49m Sunreef Power.

In keeping with Sunreef tradition, the 100 Sunreef Power is finished in bold colours, with the hull combining dark grey and rose gold. So much for the ‘white boat’ tradition.

Of course, the distinguishing feature of the catamaran vs the monohull is space. The massive beam of a catamaran creates the deck space one might find a monohull 20 or 30 per cent longer in length overall. Stability is another giant plus – the wide beam offers great lateral stability. Power cats began in the mid-range segment, but in the larger sizes, the onboard advantages come into their own – and the exterior profile is often sleeker and less boxy. Onboard, the cabins down in the hulls become more spacious and feel less cramped.

“I believe that catamarans have not been present enough on the superyacht market, but thanks to the 100 Sunreef Power project, their time has finally come,” says Agnieszka Blizniuk, yacht design director for Sunreef.

“I believe that catamarans have not been present enough on the superyacht market, but thanks to the 100 Sunreef Power project, their time has finally come”
– Agnieszka Blizniuk 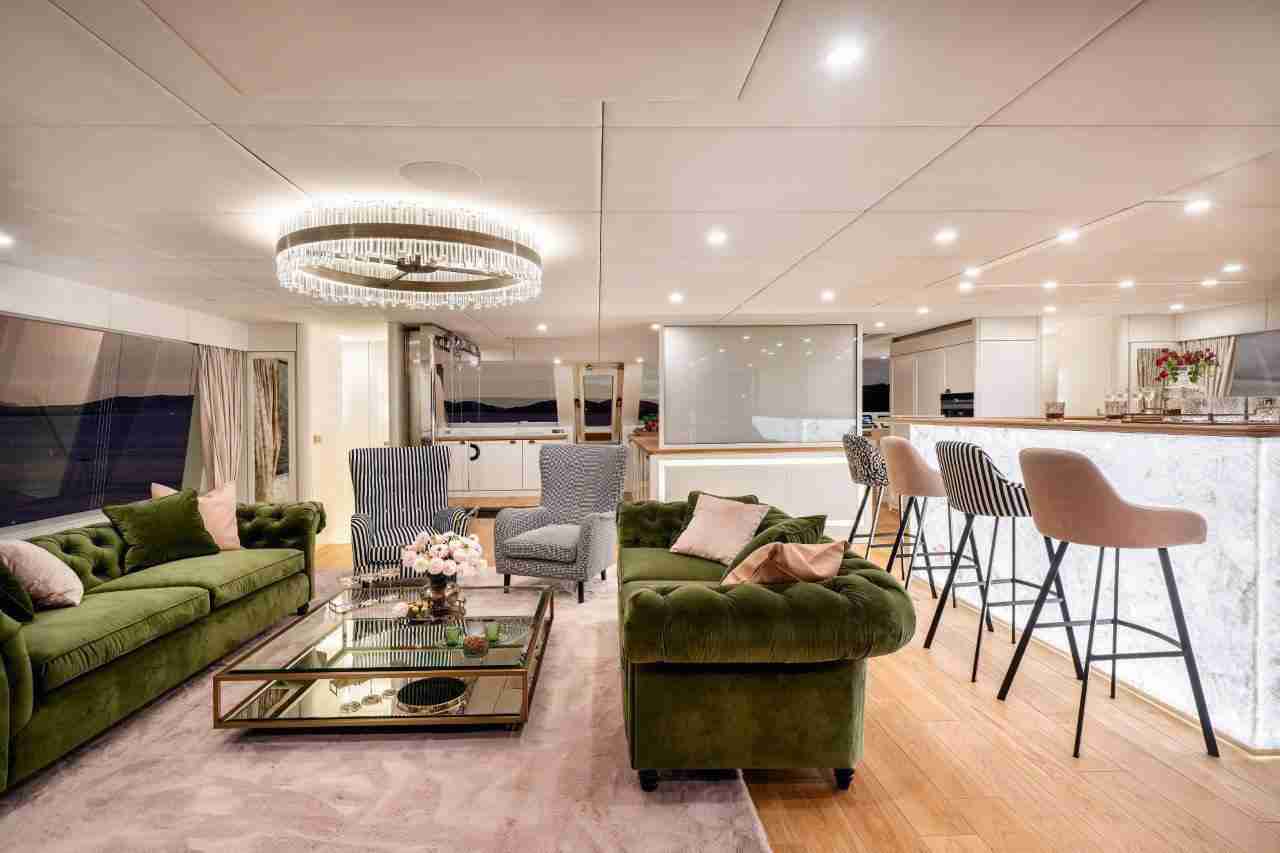 On the main deck, the new 100 offers enormous floor space that can be dedicated to pretty much anything an owner desires. The main deck saloon has a huge relaxation area, with a large lounge space to port and a drop-down, 55-inch TV. To starboard, there is a customised bar. On the forward part of the main deck, a galley offers restaurant-standard kitchen and service space, with access to a cold room below deck.

Despite the focus on drinking, dining and doing nothing in particular, the owner of the 100 also added a full gym on the main deck, with a view of the ocean and access to the terrace on the bow.

Forward on the bow area, Sunreef has used the vast space to create an enormous lounging area. Here, guests will feel the full benefit of a luxury catamaran. A sunpad spans the entire bow tip, while just forward of the accessway, there are coordinating lounge spaces with seating and a dedicated table – a perfect place to take in the sunrise with a cup of coffee, or a sunset with a nice drink. 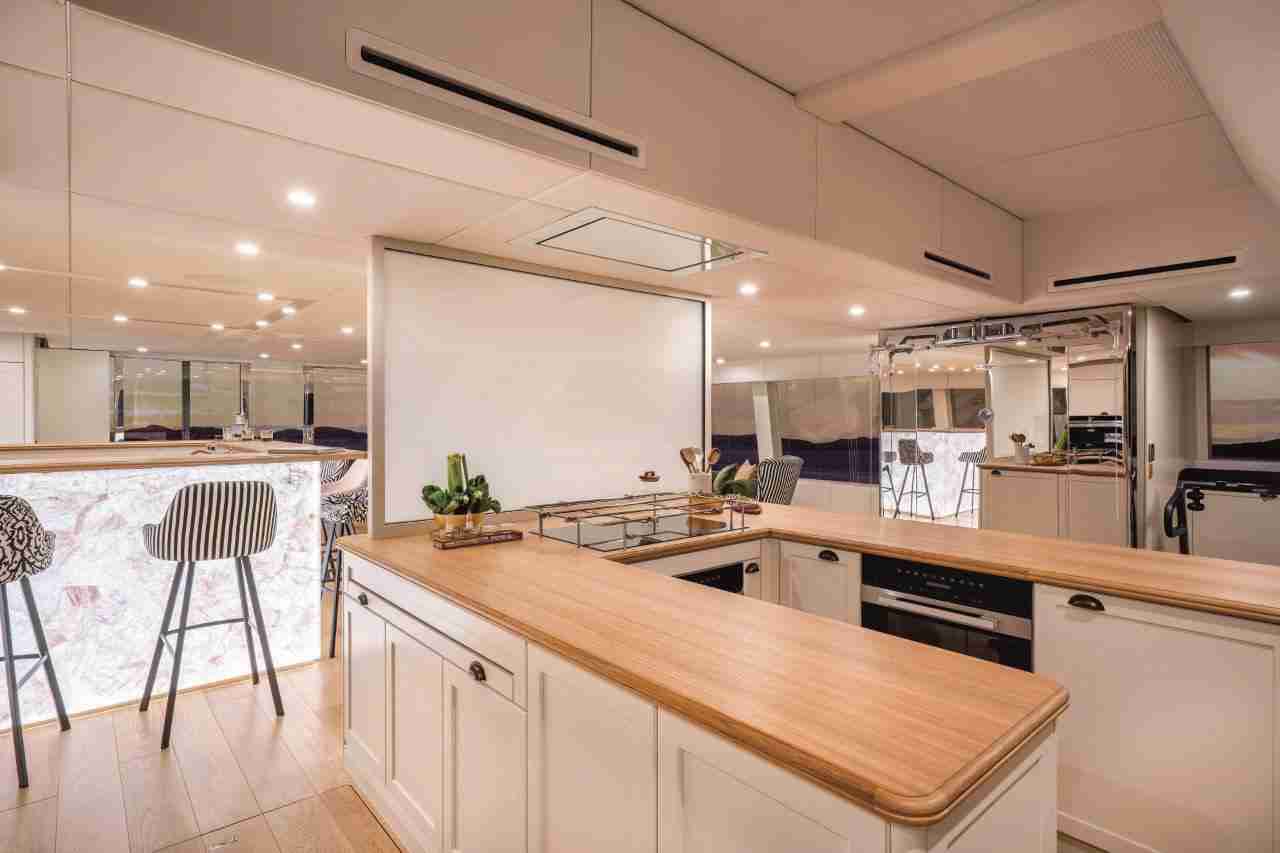 On the flybridge, power catamarans are in a class by themselves. While sailing catamarans enjoy the same benefits on the main deck, power cats get the entire flybridge for guest comfort, unencumbered by the need for a sailing rig. The flybridge of the 100 Sunreef Power has a bar and a large dining table. Guests can also take a plunge in the custom-built spa pool, which is surrounded on either side by large sunpads. The flybridge can be converted into an outdoor cinema with a high-end audio system, retractable projector and screen.

On the aft deck at the stern cockpit, the entire beam of 13.5 metres is used to create a huge area for socialising and entertaining. There is a dining space, wet bar and a day head. With the sliding doors open, the interior lounge and the cockpit merge into an expansive social space that you might expect on a monohull of 50 metres or more. 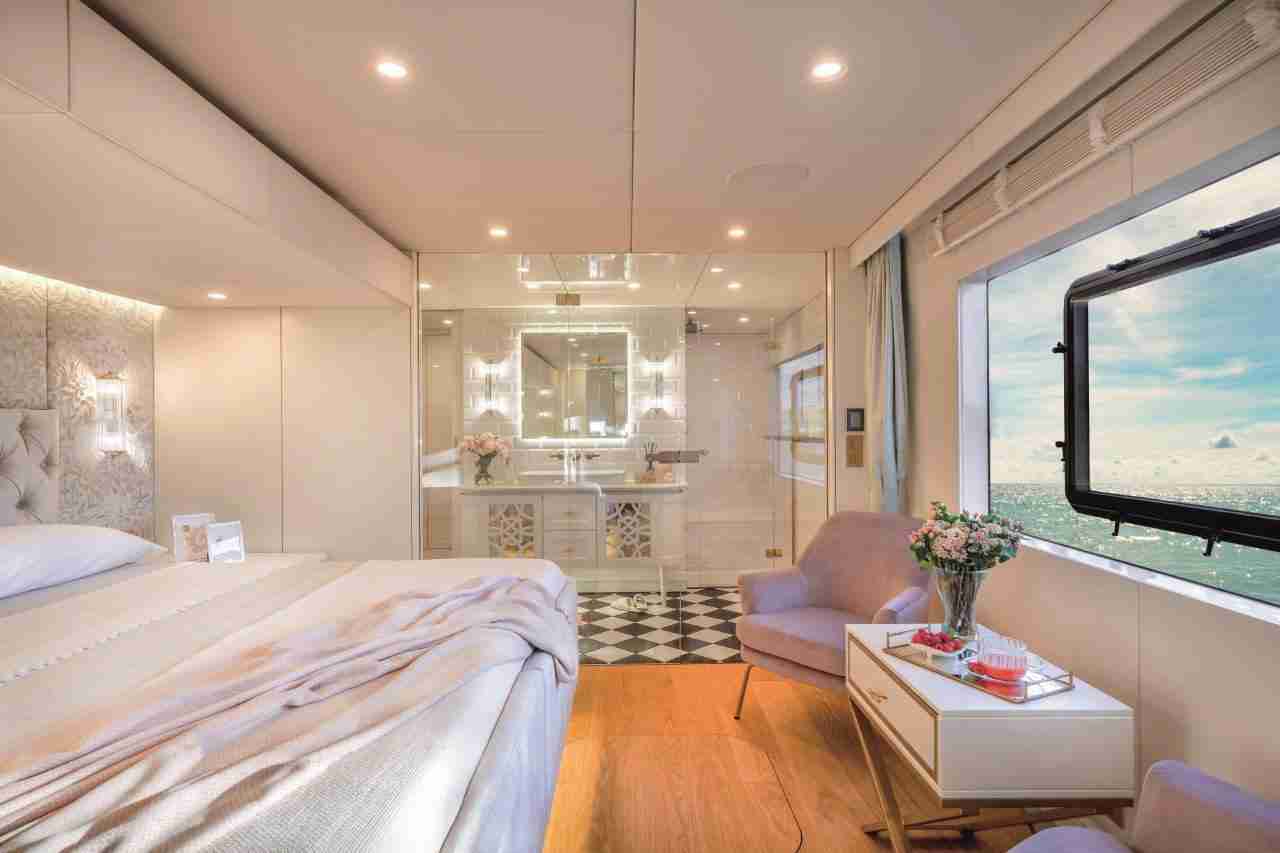 The cabins below decks are big enough to rival monohull cabins

The first 100 is a highly customised unit. The interiors feature a mix of colours and materials, including oak veneers, rose quartz and brass accents, with green furnishings. The design ethos is found throughout the yacht.

Hull number one features guest accommodation in five ensuite cabins. The master is located in the port hull and features a king-sized bed. It is spacious enough that one can walk around the bed as you would in a monohull yacht, and also get sea views from a large port window.

One of the suite’s stand-out features is the generous master bathroom with classic black-and-white tiling. The owner’s cabin neighbours one of the guest rooms, which offers a double bed, voluminous storage, an ensuite bathroom and a vanity table. The starboard hull houses three guest cabins providing the same level of comfort.

Despite the focus on drinking, dining and doing nothing in particular, the owner of the 100 also added a full gym on the main deck 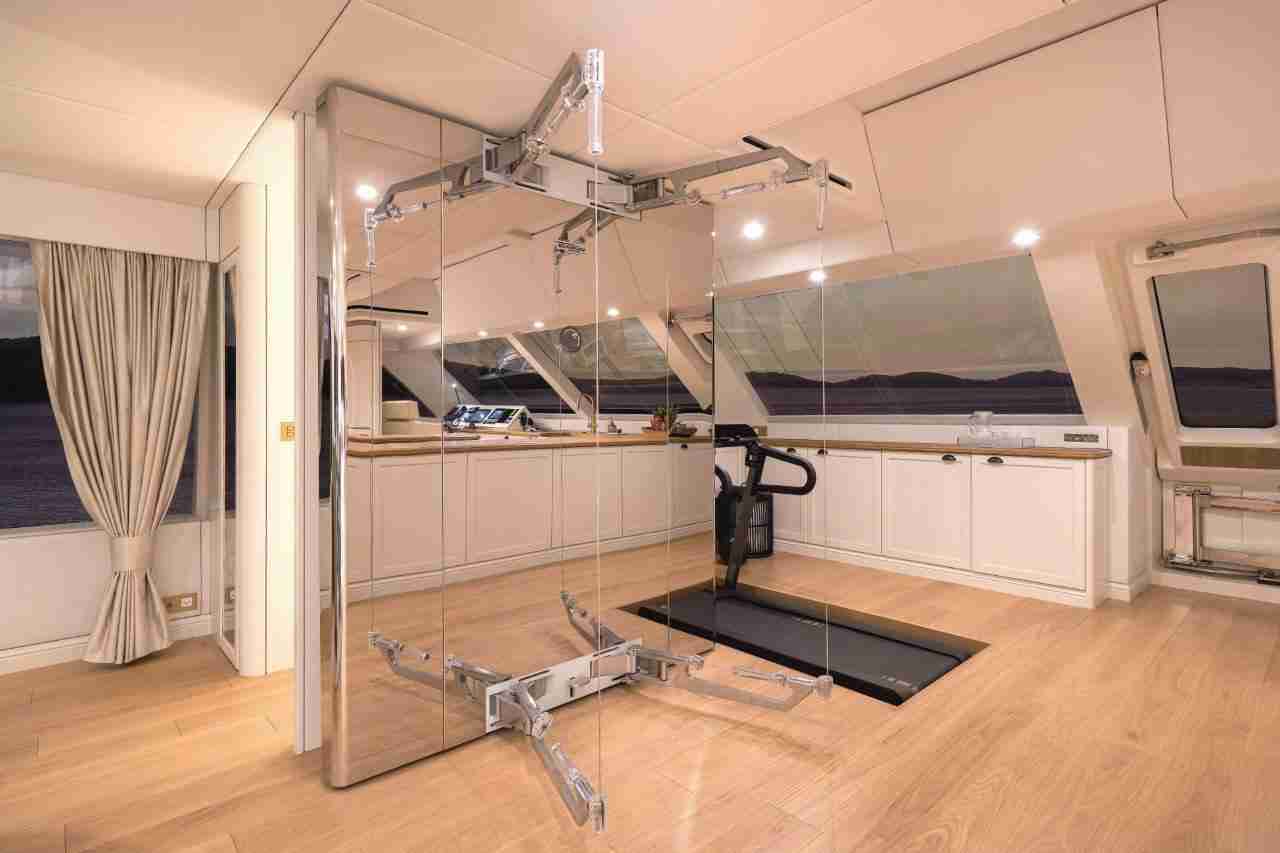 Sunreef also offers the 100 in a full-beam lower deck option, in which the lower deck cabins are part of the bridge deck spanning the hulls. With either option, guests and owner are likely to be very happy with their lot in life once onboard.

The shipyard has invested considerable time and effort into R&D aimed at making its yachts more energy-efficient, and that technology and investment is seeping into its newer yachts. That includes a dedicated R&D team working on patented technology in solar cell design, which Sunreef can now integrate into the fibreglass of its yachts. 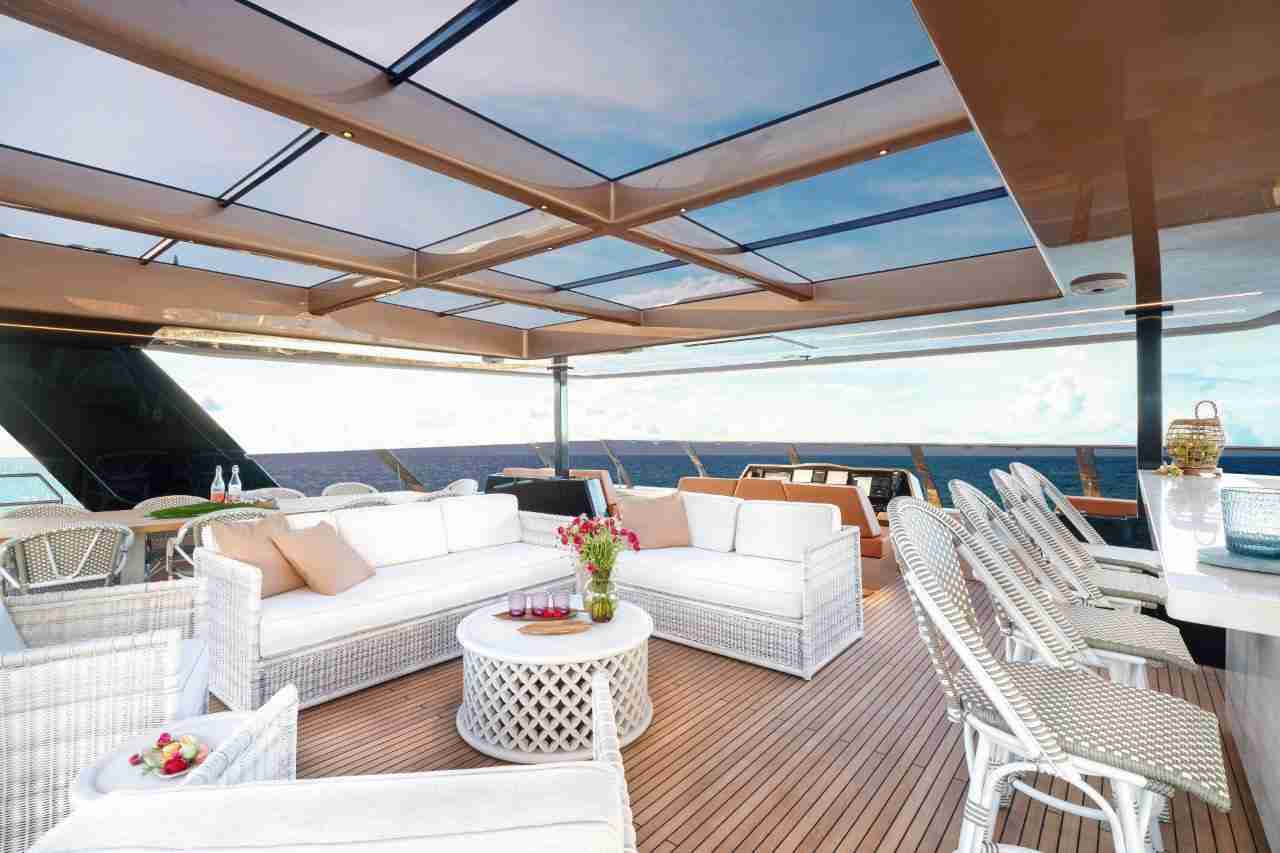 The expansive flybridge can be converted into an outdoor cinema

The new 100 features an air-conditioning system so efficient that it runs through the night without using generators. This means guests onboard can enjoy the night without the noise and vibration caused by generators powering the yacht’s so-called “hotel load”.

Once at anchor, everyone will want to jump into the water (unless cruising Norway is the plan!). The 100 uses a large hydraulic platform aft to lower a tender into the water and create a swim pad. But even better is the storage system for water toys that Sunreef has created. Forward of the hydraulic platform, a large garage is concealed in the bridge deck of the 100. A drop-down ramp deploys two three-seater jet skis. There is also a refuelling station for the tenders plus storage for more water toys. 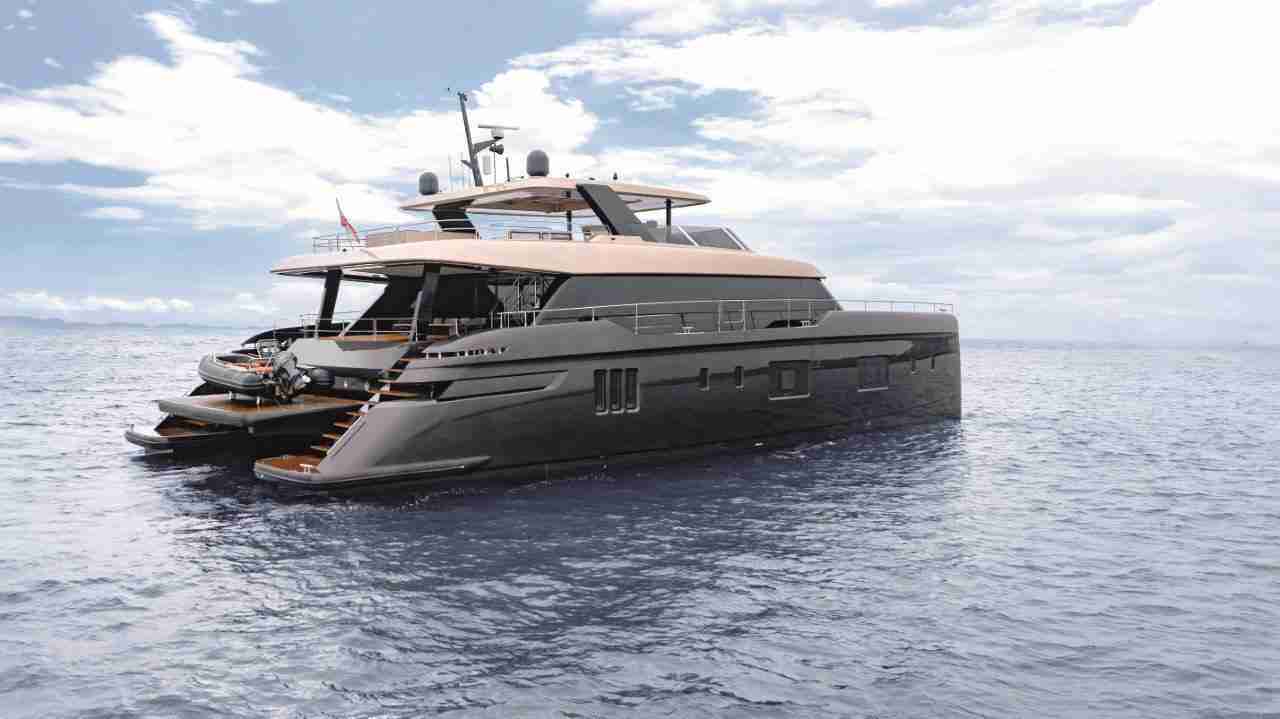 The crew get three cabins, one located aft, which could go to the captain, while two more are located in the bows. In short, the 100 is a proper superyacht, and Sunreef is expanding its production facilities to allow for more builds and bigger builds. The brand does its own naval architecture and design on the 100, and has presented numerous renderings and design offerings in yachts of up to 50 metres.

“Thanks to projects such as the 100 Sunreef Power, we are gaining ground on the monohull-dominated superyacht scene because today more and more owners realise that catamarans make fantastic luxury yachts,” says Francis Lapp. Given Lapp’s own investments in production and R&D, and the aggressive developments from other yacht builders trying to catch up, he is probably right.

The Ocean Alexander 35R has won rave reviews for its innovative layout and efficient performance. It...