Turkish shipyard Sirena Yachts has launched its flagship project, the Sirena 88, which is due to debut later this year at the Cannes Yachting Festival (September 10-15). The 26.81-metre project is the largest yacht ever built by the yard. 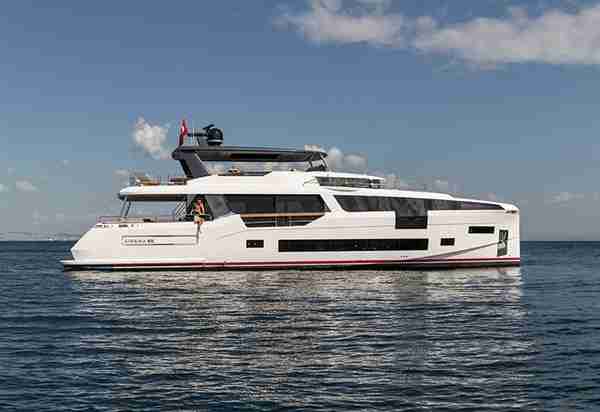 The hull features naval architecture by German Frers and the interior design is by Cor D Rover.

The Sirena 88 will have prodigious volume in a raised pilothouse design and will feature a five-stateroom layout with a main-deck master with panoramic views. The master suite will have a sitting area to port along with a foldout balcony. To starboard will be a combination desk and dressing table. Forward, the head features distinctive windows that curve into the overhead to serve as skylights, along with a walk-in double shower and private toilet compartment.

The comfortable layout belowdecks features an amidships VIP suite and forward luxury guest cabin with private head, and will have a pair of en suite double guest staterooms between. A full-beam crew area insulates the guest accommodations from the engine space, and provides up to four crew with a private sitting room and two cabins. 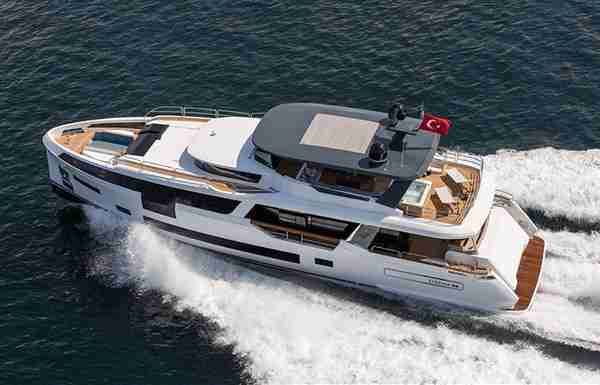 “The layout is something that we can change to meet a client’s needs,” says Tanil Surmeli, product manager for Sirena Yachts. “We are able to play dramatically with the spaces within the structural confines of this hull. As a semi-custom builder we are open to their ideas.”

The yacht’s raised pilothouse provides excellent sight-lines for navigation while taking the business of operating the yacht out of the main-deck areas to allow or a relaxing guest experience.

The main-deck social area will have a large formal dining table with seating for ten, served by a nearby galley.

Aft a seating with facing U-shaped and straight settees will be a gathering spot for guests, and opens through wide doors on the sheltered aft deck, where another dining area stretches across the transom. Down port and starboard stairs will be the swim platform, served by a striking beach club built into the transom. 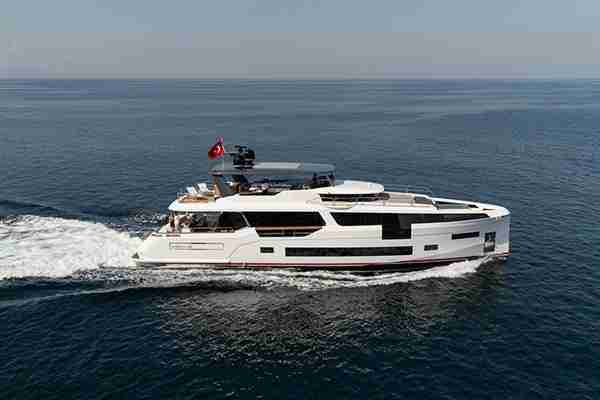 The flybridge will be a social space on its own, where the upper helm is located forward to starboard. A bar will serve yet another formal dining table while aft groupings of settees will surround large cocktail tables. A whirlpool spa tub will be nearby to help guests relax even more.

The foredeck social area will be protected from wind and ensure privacy with high bulwarks, while a dipping pool will be flanked by sunpad lounge areas to either side.

Its advanced naval architecture by German Frers is enhanced by high-tech resin infusion construction and generous use of carbon fibre to reduce weight and optimise the vertical and longitudinal centres of gravity. The Sirena 88 will perform at both planing and displacement speeds comfortably and economically. The Sirena 88 is expected to have a range of 2,400 nautical miles at 9 knots.

“I would like to express my gratitude to all the members of the Sirena family and designers who have contributed to our achievement”, comments Ipek Kirac, CEO of Sirena Marine during the ceremony. “This bigger model means we now play in a new category and I’m sure we are now ready for this. Over 400 boats (to date 410th) that we have produced so far are now cruising all over the world [to huge acclaim]”.