Solar-powered catamarans are quickly becoming a major topic of interest, as designs are leaping out from yards around the world. One of the more interesting projects is emerging from a small yard in Bali, Indonesia, where a 13.25-metre, all-solar powered catamaran, the Solar Eclipse, was launched on May 9.

Built by Singapore-based Azura Marine, Solar Eclipse is the first in the Aquamina 40 series, which will enjoy unlimited range on its solar cells, with no need for plugging in. 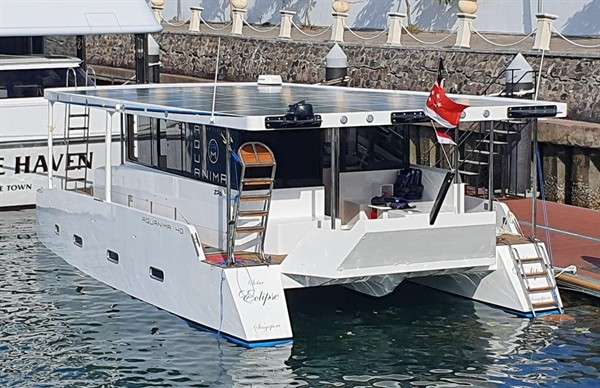 “Our heart and soul are in pure, solar-powered yachting,” says Simon Turner, a long-time veteran of the Asian yachting industry and now business development manager for Azura Marine. “Our yachts have no need for fossil fuels, no need to plug in to shore power, no need to stop. Our yachts are capable of day and night, 24/7 cruising.”

Azura Marine was founded by naval architects and engineers Julien Melot and Zhou Xueqian in 2012 with the aim of developing emissions-free boating. 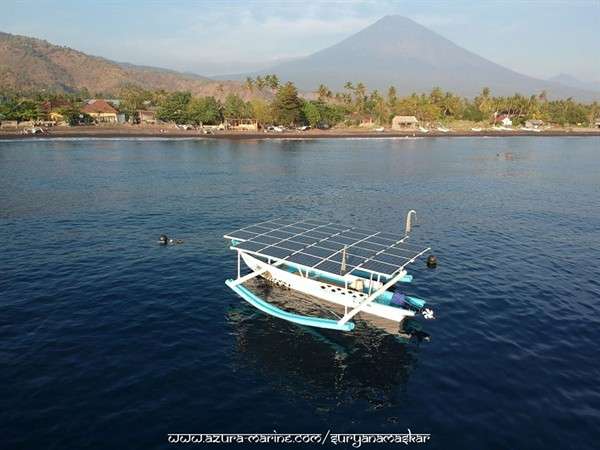 Four years ago, Belgian-born Melot, who worked in ship construction in Singapore, experimented on a small Indonesian outrigger fishing boat, fitting it with a solar canopy. That boat, Surya Namaskar, has since travelled extensively in Indonesia on solar power alone.

Zhou is a professor of hydrodynamics at China’s Harbin University, and he used super computers to test and design the Aquamina 40’s hulls for maximum efficiency and for blue water capability.

Azura Marine’s yachts will have emergency generators as back up, and hybrid models are available. According to Azura Marine, the onboard electric motors only need a small bearing change (about US$5) after 20,000 hours, otherwise the engineering is maintenance free.

On the new Solar Eclipse, a solar roof area of 58m2 charges a 60kWH battery bank. Twin 10kW e-propulsion engines are used to generate speeds of up to 10 knots. On battery, the Solar Eclipse has a range of 50nm, while on solar power alone, the boat can cover 100nm in 24 hours. Though relatively slow going, the ability to forego shore power and bunkering could be big pluses for owners cruising far-flung island locations in Southeast Asia and the South Pacific.

The 13.25-metre Solar Eclipse has a beam of six metres and six berths. The roof, where solar panels are embedded rather than bolted on, doubles as a rainwater collector.

The first Aquamina 40, Solar Eclipse, was built in fiberglass, but according to the company, all subsequent hulls will be built in marine-grade, 5083 aluminium. Azura Marine also offers a range of other boats besides yachts, including ferries, dive boats and plastic collector boats.