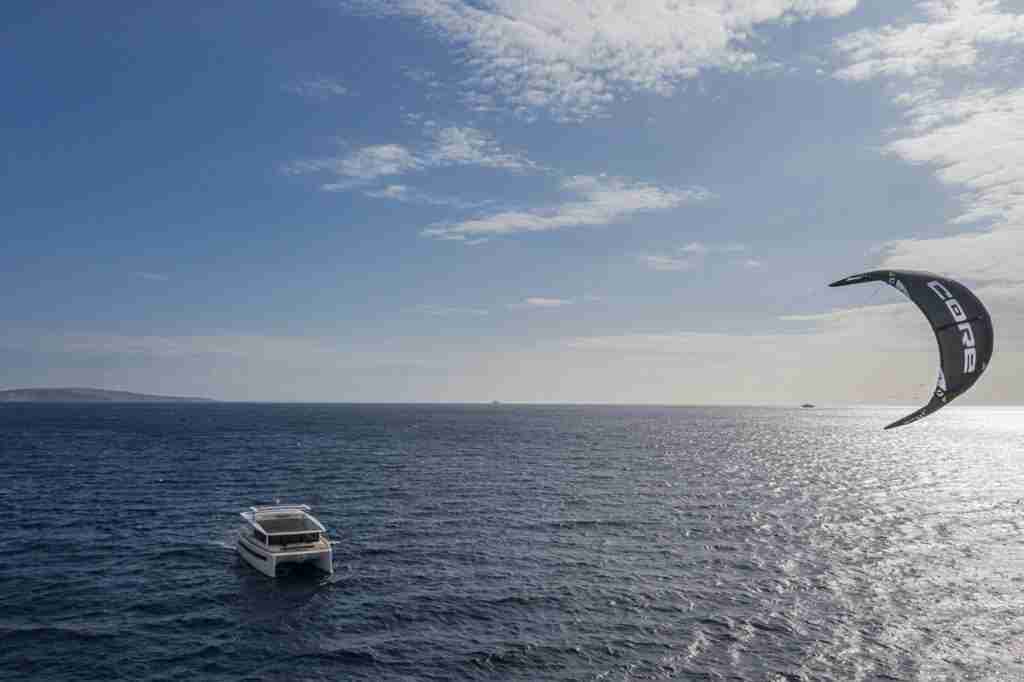 Silent-Yachts, the Austrian builder of solar powered catamarans, has released images of its new Silent 60, which features the option of a kite wing. Kite wings, which fly in a figure-8 pattern to generate power and work as a “wind assist” to the main propulsion system, have been gaining popularity in recent years thanks to the shipping industry’s effort to decarbonise. Kite wings have been retrofitted to power cats before, notably Sunreef’s Damrak II. The new Silent 60 is the first yacht to come with a kite wing as option.

The Silent 60, launched from the PMG yard in Thailand, carries 42 solar panels for 17 kWp delivered to two electric motors of up to 2x340kw. Silent says the 60 can cruise with zero emissions on solar power alone for up to 100 nautical miles per day. The kite wing, which can 9 or 13 square metres, is now an option on all Silent Yacht models. 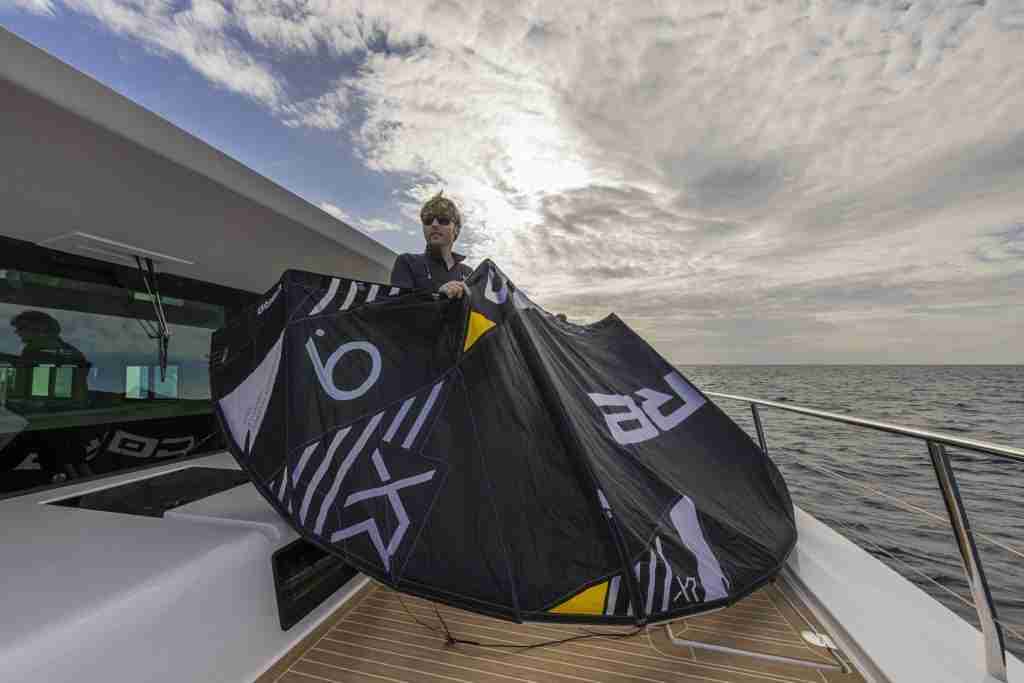 There is a dedicated storage locker under the foredeck to house the kite wing and all its components, including an electric winch and a short, collapsible mast. On the new 60, the mast is connected by four shrouds to the deck, distributing the forces to the hull structure. Silent Yachts says future yachts will have the mast on a baseplate inside the locker to eliminate the shrouds. The yard says 8 units with kite wings have been ordered. 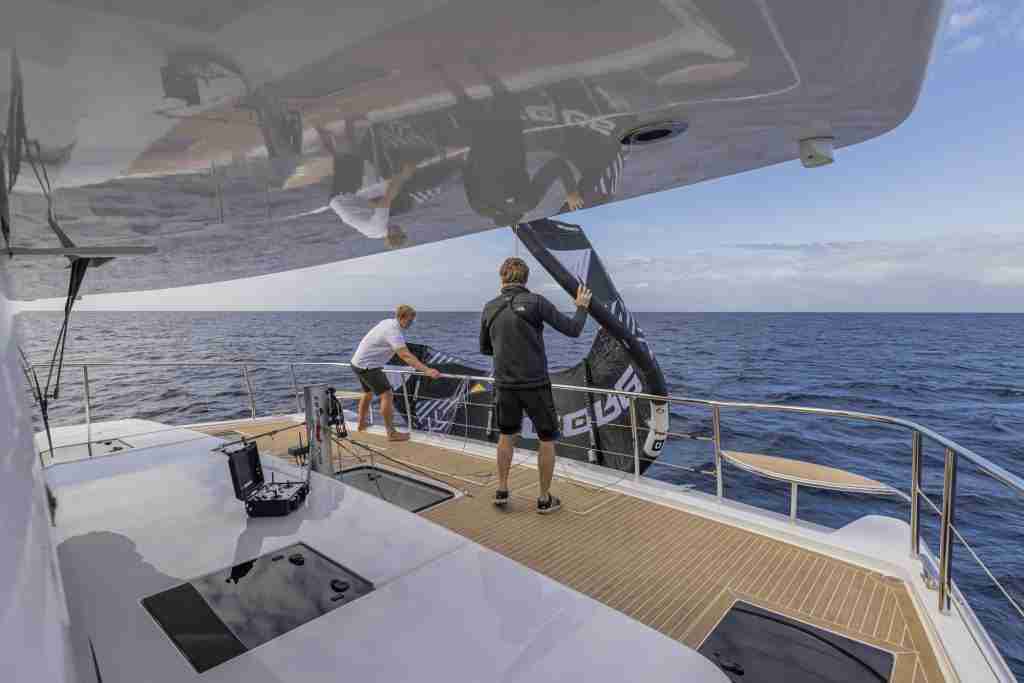 After inflating the kite, it is released overboard to drift away on the surface of the water. Pulling on the lines launches it into the air and once it reaches the optimal flight height, it begins to trace a figure “8” in the sky and generates power to pull the yacht. 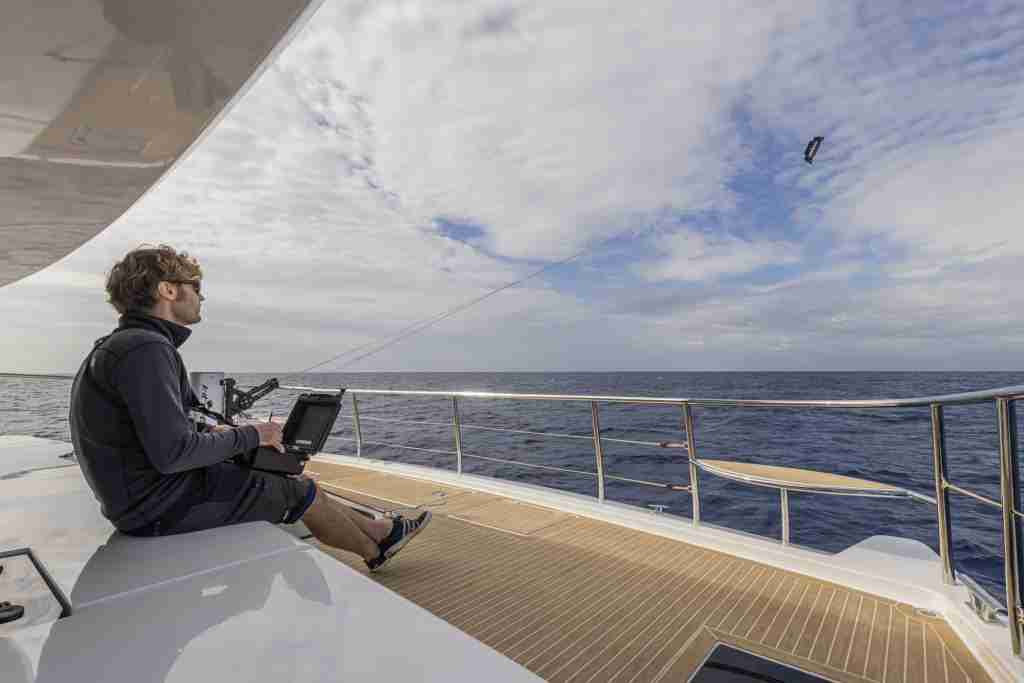 To retrieve the kite, the controls move the kite to a position right above the boat where it has the least pull. It is then winched down electrically and collapsed over the foredeck.

The kite wing allows the yacht to benefit from wind power, but without blocking the solar panels, as a traditional sailing rig would do. The kite wing rig is also substantially lighter than a sailing rig, while leaving deck space undisturbed. Silent Yachts CEO Michael Kohler says that a kite wing generates as much as 10 times the power power square metre of area than a traditional sail does.

Kites also fly higher than sails, and can thus generate power even in light conditions.

Unlike a conventional sailing boat, the best results were directly downwind. Under kite power with no engines on or propellers turning, the boat speed was between 4 and 5 knots

“We tested the performance on different headings and at wind angles of up to 40 degrees with the 9-sqm kite,” says Silent-Yachts’ Captain Mike Wandler. “Unlike a conventional sailing boat, the best results were directly downwind. Under kite power with no engines on or propellers turning, the boat speed was between 4 and 5 knots. We then switched on the electric motors drawing just 1kW each to reduce drag from the propellers and improve the flow of water over the rudders for better steering, this led to boat speeds from 6 to 7 knots over the same headings – a significant improvement on our original predictions.”

Because a kite wing pulls on the yacht, Silent-Yachts says it is better to have the engine running at low speeds, to create better steerage. Kohler said that at Beaufort 5 conditions (17 to 21 knots wind speed), the yacht could maintain 6 to 7 knots indefinitely. 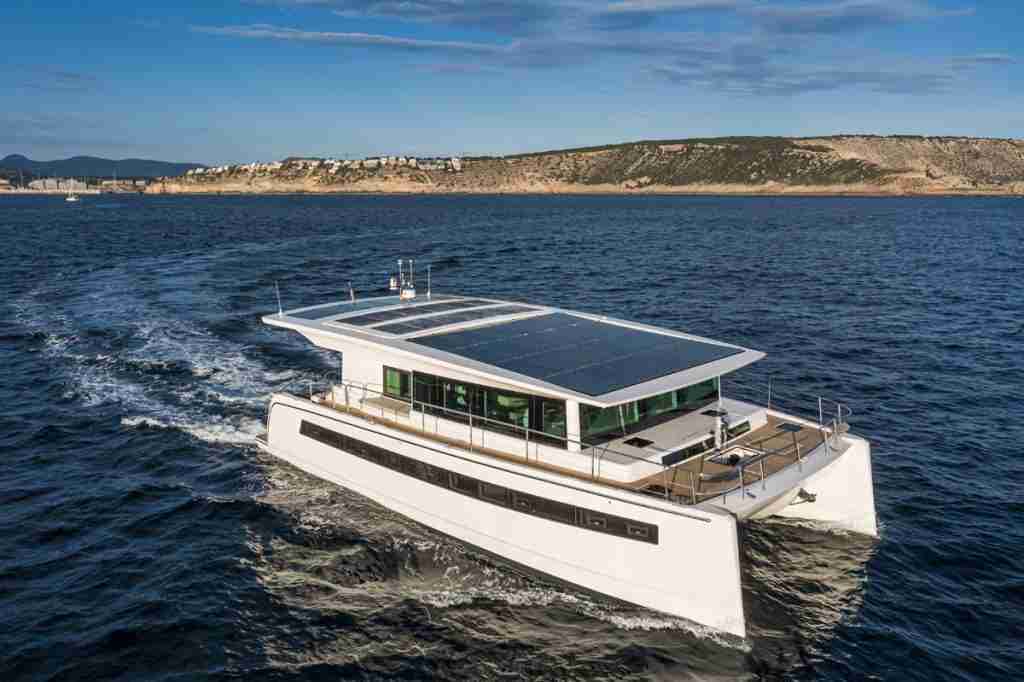 The new 60 is part of a running series of new yachts from the Silent-Yachts brand, which promised a number of new models for 2021.

Read: Silent-Yachts to launch 15 catamarans in 2021 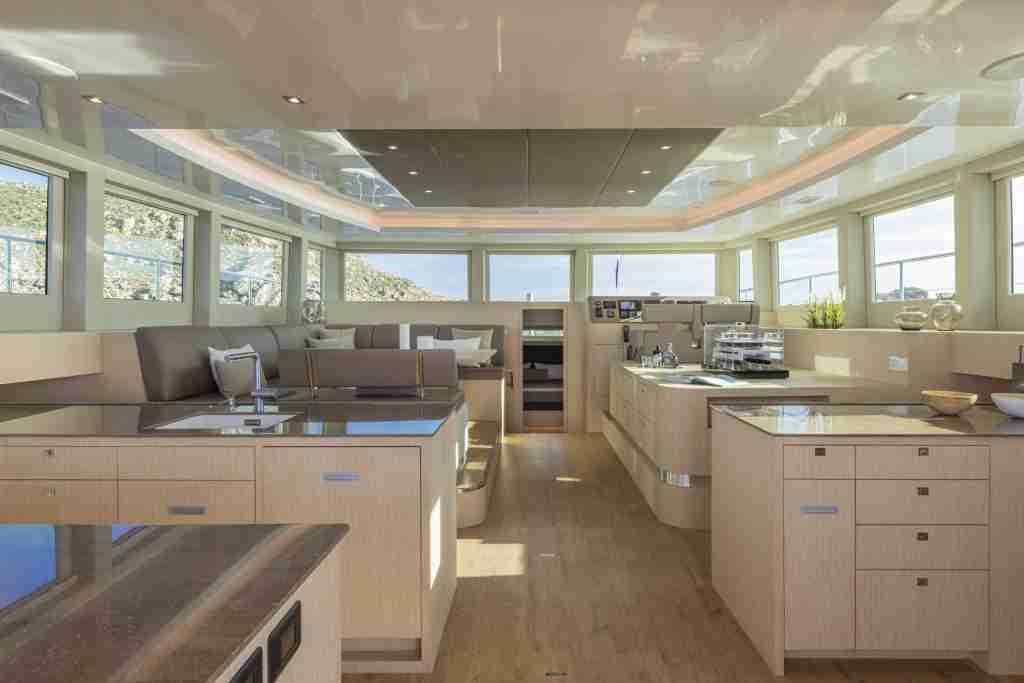 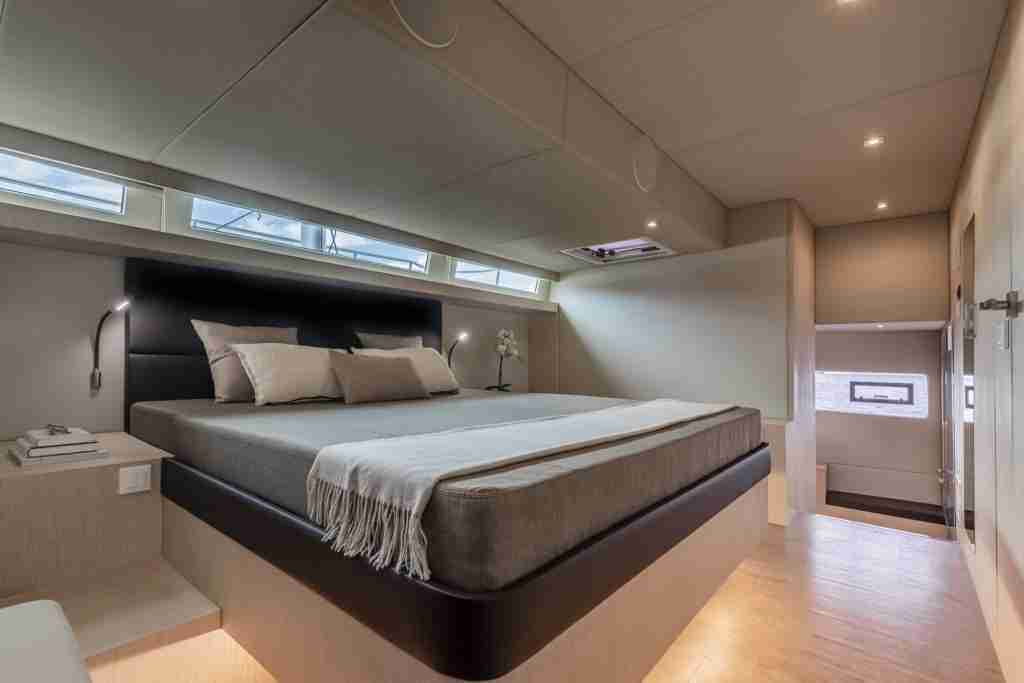 The new 60 has four guest cabins on the lower deck, with other layout options available. Thanks to her shallow draught of under 1 metre, the yacht can access shallow bays often found in Southeast Asia or the Caribbean. The hydraulic platform at the stern can carry a 4m tender. The 60 has a cruising speed of 6 to 8 knots, but can reach 20 knots if needed.

In Asia, Silent-Yachts is represented by Farfalla Marine Group. 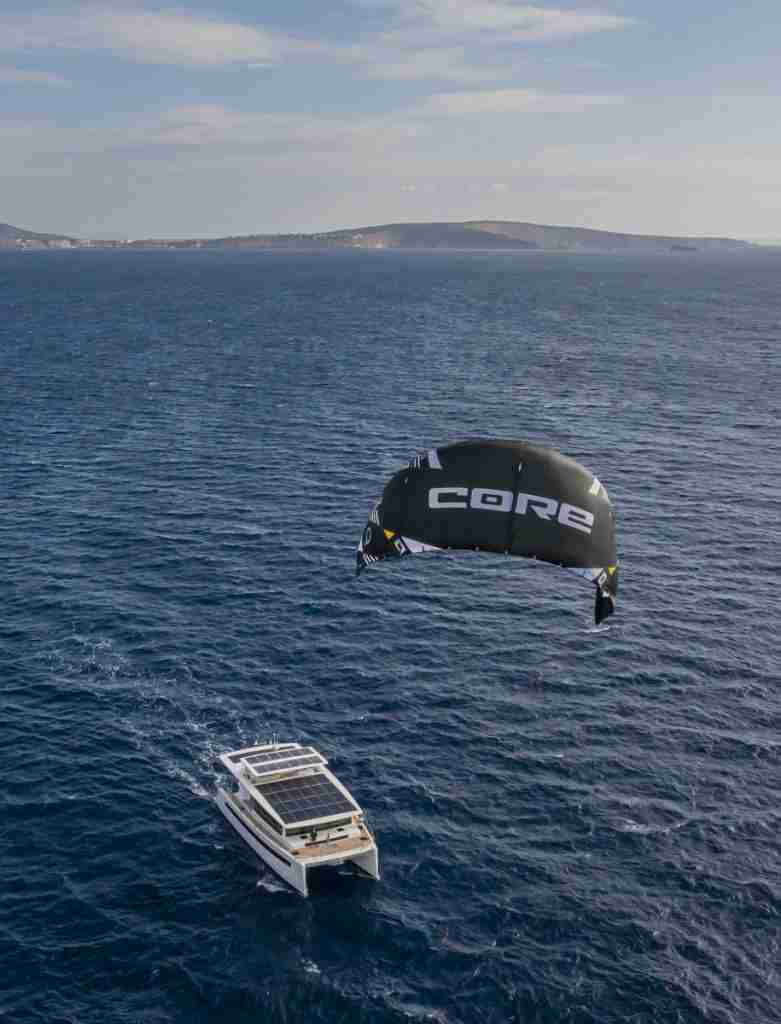