Take four former drug addicts, put them in charge of a heavy lumbering yacht with a mind of its own and you’ve got Hong Kong’s most innovative drug rehab programme 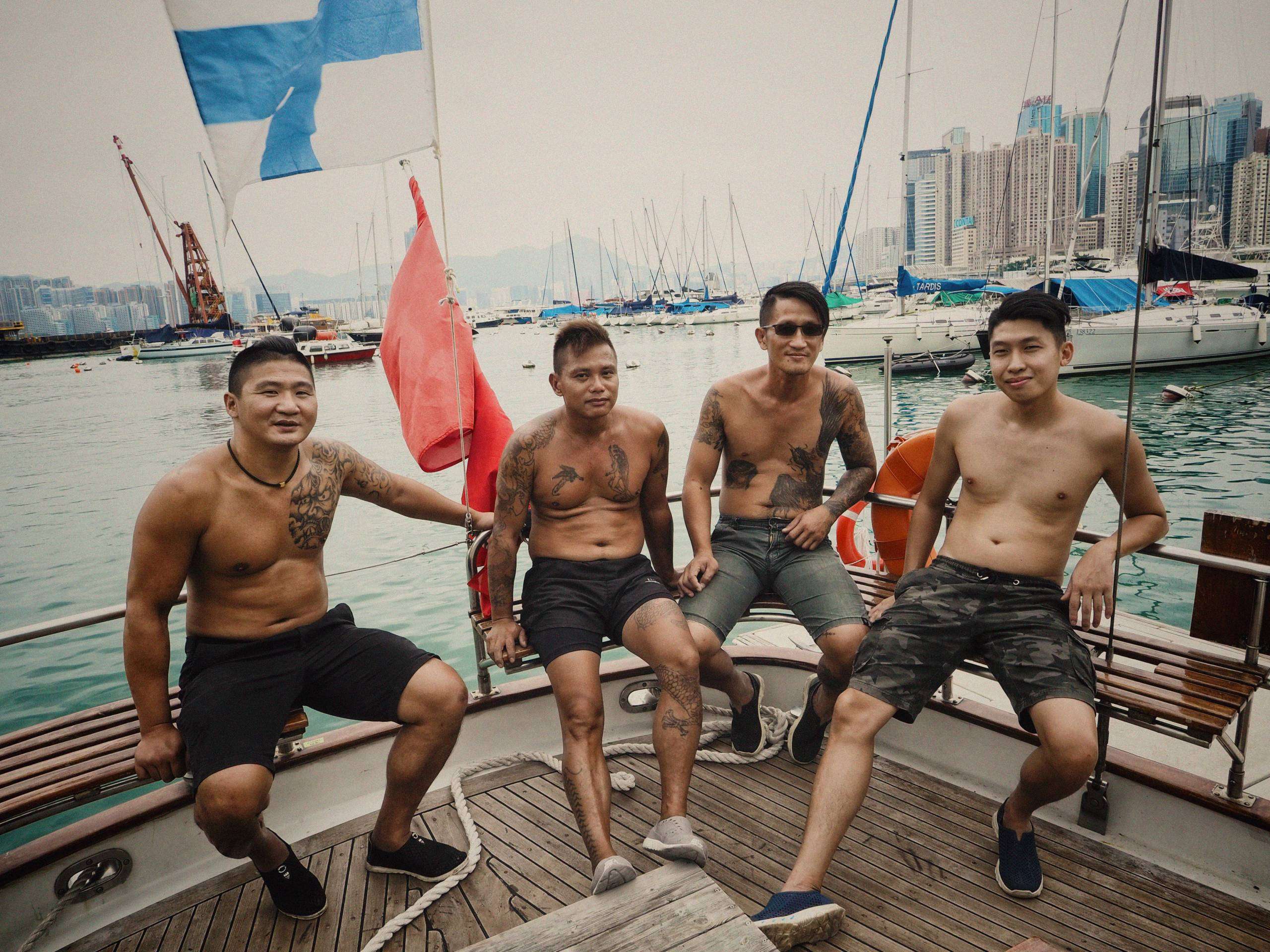 We are one week into autumn in Hong Kong, but out on Victoria Harbour you wouldn’t know it. It’s 32 degrees, the sun’s high, and Hong Kong’s steel towers are reflecting shards of sunlight through the sultry haze.

Our 56-foot yacht Manggongzhu is threading through a lazy tack in a light breeze on one of the world’s busiest harbours.

Seasoned skipper Andy Lee is at the helm shouting orders in Cantonese to his crew – a one-time cat burglar and heroin addict, a former car smuggler and Ice user, a former heroin addict and a former cocaine addict.

To help the crew navigate the huge Taiwan-built Formosa 56, the sailing yacht is plastered with post-it notes firmly sticky-taped to its fixtures and written in Chinese: 左舷 port side, 右舷 starboard side and everything else in between.

This, by itself, might not inspire much confidence in the skipper and the crew except that Patrick, Tony, Tze Sum and Ten Boy – who sound like the cast of Trainspotting but are part of the mentorship programme of the Hong Kong Yacht & Start-Up Association – are all over the boat like muddy dogs.

They’re manning the coffee grinders, tailing the jib sheets and helping the boom over in the light breeze. The only thing that tells you they haven’t been crewing very long is the intense focus, attention and respect they give this enormous boat. Even in a light breeze, Manggongzhu is scary big. There’s no changing your mind once you’ve set her to going about and all the decisions have to be made, and communicated to the crew, way ahead of time.

As a drug rehab programme, it’s second-to-none. In the impulsive world of drugs and crime, bad decisions are allowed to sit around accruing interest, but on Manggongzhu there’s no time for excuses. It’s all about teamwork and any mistakes need to be addressed immediately.

“The boat is a reflection of your weaknesses,” says 32-year-old Patrick Leung Chun-wing. “It’s a really a mirror of the things you’re doing wrong … and even if you wanted to run away, there’s nowhere to run to,” he laughs.

Trying to escape the consequences of terrible decisions emerges as something of a theme as the crewmates recount their life stories. Ten Boy “Sap Tzai” tells APB of his life as a career car smuggler, earning as much as HK$20,000 per shipment of dismantled cars from mainland China. Most of the money went towards fueling his Ice habit. His career ended in a high-speed marine police chase culminating in him diving overboard and attempting to make a dramatic swim for it.

Patrick says he was addicted to cocaine, Tony to heroin, Tze Sum has a deep gouge in his right leg from an infection caused by intravenous drug use. While they bear the scars of a tough life, they give off a strong electricity of optimism. Ten Boy wants to focus on his seamanship to build his maritime career; he already has a Pleasure Vessel Operators Certificate Grade 2 (for boats of 15m and under) and is now aiming for the difficult-to-master PVOC Grade 1 which will allow him to take charge of any pleasure vessel in Hong Kong. 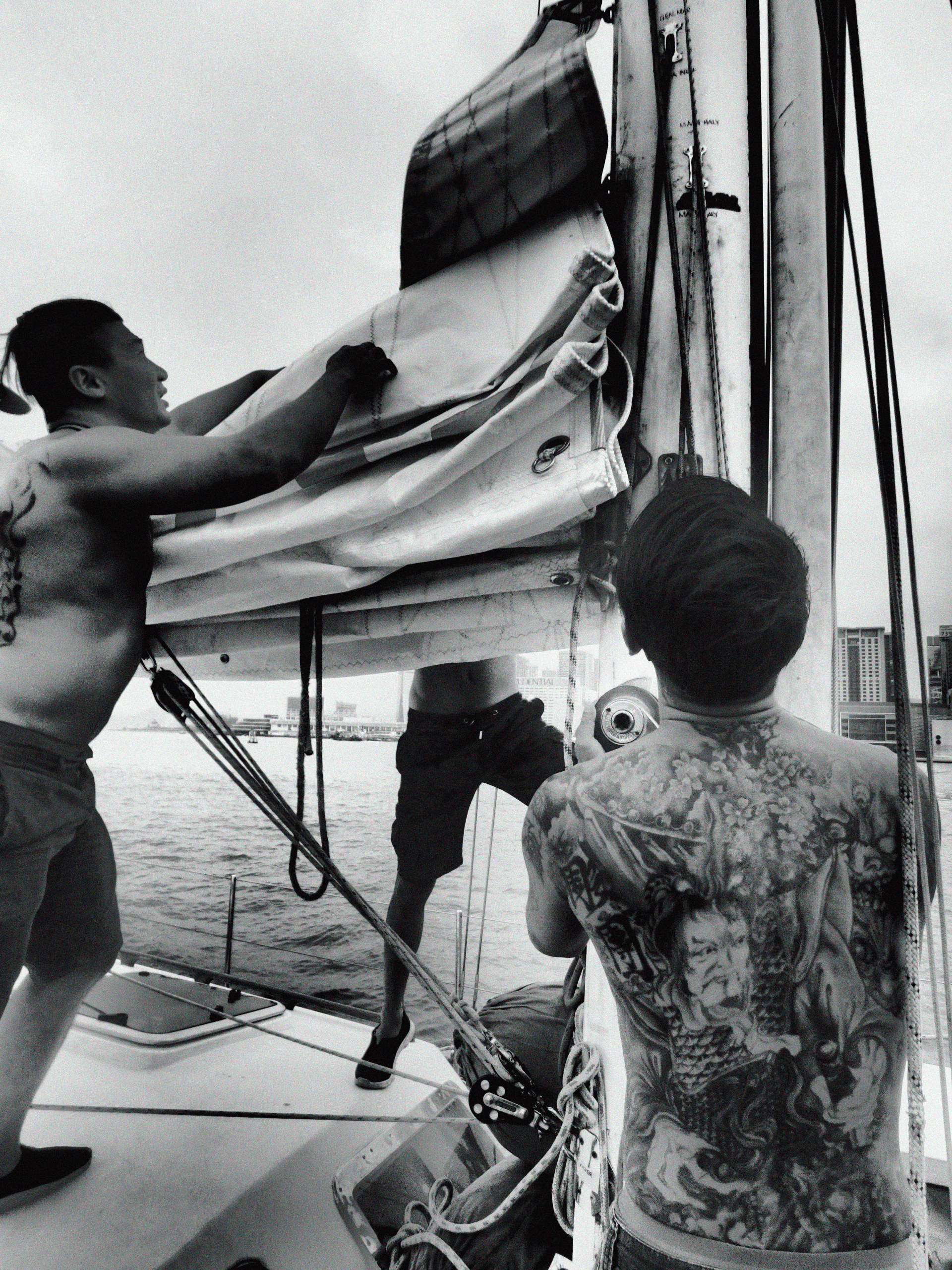 Patrick says he plans to study as a minister at the Christian New Life Association, the group that runs the drug rehabilitation centre in Yuen Long where the crew has been recruited. Both Tony and Tze Sum emphatically say there’s no going back to their previous lives after the sailing programme.

The one thing they all agree on is that, having not known each other at the start of the sailing programme, just how well they get on together now as crewmates. After all, they have much in common.

The programme is the brainchild Andy Lee, a former businessman who is the co-founder and skipper of the Hong Kong Yacht and Start-Up Association, and his wife Denise Lee, a business journalist at the South China Morning Post. They had wanted to start a mentor programme and landed on Manggongzhu when they saw her for sale in 2018 on the notice board at Shelter Cove Royal Hong Kong Yacht Club.

It wasn’t exactly love at first sight but after three months the couple made an offer and the owners accepted. By then they were so certain she was the boat they needed, they never took her for a sea trial.

“The first time we went sailing on her was when we sailed to RHKYC on Kellett Island (where the boat is moored),” Andy explains. “So we had never sailed or tried out the yacht before closing the deal – whoever hears this is astonished and we find it pretty astonishing, too!”

Manggongzhu is not easy to manoeuvre and is heavy – she has a long keel and two masts. The upside is that she is stable in rough seas and relatively safe

He has spent the last two years repairing and maintaining the vessel on a daily basis but, thanks to his early training as a marine engineer, is a dab hand at refits, attempting everything from splicing mooring ropes to fitting solar power systems himself. He says he has more than 20 years’ experience with vessels of all types including supertankers. 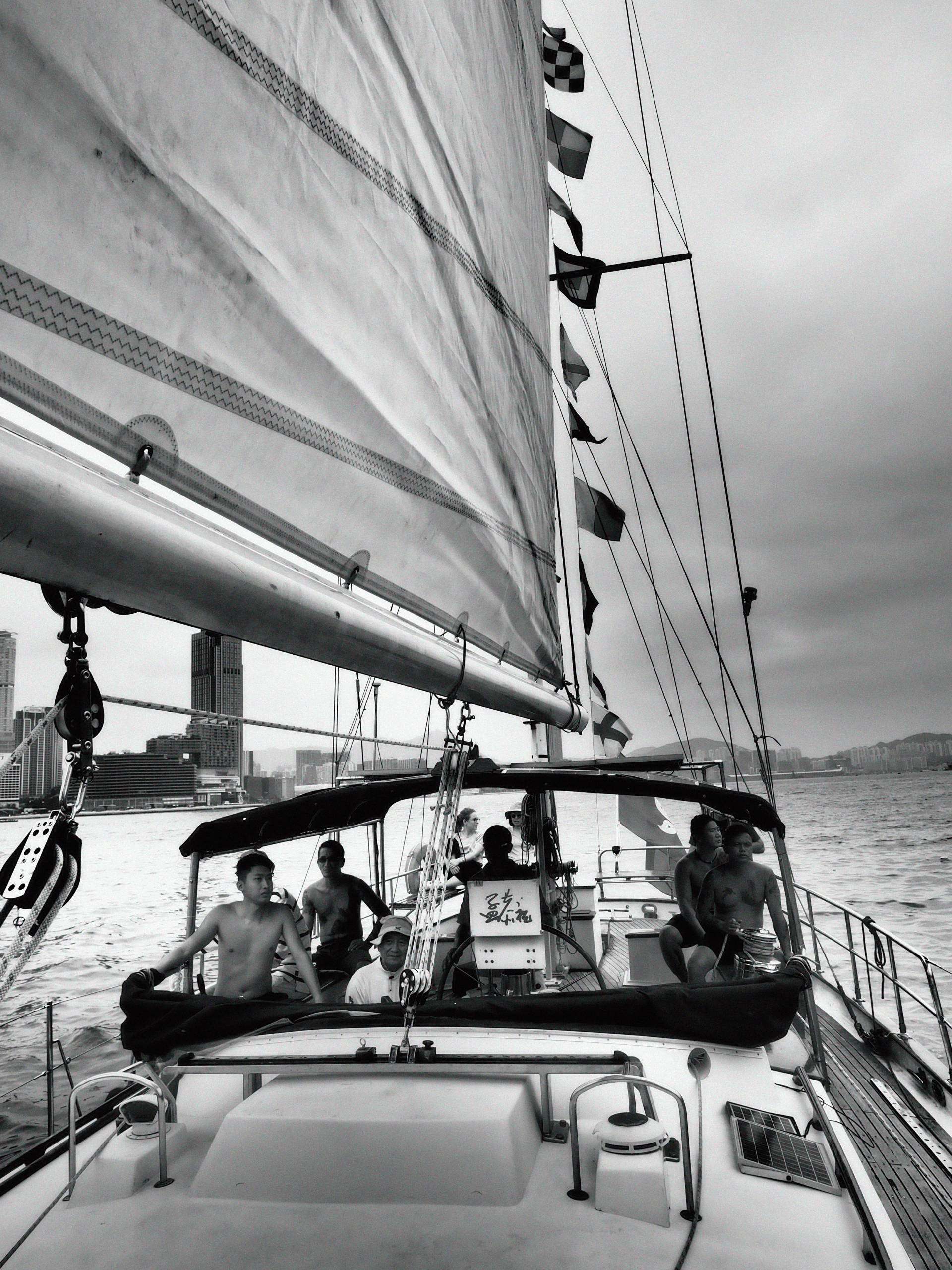 “Manggongzhu is not easy to manoeuvre and is heavy. She has a long keel, a mono engine (100 horsepower) and two masts. The upside is that she is stable in rough seas and relatively safe. She has high performance in strong winds.”

With no conventional education but a strong desire to get ahead as a teenager, Denise says Andy, who later became an entrepreneur in the fashion business, naturally gravitates towards young people who need opportunities.

He once ran a mentoring programme in mainland China, taking six young Hong Kong undergraduates as interns every summer on road trips of thousands of kilometres to study consumer behaviour in China. The long journeys allowed the interns to reflect deeply on their personalities and their values.

“I took these opportunities to teach them right and basic attitudes towards life. For example, they had to be punctual, and say what they meant. If they were late, I wouldn’t wait for them but just start driving away,” says Andy. “Once, there was a student left behind because she was a few minutes late without letting me know in advance. But I came back in half an hour to pick her up. She learned a lesson.”

The yacht mentoring programme was a natural extension of this. Denise admits that Andy can sometimes be a hard taskmaster. “Andy can be very tough on them during training or when they make mistakes because safety always comes first, but I can also see he is a father figure who embraces them for who they are,” she says.

“Many come from broken families or complicated relationships and lack confidence. The time they and Andy spend together is like watching two generations walking together. I see they respect Andy not just as a coach or a mentor but as a person in authority who is like a father.”

Even though they still wear their tattoos, they no longer live in their old selves

Since the mentorship programme started about 18 months ago, the association has trained some 20 former drug addicts on the boat. Each season lasts for about three months and each time takes in 4-5 people. 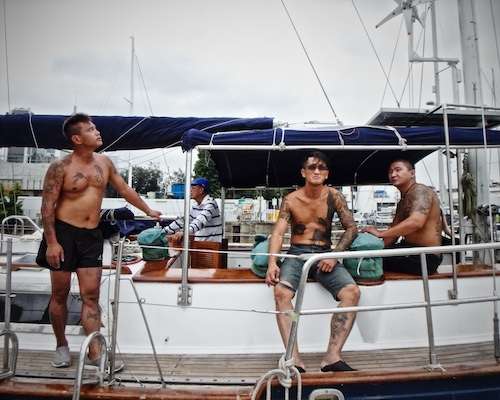 He says the association often chalks up big successes and breakthroughs in a short amount of time. “An obvious change is in their self-esteem. At the beginning, when they walked past the yacht club, they wouldn’t lift their heads up and felt out of place,” Andy says. “But I told them to have confidence in themselves. No one will look down on you.

They got it and made it after a while.

“Even though they still wear their tattoos, they no longer live in their old selves” The association doesn’t just deal with drug-offender programmes and uses the yacht as a platform for many local initiatives ranging from outings for single-parent families to harbour cruises for domestic helpers.

“We have organised several rounds of free voyages for dozens of foreign domestic helpers,” says Andy. “Many of them told me they had never been sailing before or had been in Hong Kong for more than 20 years without ever seeing the city from the sea. “They brought guitars, tambourines and sang hymns all the while taking lots of selfies. I could tell they were fascinated by the voyage and had a great time – this is the sort of thing we want to see.”

The name Manggongzhu in Cantonese refers to the white stick used by blind people and was chosen by Andy and Denise – who rechristened the boat after purchase – as a guiding principle for the mentorship initiative. 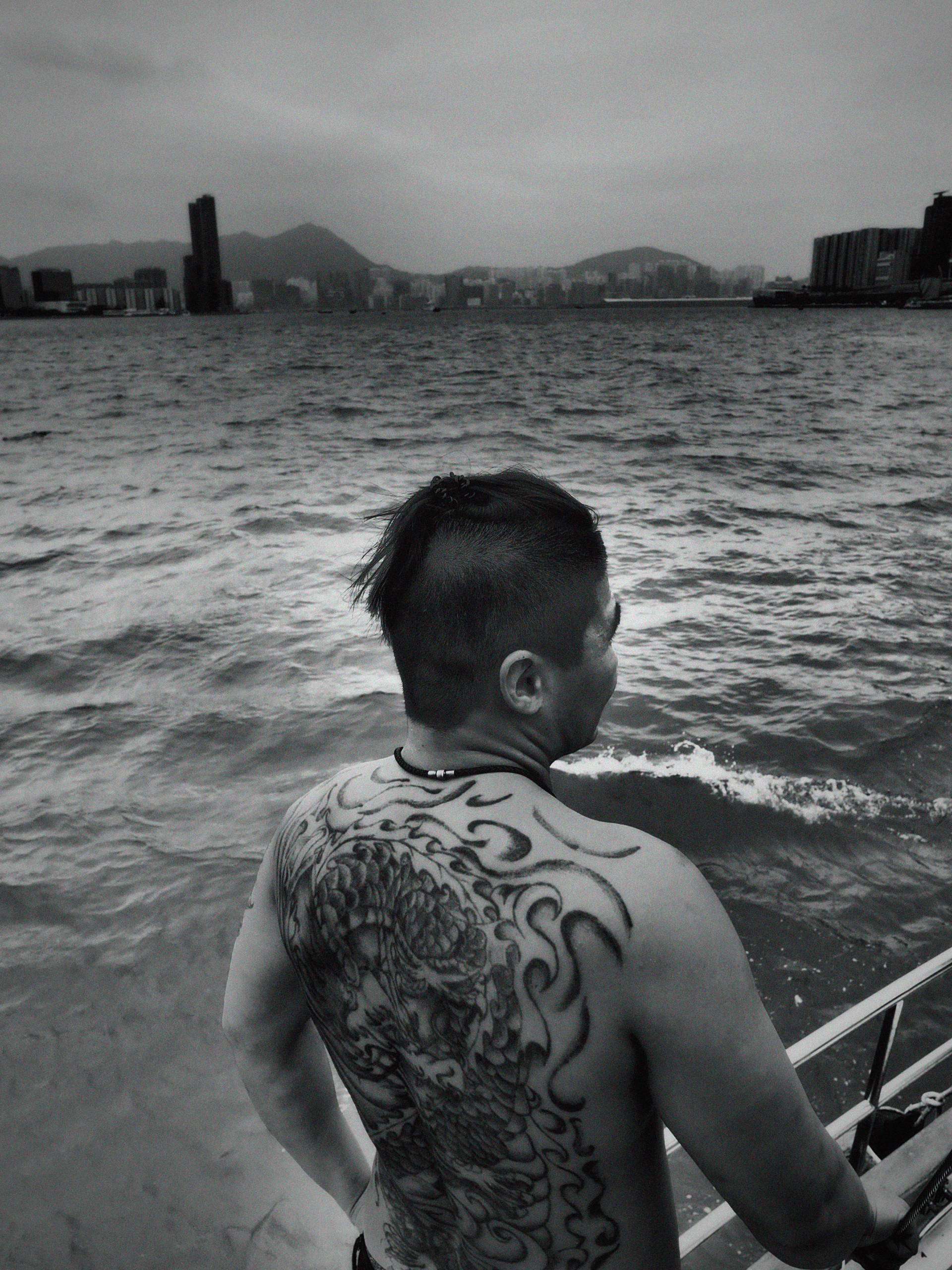 It’s often mother nature – and Manggongzhu herself – that give most of the masterclasses. “With a boat this big, you can’t tell it what do, it tells you”

“I want to reach out to these teenagers and offer them opportunities on the yacht as a platform to broaden their horizon, learn some skills and gain proper and healthy attitudes towards life, using their own creativity and newly learned skills to start their own businesses and make a living.”

To that end, he allows the crew to use the yacht to crew for other groups. “Passengers are welcome to donate to the crew. Another example is they can serve as crew and assist activities for companies hosting team building events on board,” he says, adding that ultimately, the programme aims to guide the way towards better alternatives.

Back on deck with the Trainspotting crew, however, and Patrick says it’s often mother nature – and Manggongzhu herself – that give most of the masterclasses in how best to lead your life.

“Yes,” says Patrick thoughtfully. “With a boat this big, you can’t tell it what do, it tells you.”