Sanlorenzo launched its new Smart Performance 110 (SP110) in dramatic fashion at the recent 2022 Cannes International Yachting Festival. The drama had been heightened by the fact that Sanlorenzo, known for its hallmarks of minimalist design and creature comfort, had recruited the legendary Tilli Antonelli to oversee the design and specifications.

Antonelli, a former racing sailor, founded the Pershing line of sport yachts, where performance under speed is the key factor. He later made waves of a different kind when he founded Wider Yachts in 2010, where his focus was on maximising space, not speed. During a private event in 2021 at the Cannes show, Sanlorenzo teased the audience about its work with Antonelli. Guests wondered what would happen if a man like Antonelli, who seems to enjoy challenging conventions, were left to play with Sanlorenzo’s considerable resources? 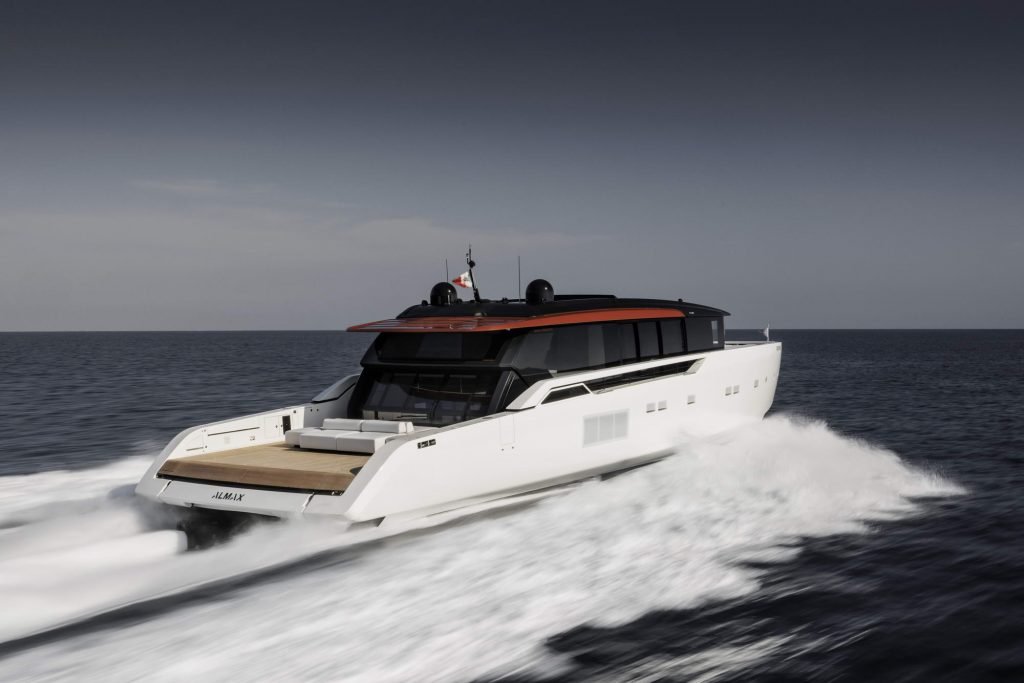 With the Sanlorenzo SP110, we got the answer.

This new 33-metre superyacht is not just a one-off model; it is the start of a new line of superyachts pioneered by Antonelli within Sanlorenzo. The aim was to build a yacht that offered sustainability solutions while providing the performance that one expects from an Antonelli creation. It is part of a wider effort by Sanlorenzo to expand its portfolio and adopt green tech.

The project was a collaboration between Bernardo Zuccon (of Rome-based Zuccon International Project) who oversaw the exterior design, Piero Lissoni on the interiors and naval architect Marco Arnaboldi, who designed the hull. Arnaboldi has made a name for himself as a designer of high-speed, high-performance sport yacht hulls for the likes of AB Yachts, which often employ water jet propulsion systems. 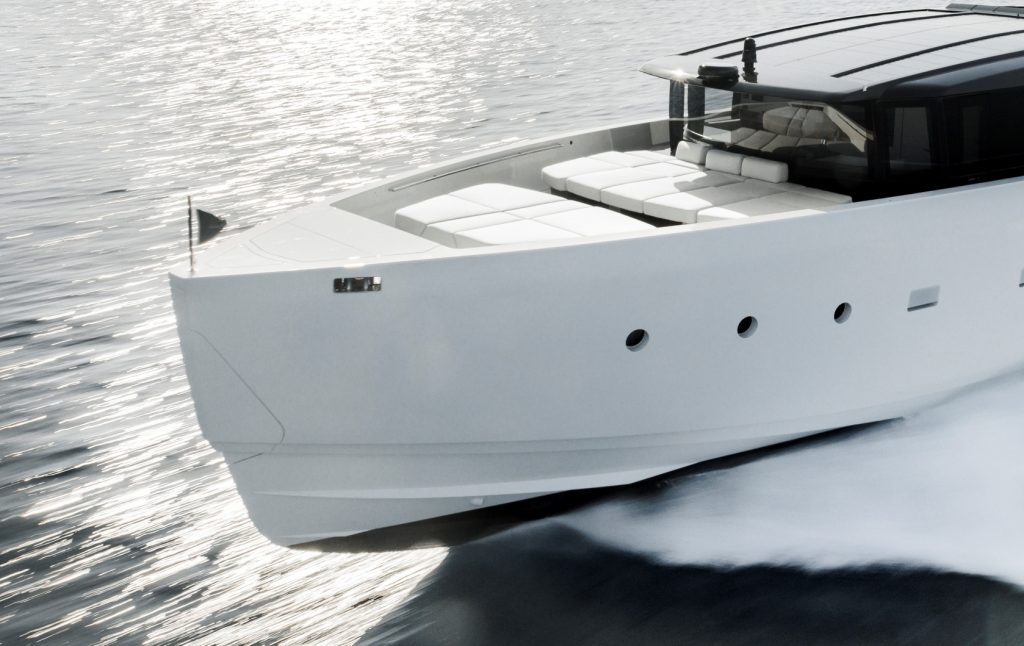 The SP110 has a top speed of 40 knots on a set of three MAN V12 engines for a total horsepower of 2,000hp. Cruising speed is 33 knots. The SP110 also focused on lightweight construction to gain a further performance edge. The yacht has a waterjet propulsion system, allowing for a more compact engineering space and better performance at higher speed. 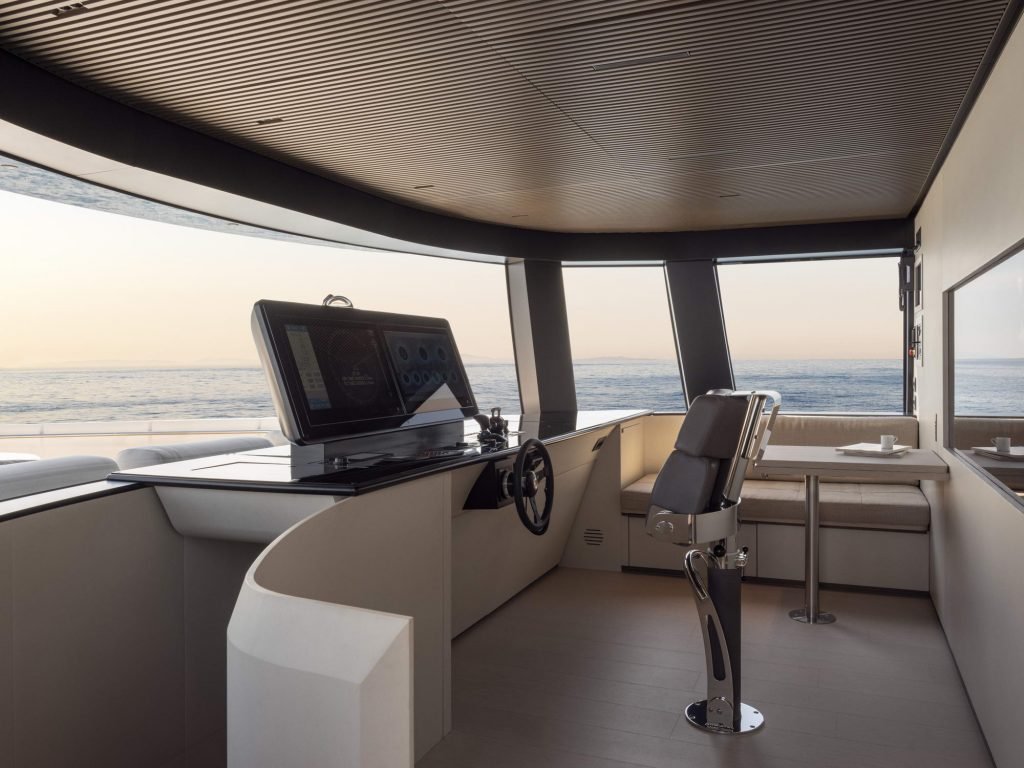 More importantly, the SP110’s propulsion system gives the captain the choice of powering the yacht on one, two or all three engines. This allows slow, highly economical cruising on just one engine, which is the more likely way that owners will move their yacht around, or big bursts of speed if needed.

The hull design employs big lifting strakes and a wide body with fine piercing bow. This allows for the higher speeds and a greater stability while cruising over 30 knots. It also means there is considerable space onboard with a wide beam. 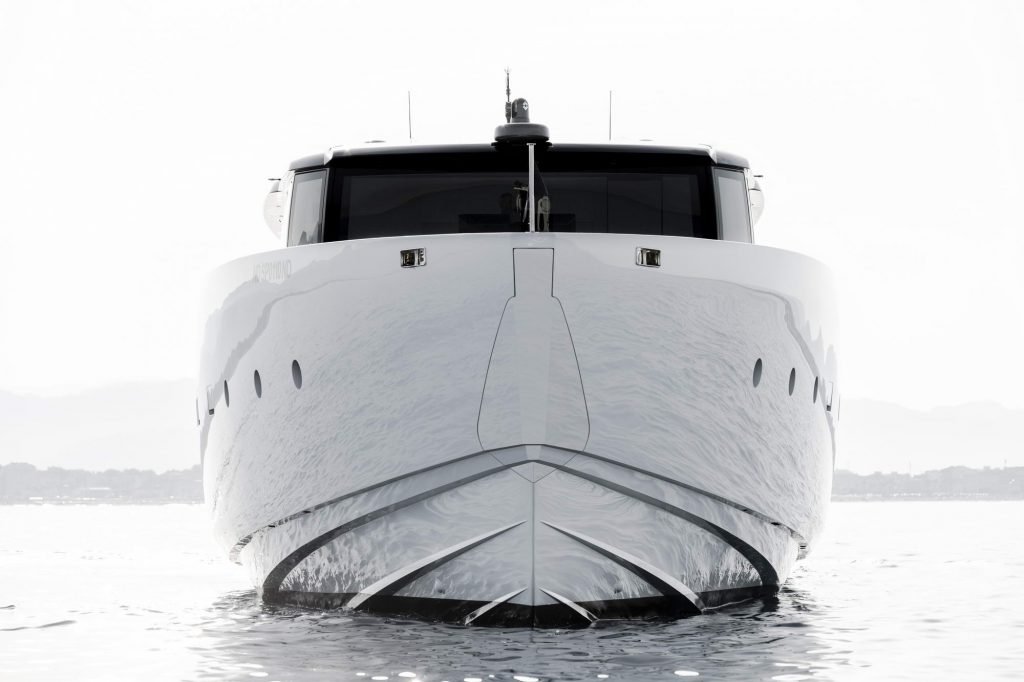 That beam and the interior volume are put to good use. Milan-based architect and designer Lissoni, who worked on interior design for numerous Sanlorenzo yachts, was tasked with turning the main deck space into a bright area that resembles a villa on the sea without walls. 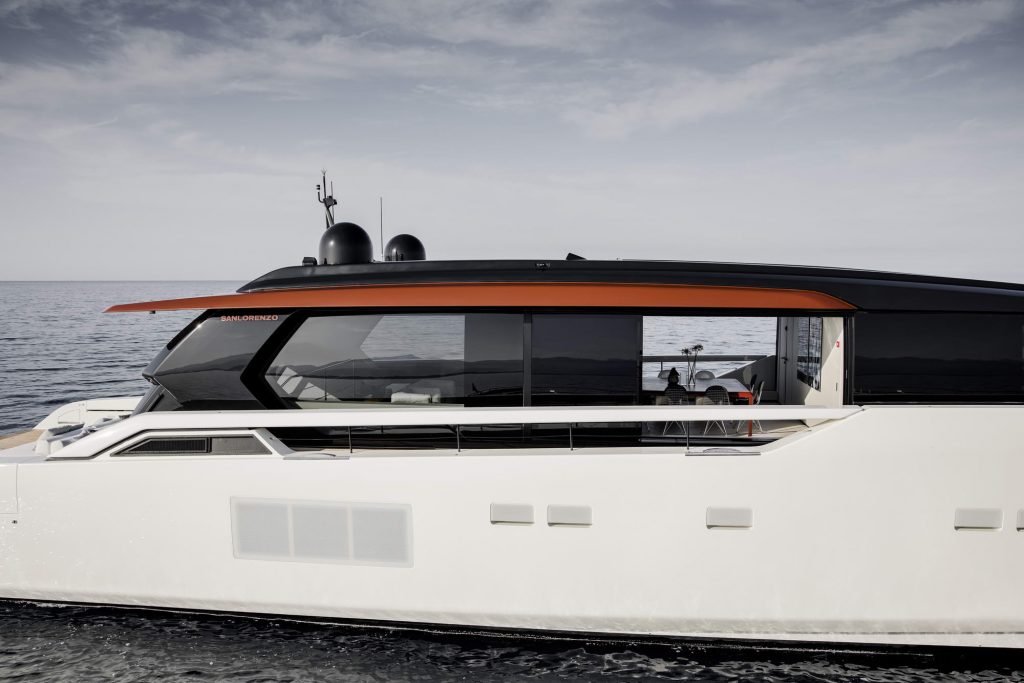 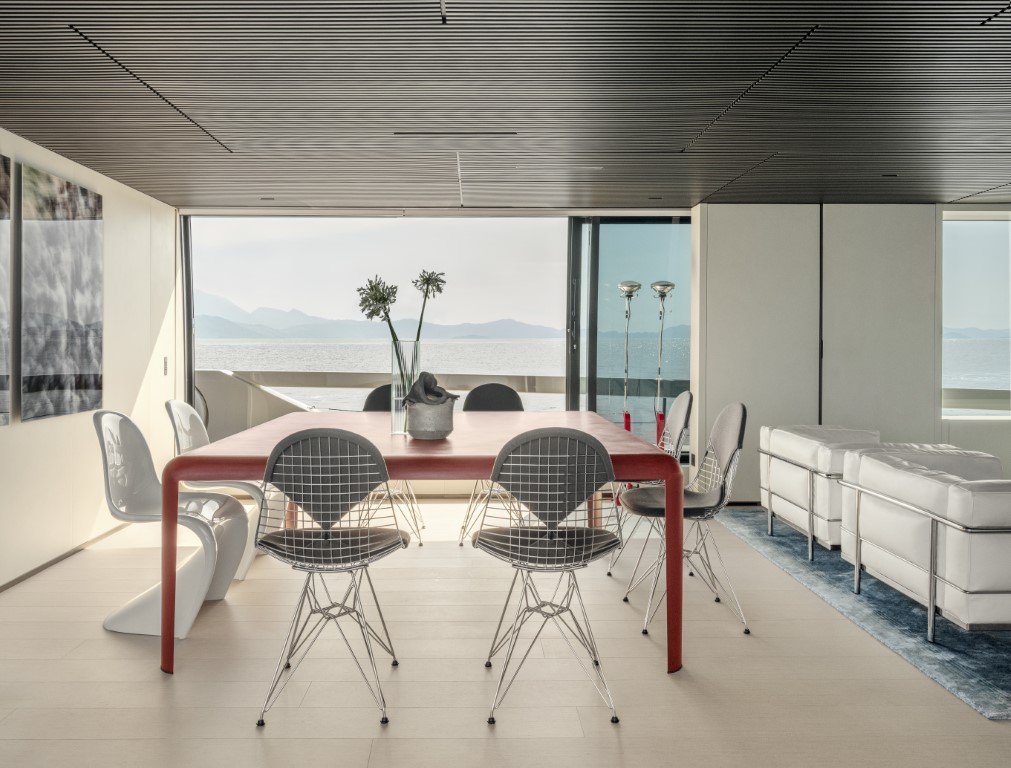 The profile of the SP110 has been kept low – there is no upper deck and no sun deck, apart from a small space for sun pads up top. Instead, the roof houses a photo-voltaic system that produces up to 6kW to help power the hotel load of the yacht. 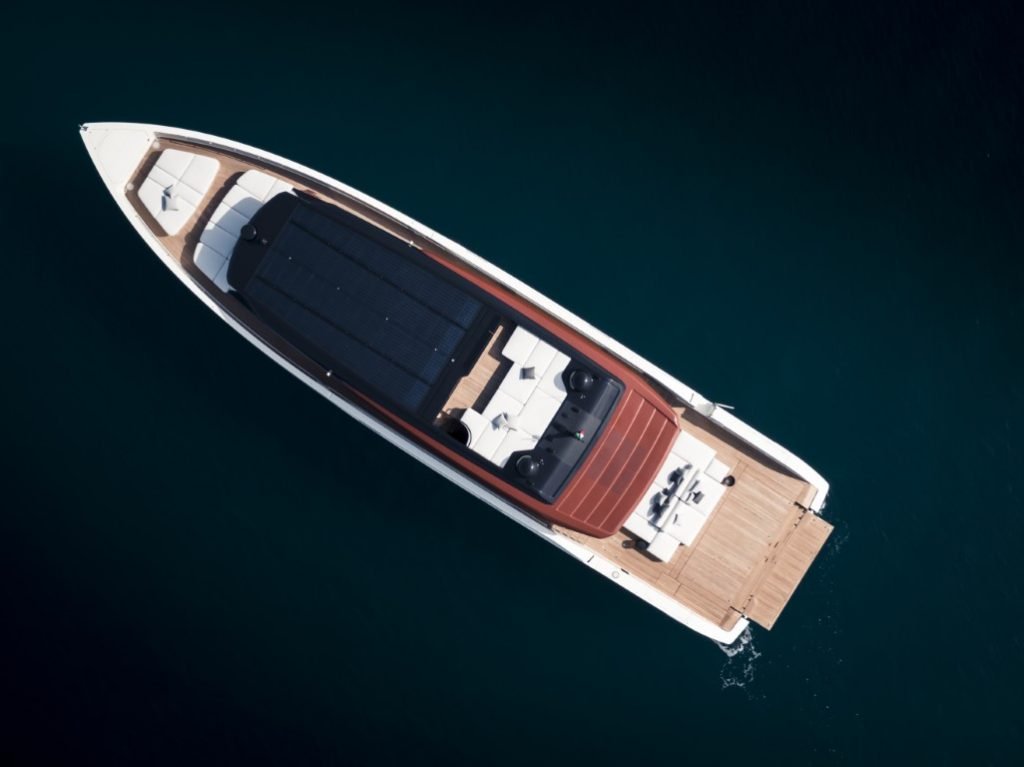 The designers have compensated for the lack of a sun deck or flybridge by creating large bow and aft deck lounge spaces. The bow can be turned into a dining area, a feature that is ever-more present on current yacht designs. 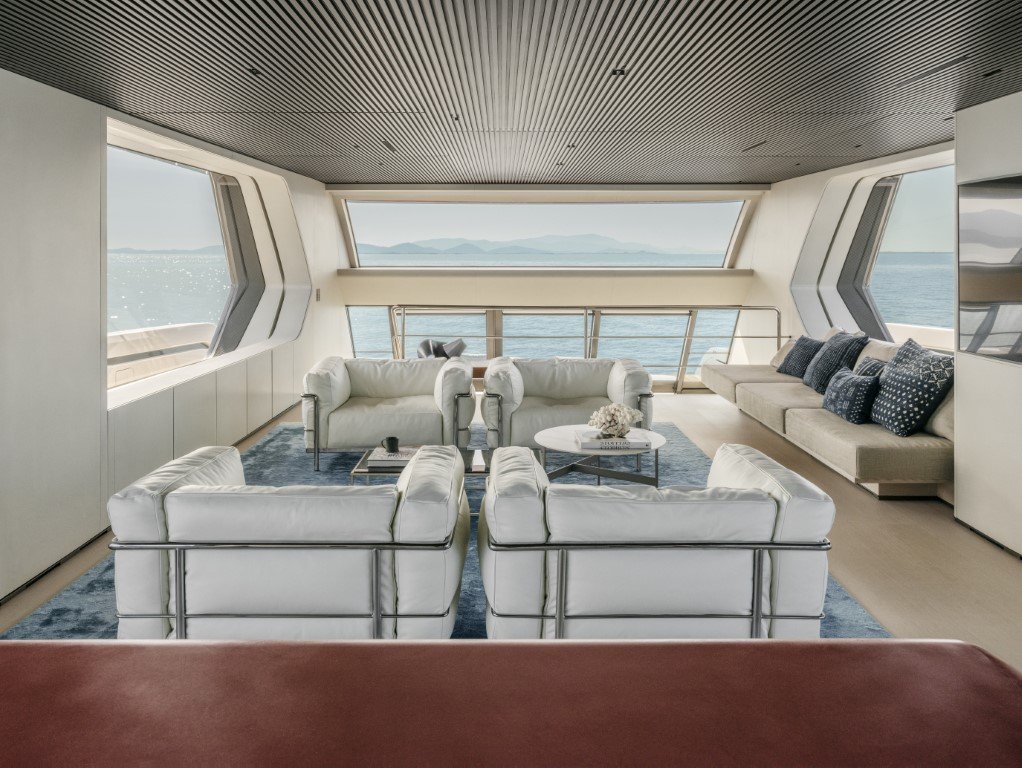 The main deck feels entirely open to the sea, thanks to the floor-to-ceiling windows and sliding doors. Taken together, these features make it seem as if the main deck is a terrace. 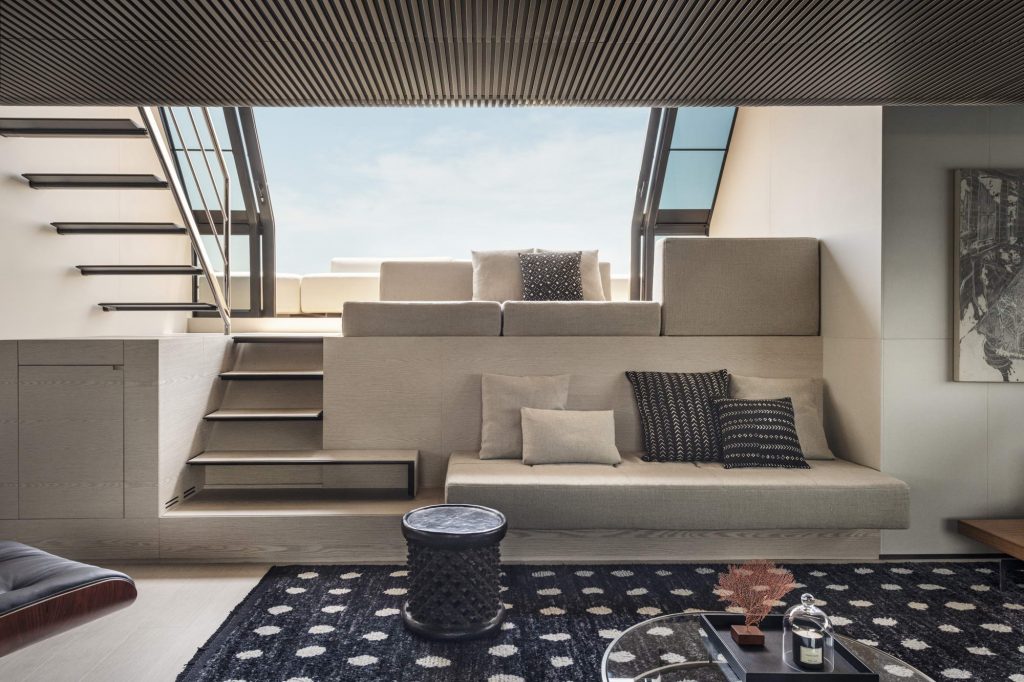 Even more interesting is the connection between main and lower deck. Aft, there is a staircase that lets guests go from the aft cockpit lounge down to a brightly lit social area or up to the main deck. For guests enjoying the comfort on the main deck interior, the aft view is thus extraordinary and expansive. 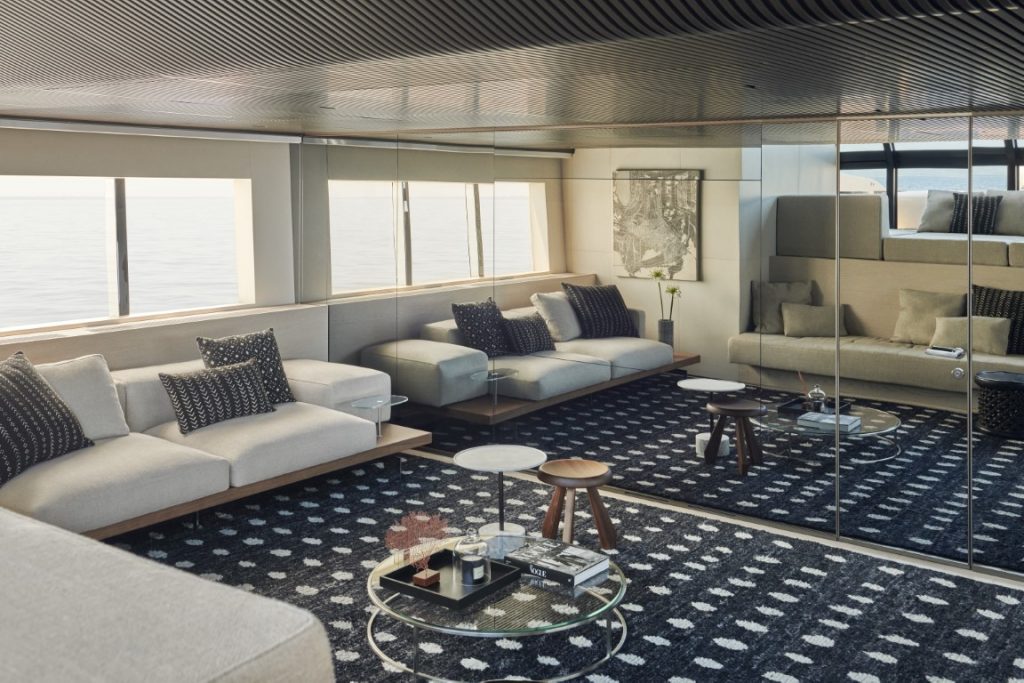 The aft social area can be treated as common space to be share between guests mingling between the interior and exterior aft deck area. Heading forward through a companionway, guests and owner can find their ensuite cabins.

What is sure to delight plenty of Asian owners, who tend to want the crew and chefs out of guest areas, is the incredible degree of crew separation that the SP110’s designers have created. 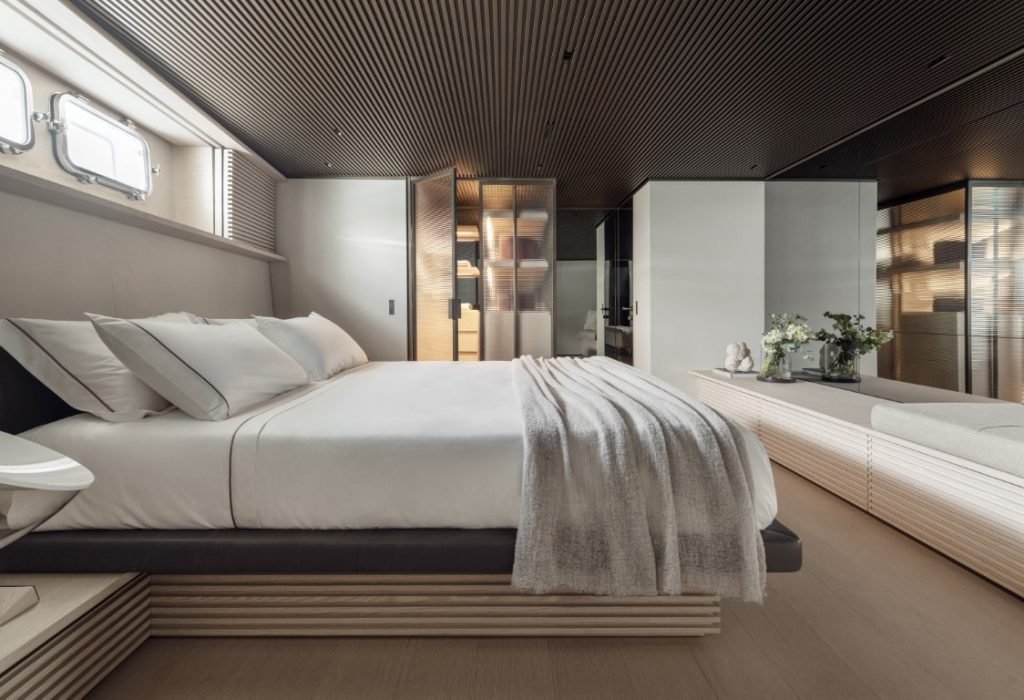 The bridge is all the way forward on the main deck and separated from the living area. The galley is between the bridge and the main lounge area on the main deck. The crew have access to their quarters in the bow via a hidden staircase that runs from the helm station down to the dedicated crew space. In this way, the crew can access the work and service areas of the boat without disturbing guests at all. The captain gets his own cabin, along with crew bunks for four. 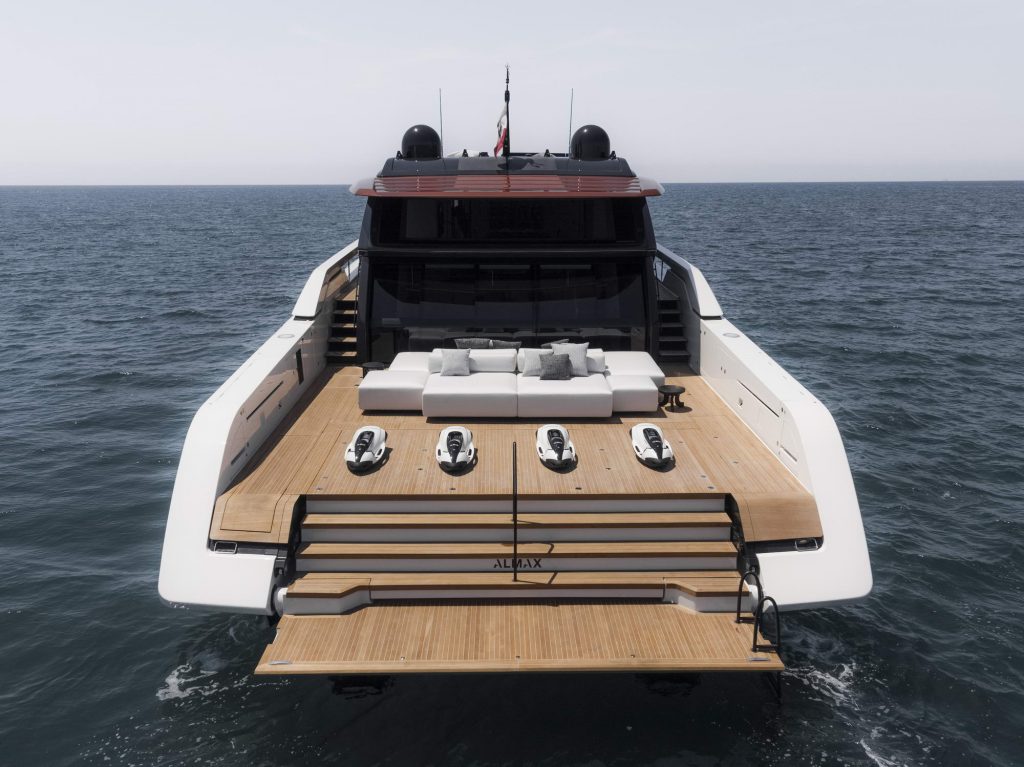 There is a lot on offer with this new SP110, which signals a significant shift in performance and style for Sanlorenzo. Buyers may at first wonder what happened to the sundeck or flybridge given the SP110’s 33-metre length overall. It is only when you get onboard and wander the yacht will you get the sense that Tilli Antonelli has made waves once again.