The Prestige 590 offers functionality and form in a pleasing package, and could even be considered an owner-operator yacht 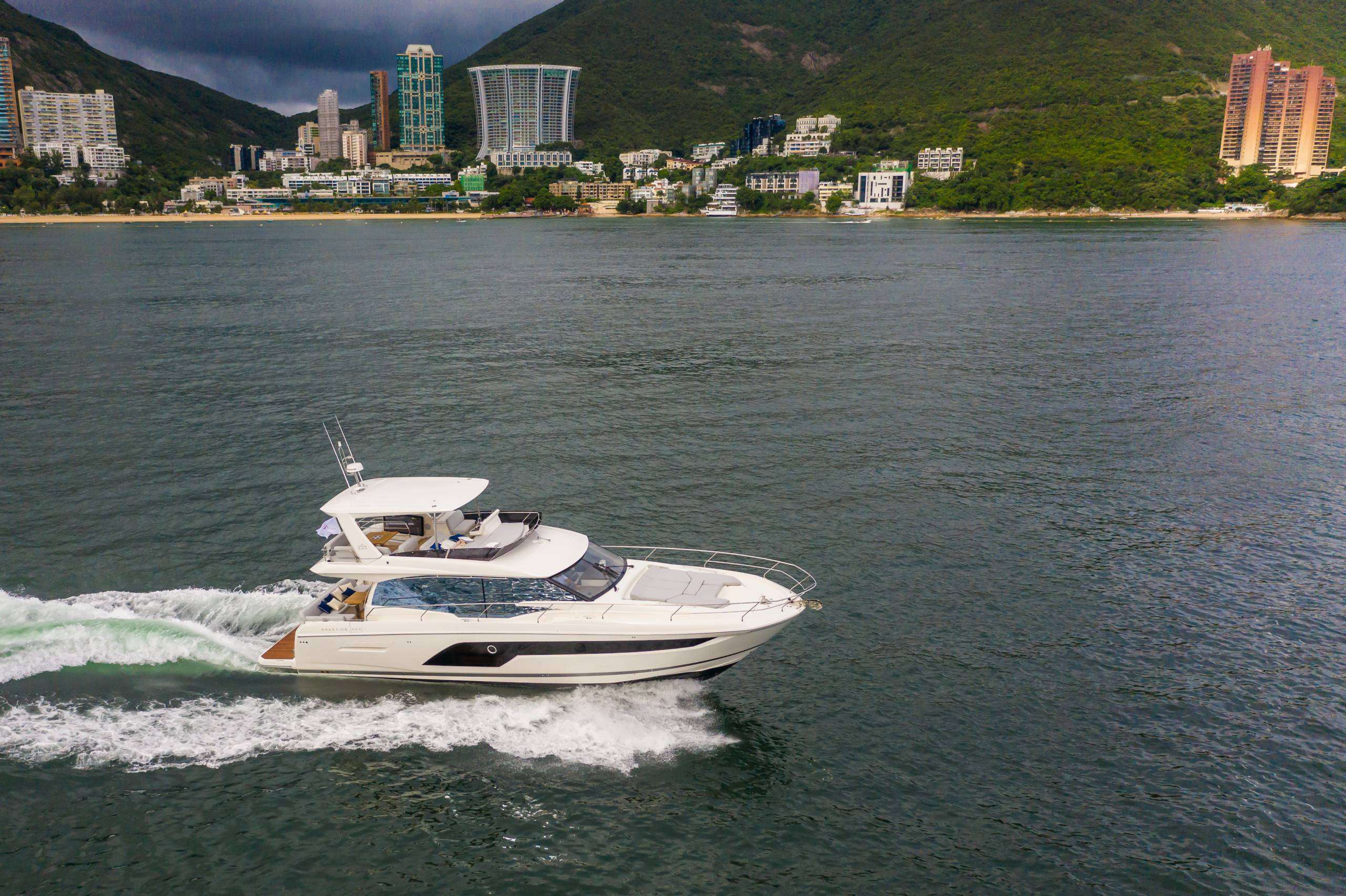 The first thing you notice when stepping onboard the Prestige 590 is the spaciousness of the main saloon. Working with main design partner Garroni Design out of Italy, the Prestige brand has come to be known for functionality with a luxurious touch over its 30-year history.

The 590 is a big yacht, but it still seems like it is meant for an owner-operator. There are fully equipped and nicely designed helm stations on the main deck and the flybridge, with an aft deck joystick control allowing for the operator to make tight manoeuvres when docking stern-to.

Garroni has worked on creating a 360-degree sea view from the main saloon, and they’ve nearly done it

Though the 590 was first launched in 2018 at the Cannes International Yachting Festival, new Prestige 590 and Prestige 590S models are now available with a choice of Zeus Pod-drive or shaft propulsion with V-Drive transmission. The new V-Drive option also allows for larger diameter propellers, which means a lower top speed, but more economical cruising over longer distances. Prestige says the V-Drive option is also good for “high-spec yachts” in warmer climates, while the underwater exhausts keep noise and vibration down.

The 590 has been well received by reviewers and owners alike. Prestige distributor Asia Yachting, which brought the 590 to Hong Kong for the first time in August, sold the boat within days of its arrival, and it’s easy to see why.

The 590 offers a generous swim pad aft, which lowers into the water with steps that deploy automatically as the pad drops. One version of the yacht allows for a captain’s or crew quarter aft, just beneath the aft cockpit. There’s a large window for the occupant of the crew cabin, which is a nice touch, while the crew cabin can be swapped out for a tender garage, which deploys via rails to the swim platform. 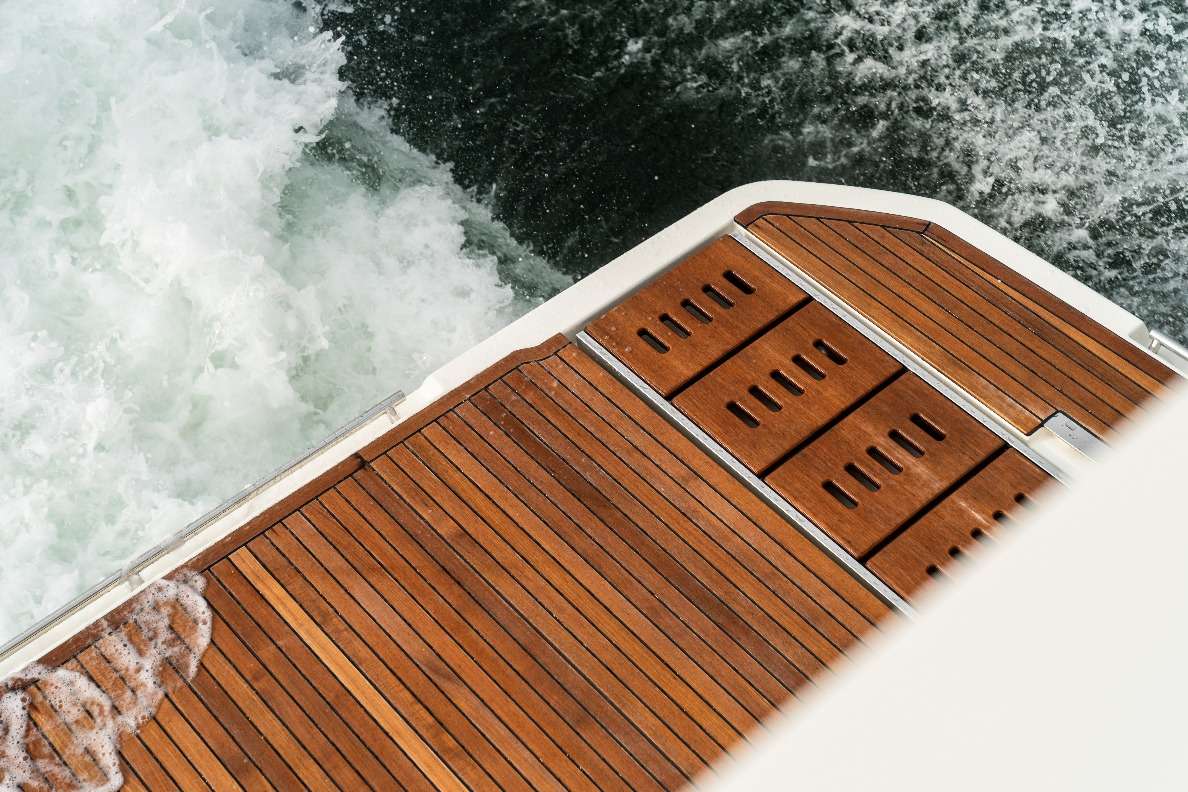 The aft deck cockpit is a generously appointed spot for socialising, with a fold-out table that works either for cocktails or as a full dinner table.

The crew cabin can be swapped out for a tender garage, which deploys via rails to the swim platform

A nice touch from Prestige is the appointment of the galley at the aft end of the main saloon on the port side. A window pops up, secured by two latches in the ceiling overhang. This creates an open entertaining area, joining the main deck saloon with the aft deck cockpit. It also means the cook can join the conversation, and smells from cooking are easily ventilated. 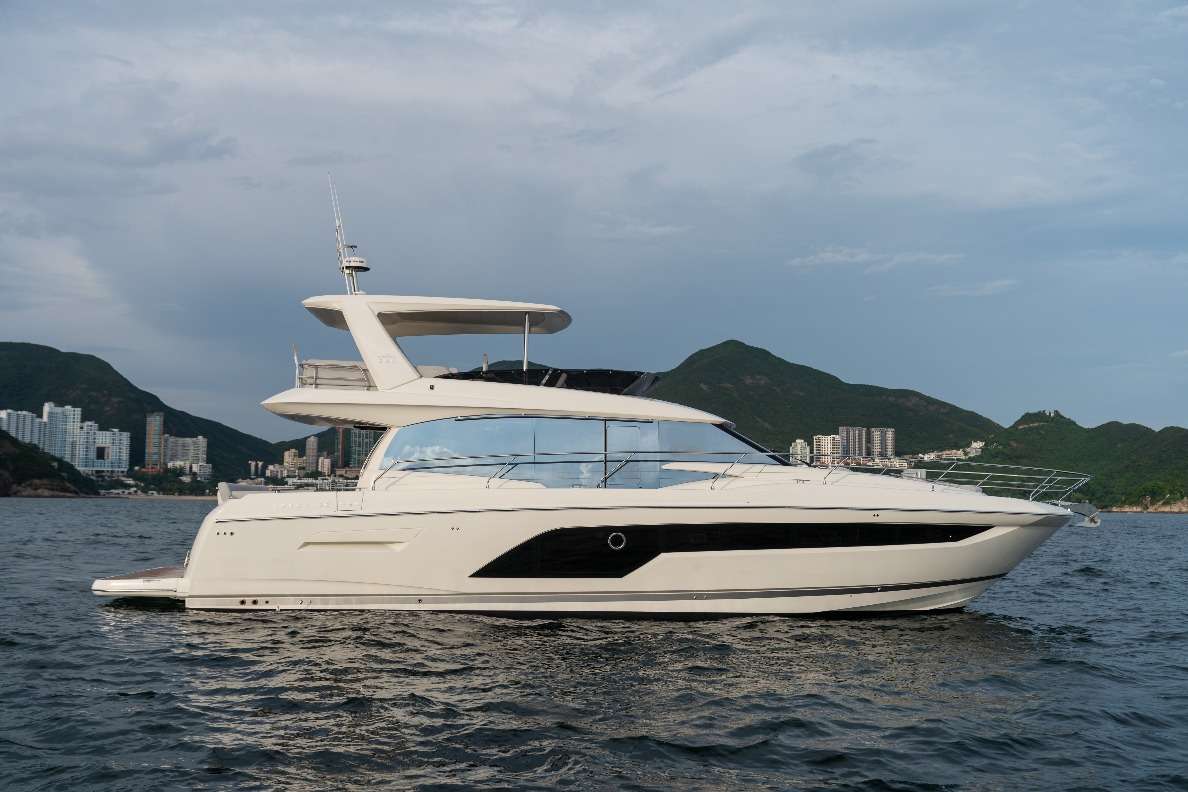 In the main deck saloon, the main table also folds down, switching from cocktail hour to a dinner setting. The starboard-side helm station is very comfortable, with joystick controls, dedicated air-con vents and big-screen displays making control of the yacht a pleasure. Behind the helm seat, there is a side door, making it easy for the captain to get a view of the side when docking. The open door also allows ventilation, as does a port side window opposite the helm. 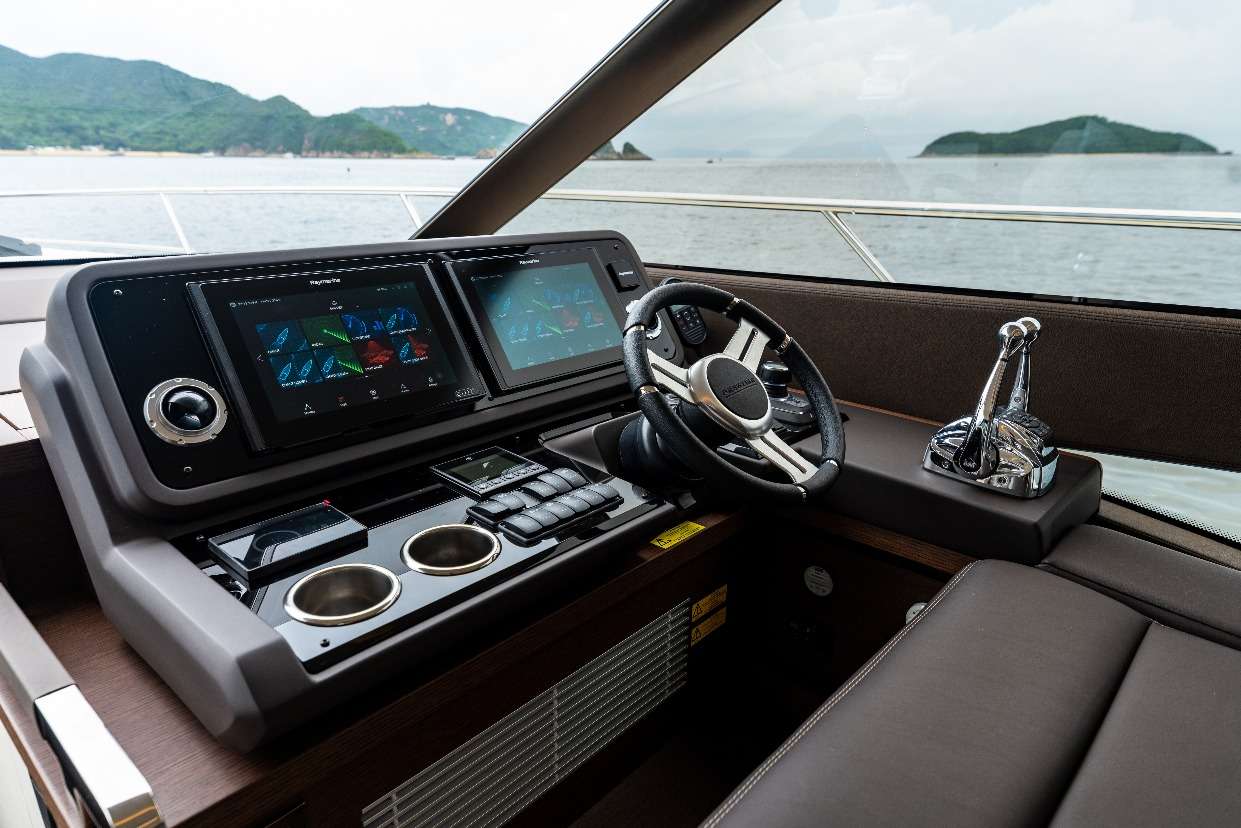 The main deck helm station also has good general visibility – when underway, it’s easy to imagine running the boat from the main deck, rather than being forced to the flybridge in order to have good visibility.

Heading below, there are VIP cabins with a clever arrangement. The VIP ensuite functions as a day head, with special access to the head via a private door. The VIP bed can be split in two if required, while the twin cabin has sliding single beds, to create a double or twins as needed. Each cabin has separate air-con controls. 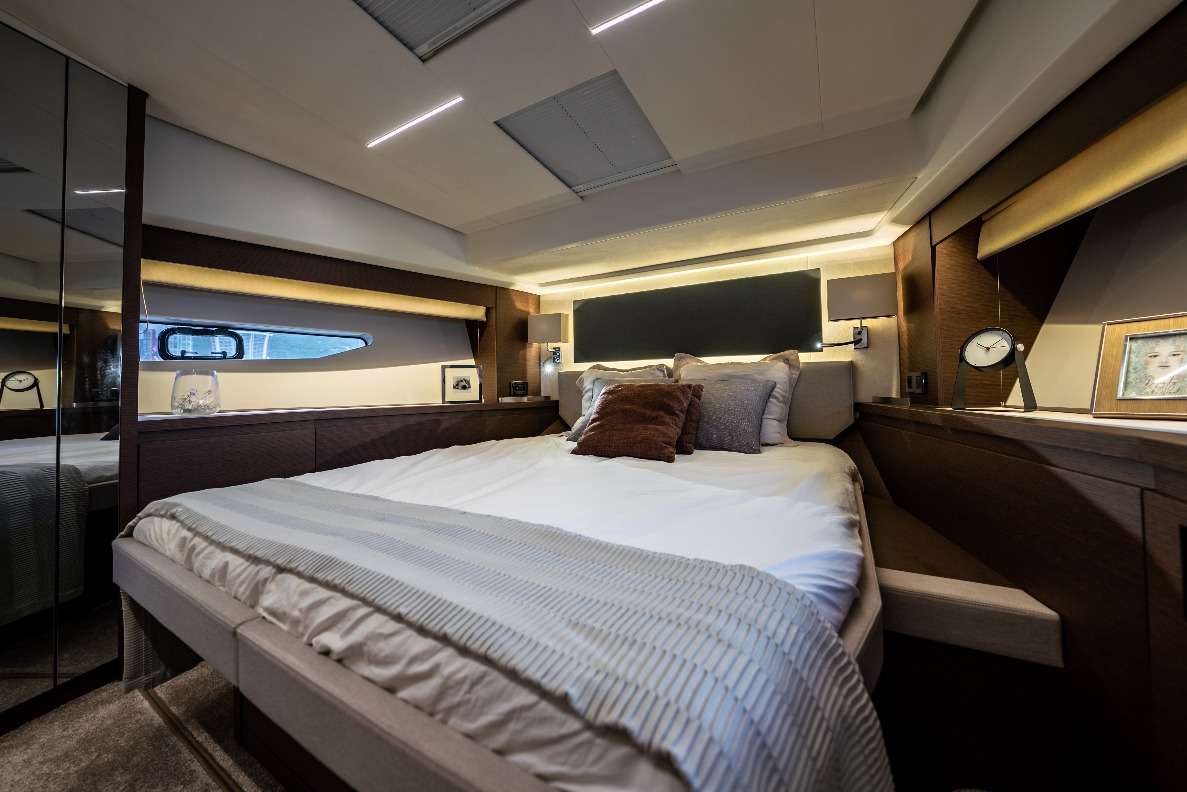 The master cabin is accessed by a starboard-side staircase, providing separate access for VIP guests and the owner. This is a nice touch, allowing easier overnighting when privacy is desired. There is also plenty of storage for clothing and other items with vanity desks in both the VIP and master cabins. The master also has a genuine walk-in closet, adjoining the master bathroom. 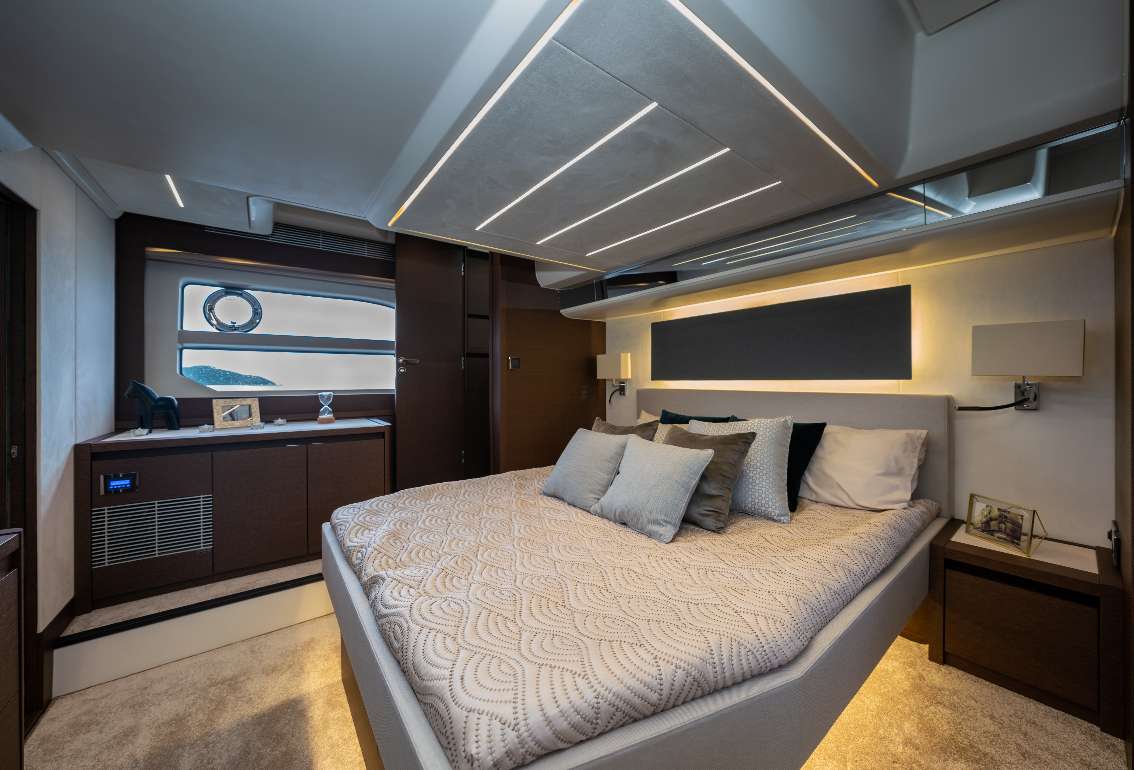 Forward, the bow area has generous sunpads and the option of a table for late-afternoon aperitifs. The bow area was kept wide, allowing for easy access to the anchor chain, windlass controls and lockers. Access to the bow is via secure walkways offering good support and handrails for safe movement. 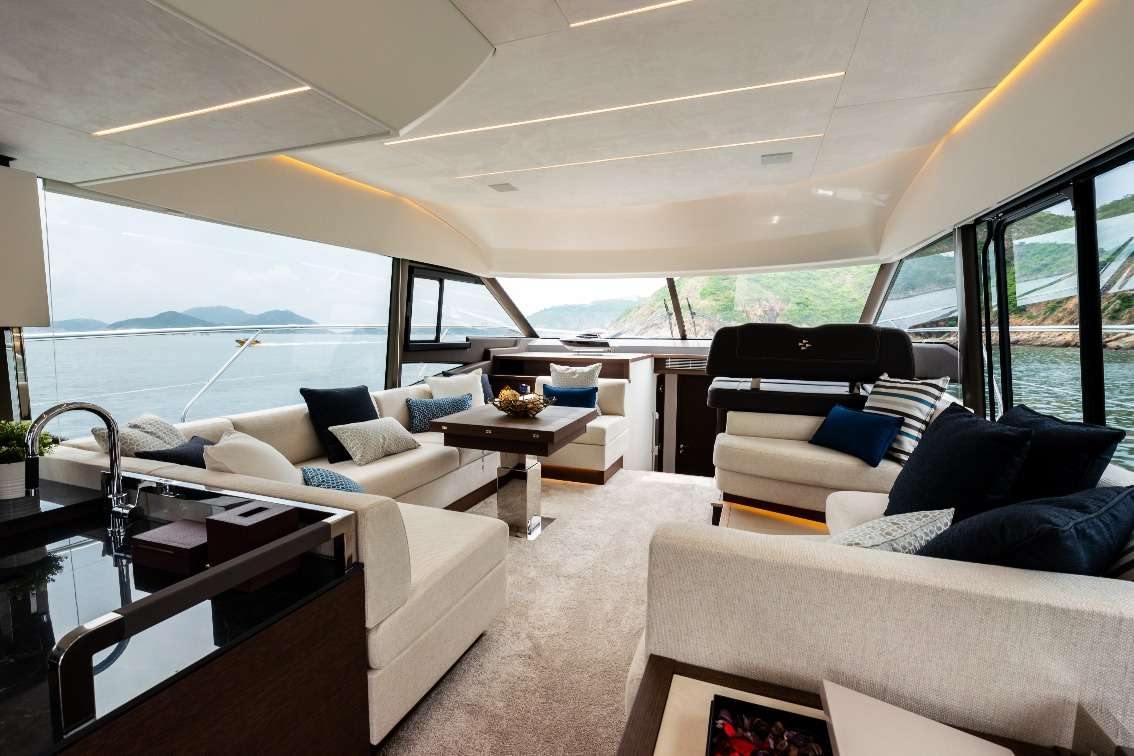 Up on the flybridge, the helm station offers good views of the port side, while a nice dining area has been created in a relatively small space. With the sunpads near the helm and the dining area behind it, there is enough comfortable seating for at least half a dozen people. A tiny but complete wet bar/mini galley has been installed just behind the helm. 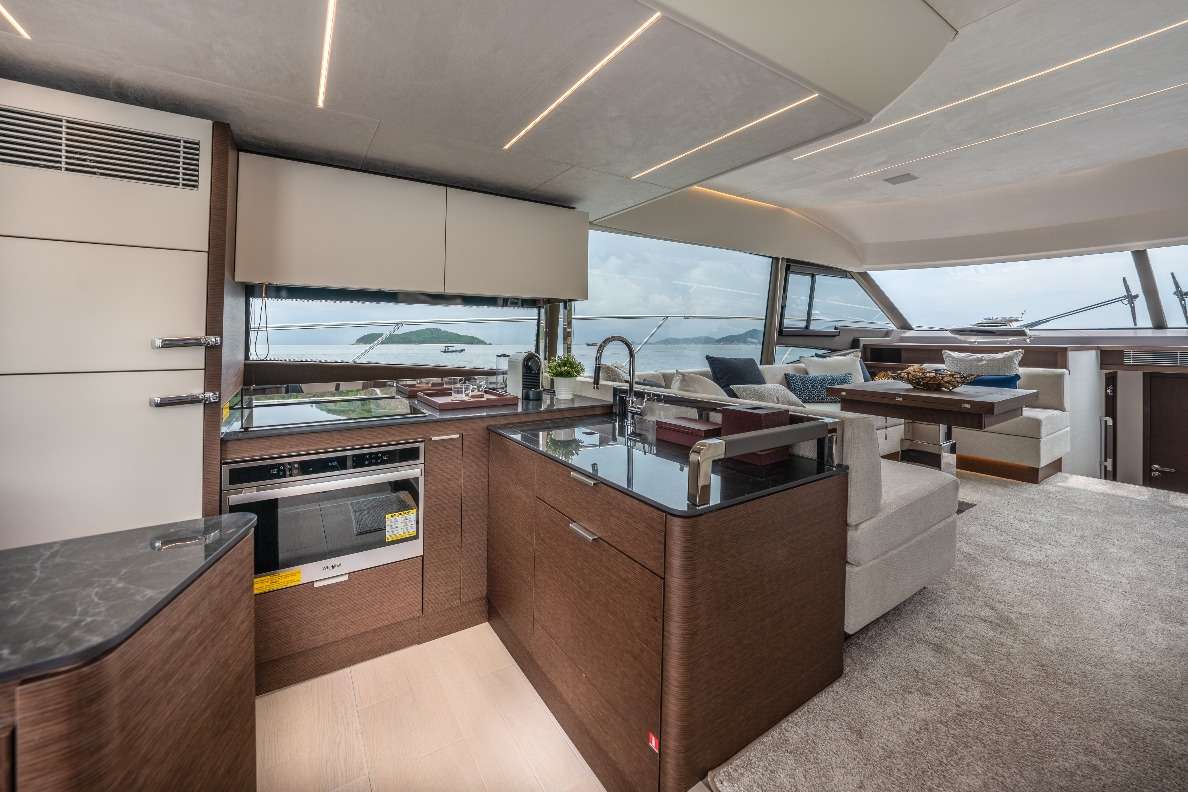 You may not get full-service meals, but there’s a small fridge, small grill and small sink, allowing snacks and cold beverages to be passed around easily. The flybridge is open as standard, with the option of either a bimini or a hardtop. 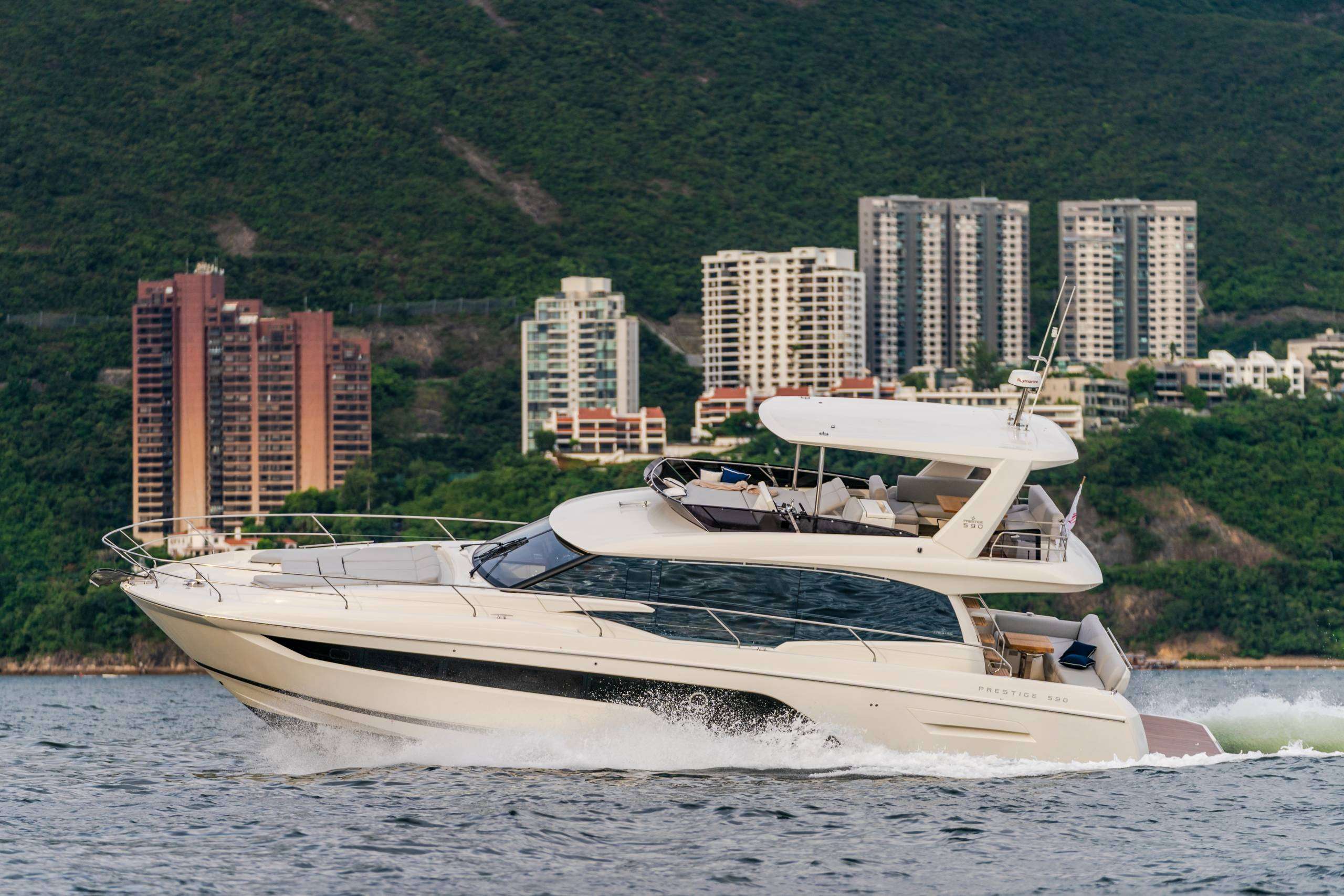 Access to the engine room is via a hatch in the aft deck cockpit, leading down to a tight but highly organised engineering space. Buyers will find in the Prestige 590 a stylish, but comfortable yacht that owners could pilot on their own.