What started as a share in a wakeboarding boat in Hong Kong turned into a superyachting adventure that has spanned Southeast Asia for over 15 years. The story of Northern Sun is nearing the end of its first chapter. The owner spoke to Asia-Pacific Boating about the charms of exploring Southeast Asia on his distinguished expedition yacht 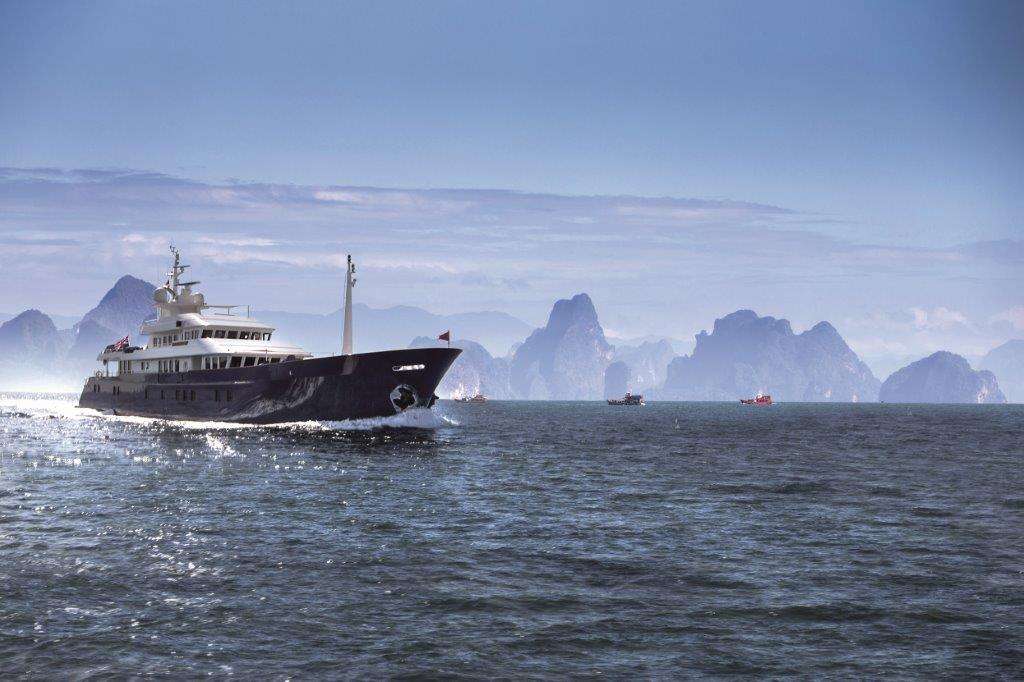 “We were drawn progressively into boating in Asia,” says the owner of the 51-metre conversion superyacht, Northern Sun. “It started with a little card tacked up on a corkboard at a supermarket. Somebody was offering a share in a wakeboarding boat in Tai Tam. I didn’t even realise you needed a boating license. We agreed to share costs with the owner, and later we bought our own wakeboarding boat.”

From then on, the owner, a Hong Kong-based businessman, got sucked into the world of Asian yachting and is only now emerging from it. “Sometimes I think about what if we hadn’t done it,” he says. “We’d have more money. That would be nice. But I feel like I wouldn’t be the same person if I hadn’t had the Northern Sun experience. It’s made me who I am, to an extent.”

For over 15 years, the owner and his family have been cruising the waters of Southeast Asia aboard Northern Sun, one of the best examples of an entirely Asian conversion expedition yacht.

In 1993, the owner moved his family to the UK, where they bought and refitted a 1907-built barge, ultimately living on it in the Thames River in London. 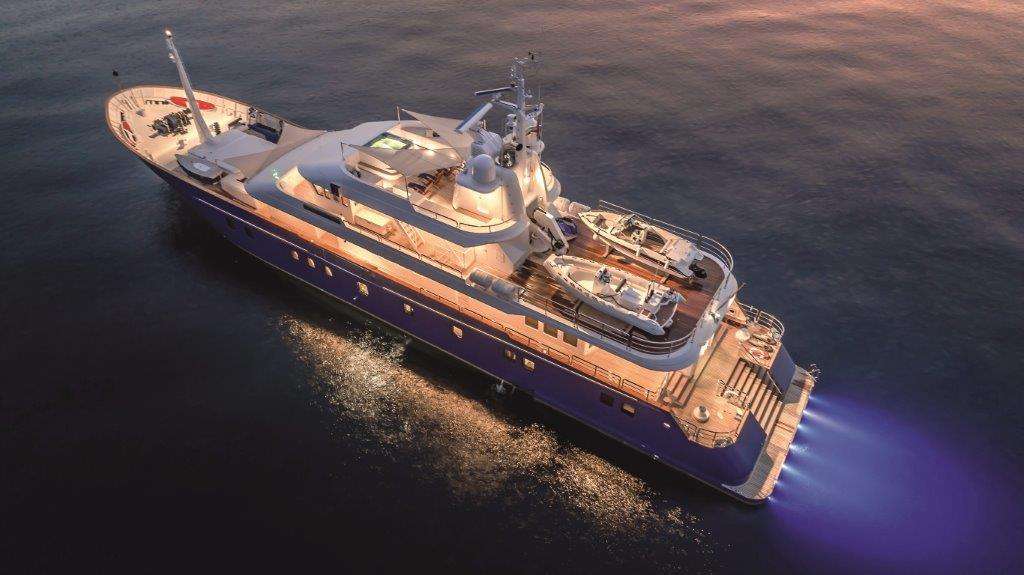 “We stumbled into that,” says the owner, who sailed the barge the length of the Thames River and even across the channel into the canal system of northern France.

“We loved that boat (and) we loved renovating it. My wife got into the pumps and generators and boilers … she loves the mechanical stuff.”

Though boating was a big part of the owner’s family history, he says he only really got into it with the barge refit project. In 2000, the barge was sold and the owner moved to Tai Tam, Hong Kong, where the lure of the sea was strong. There was the wakeboard boat, but also the desire to go further. “We got fixated on doing another renovation, something larger.” 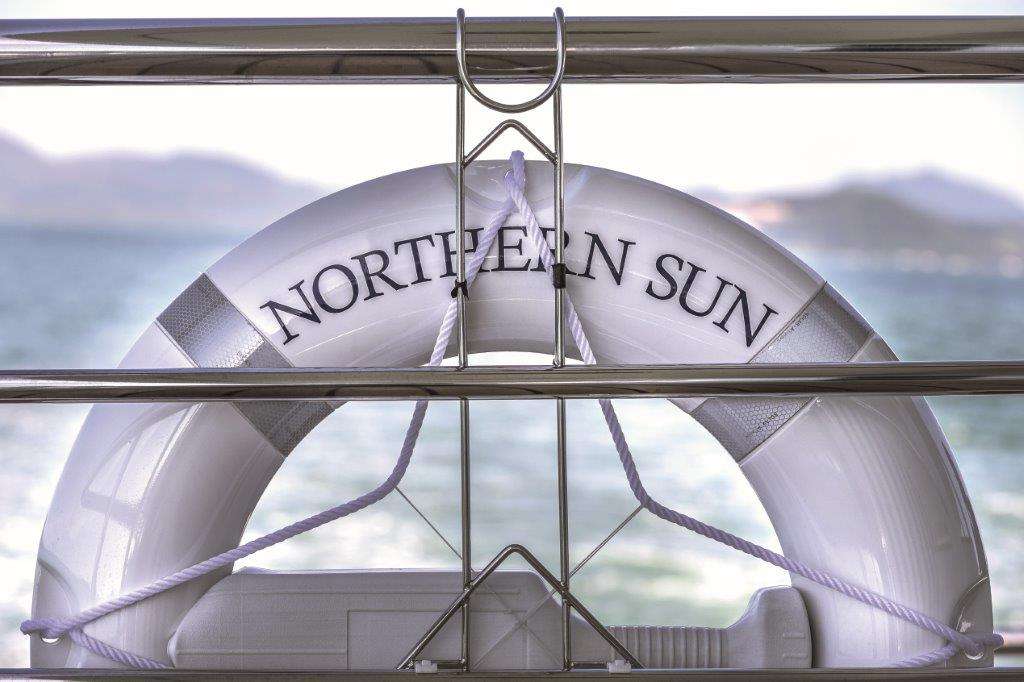 Sometimes I think about what if we hadn’t done it. We’d have more money. That would be nice. But I feel like I wouldn’t be the same person

He found a New Zealand fisherman who had acquired a former Japanese fisheries research vessel, which had been built in 1976 to withstand the rigours of the Arctic seas north of Japan. The owner flew to New Zealand and liked the ship, its “go-anywhere” capability, and the idea of the project. They acquired it in 2005.

“We saw that it could be many things. It could be a business thing for charter, which it has been. Or a place to live. We could renovate it and sell it. We loved the idea of doing another refit. We loved just finding out along the way what it could be.”

The conversion process took them from the Philippines to yards in Labuan, Singapore and finally Phuket. Along the way came expertise in the often- challenging world of yacht conversions. But what the owner and his family got from their project was over a decade of unrivalled fun and exploration in Southeast Asia.

Northern Sun reflects the owner’s interest in a life of exploration, taste for relaxation and affinity for antiques. There are antique Persian carpets, plus carpets from around the world, with textiles and old ships’ paintings adorning the saloon and cabins. A 100-year-old ship’s clock, which rings out the dog watch – the wee hours of the morning when four-hour shifts are cut to two hours – can be found onboard. 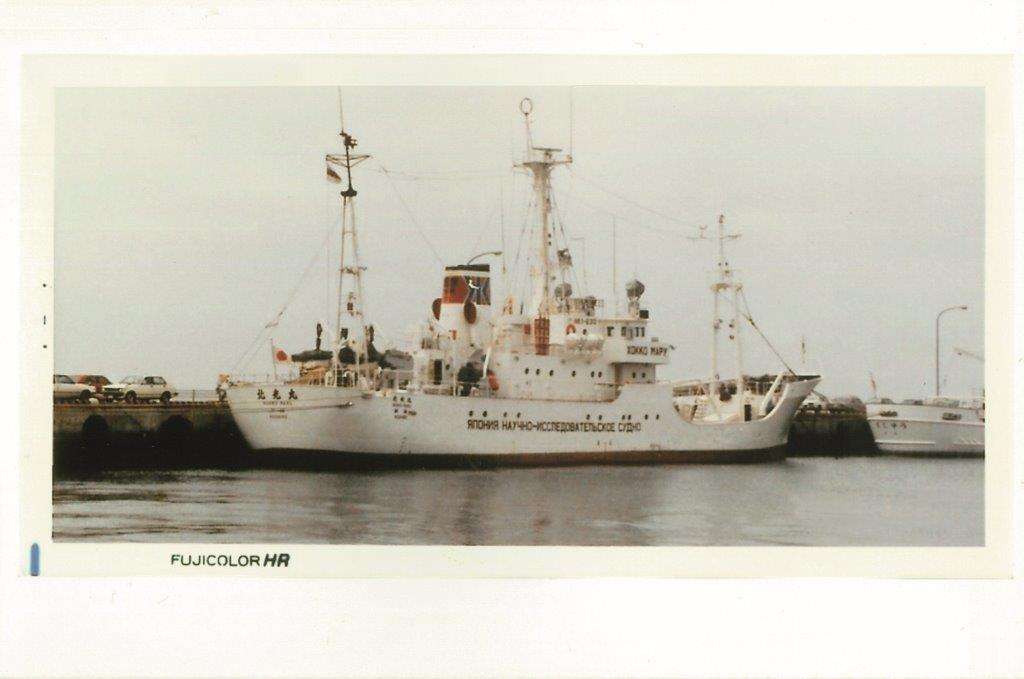 Northern Sun before her incredible conversion, as a Japanese fisheries vessel

The artwork is a key feature. Some of the paintings that hang onboard have been in the owner’s family for decades. They sit alongside old pictures of merchant ships that plied the South China Sea in the 19th century. There are classic travel posters from the first part of the 20th century. There are ship models, acquired at auction from numerous places. “I’m crazy about them,” the owner admits.

“We’re kind of stuck in the past. We like old things. We like transforming things. We like unique things.” The boat’s layout was handled mainly by the owner’s wife, who wanted all the guest cabins to be on the lower deck, and all the public guest spaces on one level.

At first, the yacht was based in Hong Kong, which introduced the owner and his family to the seaborne side of the city. It was a blessing to get away from stock tickers and terminals and find some peace offshore, according to the owner. But it was difficult finding space for a 51-metre yacht, so the boat was moved to Phuket’s Yacht Haven, where it has been based ever since. 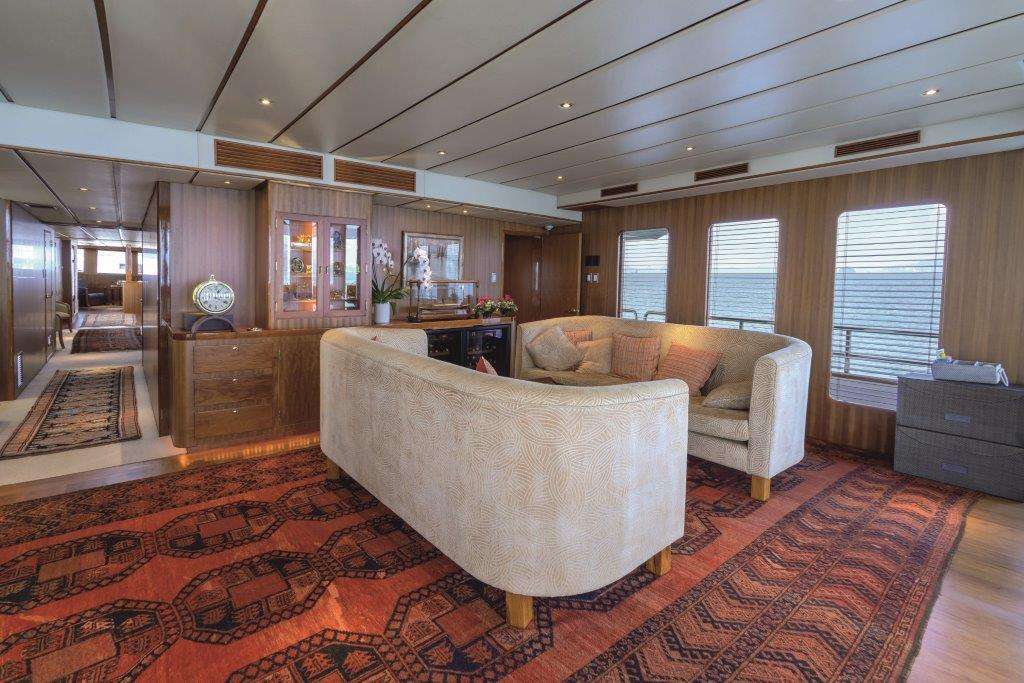 Northern Sun’s interior was made open and convivial, with artwork everywhere

The change of location brought the owner and his family to the next stage of their journey – putting Northern Sun’s long range and expedition credentials to work exploring Southeast Asia. “Once we had Northern Sun in Phuket, it was like discovering a new world with new possibilities,” he says. “Initially, we’d just be sitting in the jacuzzi with a glass of rosé wine and having a nice meal of Thai prawns, and then we started to say, ‘Hey, where do we go from here?’”

Yacht Haven is located at one corner of Phang Nga Bay, which is ringed by mangrove swamps. The first thing the owner and his family did was get kayaks and paddle to a nearby mangrove forest. “(They) are so cool… I’ll go to any mangrove swamp,” he says. In Phang Nga Bay, karst mountains, which rise dramatically from the flat plains, have mangrove swamps right at the base. “It’s kind of eerie, like moving through a dark forest.”

From Phuket, there were weekend trips to Langkawi. Then as the owner and his captain got bolder, there were trips up to the far reaches of Myanmar and around the Andaman Sea. There was the thrill of being the first to visit small islands with tiny fishing villages or finding great scuba diving spots. 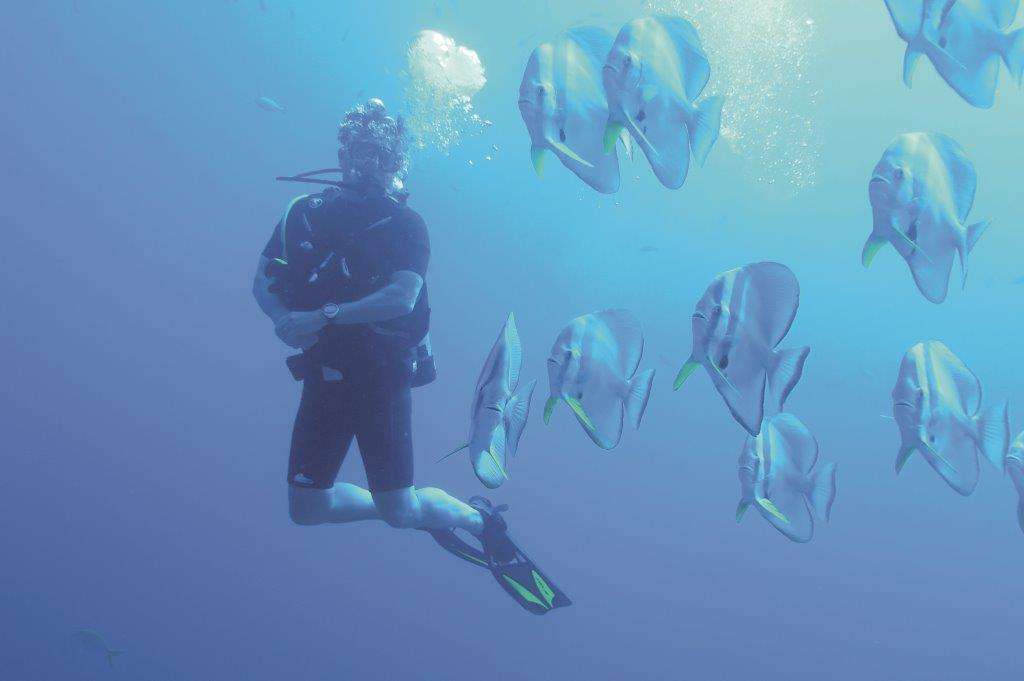 Diving at Richelieu Rock in the Andaman Sea

We’d be sitting in the jacuzzi with a glass of rosé wine and having a nice meal of Thai prawns, and then we started to say, ‘Hey, where do we go from here?

With every adventure, there was always the thought of the next destination. A visit to Penang led to a plan to visit Borneo. A trip to Sumatra encouraged a trip to the Komodo National Park.

The list of sights and discoveries is long: visiting the Moken boat people in Myanmar aboard their floating homes; delivering school supplies to remote villages in the Mergui Archipelago; exploring primaeval lagoons; watching a family of Komodo dragons devour a water buffalo; scuba diving through island tunnels in the Andaman Sea; bartering for handicrafts with locals near the Mentawai Islands off Sumatra; scuba diving around the famed Richelieu Rock; taking Northern Sun’s tender upriver in Phang Nga Bay; the sleepy fishing villages of the Anambas Islands of Indonesia; sailing past Semeru, the tallest volcano on Java; and haggling over fresh fish with local fishermen in Borneo. 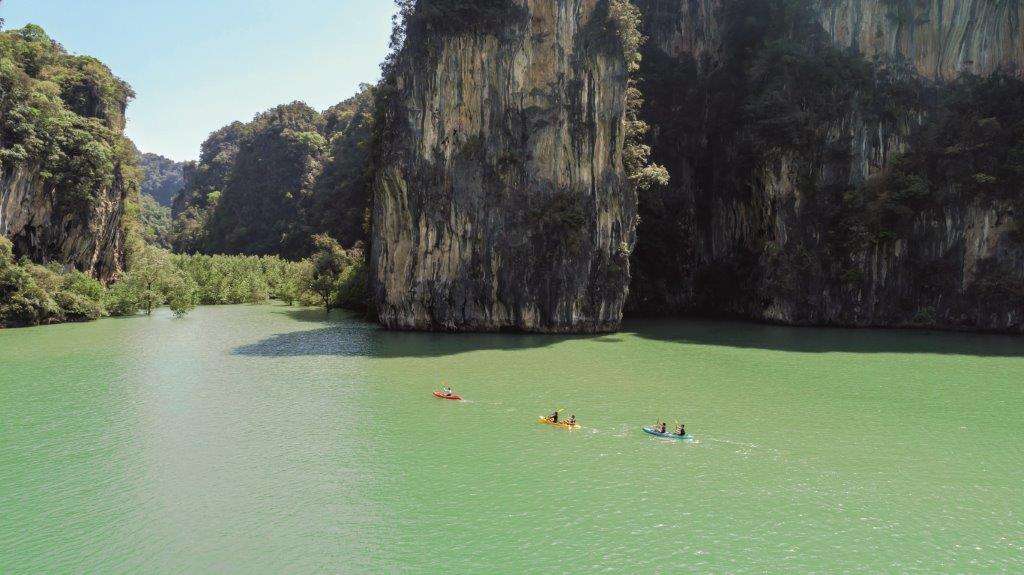 Kayaking into the mangroves around Phang Nga Bay

The owner recalls how he was motoring past a Moken boat in the RIB. The Moken are a tiny population of just a few thousand people left, living a hunter-gather life. The Moken are so closely tied to the sea that their children can see better than normal people underwater, to aid in foraging for food.

A local guide was with him, and the owner asked if the Moken people would be interested in a chat. The guide translated as the owner joined the locals with beer and water in hand. He found that the Moken people will spend just a month out of the year on land. The rest of the time they are on the water, catching fish or turtles.

“It was fascinating to see. What a window into a world that we knew nothing about,” he says, adding he has since read even more on the Moken, whose traditional way of life is under perpetual threat. 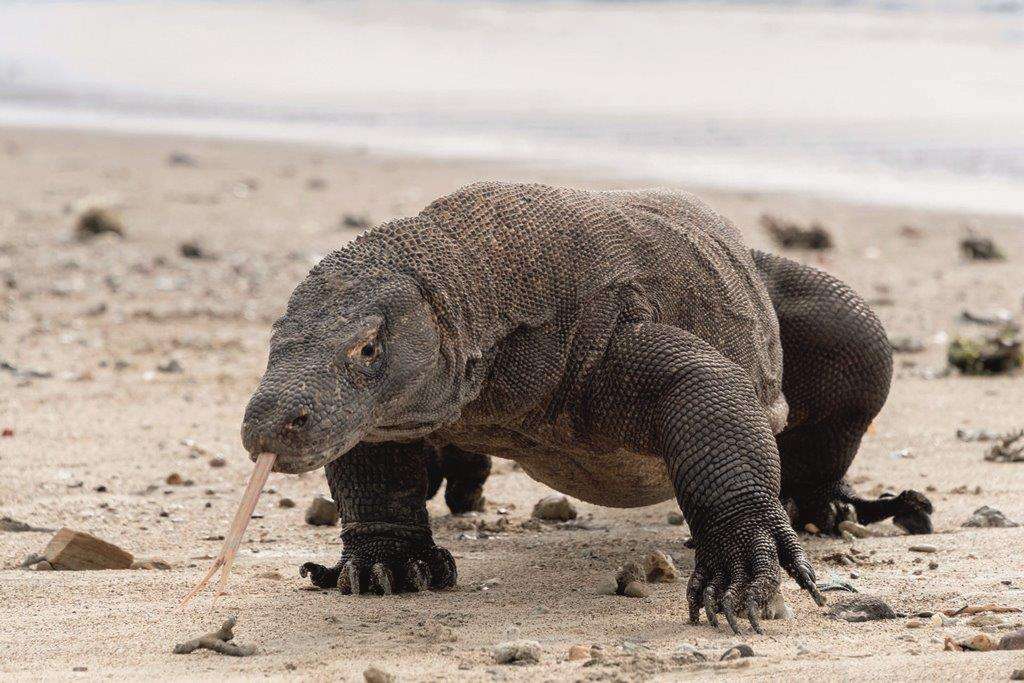 With every adventure, there was always the thought of the next destination. A visit to Penang led to a visit to Borneo. A trip to Sumatra encouraged a trip to the Komodo National Park

While owner and wife have been focusing on their cultural adventures and explorations, their kids have been busy accumulating toys such as Seabobs, Laser sailboats, wakeboards and more.

After so many years and places exploring in Southeast Asia, the owner has been left only with the desire to do more. Despite seeing so many places in Indonesia, he says there are still many places left to explore. The South Pacific, with its far-flung islands and coral reefs, also beckons. 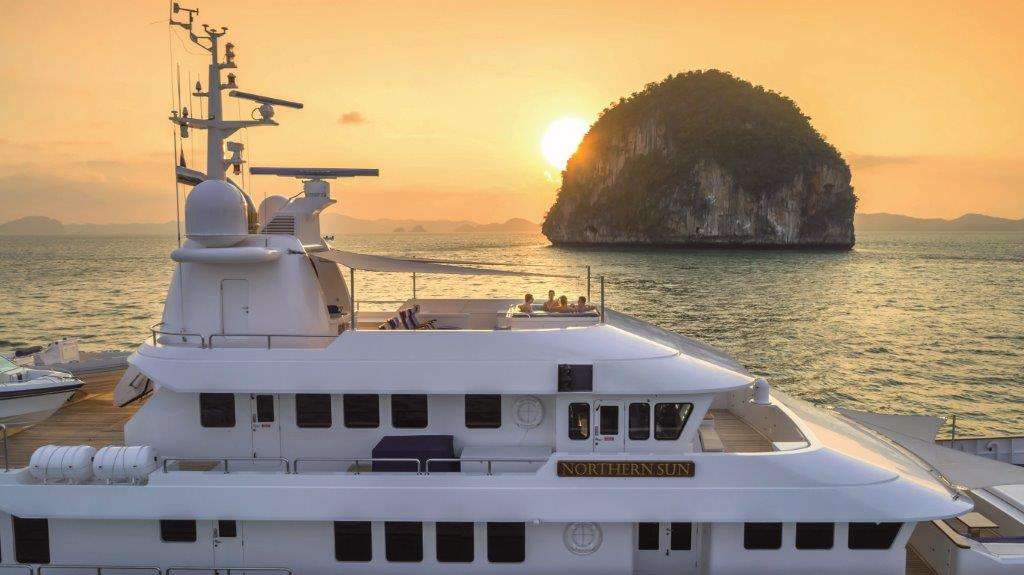 “What I have learned is that you never get satisfied. You can always go deeper into the places you know and farther afield to places you don’t know. It’s not just about having fun. It’s about seeing how people live in places that you might not otherwise get to.”

Along the way, Northern Sun has had just two captains since her conversion, with the new captain having piloted the yacht for over a decade. The chief engineer has been with the boat for 15 years. “We are in a world that is characterised by pretty high staff turnover,” he says, adding that he and his family like keeping the crew the same. “We respect the people who work for us. I think I can say we’ve got a collection of people who like the vessel, who like the history.” 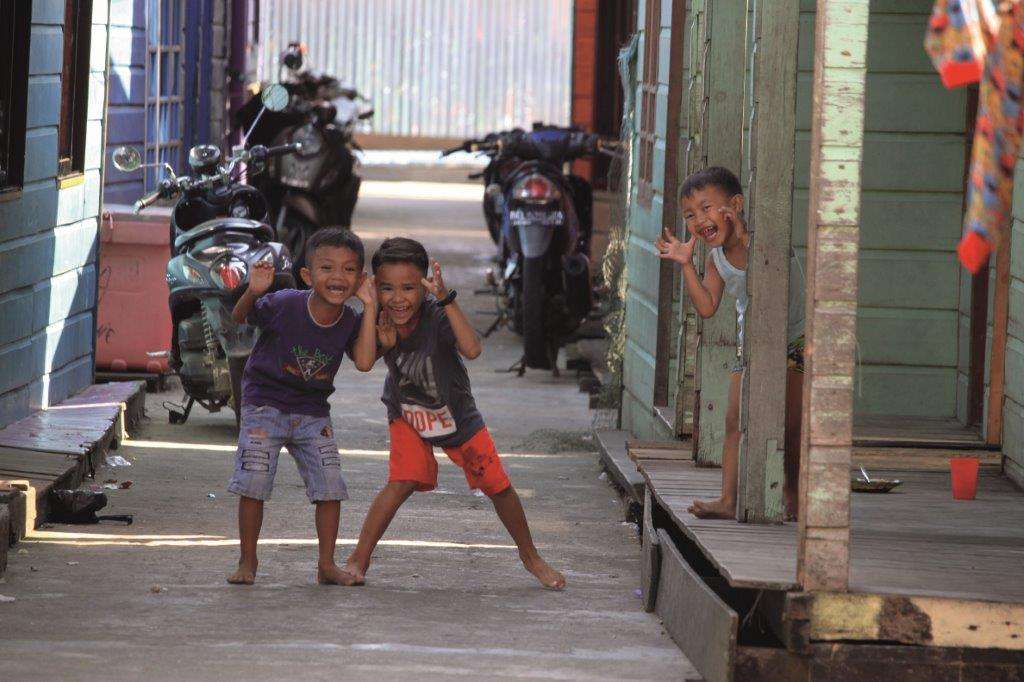 At long last, Northern Sun is now for sale, and the owner and his wife are currently restoring another yacht in the UK.

The owner is thrilled with his new project but leaving Northern Sun won’t be easy. “To have a vessel where you can invite family and friends and go off and do things that nobody has done before, or show people cool new stuff… I will miss everything. I’ll miss amazing Thai meals on the aft deck. I’ll miss the sunsets, and I’ll miss all the dopey fooling around on Seabobs and surfboards. There’s nothing I won’t miss.”

Boating in Borneo: Take a cruise on the wild side

Asia’s largest island is quickly developing into a sailor’s dream, with new marinas that grant access...