Here is a running list of the latest Russian oligarch-owned superyachts that have been seized, after sanctions were levied following the invasion of Ukraine 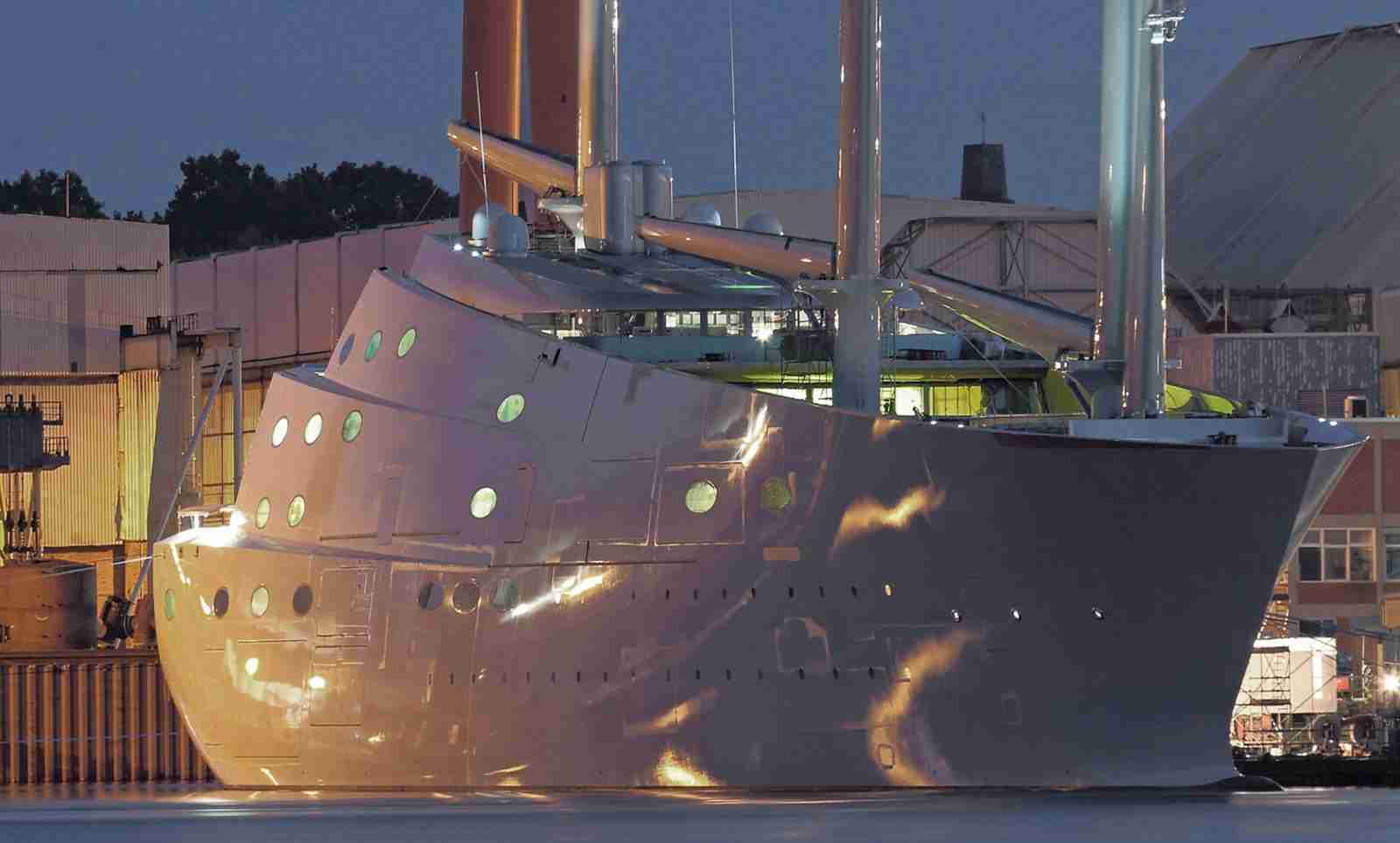 The world’s largest sail-assisted superyacht, Sailing Yacht A was impounded in Italy on March 12

A large number of superyachts owned by Russian oligarchs have been detained so far in Europe, after sanctions were levied following the invasion of Ukraine. Here is a running list of the latest seizures, in descending chronological order:

April 14: Amadea, a 106-metre Lürssen superyacht with a dedicated party deck, is arrested by police in Fiji, two days after arriving in the country. The yacht is owned by Russian billionaire Suleiman Kerimov, who is sanctioned by the United States, Britain and the European Union.

Fiji Police Force confirmed they had arrested the US$325 million superyacht, with crew members being questioned in police custody over failure to secure customs clearances. Brigadier-General Qiliho told the Fiji Sun that the yacht had allegedly anchored within Fiji’s Exclusive Economic Zones (EEZ) before getting the necessary customs clearance.

#LOCALNEWS A superyacht belonging to a Russian billionaire sanctioned by the USA, United Kingdom and Europe came into port at Lautoka yesterday. #TimesNews #FijiNews #Amadea https://t.co/HdPTfP1SOf

April 6: Customs authorities in the Netherlands impound 14 superyachts linked to Russia, 12 of which are currently under construction.

While there are no Russian-owned yachts over 35 metres anchored in the country, foreign minister Wopke Hoekstra highlights that many superyachts are being built and serviced in the Netherlands. Five shipyards are impacted by the move, and all are currently cooperating fully with the sanctions.

More investigations are currently ongoing at fifteen shipyards and five yacht dealers in the Netherlands.

A video published by Spain’s Guardia Civil (below), shows FBI agents boarding Tango as the news broke. The DOJ claims the vessel’s ultimate owner is the Renova Group head Viktor Vekselberg, who is on the US sanctions list. The DOJ states that Vekselberg has deliberately hidden his ownership of Tango in the past. Tango is the first yacht to be impounded by the United States.

March 29: Russian-owned Phi was detained in London’s Canary Wharf financial district, mere hours before it was set to leave, following a superyacht awards ceremony. It was the first ship to be detained in the UK since sanctions against Moscow were introduced.

The 58.5-metre Phi, valued at £38m, has a freshwater swimming pool and an “infinite wine cellar” according to builder Royal Huisman.

The ownership of the yacht was deliberately well hidden. The company the ship is registered to is based in the islands of St Kitts and Nevis and it carried Maltese flags to hide its origins.

UK Transport Secretary Grant Shapps said the owner is not currently sanctioned but is a businessman who has “close connections” to Vladimir Putin. 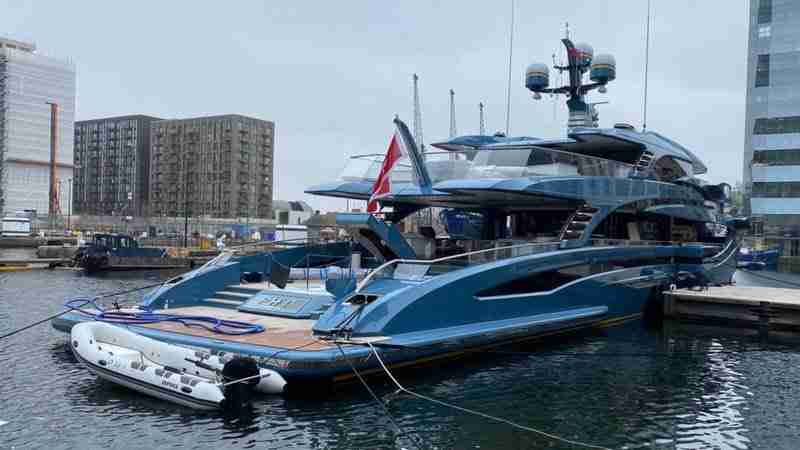 March 21: Authorities in Gibraltar seized 72-metre Axioma, which is believed to belong to Dmitry Pumpyansky, head of Russia’s largest steel and pipe manufacturer TMK. He was added to the UK and EU sanctions list in March. In a statement, the Gibraltar government said given the ultimate beneficial ownership of the vessel, permission would not normally have been granted for it to enter British Gibraltar Territorial Waters. However, following consultation with the Minister for Sanctions, the Captain of the Port allowed entry “in the interests of creditors with proper claims against the vessel.” The US$75m is reportedly the subject of arrest action by JP Morgan in the Supreme Court of Gibraltar. 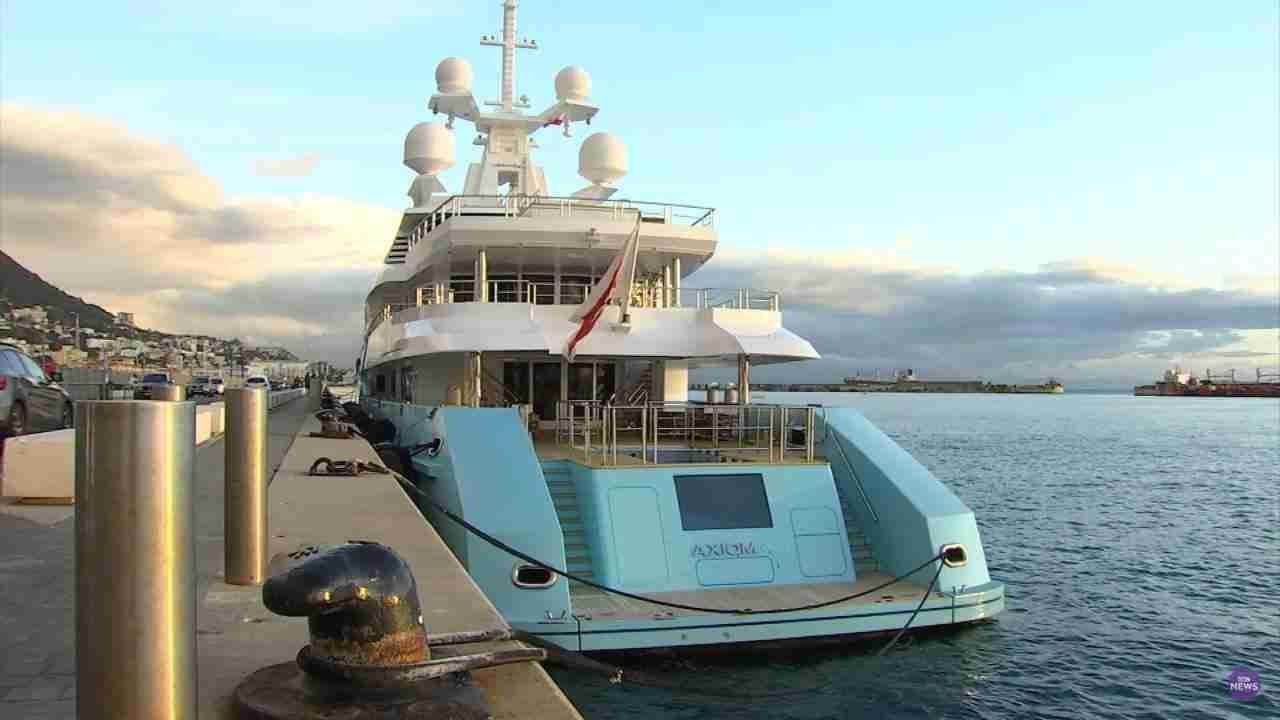 March 16: Croatian authorities seized the 92m superyacht Royal Romance, which is worth US$200m, at the port of Rijeka. The vessel is reported to belong to pro-Kremlin Ukrainian billionaire Viktor Medvedchuk, who fled house arrest in Ukraine when the war began.

March 16: Spanish authorities impounded the 135-metre megayacht Crescent, which had been docked in a port in Tarragona in the northeastern Catalonia region. While Spain’s transport ministry said further actions are pending an inspection to establish its exact ownership, Crescent is widely reported to be linked to Igor Sechin, the former deputy prime minister of Russia and chief executive of Russian oil giant Rosneft. This is the second Sechin yacht that has been seized, after French authorities impounded 86-metre Amore Vero on March 3. 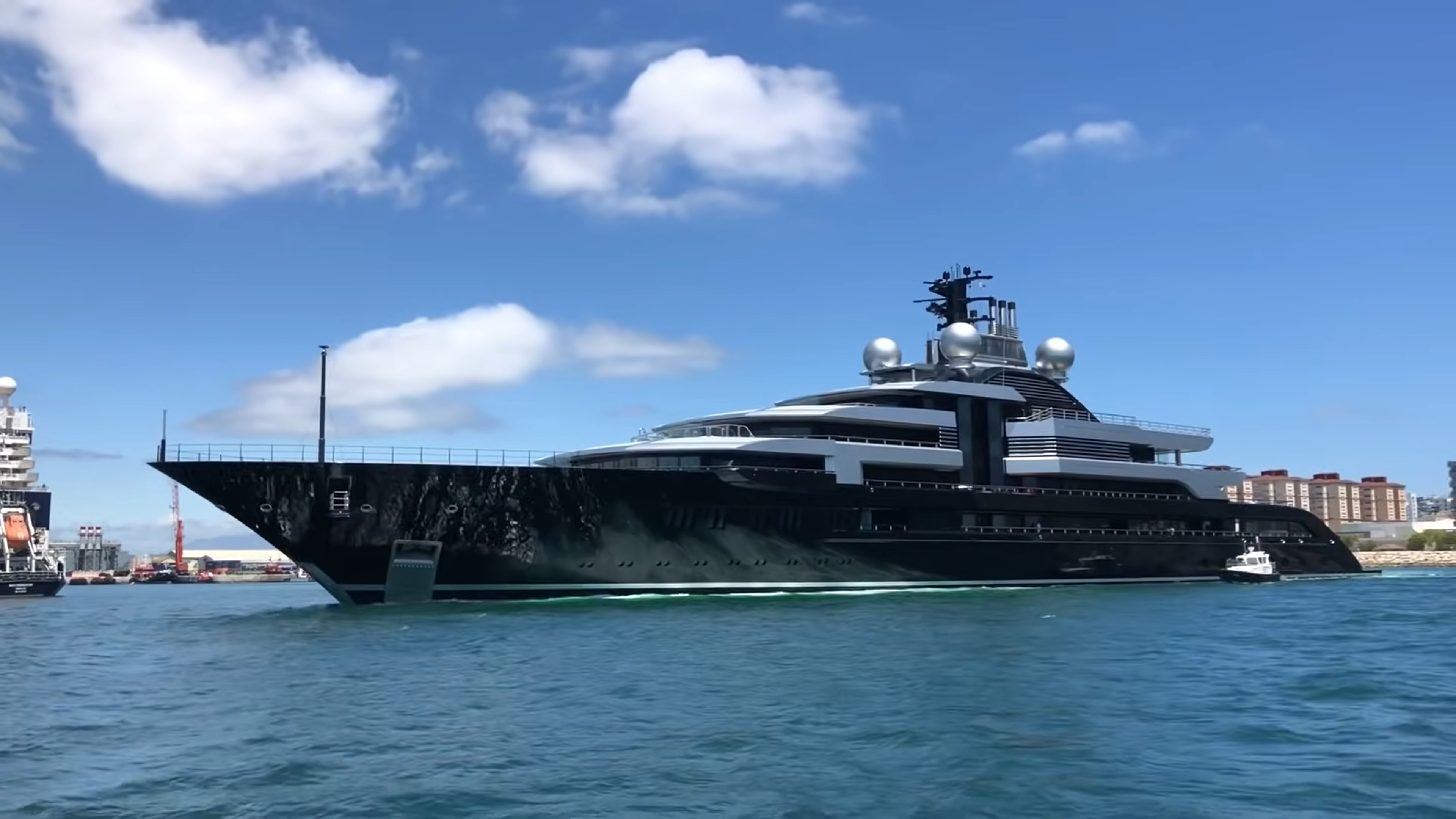 March 15: Spanish authorities detained the 48-metre superyacht Lady Anastasia in Mallorca. The vessel is understood to be owned by oligarch Alexander Mikheyev who is the head of Russia’s defence import agency. Earlier in the month, a Ukranian crew member had attempted to sink the vessel in an act of protest, claiming that Mikheyev had sold weapons that were used to attack Ukraine.

March 14: Valerie, a US$140 million superyacht reportedly linked to Sergei Chemezov, the CEO of Rostec, is detained by Spanish authorities in Barcelona. The country says it is confirming its ownership and keeping the yacht in detention in the meantime. Chemezov is also understood to be a former KGB colleague of Vladimir Putin.

March 12: The world’s largest sail-assisted superyacht, Sailing Yacht A was seized in the Port of Trieste, Italy, by police. The 143m yacht designed by Philippe Starck is worth around US$580m and is owned by Russian oligarch Andrey Melnichenko.

Italy’s financial police (@GDF) has just frozen “SY A” – a sailing yacht worth ~€530m located in the Port of Trieste. The yacht could be linked indirectly to Andrey Igorevich Melnichenko – an individual in the EU sanctions list. pic.twitter.com/fRg6ZTIQRH

March 7: The 96-strong crew of US$600m superyacht Dilbar, owned by oligarch Alisher Usmanov, were dismissed after sanctions made it impossible to pay their wages. At 156metres and 15,917 tons, Dilbar is said to be the largest yacht in the world by gross tonnage. The yacht is currently sitting in dry dock in a shipyard in Hamburg, Germany. A small crew employed by German shipbuilder Lürssen will look after the “safety and security” of the ship.

On April 12, German authorities formally impounded Dilbar. Germany’s federal police tell media that: “through extensive investigations despite offshore concealment,” it has discovered that the yacht is owned by Gulbakhor Ismailova, the sister of Usmanov. 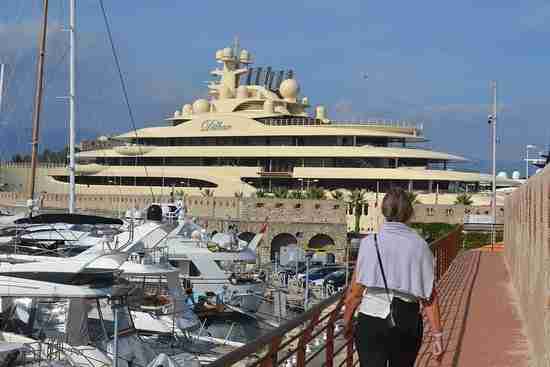 March 5: Lena, a 40m superyacht built by Sanlorenzo, was seized by Italian police in Portosole Sanremo. The yacht has been connected to Gennady Timchenko,  a shareholder of Bank Rossiya and founder of investment firm Volga Group.

March 4: The 65-metre Palmer Johnson superyacht Lady M was seized in the port of Imperia in northern Italy. Alexey Mordashov, who is the richest man in Russia and the chairman of Severstal is reportedly the owner. 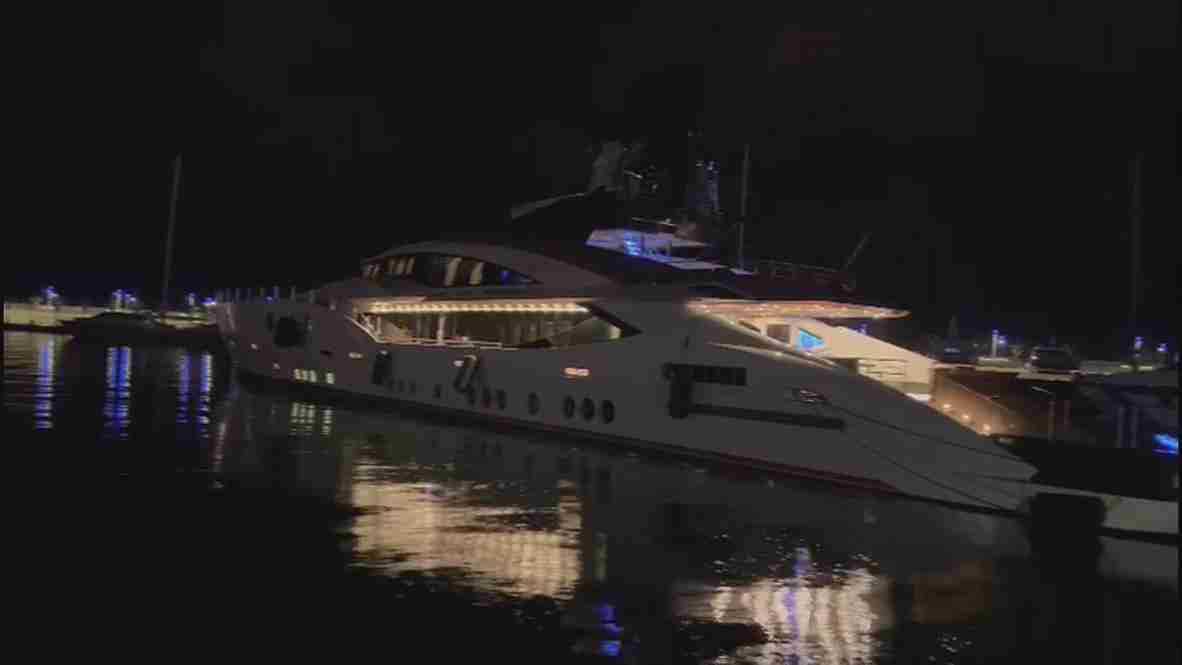 March 3: French authorities seized 86-metre Oceanco superyacht Amore Vero in the port of La Ciotat. This yacht is linked to Igor Sechin, who is also understood to be the owner of Crescent, a superyacht later sanctioned on March 16. Meanwhile, one of several yachts that are believed to be owned by Vladimir Putin — Graceful — arrived in Kaliningrad, Russia, shortly before the Ukrainian invasion began. The ship reportedly departed from Hamburg, where it had been undergoing repairs, in a hurry.

NEWS: A new satellite photo shows a $100 million yacht “Graceful” believed to be owned by Vladimir Putin at port in Kaliningrad- safely shielded from Western sanctions.