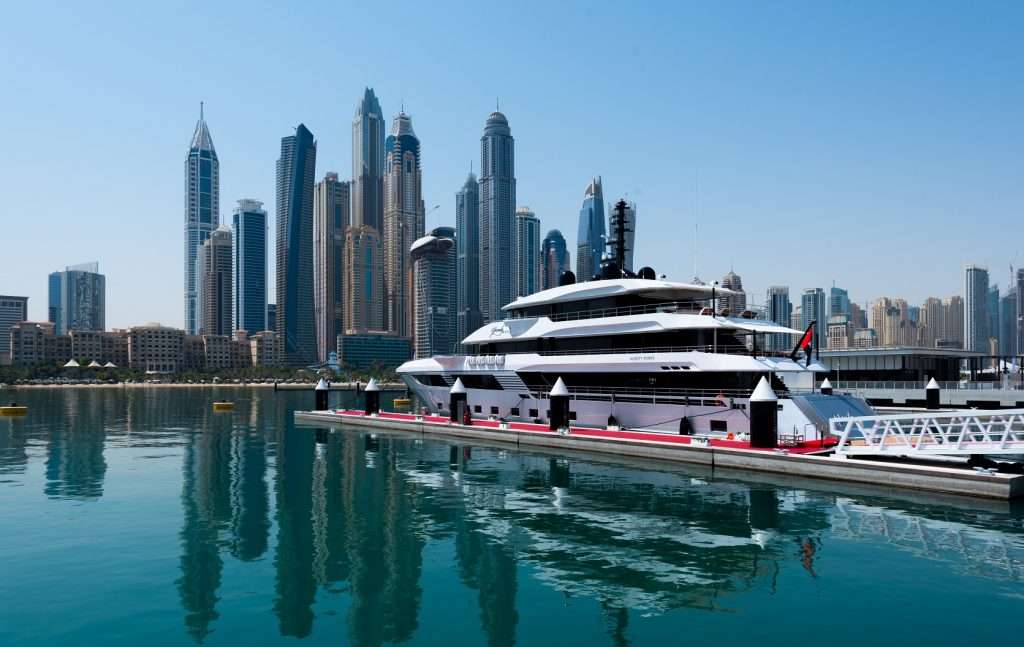 UAE-based Gulf Craft has premiered its new flagship superyacht, the Majesty 175, for the first time at Dubai Harbour.

The 54-metre superyacht, which was first announced at Monaco in 2016 and launched in November 2020, successfully completed her maiden sea trial in January. The Majesty 175, which has been sold to a prominent UAE businessman, is now the world’s largest composite production superyacht. She is also the first “megayacht” from Gulf Craft, and the builder’s largest yacht to date.

The premiere event, which welcomed high-ranking Emirati officials and dignitaries to tour the yacht, was organised in partnership with Dubai Tourism. The emirate city, which has refrained from strict travel restrictions and been a very popular tourist destination during Covid, is placing increasing emphasis on its appeal as a yachting hub.

Built on reclaimed land, and located between Bluewaters Island and Palm Jumeirah, the marina covers an area of almost 2 million square metres, and is now the Middle East’s biggest marina.

The sprawling development offers 1,100 berths for yachts up to 160m, as well as offering dining, retail, luxury hotels, residences, and an observation deck with panoramic views. 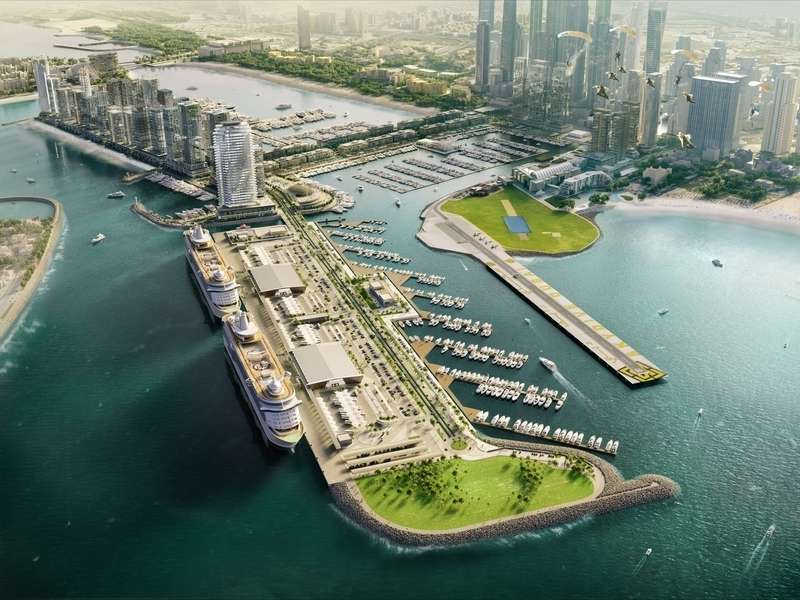 Ahead of the premiere, Gulf Craft chairman Mohammed Alshaali said the Majesty 175 demonstrates Gulf Craft’s capability to manufacture world-class vessels that are built entirely in the UAE.

“The Majesty 175 cements the reputation of Gulf Craft as a leader in the global yachting industry and underlines the nation as a leading yachting destination,” said Alshaali. “We create exceptional vessels that will delight yachting enthusiasts across the world. Gulf Craft invested nearly four years of effort in building this vessel, quicker than the normal timeframe, despite the challenges of the pandemic. With the regional premiere of the Majesty 175 at Dubai Harbour, we are reiterating the appeal of the country as a full-fledged yachting destination.” 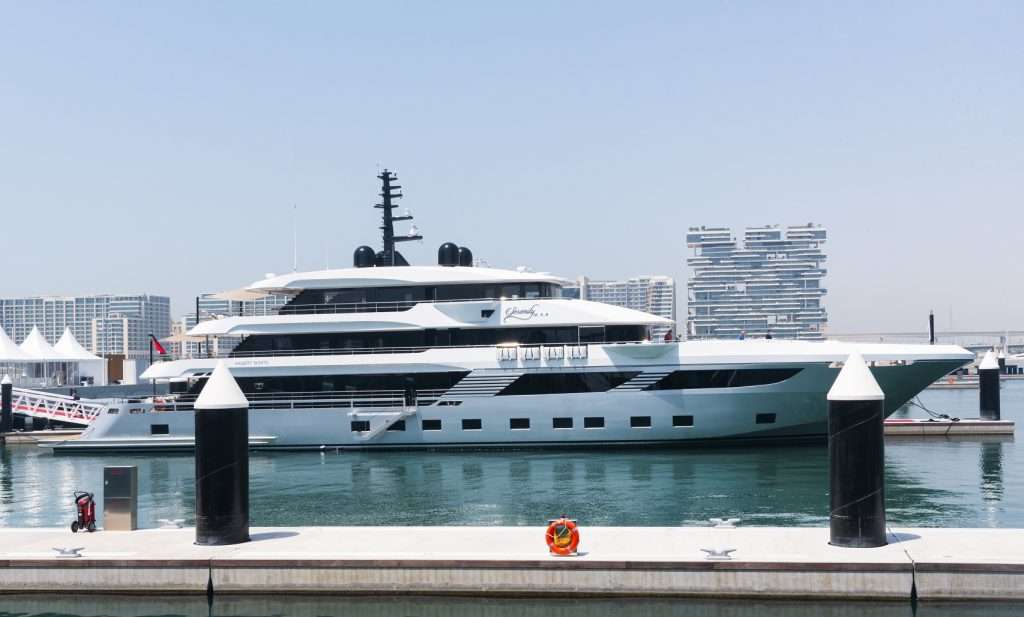 Ahmed Al Khaja, CEO of Dubai Festivals and Retail Establishment added: “We are honoured to be associated with the launch of this unique superyacht, a testament to Dubai’s reputation as a global city and its ability to make significant progress across various sectors in spite of the tough times.”

The Majesty 175’s exterior and interior design are by Cristiano Gatto Design Studio in Italy, while the naval architecture is by Massimo Gregori of the Yankee Delta Studio. 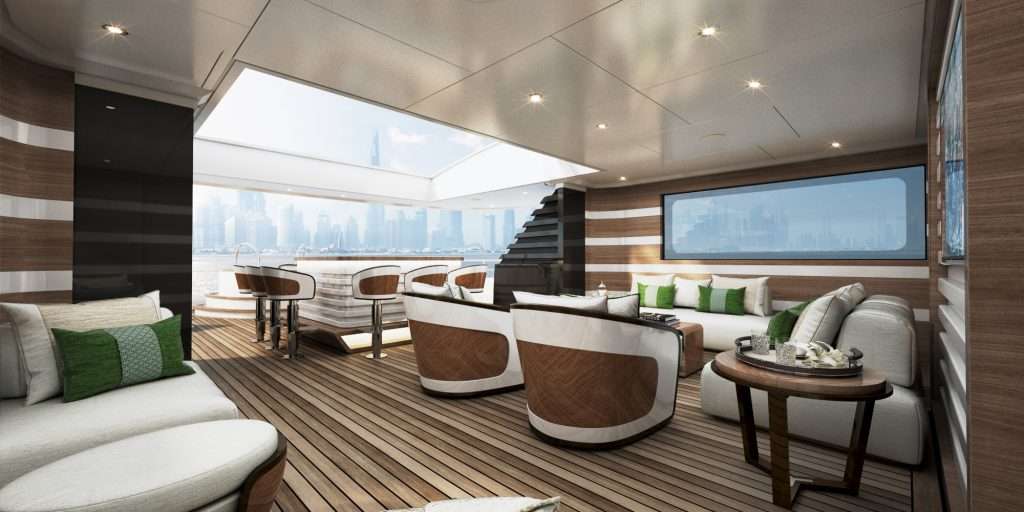 Thanks to construction from advanced composite materials such as carbon fibre and vinyl ester, the 780GT yacht draws just 2.05m of water, and can cruise low-draft areas and offers close beach access.

Stand-out features include a 5-metre infinity pool at the forward deck and a hybrid skylounge that can be converted to an open sun deck. 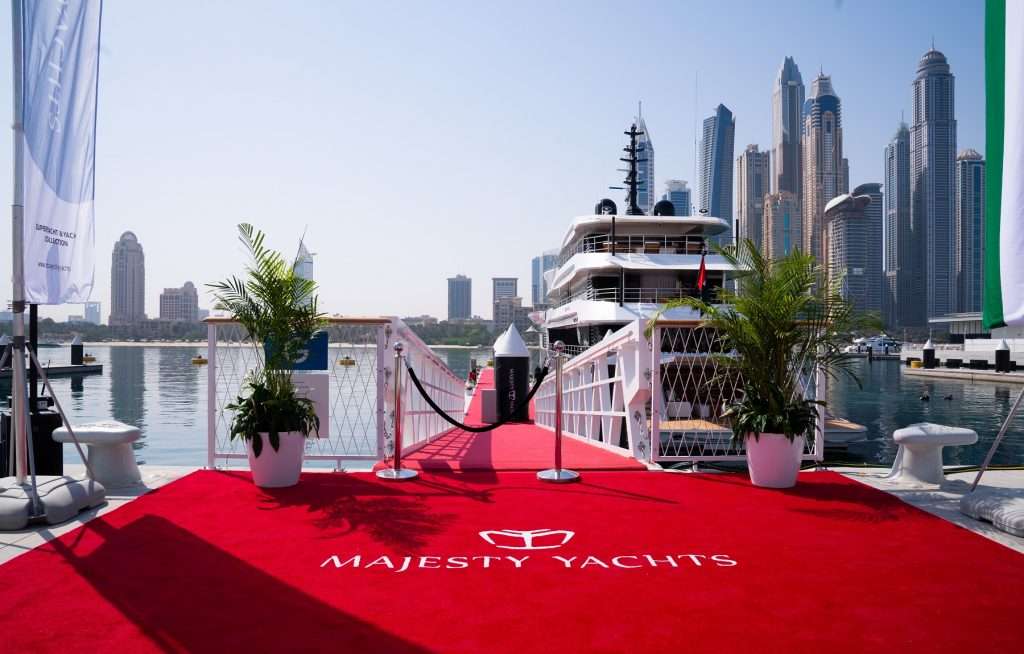 She accommodates seven lavish staterooms and can host a crew of up to 10, with six crew cabins and a private captain’s accommodation.