Silent Yachts' new flagship Silent 100 Explorer, which was unveiled at Cannes Yachting Festival 2021, will be delivered in 2023 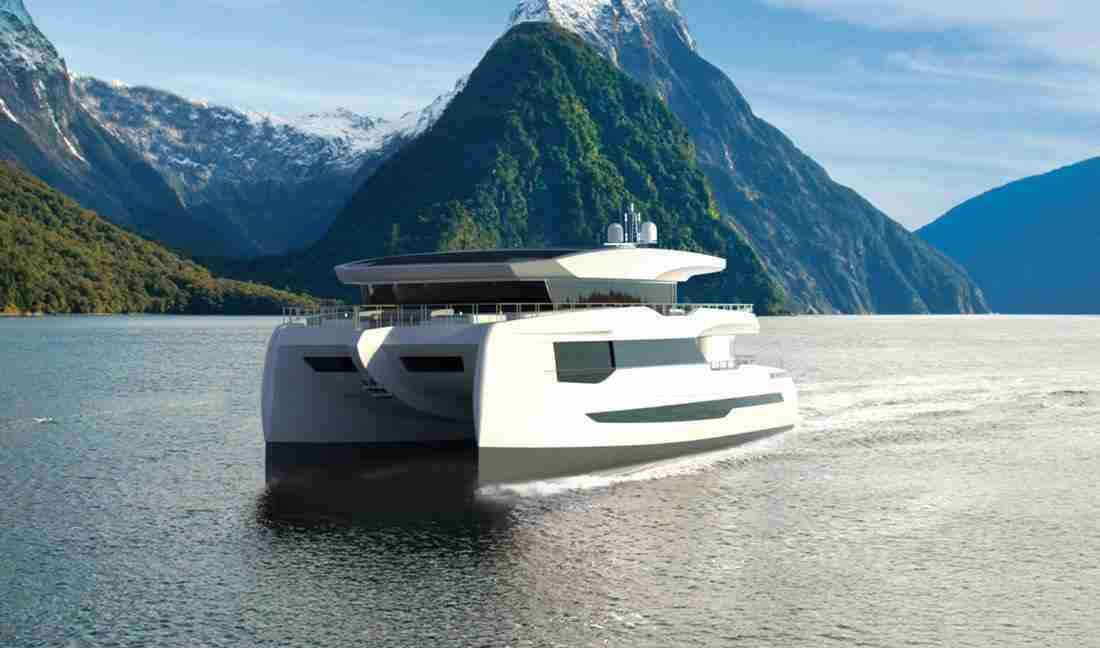 Austrian-owned Silent Yachts, a¬†global leader in solar-electric catamarans, has sold the first unit of its new flagship model, the Silent 100 Explorer. The 31-metre solar-powered catamaran was first unveiled at the 2021 Cannes Yachting Festival¬†and the first unit will be delivered to its owner in 2023.¬†

“This new sale coming after the sale of three of our 80-foot models in rapid succession and confirms the market’s interest in the superior comfort of catamarans and solar energy for propulsion needs, as well as all the household appliances on board,” says Silent Yachts founder and CEO, Michael K√∂hler.

Like all Silent yachts, the four-deck Silent 100 Explorer has a solar-electric drive train that operates at near-silence and is designed to have worldwide cruising capabilities. (The brand’s first solar-powered production boat, Silent 64, crossed the Atlantic ocean in January 2018).¬† 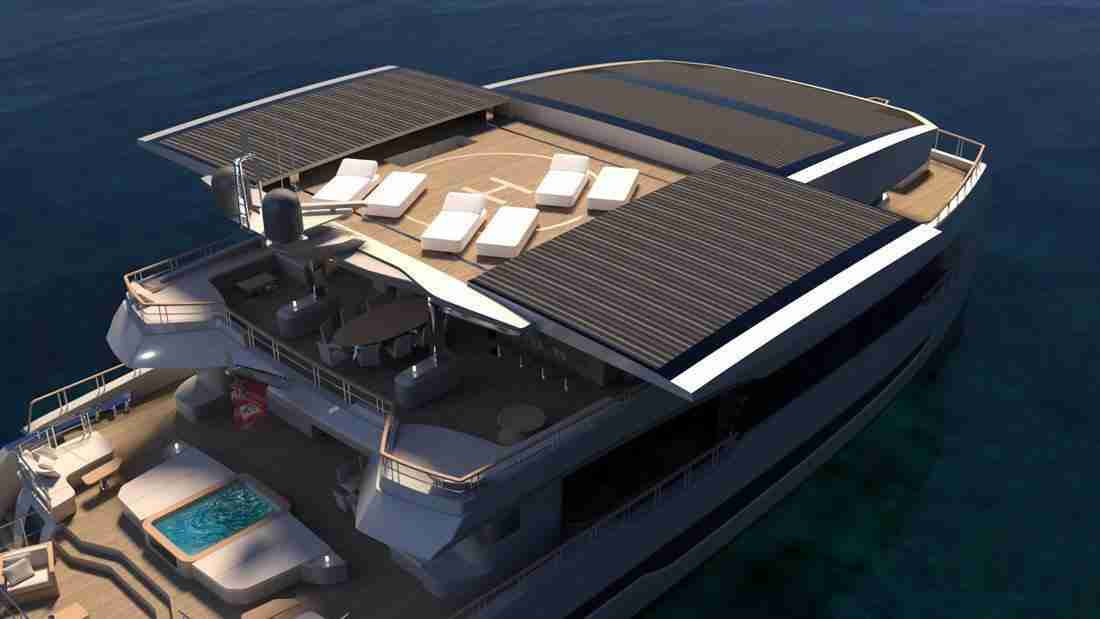 This generous space – typical for multihulls – means that the Silent 100 Explorer boasts five ensuite guest cabins on the main deck and in the starboard hull, in addition to a full-beam master stateroom with private office on the main deck forward.

Renewable electric energy on the Silent 100 Explorer comes from an array of solar panels in the hardtop that slides apart to reveal a sundeck that can also serve as a touch-and-go helipad.¬†

The solar cells provide up to 40kWp (kilowatt ‘peak’ power output) and clean solar electrical energy is stored in a battery bank with a capacity of up to 800 kWh. Coupled to twin 340kW (@700 rpm) electric motors, the Silent 100 Explorer has an economic speed of 6-8 knots, a cruising speed of 10 knots and a top speed of 14-16 knots. 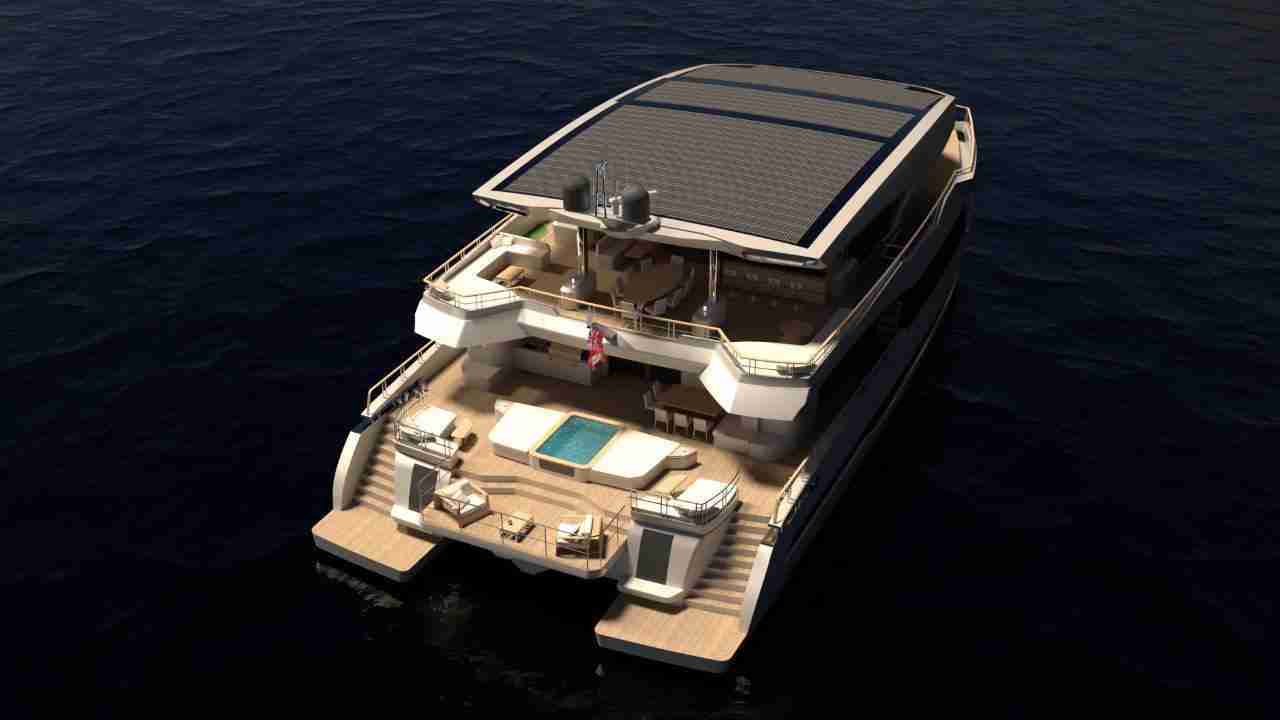 Two or three diesel generators, depending on the specification, provide backup auxiliary power. In theory, the Silent 100 Explorer has an unlimited range as solar is renewable.

“The Silent 100 Explorer is a great challenge proving that the solar revolution of Silent Yachts to the superyacht level,” said designer Marco Casali. “The kind of available spaces, fully customisable from the clients, will allow unique internal and external spaces not even achievable on much bigger superyachts like owner’s quarters or large saloons.”

Highlight features on the model include an open aft deck with hot tub, sky lounge and bar and space under sliding solar panels that can be used for helicopter operations or as a gym. There is a dedicated spiral staircase for the crew, to avoid disturbing guests.¬†

There is even room for a 7.5-metre limo tender garage between the two hulls, and a smaller crew tender and toys in a side-loading garage in the portside hull.

“The sheer amount of family-friendly space aboard the Silent 100 Explorer has to be experienced to be believed,” says K√∂hler.