The world’s largest and most diverse offshore fleet will gather in August for the Rolex Fastnet Race, when 453 yachts leave the shores of England to arrive in France for the first time ever. Veteran sailor and journalist Kevin Green breaks down the action for 2021’s biggest regatta. Yacht buyers will also have the chance to see how several new brands of one-designs will handle the challenge 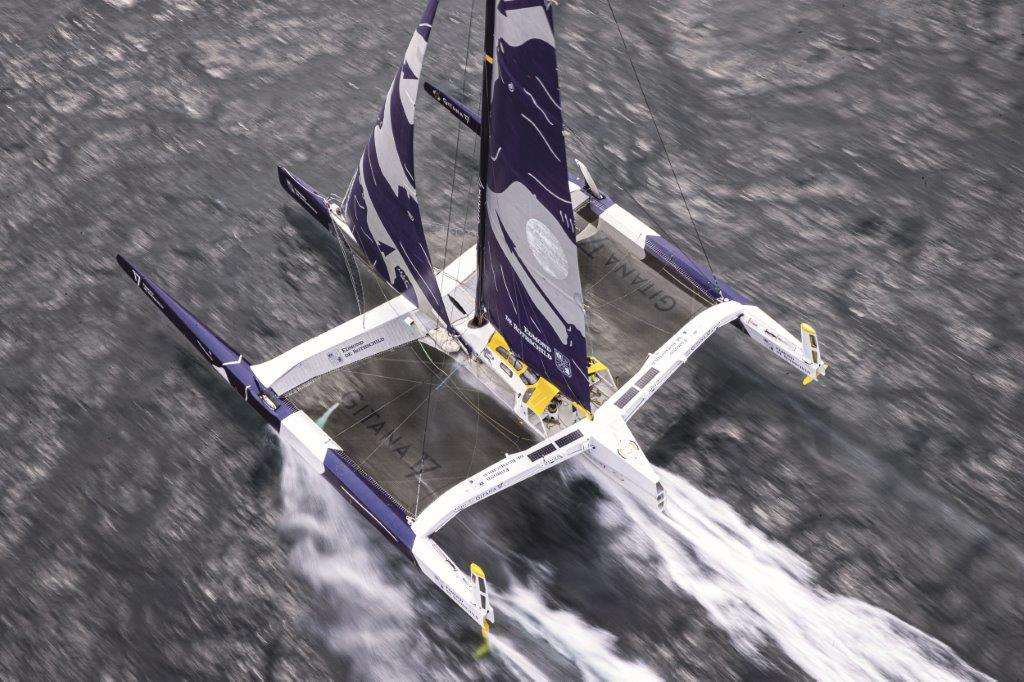 After a year of quietude, regattas are back.

As one of the big three blue water classic races, along with Australia’s Sydney-Hobart and America’s Bermuda race, the Fastnet is often the testing ground for new yachts and crews with global prospects in mind. Multihulls are barred from the Hobart and have only recently been allowed into the Bermuda race. The Fastnet therefore appeals to a very diverse group of sailing yachts, with foilers, multihulls and double-handed racers all in contention.

If ever there was a race that pitted everything against everything, it is this.

As the fastest offshore yachts in the world, the 100-foot Ultime trimarans gather like giant spiders in search of prey. Their main aim at Fastnet is to test their equipment before record-breaking attempts around the world and trophies such as the Jules Verne.Behind them comes the world’s largest monohulls, many now sporting foils to raise them above the waves when conditions allow.

Yet another specialist fleet are the double-handers: two-person yachts, which are the strongest growing fleet because of likely Olympic participation in 2024. And just like the proverbial pyramid, the base is where the vast number of yachts are. These are family-owned cruiser-racers that range from classic previous winners such as Contessa 32s to production favourites like the Beneteau First 40s and many more. 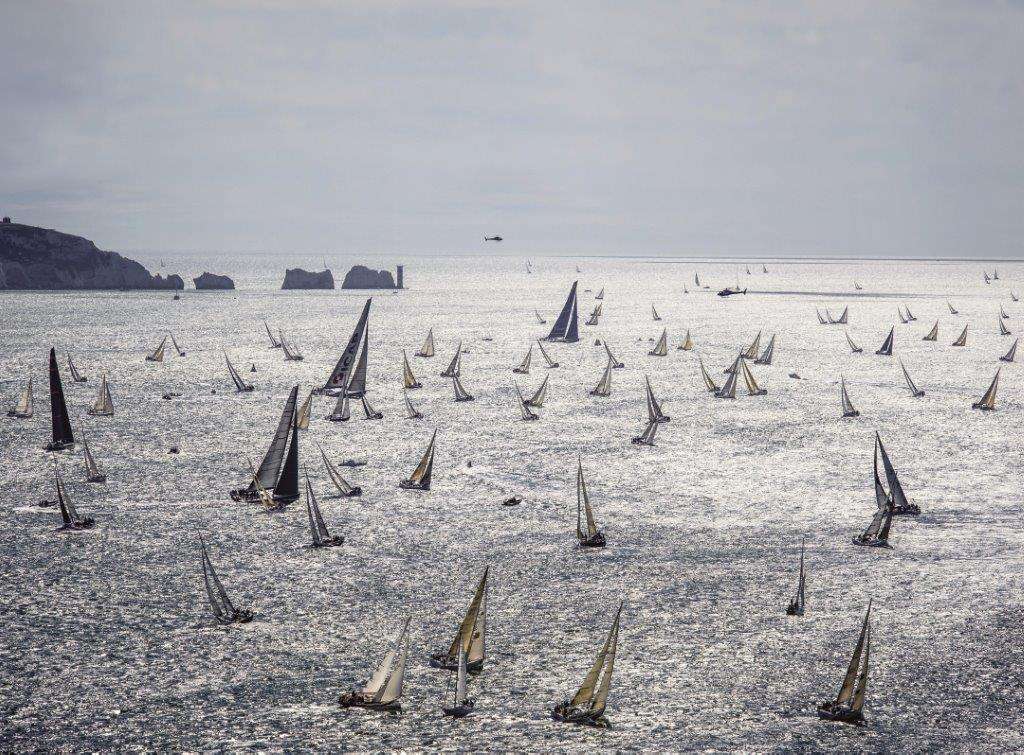 The start of racing at the 2019 Fastnet race, off Cowes, UK

A historic decision to change the course to a finish in France, a first in the history of the 96-year race, will see navigators and tacticians scratching their heads and sailing masters changing their suite of sails. The new course will increase the downwind sailing and extend the course by 90 miles to 695 miles total.

The course will have the fleet depart the Solent to race west to Ireland’s Fastnet Rock then return further south-east along the English Channel to the French port of Cherbourg. The change recognises the large number of European continental racers and France’s influential offshore racing scene.

In the last event in 2019, French yachts won nine of the ten classes. Although the race was won overall by the American Volvo 70 Wizard, overall IRC honours went to French yachts in the three editions before.

The fastest at Fastnet

While the Vendée Globe grabbed headlines over the past winter with a record fleet of 31 boats, France boasts an even more extraordinary fleet – the Ultimes. Developed over the last 30 years by teams attempting to break the non-stop round the world record – the Jules Verne Trophy – these giant 32-metre long by 23-metre-wide flying multihulls are the world’s fastest offshore racing yachts by far. Incorporating huge stability, gained from the width of the three hulls and now with reduced drag, thanks to foils, these yachts can do 50 knots and perhaps more. 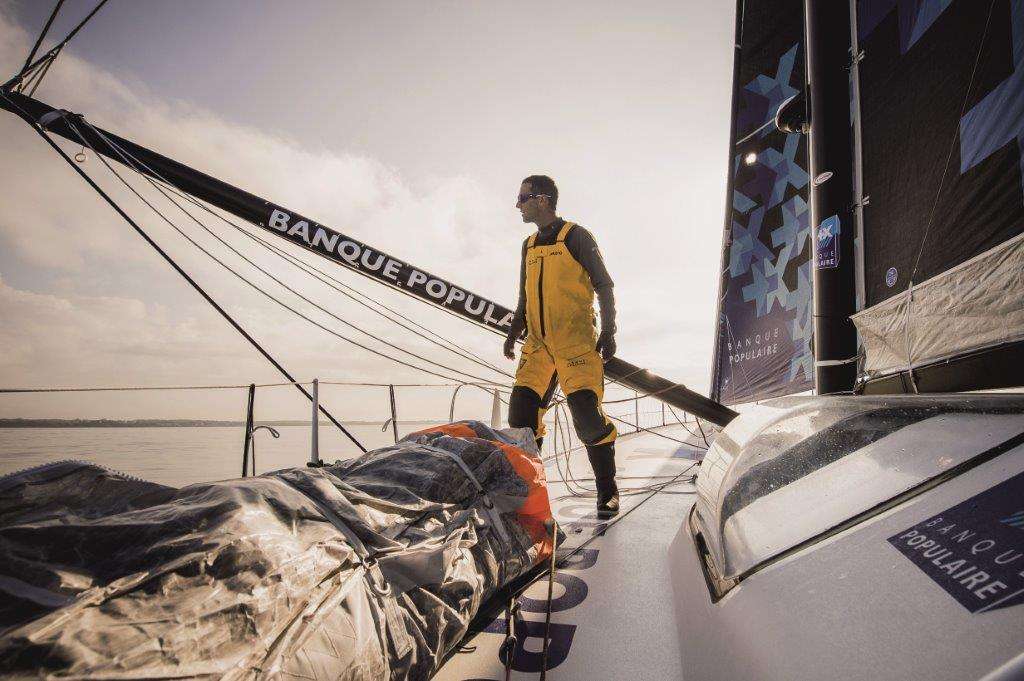 In August, several Ultimes will be competing in the Rolex Fastnet Race. If adequately brisk conditions materialise, these craft are more than capable of finishing in less than a day, despite the new course to Cherbourg being longer.

The newest Ultime is Banque Populaire XI, launched in May and skippered by Vendée Globe winner Armel Le Cléac’h. “We will carry out the first tests in Lorient before focusing on the sporting aspect by going offshore to take it in hand. We have been able to imagine and visualise the potential of Banque Populaire XI in the simulator for several months. But now, it is on the real playground that we want to demonstrate all its abilities.”

A historic decision to change the course to a finish in France, a first in the 96-year history of the race, will see navigators and tacticians scratching their heads and sailing masters changing their suite of sails

Other Ultimes returning to the race are Maxi Edmond de Rothschild, skippered by Cyril Dardashti and Team Actual (formerly MACIF), skippered by Yves Le Blevec. The trimaran is currently the holder of the single-handed non-stop around the world record.

“In light air, it is similar, and in big wind and big waves it is not much different, but in medium conditions the boat is between ten to 15% faster,” said Le Blevec of the refitted Team Actual yacht. While foilers usually prefer flat water, Le Blevec maintains that they see performance gain in wavy conditions. 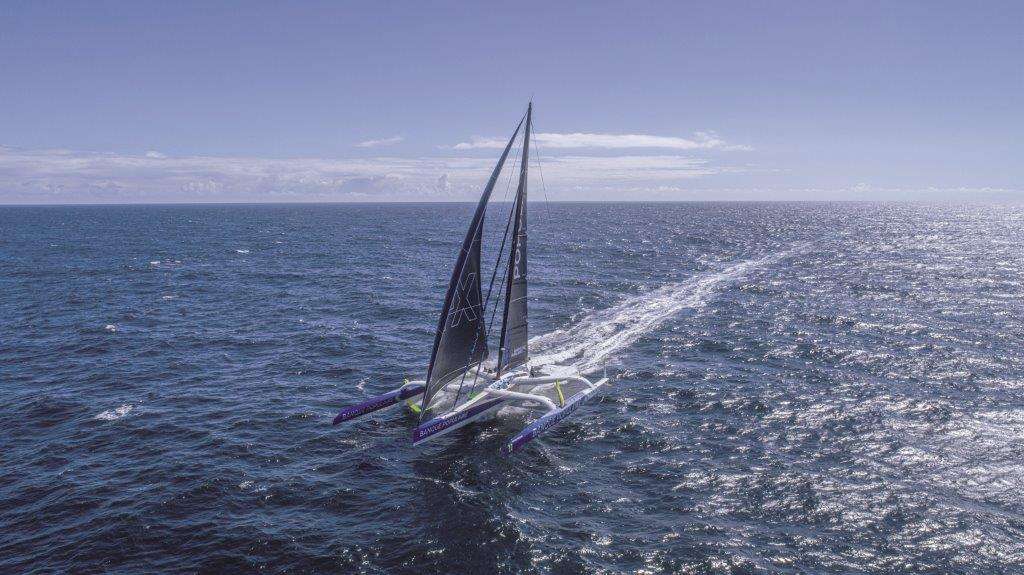 The Maxi Banque Populaire XI, on a sea trial in May

“With the old boat, we had big difficulties to go fast against the waves because the boat falls into the troughs,” he says. “On the new boat with the foils, it stays up out of the water and doesn’t fall off into the waves, so they go faster.”

Closely following them could be the little sisters, the 70-foot MOD70s such as Jason Caroll’s Argo and Maserati of Giovanni Soldini. I have been fortunate to race on some of these yachts, and I can testify to the incredible exhilaration and speeds (as much as 40 knots) that I experienced.

But offshore, these vessels are truly awesome and scary to sail, requiring incredible seamanship to manage their power and speed over the large waves. Behind them are an assortment of custom-built and small trimarans that will require reaching and running conditions to maximise their potential.

The sheer array of yachts competing is spectacular. There are some of the world’s largest and fastest maxi yachts within the IRC fleet, such as George David’s Rambler 88, the defending monohull line honours champion. This year, Rambler 88 will face stiff competition from the new foil-assisted ClubSwan 125 Skorpios, launched in June 2021.

“To design a racer sailboat, able to reach a speed in the region of 15 knots upwind and that will always be faster than the wind speed downwind, is something unique,” said designer Juan Kouyoumdjian about his creation. This canting keeler with twin sets of foils looks an especially powerful design for upwind and reaching. 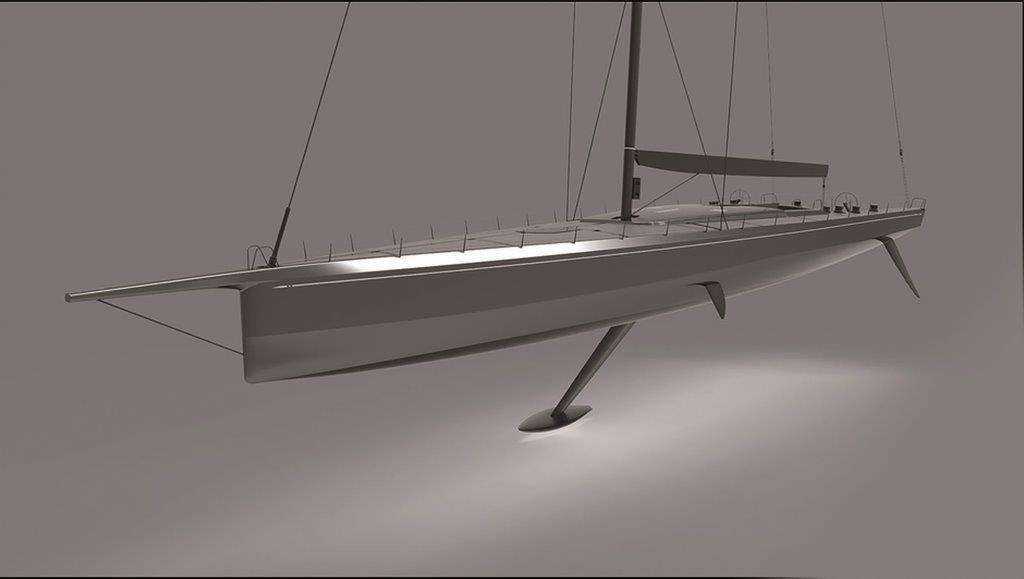 The hull design of the Nautor’s Swan 125 Skorpios

They will be chased by several VOR70, 65 and 60 former Volvo Ocean Race entrants plus a fleet of foiling IMOCA 60s, the fastest round-the-world (RTW) monohull yachts, recently returned from the 2021 Vendée Globe. The winners all used foils, most of which survived the rigours of the Southern Ocean and Cape Horn to return to France at record speeds. Among them are two Vendée Globe winners: Charlie Dalin’s Apivia, which was first home to Les Sables d’Olonne, ultimately beaten when Yannick Bestaven on Maître CoQ was awarded time compensation from earlier in the race.

It will be interesting to see the two boats of 11th Hour Racing (the former Hugo Boss from the 2016/17 Vendée Globe), of Charlie Enright, who skippered Wizard, the overall winner of the 2019 Rolex Fastnet Race. Britain’s Alex Thomson is back with a newly refitted Hugo Boss after suffering gear failure during the Vendée Globe.

This year, Rambler 88 will face stiff competition from the new foil-assisted ClubSwan 125 Skorpios, which was launched in June 2021

Elsewhere, a ground-breaking future Fastnet possibility is currently in build, the FlyingNikka designed by Ireland-based American Mark Mills for Italian Roberto Lacorte. Hugely influenced by the America’s Cup AC75 class and including some of the America’s Cup design team, FlyingNikka will be the first AC75-style foiler capable of offshore racing, thanks to a more seaworthy hull than the AC75. Initial polar performance diagrams show it reaching 22 knots in only nine knots of true wind.

For some sailors, it is not the gear but the chance for close competition in like-for-like yachting duels that gets adrenalin levels up. Seamanship, tactics, meteorology management and crew handling are the stuff of the smaller one-design fleets that will fight it out at Fastnet.

The dominant class this year will be the huge fleet of 41 Class 40s. A box rule design allowing development within certain parameters from its 2004 inception has resulted in the largest offshore sailing class with about 160 international yachts registered.

This fleet is mostly crewed by French sailors. Among the entries are Olivier Magre’s Palanad 3, winner of this year’s RORC Transatlantic Race, and Valentin Gautier’s Voodoo, winner of the 2020 Normandy Channel Race. Luke Berry’s Lamotte Module-Création, Class40 winner from the last Rolex Fastnet Race, will also be racing. 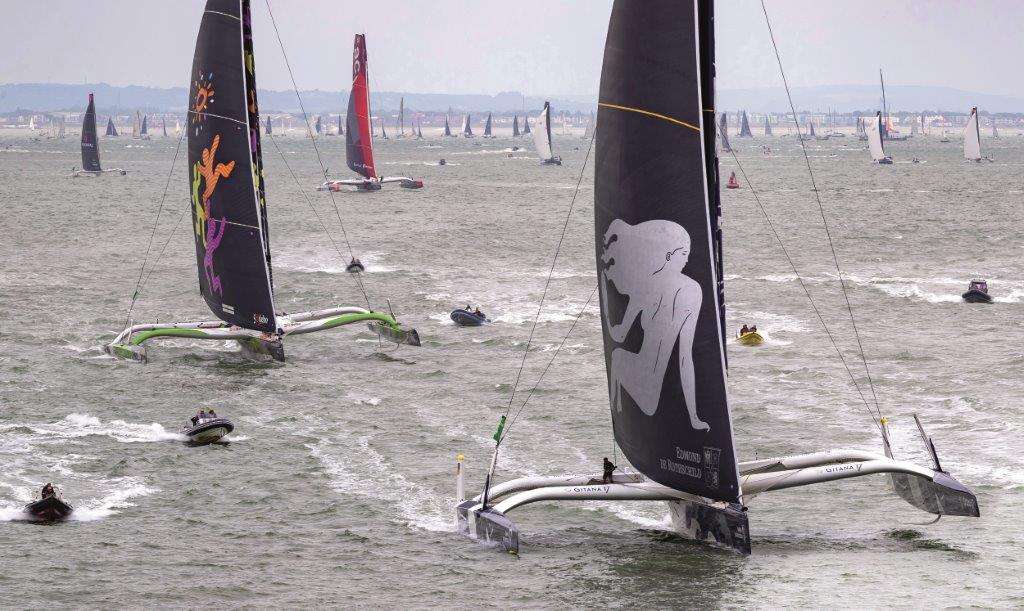 The multihulls at the start of the 2019 race

Of the grand prix classes, this is also the most international class, with entries from as far afield as Japan (Hiroshi Kitada’s Kiho). The competition will be hot.

New designs in these smaller sized fleets include 14 Jeanneau Sunfast 3300s. These are water ballasted, conventionally keeled race yachts, which I have enjoyed sailing.

More cutting edge is the world’s first foil-assisted production yacht, Beneteau’s Figaro 3. Sailing the Figaro 3 in the Bay of Biscay gave me my first sensation of gliding on a yacht, an incredible off-the-wind experience.

There are only a few Figaro 3’s in this year’s Fastnet, but it will be interesting to see how they go against conventional opposition such as the large fleet of American made J/109s and the 13-strong fleet of Beneteau First 40s.

Then there are several more modern French models, notably the multiple Fastnet-winning JPKs. There are 11 JPK 10.10 models competing and nine 10.80s. These, along with the Sunfasts, score very favourable handicap ratings under the main IRC system.

The growing popularity of double-handed sailing promises to make the start on August 8 exceptionally exciting. The short-handed division has doubled in size between 2009 and 2019, thanks to the influx of national and international entries. Among them are the very successful French double-handed teams.

For 2021, 89 crews are expected in the doubled-handed divisions – up from 64 in 2019. Race organiser RORC (Royal Ocean Racing Club) attributes this trend to the difficulty owners have in finding and maintaining a full crew, plus growing acceptance by the sport and increased media attention to this more challenging format.

However, the most significant boost internationally has come from the possibility of mixed double-handed offshore racing in the Paris 2024 Olympics. This has not been confirmed yet, but a decision is expected soon. 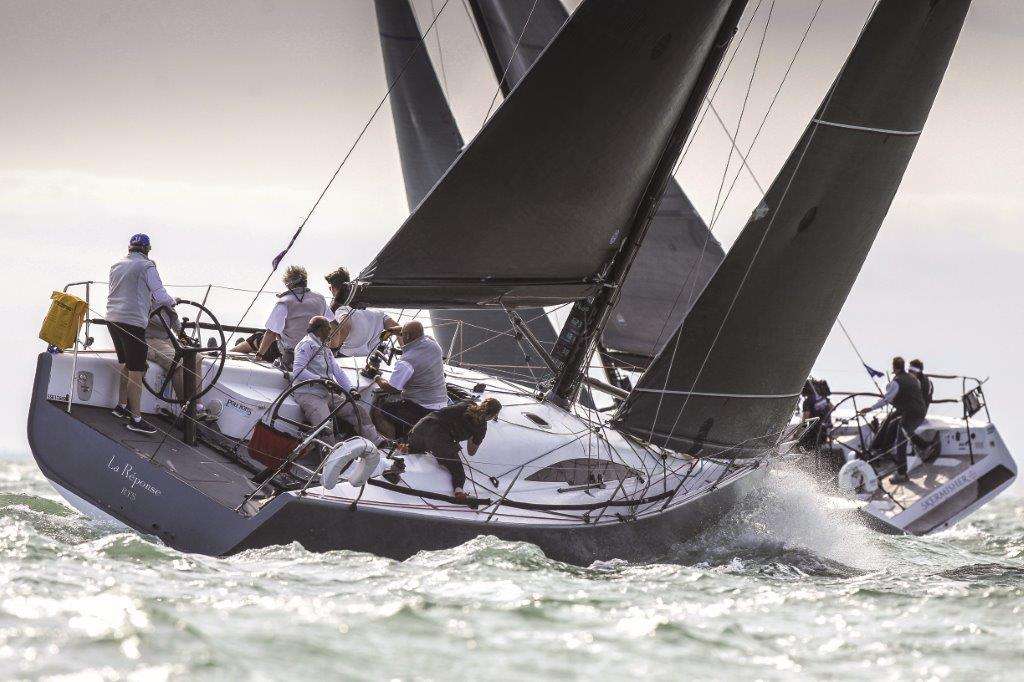 Close quarters action at the 2019 Fastnet

With events like the Route du Rhum and Vendée Globe, and classes like the Figaro, Class40 and IMOCA, France is the world’s stand-out nation when it comes to short-handed offshore racing. But at Fastnet, French two-handed teams have faced some of their toughest competition.

Among new entrants for the 2021 race is Scottish Olympic gold medallist Shirley Robertson racing on the new Sun Fast 3300. However, she and others, such as world record holder Dee Caffari, will have a tough time unseating the dominant JPK yachts from the podium.

“I love the Rolex Fastnet Race; it is special,” says Loison. “I have participated five times and won [my class] on four of them and overall, once. I am trying to keep my record for winning the two-handed division!”.

This August, the year’s biggest yacht race will have plenty to witness, as some of the brightest sailors and best yachts take part in a historic event.