Sanlorenzo Asia has sold both an SL90A and an SD118, models that recently premiered at Cannes Yachting Festival. Both units will arrive into the region in 2022 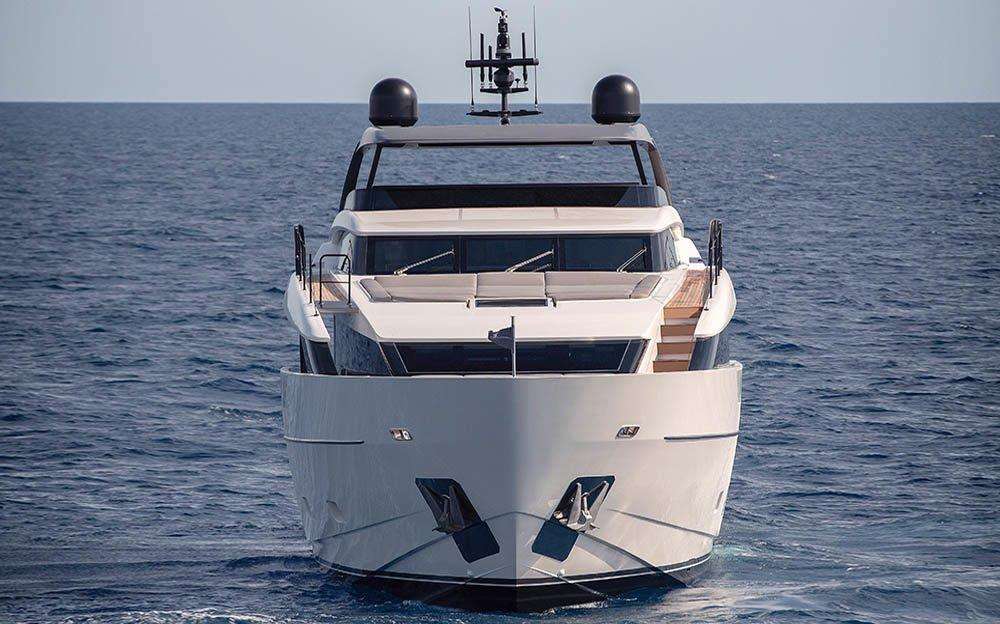 Two of Sanlorenzo’s 2021 premiere models – SL90A, the latest addition to Sanlorenzo’s Asymmetrical range, and the SD118 – have been sold into Asia. Both units will be delivered into the region in 2022.

The double sale is positive news for Sanlorenzo Asia, a division of Simpson Marine.

“I’m delighted to witness the strong brand trust and growing interest in Sanlorenzo in Asia,” says Nick Stratton, Sanlorenzo Asia sales manager. “It has been an incredible year for the brand in the region with many new yachts being delivered and enjoyed by their owners. These two new sales are just the start of an exciting adventure ahead for their owners – one that we will follow all the way. In testament to the brand’s popularity in Asia, we are very proud that the Sanlorenzo Asia division recently received an award from Sanlorenzo for the Best Sales and Service Performance Worldwide in both the Yacht and Superyacht divisions.” 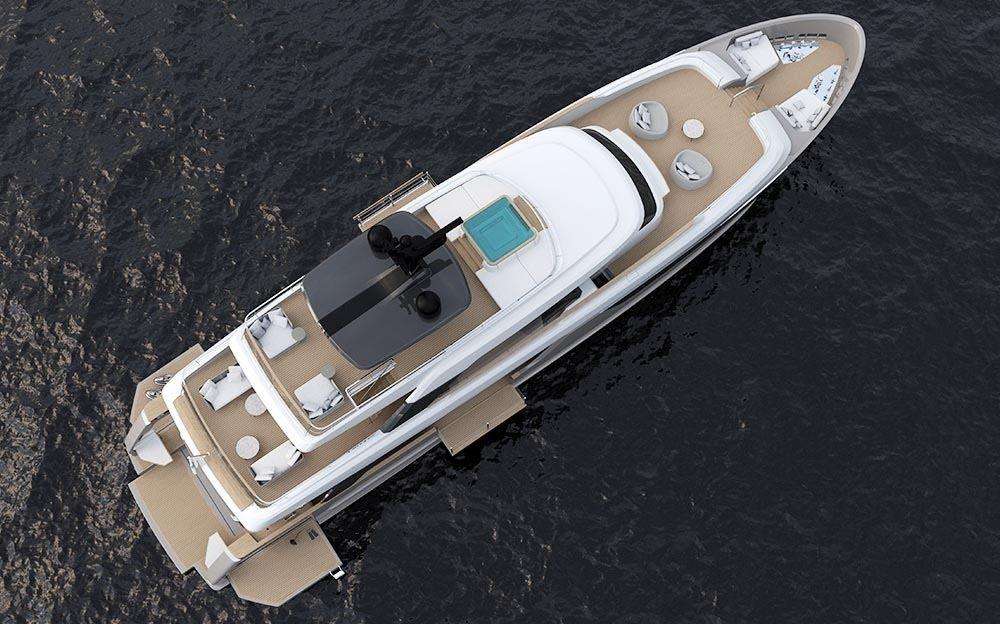 The semi-displacement SD118 was introduced by the shipyard in summer 2021, and shown at the Cannes Yachting Festival in September. It is the first SD model to have Sanlorenzo’s Asymmetrical design, which was previously introduced on the SL-line planing yacht models SL90A-SL120A.

At 35.7 metres long and with an 8-metre beam, the SD118 has space for up to 10 guests (and six crew members) accommodated in five cabins. Its exterior was designed by the shipyard’s long-term Italian design partners, Zuccon International Project. Her design balances classic and traditional lines into a contemporary interpretation, with an aesthetic centred around her wide-body hull. A restyled stern with a 19 sqm beach terrace with foldable side terraces allows for expansive outdoor living space while providing storage for a 5.2-metre tender. 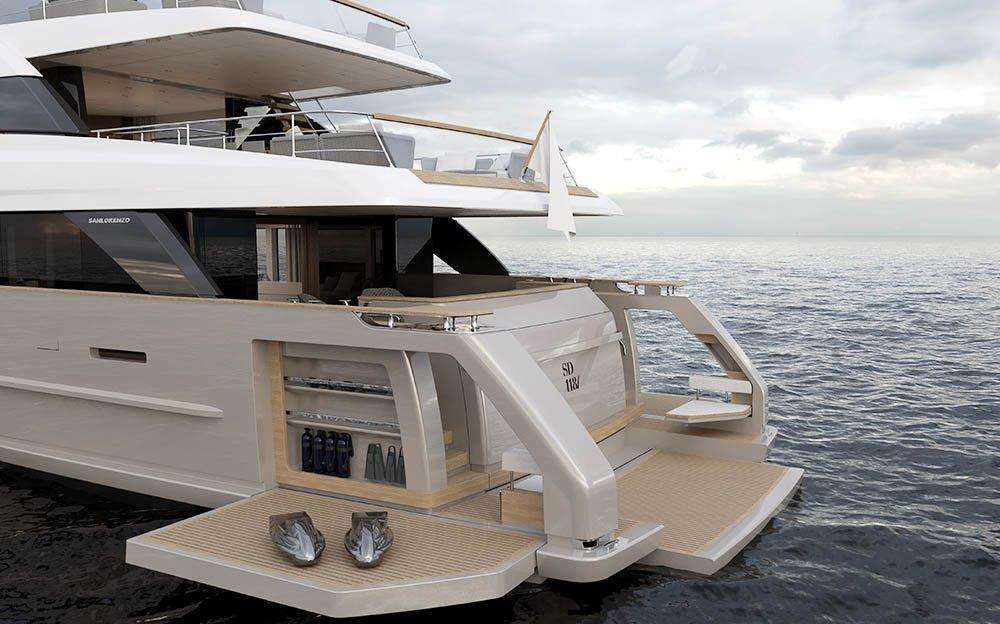 The 31 sqm forward outdoor living area of the SD118 is organised on two connected levels, the upper deck and the forward deck. These provide an area for open-air relaxation, which the owner has direct access to from their spectacular full beam 45 sqm forward cabin by means of a sliding hatch. This hatch is concealed below the staircase connecting the two decks in order to ensure privacy. Adding to these exterior areas, the 57sqm flybridge is fitted with movable branded furniture, and a wet bar provides an inviting area to enjoy uninterrupted vistas across beautiful surroundings.

The design hallmark of the SD118 is the layout arrangement that has an asymmetrical configuration providing increased space, comfort, flexibility of use, and an interrupted view of the sea from both sides.

The 290 GT yacht is powered by two Caterpillar C32 Acert diesel engines, which will allow her to cruise comfortably at 10 knots, with 2,500 nautical miles range and reach a top speed of 19 knots. 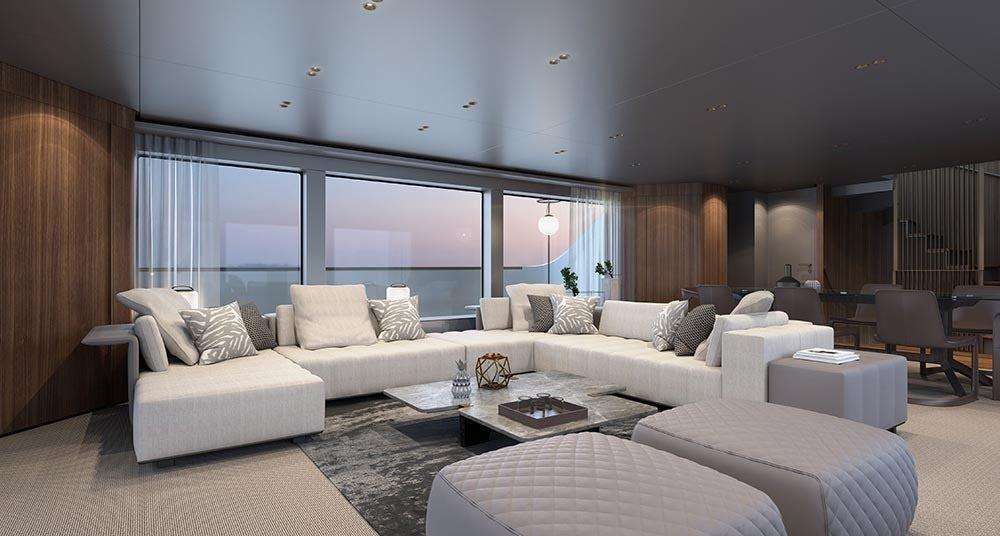 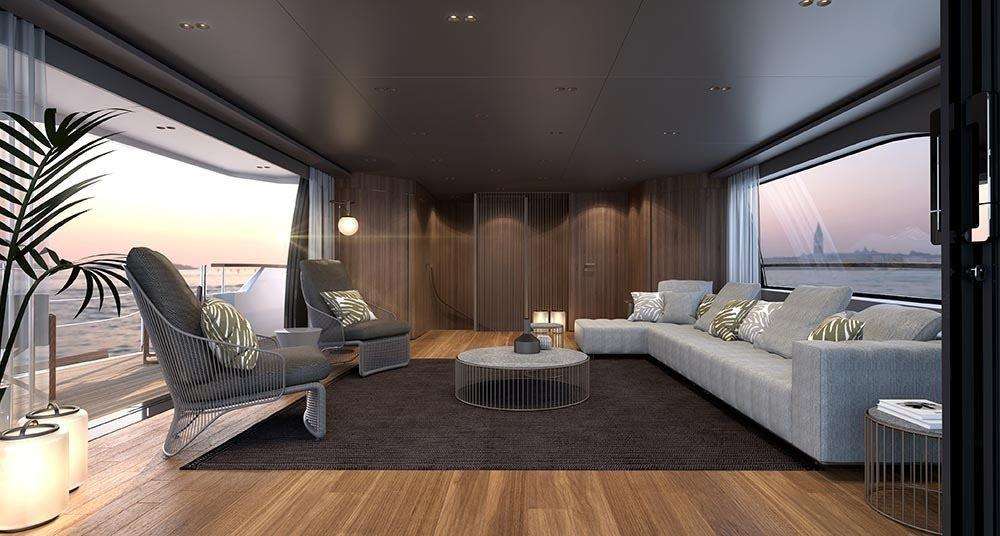 Designed by Zuccon International Project, the 27.6m SL90 Asymmetric was also displayed at the Cannes Yachting Festival. The SL90A is another successful addition to the yard’s innovative Asymmetric range. Her asymmetrical configuration allows for a layout with the owner’s cabin and main deck saloon on the same level, a design solution normally found on larger yachts. The owner’s cabin benefits from dedicated access to the bow area, while the flybridge and the bow area are connected to each other and feature a sundeck integrated into the full-beam superstructure.

The SL90A features “One Way” glazing which increases the perception of continuity between the windows and the hull. Another new design feature is a raised pilothouse on the main deck, which increases the feeling of internal space. This allows for plenty of light throughout the main deck saloon, which spreads across 31.5 sqm and connects to a 19.5 sqm cockpit, making it an incredible 50 sqm of a common living area. A 20 sqm master suite on the main deck forward is spread across three distinctive levels including the master bedroom, bathroom and dressing room. 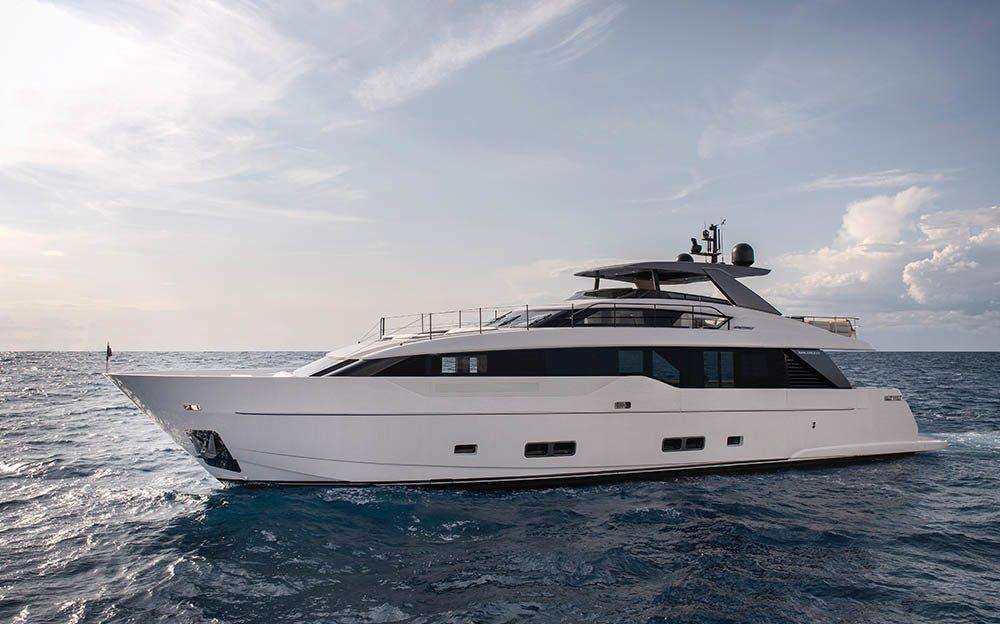 Powered by two MAN 2000 HP engines the SL90A will cruise fast and comfortably at 25 knots with a maximum speed of 29 knots.

These new sales of the SL90A and SD118 add to an increasingly successful sales track record for Sanlorenzo in Asia. Notable new models sold into the region include metal superyachts such as the 52Steel, 500EXP and The Alloy, and composite yachts from the SX, SL and SD ranges including the SX112, SL102A, SL96A, SD96 among others.