When a veteran sailor and boat collector in Turkey came across a 1970s Hong Kong-made schooner there, he could not resist restoring it to its former glory

Rahmi M. Koç at the wheel of the former British Royal Navy picket-boat Maid of Honour, built in Cowes in 1927

The Hong Kong-built schooner Teodora, a 2021 restoration project by Turkish tycoon Rahmi M. Koç – honorary chairman of Koç Holding, Turkey’s largest industrial conglomerate, is one of many vintage and historic yachts owned or restored by Koç. Teodora was built in 1979 by Cheoy Lee Shipyards, though the 91-year-old Koç discovered it in his native country.

It was while sailing on his 52m ketch in southern Turkey in 2019, that Koç first caught sight of the 13m Teodora.

“When I am on board Nazenin 5, I usually go for walks after dinner around the marinas,” he recalls. “I was in Bozburun at the time, and it was there that I saw Teodora. Luckily for me, both owners – a wife and husband – were inside. I was with Ibrahim Yazici [a Turkish classical and contemporary musical orchestra conductor] at that time, and we asked for permission to come aboard to have a look around the boat.

“As we talked to them, we learned that they had just completed an extensive sailing trip through Asia with Teodora and that they were ready to sell the boat. 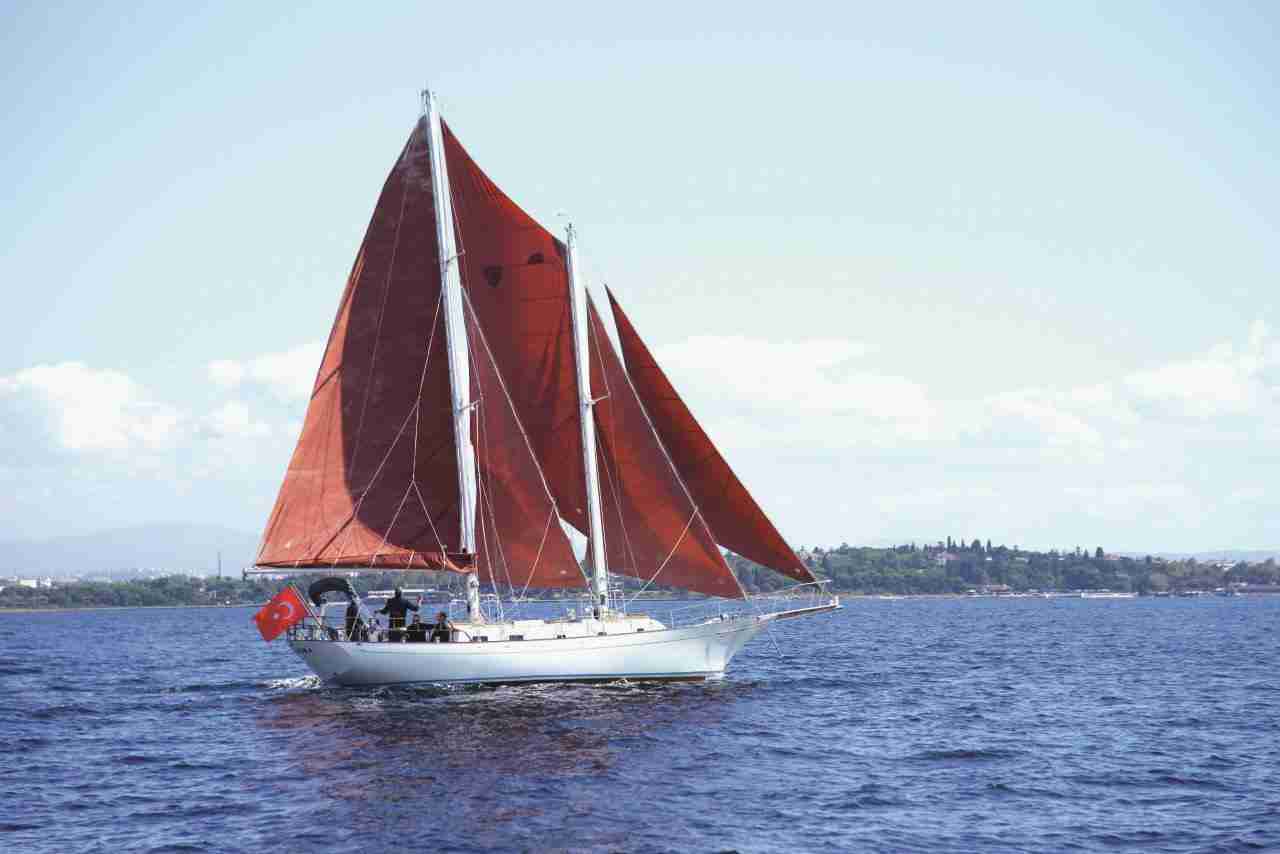 Teodora, with her red sails, cruises off Tuzla, where the shipyard RMK Marine is based

“After we had left Bozburun, I decided to buy her, and the owner delivered her to [the southwest coastal town of] Marmaris. My captain Yosi and my second captain, Mehmet then brought her to Istanbul, for a refit at RMK Marine. There, Özgür Numan, our yard director, took on a full restoration of Teodora according to a marine surveyor’s report and did the thorough work on her for about a year.”

Unfortunately, the origins of the name Teodora remain unknown to Koç. “Her last owner told me that he didn’t change her name when he bought her – it might be her launching name.” Hong Kong’s Cheoy Lee shipyard could not confirm the original name but was able to identify the exact model as being a rigged Clipper 42 schooner.

“Apart from the project engineers, there were approximately 30 people overall working on restoring Teodora”
– Özgür Numan 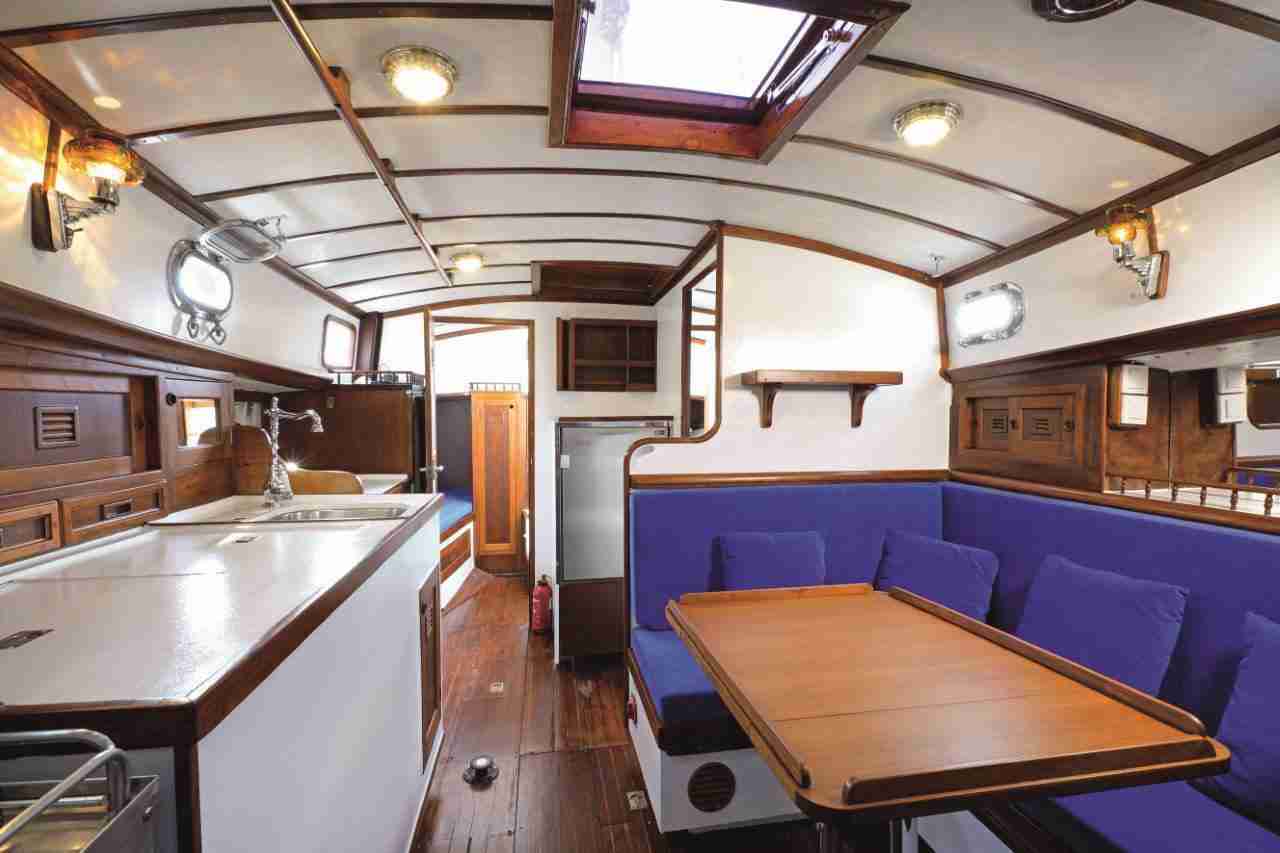 Özgür Numan, the yacht department director of RMK Marine, who oversaw the renovation project, said about 30 people were involved in restoring Teodora, not including the project engineers.

“Four teak deck-layers were employed; four to five painters and varnishers were used; three carpenters, four fibreglass workers and two to three in each of the following disciplines: mechanics, steel and metal panel and fittings replacement and fixing, plumbing, electrical wiring, rigging and outfitting, upholstery, stainless steel manufacturers,” said Numan, breaking down the workforce needed to bring Teodora up to an exacting standard. 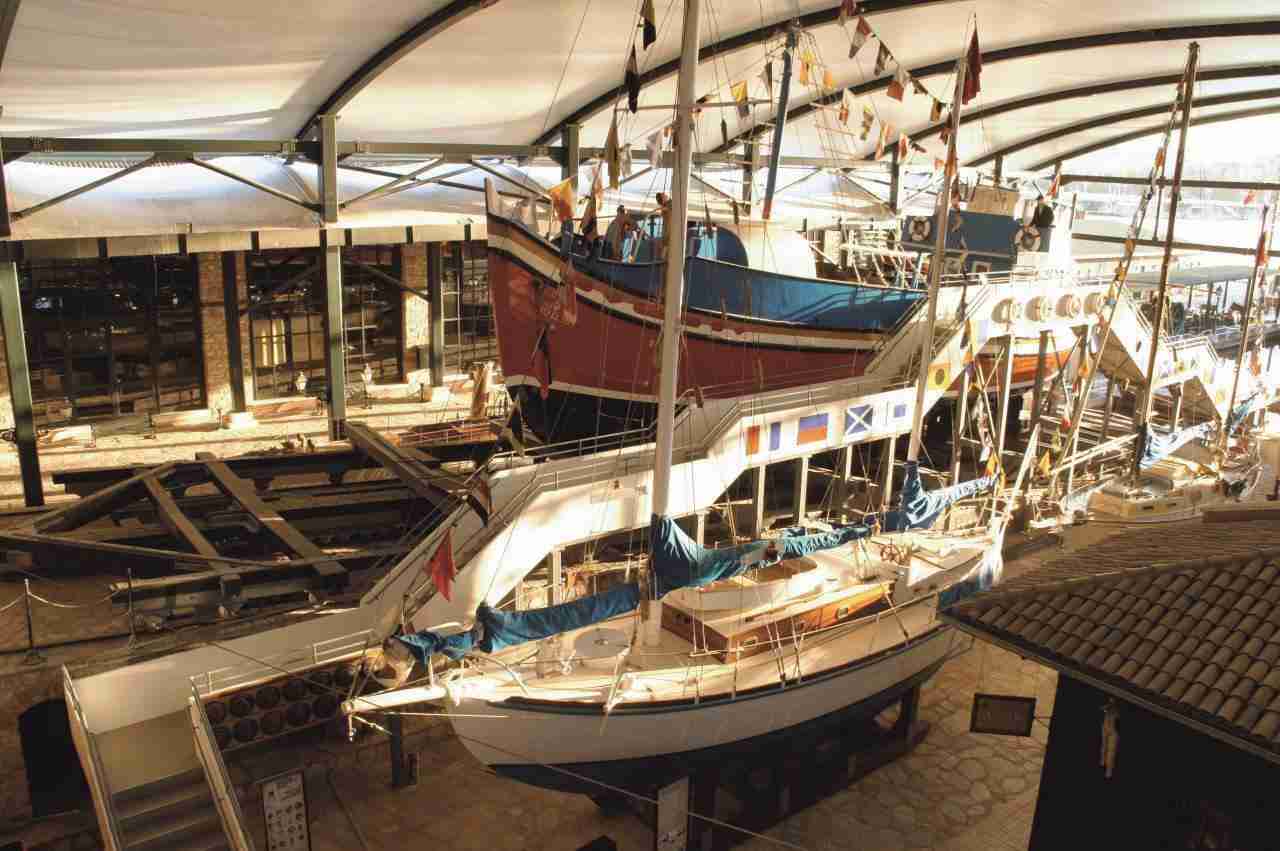 Vintage maritime objects on display at the Rahmi M. Koç Museum of Istanbul include the ketch Kismet, the first Turkish yacht to have circumnavigated the globe, in the late 1960s

One of the biggest challenges of renovating the schooner was sourcing the right materials, Numan adds. Teodora needed extensive fibreglass work on the hull and deck, and she needed treatment for osmosis. Repairs and relaying of decks, then polishing all deck fittings, mast and spar repairs and the main engine overhaul were also thorough. Pretty much all piping and plumbed fittings were renewed, as were the electrical system throughout, as well as navigational / communication equipment, interior decoration and upholstery works. “There were no big challenges, really though,” he says modestly of that intense overhaul, “having no data about the rigging and some other elements were a bit difficult, but we developed drawings.

“The main task was to determine the scope of the works – keeping the balance between a perfect museum-condition restoration piece and a boat in sailable condition, to be kept within a budget is always a challenge when I take on projects like this – and Teodora was exactly the same. 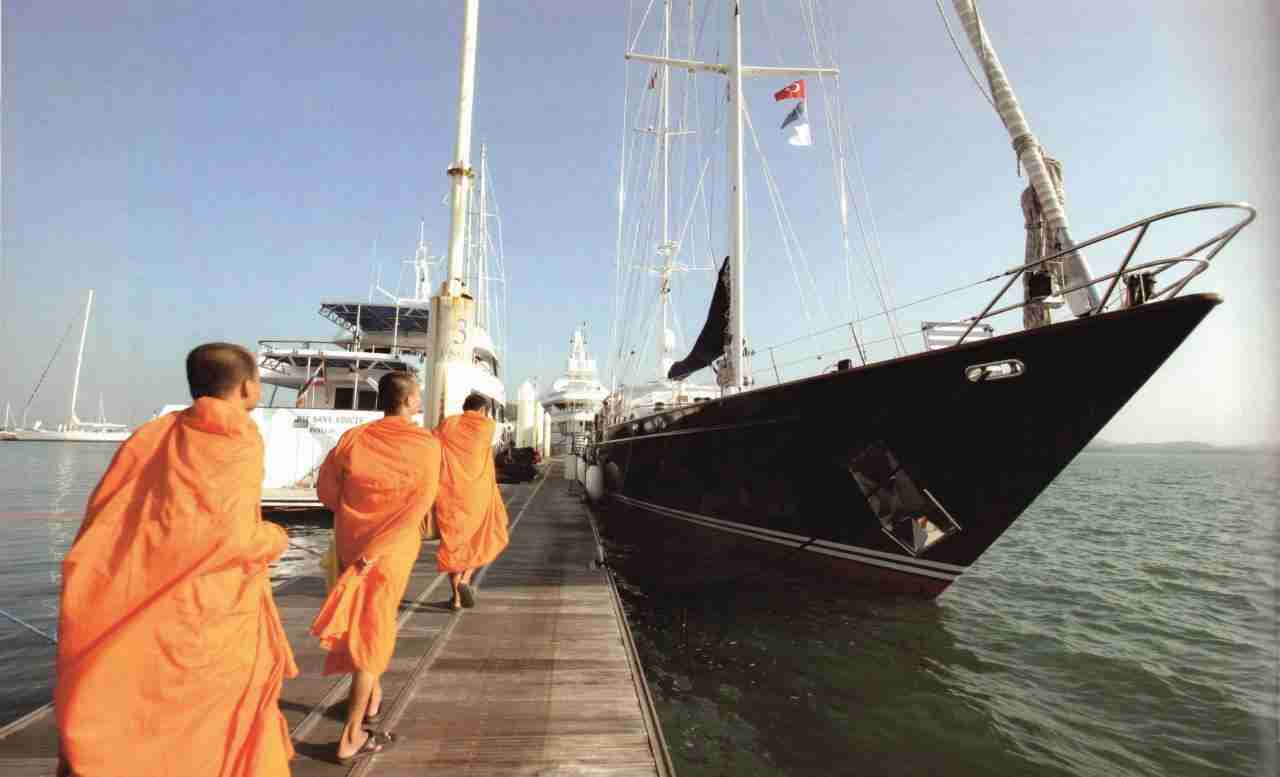 “Mr Koç’s general requests to the renovation team were tidiness, simplicity of the sailing systems, and two specific things – to have light blue cushions and to keep the bimini awning, both these were met quite easily”.

When asked how Teodora performs, after the year-long restoration, Koç admitted, “I have not sailed her yet, as I did not have the time. But others have done so, and they told me that she was sailing smoothly.

Koç has a fascination for all things nautical. His Rahmi M. Koç Museums – he has three, including one that steals the show in Istanbul, housed in an Ottoman-era shipyard – are home to more than 50 historic sailing and motor vessels, and rowing boats. And he also has quite a collection of vintage outboard motors on display. Other exhibit rarities range from a tiny, late-19th century children’s rowing boat about a metre long, to a 94m 1944 US-built mid-20th-century Tench-class submarine, the TC Uluçalireis (named after a 16th-century Ottoman admiral of Italian descent), not to mention hundreds of scale models of ship from various eras and origins. 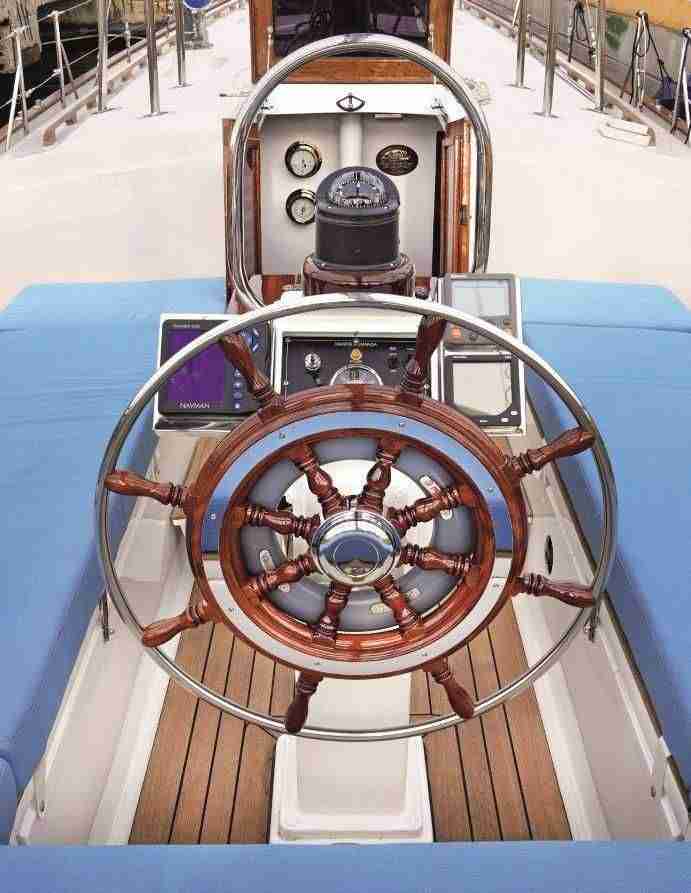 Boating is in his blood. “I learned how to sail when I was 10,” he recalls, “from my Italian friends, who were visiting Buyukdere [a district in Istanbul on the banks of the European side of the Bosphorus] to spend the summer there.”

Born in 1930 in the Turkish capital city of Ankara, he is known internationally in the business world for his industrial empire. His love of beauty, be it ancient rare carpets or in niche feats of engineering such as miniature cars or steam engines are constant passions also revealed through his magnificent residences and the museums he founded and that he continues to keep alive through several foundations located in Istanbul, Ankara and Ayvalik, all places where attention to detail is meticulous – just as it is in the Divan Group hotels he owns.

Also acquired by Koç in the course of last year were a commuter boat built by Blanchard yard of Seattle in 1947, named Gwendolyn, and T/T Vedette, the original consolidated tender acquired by Frederick Vanderbilt for his famous ship.

Asked how Teodora performs, after the year-long restoration, Rahmi M. Koç admitted, ‘I have not sailed her yet, but others have done so, and they told me that she is sailing smoothly.’ 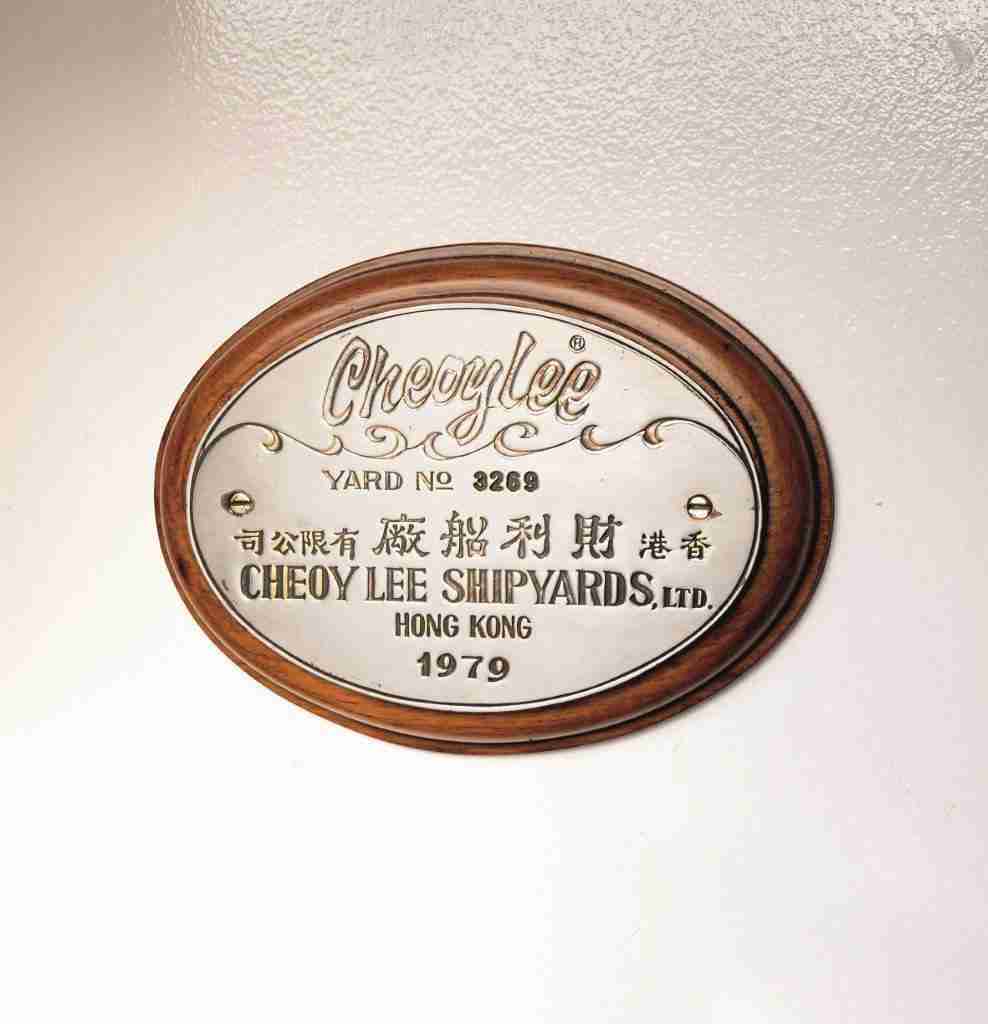 Of the several boats he owns, the most noted is his majestic 52-metre twin-masted sailing ketch named Nazenin 5, built in the RMK Marine shipyard – whose initials correspond to those of the tycoon – in Tuzla, an area in the province of Istanbul, long known for its naval and commercial yards. Early in the millennium, with a crew that included two captains, a doctor, a professional cook, several seamen and other staff, Koç completed a circumnavigation aboard his previous yacht Nazenin 4 that took him around the world, westbound, with stops in the Caribbean, Panama, Galapagos Islands, French Polynesia, New Zealand, Australia, Singapore, Sri Lanka, Suez and other locations.

And at 91 years of age, Koç is still actively enjoying boating, still adding to his personal yacht fleet, acquiring museum-worthy exhibits and living as sociable a life as is possible right now – while always on the lookout for his next renovation project. 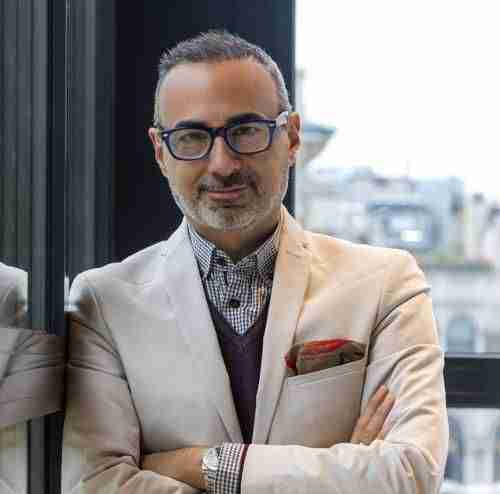 Bruno Cianci is an Italian Istanbul-based chartered journalist and writer and author of a dozen maritime books. Recently he was awarded a knighthood (Order of the Star of Italy) by the President of the Italian Republic for services to bilateral Italian-Turkish relations. He is also a PhD student in Marine Sciences and Technologies.