Veteran sailor Herb McCormick ventures out on the new Lagoon 52, which sees a newer, more aggressive look from the famed French name in catamarans

Have you ever sailed a tennis court? Yes, I know, it’s a ridiculous question. Yet I couldn’t erase the image from my mind. I was perched behind the wheel of the new Lagoon 52 catamaran, which is situated on a vast flybridge, a good two stories above sea level. This is a rare layout for a sailboat. 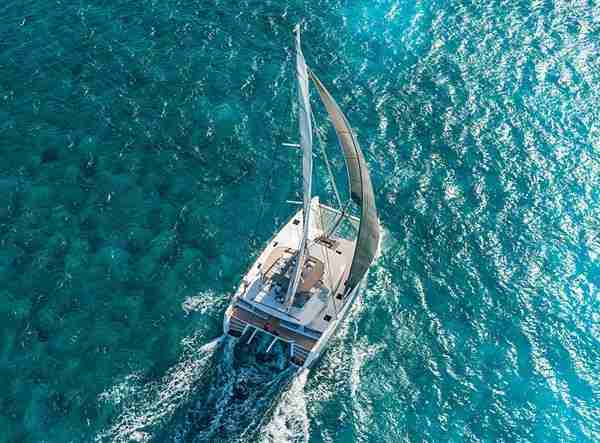 The view was not only expansive and majestic, but also, at first, intimidating. Beneath me, in both length (15.84 metres) and width (8.6 metres), was a vessel of substantial girth and authority, with dimensions that seemed better suited for a game of rackets than an afternoon of yachting. On top of all that, it was going really fast. 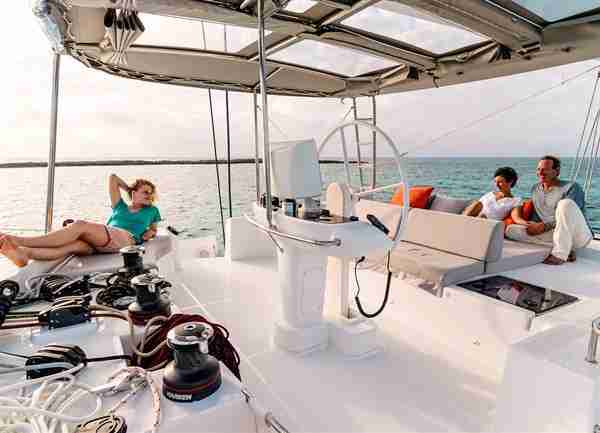 For many boats that rely on the wind for propulsion, it would have been a challenging day for sailing. It was shortly after last February’s Miami International Boat Show, and a good 20-knot easterly breeze was stacking up a rolling progression of three to five-foot waves in the open Atlantic Ocean off the art-deco skyline of South Beach. The wind was whistling and the spray was flying. And the 52 was trucking, muscling through the chop with ease and efficiency, and effortlessly knocking off double-digit boat speeds of ten to 12 knots. After a few minutes getting comfortable at the helm – the hydraulic steering offered little feedback, and it took me a while to settle into a groove – the boat really came alive. Not only was the 52 a big boat, I realized, it was also a purposeful one. 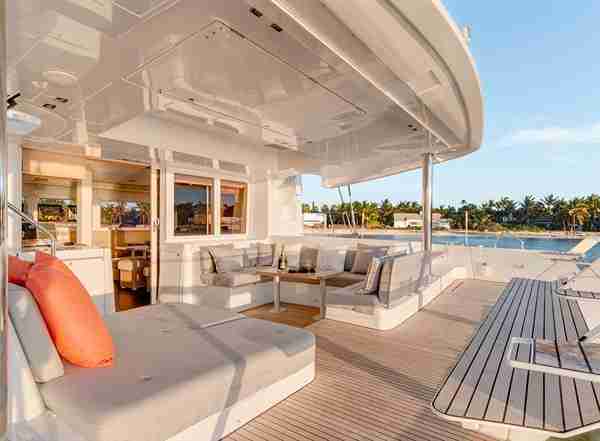 To my left and right on the raised steering platform was a talented crew of French sailors (at one point I counted seven of us, and there was room for plenty more), and it seemed a waste not to keep them busy. So, after sailing upwind for a spell under the smaller, self-tacking jib, we decided to furl that sail and opt for the larger of the two headsails, a massive Code Zero reacher, originally developed for round-the-world racing yachts. With all the requisite sheets and lines led to a bank of Lewmar winches on the upper deck, the maneuver was swiftly accomplished. Once the Code Zero was up, set and drawing, the boat really took off, registering speeds in the lower teens. I had to admit, this was something I could really get used to. 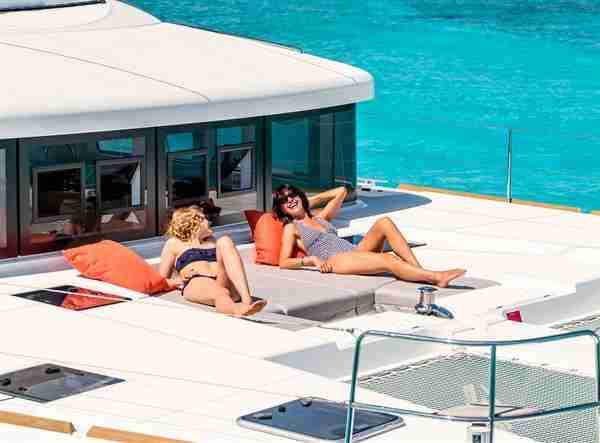 When the global economy tanked in 2009, sailboat manufacturers were hit especially hard. The one segment of the industry that remained relatively robust was catamarans, which have come to dominate the bareboat charter fleets and have also become widely accepted as a viable option for long-distance cruising and voyaging. Cats are appealing to many mariners for numerous reasons, chief among them the fact that they sail on a more or less level plane and don’t heel like traditional monohulls. Also, their generous footprint translates to voluminous interiors with wide-open floor plans and spacious accommodations and storage. Once they experience the roominess and prowess of a cat, many sailors never go back. 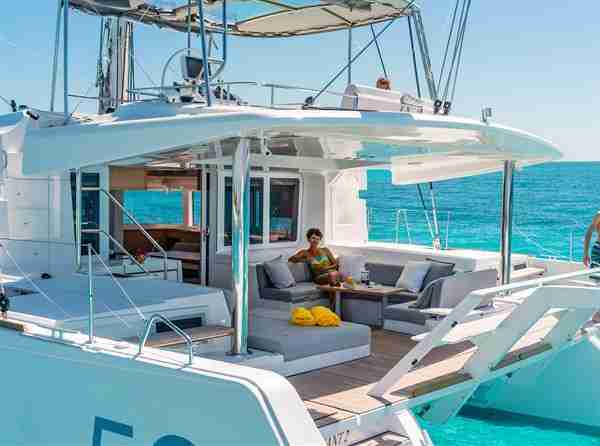 Since 1984, Lagoon has been one of the world’s leading builders of luxury catamarans, readily recognizable for their turret-style coach roof, an overhanging “eyebrow,” and incorporated windows, which wrap around the main cabin and provide lots of natural light while offering sweeping vistas from within. But while, at first glance, the 52’s profile plan certainly bears resemblance to earlier sister ships, the boat (which replaces the very successful Lagoon 500 in the company’s line of production boats, which today ranges from 38 to 62-feet) is a significant evolution from Lagoon’s earlier models. 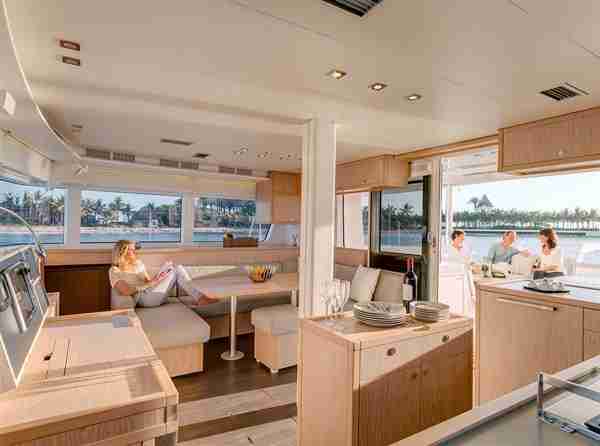 For this latest Lagoon, the company again commissioned the well-respected French naval architecture consortium Van Peteghem Lauriot Prévost (VPLP) for the rig, lines, engineering and exterior features, and the Italian designers Nauta Design for the interior styling and layout. It has proved to be a very successful collaboration. 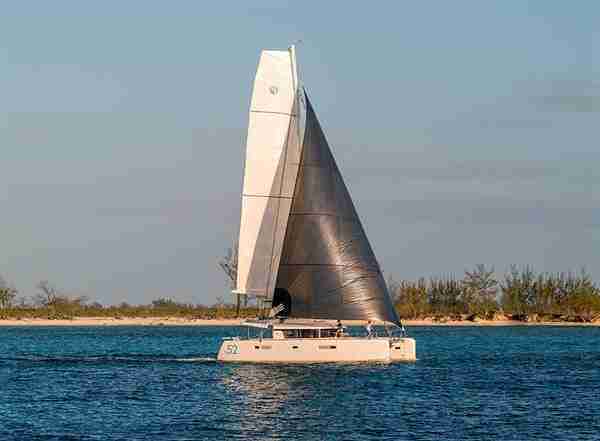 VPLP made its name for fast and strong – but minimalist – offshore racing cats, and they’ve borrowed many ideas from the racecourse for the 52 (including an extremely powerful, fully battened, square-top mainsail). First, VPLP moved the mast aft compared to most cruising cats, and this centralised placement accomplished several goals. It opens up the visibility for the helmsman, and also expands the foretriangle (the area forward of the mast) to provide a wider range of optional downwind sails (like the Code Zero we flew off Miami). This location for the mast also minimises pitching, which is a potential issue in cats that aren’t properly balanced. 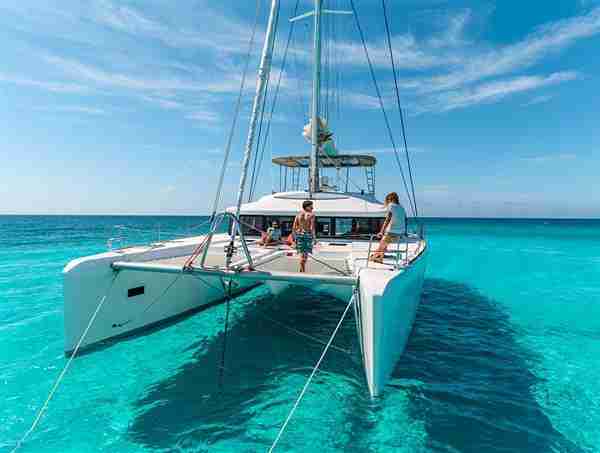 Next, VPLP fashioned elegant, diamond-shaped vertical bows that maximize the waterline length of the hulls and employ sharp, narrow entries, which really slice through even boisterous seaways. Finally, rather than dedicated daggerboards that can be raised or lowered, they opted for twin, fixed “mini-keels” in each hull that promote stability and lateral resistance. True, daggerboards make for faster boats, but they are also intrusive, as they intersect the hulls. By eliminating them, Lagoon has opened up the living space down below. It’s a compromise, but the trade-off seems worth it. 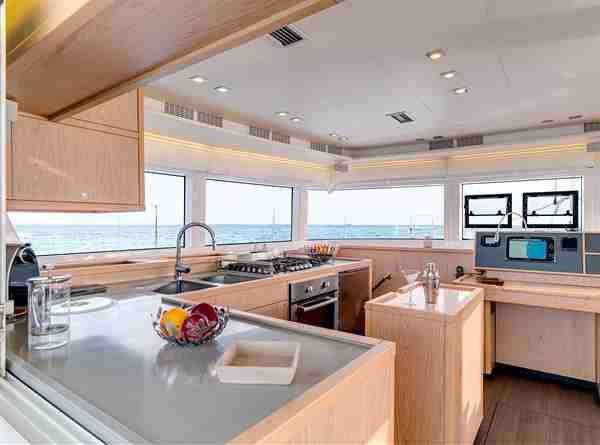 With catamaran construction, the idea is to build a boat that is light enough to maximize performance without compromising structural integrity. It’s tricky to strike the perfect tone between strength versus speed, but Lagoon certainly appears to have done so with the 52. The boat was laid up using anti-osmotic and polyester resins, with an infused balsa-core sandwich in the decks and the topsides of the hulls; below the waterline, the layup is infused solid glass. But the backbone of the boat, which ties it all together, is a composite longitudinal beam on which the mast is supported that’s glassed in between the fore and aft bulkheads. The deck is also structurally bonded to this central beam, which disperses the considerable loads evenly and effectively. 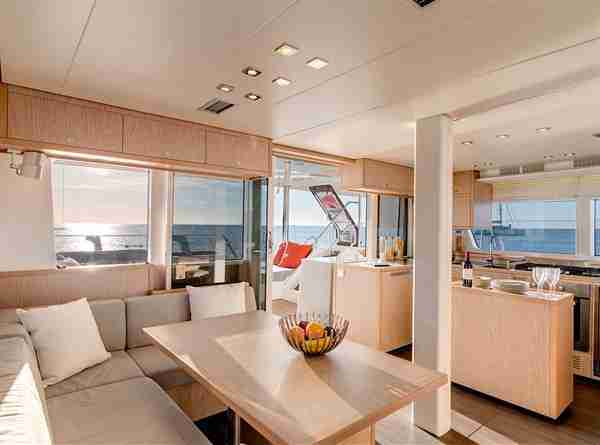 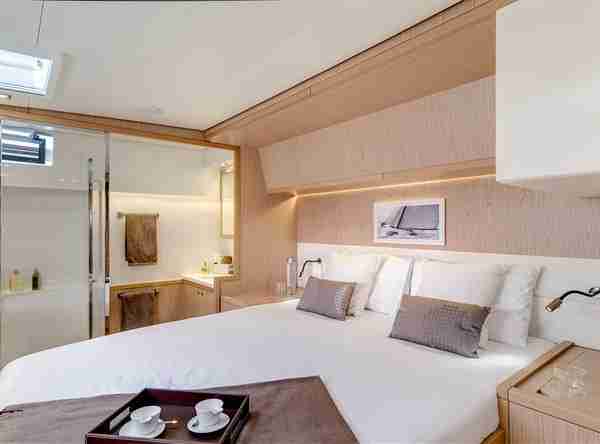 Down below, the 52 is more like a comfy waterfront apartment than a traditional sailboat, and I mean that as a compliment. The central living area, finished in light hardwoods, is particularly appealing. To one side of the sliding glass door is a gourmet galley with a five-burner stove, double sinks and an independent island for storage space and a working countertop. It is opposite a wraparound settee with a large dining table. Just forward is a modular navigation station smack-dab in the middle of the boat, which doubles as a seagoing office. This would be a very comfortable boat to live aboard. A suite of solar panels and a dedicated generator supplies onboard power. (These are optional features, but nearly every boat is delivered with them.) 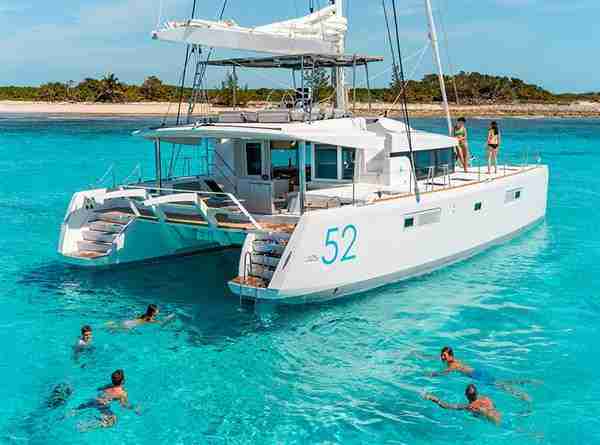 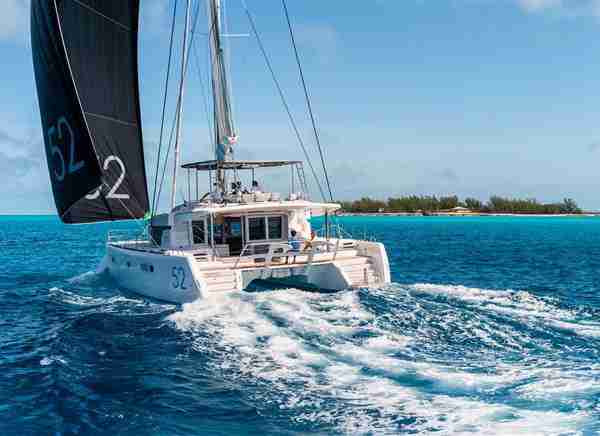 For sleeping quarters, there are several different options to choose from – including three, four and five cabin layouts. All of the staterooms would make very comfortable one-bedroom studios in their own right. Our test boat also incorporated one of the more innovative cabins I’ve seen on any yacht: a very roomy and unusual owner’s suite that is accessed by a flight of six stairs through a hatch in the spacious main cockpit aft. This is a completely secluded space that is separated from the rest of the interior. While not for everyone – I’m not sure I’d care to live anywhere that required a trip outside to make a cup of coffee – it will certainly be alluring to those who put an absolute premium on their privacy. 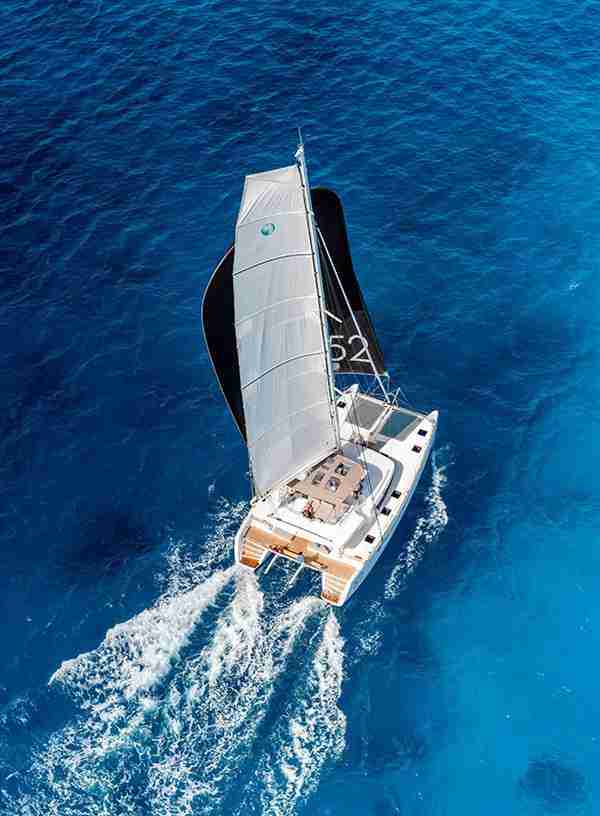 As we motored back through Government Cut to return to our downtown Miami slip –sliding along effortlessly at 8.2 knots with the twin diesels turning over at 7200 rpm – I decided the tennis court analogy was a bit of a stretch. That said, you could certainly make the case that, fundamentally speaking, it’s a boat with a big serve that delivers plenty of style points. So, forgive me, but the Lagoon 52 is a winner. Game, set, match.