The gruelling Vendée Globe is known as the 'Everest of the seas’. Kojiro Shiraishi, the first Asian sailor to ever participate in the legendary ocean race, tells us what he learned on his first attempt in 2016, and why he’s back this year to finish what he started 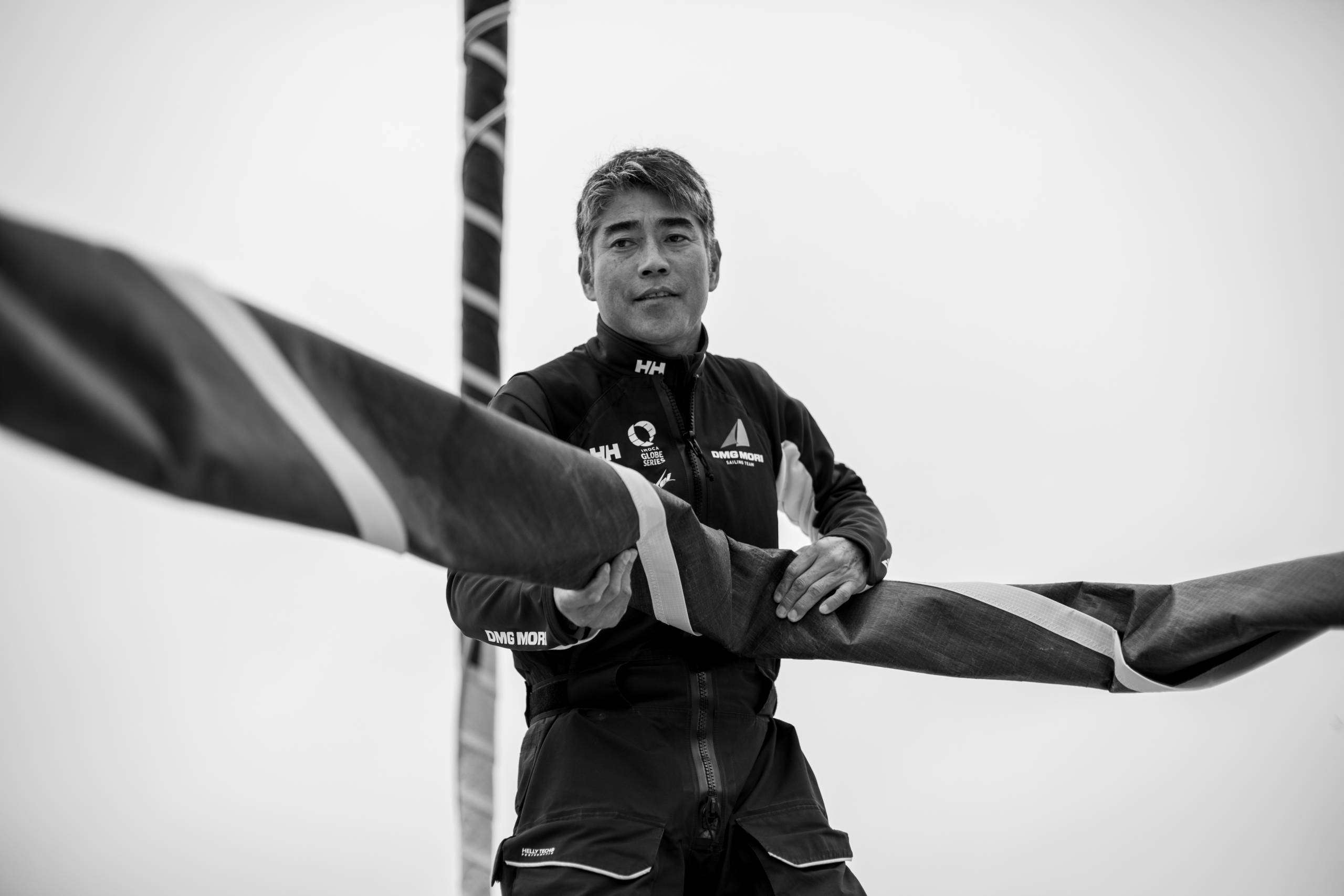 The Vendée Globe is regarded by many as the world’s toughest sporting challenge. Every four years, a cohort of seasoned sailors depart from the marina at Les Sables-d’Olonne in France, faced with the daunting mission of circumnavigating the world single-handed, without stopping and without assistance.

The ninth Vendée Globe departed on November 8, 2020. While the race generally runs from November until February, a significant proportion of entrants retire from each race after encountering issues such as dismasting, physical injury, broken rudders, cracked hulls or even capsizing.

Out of the 138 sailors who have lined up at the start since the first race in 1989, only 71 have crossed the finish line. Three skippers have been lost at sea. 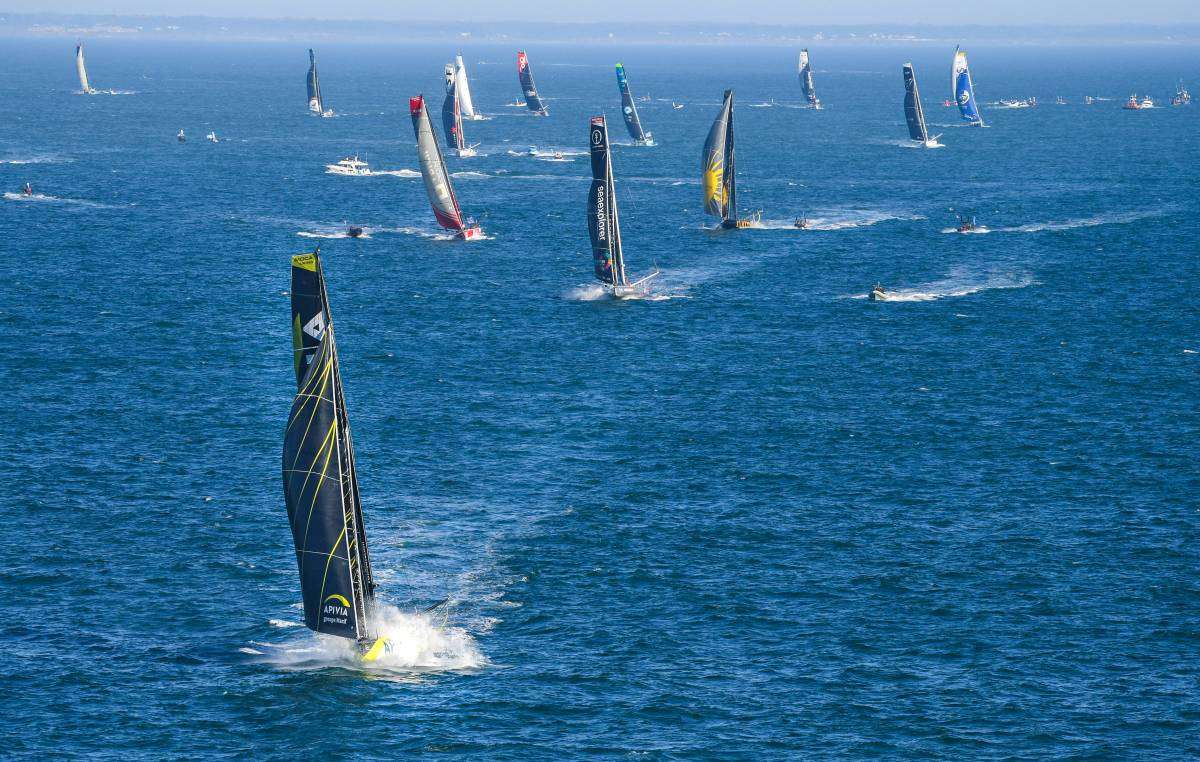 This year’s lineup of 33 skippers is the most diverse to date, say the organisers, with 10 non-French sailors and a record number of six female skippers. But Japanese yachtsman Kojiro Shiraishi is the only Asian among them.

Shiraishi made history in 2016 by becoming the first Asian sailor to take part in the Vendée Globe. (In July, he told French news agency AFP: “Being Japanese and trying to do the Vendée Globe is extremely difficult – it’s like a Frenchman leaving for Japan to become a sumo wrestler”.) 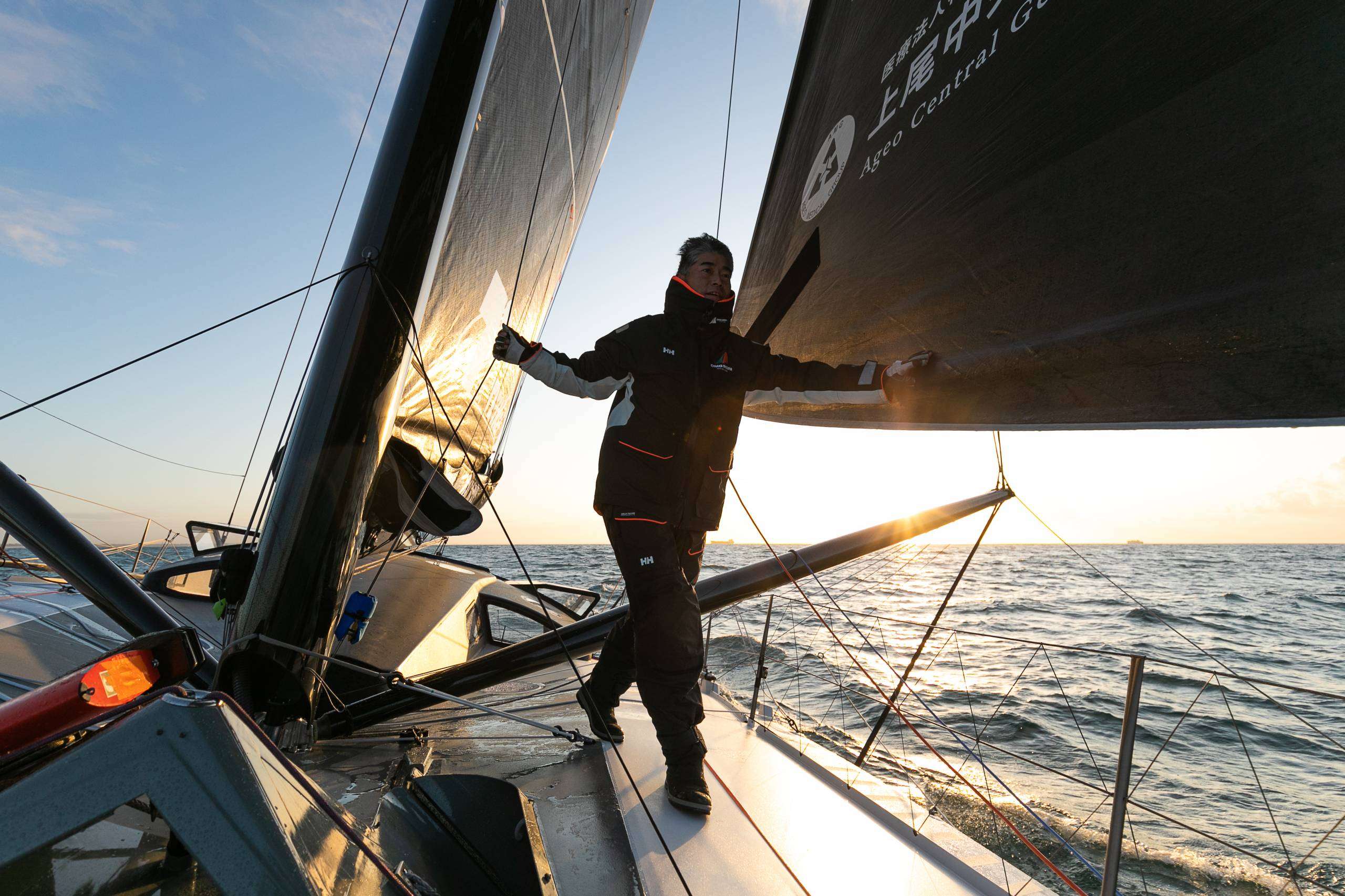 Living conditions during the Vendée Globe are infamously harsh

It didn’t take long for Shiraishi, who gained a love of sailing while growing up in the Pacific coastal town of Kamakura, to become a Vendée Globe fan favourite: he arrived on the start line in 2016 in traditional Japanese fighting attire, with a ceremonial sabre tucked into his belt.

All of Shiraishi’s boats are named Spirit of Yukoh in honour of his mentor Yukoh Tada, the pioneering Japanese sailor who committed suicide in 1991. Spirit of Yukoh had a fine start to the 2016 race but dismasted after 27 days, near the Cape of Good Hope. Unable to repair the damage, Shiraishi was forced to turn into Cape Town and retire from the race. 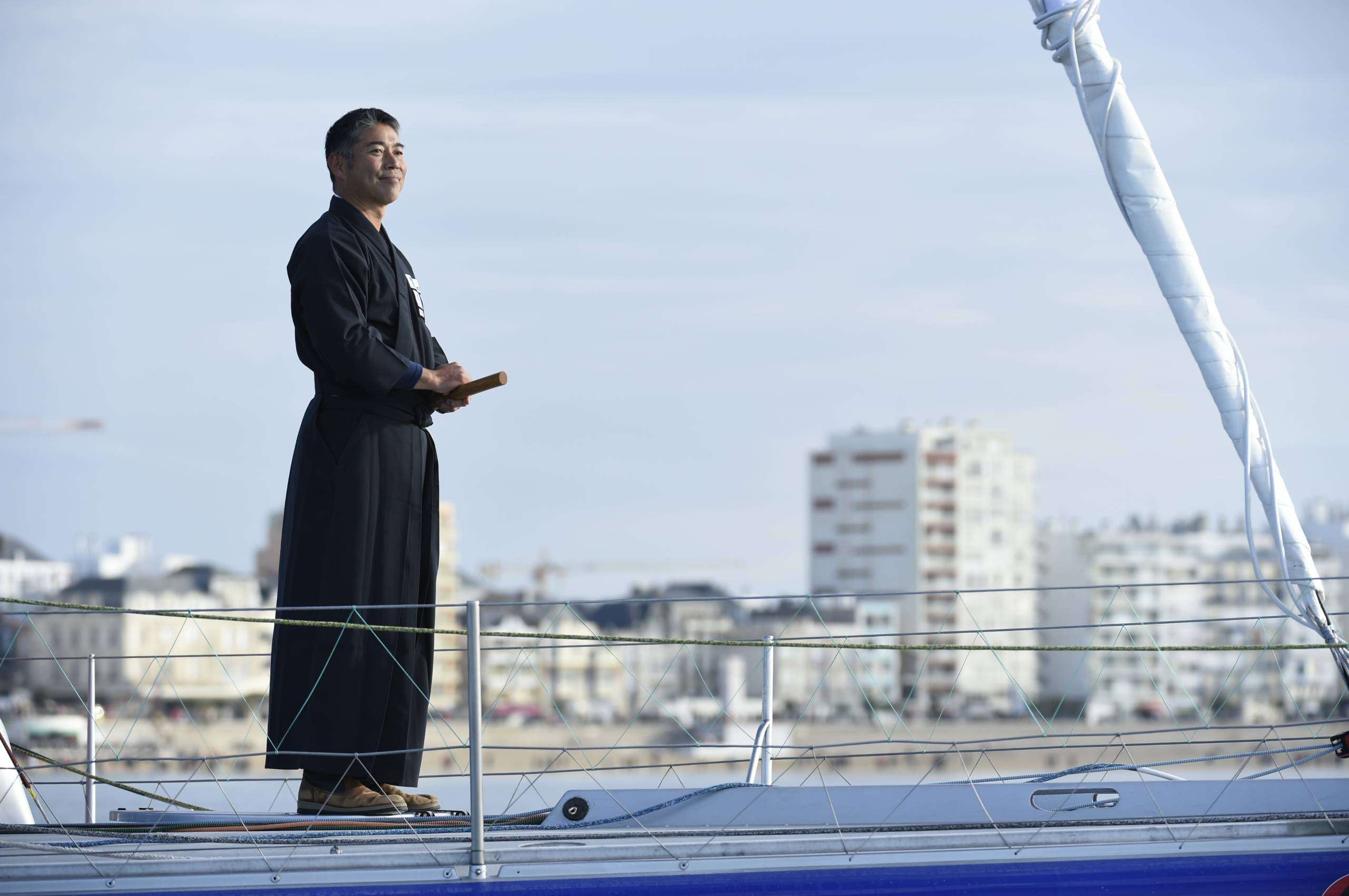 This time, Shiraishi is back to finish what he started – and he means business. Shiraishi has secured a new, top-level sponsor in DMG Mori and is armed with a powerful new-generation foiling IMOCA-class boat, designed by VPLP and custom-built for Shiraishi from scratch. The innovative 60-footer was designed in the same mould as Charal, the IMOCA of revered French sailor Jérémie Beyou.

While living conditions during the Vendée Globe are infamously harsh, the spiritual Shiraishi has still carved out enough space in his 60 feet to create a dedicated shrine and small meditation space.

With Covid decimating many sailors’ training schedules this year, we spoke to the relentlessly upbeat Shiraishi ahead of the race to find out about his preparations, and how he seeks to bring ocean racing to a new audience in Asia. 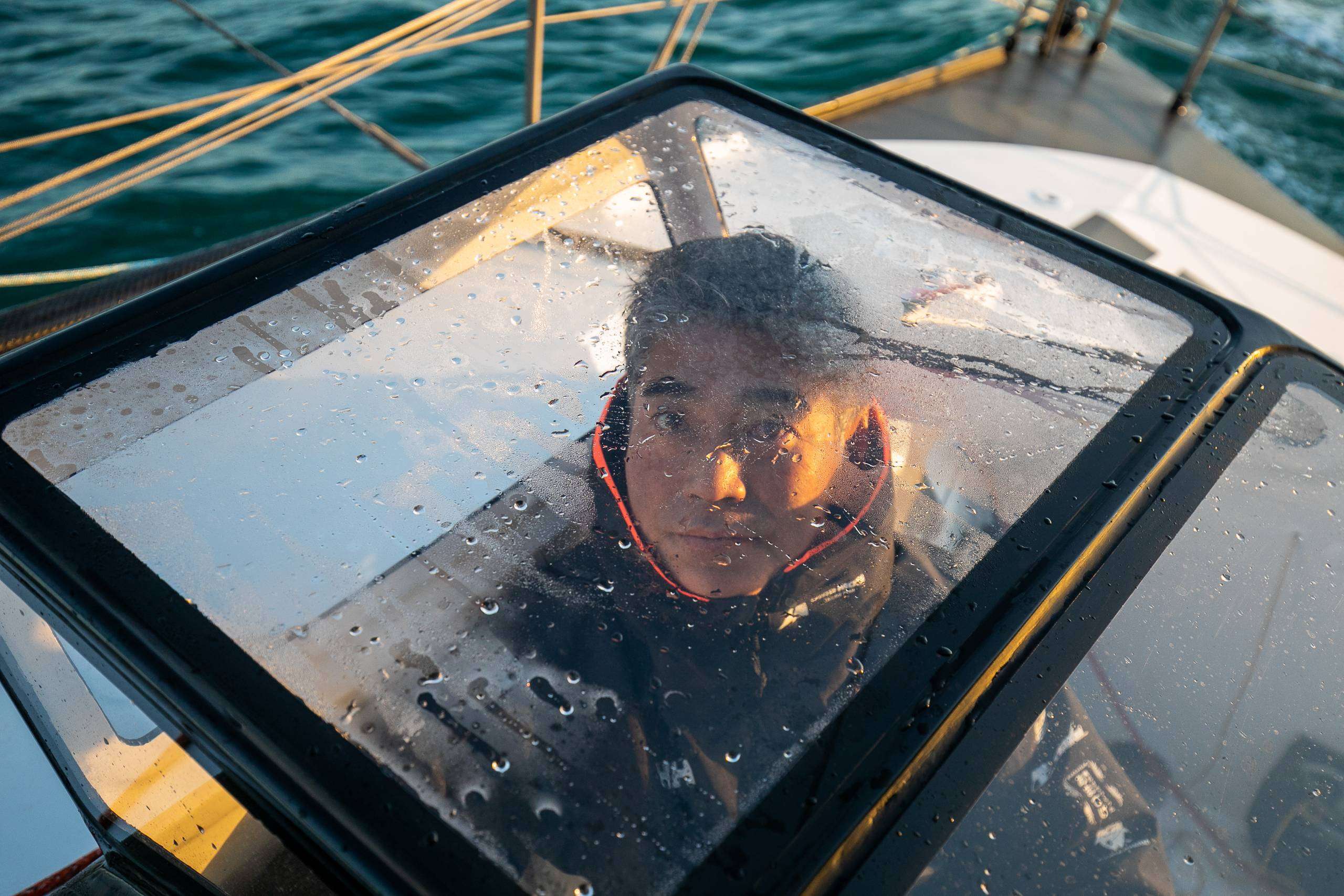 I want to make it so that more people from Asia participate in the Vendée Globe, but it’s not an easy path

How do you make your boat a home while at sea for months?
To be honest, of all the boats I have been on and sailed on, this is one of the most uncomfortable! The main problem we have at the moment is to make life on this boat easier. How to sleep, how to eat, and how to do navigation work. This is what we’re up to at the moment. I am sure the gods in my shrine are uncomfortable, and I am sorry for them. We’re trying to make it easier for them, too.

You placed 10th out of 20 solo skippers in the inaugural Vendée-Arctic race in July. How did your new boat fare?
The race (3,566 miles) was the longest outing for this boat; we’d done a solo navigation of over 2,000 miles and a solo navigation of 1,000 miles just before, but this was the first really long one.

To be honest, I had a bit of trouble during the race – it was a very good experience to have, and now we know what the problems [with the boat] are, and we can therefore work on solving the problems in time for the Vendée Globe itself. 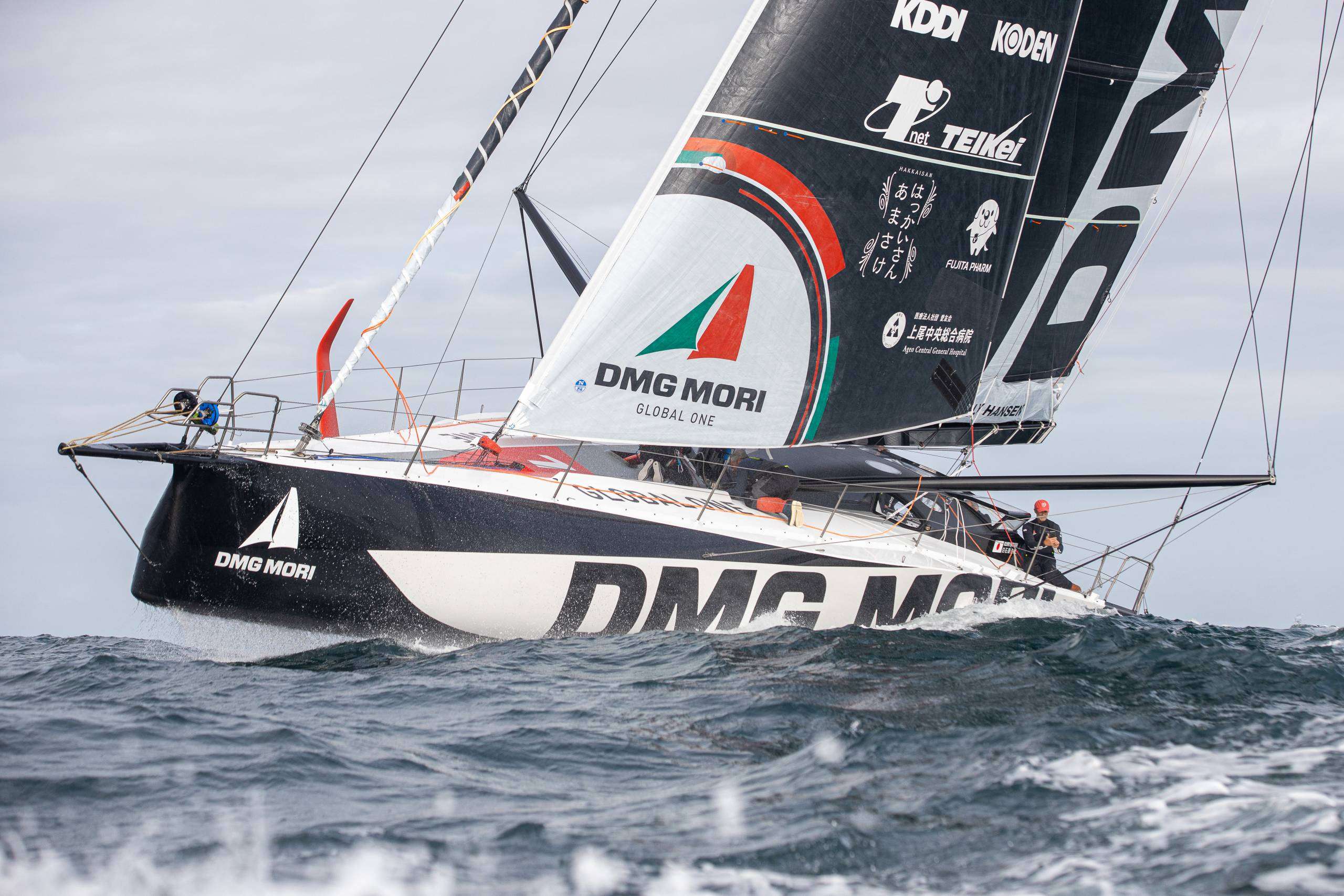 Shiraishi has a new-generation foiling IMOCA-class boat, from the same mould as Jérémie Beyou’s Charal

What does it mean to you, to be the first Asian sailor to participate in the Vendée Globe?
It feels lonely to be the only one! I want to make it so that more people from Asia participate in the Vendée Globe; it’s not an easy path. During the last Vendée Globe, we met a few people from China and Korea that wanted to participate, and we were very open to sharing our knowledge and telling them how we got to this point. We want more and more [Asian] people to be here with me. I hope this decade will be a time for Asian sailors to start coming up.

Covid has wreaked havoc on training this year. What impact has it had on you and the team?
The coronavirus outbreak has had an impact on our team, causing delays and all sorts of things. But everyone in the IMOCA class is the same; it’s no different from one to another, and we are all in this together.

What training have you managed to do?
Of course, during the lockdown in France, we couldn’t go sailing at all for about two months. Then to maintain social distancing within our team, we had to rotate the team. This meant we were a little late into our preparations; it affected how the boat was prepared. We were fortunate to be able to sail before the Vendée-Arctic race, but we’re still not quite there – we now know what we need to work on, and we will try to make it fully ready for the Vendée Globe. 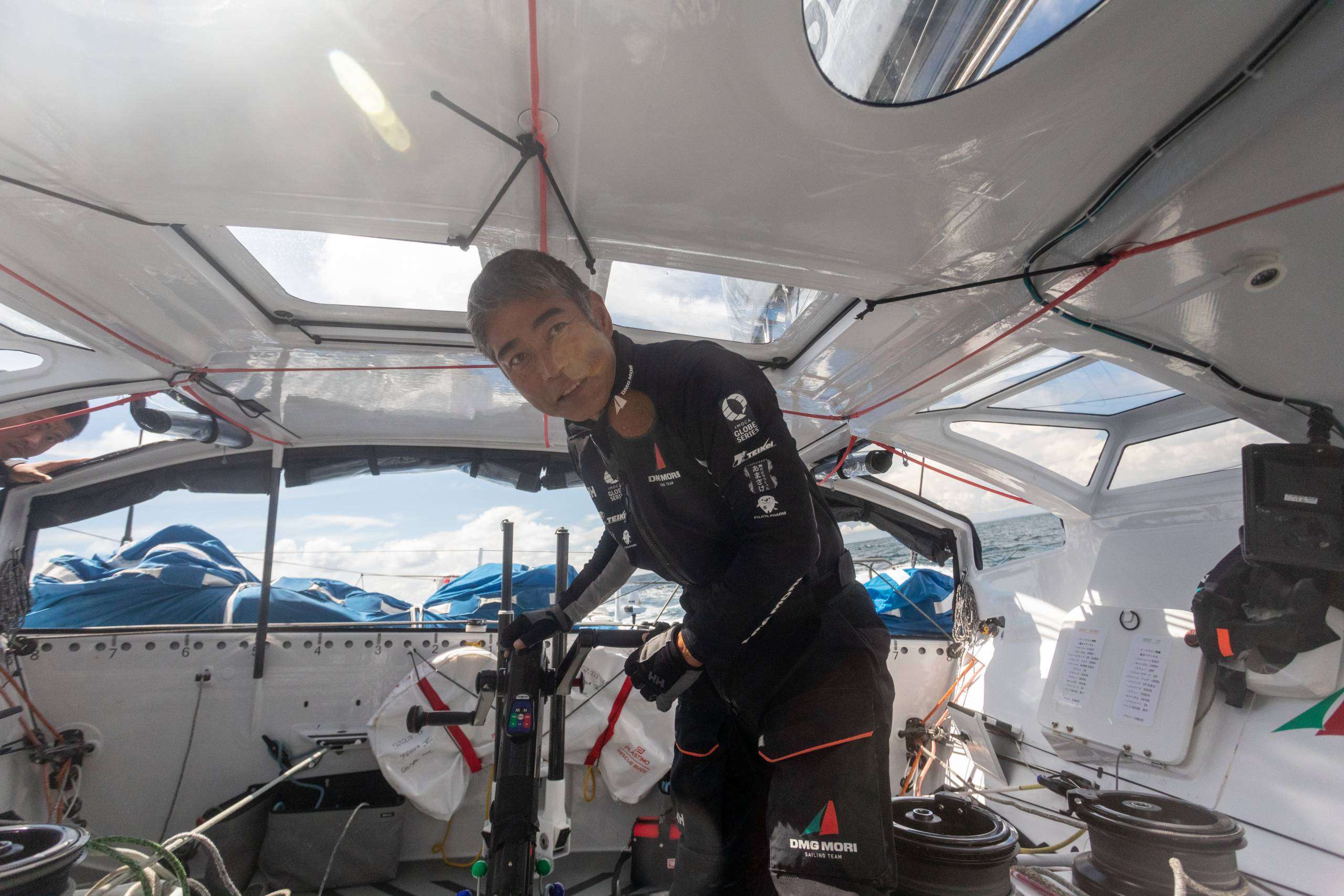 You suffered a surprise dismasting in the Indian Ocean in 2016 – talk us through what happened, and how you felt at the time.
First of all, the feeling at that moment was – let’s say it had taken me about 30 years to arrive at that stage, which was my dream. I don’t know really what the problem was, or why it broke – but I cried a lot. So much that my tears were dried out. At that time, when I arrived into port in South Africa, I realised there were a lot of people supporting me throughout this dismasting, and I told myself I needed to have a bigger team, a stronger boat – this is what I have now, so I am very happy.

Why are you returning to give it another shot?
It was a very powerful moment at the start of Vendée Globe in 2016; it was very emotional. I saw Asian people and Japanese people at the start of this race, which was phenomenal. I want to see what a full round race is like, and I want to have a drink with all my colleagues and teammates at the end to celebrate it! I just want to see everyone’s smiling faces. I am risking my life for this moment. 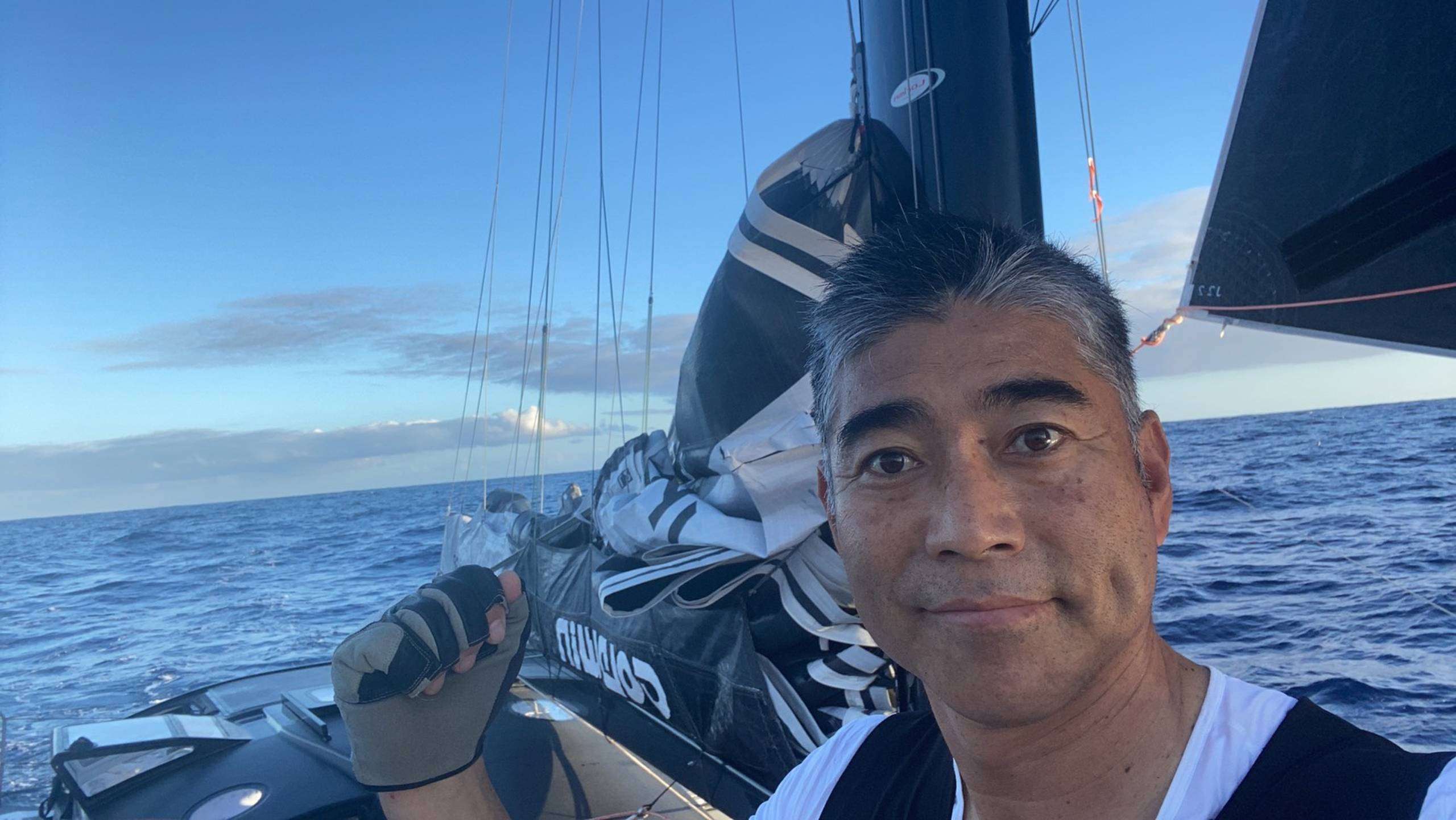 A selfie sent by Shiraishi on November 15, 2020, after he suffered a large tear to the mainsail. He was uninjured, and has since successfully repaired the damage with help of his shore team

Your new boat is designed by VPLP – talk us through some of the highlights.
First of all – this is a totally different boat; it’s a new-generation boat, and I can really feel that it in the way it goes. It goes much faster, the average speed is higher, and it’s much more powerful than the last boat. So right now, we know the boat is powerful, and we know it can go fast, but we need to estimate its limit, and we need to control how fast and how powerful the boat can be – this is what we’re working on at the moment.

For the design, we were lucky throughout that we were able to use the mould of Charal to build our boat. Of course, the inside is all our team’s design. 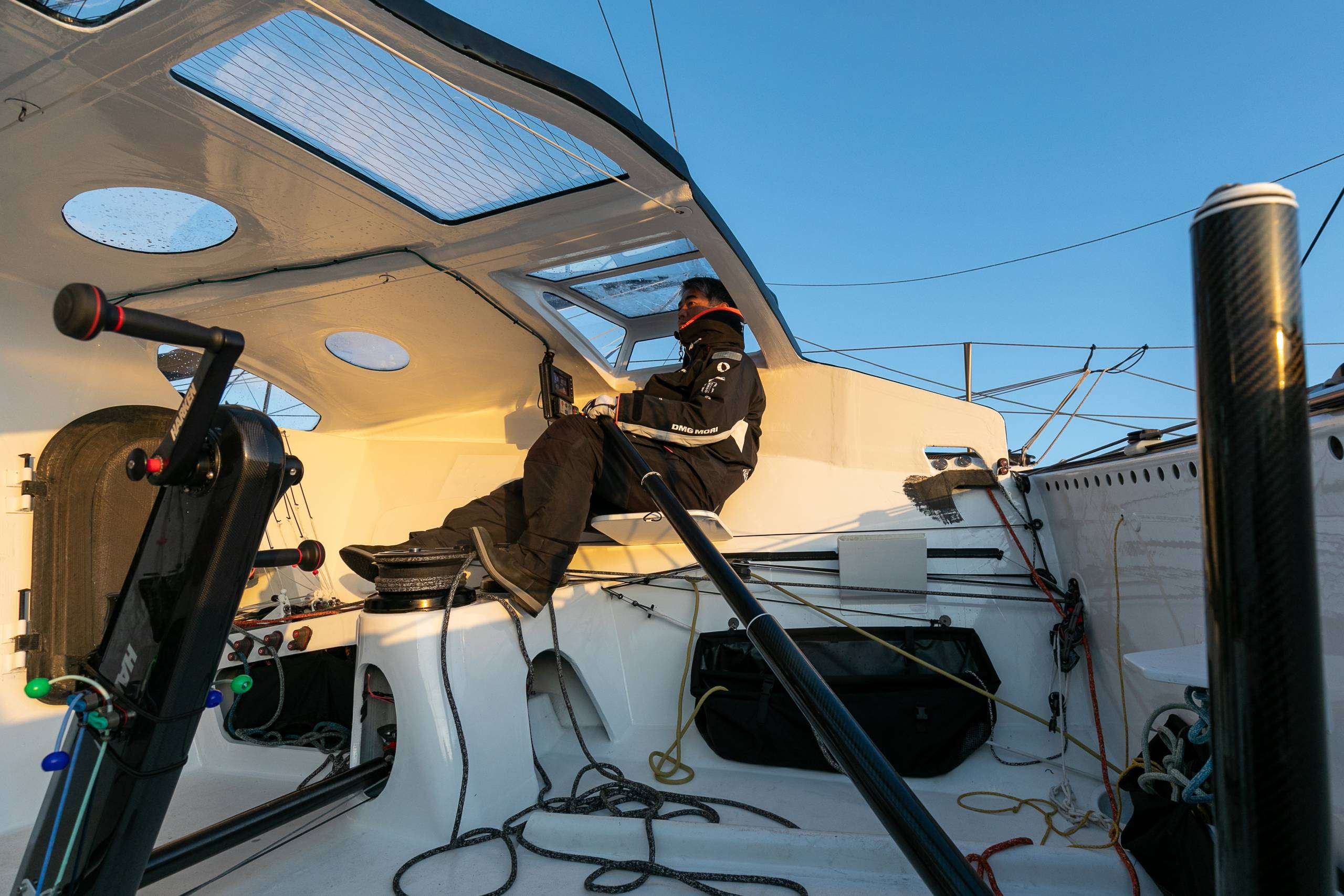 New-generation foiling boats are faster and lighter, but a large surface area leaves them prone to collisions with objects at sea

Is it true you suffer from bad seasickness?
Yes! It’s very bad – usually for the first week or so in particular. However, I am like a diesel engine; I start slow but get faster as we race on.

How did your early years lead you to become a professional sailor?
In Japan and other Asian countries, there was no great exploration era like there was in Europe. This is why there’s not a big culture of yachting around Asian countries.

I always wanted to go around the world on the ocean, regardless of the means, and that is why I attended a nautical high school. After I watched Yukoh Tada win the first BOC Challenge in 1983, I realised there was a way to travel around the world through sailing. And this is when I realised maybe I could become a sailor. Yukoh became my mentor some years later.

How is technology changing your experiences while at sea?
With these new technologies, we can send videos and photos and even do live interviews from the other side of the planet. It’s great. When I started sailing, there was no internet or information about sailing. Nowadays, it’s easier to get information, and I hope through such interviews it might be easier for a person who is not already in this world to become a part of it, if they’re interested. 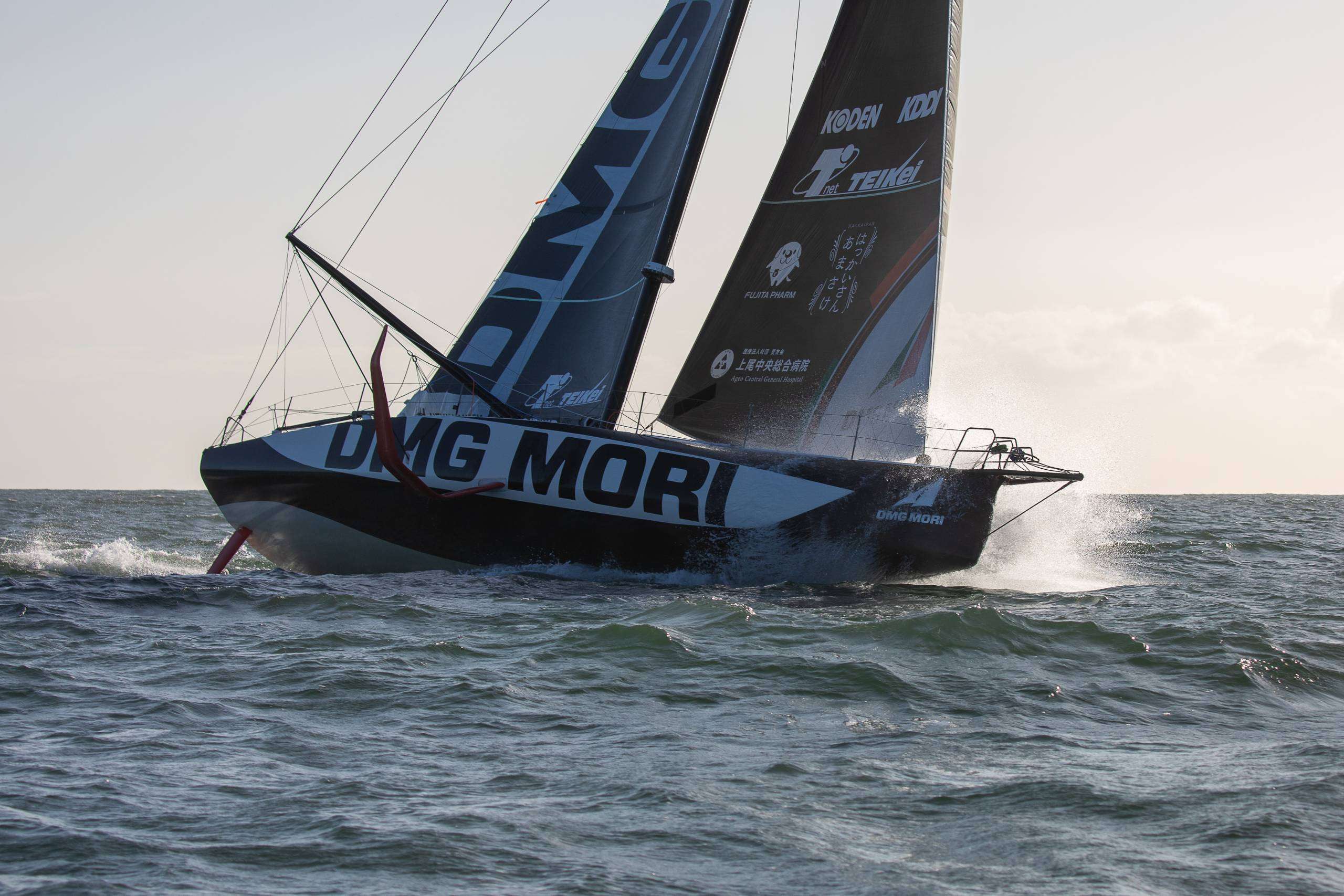 One Vendée skipper, Fabrice Amedeo, is using his boat to help monitor microplastic levels in the ocean. What do you think about the crossover of ocean racing and environmental research?
Of course, it’s vital to do this – we’re among the few people who can go into parts of the world that are still unexplored. It’s crucial that we, sailors, initiate these types of things. I am not doing as much as Fabrice, but I am in constant communication with the Japanese environment ministry, and I talk with them about microplastic problems and other problems as well. There is a big problem with plastic in Japan. I want to tell everyone that the ocean is a wonderful place to be, and don’t make it dirty.

Have you ever had any wild animal encounters at sea?
The funniest one was that I once rode on a whale in the Southern Ocean. My yacht was riding on the whale – the whale was about 40ft, which was the size of my boat, and I saw the head and tail of the whale on each side of my boat. That was pretty scary! Not many people believe me [laughs]. The boat I have is much faster now, and if I hit a whale with the speed of the boat now, it might become a much bigger problem. I see whales quite often when I am sailing, and it’s spectacular. I haven’t seen mermaids yet. I have dreamed of a few!

What’s next for you, after your return from the Vendée Globe 2020?
With the DMG Mori sailing team, the company told us they want to continue as long as they can. We are talking with the sponsors to see if they are interested in doing the Ocean Race, which will start in China for the 2021-22 race. But right after the Vendée Globe, w