When he finished in London on Wednesday 19th February 2020, shattering the Tea Route record by more than four days, Skipper Francis Joyon also brought the highly original and challenging IDEC Sport Asian Tour to an end. This was a major adventure, an epic voyage on a modern 31.5-metre maxi-trimaran with historic overtones of the Spice Route, the Silk Route and the Tea Route. 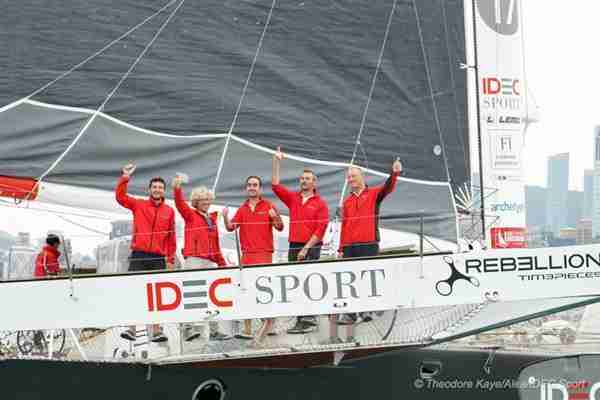 In four Herculean sailing tasks between Brittany and the edges of Asia and China, two new reference times were set and two records broken, ending triumphantly with an epic voyage between Hong Kong and London that can be summed up with some figures: 67 days of sailing, 35,000 nautical miles covered out on the water averaging more than 20 knots. 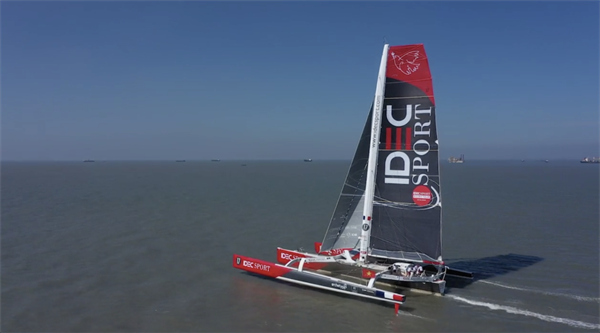 Joyon made it all look so easy. On 8th November he shattered his own record set 10 years ago on the Spice Route referred to as the Mauritius route, finishing after 19 days, 18 hours, 14 minutes and 45 seconds, improving on the previous record by 6 days and 10 hours.

Joyon, sailing solo, completed the 8,950 theoretical miles from Port Louis in Southern Brittany – sailing a mind-blowing 11,000nm out on the water, averaging 23.2 knots. The perfect start to this new campaign of records in Asia. The record was not one to take for granted.

“Our weather opportunity was far from ideal,” he explains. “But as we later saw, there was nothing really interesting coming up in the following days or weeks. We had to set off in order to stick to our schedule in Asia.” 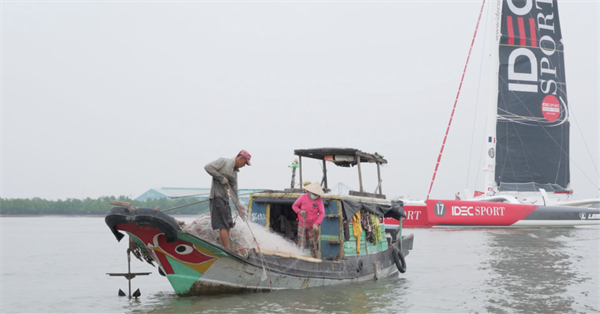 Twelve days after so successfully completing the first Act of his Asian tour, Joyon set out to tackle the second feat in his voyage to Asia and back.

On 21st November, he set sail with a crew this time from Mauritius on a route that has not been taken by modern ocean race boats, a route across the Indian Ocean to the China Sea, Vietnam and its capital, Ho Chi Minh City.

A new record attempt on an exotic route to the Far East, passing between Java and Sumatra via the Sunda Strait, Indonesia, Malaysia and the China Sea, before entering the Mekong Delta and the former Saigon that has been called Ho Chi Minh City since 1976.

More than 4,000nm of complicated sailing against the trade winds, with calms and lots of shipping in the China Sea, one of the busiest areas in the world. Living up to his friendly reputation, Joyon called upon some loyal sailors.

“Our Boat Captain, Bertrand Delesne, who has worked so hard on the boat over the past few months, is quite naturally with us,” he explains. “Also on the boat the same group that delivered the boat home last year after the Route du Rhum, with Christophe Houdet, who cannot remember whether he has crossed the Atlantic 60 or 70 times. Antoine Blouet, who has been working on the boat for some time and my son, Corentin, who knows the boat now like the back of his hand.”

This maritime adventure was full of contrasts and surprises. IDEC SPORT moored up in the former capital of ‘Cochinchina’ on 4th December after a theoretical voyage of around 4,000nm, but due to the weather they were forced to sail 5,400nm in the Indian Ocean and China Sea.

High speeds, periods of flat calm conditions, the long swell of the Southern Ocean, the choppy seas of the enclosed China and Java Seas, a maritime wilderness and extremely busy shipping lanes, the chilly weather  coming up from the Antarctic, the intense heat of Indonesia… They were looking forward to a big adventure, and that is something the five sailors certainly got. 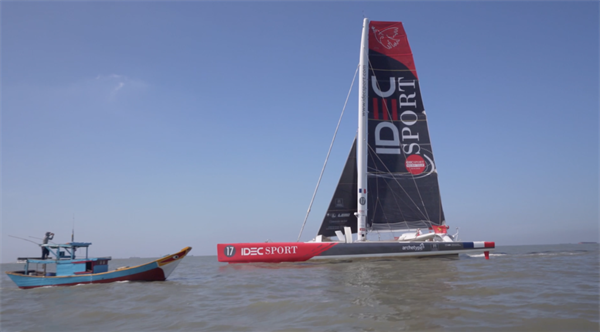 Joyon and his crew crossed the finish line of the new route between Ho Chi Minh City and Shenzhen on Tuesday 17th December 2019 with 844 theoretical miles sailed averaging 12.3 knots, while out on the water they sailed 1,011.81 miles at an average speed of 14.8 knots.

After they entered the Pearl River Delta separating Macau from Shenzhen and the finish line, they said that although this leg was the shortest, it was the most difficult in terms of the physical effort.

“For 36 hours, the boat, which has experienced some of the world’s nastiest seas, was punished like never before,” Joyon admits. “With winds coming straight at us at more than 35 knots and hellish seas, the boat slammed continually in the rough seas. We were well and truly shaken up and when we finished passing the dozens of islands blocking the way to Shenzhen, it was a huge relief for the whole crew.

“Thousands of fishing boats, a bit like off Vietnam, were working in the area with their long lines spread right out. An amazing sight! We are pleased that it is over now. For two months, we have dedicated ourselves to the boat, and a short break will do us a lot of good, before we tackle the Tea Route and the record held by Giovanni Soldini after the festive season.” 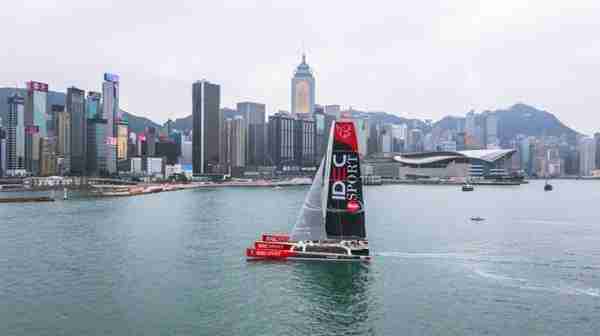 The longest coast-to-coast sailing record apart from the round the world race, the Tea Route was something that intrigued Joyon and his men when they set sail from Hong Kong, sailing from East to West against the prevailing weather systems.

The absence of the trade winds in the Indian Ocean, and the threat of cyclones, meant there were a number of uncertainties about the ability of the giant trimaran to do better than Giovanni Soldini’s MOD70 Maserati, as she was particularly at ease in light conditions.

But by smashing the record time between Hong Kong and London on Wednesday 19th February, in just over a month of sailing, Francis Joyon and his crew of four not only beat Soldini’s time by more than four days, but practically divided by three the time it took the big clippers of the 19th Century. 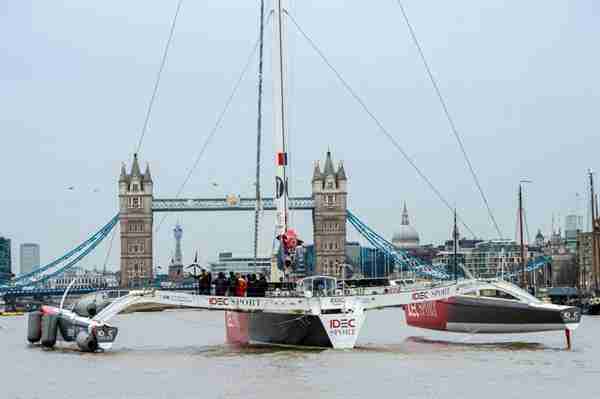 Throughout the 15,000nm sailed at an average speed of 20.7 knots, the maxi-trimaran went through almost every wind and sea condition, sunshine and cloud, and temperature range. Some smooth sailing, some traps, surprises, a bumpy ride at times, and uncomfortable conditions. The China Sea, the Indian Ocean, the South and North Atlantic…

The five men sailed more than halfway around the world at record speed, pushing back the frontiers of performance. Looking for sheer speed in the China Sea and Indian Ocean, rounding without hitch the tip of South Africa, showing patience and inspiration in the calms in the South Atlantic, and a magnificent climb back up the North Atlantic. 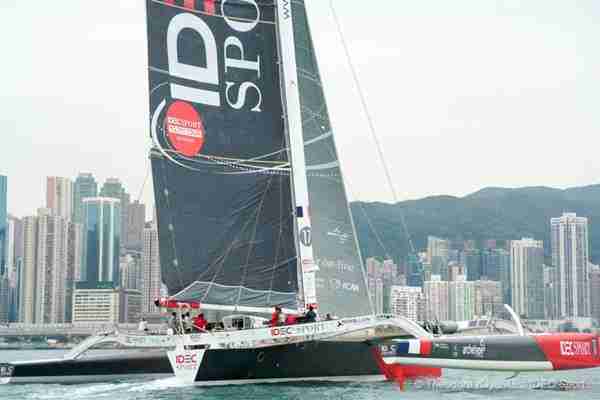 Bertrand Delesne: “This was really a great voyage, an epic journey. We saw just how huge the oceans are and it is hard to imagine what sailing must have been like before the 21st Century. This was a rare opportunity in the life of a sailor.”

Corentin Joyon: “32 days of non-stop sailing. This has been my longest trip. I am in great shape. This was a fantastic adventure, with a marvellous crew. We got on with each other, worked well together and everything was perfectly coordinated. For the first time I saw some albatrosses. It was fascinating to watch them. It is nice to think there are still some untouched places on Earth.”

Christophe Houdet: “It was a huge pleasure, really enjoyable to sail in these places in this way. We discovered the wonders of the China Sea, tropical islands with some incredible colours, with deserted, paradise beaches. Getting to see those places on a boat transporting you at high speed is a privilege and we enjoyed every second of it. There was a friendly atmosphere aboard with everyone pulling together and being kind to each other. Francis was always watching out for squalls and was ready to act. IDEC SPORT is a unique and fantastic boat.” 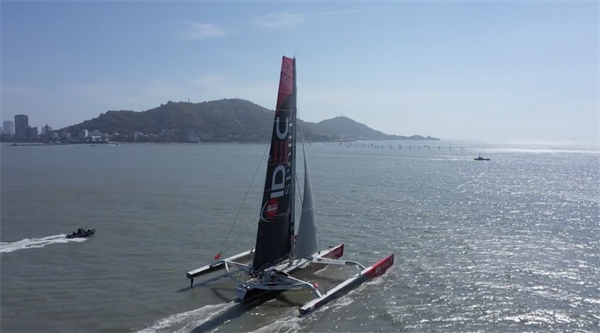 Check out their entire adventure through Asia