Nightlife mogul Allan Zeman has been one of Hong Kong's most familiar faces for five decades. The businessman explains how his family life is firmly interlocked with quality time on the water 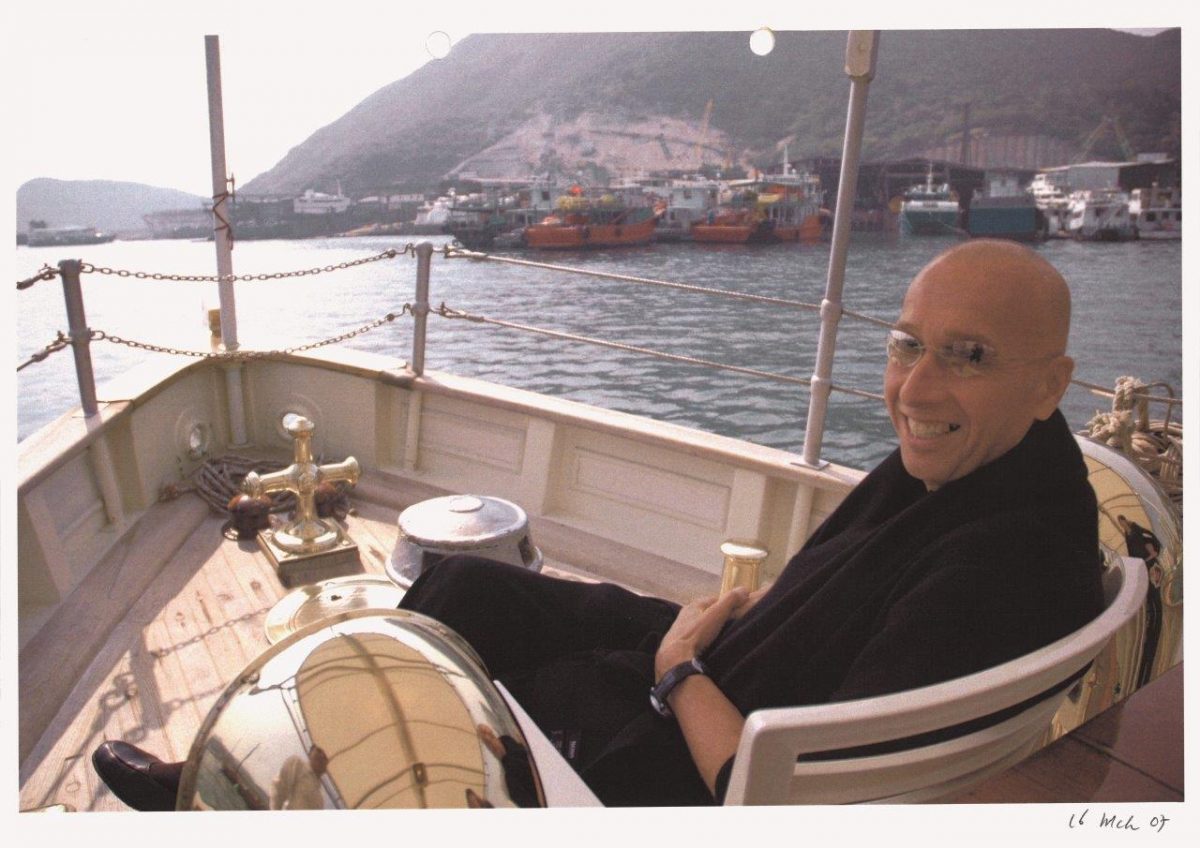 “I love boating more than ever these days, as I haven’t left Hong Kong for three years – except to go to Beijing – because of Covid,” says Allan Zeman.

We’re speaking to the multifaceted entrepreneur in his bright, airy office surrounded by views over Hong Kong’s Central district. “Every weekend, I get the chance to go out with my family and friends,” he continues. “You can’t leave Hong Kong without coming back and going through quarantine, but you can go out on a boat and come back.”

Zeman is synonymous to many in Hong Kong and Asia as ‘Mr Lan Kwai Fong‘ – regarded as the man who transformed a couple of small streets in Central into a hub of on-trend restaurants and bars, an area often referred to as LKF. But Zeman has so much more than that going on these days. 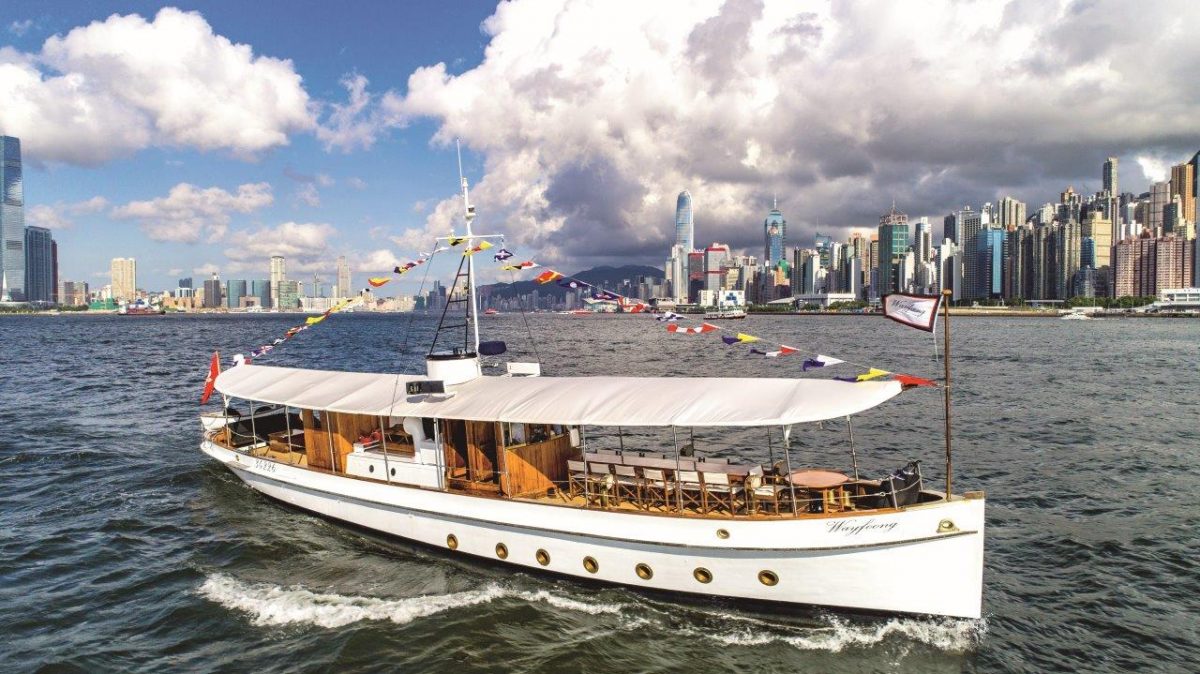 He says he is not keen on overnight stays on 7Zeas, his Sunseeker 110-footer (32.5m) of about three years, “because of my lifestyle, I guess. With Lan Kwai Fong, I always have something going on in the evening. And I do a lot of government work now. There are so many different things going on: I also have hotels in Phuket, a house in Thailand myself, a beautiful property development project in Sai Kung in Hong Kong – residential villas…” he trails off.

What sounds like more than a handful of projects described in our conversation is merely the tip of the iceberg. As well as sitting on various government boards and committees, having become a naturalised Chinese citizen in 2008, chairing the Lan Kwai Fong Group and Wynn Macau (as non-executive chairman), Zeman also owns Andara Resort & Villas Phuket, Aquella Phuket, Paradise Properties Group and Sudara Bangtao (both in Thailand). Zeman also has board and advisory roles in Ocean Park, Alibaba Entrepreneurs Fund and Foshan Tourism Group, and is a non-executive director for TVB.

Until a few years ago, the Zeman family enjoyed a beautifully converted vintage steamer called Wayfoong, once an entertainment boat belonging to HSBC

With all of those commitments, it is no wonder that Asia-Pacific Boating‘s interview was postponed a couple of times, or that one important call of the several that vibrated silently on his mobile phone had to be quickly taken during our meeting. Zeman admits he would find it a serious challenge to relax overnight on the Sunseeker, even if he gave it a go.

“On weekends, my wife relaxes and enjoys [our half or full-day cruises]. But from the moment I get on, I may be lying down up top, but I’m [still] on my phone,” he says before adding: “but I enjoy it! My whole life is land-based, pleasure-based and work-based – my work is my pleasure, though.” 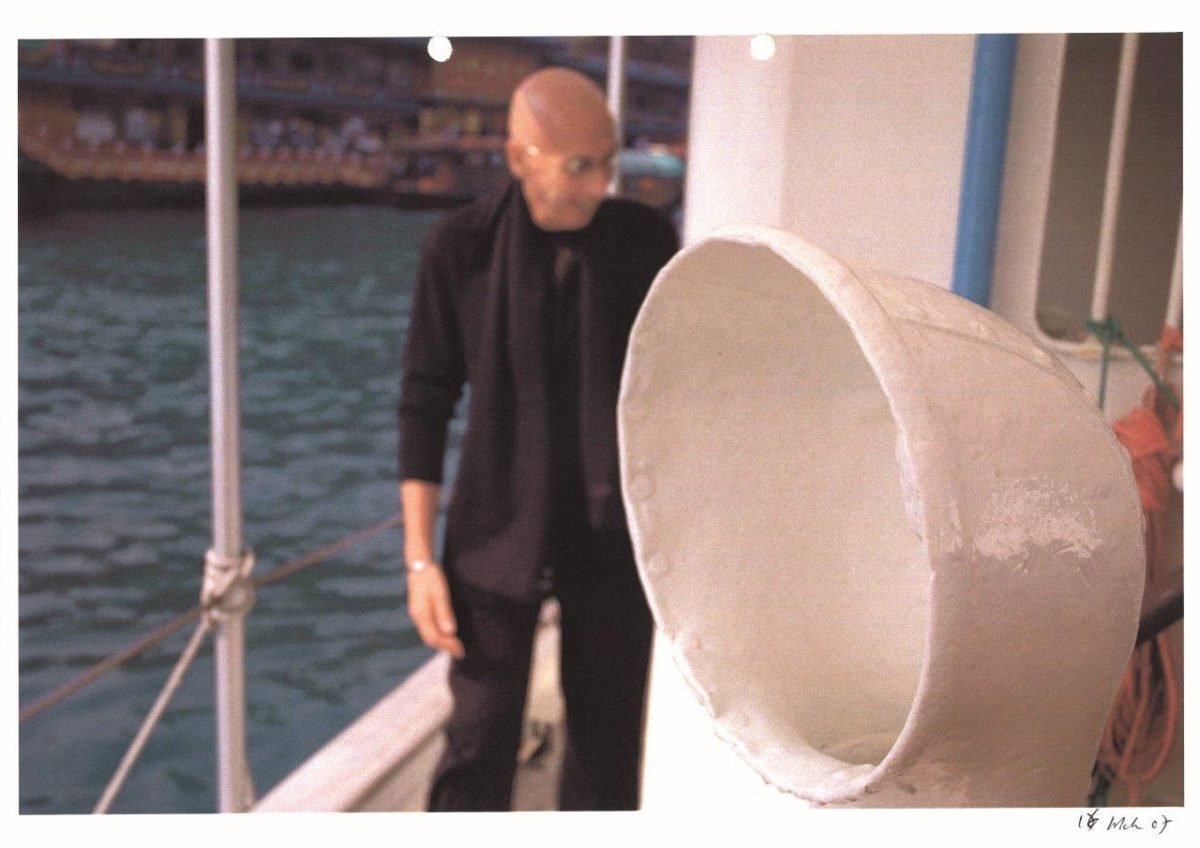 Zeman on deck, aboard Wayfoong

He may not find the time for overnight yacht cruising in Hong Kong waters, but Zeman says he has enjoyed being a passenger of cruise liners in the past: “I’ve enjoyed going on some of those for a week or more now and then.” One memorable cruise was aboard the Italy-built Seabourn Odyssey. “It was for a good friend’s 80th birthday,” he says, “a famous Australian magnate – on a cruise that went from Greece to Italy; it was something special.”

And there is now another invitation for Mr and Mrs Zeman to attend the 85th celebratory cruise with the same friend on the Seabourn Quest. “This time, it will start in New York, go up the coast to Boston, Providence and around to Halifax, Nova Scotia and Quebec in Canada, finishing up in Montreal,” he explains. Zeman hasn’t been back to Montreal for about 20 years; he has a sister who lives there, so he may stay on to visit her. But, like the last longish cruise, he will likely be wrestling with an urge to depart the two-week trip to attend to business and other matters.

Canada-raised Zeman struck his first success in Hong Kong in the clothing and fashion business, spawning 35 international offices outside the Hong Kong headquarters. And, while that was ticking over nicely, he bought a shipyard called Mesco in Aberdeen, the heart of southern Hong Kong Island’s boating community. 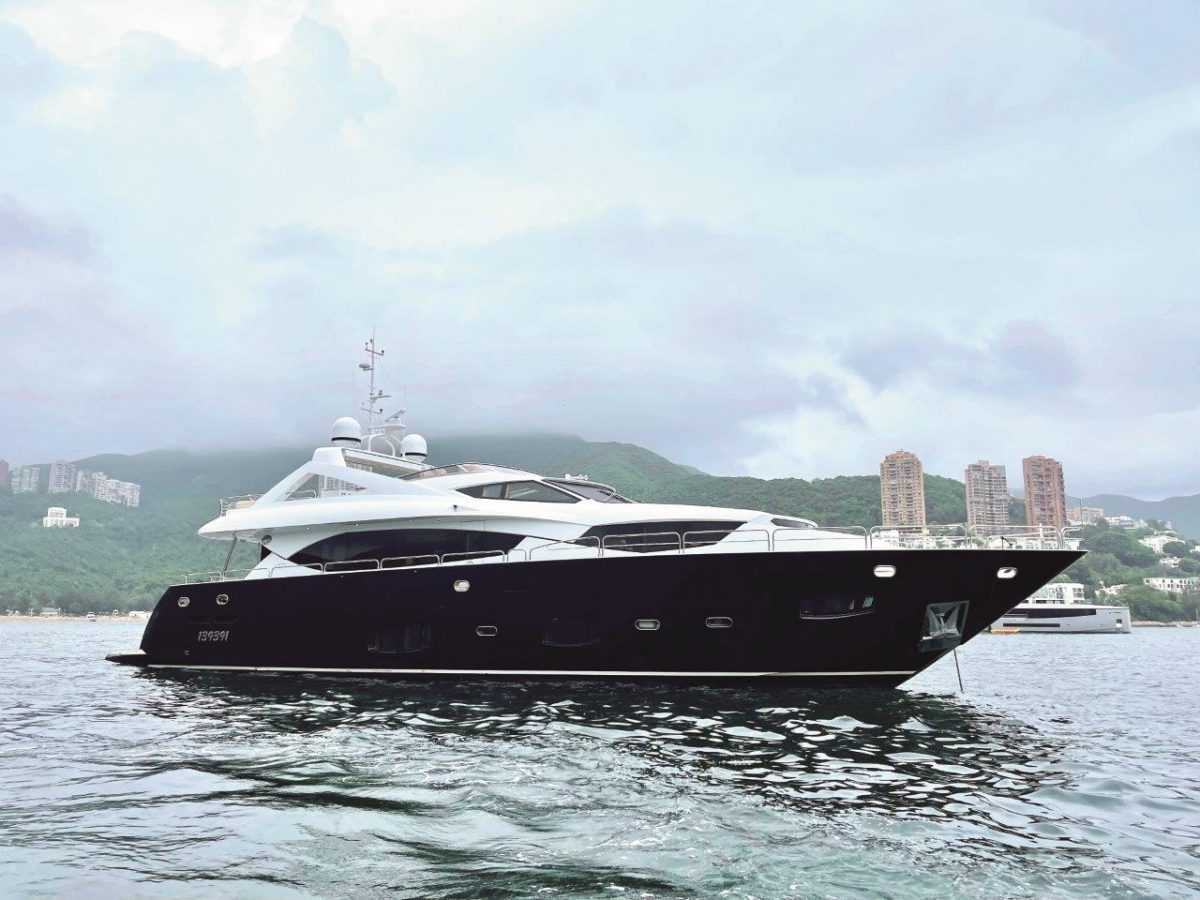 Mesco specialised in wooden-hulled pleasure junks, which were very in-demand from the late 1970s. “The first boats I owned were wooden junks, like everyone else,” Zeman says of his first foray into leisure boating. “It was really wonderful going to the shipyard once in a while, and I kept my own boat in Aberdeen, nearby.” He sold the shipyard in the late 1990s.

Until a few years ago, the Zeman family enjoyed a beautifully converted vintage steamer called Wayfoong, once an entertainment boat belonging to HSBC. “That was really a piece of art. I loved that boat,” he recalls fondly. “My wife renovated it. It was built in 1930 and had been sunk by the Japanese in the [second world] war. We probably had it about six years.”

“I rarely use it,” Zeman says of his Sunseeker Superhawk 50, Baby Zea. “It’s about 12 years old – I’ve had it since it first came out, and it’s really fast.”

Before that, he had built yachts in Taiwan. “We built a really beautiful custom yacht at Horizon [shipyard] – which was not as developed [a brand] as it is now – designed by an Italian designer Tommaso Spandolini, recommended by an old contact at Mesco shipyard in Aberdeen.”

Unfortunately, this 26m streamlined yacht, Zea Breeze, was famously stolen from its Hong Kong berth in the 1990s when luxury cars were also being whisked away on fast speedboats to be sold in mainland China. It turned up worse for wear in Taishan, Guangdong, in 1995. “It was a wreck,” Zeman remembers. “It turned out it was being used as a casino in China. But as the government cracked down on these activities, the boat was returned to Hong Kong.” 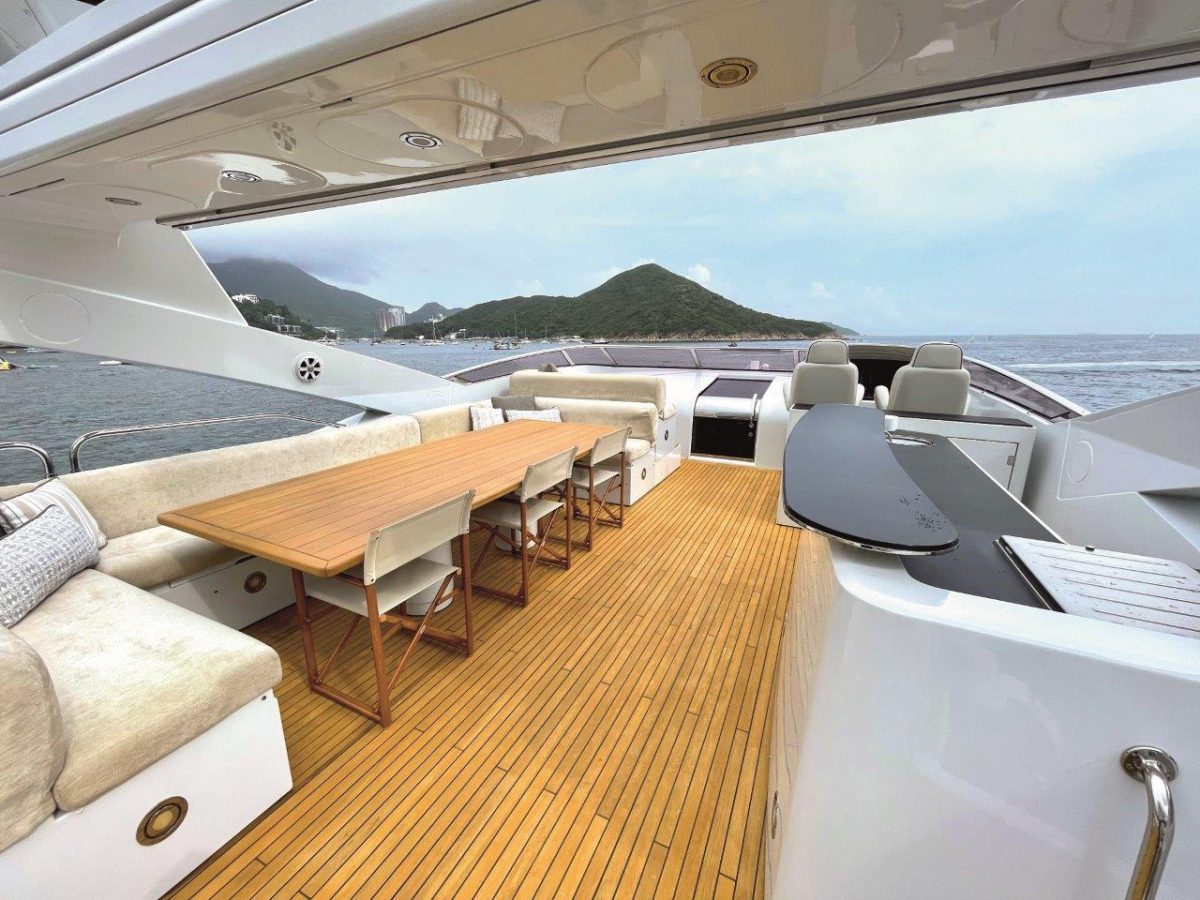 Although he has never been interested in owning a sailing yacht, Zeman has enjoyed some memorable experiences aboard a few. “I remember being on a 300-foot sailboat in Europe – one of the largest ones in the world at that time, owned by a friend, a very well-known individual in the US who had it for the summer,” he recalls with a smile. “It was first-class; there were 15 crew members looking after us.”

Another megayacht (motorised) was that of Steve Wynn, Zeman’s business associate, friend and co-founder of Wynn Resorts. “Every summer, we used to go cruising in the Mediterranean with him for one or two weeks,” Zeman says, “he always had megayachts.”
As well as 7Zeas in Hong Kong, Zeman also owns a UK-made Sunseeker Superhawk 50 called Baby Zea. “I rarely use it,” he says, “it’s about 12 years old – I’ve had it since it first came out, and it’s really fast.”

“We built a really beautiful custom yacht at Horizon shipyard, which was not as developed a brand as it is now, designed by an Italian designer, Tommaso Spandolini”

His fond memories of leisure time spent on the water in the territory stretch back decades. “Lovely beaches always come to mind from years on boats in Hong Kong,” he says, “sometimes meeting friends by chance who are also out with their yachts in Tai Long Wan, which I used to go to a lot. We’d enjoy the beaches with the kids and watch the cattle that would walk over the hills there. We also had a [US-made] Nautique that we used for water-skiing – my wife and kids really enjoyed that. 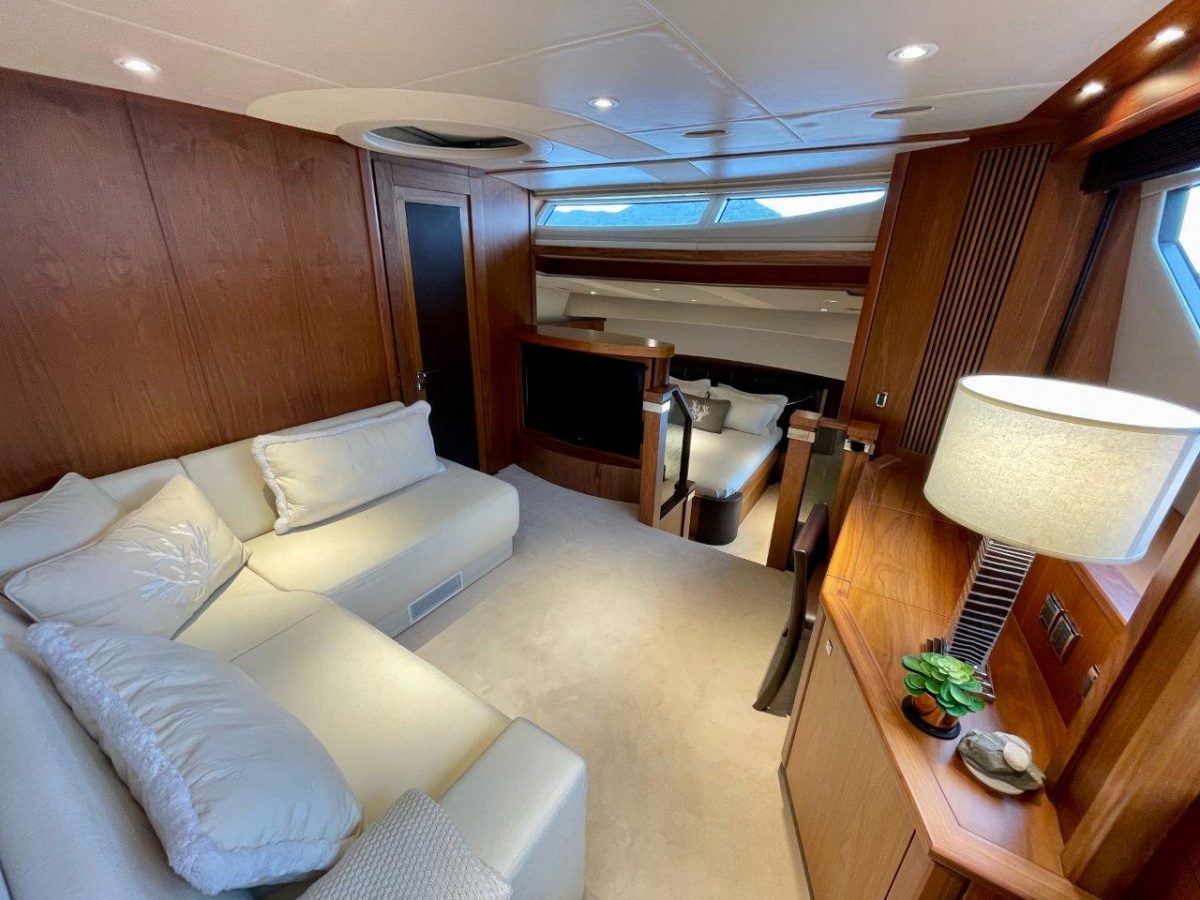 “Today, I’m so busy; I head for Deep Water Bay, Repulse Bay, or just going around Aberdeen is great. “My house overlooks the South China Sea at Chung Hom Kok, so I see Stanley Bay from there – seeing the sea from our yacht or home is so beautiful.”

In Phuket, Zeman owns an Italian 32.6m motor-cruiser. “I did have another 90-footer there, but I sold that about five years ago,” he explains. The Baglietto, named Celebrity, which has a full-time crew, is chartered out to Andara Resort guests when Zeman and his family are not staying in their 80,000sqft Phuket waterfront home. The Zeman family have enjoyed cruising around the Thai southern coast and in nearby Malaysian waters, particularly around Langkawi Island.

Does Zeman have a wish list of boating or cruise-liner destinations to visit? How about an Antarctica cruise, I wondered? “My wife would like to go there, but I’m not so sure – it’s too cold,” he says, laughing. “I’m a hot-weather guy.”

Boating, he says – and enjoying reachable beautiful waters and coastlines – will always be a pastime. “It’s what I’ve always done, for about 50 years, since being in Hong Kong. My children grew up going on boats since they were babies – it’s a big part of our lives.”