Chlo√© Zaied founded Hynova, an ambitious French start-up developing a startlingly quiet hydrogen-powered, zero-emissions yacht. Her display at the 2021 Cannes Yachting Festival showed that there is a growing appetite for a hydrogen solution to the climate crisis 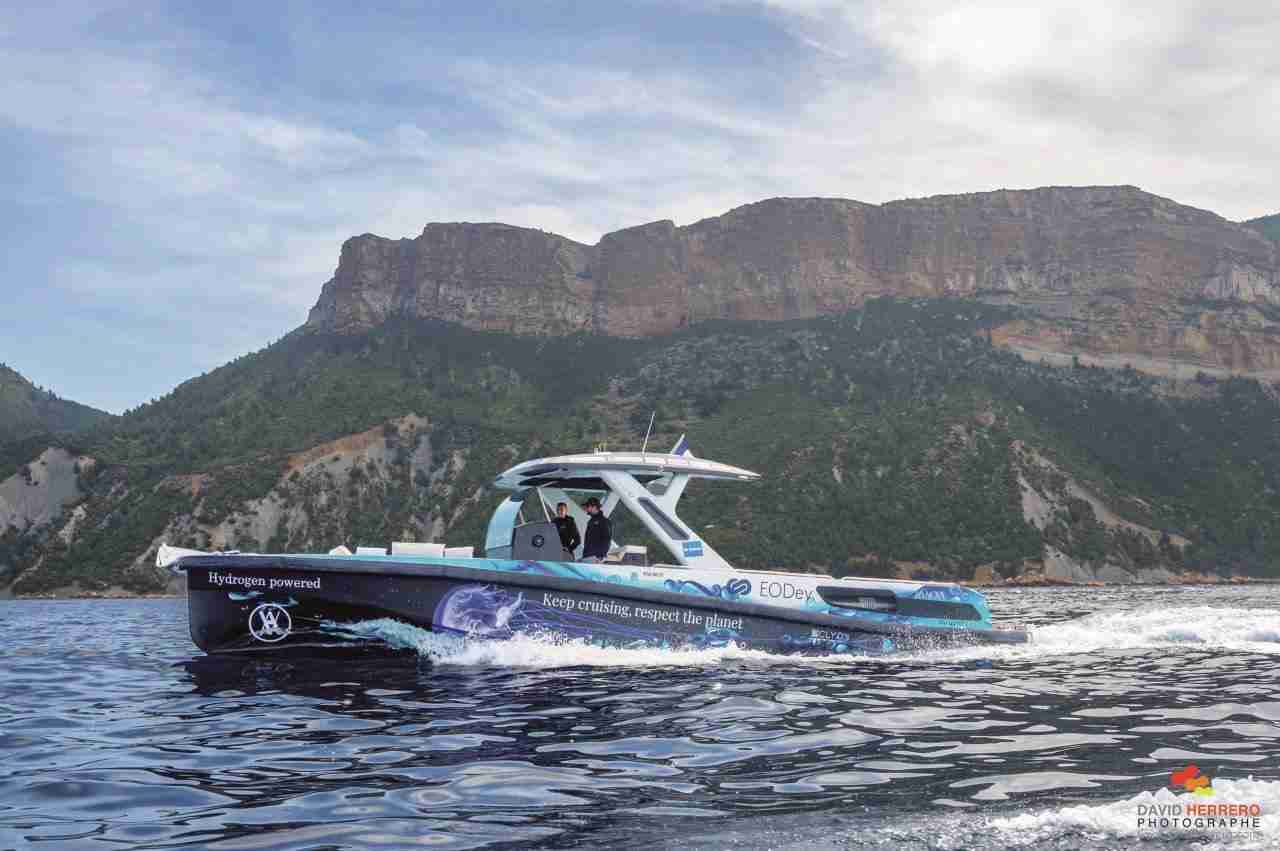 “Every day was a challenge, but you can decide to stay focused on the bad things or the good things. I decided on the second one.” So says Chlo√© Zaied, a French yacht captain, founder of Hynova Yachts and developer of the world’s first hydrogen-powered open motor yacht, the Hynova 40. Her achievement is remarkable: Hynova has gone from concept to prototype in less than two years, and soon moves to production. “All the [yacht] industry was impressed by what we did in a year. They are interested, but I don’t know if they are ready to shift to hydrogen in the short term,” Zaied says. But given Zaied’s powerful optimism and undeniable energy, change may come sooner than expected. At first glance, the Hynova 40 is unremarkable. It is a simple-looking 40-foot (12.2-metre) open motorboat, much like the hundreds of other yachts floating at the docks during the 2021 Cannes Yachting Festival. But open the large back hatch, and you see the difference. Where there would typically be a set of diesel engines, there is a hydrogen fuel cell and a set of batteries. Where there would be diesel tanks, there are three large hydrogen fuel tanks.

During our trial, we got a taste of the quiet, vibration-free running of the yacht. Only a small hum from the electric motors can be heard

On our sea trial, we were joined by Azimut-Benetti Group executive vice president Giovanna Vitelli, who was interested to find out more about the technology behind Hynova. During our trial, we got a taste of the quiet, vibration-free running of the yacht. We can hear only a slight hum from the electric motors, and the wake of the boat quickly drowns it out as we power up to 20 knots and do gentle figure-of-eights in the Bay of Cannes. The Hynova booth at the Cannes show was modest but always busy. Zaied herself spent most of the show running her prototype around the Cannes harbour for a mix of intrigued guests, industry insiders and journalists. “Cannes was incredible because it was my first time as an exhibitor, and it was also the big comeback after two years with no boat show,” said Zaied, who founded Hynova in January 2020. “The energy was very good, especially for us and this new-generation boat. We also signed a pre-order, so it means customers are ready to change their way of cruising; we need the early adopters to lead by example.” At the heart of the Hynova 40 prototype is an electric-hydrogen hybrid motor called the REXH2, a zero-emissions engine that is nearly silent and intended for series production. The engine was developed by EODev (Energy Observer Developments), a spin-off from the Energy Observer boat that is currently circumnavigating the world on hydrogen power by creating its own hydrogen using renewable energy sources. 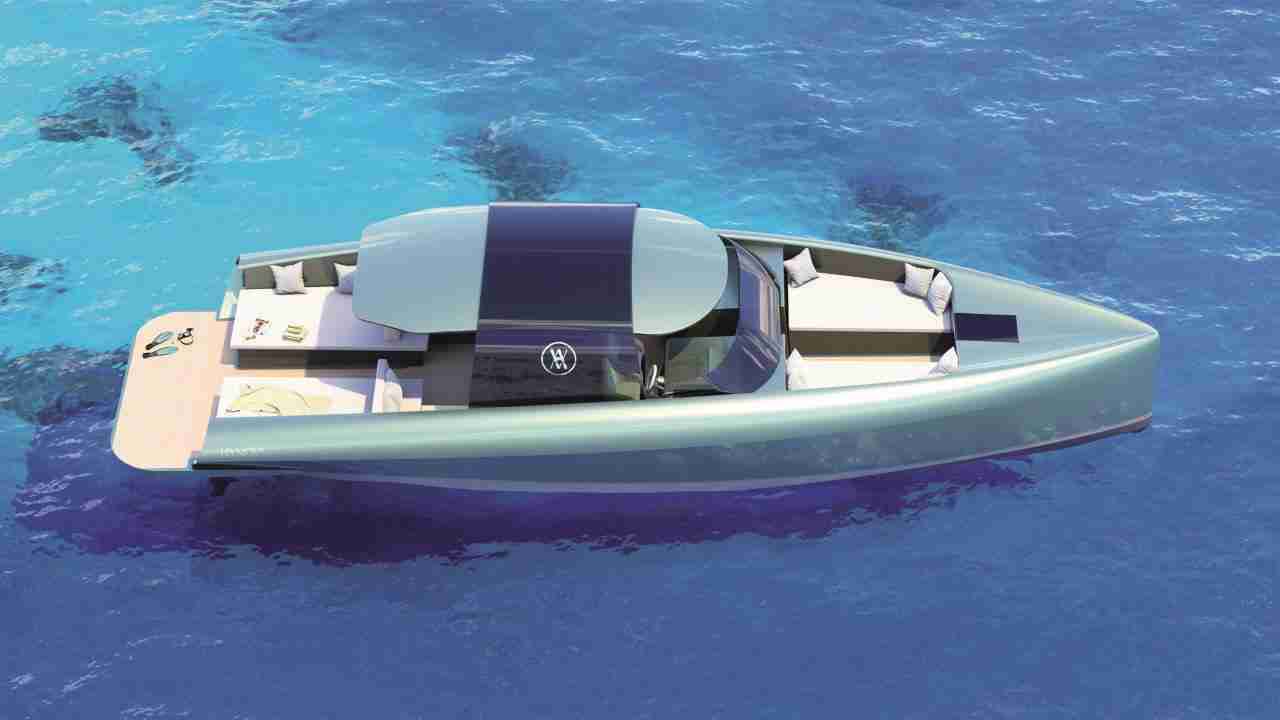 The Hynova Explorer 42, featuring a sleeker design by Chlo√© Zaied, is due to begin production in late November

Toyota, which has been pioneering hydrogen propulsion power for years, became a shareholder in EODev in 2021. Zaied says she also managed to secure an angel investor to help produce her prototype. Hydrogen fuel cells generate electricity by mixing hydrogen stored in a tank with oxygen from the air. Water vapour is the exhaust. In a mirror of the auto industry, battery-powered electric yachts already had their own section at the Cannes show this year. But the Hynova 40, like the Toyota Mirai, seems to offer something more. And if the auto industry is an indicator of where the boating industry is headed, hydrogen may be the future. In its 2020 survey of auto industry executives, KPMG found that 84 per cent of executives think that fuel cell electric vehicles (FCEVs) will “experience their breakthrough in industrial transportation (buses, trucks, ships),” a five per cent rise from 2019. In addition, the International Energy Agency reported that global fuel cell electric vehicle sales, though less than 1 per cent of zero-emissions vehicles, doubled to over 12,000 units sold in 2019. The Hynova 40 is fuelled by a pressured hose, which deposits hydrogen gas at 350mbar pressure into three huge tanks in the Hynova 40. These take up a considerable amount of space compared to a diesel-powered yacht and are the key drawback so far. The fuel cell powering the yacht is the latest generation of Toyota fuel cell, the T-Module, which provides up to 80kW of power. It is backed up by three 44kW batteries (lithium-iron-phosphate) and two electric motors developing 184kW each – approximating the power of twin 250hp diesel engines. The engine and drive train are comparable in size to a diesel engine and drive train.

The Hynova 40 that we tested at Cannes was a prototype. A better hull is being designed, and improvements in range are likely to come sooner rather than later 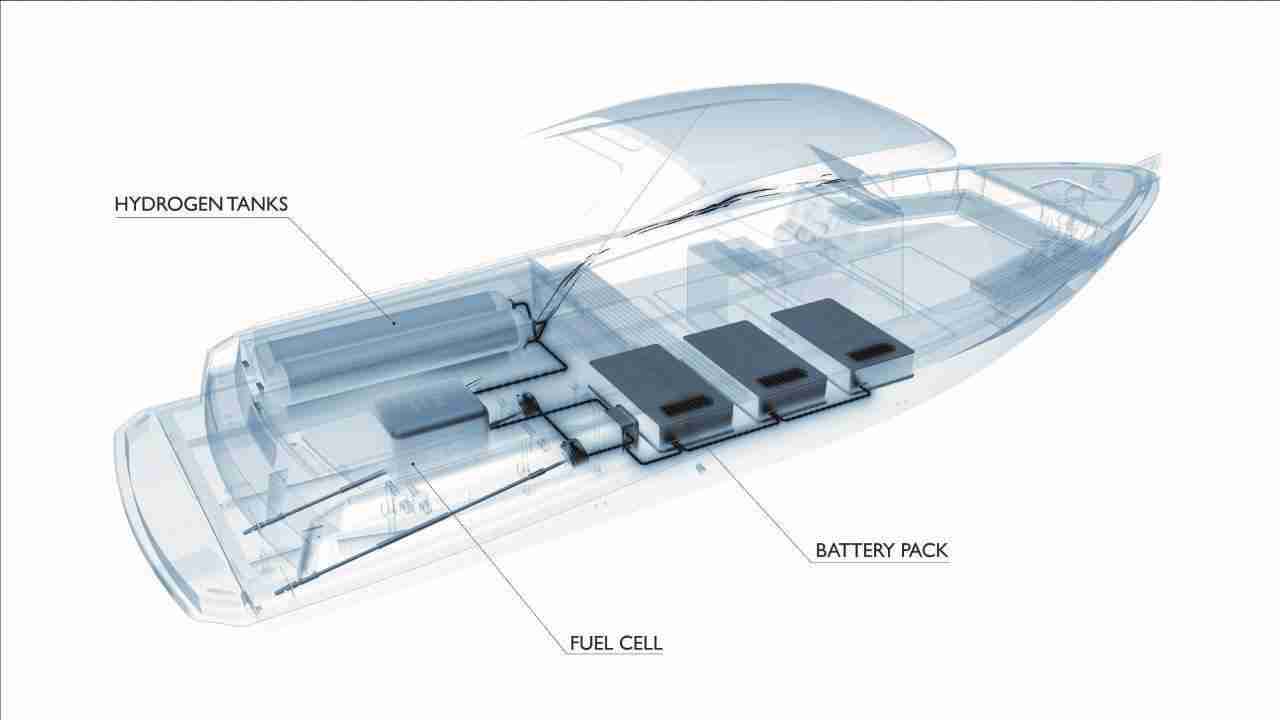 The boat weighs nine tonnes and has a maximum speed of 22 knots, with a cruise speed of 12 knots. Range is a limitation: the boat covers nearly 70nm at 6 knots, when cell and batteries are combined. At 22 knots, the boat can cover 10nm before depleting the batteries. That will leave over 90 per cent of the hydrogen left in the tanks, allowing the yacht to carry on another 40nm at 8 knots, or the boat can recharge the batteries using the fuel cell for an hour. This is not much, but as Zaied is quick to point out, the Hynova 40 that we tested at Cannes was a prototype. A better hull is being designed, and improvements in range are likely to come sooner rather than later. The other big challenge is the cost and distribution of hydrogen gas as fuel. To get the Hynova 40 to the Cannes show, Zaied says she and her team had to work out distribution of hydrogen fuel to the various ports on the way to the show. Each port required a new set of partnerships and solutions. “I came to all the captains [managers] of the ports to describe the solutions and challenge them to welcome the boat,” Zaied says. “We created precedents in nine ports in the C√¥te d’Azur. Now I’ve reached my limit, and I need a standard to perpetuate the business.” Zaied is just getting started. With her prototype having gathered so much attention, the time has come to put the hydrogen fuel cell concept into production. Zaied designed her own production yacht, the Hynova 42, which has sleek, elegant lines. During our trial run, she said that she was getting tired of the “big, boxy” look popular on yachts today.

“I was thinking to create a brand of boat, but it’s so much more: it is a new vision, a concept, in the middle of energy transition” – Chlo√© Zaied 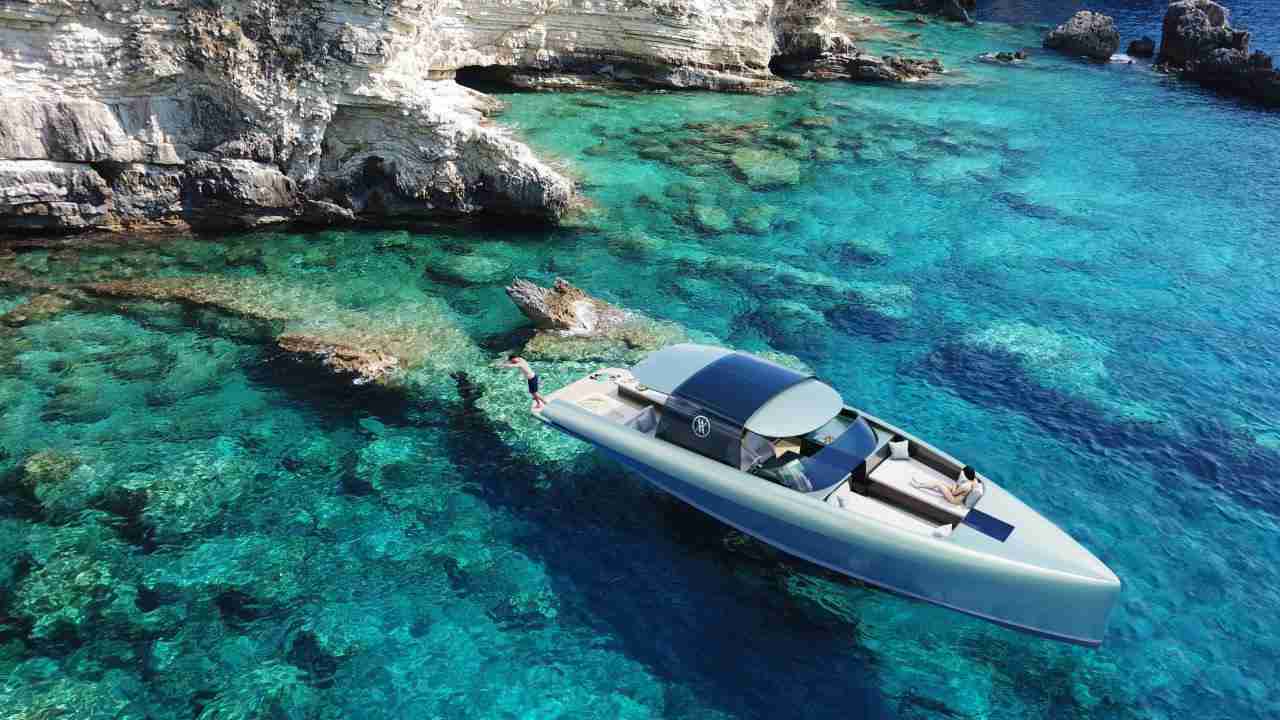 Hynova will produce its boats out of France’s La Ciotat Shipyards, located along France’s Mediterranean coast, near the Riviera. Zaied says that Hynova is due to begin production in late November and that a pre-order has already been signed for the first Hynova. The big new challenge now will be to ensure fuel infrastructure. Europe and East Asia are proceeding quickly to produce and distribute “green” hydrogen – hydrogen made using renewable energy. However, the cost of green hydrogen is still several times higher than ‚Äògrey hydrogen’, which is made using natural gas and emits a lot of carbon dioxide in production. “I’m still fighting to have the infrastructure for refuelling and regulation, but I’m really optimistic,” says Zaied. The announced capacity building in green hydrogen production – from a very small base – is due to rise quickly. Zaied says she finds all green hydrogen projects interesting, but the problem for her is timing. Her first boats will be ready to hit the water well before major hydrogen infrastructure is ready; she says she is now creating partnerships to find solutions for her customers as of next year. “I was thinking to create a brand of boat, but it’s so much more: it is a new vision, a concept, in the middle of energy transition. We are delivering a hopeful message for the best future.” www.hynova-yachts.fr