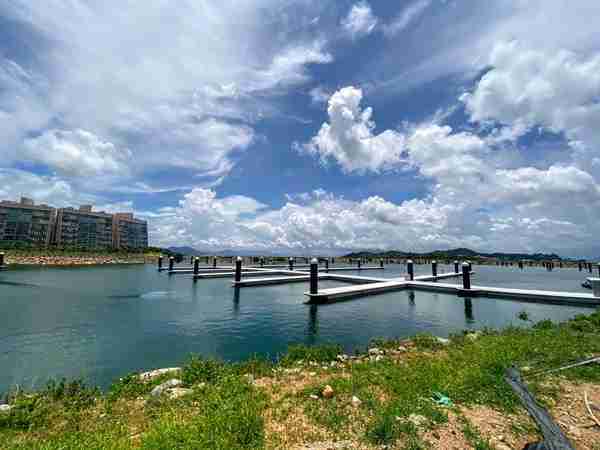 Lantau Yacht Club, the first new marina in Hong Kong in decades, is nearing completion ahead of a soft opening in September and a full opening later in November or December. Hong Kong has famously suffered from a shortage of berths, particularly for superyachts, for years.

About 80 to 90 berths out of the 148 planned berths are nearly ready, according to Marina Director Rudy Puystjens, who joined Lantau Yacht Club in March 2019. Puystjens, a veteran marina manager and former manager of the ONE°15 Marina Club, says that he wants to establish a highly professional standard for the marina’s operations from the outset.

Power and water pedestals are still to go in and about half of the pontoons have been laid down. All piling has been completed.

The marina basin has depths of between two and 6.5 metres, chart datum

Puystjens says that due to tough requirements from the Hong Kong Building Department, the pontoons had to be specially constructed in China, and the piling was done by a Hong Kong company.

There is also a 45-tonne travel hoist and washing bays for the smaller yachts that are expected to berth at the yacht club.

The marina basin has depths of between two and 6.5 metres, chart datum.

Prospective club members must pay an individual one-off, non-refundable entrance fee for a ten-year membership term for a yacht between 30 and 60 metres in length. There are also monthly subscription fees and wet berthing fees depending on the vessel length. Corporate memberships are also available.

Views over Discovery Bay towards Hong Kong Island and Kowloon

Puystjens added that prospective members would be invited and later vetted before approval.

Puystjens estimates that superyacht captains in particular will appreciate having access to the facilities at Discovery Bay.