The world's largest port festival (May 10-12) will include tall ship parades, tugboat ballet and the company of 300 vessels

The world’s biggest port festival, Hamburg Port Anniversary in Germany, is celebrating its 830th edition on May 10-12. Some 300 ships will call on the port, including magnificent tall ships and majestic cruisers, lovingly restored museum ships and maritime service vessels. The event will be held in the areas around Landungsbrücken, Speicherstadt (historic warehouse district), HafenCity, the Fish Market and Oevelgönne Museum Harbour.

The traditional starter for the Hamburg Port Anniversary is the International Ecumenical Service held at St. Michael’s church at noon. After that, Hamburg Senator and Minister of Economics, Transport and Innovation, Michael Westhagemann, will ring the ship’s bell on the museum ship Rickmer Rickmers to sound the official opening event. At 2 pm, the Grand Arrival Parade will kick off the three-day festival on and along the River Elbe. 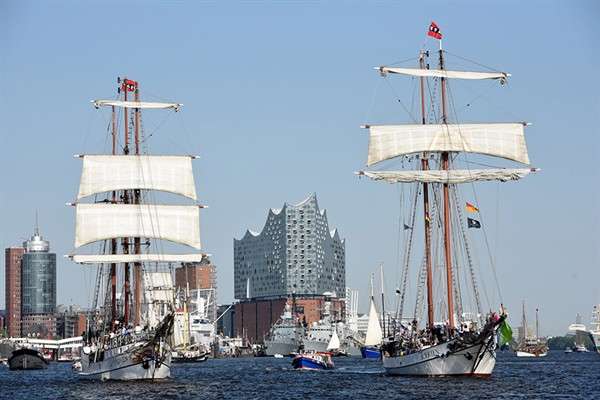 Highlights on Saturday, May 11 include the unique Tugboat Ballet and the Big AIDA Firework Display. The port tugboats will put on a show at 6:30pm in front of Landungsbrücken to the accompaniment of familiar tunes; and the Big AIDA Firework Display will transform the sky over the Port of Hamburg into a sparkling sea of colour, at 10:30. The ships will take their leave of Hamburg from 16:00 on the Sunday, with the Grand Departure Parade.

Between the Arrival and Departure Parades, visitors to the Hamburg Port Anniversary can expect a varied maritime programme and a journey through maritime history. A premiere at the world’s biggest port festival is Hamburg’s new firefighting vessel, Branddirektor Westphal, which has been in service in the Port of Hamburg since the beginning of the year. This 44 metre vessel is Europe’s most advanced firefighting vessel, capable of pumping 120,000 litres of water per minute and spraying the water to a height of 110 metres and a distance of 180 metres. That enables her to extinguish a fire even on the largest container and cruise ships in the world. Brand Director Westphal will also participate in the new programme item by the Hamburg fleet at 8:30 on Friday, May 10. The subsidiary run by the Hamburg Port Authority is providing a survey vessel with the most advanced measurement systems, a diving support vessel and a coastal patrol vessel operated by the Hamburg Waterways Police on the Lower Elbe and along the German North Sea coast.

A futuristic visitor from France will draw the crowds – the Energy Observer, a high-tech catamaran (30m LOA) and beam just under 13 metres, powered by renewable energies such as wind, solar and hydrogen. She is an ambassador for climate protection and sustainable technologies. She set off in June 2017 for a six-year odyssey around the world, calling in to ports in 50 countries. The Energy Observer is the first vessel to make her own hydrogen from seawater on a journey around the world, with zero greenhouse gas and particulate emissions. The project will be graced by French President Emmanuel Macron, and is also supported by the EU and UNESCO.

Following the great success of the premiere last year, the “Elbphilharmonie Concerts on Screen” will be back for the 830th Hamburg Port Anniversary, to the delight of classical music lovers. In cooperation with the Elbphilharmonie Hamburg and the NDR Elbphilharmonie Orchestra, live recordings of performances in the Main Hall will be projected onto a big screen on the forecourt of Hamburg’s iconic concert venue.

The country partner Occitanie/South of France presents the picturesque region of Occitania at Kehrwiederspitze. Occitania is located between the Pyrenees and the Mediterranean Sea, and is not only an attractive tourist destination, but also an important commercial region with the Airbus site in Toulouse. Occitania is also France’s biggest organic farming region, and invites visitors at the Hamburg Port Anniversary to come on a culinary trip to sample the aromas and flavours of the region. Visitors will have opportunities to taste Southern French specialities such as oysters, Armagnac and craft beer, olive oil and aligot.

A number of event spaces for special programme items and attractions appealing to families with children are located along the banks of the Elbe. Special exhibitions will be put on by museums in the Speicherstadt (the historic warehouse district designated as a UNESCO World Heritage site) and in the modern HafenCity district.