More yacht-friendly policies due out soon

Net tax rates on imported yachts to Hainan have dropped to zero as part of the island province’s new free trade zone (FTZ) policy, says Frank Lin, vice-chairman of the Hainan Yachting and Cruise Association and group leader for the boating section of the Hainan government. Lin, who started in the Hainan yachting industry in 2008 as general manager of Visun marina in Sanya, says the current tax rate on imported yachts in the rest of China remains 38 per cent. The FTZ plan, which was released on June 1 and includes specific mention of yachting, is a sweeping plan to transform Hainan into China’s biggest free trade port by 2035.

Lin says that the new tax policy is now in effect and he expects it to significantly boost yacht ownership in Hainan – most owners are based in northern China. He adds that the Communist Party Secretary for Hainan, Liu Cigui, and Hainan Governor Shen Xiaoming, are both keen to promote yachting in Hainan. Last year, the Hainan government established an independent office to coordinate yachting matters with other government agencies, a job previously handled by Hainan’s various port authorities. That new office is headed by the deputy governor.

“The market had been stagnating for the last three years,” says Godfrey Zwygart, another Hainan yacht industry veteran and marina manager. “The implementation of the FTZ will definitely bring a lot of changes and help develop the industry as a whole.” He notes that a tax rate for yacht businesses capped at 15 per cent will be another significant boon. 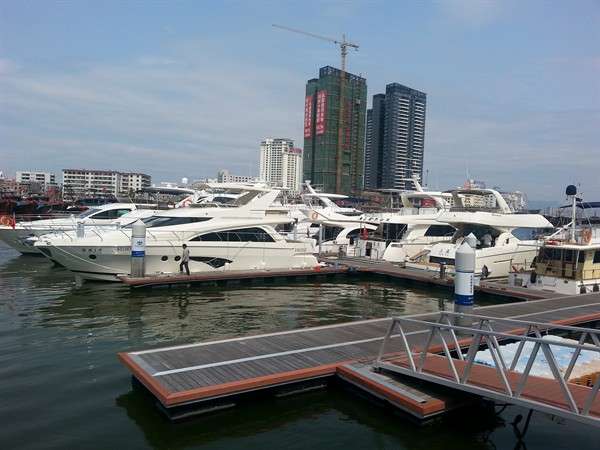 Sanya, Hainan’s southernmost city, became the focus of the global yachting industry in 2010 with the launch of the Hainan Rendezvous, which attracted the world’s biggest yachting brands. Major marina projects opened up, including the Serenity Marina, which hosted the Volvo Ocean Race.

Lin says the infrastructure to handle and service an influx of new yachts is still missing. Lin reckons that as boat brands sell more yachts, they will be enticed to set up servicing facilities as well. The Hainan government plans to encourage foreign enterprises to set up servicing, chartering and even boat building in future.

Lin says more specific policies to encourage yacht ownership and yacht visits are due out soon. Among them will be the relaxation of rules requiring visiting yachts of more than 24 metres to hand over sensitive design documents to the China Classification Society for certification. Zwygart says that it was this rule that held up visits, as shipyards refused to supply the documents. Rules established last year meant to encourage more yacht visits to Hainan had little impact on visitation numbers.

Lin says that from 2012, it became a common view among government officials that yachting was linked to corruption. Now, the view in Hainan and the central government is that yachting is a lifestyle, much like car ownership. The new policy for Hainan’s free trade zone status was announced by the State Council, China’s highest administrative body, underscoring the importance of the policy.