When it comes to Japan, the first points of reference are usually urban: think clattering pachinko halls, crammed commuter trains and Roppongi-style night life. That 73% of Japan is forested, mountainous and unfit for agriculture or human habitation is less well known, but that it should have its own inland sea is nothing short of miraculous.

The Seto Inland Sea – an area covering 25,000 square km between the main islands of Honshu, Shikoku and Kyushu – is without doubt Japan’s best-kept secret. Known as the Mediterranean of Japan, its temperate climate, low hills, tranquil coves and 700 islands make it perfect for cruising. That it isn’t even more popular is mystery enough. 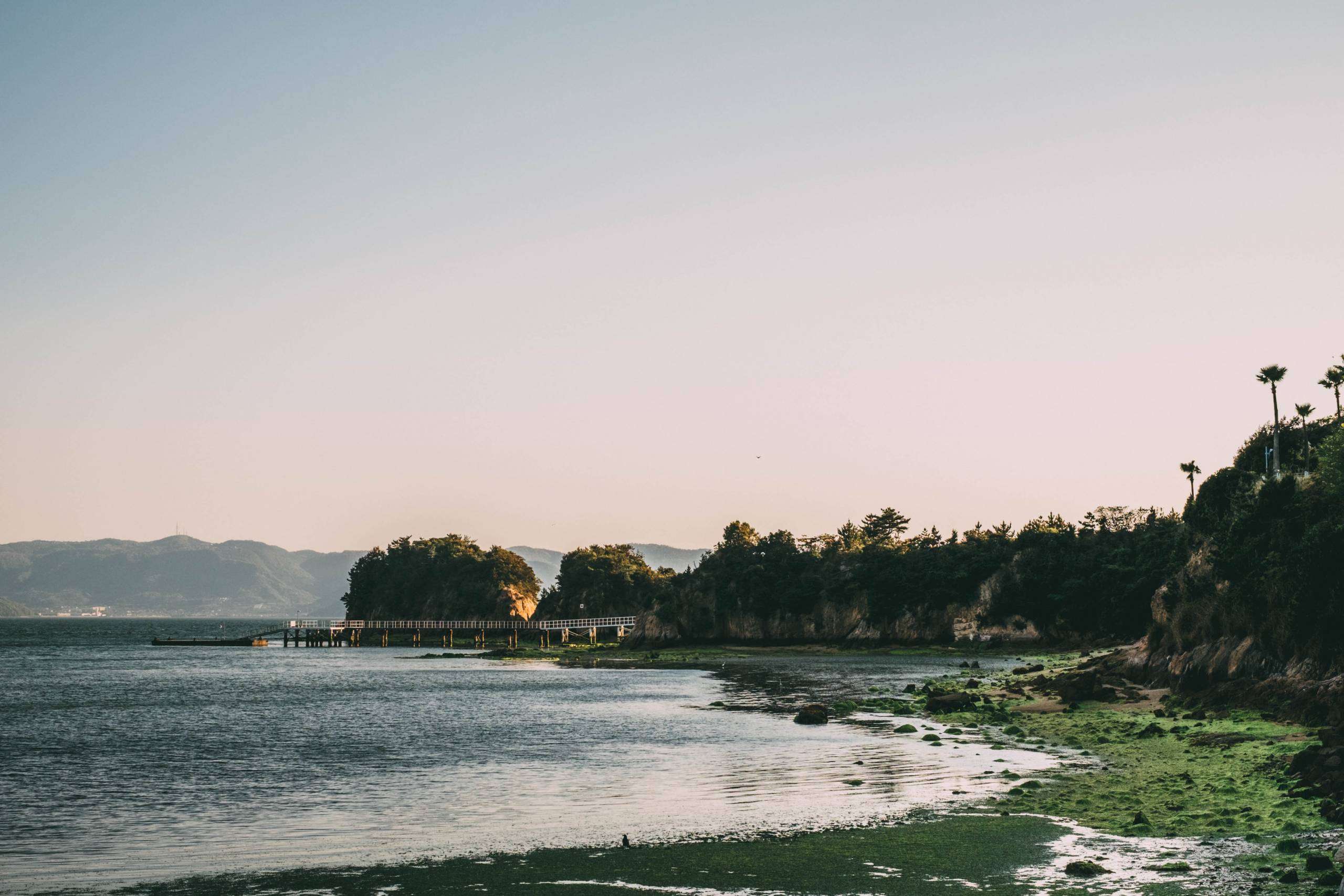 Known as the Mediterranean of Japan, its temperate climate, low hills, tranquil coves and 700 islands make it perfect for cruising. That it isn’t even more popular is mystery enough

However, one enterprising company Setouchi Cruise Inc saw the potential of this landlocked, lakelike body of water (known as Setouchi in Japanese) and in late 2017 launched guntû – one part Japanese ryokan, or inn, and one part houseboat/hotel. 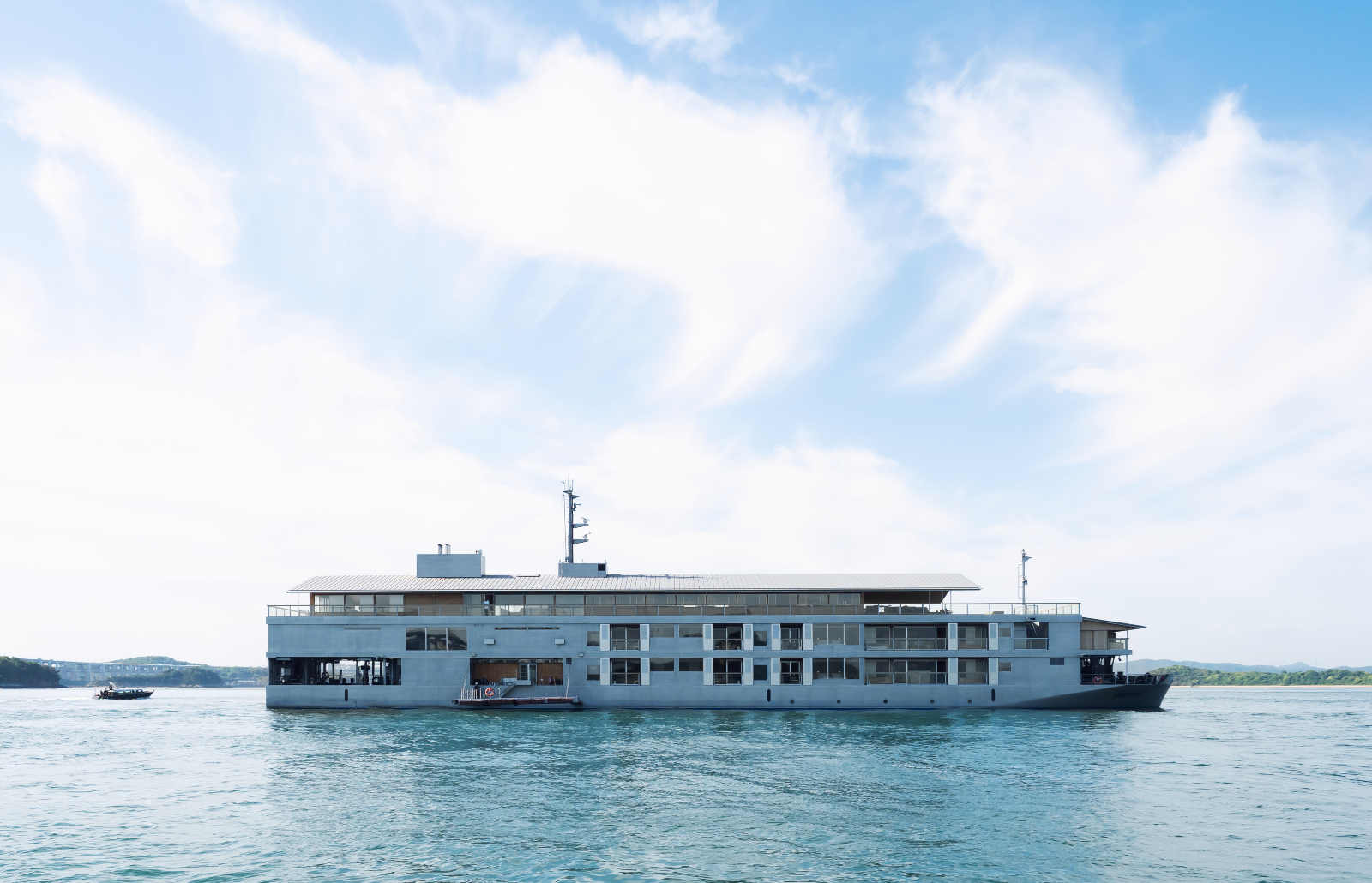 “The ship’s name guntû is borrowed from the nickname of a blue crab native to Setouchi,” the company says. “In that spirit, the ship features the rich delicacies of Setouchi and passes down its traditions and culture. “It is our hope that it will be loved forever by passengers as well as locals. The circumflex above the ‘u’ (û) evokes the ship’s hull and the symbolic form of the gabled roof.” 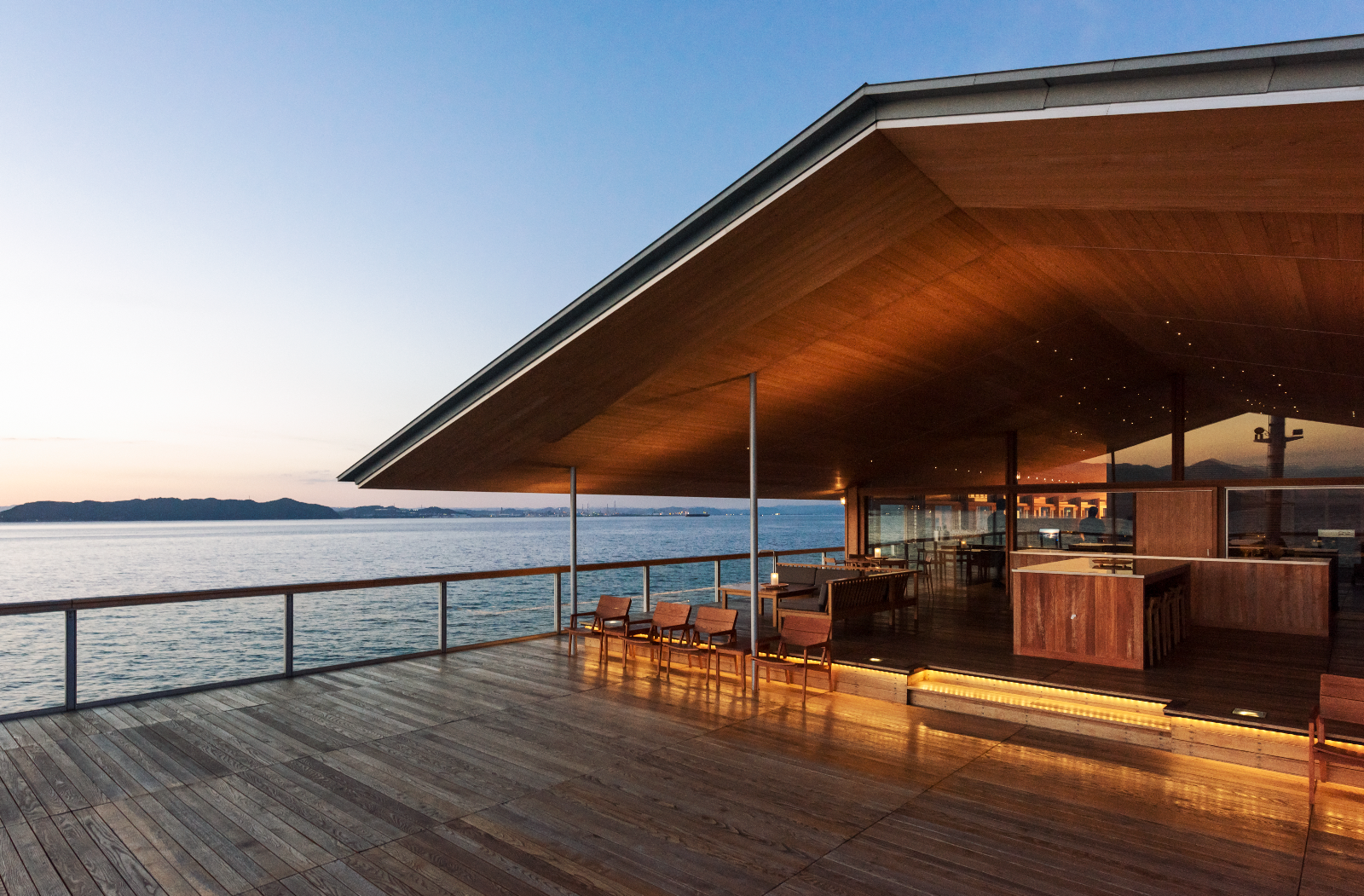 Designed by one of Japan’s most renowned architects Yasushi Horibe – famous for simple yet sophisticated architectural works – guntû is a Japanese welcome in wood, reflecting the ethos of the ryokan: a place where entertainment, relaxation and comfort come together in one place. 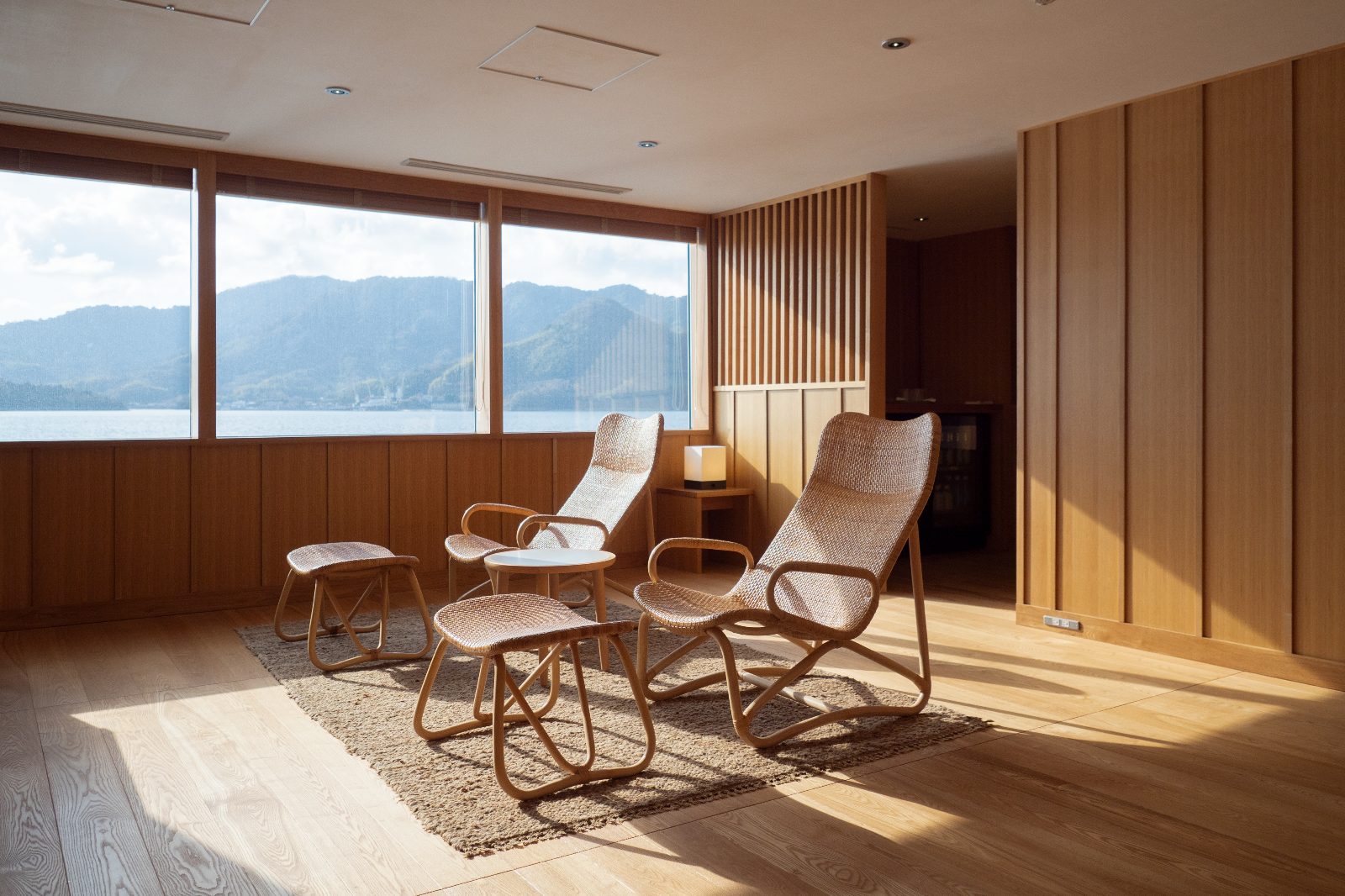 Minimalist to the last detail, simple yet elegant, the idea with guntû is to take up a position in either your cabin, on one of the terraces attached to the berths or even from your own bathroom and watch Setouchi simply glide past you.

For those lucky enough to book the premier guntû suite, the only suite in the bow with a forward-facing window, the view unfurls as if on a screen as the floating hotel (powered by electric engines) quietly slips through the vanishing heart of ancient Japan. 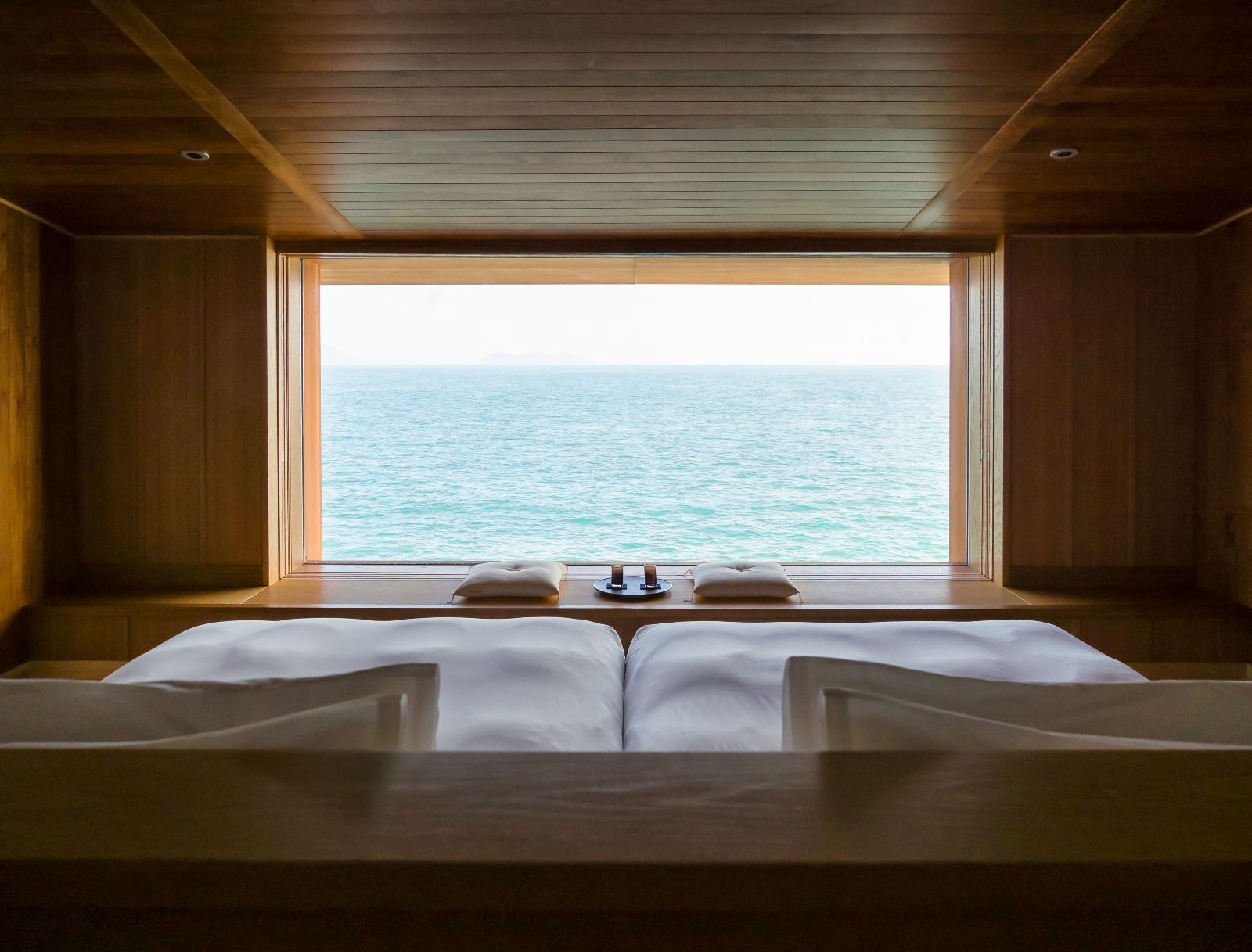 In many respects, guntû is the destination and the company stresses that it doesn’t focus on sightseeing tours or any organized activities. It does, however, take you ashore and allow the incredible landscape of Setouchi to do the talking for it. 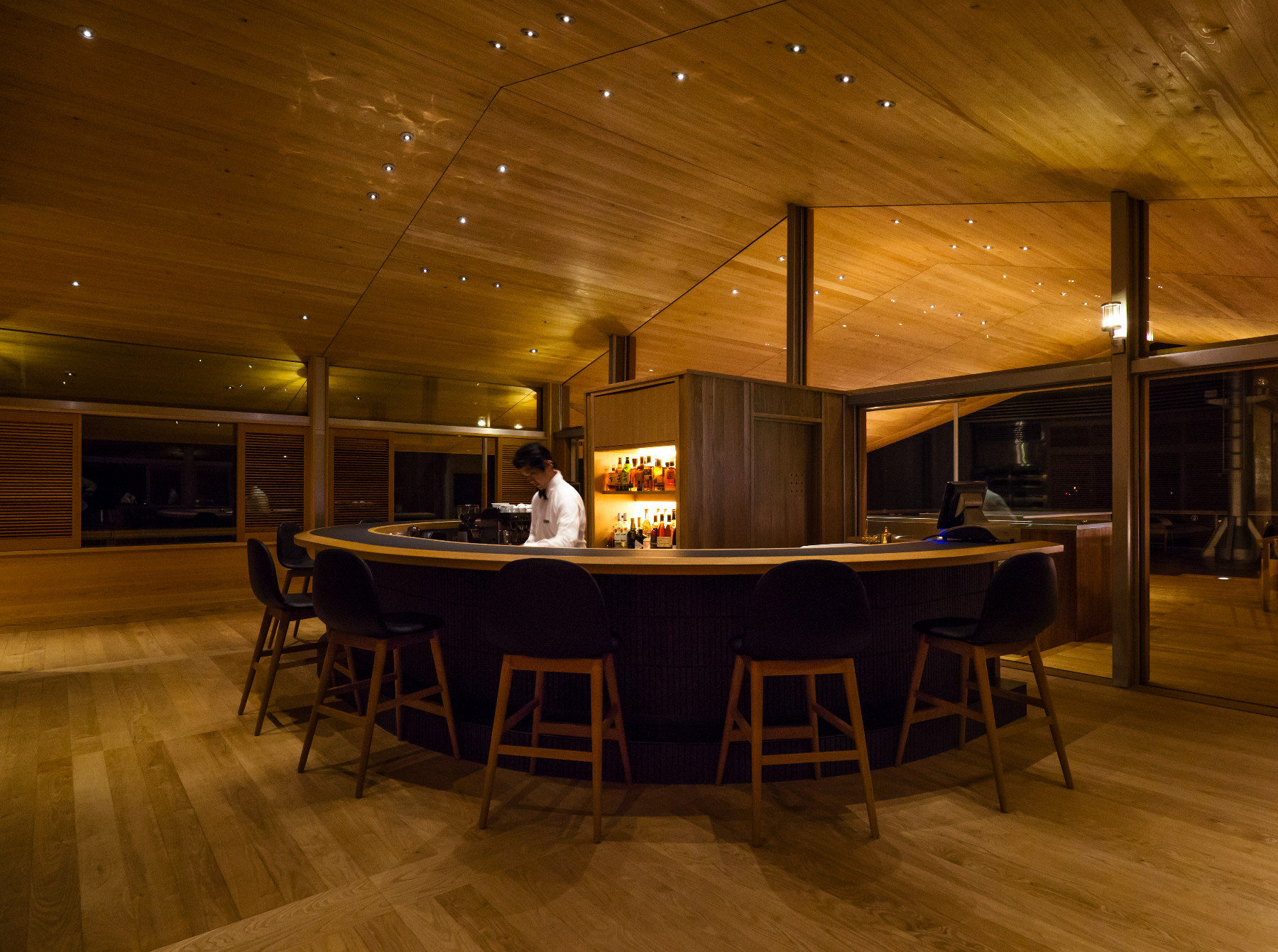 A typical westward route of two days and three nights sets off from Bella Vista Marina near Onomichi City, Hiroshima, at around 4.30 pm on the day of departure and stretches from the islands of the Shimanami Kaido and Tobishima Kaido westward to the Kutsuna Islands and Kaminoseki.

These routes – there are 10 in all – voyage through waters rich with history. These placid seas were once the home of Japanese pirate clans so powerful that the country’s shoguns simply had to find ways to accommodate them. 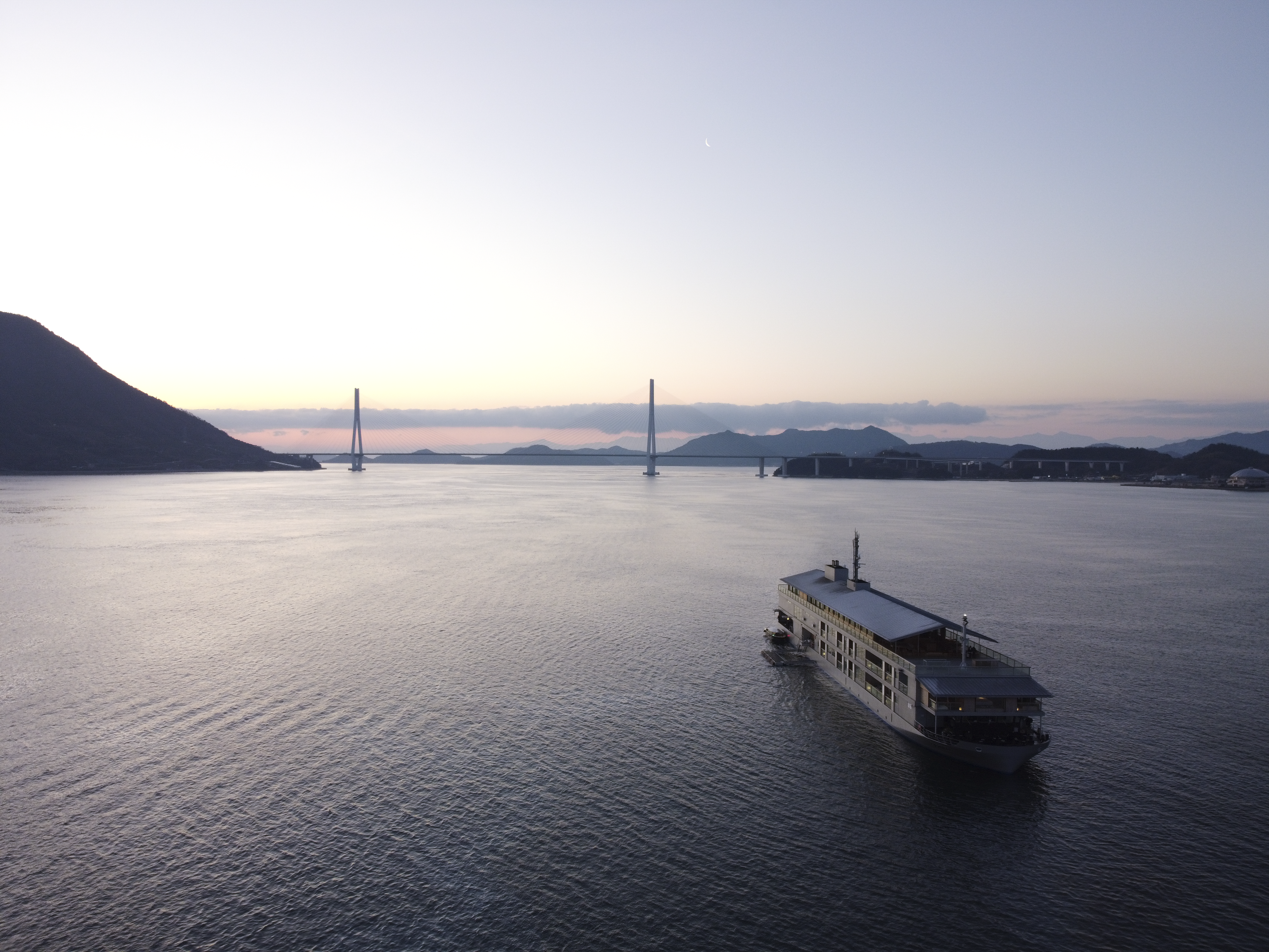 Guntû itself never docks during the trip, simply anchoring beside an island’s silhouette at night

This westward journey in the 19-room houseboat hotel also takes in Miyajima’s Itsukushima Shrine and Omishima’s Oyamazumi Shrine which are still the object of pilgrimages that, like the caminos in Spain, are growing rather than diminishing in popularity. The routes navigate between islands separated by the narrow “Seto” straits, letting you glimpse the scenery of everyday life in Setouchi up close. 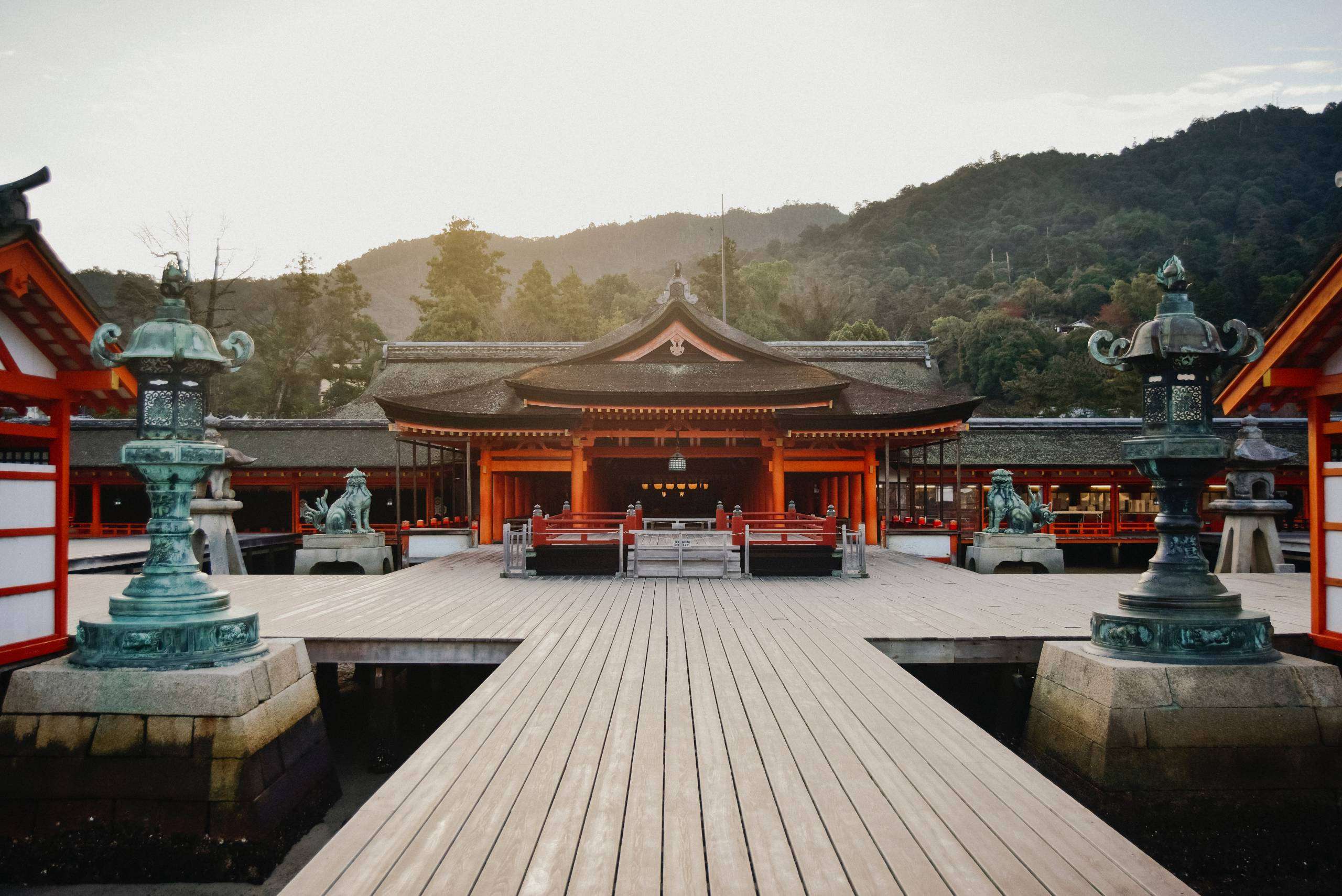 Guntû itself never docks during the trip, simply anchoring beside an island’s silhouette at night. In the morning, passengers can go ashore using its dedicated speed boats. This gives its guests the chance to visit places not normally available for sightseeing. Enjoy morning strolls along quiet lanes among the remains of old houses, experience fishing from small fishing boats, or observe seasonal events such as fireworks and festivals. A trip on guntû is to gain first-hand knowledge of local ways of life and culture.

The eastward routes, meanwhile, pass through the Kasaoka Islands and travel beneath the Great Seto Bridge to explore a region of islands rich with a distinctive industrial culture, from the art islands of Naoshima and Inujima to Shodoshima.

The waters of the eastern Inland Sea are more open than the west, and offer impressive views of dynamic structures like the Great Seto Bridge and wide vistas of islands and towns in the distance. Touring the art of Inujima is one of the highlights of this route. During the feudal period, it produced granite blocks for castle construction. In 1909, a copper refinery was built on the island but was shut down after only 10 years due to plummeting prices. 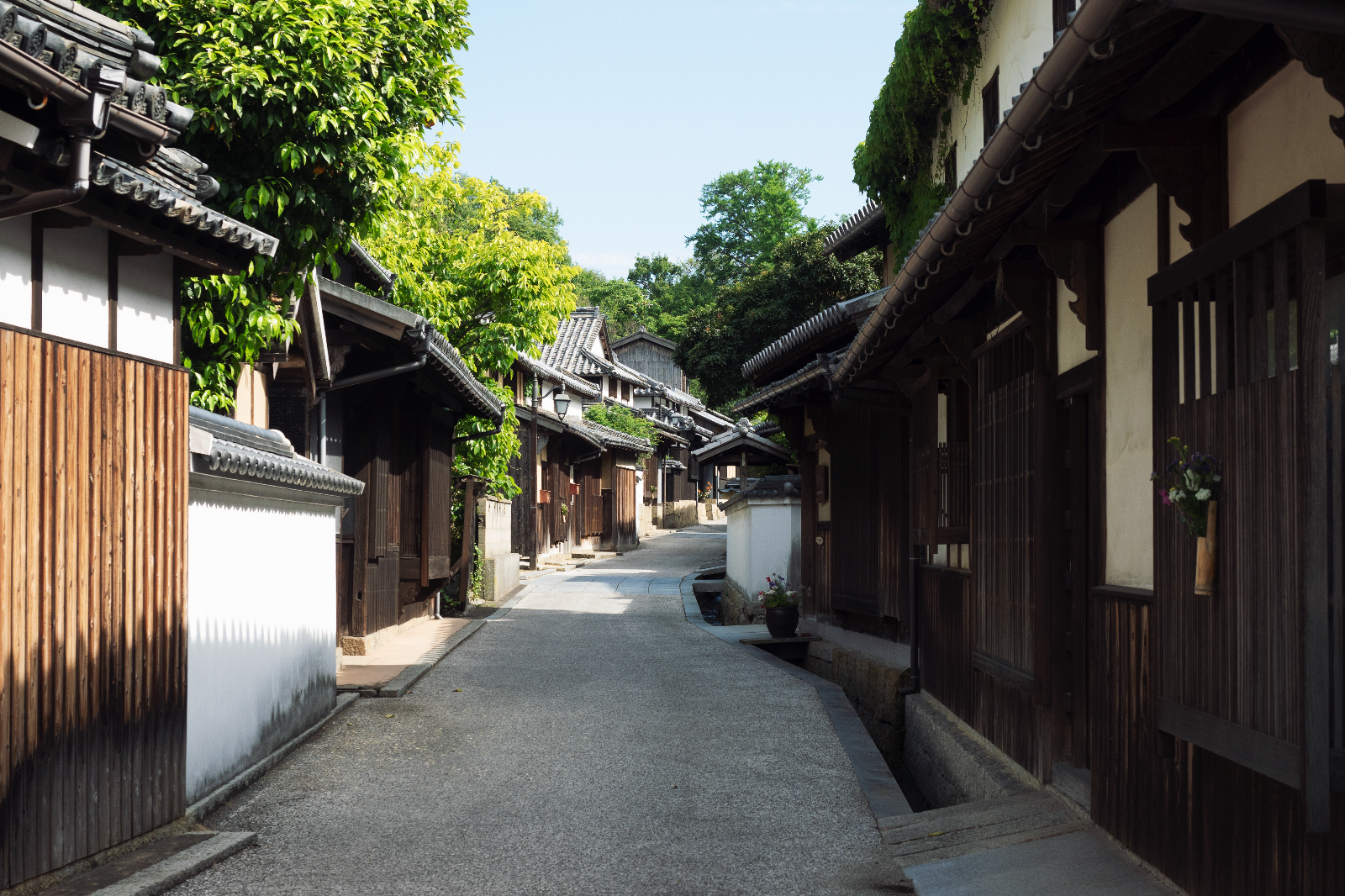 Once home to more than 3,000 people, today the island has fewer than 50 inhabitants and was, until 2008, something of a ghost settlement until the Inujima Seirensho Art Museum was set up amid the ruins of the refinery, making a feature of the crumbling bricks and smokestacks of its industrial architecture.

On guntû’s central route, the floating ryokan cruises through the waterways of the Shimanami Kaido, a chain of six islands linked by seven bridges, and the Tobishima Kaido, a series of five islands linked on the west end to Kure. The central routes have features of both the eastern and western routes, and combine “the delicate and bold, still and dynamic allure of Setouchi”.

Again, this region is famous for its granite production and stone from Kitagishima has been used in many places in Japan from the gates of Osaka Castle to the main office of the Bank of Japan. Here you can discover the deep history of Setouchi as you explore active quarries and abandoned pits that have now turned into lakes.

Ultimately, however, there’s no reason ever to leave guntû. Guided by the ethos of “enjoy what you want, as much as you want” the dining makes much of ingredients sourced from different areas around eastern and western Setouchi, depending on the weather and the mood of the day. Kenzo Sato from Shigeyoshi, a venerable restaurant in Tokyo, supervises the Japanese cuisine onboard. 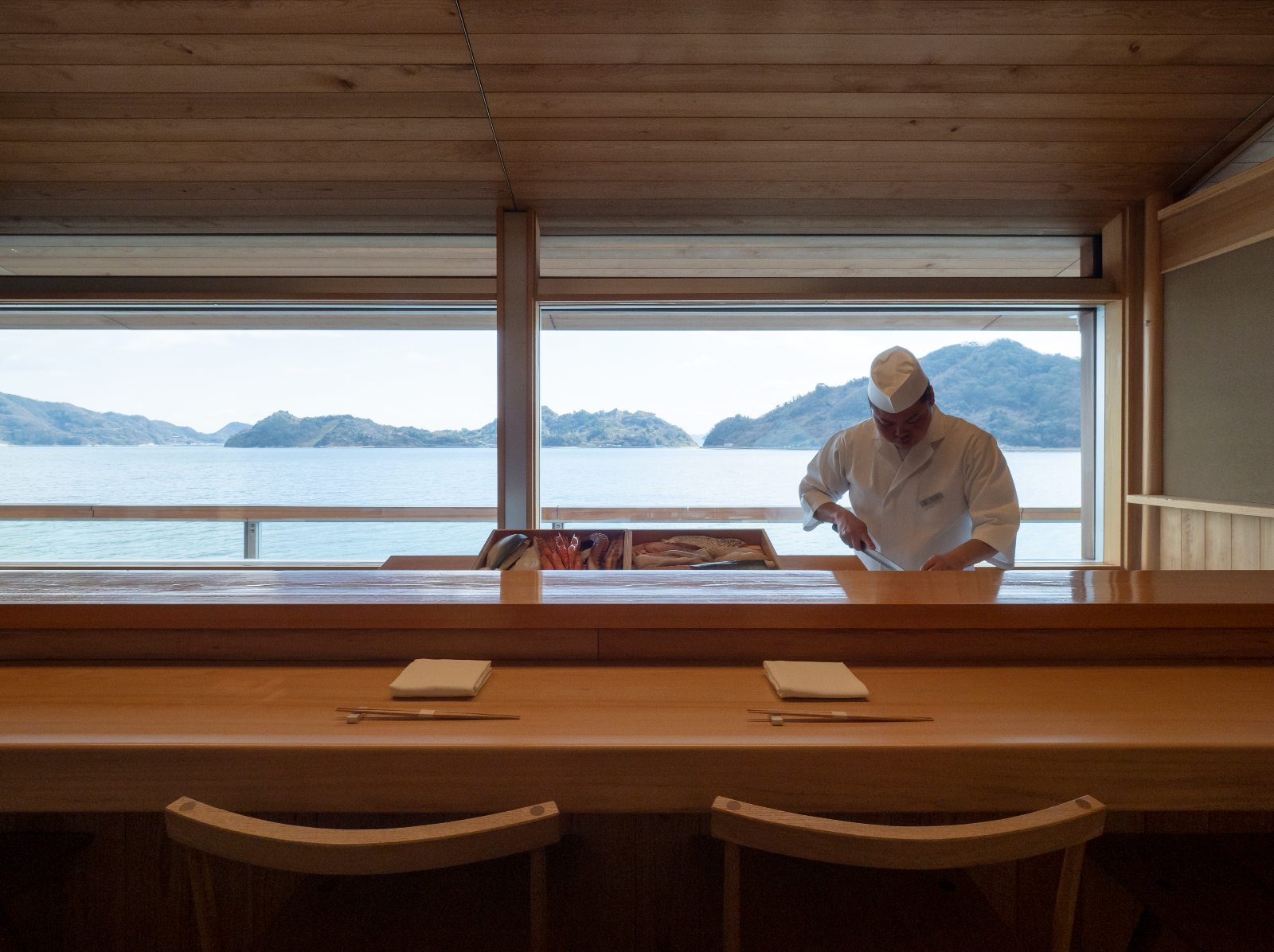 As with everything about Japanese cuisine, simplicity and refinement are at the foundation of its relationship with food. Japan’s famous onsen or bath culture is also front and centre on guntû and the spa area includes treatment rooms, communal baths, saunas and a gym.

“For relaxation, original treatment and massage menus have been prepared to meet the mood and physical condition of each and every individual,” the company says. “Choukoku-Lymph Treatments are a slow and deep method of care performed while warming your body on a bedrock mat. From a facial to the entire body, total care is available.” 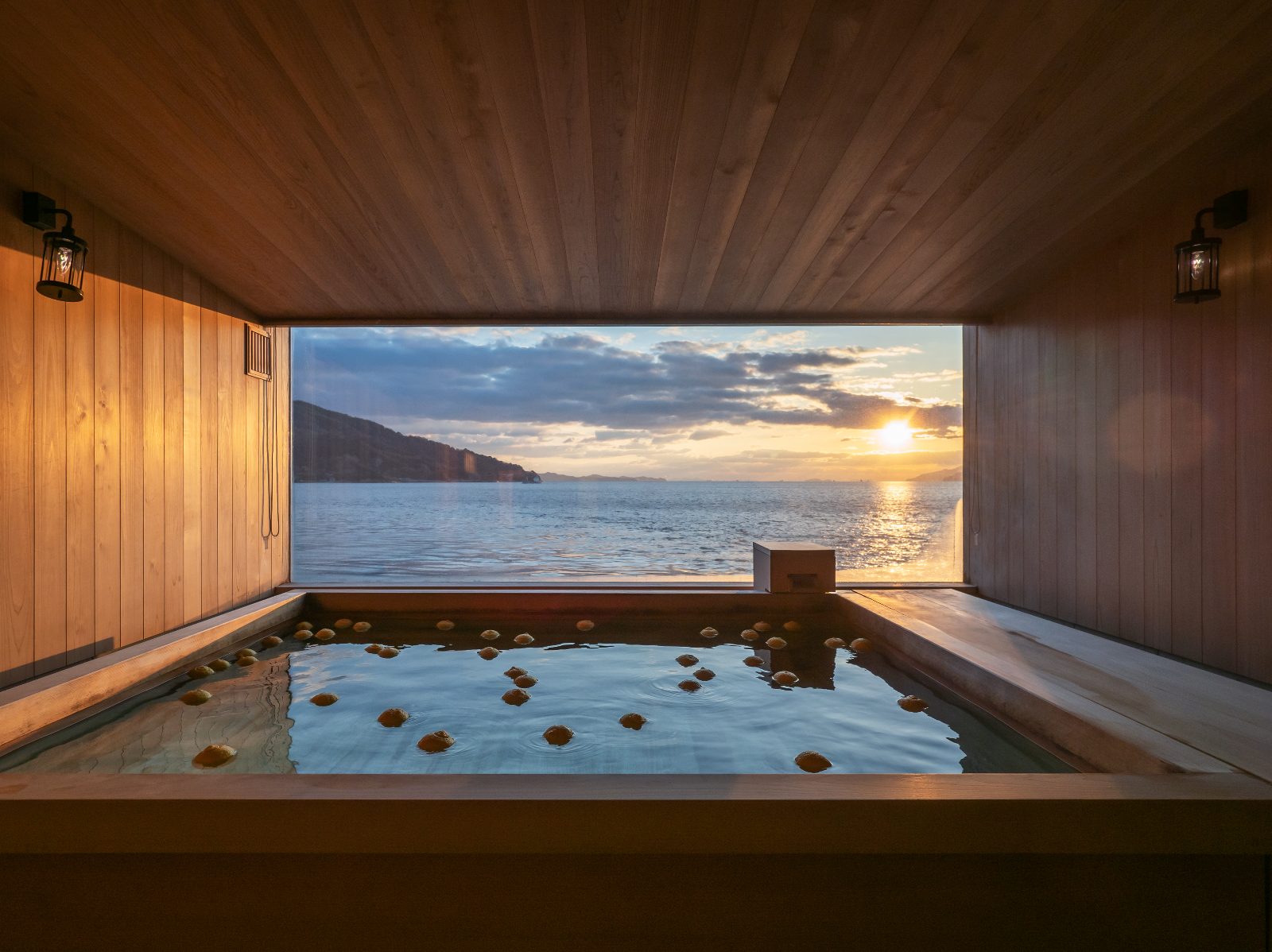 Perhaps the most quintessentially Japanese part of the journey is the architecture of the boat itself, in particular the “engawa” or Japanese verandah. This has been a staple of Japanese culture from its history of colourful woodblock prints to even Kurosawa films of the 20th century. Envisage, if you will, teeming warm summer rain outside but a dry and enclosed wooden space that cocoons you from the elements and allows you to take in the view at the same time. 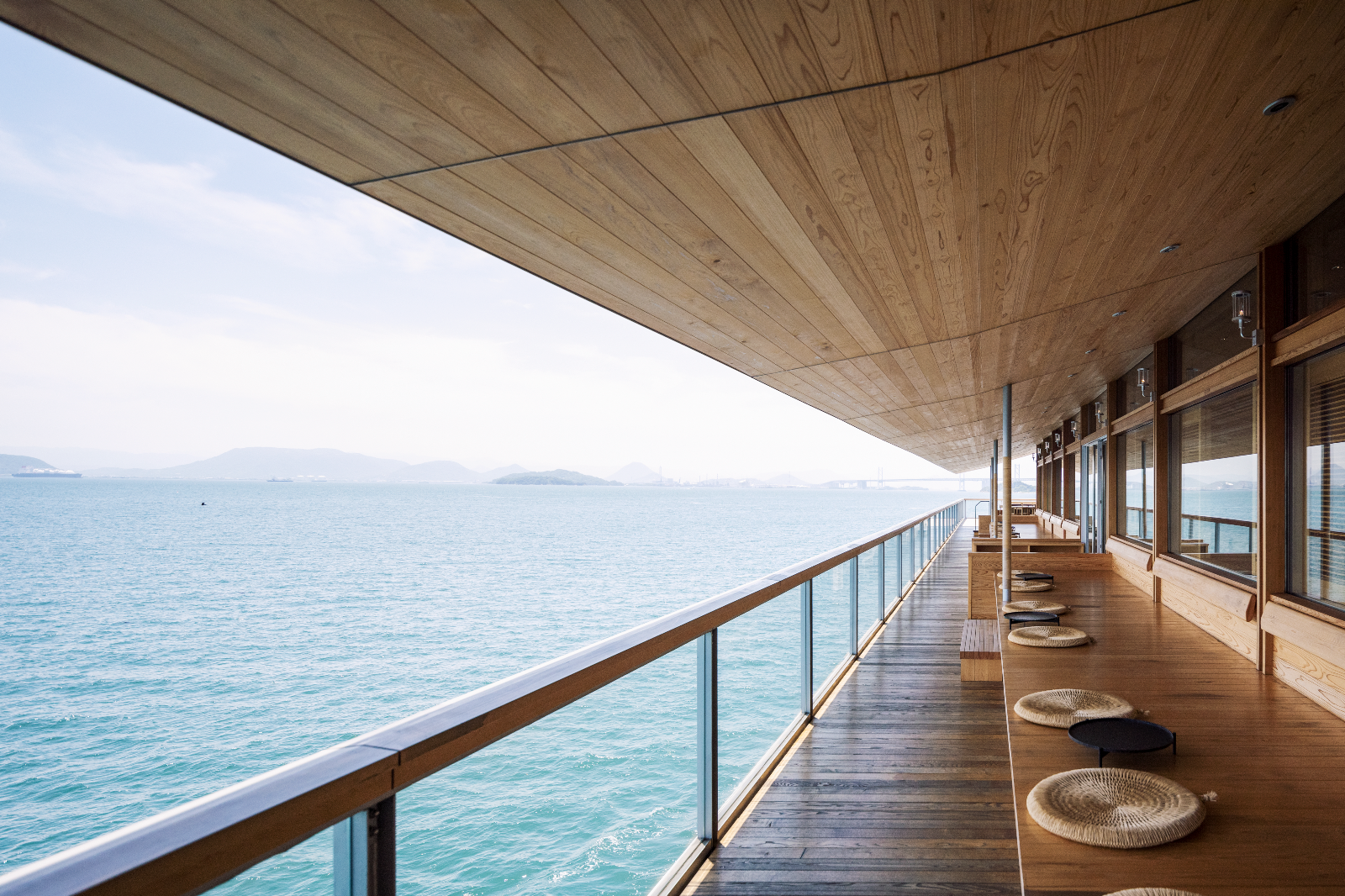 The engawa, or Japanese verandah

“Since ancient times, Japanese people have cherished moments on the engawa, lost in thought while sipping tea and gazing at rock gardens,” the company says. “Dressed in a yukata (an unlined summer kimono) with your favourite snacks and sake by your side, you can savour the slow flow of time in Japan.” The refreshing wooden interiors of guntû will certainly make sure that the rustic views of Setouchi stay with you long after you’ve stepped off the boat.

‚ÄúThese new rules mean that cruising Japan is now simpler than the USA or Europe‚Äù -...

Comment: Cruising Japan – how the paperwork logjam is finally lifting

Japan was once off-limits to the cruising community thanks to onerous bureaucracy, but now all that...