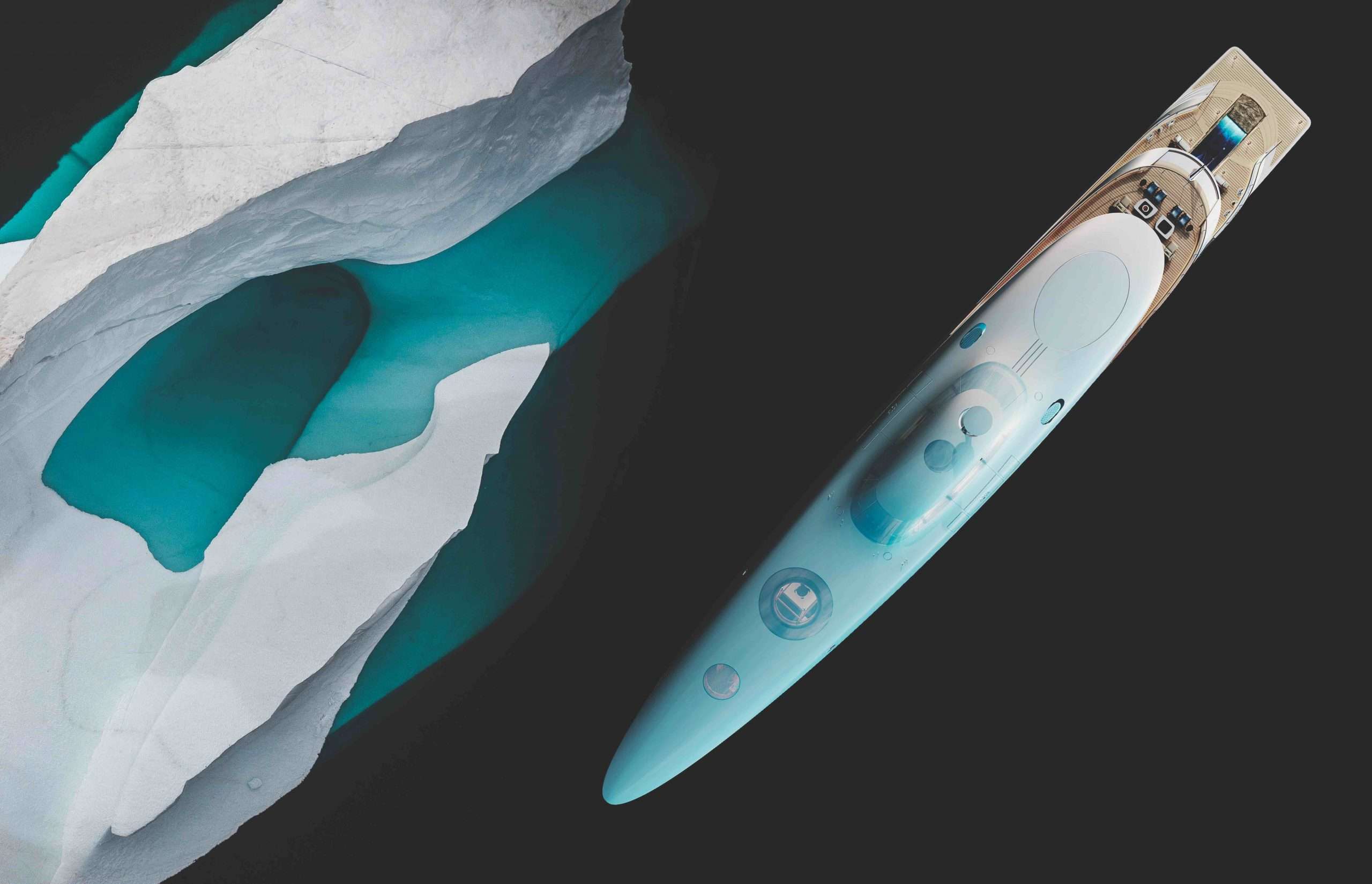 Could hydrogen fuel cells power the superyachts of the future?

Sinot Yacht Architecture & Design made headlines last year when they released a design for the €500 million superyacht, Aqua. The (false) rumour that Aqua had been purchased by Bill Gates captured the public’s attention; it was the Aqua’s proposed use of a hydrogen fuel cell electric powertrain that caught mine.

The Sinot design team appears to have accurately depicted the hydrogen fuel cell powertrain on the Aqua in a thoughtful way that reflects reality. The design theme of water is appropriate, for the only emission from hydrogen fuel cells is ultra-pure water. Passengers aboard Aqua would enjoy silent, vibration-free cruising with an uninterrupted – and unprecedented – connection to the sea.

I started working with hydrogen fuel cell technology over 20 years ago, and my first applied project was an examination of its feasibility in power boats. From 2014 until today, I have focused on the maritime application of hydrogen fuel cells, first with research at the US Department of Energy’s Sandia National Laboratories, where I established the nation’s only Zero Emission Maritime program, and now with Golden Gate Zero Emission Marine, a company I co-founded in 2017 to commercialize packaged hydrogen fuel cell marine powertrains.

A hydrogen fuel cell uses the chemical energy of hydrogen and an air intake to cleanly produce electricity. Water and heat are the only waste products. Fuel cells work like batteries, but they do not run down or need recharging. A hydrogen fuel cell yacht would simply fill up on liquid hydrogen at a specialized pump station. 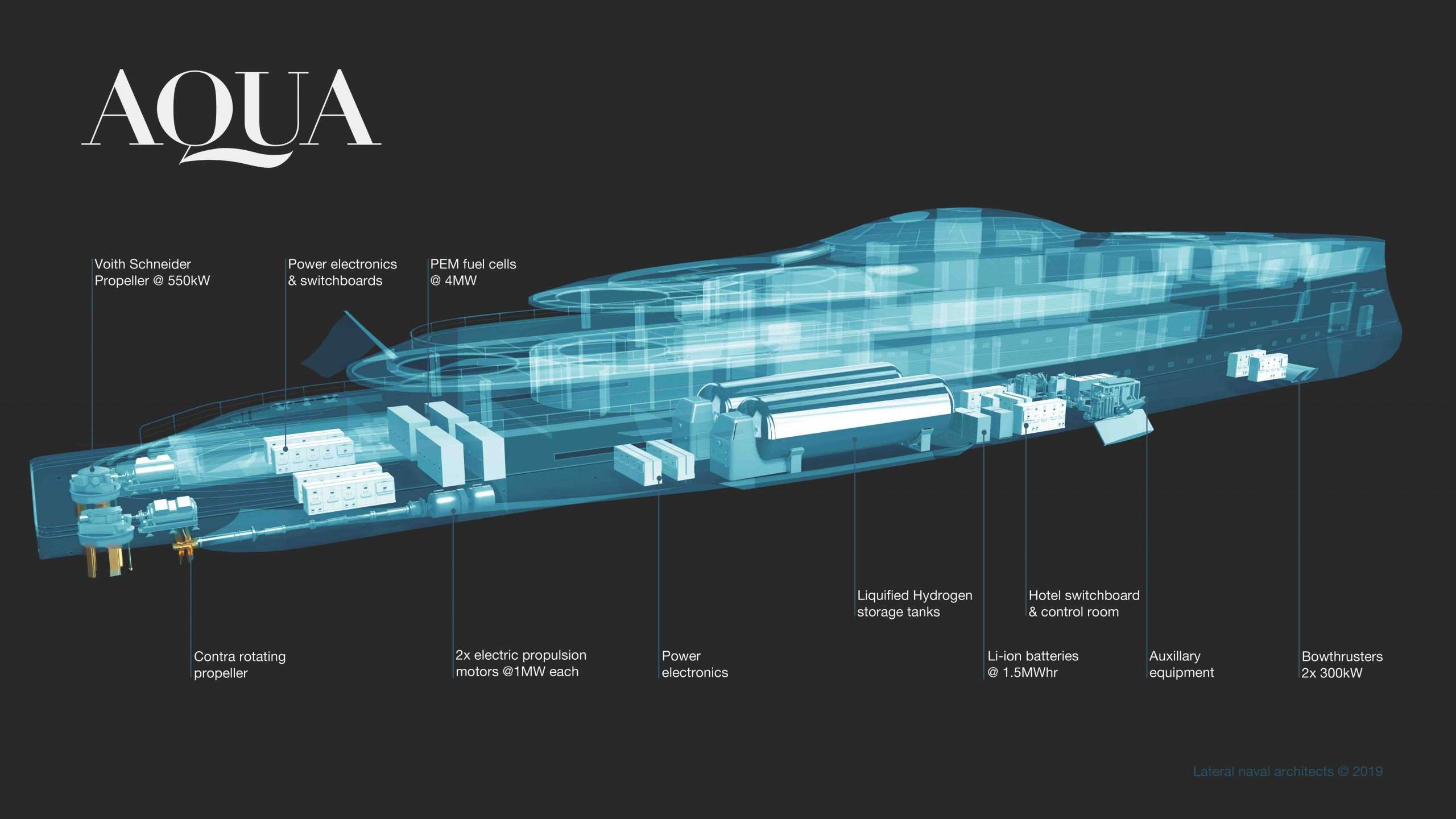 Water and heat are the only waste products

For the transportation industry to achieve zero carbon emissions, there are only two choices: batteries or hydrogen fuel cells. But because of the high duty cycles, power requirements, and – most importantly – high energy consumption, it is not really possible for batteries to power the vast majority of boats.

Batteries take a lot of weight and volume to store the enormous amount of energy required, using even the best projections for known battery technologies. Energy stored as liquid hydrogen (LH2) is over 100-times lighter and less than one-tenth the size as the most advanced Li-ion batteries today. This leaves hydrogen fuel cells as the only solution for boating.

However, even hydrogen fuel cells have a difficult time meeting the demands of some types of vessels.

Space is the key issue.

Made of a single proton and an electron, hydrogen is the lightest gas in the universe. If hydrogen leaks, it immediately goes straight up into the air at about 70 kilometres per hour – enough to clear an eight-storey building in five seconds; it is so light that it escapes the earth’s atmosphere and simply goes into outer space.

Liquifying hydrogen is the most practical method for powering large boats, but hydrogen must reach -253℃ to liquify – just 20 degrees above absolute zero. Such cold temperatures mean more energy is needed to make liquid hydrogen (LH2), and there are tough handling procedures.

In the automotive world, Toyota, Honda, and Hyundai have developed retail hydrogen fuel cell vehicles, in which compressed hydrogen is stored in thick, carbon fibre tanks at 70 MPa pressure. Even then, the volume of the tank is about eight times larger than a tank of diesel containing the same amount of energy. And pressurized gas tanks do not scale well – to contain hydrogen for a vessel, a pressurized tank array would have a volume 12-15 times that of the equivalent diesel tank. 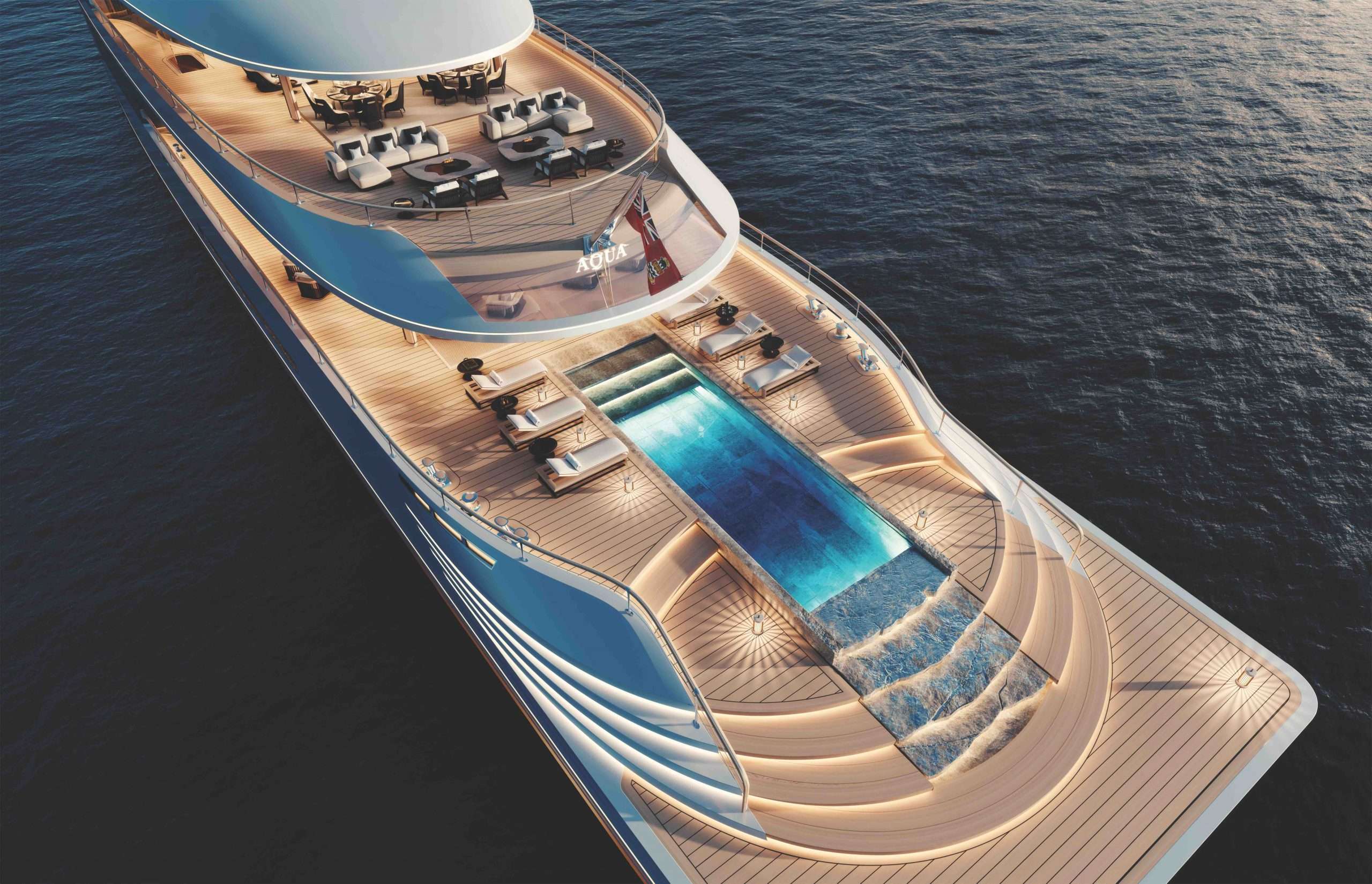 But even liquified, a tank of hydrogen is about four times the volume of diesel. Conversely, hydrogen is much lighter than diesel on an energy basis, which means that even though the tank will be larger, it won’t add as much weight to the vessel as the diesel tank.

Today’s commercially-available fuel cells, which convert hydrogen to electricity to power the on-board electric powertrain, are larger and heavier than their diesel engine counterparts. Throw in the electronics needed to manage the energy flows for the powertrain, and this part of the system adds even more volume.

The key point is that hydrogen fuel cell systems are larger than their diesel engine counterparts. This can be challenging for small boats and catamarans but is more easily accommodated on larger monohulls.

Large superyachts often call for moderate speeds and long ranges that are similar to commercial cargo vessels, but in a smaller package. The conventionally-powered 107-metre Andromeda is an interesting comparison.

The Andromeda has 4.4 MW installed power for a top speed of 16 knots and 8,500-nautical mile range.  Commercial cargo vessels with these power and range numbers would typically be 150 to 200 metres, and some of that added volume could be used to accommodate the larger hydrogen fuel cell powertrain. In a yacht, there is less space to work with.

The effect of this challenge can be seen in Aqua’s performance specifications: 4 MW installed power for a 17-knot top speed and a 3,750-nautical mile range.  In other words, Aqua has a similarly-sized powerplant to the Andromeda but less than half the range.

The volume issue has also impacted living area aboard Aqua. A look at the deck plans reveals fewer decks, guest cabins and tenders. Indeed, the entire lower deck of the Aqua appears dedicated to the propulsion and load system, while in conventional yachts, this is confined to just a portion of the lower deck. 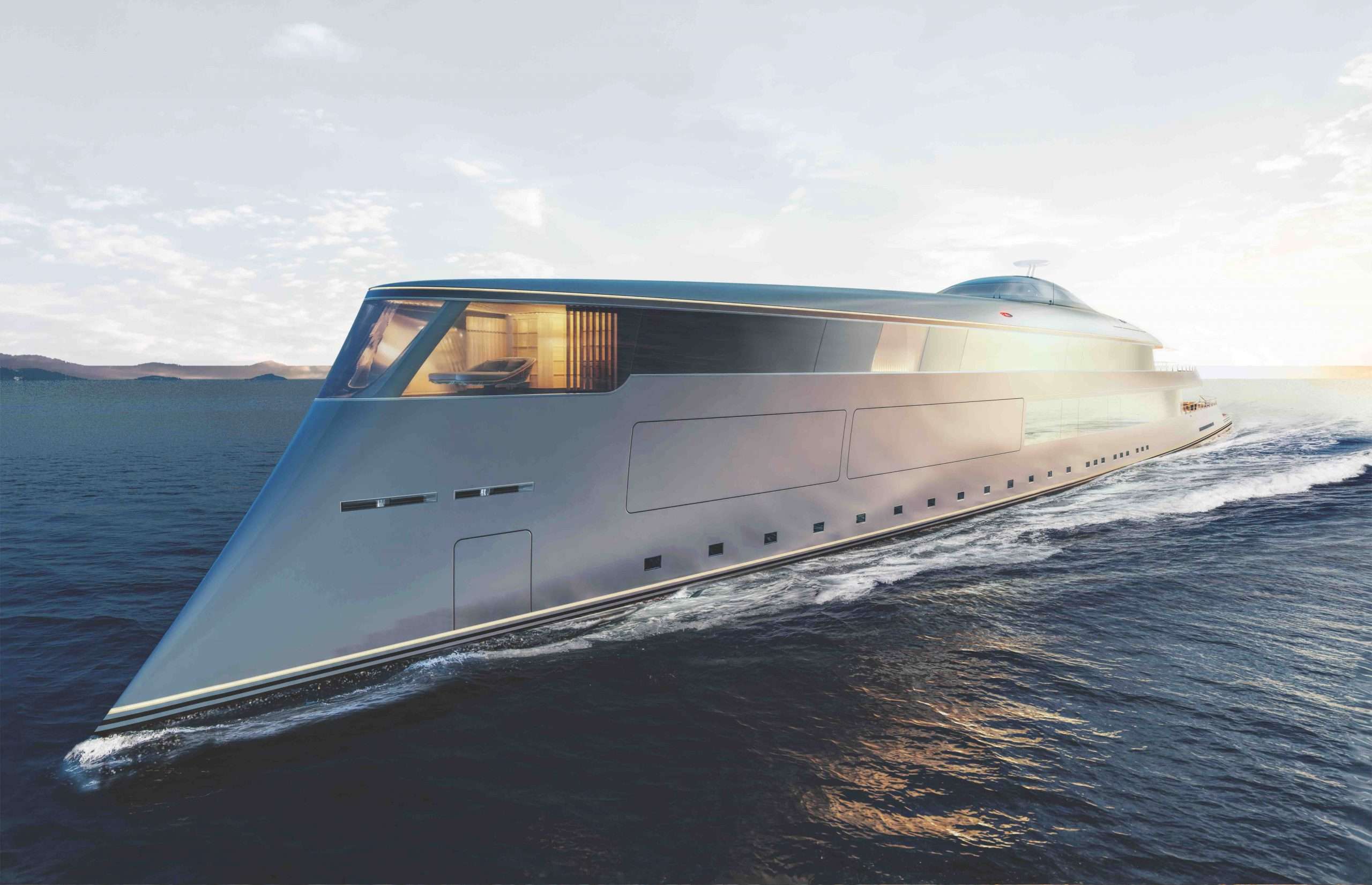 Aqua is an 80-metre yacht that has been masterfully ‘stretched’

Rather than compare the Aqua to other 110-metre class yachts, it’s better to think of Aqua as an 80-metre yacht that has been masterfully ‘stretched’ to accommodate the larger, hydrogen fuel-cell powerplant.

Aqua’s hydrogen fuel cell powertrain design is a great example of how this technology would be implemented on a yacht this size. The fuel cells are arranged in four 1 MW blocks, and from the publicly-released images, each block appears to be about 16.8 cubic metres. Aqua’s designers appear to have accurately estimated the volume required for today’s available technology.

Power electronics are an important part of the system because this equipment converts the fluctuating DC voltage output of the fuel cells into the regulated AC and DC power needed by the propulsion equipment and house loads. On Aqua, these are located in the stern near the fuel cells.

The designers assumed the power electronics to be about half the size of a fuel cell on a per-MW basis.

In both fuel cell and power electronics, the volume estimates seem conservative. By the time a vessel like Aqua is actually commissioned, it is likely that both technologies will be smaller than today, freeing up volume.

The cryogenic hydrogen fuel is stored in cylindrical tanks located amidships on Aqua. To keep the fuel as a cold liquid, an inner tank is surrounded by a vacuum space, superinsulation, and an outer tank. The inner tank is typically only 50-70% of the overall volume of the assembly. 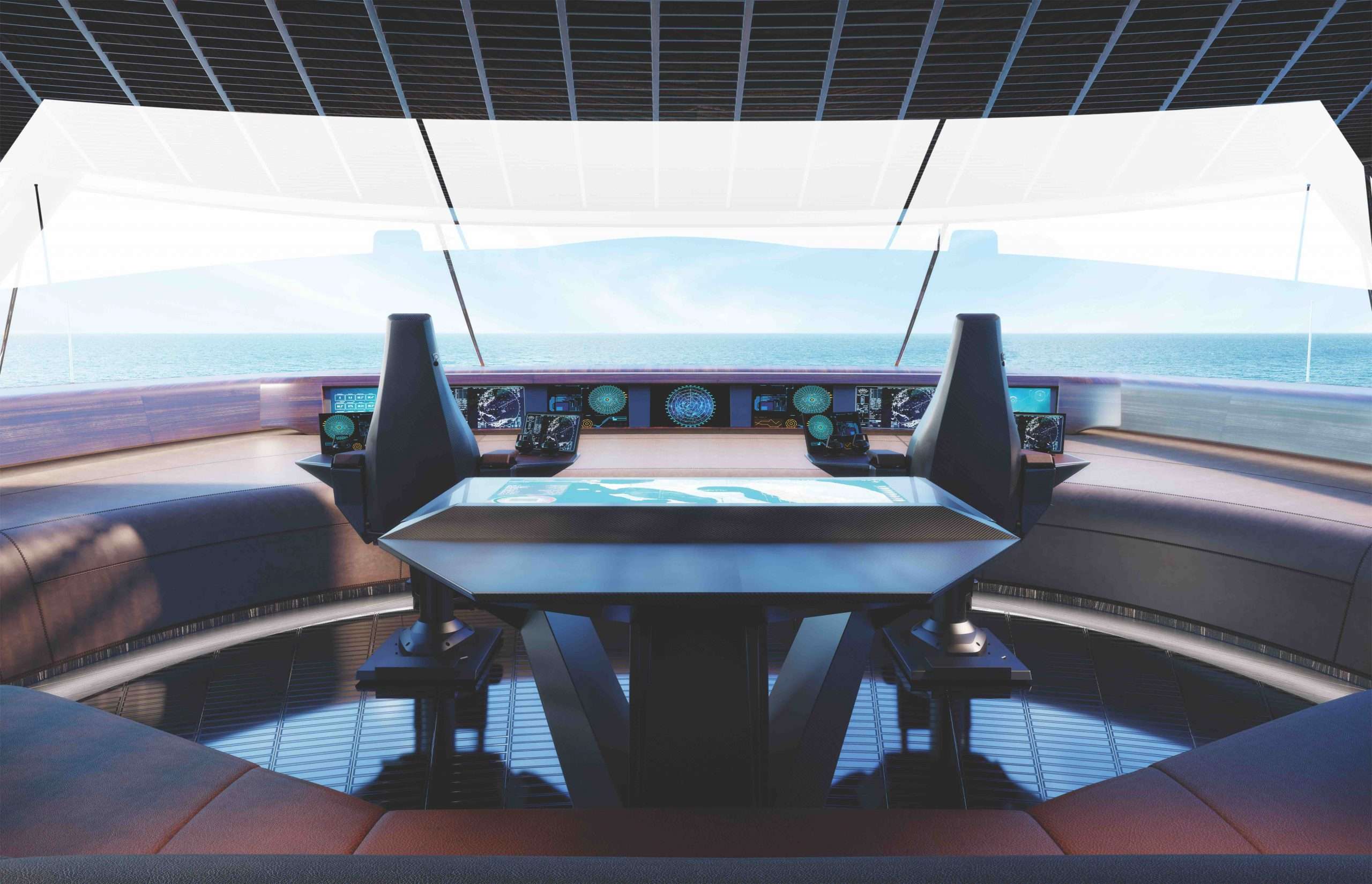 I estimate the outer volume of the tanks on the Aqua is about 350 cubic metres each, giving a rough hydrogen-carrying capacity of 14 tons per tank, or about 28 tons total. Using very rough approximations, at 12 knots, the Aqua might consume about 22 tons of fuel to reach maximum range.

Every major component on the Aqua’s powertrain consists of multiple redundant blocks. This not only allows flexibility in placement, it also provides inherent resiliency.  If there’s an issue with any part of the fuel cell or hydrogen supply system the vessel will continue to have power to propel itself and support the house loads. If a single fuel cell fails, the power output of the block is barely affected. The crew can isolate the failed unit and replace it with a backup from the ship stores in a matter of hours with no noticeable effect on operations.

Over time, fuel cells naturally degrade and need to be replaced. Yet, there would never be a need to take the vessel out of service for an extended overhaul. This is just one of the ways maintenance is drastically reduced with the use of a fuel cell-based, solid-state power system.

A curious aspect of the Aqua’s power system design is the inclusion of a 1.5 MWh Li-ion battery pack, normally used in tandem with diesel engines. As noted above, the multiple redundancy nature of a fuel cell powertrain precludes the need for a battery pack for backup power, although the battery could be thought of as a second redundancy measure. 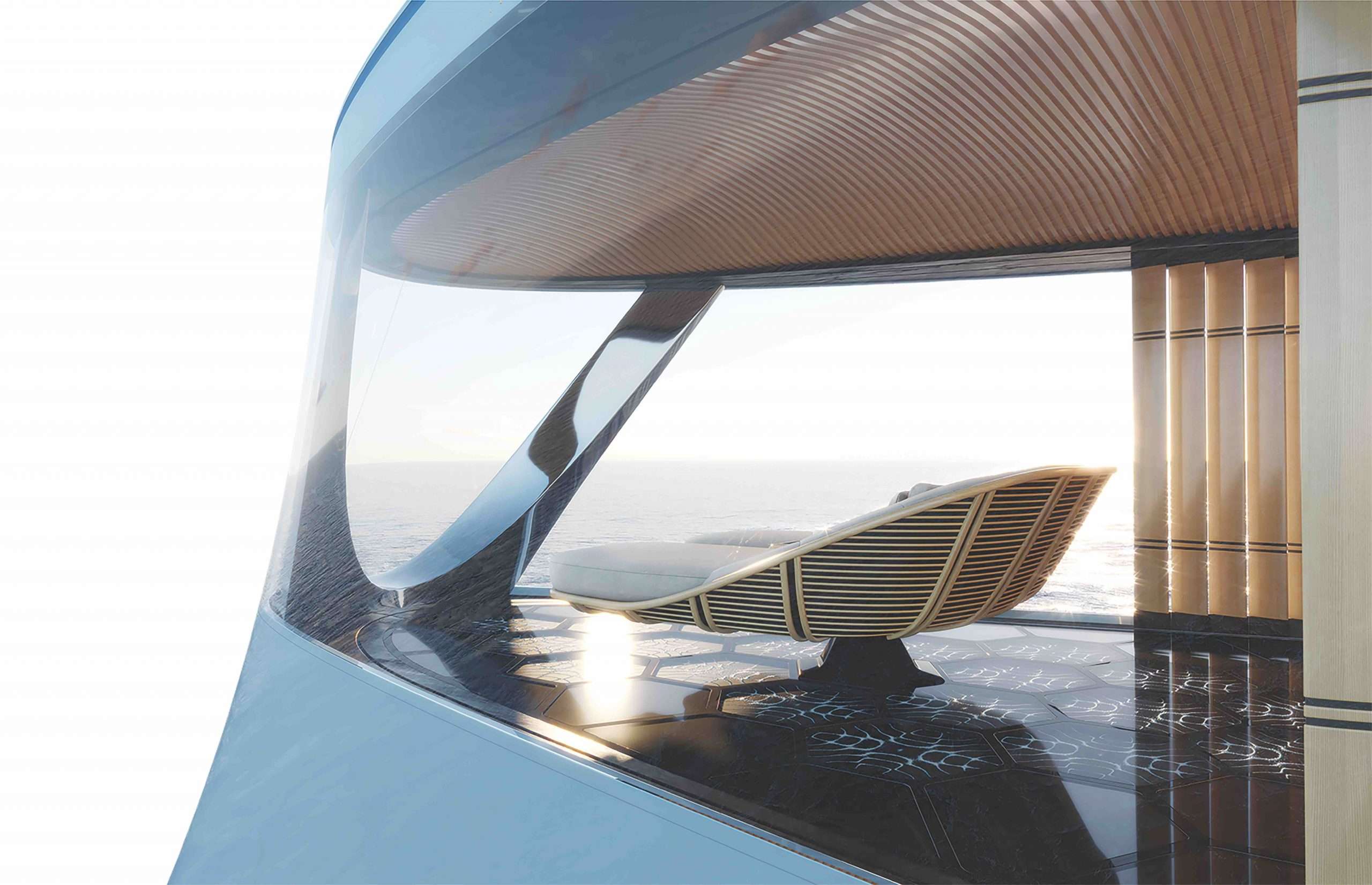 Taking a bow: the observatory on Aqua

The mechanics of fuelling Aqua would be based on well-established practices for handling and transferring liquid hydrogen on land, with modifications to meet maritime regulations. Because of the similarity between handling liquid natural gas and liquid hydrogen, only minor changes to regulations would be required.

The situation is changing rapidly, with multiple projects in the EU, Japan, and other places focused on increasing production and import/export terminals to support the coming global hydrogen economy. In June this year, Yanmar announced a partnership with Toyota to develop a hydrogen fuel cell system for its range of mid-sized yachts, using Toyota’s experience with fuel cell technology for cars and trucks.

The IMO’s 2050 goal of reducing greenhouse gas emissions by 50% means that the commercial shipping industry is looking seriously at clean technology to power large vessels. At the end of 2019, the International Chamber of Shipping, a collection of shipowners around the world, proposed a US$5 billion R&D fund to create an industry-wide solution to green shipping.

Shipping lines are experimenting with LNG powered ships, but though such vessels can reduce greenhouse gas emissions, they can’t meet carbon goals of the future. The long development and life cycle of large ships means decisions need to be made today regarding the fuel and technology that will be on the water in 2050 and later. Hydrogen fuel cells are being seriously considered as they are continually proven at larger and larger scales. You can expect the first short journey ships to adopt hydrogen fuel cells, followed by deep water vessels. 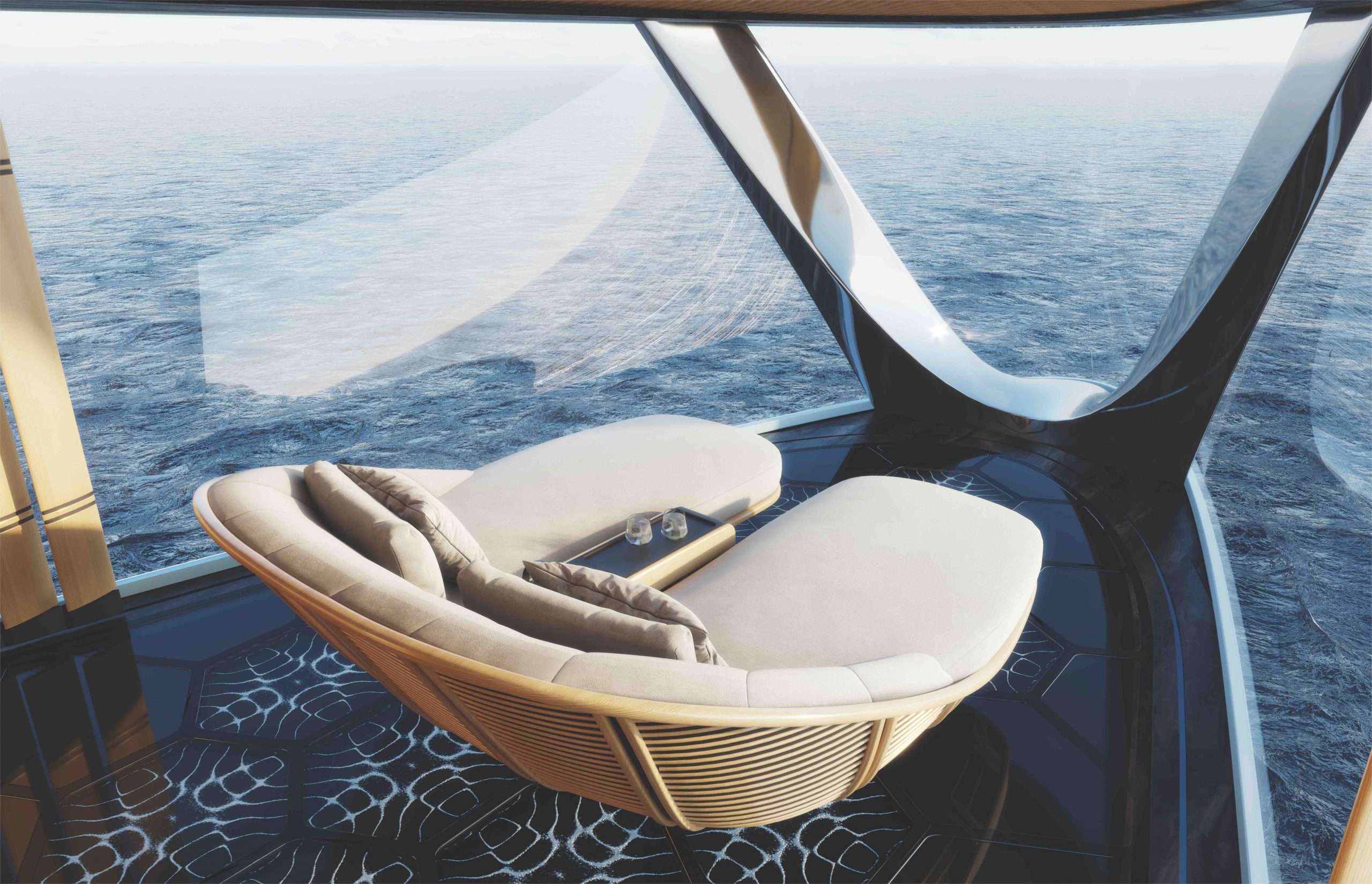 Large, hydrogen fuel consumers such as commercial ships is one factor that will drive the development of a worldwide hydrogen fuel infrastructure.

Commercial, hydrogen-powered vessels, typically ferries, are already in build around the world. Norled, the Norwegian ferry company, is building a prototype ferry due for launch in 2021. A hydrogen powered, 12-passenger ferry is already in operation in Nante, France, while a hydrogen-powered tugboat is in build in Germany.

In Japan, the world’s first liquefied hydrogen carrier, was launched by Kawasaki Heavy Industries (KHI) in December last year. The ship is part of the Shell-backed HySTRA project, meant to supply large amounts of hydrogen from Australia to Japan.

In March this year, SWITCH Maritime (SW/TCH) has awarded All American Marine, a US based shipbuilder, a contract by to complete the aluminium construction of a 70-foot, 84-passenger hydrogen fuel cell powered, electric drive ferry, the first of its kind in North America.

However, superyachts don’t need to wait for the commercial shipping sector to act. Local and regional marine initiatives around the globe are planning build up hydrogen production fuelling capacities to support, for example, ferry fleets and workboats.  As these marine “hydrogen hubs” get established around the globe, superyachts can leverage the growing network and sail between them.

Speaking also as a founding partner at H2 Advisors, a hydrogen energy strategy development group, it is clear that the commission of a vessel like Aqua would single-handedly encourage hydrogen fuel cell development for the benefit of the entire globe.

More than simply decreasing the pollution by a single vessel or increasing the cachet of an owner looking to showcase the latest trend, Aqua would impact an entire industry by increasing awareness, creating infrastructure and charting a path for others to follow.