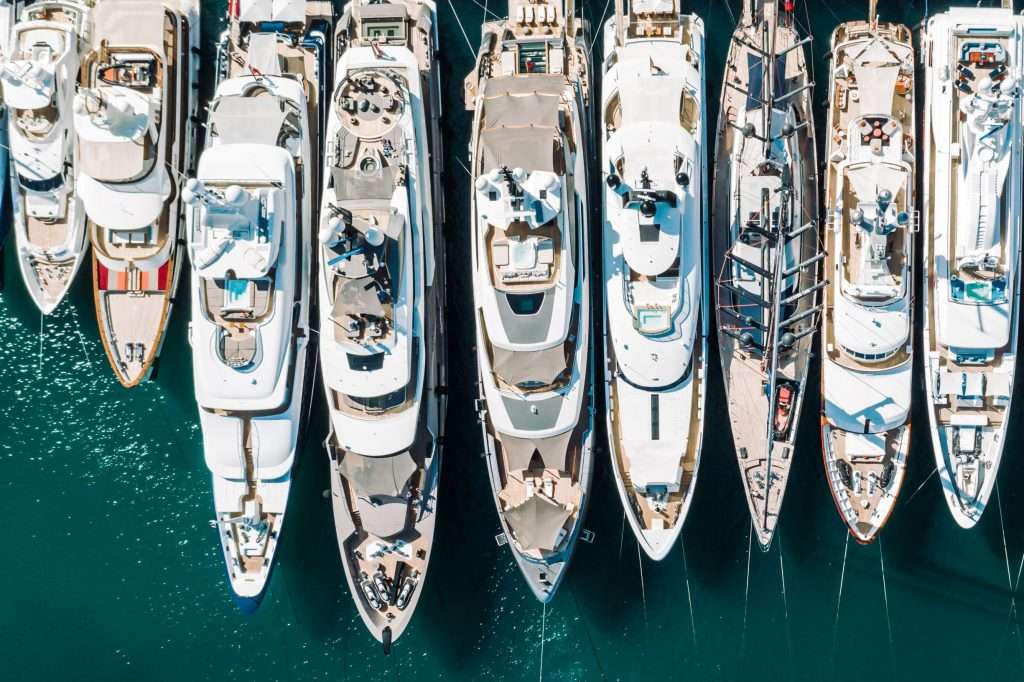 To own a superyacht staffed with full time crew is a glorious thing. It is also time consuming and requires rigorous attention to detail. Antoine Larricq, one of the longest serving yacht brokers in the superyacht world, says that the dynamic of the client-broker relationship is changing to family office-broker relationship, in part to deal with the complexity of superyacht ownership.

Family offices are private wealth managers and luxury concierges serving the needs of a wealthy family.

“When you are buying a boat, you have liability (issues), crew, exposure (to risk) – there is a whole structure around that as well,” Larricq says. “The individual can no longer get involved with all of that. Family offices are made up of accountants, lawyers and other professionals.” Larricq says that brokers such as himself, with knowledge spanning the industry, are increasingly working alongside family offices to handle the business side of superyacht ownership. 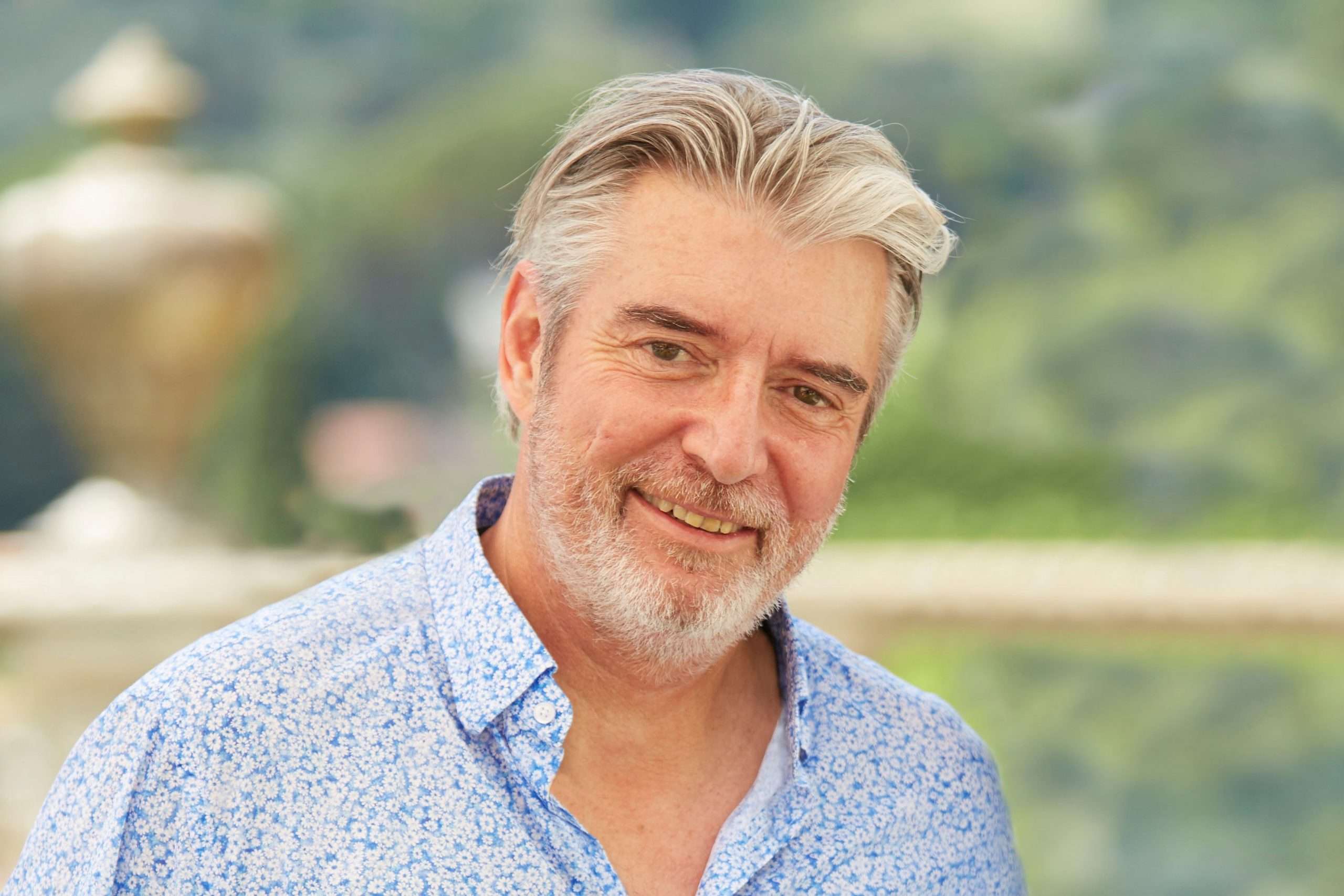 Larricq points out that Fraser Yachts is currently managing several fleets of yachts in partnership with the family office of a single owner. “A superyacht is a business,” Larricq says. “People have their lives attached to it.”

Though Larricq is based in the South of France, he has a long history in Asia.

In the early aughts, Larricq was a regular visitor to Asia, exploring the nascent China and Hong Kong markets. “It was interesting; that was a time in my life when I was selling 25 to 45-metre yachts,” Larricq says. In 2003, he started the Monaco office of Simpson Marine, a Hong Kong-based yacht dealership and broker with an enormous Asian footprint. “I was the antenna (for Simpson Marine) in the South of France,” Larricq says, adding that he wants to spend more time in the region.

The challenge for brokers and Asian buyers of superyachts is the relative lack of choice. Most superyachts are based in the Mediterranean, requiring regular travel for both parties.

There are more people who want boats at every level, from dinghies to superyachts and megayachts

There have been reports of the brokerage market for superyachts tightening, as prospective owners have jumped at pre-owned superyachts. “There are more people who want boats at every level, from dinghies to superyachts and megayachts,” says Larricq, who confirms that the market for yachts is indeed buoyant.

Larricq notes that Italian superyacht builder Benetti has 34 boats in construction now, with 17 yachts at 50 metres or more in length. He reports that people at Ferretti Group have said the yard is having its best turnover since 2006. In the Netherlands, Amels, Heesen and Feadship report very strong order books.

“It’s probably a little bubble at the moment,” says Larricq, noting the rising stock markets over the past year. He says there are not enough quality, pedigree superyachts on the brokerage market now, and shipyards are all booked up. That said, prices for pre-owned superyachts are not rising, but Larricq says existing owners are getting (rightfully) firmer on prices.

What contributes to good value in a pre-owned yacht? For Larricq, the key thing to look for is ownership history. A yacht that has had a long-term owner and long-term captain are particularly good signs that the yacht has been loved and maintained properly.

What contributes to good value in a pre-owned yacht? For Larricq, the key thing to look for is ownership history 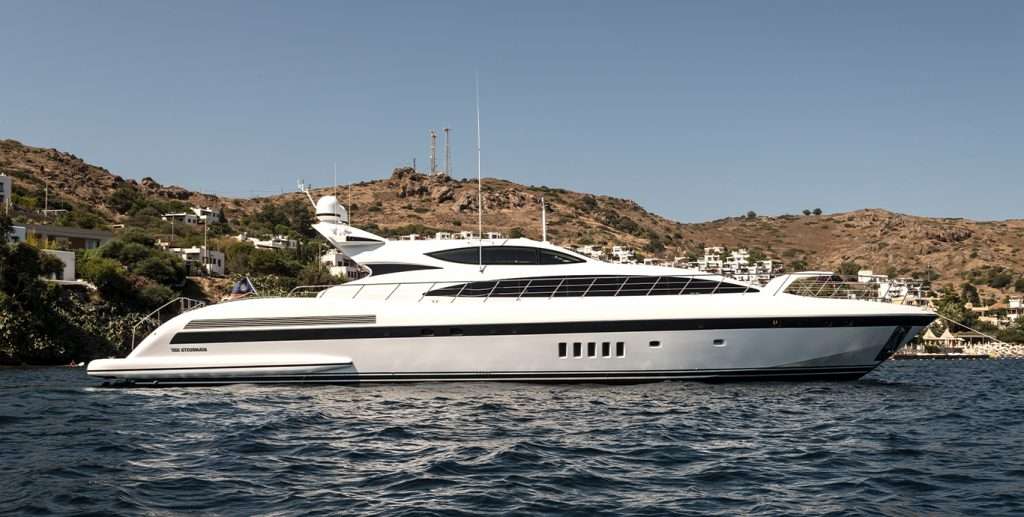 The 2018 Danush by Overmarine, with cruising speed of 28 knots 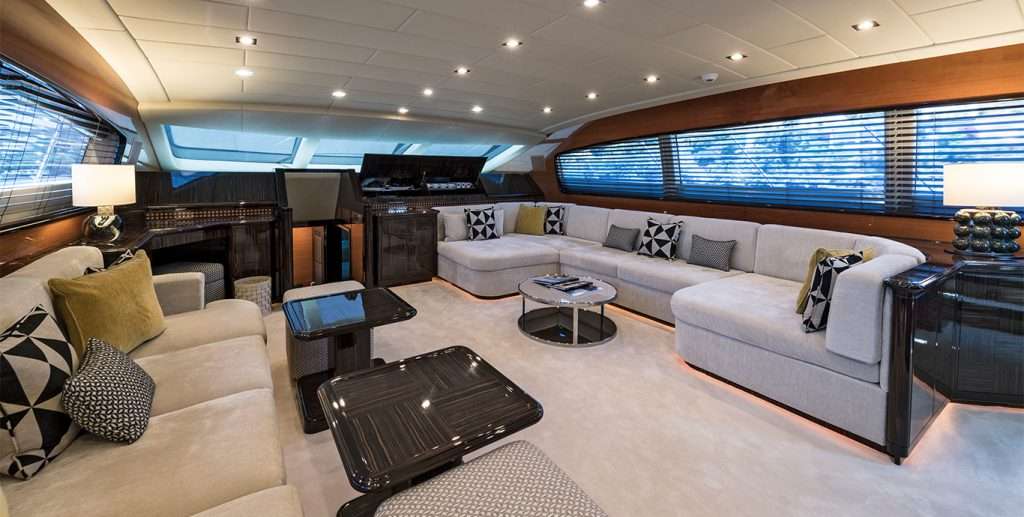 The spacious main lounge of Danush

Larricq is currently representing six superyachts, all of which seem to offer something different for a potential buyer. There is the 31.5-metre Danush, a sleek, fast Italian-built Mangusta yacht, offering top speeds over 30 knots on her water jet engines. 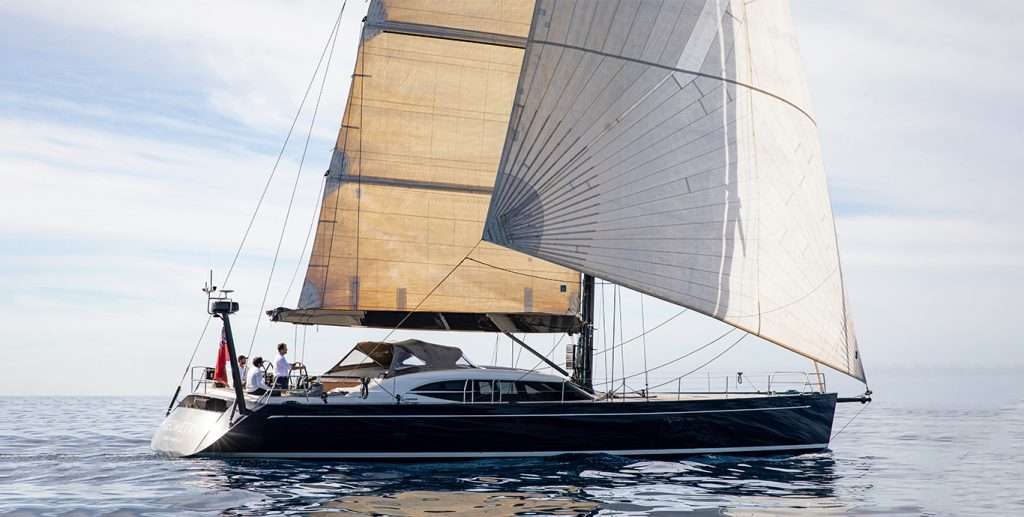 For sailing enthusiasts, there is Geometry, a 22-metre speed machine built in carbon composite yet featuring all the amenities for family trips. 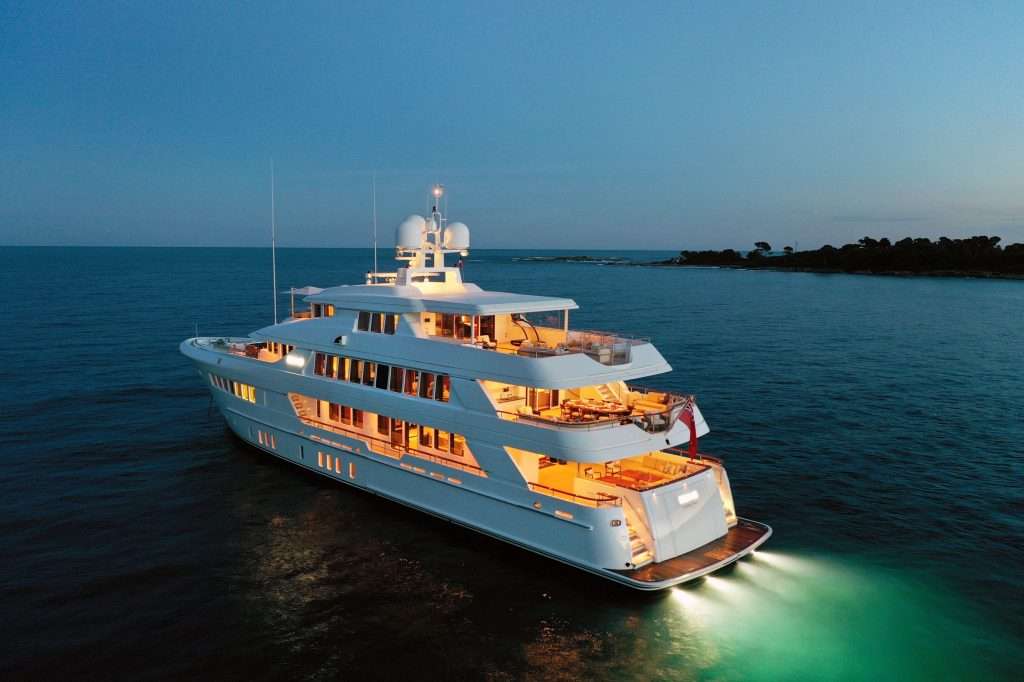 The Dutch-built Mirgab VI is capable of global cruising

The 49-metre Mirgab VI is what Larricq considers a “beautiful example” of a Dutch boat – good for going to sea (“A strong vessel!”), fabulous detailing and very refined, and still owned by the original buyer and with a long-term captain. 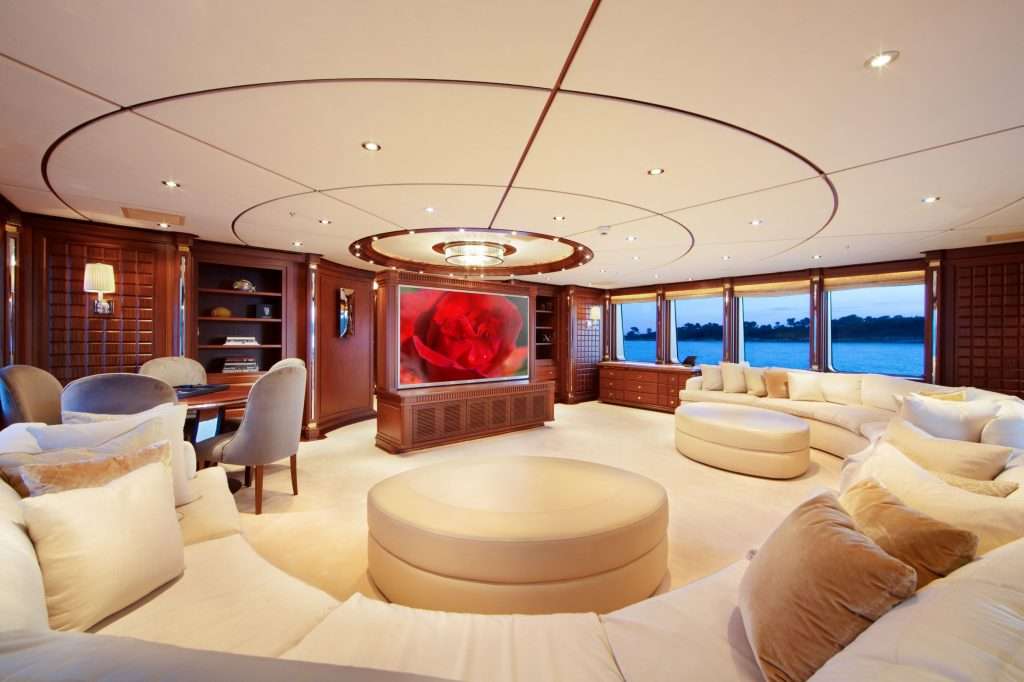 Mirgab VI can handle heavy seas and as trans-Atlantic range, making her a potential explorer vessel. The upper sun deck is an owner’s stateroom, which has a huge private terrace at the back and two VIP cabins on the bridge deck. There are large windows everywhere, which Larricq says was a trend-setting feature when the boat was launched in 2010. 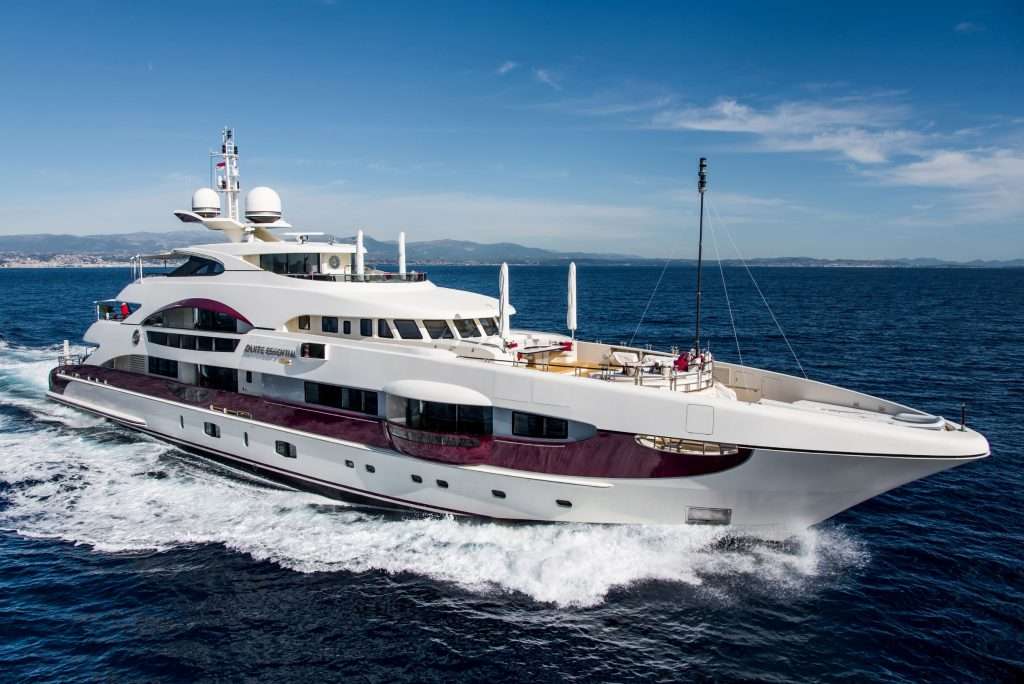 Perhaps most intriguing is the 55-metre Quite Essential, a Heesen displacement superyacht whose distinctive coloring makes a splash wherever it goes. In addition to all the luxurious amenities, Quite Essential has an aft-deck waterfall into her large swimming pool and a limo-tender with floated tender bay, like in a James Bond movie! Built in aluminium, the yacht can reach a top speed of 24 knots and has a maximum range at eco-speed of 5,000 nautical miles.

Will Larricq make return to Asia, post-Covid? Now 60, Larricq spends his spare time as a shepherd in the mountains near his home and has found the lack of air travel to be a comfort in the age of lockdowns. But the lure of Asia’s great destinations and burgeoning population of ultra-high net worth individuals may be too much to ignore. He says he is all too happy to make new trips to meet potential clients.

“I find the region fabulous; I would love the opportunity to meet some people there.” Larricq says he has not visited Asia since 2014, but that could change if more buyers from Asia enter the market for quality superyachts via new family offices. “My work has always been a way of traveling.”